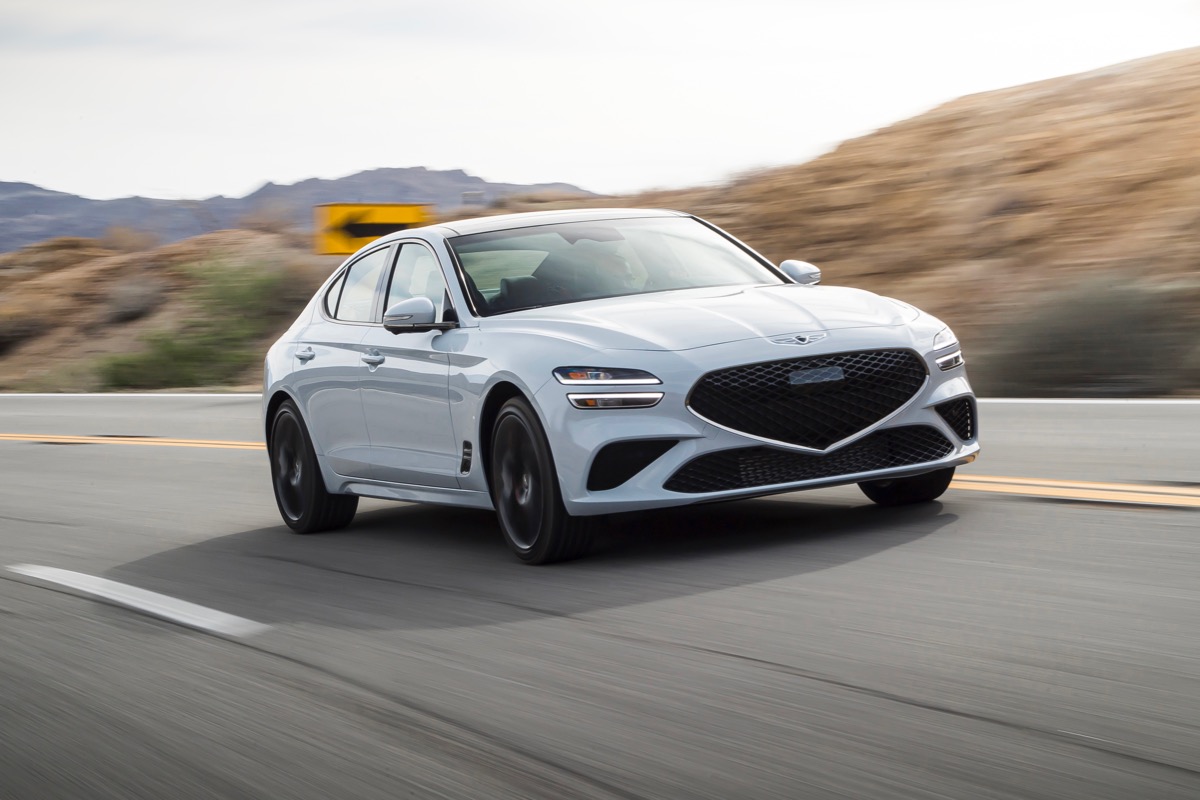 Built to compete with the world’s best luxury sport sedans, the refreshed 2022 Genesis G70 gets the recipe mostly right. 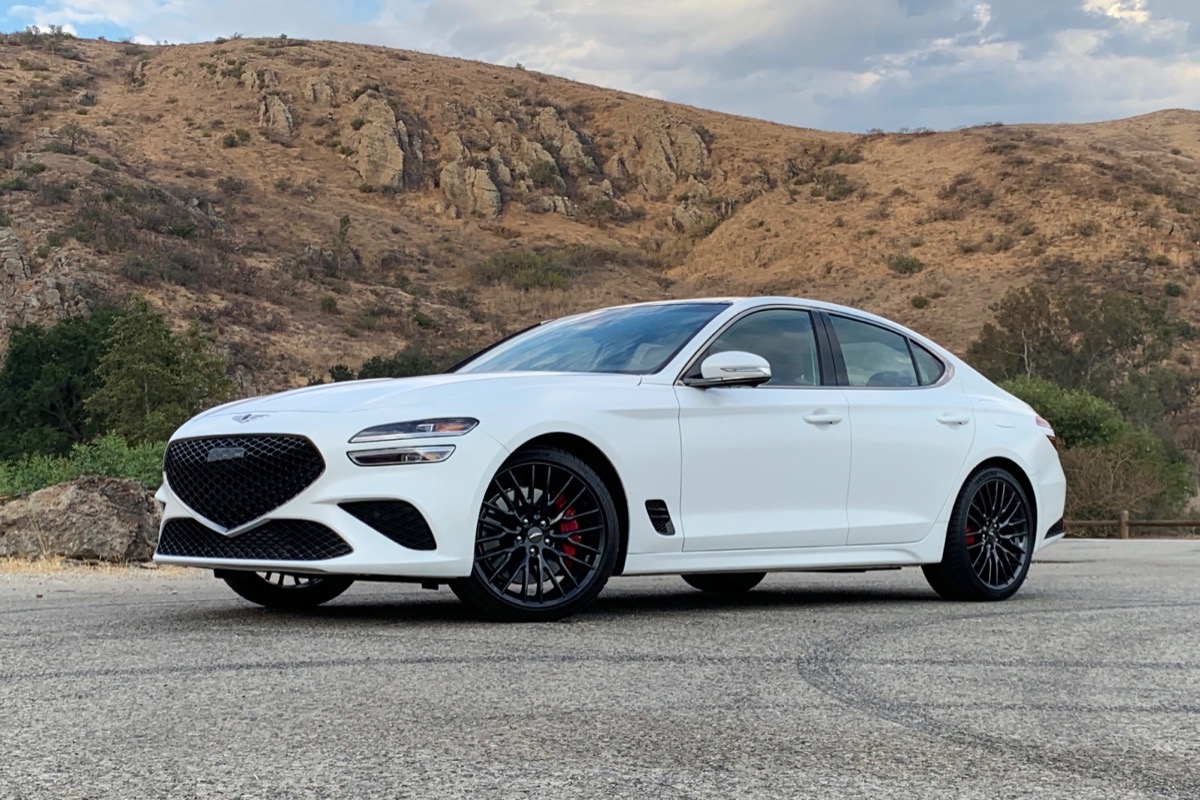 At first tentative and now tenacious, Genesis has finally gone all-in on luxury cars and SUVs designed to a distinctive theme. The Korean automaker’s smallest model, the G70 sedan, is just three years old now, but nevertheless gets new styling for the 2022 model year. The luxury brand also repackages the 2022 G70 model lineup, installs an improved infotainment system, and adds a new driver-assistance feature called Highway Driving Assist for the new model year. The six-speed manual gearbox, however, is canceled. 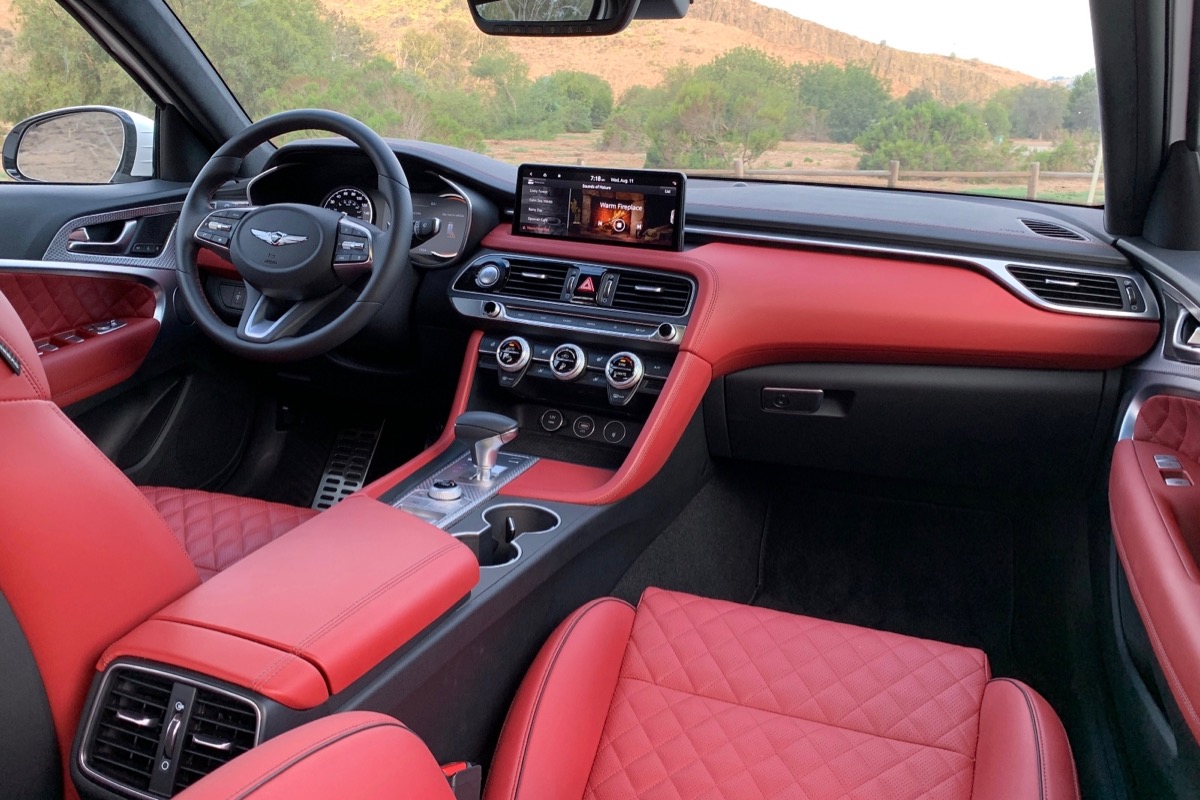 Critically acclaimed by automotive experts and Genesis owners alike, the G70 is considered a legit rival to enthusiast-oriented sport sedan competitors such as the Alfa Romeo Giulia, Audi A4, BMW 3 Series, Cadillac CT4, Lexus IS, and Mercedes-Benz C-Class.

For 2022, the Genesis G70 comes in 2.0T and 3.3T model series, each featuring a standard level of equipment that you can enhance with option packages. A Prestige Package is available for G70 2.0T models, while the G70 3.3T offers access to Sport Advanced, Sport Prestige, and Launch Edition packages. Pricing starts at $37,525 before factoring in the $1,045 destination charge.

New styling aligns the G70 with the rest of the Genesis lineup, and the car looks great in person. Not only that, it attracts attention on the road. At one point during our time with the car, a Porsche Cayenne packed with bros craning their necks to get a better look at the G70 shadowed us as we drove down a Los Angeles freeway.

Inside, the Launch Edition’s rich premium leather, beautiful stitching, diamond quilting, and matching seatbelts gave the G70 a distinctive and bespoke appearance. Everything exudes quality, too, except for maybe the plastic used to construct the air vent vanes. If you’re familiar with Hyundai models, you’ll spot some shared bits and pieces, but this is not a criticism.

Controls are logically laid out, and the infotainment system is easy to use. Again, if you’ve been in a new Hyundai recently, you’ll spot the graphic similarities on the system’s screens. The electronic shifter takes some acclimation, and you must be deliberate about choosing Reverse gear. It appears Hyundai is trying to compensate for how easy it might otherwise be for the driver to unintentionally bump the gear selector.

Overall, the new G70 looks, smells, and feels like a proper luxury sedan. And, for the most part, it drives like a true sport sedan. 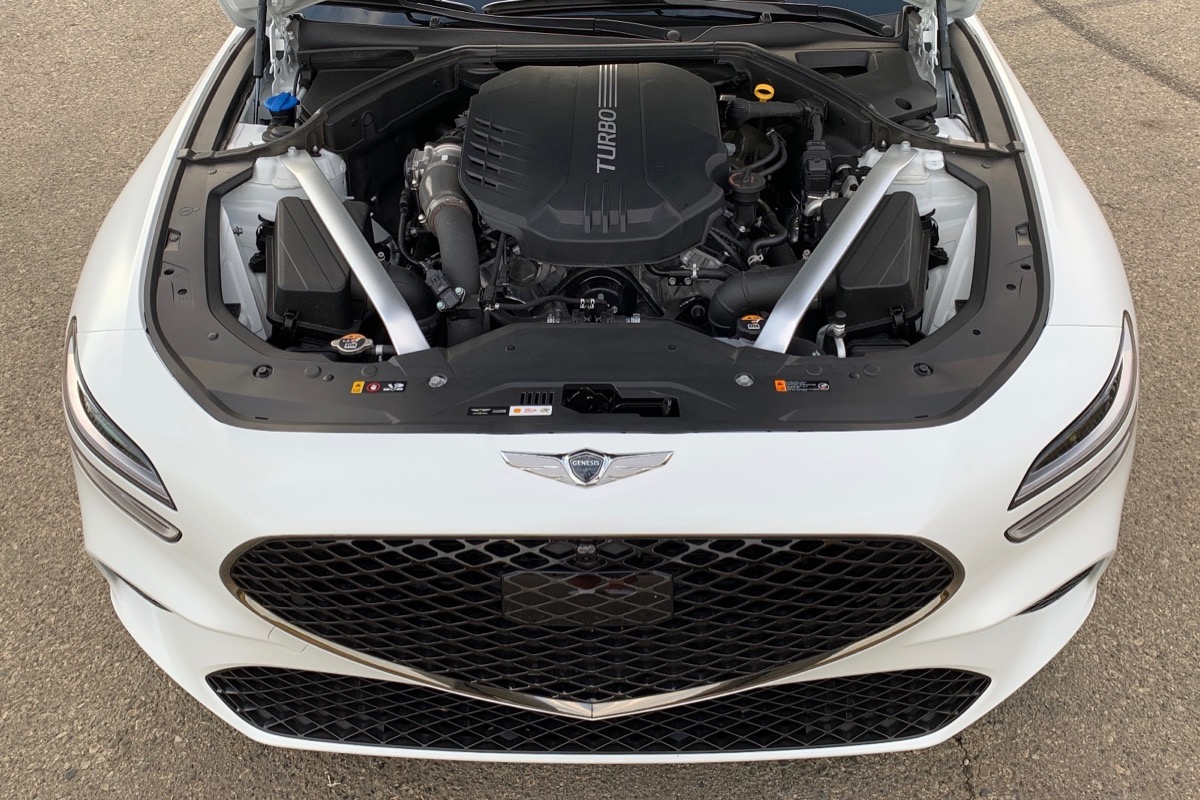 Choose the G70 2.0T and your new car will have the base engine, a turbocharged 2.0-liter inline four-cylinder engine good for 252 horsepower and 260 pound-feet of torque. These are competitive measurements in the G70’s class, but for maximum performance, you’ll want the G70 3.3T. It features a twin-turbocharged 3.3-liter V6 generating 365 hp and 376 lb-ft of torque, which is more than enough for this small sedan.

Rear-wheel drive (RWD) is standard with both versions of the G70, and all-wheel-drive (AWD) is an option. For 2022, an eight-speed automatic transmission is the only way to go. Genesis dropped the previously-available six-speed manual transmission because so few customers wanted it.

Since the 3.3T Launch Edition includes the contents of the Sport Prestige option package, our RWD test car had a limited-slip differential with torque vectoring and upgraded "performance" brakes. The former feature did not prevent the car from drifting a bit when powering out of hairpin turn, while the latter called into question Genesis' interpretation of the word "performance." But more on the dissatisfying brakes in a bit.

Acceleration is intoxicating, making the G70 3.3T a real rush to drive. The engine never feels winded, and it revs like there is no limit to the available power and velocity. As you’re pushed firmly back into the driver’s seat, a terrific engine note accompanies every deep press of the accelerator pedal.

As long as you don’t become addicted to the 3.3T’s zoom factor, you should get 21 mpg in combined driving, according to official EPA fuel economy ratings. We got 20.1 mpg on the testing loop, an impressive result given how often we dipped into the car’s deep well of power.

The eight-speed automatic transmission pairs well with the twin-turbo V6. And it works best in the car’s Comfort or Sport driving modes. In the new Sport+ drive mode, the G70 holds revs for too long and is too loud and obnoxious about it. Paddle shifters provide manual control over the transmission, but in Sport mode, they don’t match revs as eagerly as we’d prefer.

Quick, precise steering adds to your driving enjoyment, and if you get on the power too hard and too early after exiting a hairpin turn, the G70’s rear end will slide out, but in a controlled manner. If you don’t wish to experience this, get the nose straightened out before getting on the gas. Or choose the AWD version of this car.

All of these aforementioned traits make the G70 3.3T a blast to drive. Unlike its calm, cool, and collected German competitors, the Genesis is raw and emotional, making it a greater dynamic thrill ride. But, you cannot hustle this car like you can a BMW or a Benz, because, based on our experience, the Brembo brakes are not up to the task of serving a serious sport sedan. And yes, this is surprising given Brembo's reputation.

The first hint of trouble occurred at the bottom of California’s Conejo Grade. This downhill section of the 101 freeway leads from the Thousand Oaks area to Camarillo, and by the time the G70 reached the bottom of the grade the brakes had heated to the point where they were rumbling and pulsating. We’d been running the car’s Highway Driving Assist technology for miles, so this behavior cropped up without any driver input.

Because of this heating problem on the Conejo Grade, we knew to descend Deer Creek Canyon Road in Malibu with extra care. Sure enough, when driving the G70 3.3T in the way we presume Genesis intends, the brakes began to rumble, to pulse, and to smell awful. Oddly, though, they didn’t exhibit much in the way of fade, retaining their bite all they down to the beach.

While driving and experiencing this braking behavior, we figured the test car had seen some previous abuse. But with less than 2,000 miles on the odometer and tires that appeared to be in great shape, that seems unlikely.

In any case, this observed braking component behavior did not instill trust in the car, in turn having a negative effect on driving enjoyment. If you can’t count on the brakes, you can’t have confidence in the car. 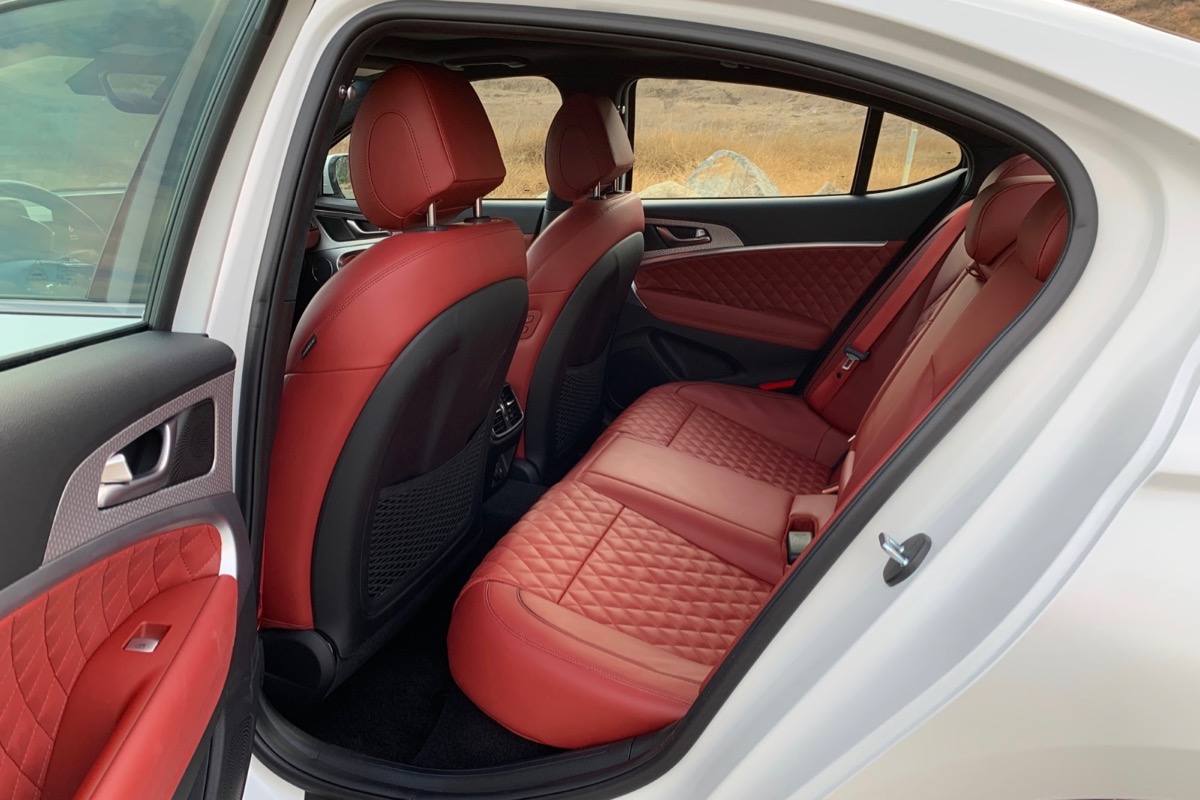 Cramped rear-seat room has always been a commonly cited—and valid—criticism of the Genesis G70. If ever a four-door sedan existed that could rightfully be called a coupe, it must be the G70.

Gracefully entering and exiting the G70 takes some dexterity. It’s easy enough in front, but getting yourself into and out of the back seat requires serious Jenga skills. The hard plastic front seat backs don’t help, either. With soft padding, adults might be more willing to ride in the back.

Comfort is easy to come by in the front seats, though the G70 remains a snug fit. Lined in premium stitched-and-quilted Sevilla Red leather, and equipped with a black simulated suede headliner, our G70 3.3T Launch Edition test car sure looked luxurious inside.

It felt that way, too, the comfortable heated and ventilated front seats standing ready to combat temperature extremes. Switch into Sport or Sport+ mode, and the front seat bolsters automatically swell in preparation for holding you and your passenger in place. You can turn this feature off if you prefer.

Storage space is decent for each seating position, but the G70’s trunk is relatively small, measuring just 10.2 cubic feet. It’s a shame the G70 doesn’t have a rear liftgate to provide more utility, similar to what you find on an Audi A5 or a BMW 4 Series Gran Coupe. But then, that purpose is served by the G70’s corporate cousin, the Kia Stinger. 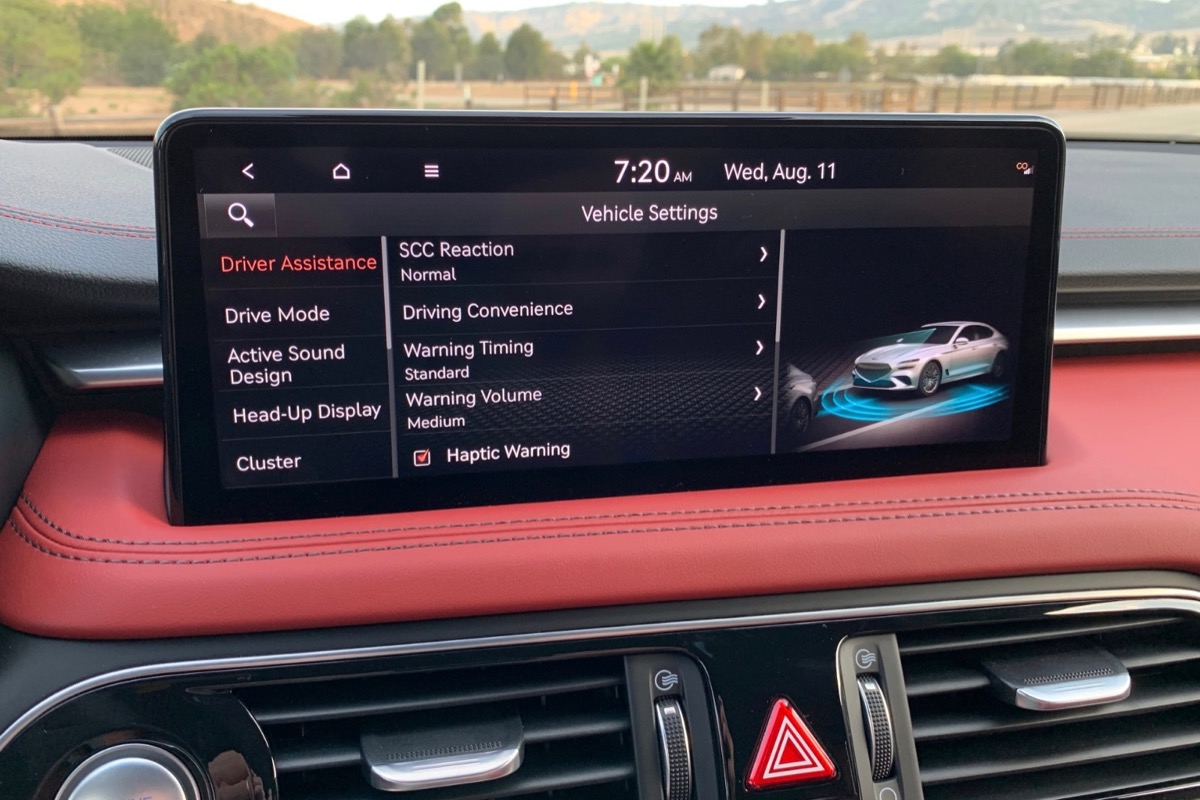 For 2022, the Genesis G70 gets a new infotainment system with a larger 10.25-inch touchscreen display. It’s running the same technology you’ll find in many Hyundai and Kia models, which is mostly a good thing.

Highlights include quick response to inputs, natural voice recognition, and over-the-air software update capability. Navigation is standard, along with satellite radio and both Apple CarPlay and Android Auto smartphone mirroring capability. However, these two features require a wired rather than a wireless connection.

During the evaluation, the Genesis G70’s infotainment system’s voice recognition technology proved fast and accurate. However, you cannot operate the climate control system by voice. The test car’s 15-speaker Lexicon premium sound system excelled when listening to classic 1980s hits like “In the Air Tonight” and “Faithfully.” But when listening to a modern alternative from The Marias, the bass seemed a little muddy.

Most G70s have wireless smartphone charging, with the pad tucked behind the shifter, and helping to explain why selecting Reverse gear is a deliberate process. Digital key technology is available to Android users, turning your smartphone into a key to operate the G70’s door locks and engine start button. A comprehensive head-up display is also available, but it is hard to see when you’re wearing polarized sunglasses. 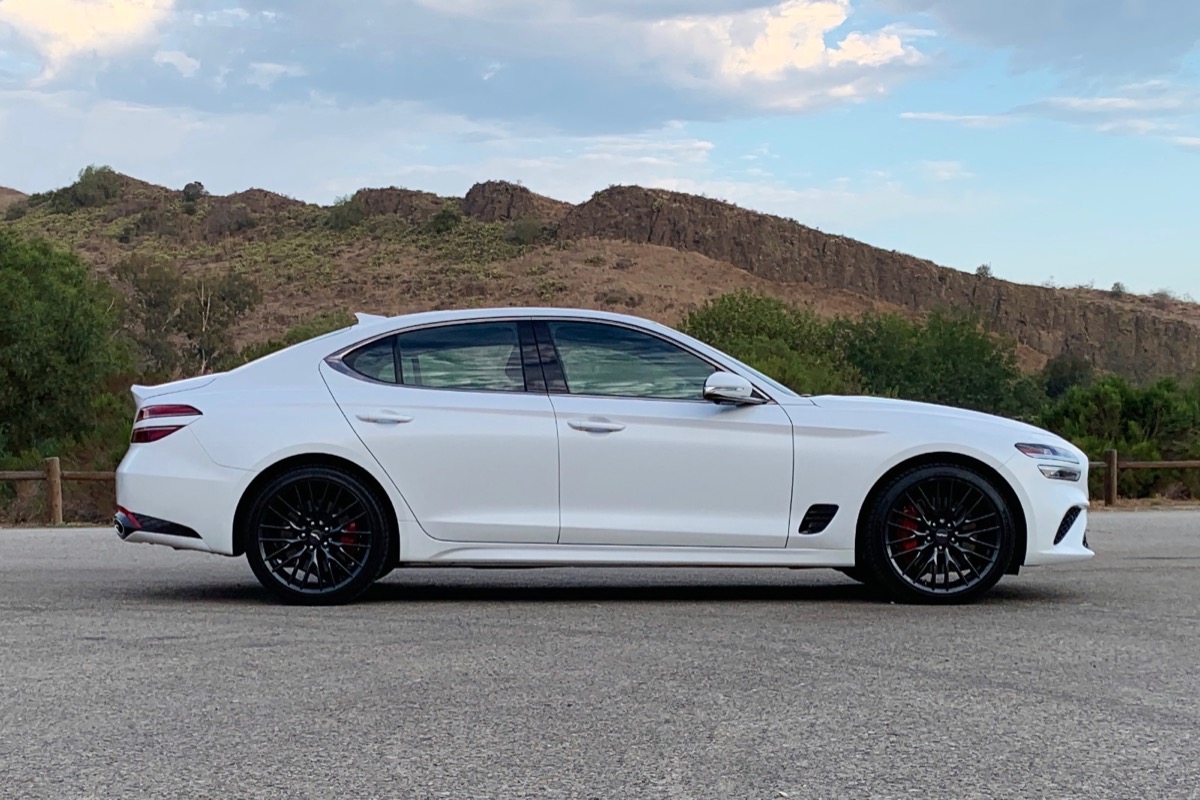 Genesis equips every G70 with a long list of safety features, including adaptive cruise control, forward-collision warning, automatic emergency braking, lane-departure warning, lane-keep assist, lane-centering assist, blind-spot monitoring, and rear cross-traffic alert. In addition to collision-avoidance tech, the G70 features a rear-seat reminder system and a Safe Exit Assist system that warns occupants not to get out of the car if it is unsafe to do so.

The star of the show is the standard Highway Driving Assist system, which combines adaptive cruise control with lane-centering assist. It works better than many similar technologies, making it an effective tool for long-distance travel. However, in traffic, the G70 can’t come to a stop for more than a few seconds before the driver must manually resume Highway Driving Assist.

Genesis offers a couple of helpful visibility aids for the G70. A high-definition 360-degree camera system helps when parking, while a Blind-Spot View Monitor supplements the traditional blind-spot monitoring system with cameras on both sides of the car. When the driver activates a turn signal, this feature shows what’s on either side of the G70 on a display nestled into the digital instrumentation.

As far as crash protection goes, the Insurance Institute for Highway Safety (IIHS) gives the 2022 G70 high marks, but rates the headlights as “Marginal” in terms of performance. This prevents the car from earning a “Top Safety Pick” rating.

The National Highway Traffic Safety Administration (NHTSA) has not rated the G70 for crashworthiness. 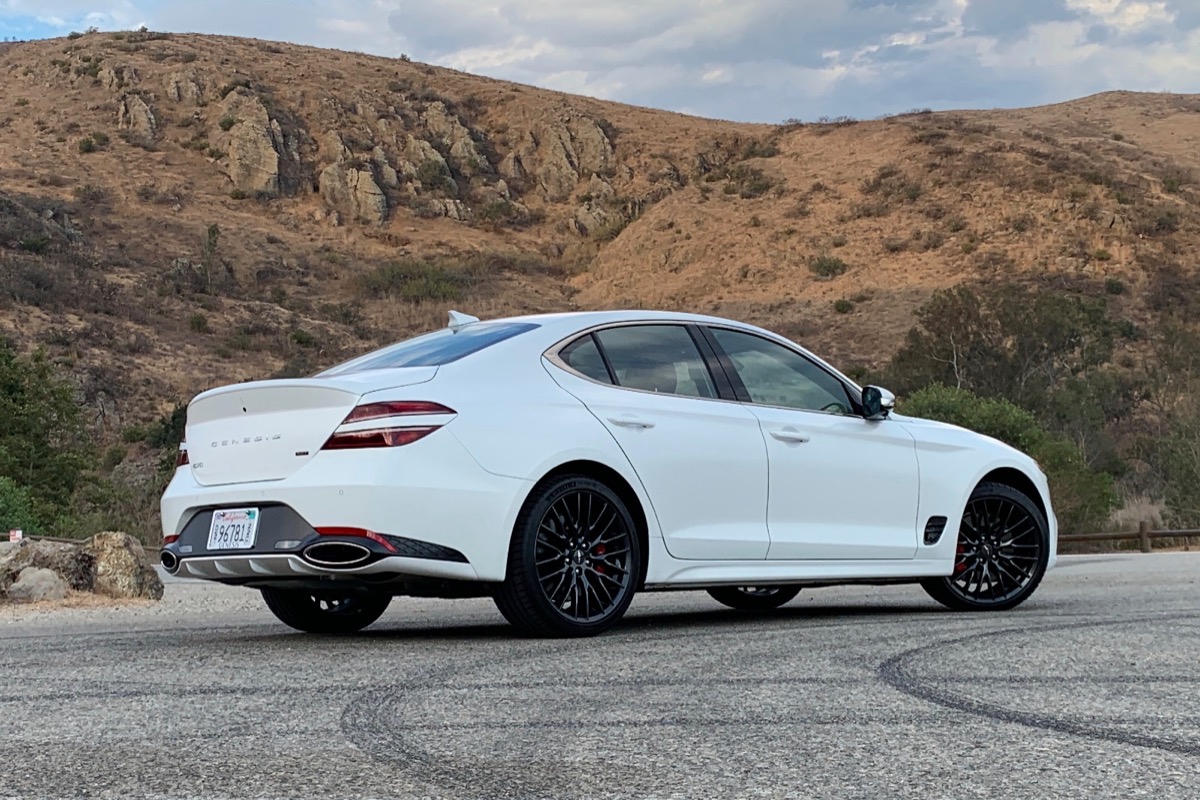 Despite a handful of flaws, the 2022 Genesis G70 offers such stunning value that you can easily forgive them. In addition to a price tag that significantly undercuts the competition, Genesis offers long-term warranty protection combined with appealing owner services such as Service Valet. You also get three years of complimentary connected services and scheduled maintenance.

The good news is that Genesis doesn’t offer these value-rich perks in order to make up for an inferior product. Aside from its cramped back seat, small trunk, and sketchy brakes, it’s a terrific luxury sport sedan. Plus, it’s a relative rarity on the road, which means you won’t see yourself coming and going everywhere you drive.

Perhaps with the money you save, you can upgrade to a good set of aftermarket brakes.

Momoftwins2 Love my Genesis G70. I will agree, the rear seating is tight and rough on passengers during long distances. Beautiful car, get lots of compliments.

Enter your zip to see incentives for a new G70 in your area.