Looking for a New Volvo V60 in your area? 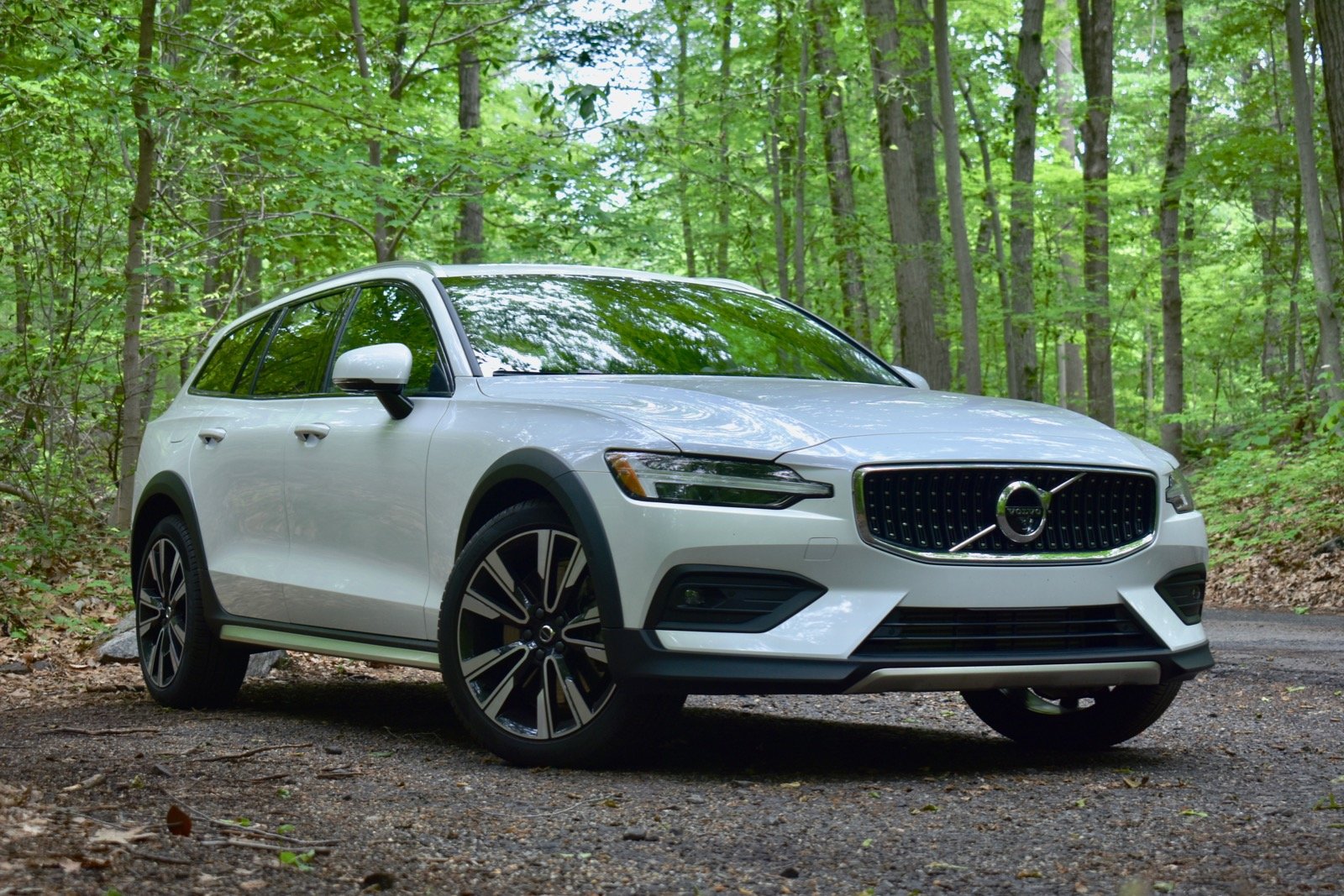 Station wagons are to Volvo what pickup trucks are to Ford or Chevrolet. They’re this automaker’s bread and butter, vehicles that are integral to the Volvo brand and that represent a comfort zone for the Swedish automaker’s designers and engineers.

So while wagons have been declining in popularity for decades, Volvo has stuck with them. The current-generation Volvo V60 was introduced for the 2019 model year as the wagon companion to the Volvo S60 sedan. Its closest competitor is the Audi A4 Allroad, a similarly-sized wagon from another luxury brand. Given the lack of choices, the V60 could also be cross-shopped against the larger Audi A6 Allroad and Mercedes-Benz E-Class, as well the Subaru Outback, which lacks a prestige badge but fills a similar functional niche.

Because the V60 is relatively fresh, it gets no significant changes for the 2021 model year. Volvo offers the standard 2021 V60 in Momentum, Inscription, and R-Design trim levels but also has two spinoff versions of the wagon. The V60 T8 Polestar Engineered sports a plug-in hybrid powertrain, while the Volvo V60 Cross Country gets more SUV-like styling. We tested a Cross Country for this review. 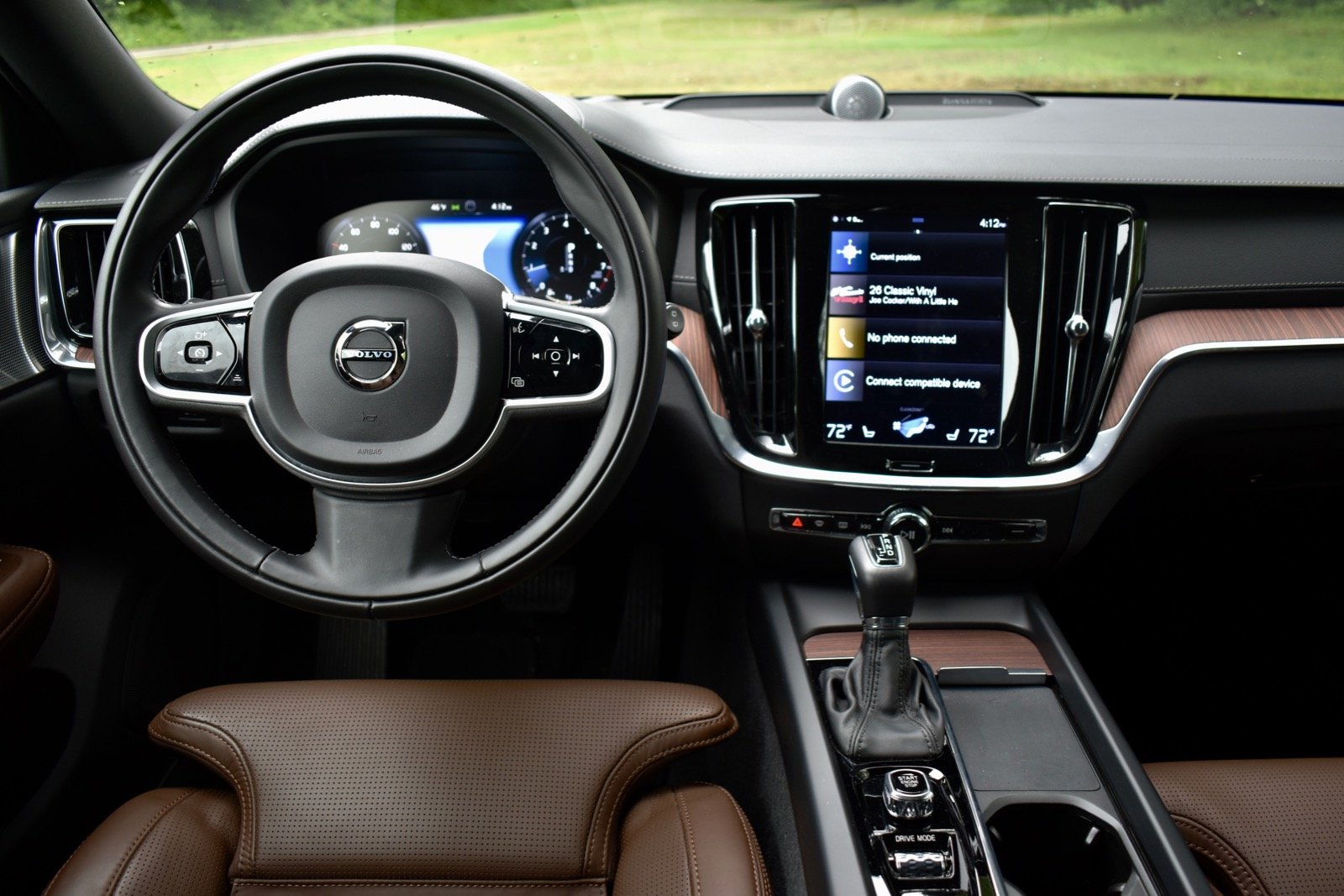 Volvo was once known for conservative styling, exemplified by the relentlessly square exteriors of past Volvo wagons. Like other recent Volvo models, though, the V60 underwent a dramatic makeover with its last redesign. The V60 is now as stylish as a station wagon can be, but still recognizably a Volvo.

The traditional two-box wagon shape is livened up by LED headlights with “Thor’s Hammer" daytime running lights, a more streamlined version of the traditional Volvo grille, and taught body lines. These styling features carry over from other recent Volvo models, but work particularly well with the V60’s dimensions, in our opinion.

The V60 also shares the Volvo Scalable Product Architecture (SPA) platform with many other Volvo models, including the aforementioned S60 sedan and XC60 crossover, as well as the larger Volvo V90 wagon, S90 sedan, and XC90 crossover.

Wearing a badge that dates back to 1997, the V60 Cross Country model gets plastic body cladding and a raised ride height (affording 8 inches of ground clearance, per Volvo) to give it a more rugged appearance. Audi’s Allroad models, the Mercedes-Benz E450 4Matic All-Terrain, and the Subaru Outback follow a similar formula. Other V60 trim levels get their own, less dramatic styling cues, including a sportier motif for the R-Design and Polestar Engineered, and extra chrome for the Inscription.

The interior design is an excellent balance of luxury and functionality. From the matte-finish wood trim to the Nappa leather upholstery, everything in our Cross Country test car looked upscale, but also durable enough for an outdoorsy lifestyle. The design was pleasingly restrained, but our tester still had all of the equipment you’d expect from a luxury brand, including massaging front seats, a heated steering wheel, a panoramic moonroof, and four-zone climate control. You have to pay extra for most of it, granted. 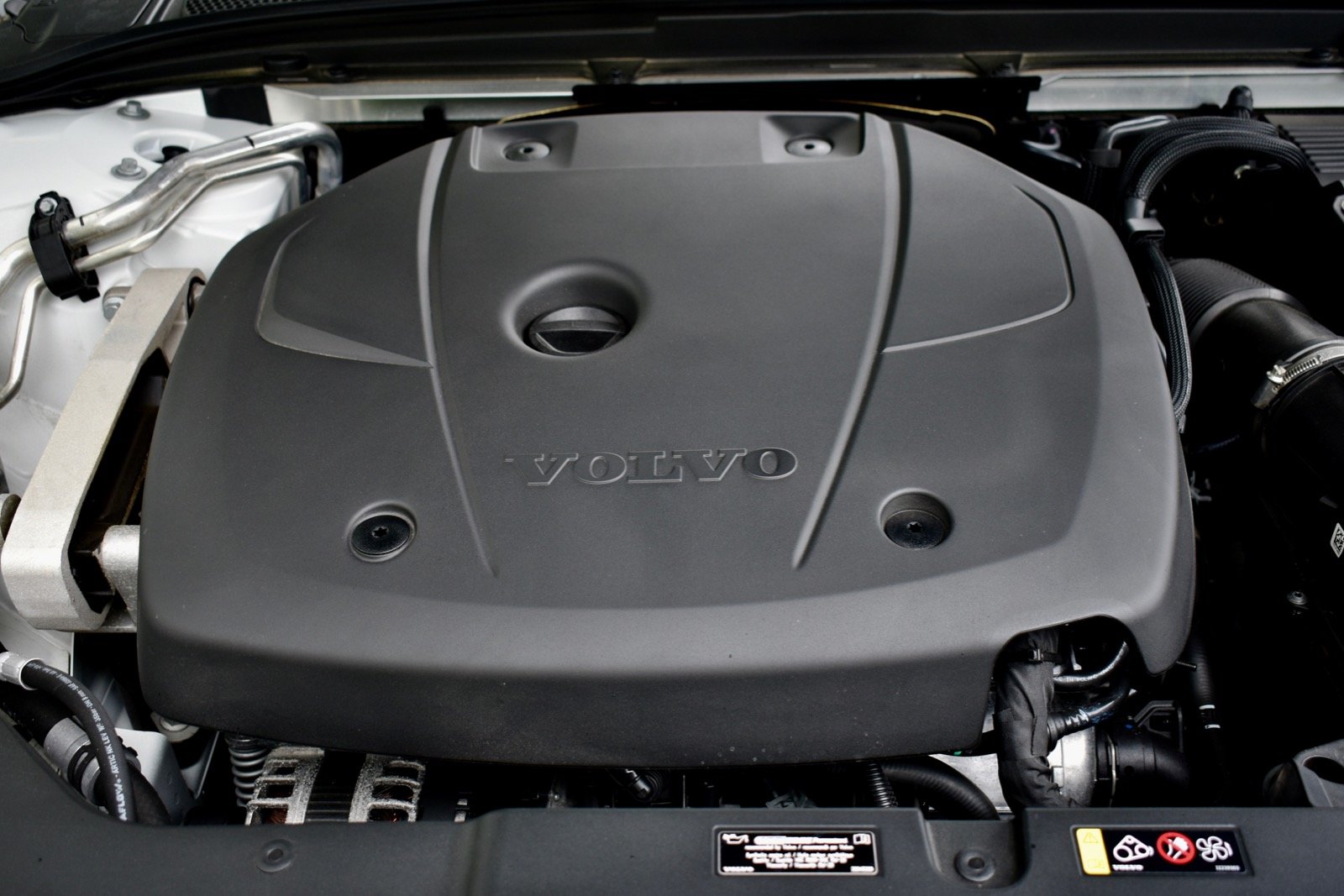 Volvo offers three distinct drivetrain options for the 2021 V60 wagon. The Momentum, Inscription, and R-Design models get the T5 powertrain, a 2.0-liter turbocharged four-cylinder engine making 250 horsepower and 258 pound-feet of torque. That engine is coupled to an eight-speed automatic transmission with front-wheel drive (FWD).

Cross Country models get the same T5 powertrain, but with all-wheel drive (AWD), while the V60 Polestar Engineered uses Volvo’s T8 plug-in hybrid powertrain. This combines a 2.0-liter four-cylinder engine that’s both turbocharged and supercharged with electric-motor assist, enabling AWD and a total system output of 415 hp and 494 lb-ft of torque.

As the numbers suggest, the Cross Country offers a more leisurely driving experience than the performance-focused Polestar Engineered. Despite its rugged looks, the Cross Country offered a comfortable ride and a quiet cabin, giving it a level of refinement that justified the premium price. While less powerful and less fuel-efficient, the T5 powertrain is also a bit nicer to live with, offering more linear response than the T8 plug-in hybrid powertrain.

Just don’t bother hustling a Cross Country down a backroad. Some cars encourage enthusiastic driving, others wither in the sight of it. This one ignores the driver’s rambunctiousness and just carries on. 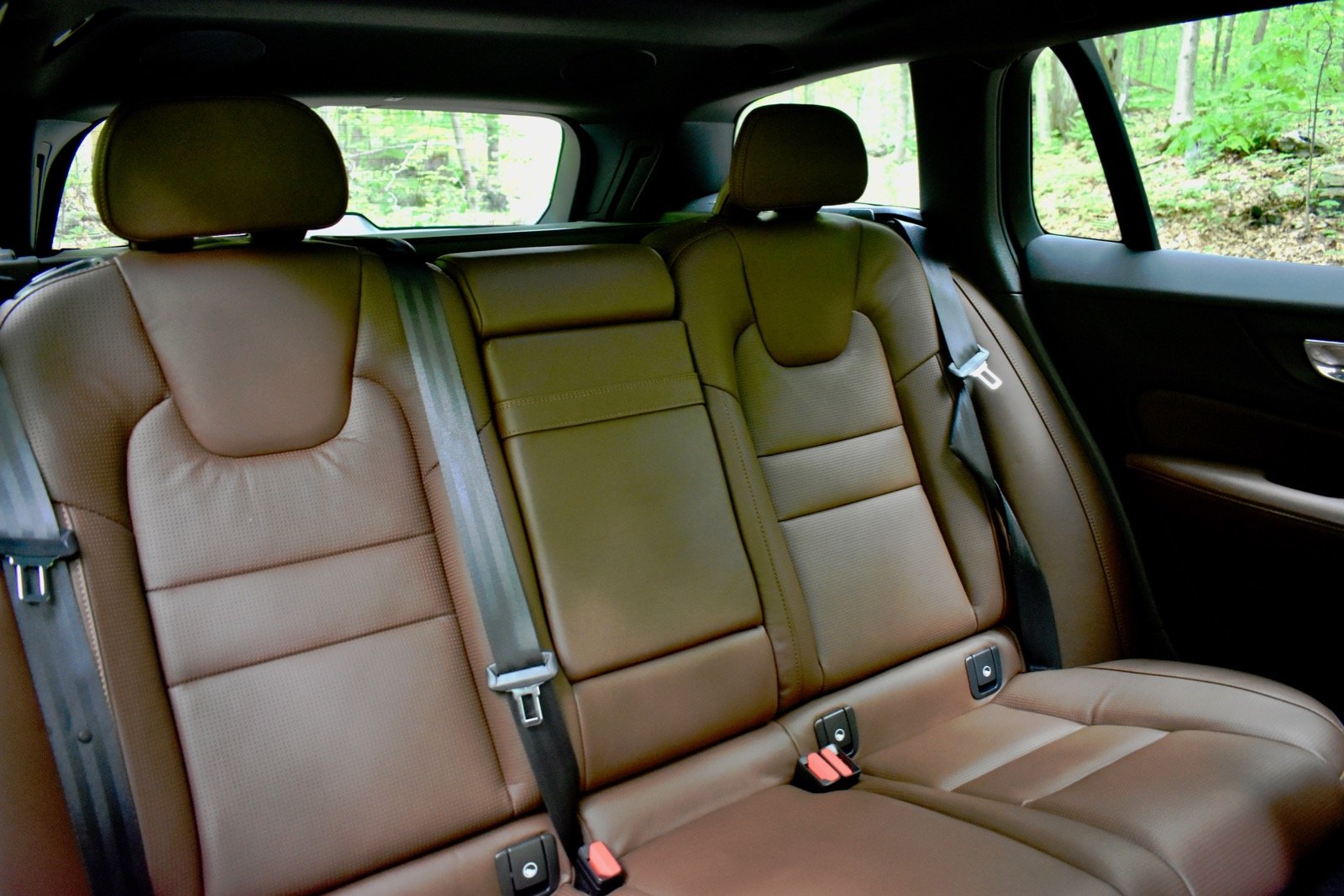 Among the handful of wagons still available, the V60 is closest in size, price, and intent to the Audi A4 Allroad. The Volvo has more rear headroom than the Audi and more front legroom. The driver and front passenger get more legroom than in the slightly larger Audi A6 Allroad and Mercedes-Benz E450 4Matic All-Terrain in fact. However, that comes at the expense of second-row legroom, where the A4 Allroad beats the Volvo.

At 23.2 cubic feet, the V60 also has less cargo space than the A4 Allroad with the rear seats in place. Audi doesn’t publish a cargo-capacity figure with the rear seats folded, but Volvo claims the V60 will hold up to 50.9 cubic feet of stuff. The Volvo wagon is also available with a foot-activated power liftgate.

New-car buyers have largely abandoned wagons in favor of crossover SUVs, so it’s also worth comparing the V60 to its XC60 sibling. The two vehicles are based on the same platform, are both part of Volvo’s mid-range “60” series, and are available with the same powertrains. The only difference is the body style.

In terms of passenger space, the V60 boasts more rear headroom and front legroom than the XC60, but the SUV has substantially more shoulder room, which should make it feel more spacious inside. The XC60 also offers more cargo space than the V60, at up to 63.3 cubic feet with the rear seats folded.

You’ll have an easier time parking the V60, though, thanks to better outward visibility from the lower-riding wagon, including a more upright rear window that affords a better view out the back. 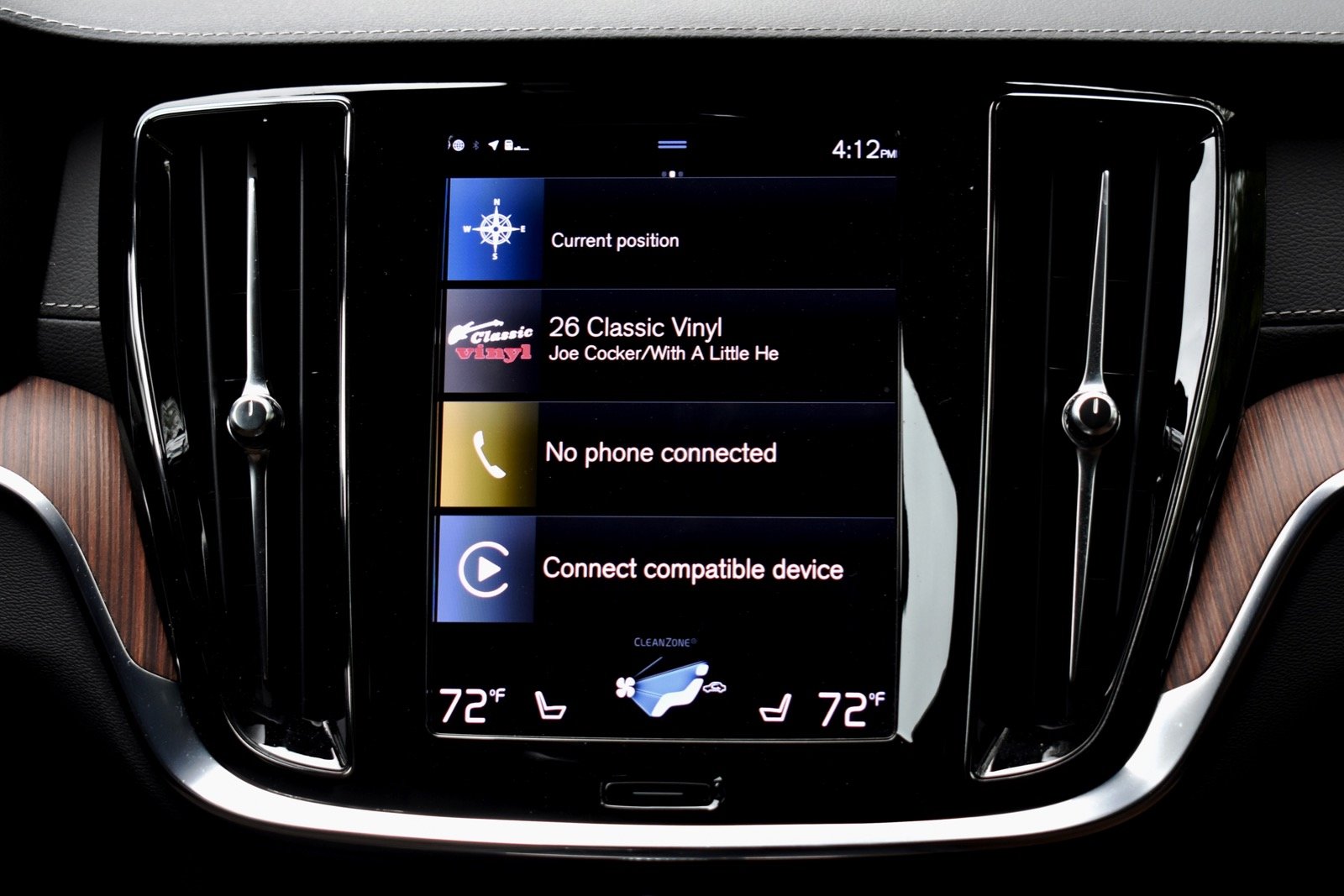 While other automakers appear to be in a touchscreen arms race, Volvo takes a more sensible approach. A 9-inch touchscreen isn’t very impressive in terms of size these days, but Volvo’s screen is among the easiest to use in the business. We particularly liked the ability to scroll up and down through the SiriusXM satellite radio channels list.

Volvo didn’t include many analog controls, which would normally be a problem, but the touchscreen-centric setup was so intuitive it didn’t really matter. The minimal number of buttons and knobs also contributed to the pleasingly clean look of the cabin.

Wireless smartphone charging is available, but the charging pad may be too small for some newer phones. Users of newer phones should also note that, while the V60 has two USB ports for each row, only the rear-seat ones are USB-C. The front gets USB-A only. 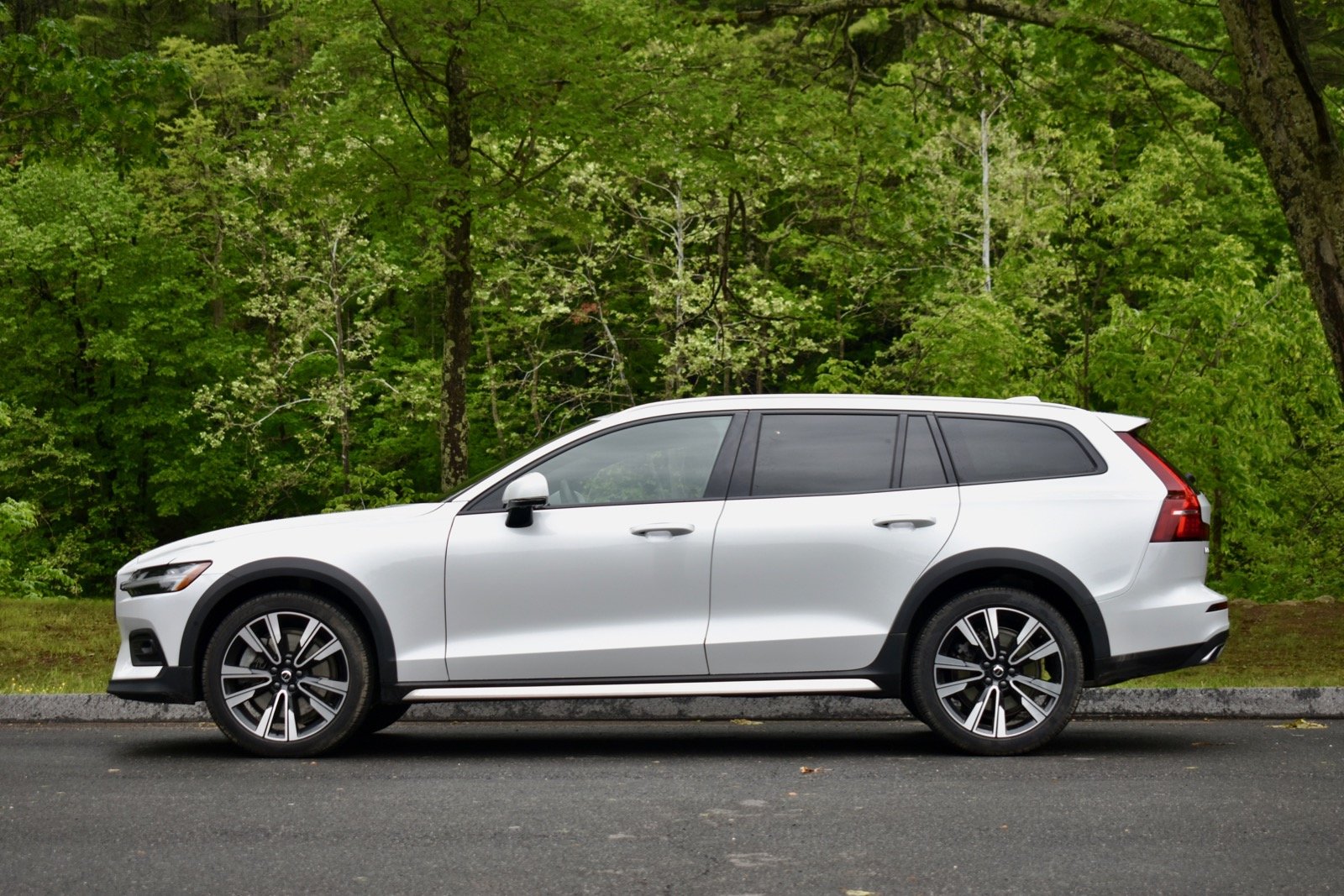 The 2021 V60 lives up to Volvo’s reputation for safety, earning the highest “Top Safety Pick+” rating from the Insurance Institute for Highway Safety (IIHS). The wagon received top scores in all IIHS crash tests, as well as top scores for headlights and front-crash prevention tech. The only blemish was a lower “Acceptable” rating for child-seat anchor ease of use.

Volvo offers an impressive array of standard safety features, including seats with energy-absorbing cushions and an anti-submarining design intended to keep occupants from slipping out of the seat belts. The V60 also gets Volvo’s Care Key, which allows the owner to limit the top speed when loaning the car to other people. All Volvos are also limited to 112 mph for safety reasons.

Options include a 360-degree camera system and Volvo’s Pilot Assist driver aid. Pilot Assist combines adaptive cruise control with automated lane centering for highway driving. While Pilot Assist is one of the best iterations of this tech we’ve seen, with smoother control inputs than most other comparable systems, it’s still fairly limited. It still has trouble keeping the car centered on some highway curves, for example. 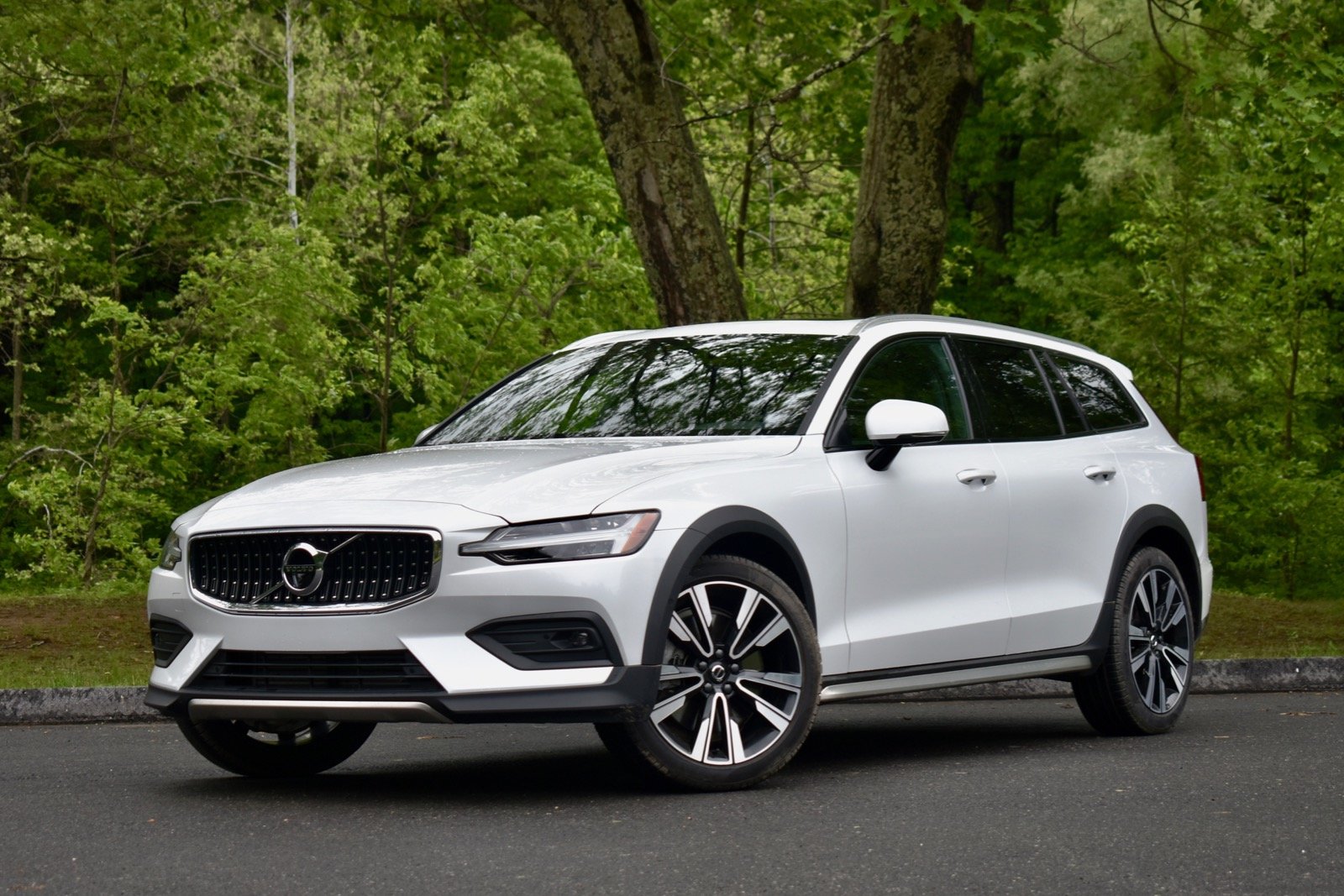 Those gas-mileage numbers are pretty good for a vehicle of this size, but the V60 T8 Polestar Engineered plug-in hybrid also offers 22 miles of all-electric range, with an efficiency rating of 69 MPGe combined. It also gets 30 mpg combined in hybrid mode.

Boasting standard all-wheel drive and model-specific styling features, our Cross Country test car had a $46,445 base MSRP. Options like Nappa leather upholstery, four-zone automatic climate control, massaging front seats, 19-inch wheels, and Pilot Assist (part of the Advanced Package) drove the as-tested price up to $58,090. Price inflation like that is typical of luxury brands, which are very stingy with equipment on base models. Volvo does better than most by making a lot of driver-assist tech standard equipment, at least.

It’s worth noting that the Subaru Outback performs basically the same function as the V60 Cross Country for significantly less, but the Volvo offers a greater level of refinement, interior quality, and available equipment. The Subaru is just a basic wagon. For extra money, the Volvo gives you something more. Isn’t that what luxury cars are all about?

Enter your zip to see incentives for a new V60 in your area.