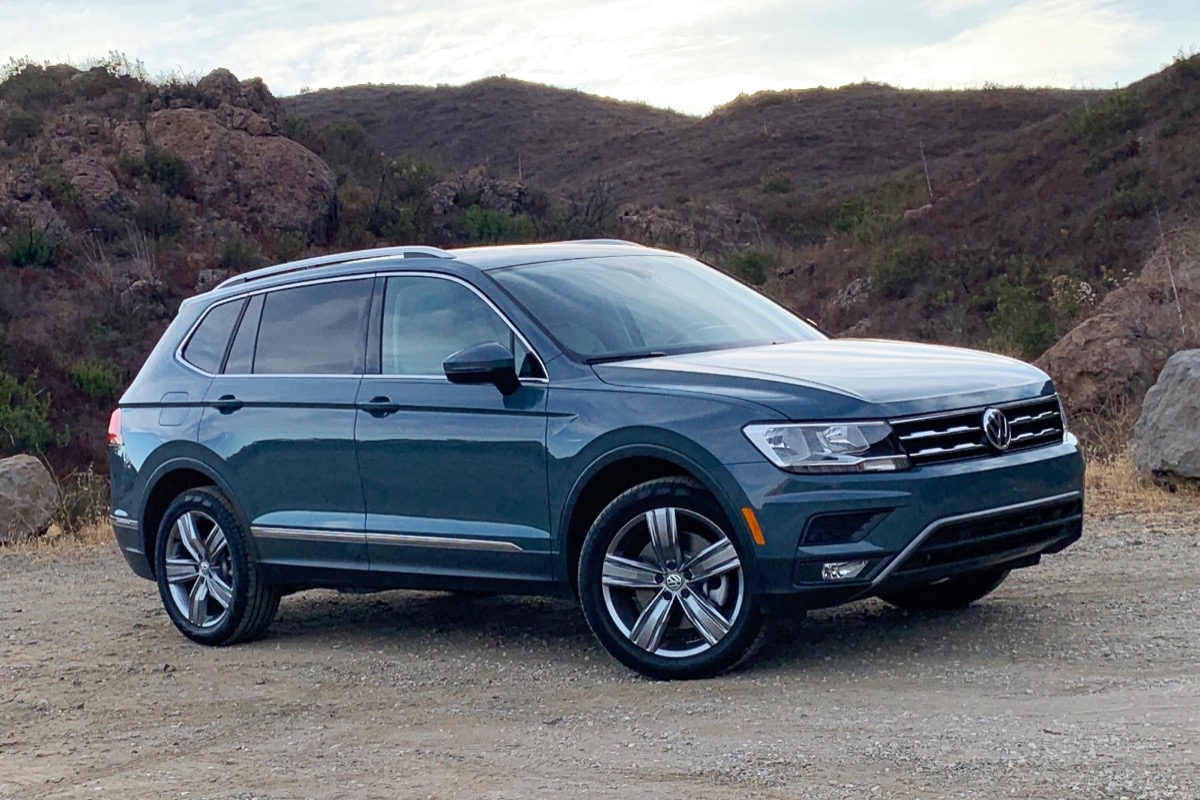 Looking for a New Volkswagen Tiguan in your area?

The 2021 Volkswagen Tiguan is VW’s best-selling model, and for good reason. 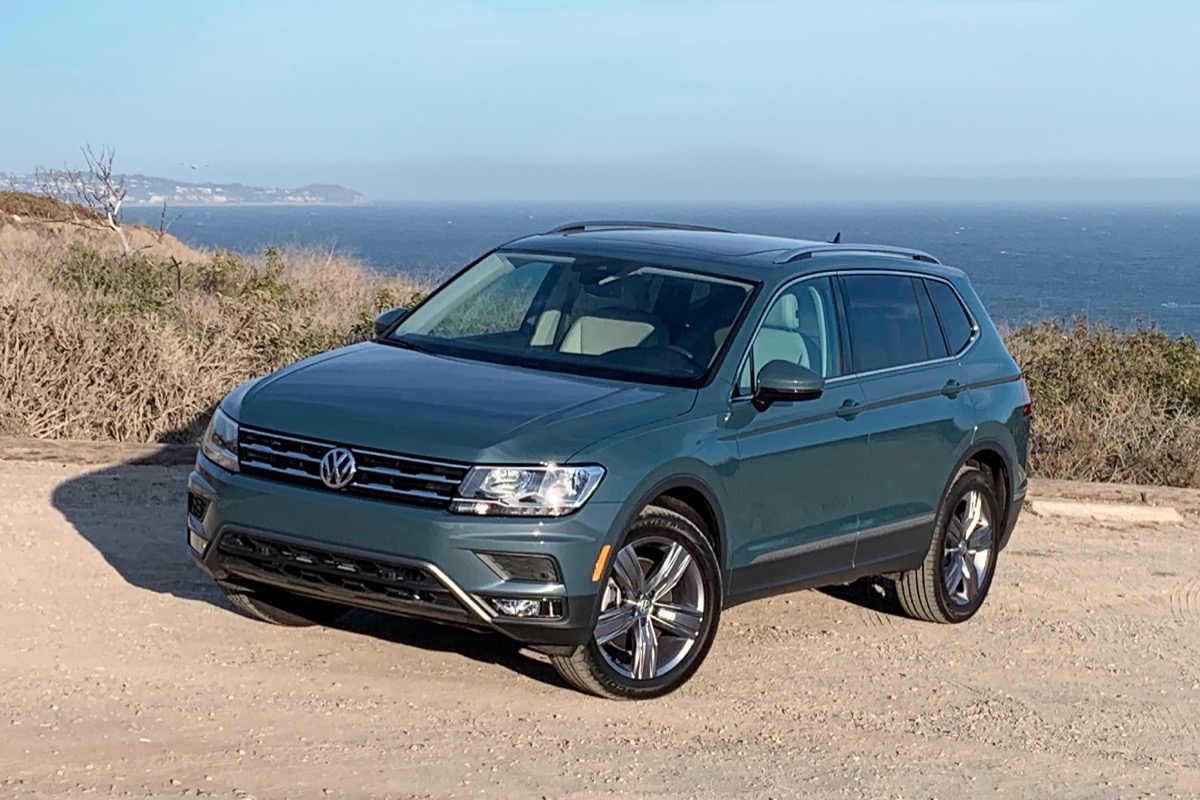 You may have noticed that crossover SUVs are popular. Among them, compact models dominate, having essentially replaced the traditional midsize sedan in American driveways. Offering room for five people, available all-wheel drive (AWD), and more cargo than any family car, they are the preferred method of transportation for a broad cross section of new vehicle buyers. But that’s not the only explanation for the runaway success of the 2021 Volkswagen Tiguan. 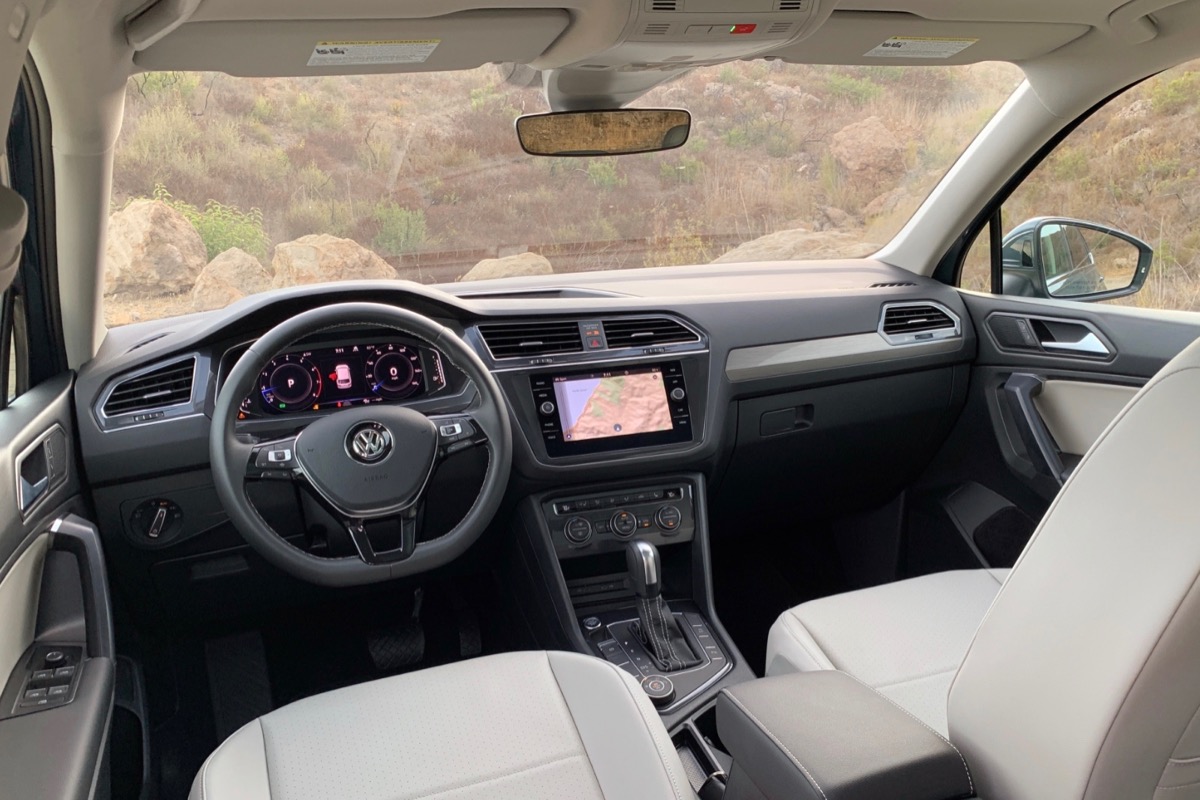 There is something to be said for clean lines and balanced proportions. Some people might find the 2021 Volkswagen Tiguan’s understated styling to be boring, but there is real beauty to be found in this SUV’s design. It has a conservative, upscale, and timeless aesthetic that is certain to age well.

Not only that, but the VW Tiguan is also large for its class. Having suffered for offering customers the wrong size of compact crossover with the first-generation Tiguan, Volkswagen corrected course with this second-generation model, adding a long-wheelbase version for regions where people prefer larger vehicles. Now, it’s nearly as big inside as as a Hyundai Santa Fe or Kia Sorento.

A positive outgrowth of the Tiguan’s upsizing is a roomy and accommodating interior with plenty of space for four people. You can carry five if necessary, and a small third-row seat expands passenger capacity to seven. At least three of those people will need to be children, though. Note that the third-row seat is optional for Tiguans with AWD.

Like many German automakers, Volkswagen combines modern geometric interior forms with a purposeful, no-nonsense control layout. The only oddity is the location of the engine start button on the center console, to the upper left of the gear selector. Typically, this button is placed on a vehicle’s dashboard.

Volkswagen dresses up the cabin’s somber tones and textures with shiny detailing, available digital instrumentation, and a deftly integrated touchscreen infotainment system with a flush touchscreen display, but you won’t confuse the Tiguan for an Audi. There is far too much hard plastic in this SUV for that, and the steering wheel stalks feel a little flimsy.

Shop for a new 2021 VW Tiguan, and you’ll find S, SE, and SEL trim levels. Two additional variants feature sporty R-Line design and equipment upgrades: SE R-Line Black and SEL Premium R-Line. Pricing ranges between $25,245 and $39,095, not including the $1,195 destination charge for shipping the SUV from its Puebla, Mexico, assembly plant to your local dealership.

Our test vehicle came with SEL trim, 4Motion AWD, and no additional options. The window sticker read $35,040, including the destination charge. 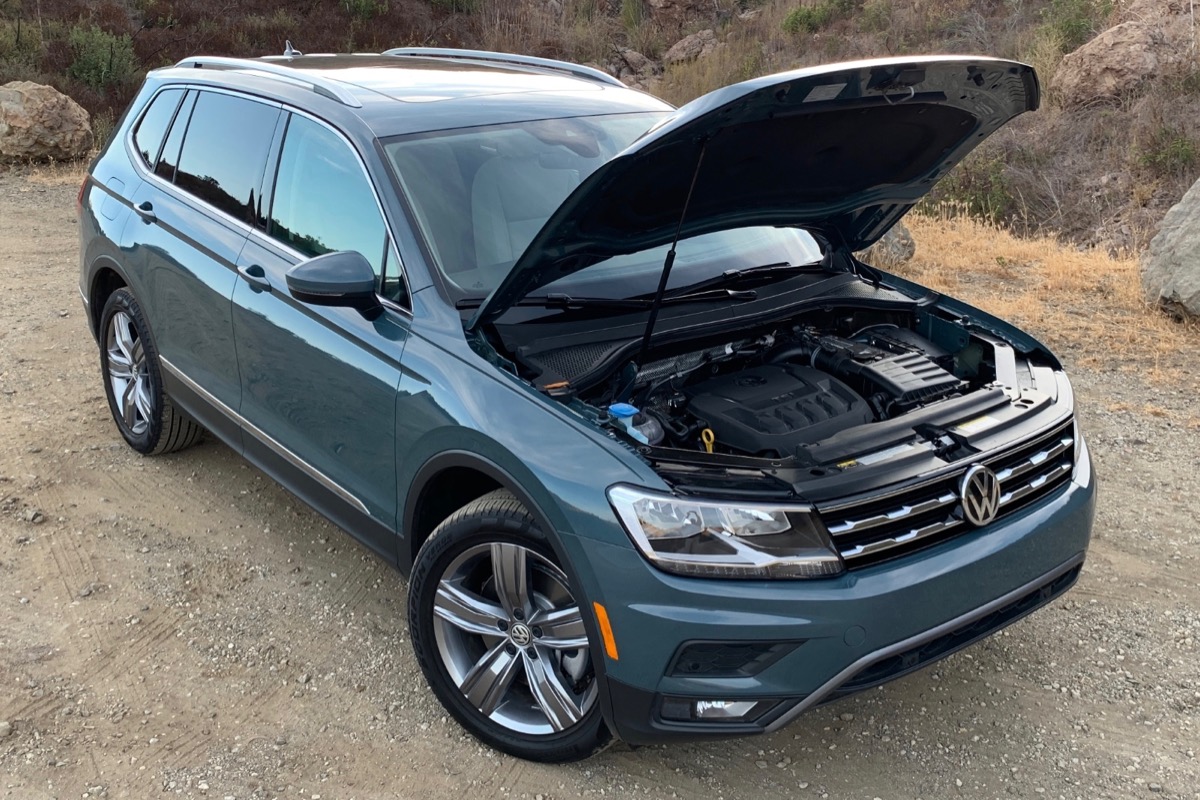 Every 2021 Volkswagen Tiguan has a turbocharged 2.0-liter four-cylinder engine generating 184 horsepower at 4,360 rpm and 221 pound-feet of torque at a low 1,600 rpm. An eight-speed automatic transmission sends power to the front wheels by default. The 4Motion AWD system is a $1,400 option on most models, and is standard with SEL Premium R-Line.

This powertrain is adequate for the task at hand, but does suffer from some turbocharger lag. In other words, in some driving situations, you push down on the accelerator pedal and nothing much happens for a second or two as the turbo spools up to deliver that thick wad of torque. Once you’ve tapped into it, this is a sweet little engine under the right circumstances.

When you need extra power for passing slower vehicles or simply an extra burst of oomph to match prevailing speeds as you enter a freeway, the Tiguan’s turbo-four can feel breathless. No doubt, the test model’s nearly 4,000-pound curb weight contributes to this perception of lethargy.

According to the Environmental Protection Agency (EPA), the 2021 Tiguan returns 25 mpg in combined driving with front-wheel drive (FWD) and 24 mpg with AWD. During testing, our Tiguan AWD averaged 22.6 mpg, suggesting that there is no clear fuel economy reward for accepting the drivetrain's often laggardly response and lack of mid-range motivation.

Fortunately, the Tiguan provides an otherwise pleasurable driving experience. Light but responsive steering, a soft and compliant ride, refined braking action, and tossable handling give the SUV a nimble, maneuverable quality perfect for daily driving in urban and suburban environments. The exception to this driving enjoyment is when crossing sharper speed bumps and railroad tracks, where the Tiguan’s lack of suspension isolation results in an unrefined character.

On a curvy road paved with undulating blacktop, you won’t mistake this SUV for Volkswagen’s GTI hot hatchback. In spite of the Tiguan’s laudable predictability, the tires give up their grip early in corners, and the suspension allows too much vertical and lateral body motion. These traits encourage the driver to slow down.

On a positive note, the Tiguan is remarkably quiet and composed on the highway. So while the tires may not encourage enthusiastic driving, they make long road trips more enjoyable. 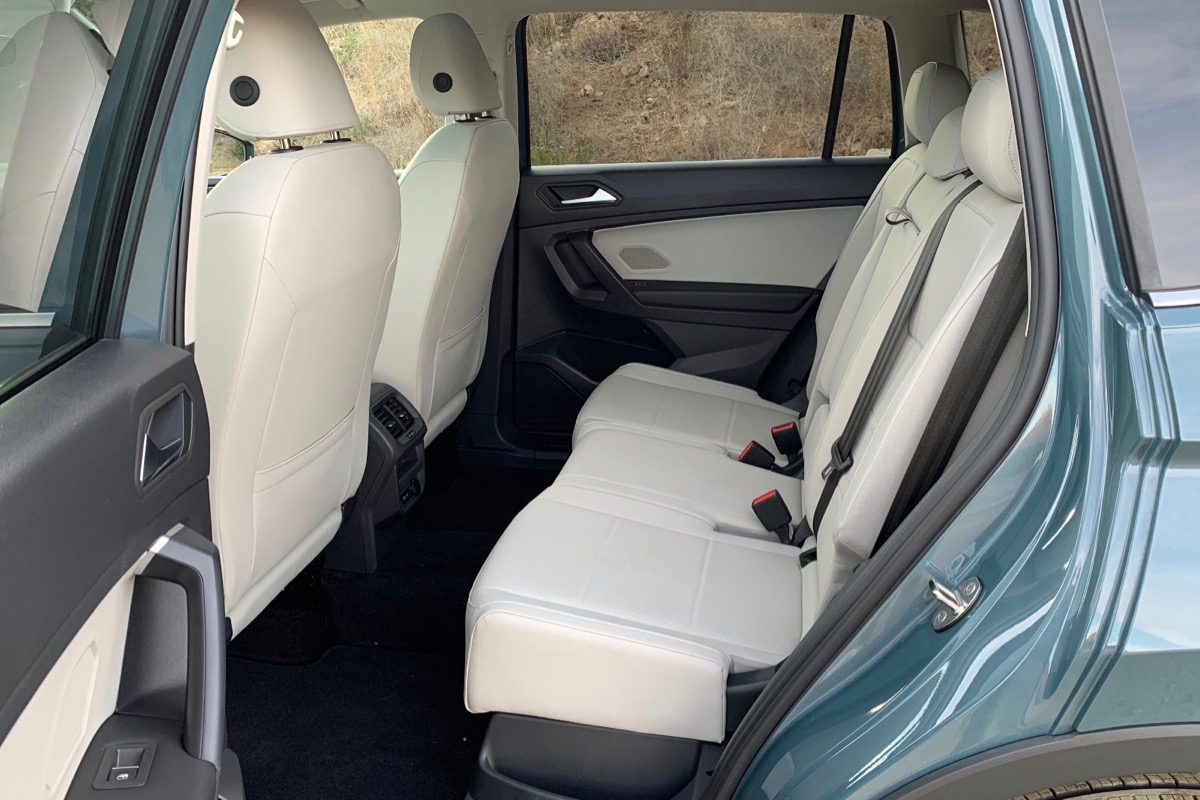 Comfort is king inside the Volkswagen Tiguan. Large doors and tall seating hip points make it easy to get into and out, and each front seat supplies a wide range of adjustments to ensure proper support and excellent outward visibility. Volkswagen’s perforated V-Tex leatherette upholstery does a good job of impersonating the real thing, and the dual-zone climate control system proves effective.

A large panoramic sunroof is available for the Tiguan and is enjoyable to open thanks to a wind deflector that eliminates noise and buffeting. Aside from a large glovebox and accommodating fabric-lined door panel bins, storage space is on the stingy side. A slot forward of the shifter serves as the available wireless smartphone charger, but withdrawing your device from it can be tricky.

The Tiguan has a 40/20/40-split folding rear seat, allowing owners to carry long items and four passengers at the same time. Behind it, the Tiguan supplies a usefully shaped cargo space with deep, roomy wells on each side that are perfect for carrying jugs of milk, bottles of wine, and the like. Levers in the cargo area fold the rear seatbacks flat.

Cargo volume measurements are dependent on whether or not the SUV has the available third-row seat. They range between 33 and 37.6 cubic feet behind the second row, with the smaller number reflecting the three-row model. Maximum capacity ranges from 65.7 to 73.5 cubic feet. 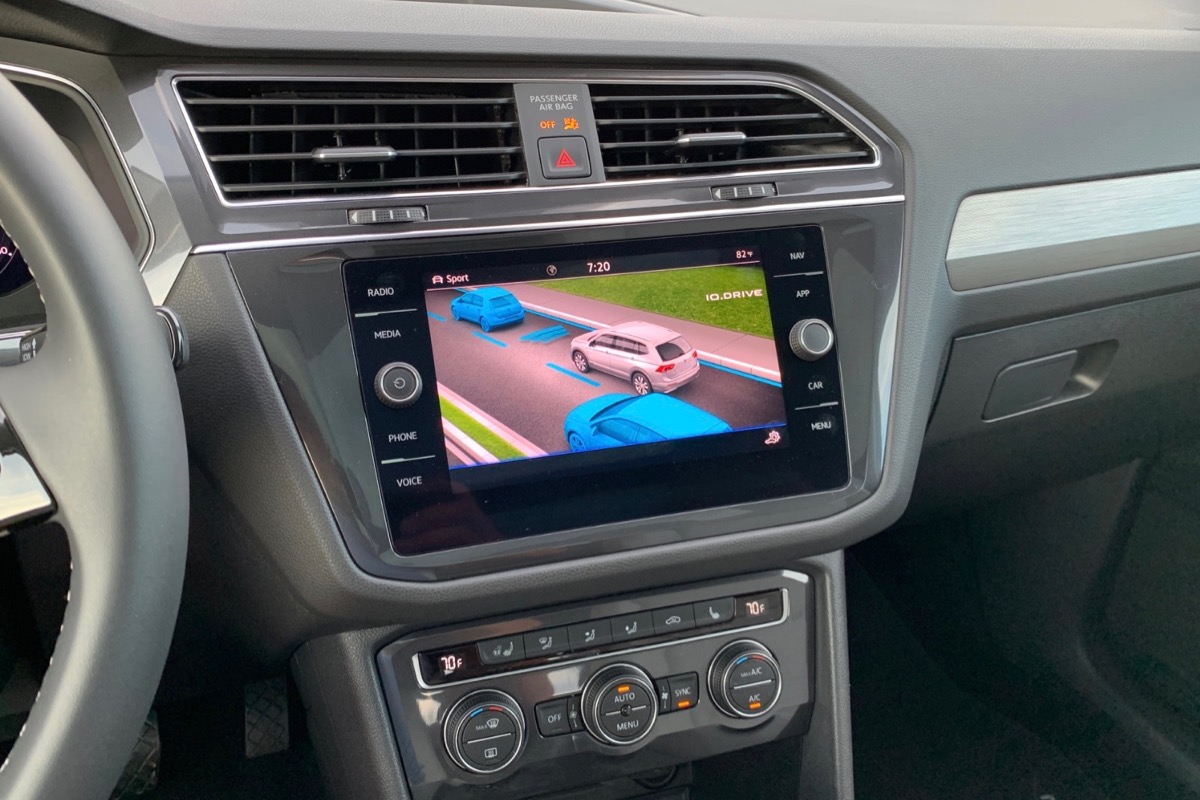 Volkswagen makes few changes to the 2021 Tiguan, the most significant of them a next-generation Modular Infotainment Toolkit (MIB) platform called MIB3.

We find the Tiguan’s MIB3 infotainment system to be an improvement, but there are some quirks associated with the user interface. Also, the voice recognition technology does not seem up to snuff, and the six-speaker sound system Volkswagen supplies as standard equipment in all trims except for the SEL Premium R-Line could not handle playing “Stargazing” by The Neighborhood at a moderate volume without producing truly flatulent bass. The SEL Premium R-Line gets a nine-speaker Fender premium audio system, and previous experience with VW Fender setups suggests it ought to be an option for all but the S and SE trims.

Both the SEL and the SEL Premium R-Line feature Volkswagen Digital Cockpit instrumentation. As it does with the rest of the Tiguan, VW takes an understated approach to the technology and information display. 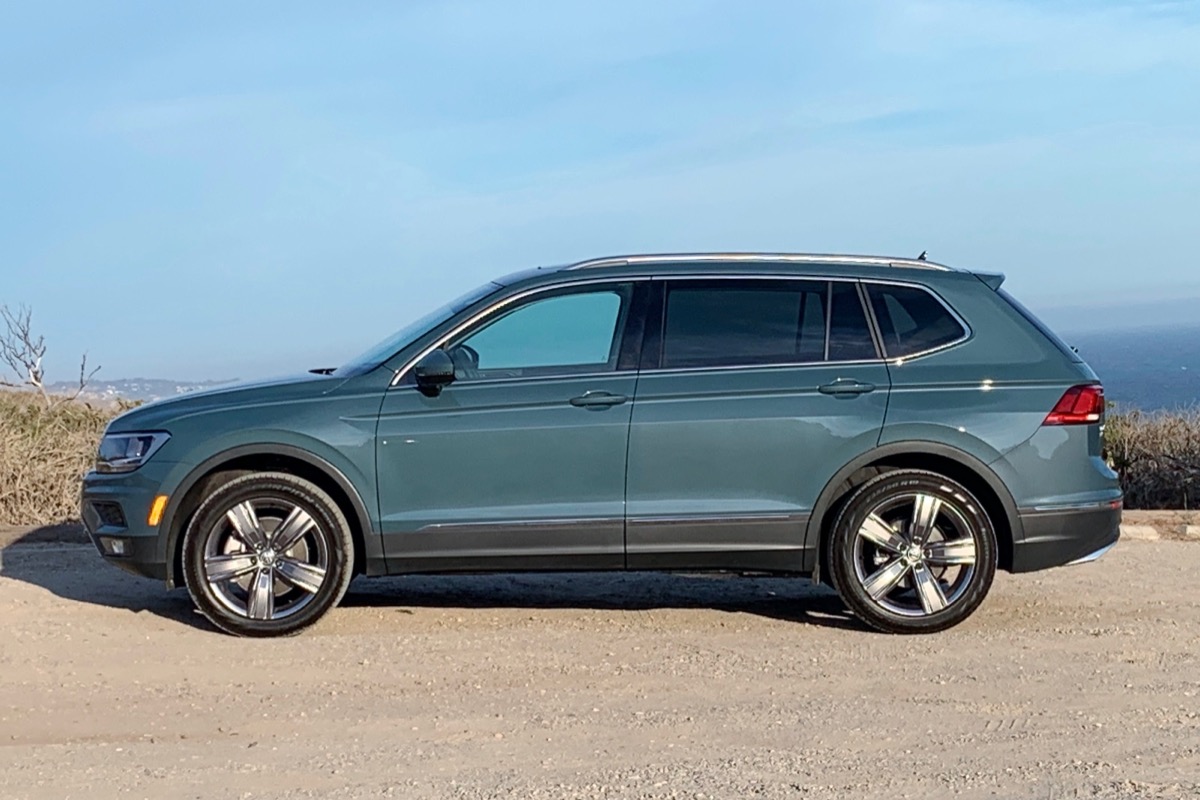 Starting with SE trim, the SUV has adaptive cruise control. The SEL adds lane-departure warning with lane-keep assist, while the SEL Premium R-Line features automatic high-beam headlights. All but the S and SE get front and rear parking sensors.

During testing, the adaptive cruise control demonstrated smooth braking in mixed driving conditions, but when a vehicle cuts into the gap ahead the system doesn’t recognize it until the other vehicle is fully in front of the Tiguan. Also, when traffic ahead clears, or you change lanes to go around slower vehicles, the Tiguan is slow to accelerate.

Lane-keep assist is standard starting with SEL trim, and is effective. But it is also somewhat inconsistent in terms of warnings and response. The blind-spot warning indicator is mounted on the mirror housing and not the mirror itself, and it’s easy to see. You can’t miss it.

The Tiguan’s parking sensors beep with increasing intensity as you approach an object. Irritatingly, when pulling out of a residential driveway nose first, the SUV’s automatic braking slammed the Tiguan to a stop when the sensors detected the street and confused it for a collision threat.

The standard reversing camera provides a clear view to the rear, but in order to enjoy a top-down surround-view vantage point you’ll need SEL Premium R-Line trim. Automatic post-collision braking is also standard for all Tiguans. It's designed to bring the SUV to a stop as soon as is possible following a collision in order to prevent secondary impacts after the airbags have deployed and deflated.

Car-Net connected services equips the Tiguan with numerous safety features including automatic collision notification, emergency calling, and Family Guardian alerts. Family Guardian supplies parents of teen drivers the ability to set geographic boundary, speed, and curfew limits, and then sends Mom and Dad an alert whenever a driver in possession of the Tiguan exceeds them.

According to the Insurance Institute for Highway Safety (IIHS), the 2021 Tiguan earns a “Top Safety Pick” rating in SEL and SEL Premium R-Line specification thanks to the high-performing LED headlights that are standard for these trims. The National Highway Traffic Safety Administration (NHTSA) has not published complete crash-test results for this SUV. 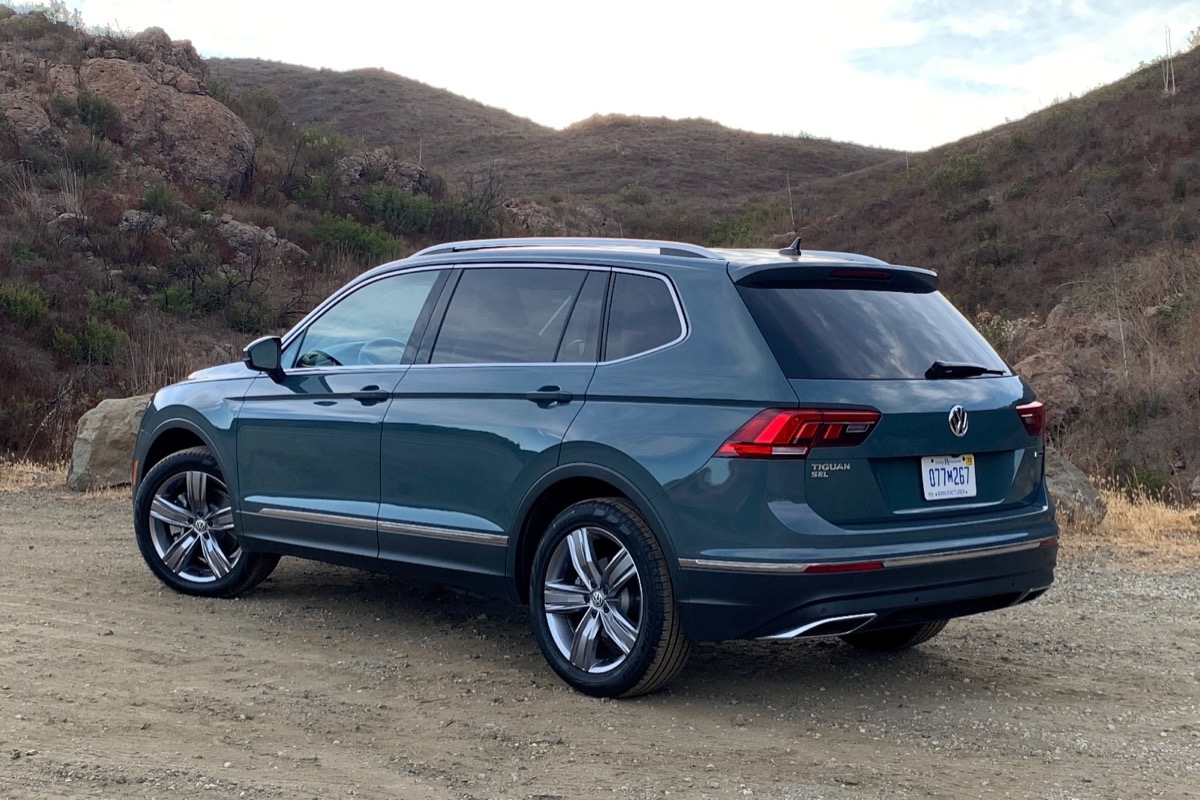 While a fully-loaded Tiguan SEL Premium R-Line exceeds $40,000, all other versions of this SUV are competitively priced against other compact SUVs. Consider the Tiguan’s standard third-row seat, cavernous interior, and Carefree Coverage plan, and it presents a strong value proposition.

What is Volkswagen Carefree Coverage? Good question. This protection plan is standard, and it supplies free scheduled maintenance for two years or 20,000 miles, free roadside assistance for three years or 36,000 miles, and a four-year/50,000-mile warranty. That’s not as compelling as what some automakers offer, but represents a tastier carrot than you’ll get from most.

Even without taking its cost-effectiveness into account, the 2021 Volkswagen Tiguan is an attractively styled crossover with a delightful daily driving character that offers undeniable practicality, utility, and safety. Better yet, even though it’s VW’s best-selling model in America, the Tiguan isn’t nearly as ubiquitous on American roads as the Chevrolet Equinox, Ford Escape, Honda CR-V, and Toyota RAV4. Yet.

What's your take on the 2021 Volkswagen Tiguan?

Have you driven a 2021 Volkswagen Tiguan?
Rank This Car

Enter your zip to see incentives for a new Tiguan in your area.

How Do I Reject An Offer After I Accepted It?

I submitted the paperwork through the CarGuru online portal to sell my car. I clicked submit, but now I have decided to keep my car. Did I just commit to selling my car although I no longer want to ...

27 views with 1 answer (last answer about a month ago)