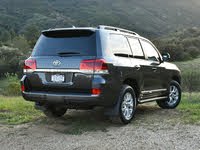 Looking for a New Toyota Land Cruiser in your area?

Is the 2021 Toyota Land Cruiser the last example of an icon? Inconceivably, for the U.S. market, it might just be. 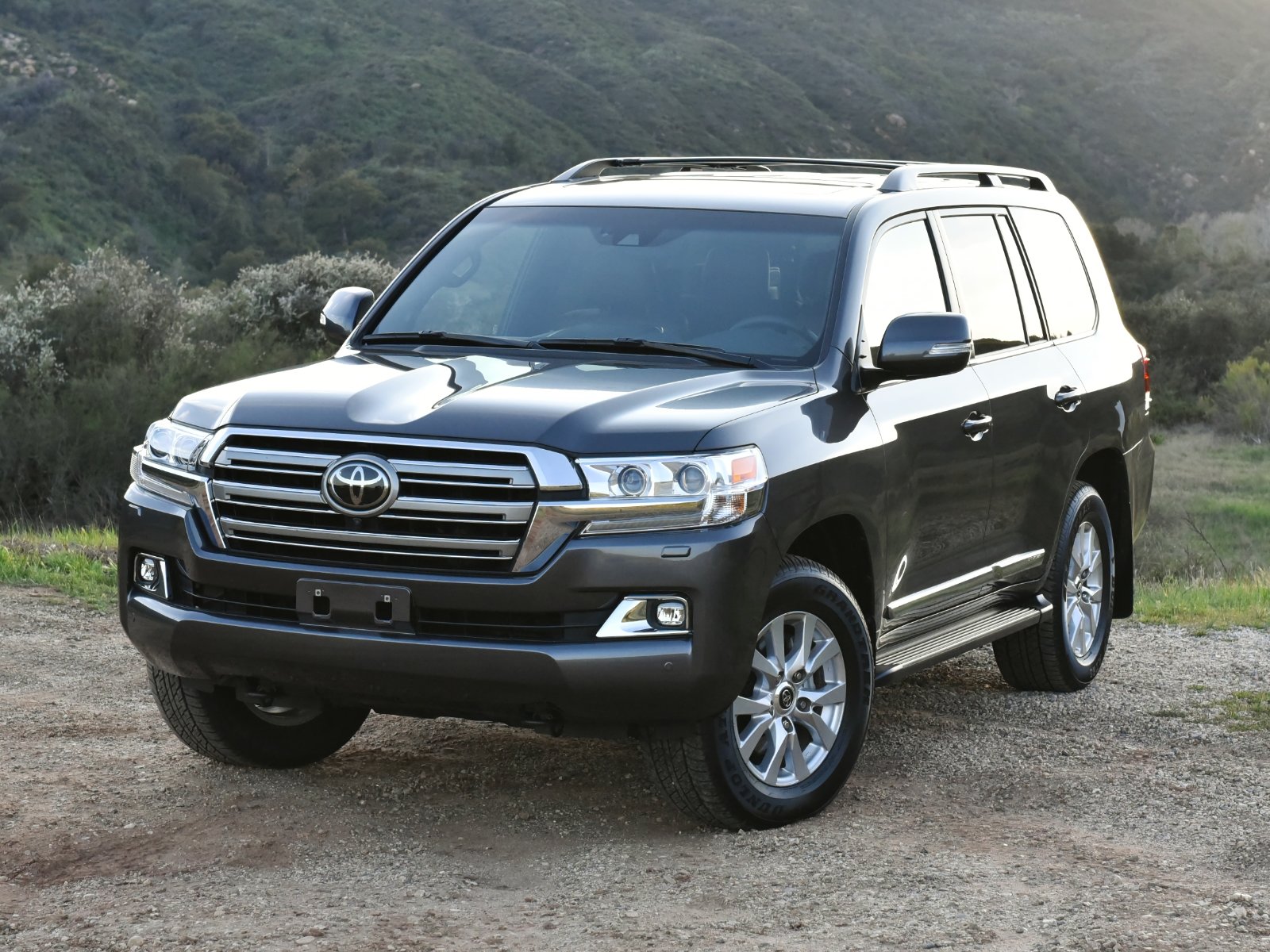 A 2021 Toyota Land Cruiser has a base price north of $85,000. Four paint colors, two leather choices, and a single factory option are available, aside from dealer-installed accessories such as carpeted floor mats. You're paying a luxury price, but you're not getting a luxury experience in return. And that's why the Land Cruiser is departing the U.S. market after the 2021 model year. 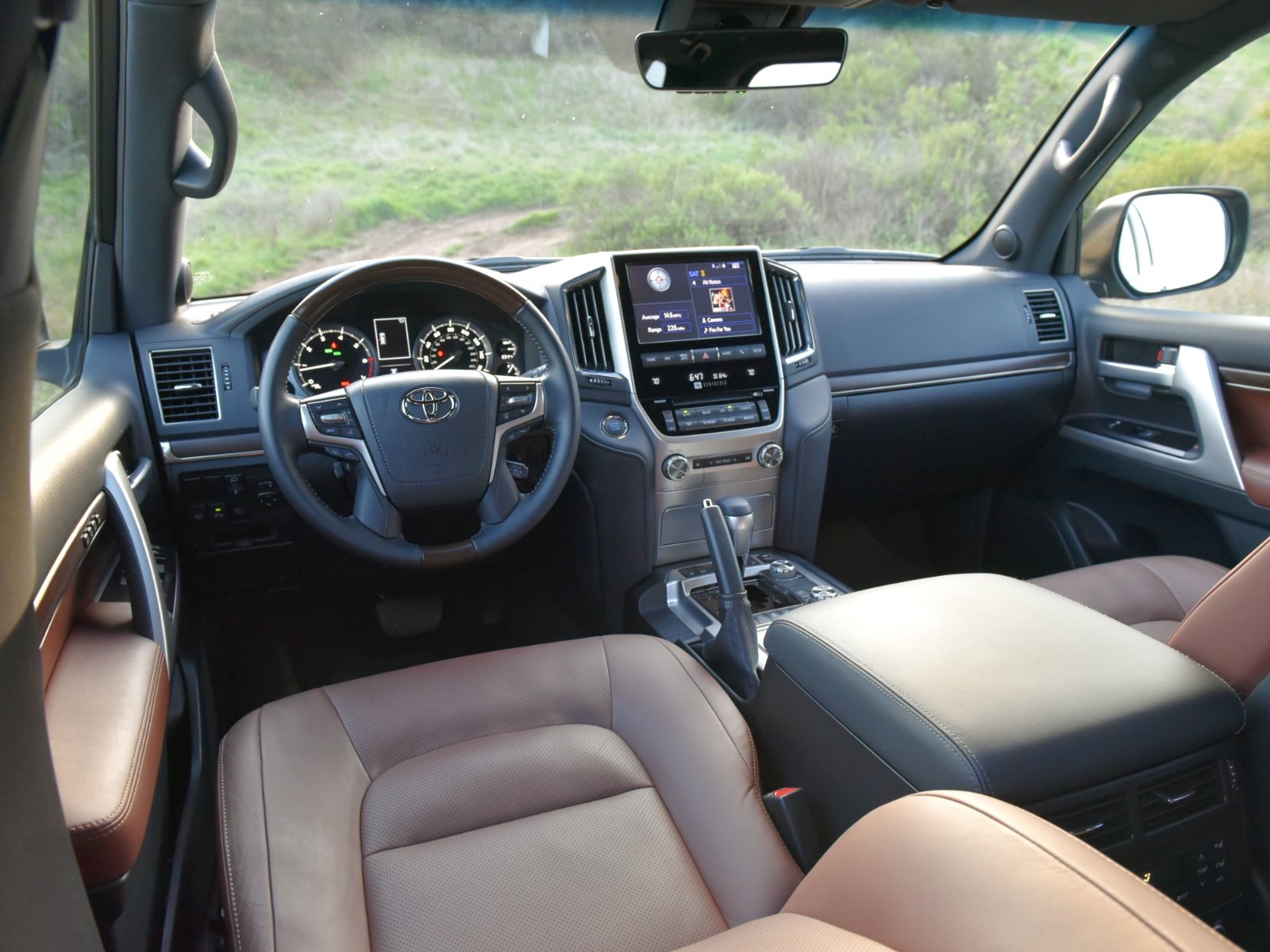 For its final year in its current form, Toyota continues to offer the Land Cruiser in a Heritage Edition trim level to celebrate the SUV's 65th anniversary. It comes in four colors but looks best in Midnight Black to go with its bronze BBS wheels, giant Yakima Megawarrior roof storage basket, and old-school badges on the rear roof pillars. Add a screaming chicken decal to the hood, and you'd be eastbound and down before pushing the voice recognition button and asking: "Snowman, ya got yer ears on?"

We figured the Heritage Edition is what Toyota would deliver for this review. Instead, the standard spec Land Cruiser arrived, decked out in Magnetic Gray paint with plush Terra (brown) semi-aniline premium leather upholstery.

Honestly, from the outside, it looked like a first-generation Toyota Highlander owned by someone with too much disposable income to spend on "upgrades" from a J.C. Whitney catalog. Giant headlights, gianter taillights, and a blizzard of chrome decorate what is otherwise a basic two-box shape devoid of character aside from its flared fenders.

More imagination is evident inside the 2021 Land Cruiser, where a mix of Toyota parts-bin switchgear and circa-2005 Lexus design themes contrast with plush, high-quality materials. And yes, that is a traditional hand-operated parking brake on the center console and a CD player on the dashboard.

Being in the presence of a 2021 Toyota Land Cruiser is like traveling back in time, but not far enough back to when these SUVs were all that and a bag of chips. Or whatever. 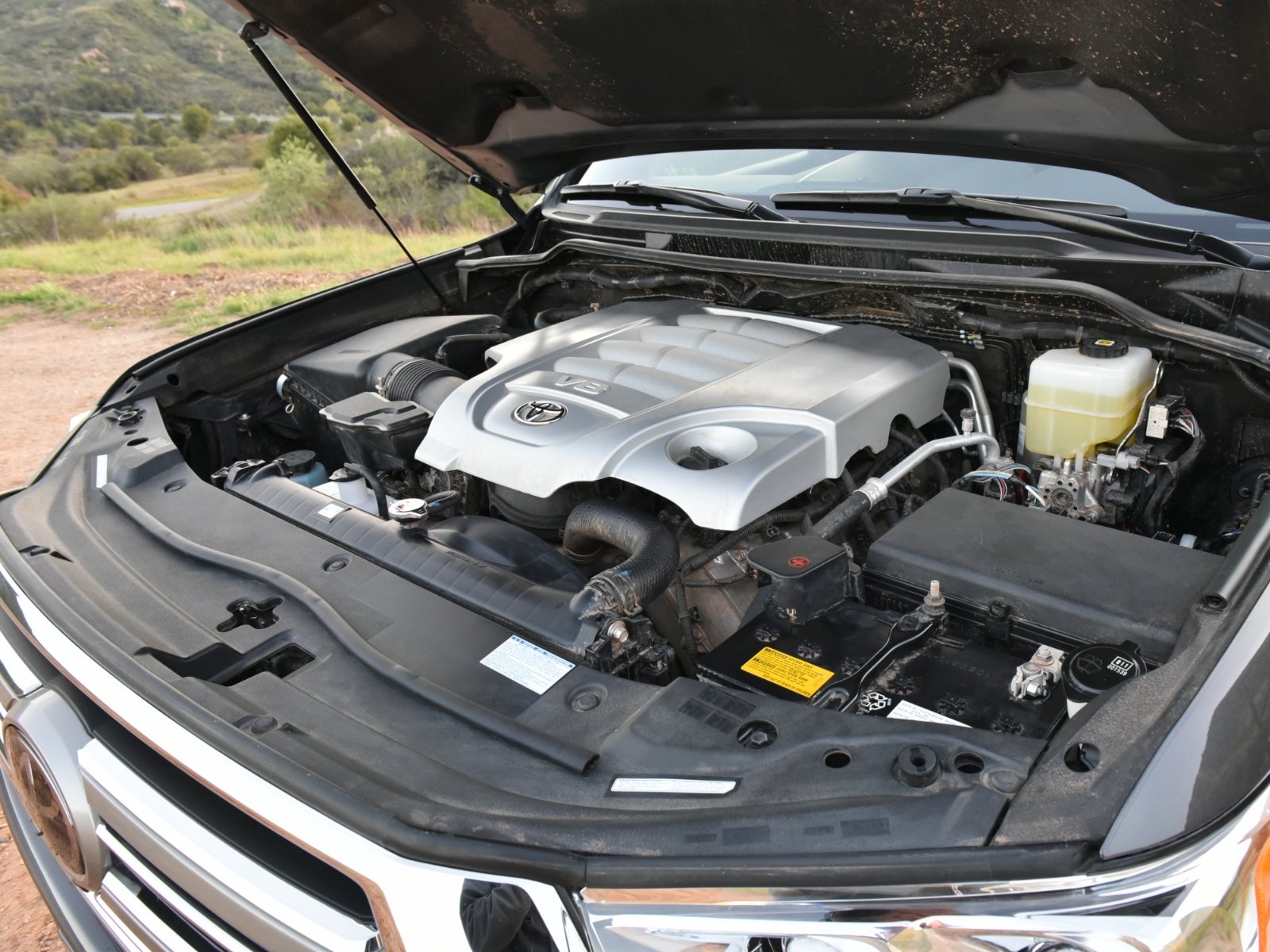 Unlike in a Toyota Tundra, which has the same 381-horsepower 5.7-liter V8 engine that's bolted into the Land Cruiser, you can barely hear the engine when this SUV is accelerating. The roar is hushed to nearly imperceptible levels, with just enough of its characteristic note filtering into the cabin to remind you why the trip computer's average fuel economy number reads less than 15 mpg. We averaged 14.7 mpg on our testing loop, beating the EPA rating of 14 mpg in combined driving.

An eight-speed automatic transmission funnels the motive force to all four wheels through a full-time four-wheel-drive system with a two-speed transfer case. With 90% of the engine's 401 pound-feet of torque available at just 2,200 rpm, first gear delivers a bunch of unexpected thrust. You might want to engage the 'ECT Second' feature using the button on the center console, which starts the SUV in second gear for much smoother launches.

The Land Cruiser's legendary off-road capability is rooted in more than just this component set. For example, there's a Torsen limited-slip differential that automatically distributes power based on available traction. The normal split sends 60% of the power to the rear wheels, but drivers can lock it into an even 50:50 front-to-rear split when that's desirable.

Crawl Control is low-speed cruise control for use on challenging terrain, while Off-Road Turn Assist works in conjunction with Crawl Control to tighten the SUV's turning radius. A Multi-Terrain Monitor adds multiple camera views and an inclinometer so that drivers can more easily monitor the situation.

By now, you're assuming this SUV can cruise over any type of land, and it sure feels that way. We chucked some rutted and rumpled trails at the Land Cruiser, and it seemingly chuckled at our weak attempt to challenge its capabilities.

On pavement, everything about the way this SUV drives is either muffled, numbed, or lubricated to deliver the refinement necessary to justify the price tag. You don't hear or feel much of anything, aside from some occasional discombobulation in the ride quality. You'll need to work the steering wheel more than you might like when parking this remarkably maneuverable beast, but otherwise, the Land Cruiser drives like a Lexus and handles like the nearly 3-ton leviathan it is. 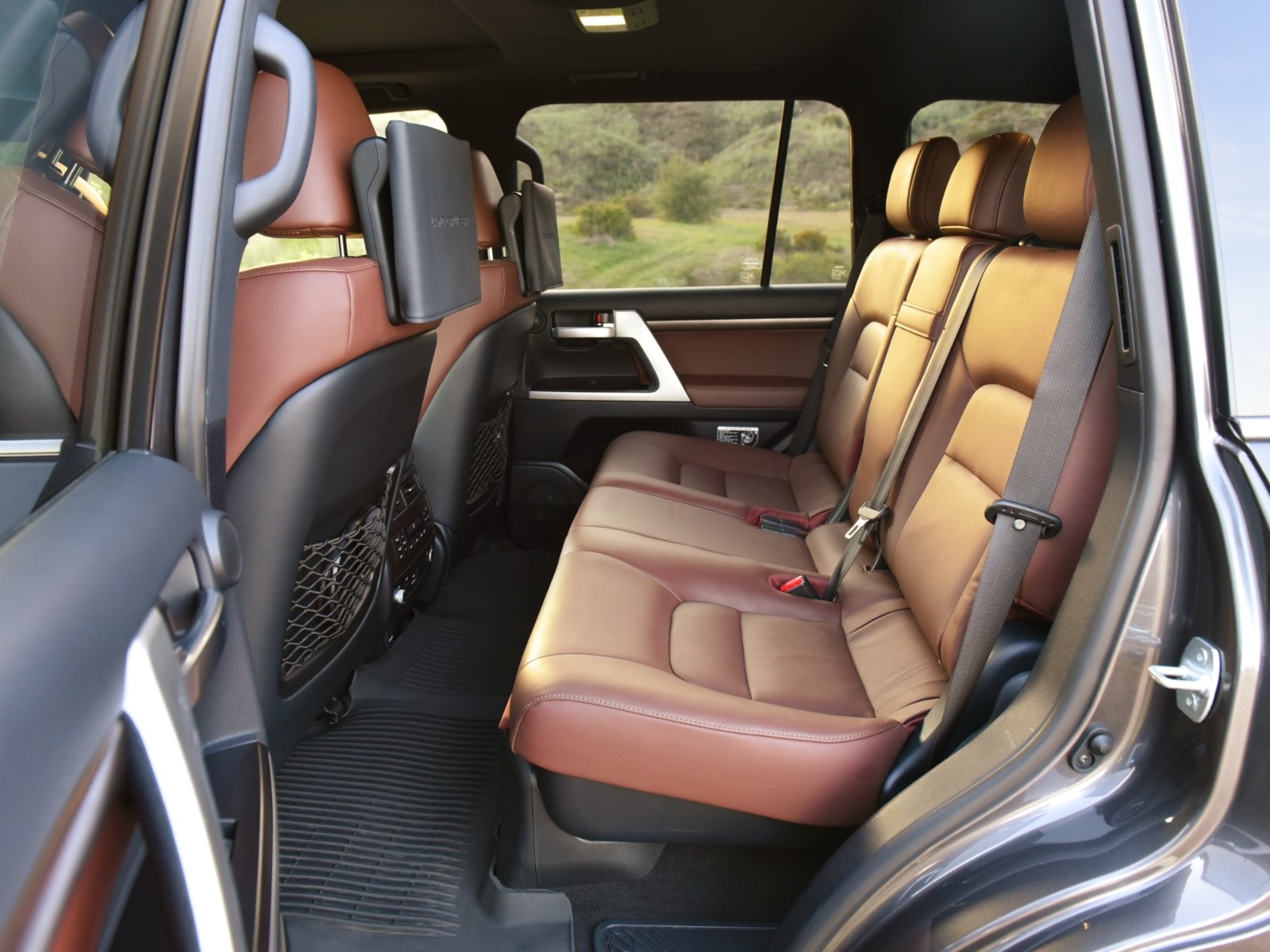 Aside from its dated appearance, the Land Cruiser's interior sure is swanky. Storage space isn't particularly impressive, though. The center console is home to a parking brake handle and all manner of switchgear, a small compartment in the dashboard serves as a wireless smartphone charger, and the test vehicle's already small center console bin was a "cool box" that sounds better than it is.

Plush, premium, perforated leather upholstery covers the tall, wide, supportive seats. The front seats are automatically heated and ventilated, and the wood-and-leather steering wheel is heated. You sit tall in this SUV, with a commanding view out, like you're the king of all you survey.

A three-passenger third-row seat is standard, and if people sitting in the second row are willing to slide forward, it accommodates adults. Leg support is lacking, though, so this isn't a comfortable location for longer trips.

Via the split clamshell-style liftgate and tailgate, you can access 16.1 cubic feet of cargo space behind the third-row seat. To expand cargo room, the 50/50-split third-row seats fold up against the cargo area's sides to supply 41.4 cubic feet of volume. The Land Cruiser's lower tailgate is a great place to sit when you're wet, sandy, dirty, or muddy and need to clean up before climbing aboard. Fold the second-row seats down, and the Land Cruiser's maximum cargo space measures 82.8 cubic feet. 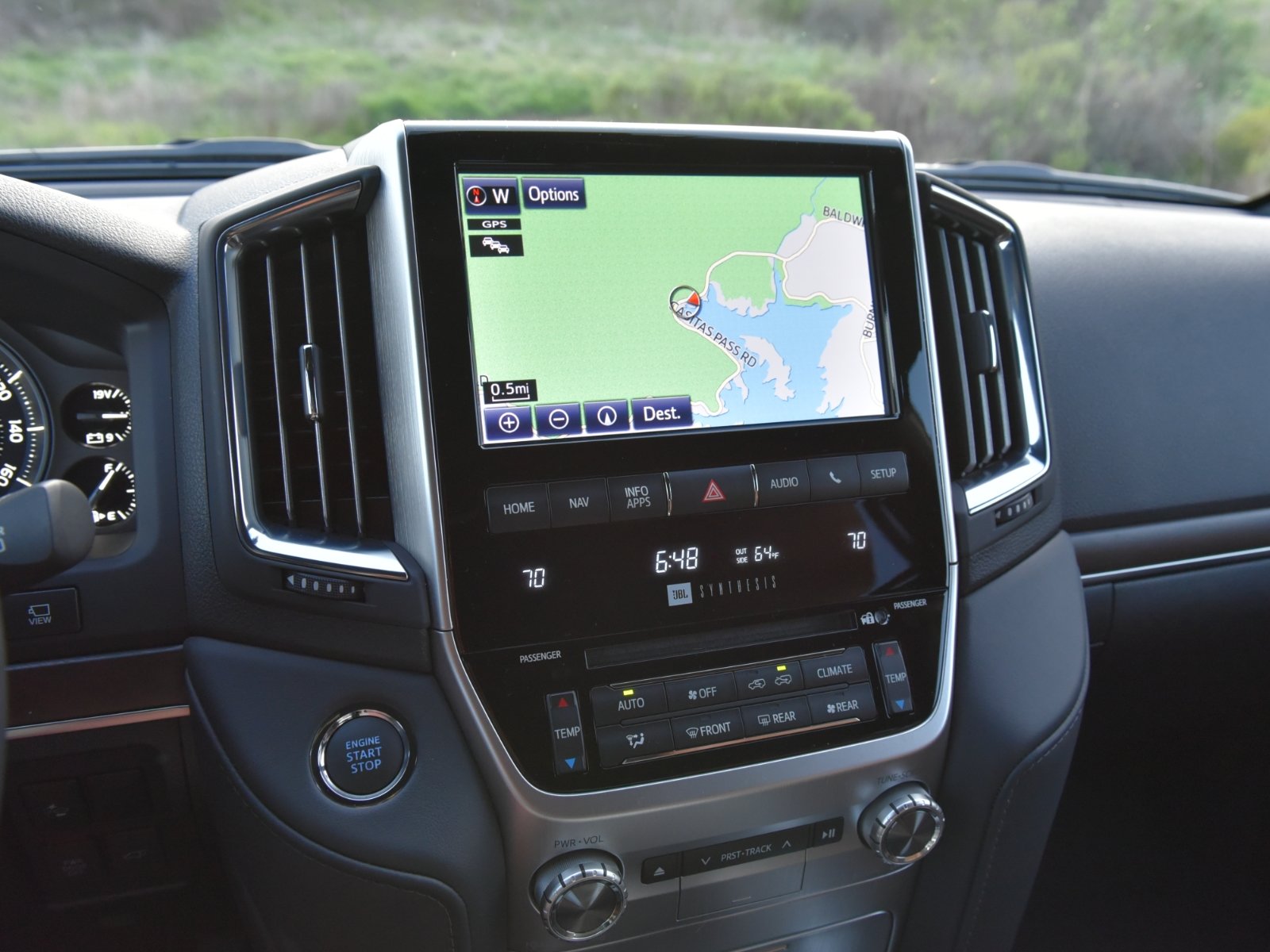 Technologically, the Toyota Land Cruiser transports you to a simpler time. It has a 9-inch touchscreen infotainment system, but it doesn't allow you to swipe or scroll as you do on your smartphone. Instead, you tap, tap, tap your way to successfully executing commands, and it beeps to confirm each stab of your finger on the screen's surface.

It runs the same Toyota Entune technology that you'll find in a typical Corolla, which doesn't make the Land Cruiser feel 85-grand-worth of special. There isn't much depth to the system, either, so you won't get lost in a myriad of menus and custom settings. The voice-recognition system can't handle conversational commands and queries but is agreeable if you stick to the basics and learn a handful of prompts.

Egregiously, the Land Cruiser does not offer Apple CarPlay or Android Auto. You cannot simultaneously pair two devices to the Bluetooth, either. But Siri Eyes Free voice control is present and accounted for, and Toyota provides a free three-month subscription to SiriusXM satellite radio.

Large, well-marked buttons and big knobs dominate the dashboard, a delightful throwback to the days when finding and using controls was straightforward. The approach might not adhere to current minimalism trends, but it sure makes adjusting the radio or climate system an effortless task free of driver distraction.

The dual-screen rear-seat entertainment system is equally dated. The displays measure 11.6 inches, but they're not touchscreens, and you can't stream content to them. You can play DVDs, though, and hook up a game system via the HDMI connections. My kids thought the system was quaintly old-school.

A 14-speaker JBL Synthesis premium audio system is standard in the Land Cruiser, producing good sound. However, it is no match for some of the better high-end audio components available in other SUVs at this price point. 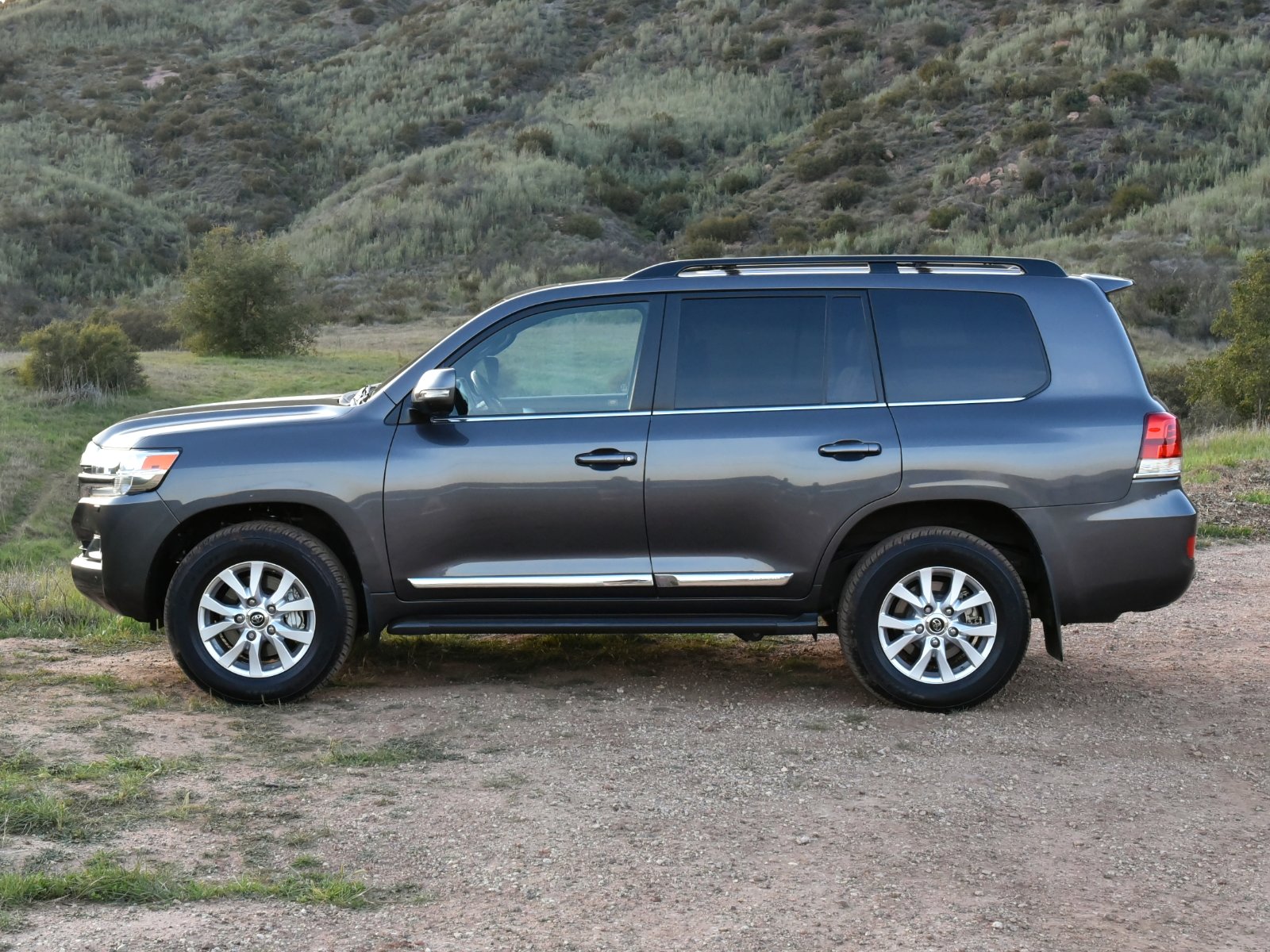 With 10 airbags and almost 6,000 pounds of curb weight, the Land Cruiser gives its occupants a good chance of survival in a collision with smaller vehicles. But the underlying engineering project that resulted in this SUV kicked off during the Dubya presidency, and crash-test ratings do not exist for this vehicle, so it's anyone's guess as to how well it will protect you if you crash into a stationary object or, say, a Ford F-350.

Do you notice a few things missing from this list? You cannot get a more advanced driving assistance system in a Land Cruiser, for starters. This SUV does not offer the stop-and-go adaptive cruise control or automated lane-keeping and lane-centering assistance systems. Now, you might find this to be a positive rather than a negative quality, but their absence does not lend itself to competitiveness in this price class. 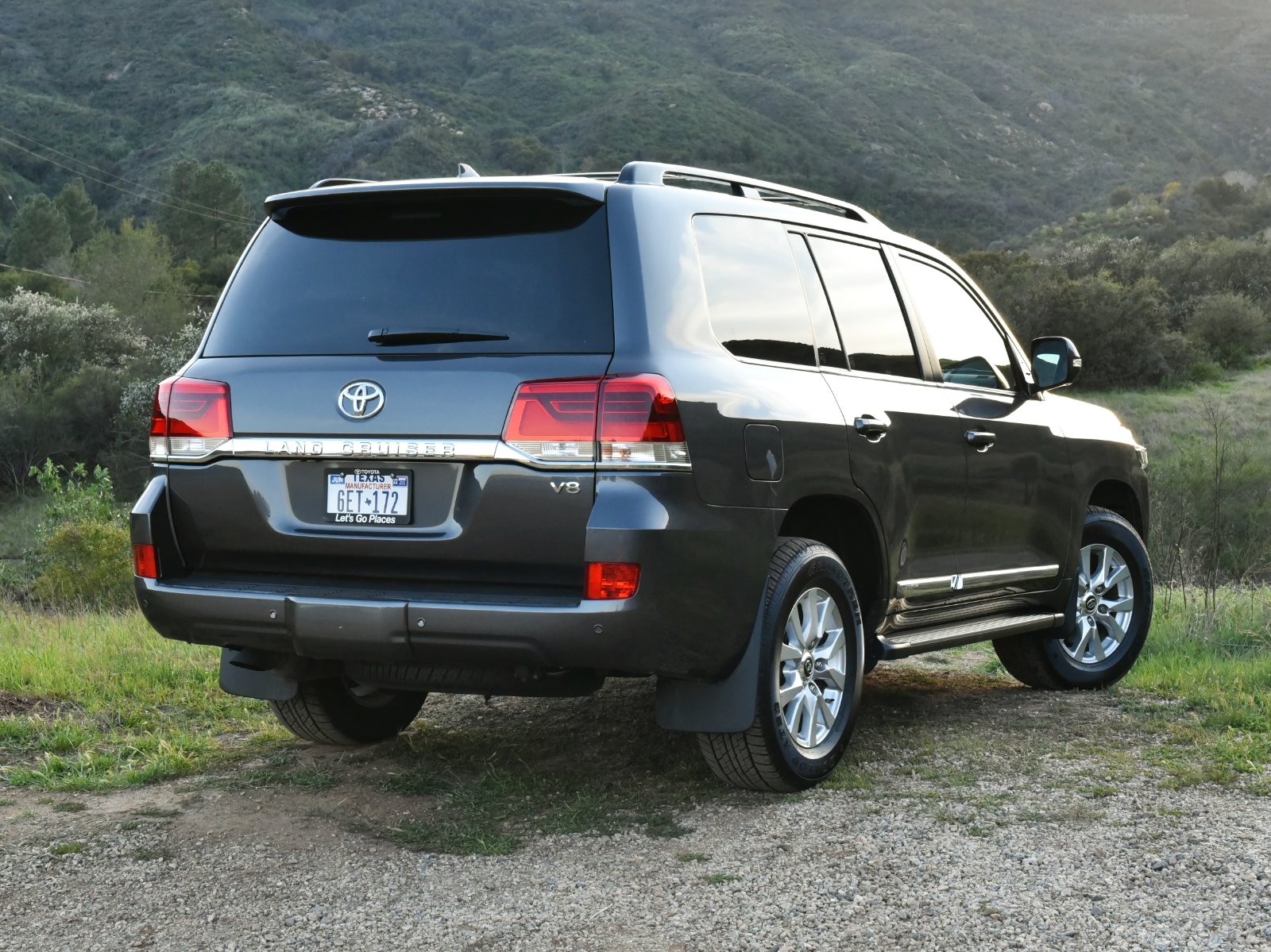 Nothing about the 2021 Toyota Land Cruiser is cost-effective unless you count the complimentary scheduled maintenance for the first two years of ownership or the free year of Safety Connect service. And those two items don't come anywhere close to making up for value deficiencies elsewhere.

We know people love the Toyota Land Cruiser. But when you strip off this SUV's nameplate and the legendary history that accompanies it, what you've got is a wildly overpriced, technologically disadvantaged, grossly inefficient pig of a vehicle.

Yes, it will reliably take you to the ends of the Earth, as long as there are gas stations along the way. Indeed, what feels like hundreds of pounds of sound deadening material, silicone lubricant, and supple leather will isolate you from whatever the lackeys at the Department of Transportation and the cruelty of Mother Nature lob in your direction. And the Toyota Land Cruiser Heritage Edition has the subtlest of retro vibes to it, helping to make the SUV more appealing.

But unless you are an absolute die-hard fan of the nameplate, forget about this SUV. The legendary Land Cruiser name deserves a better host.

What's your take on the 2021 Toyota Land Cruiser?

Have you driven a 2021 Toyota Land Cruiser?
Rank This Car

Enter your zip to see incentives for a new Land Cruiser in your area.