Looking for a New Nissan Armada in your area?

Nissan’s full-size three-row SUV gets a makeover for 2021. 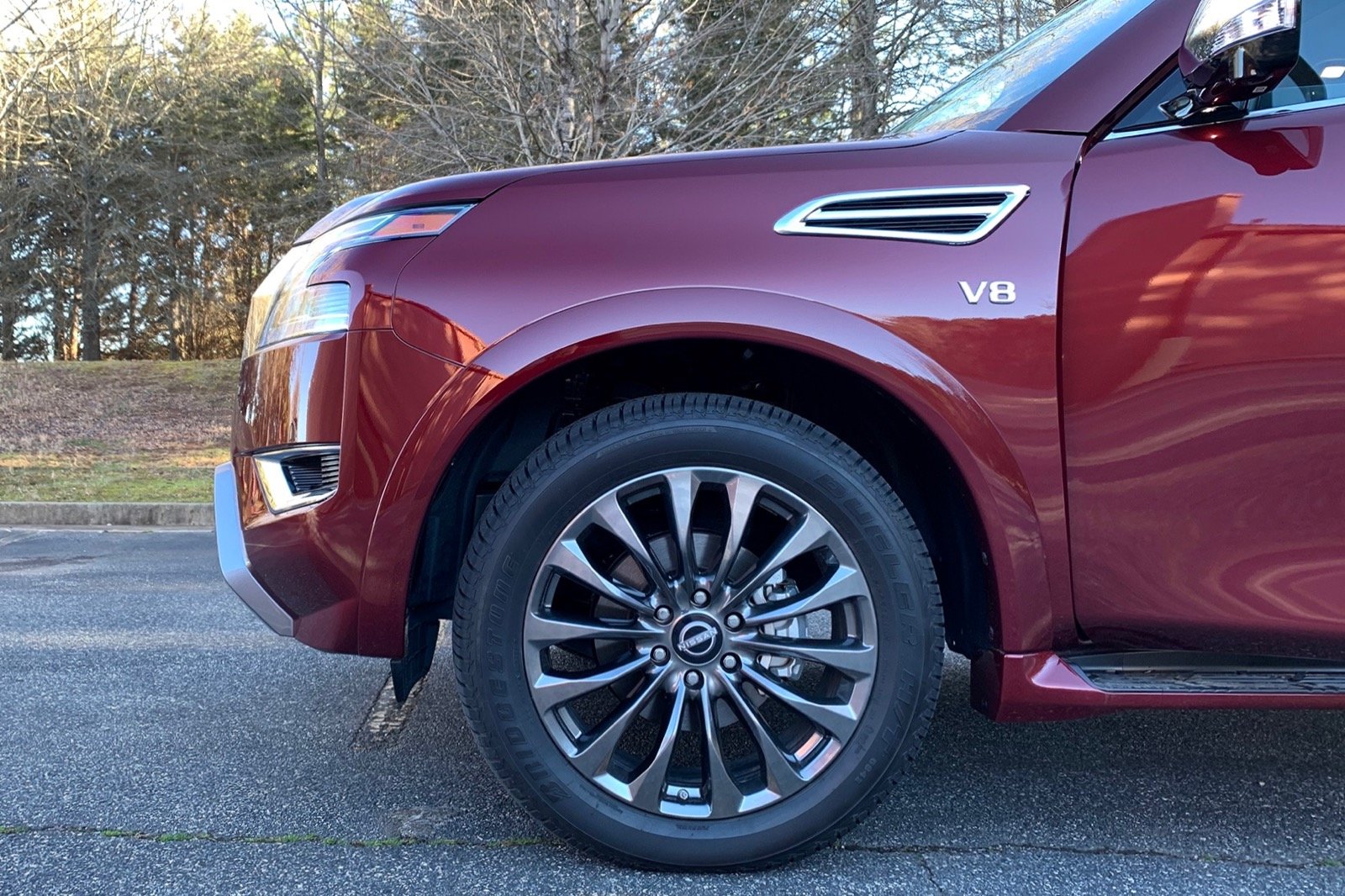 Nissan has updated its Armada yet again, giving it a freshened appearance and upgraded technology but leaving in place some outdated appointments. Its engine remains unchanged, as do the comfortable seats. The SUV remains a capable but fuel in-efficient daily driver. New safety and infotainment tech round out the list of enhancements. 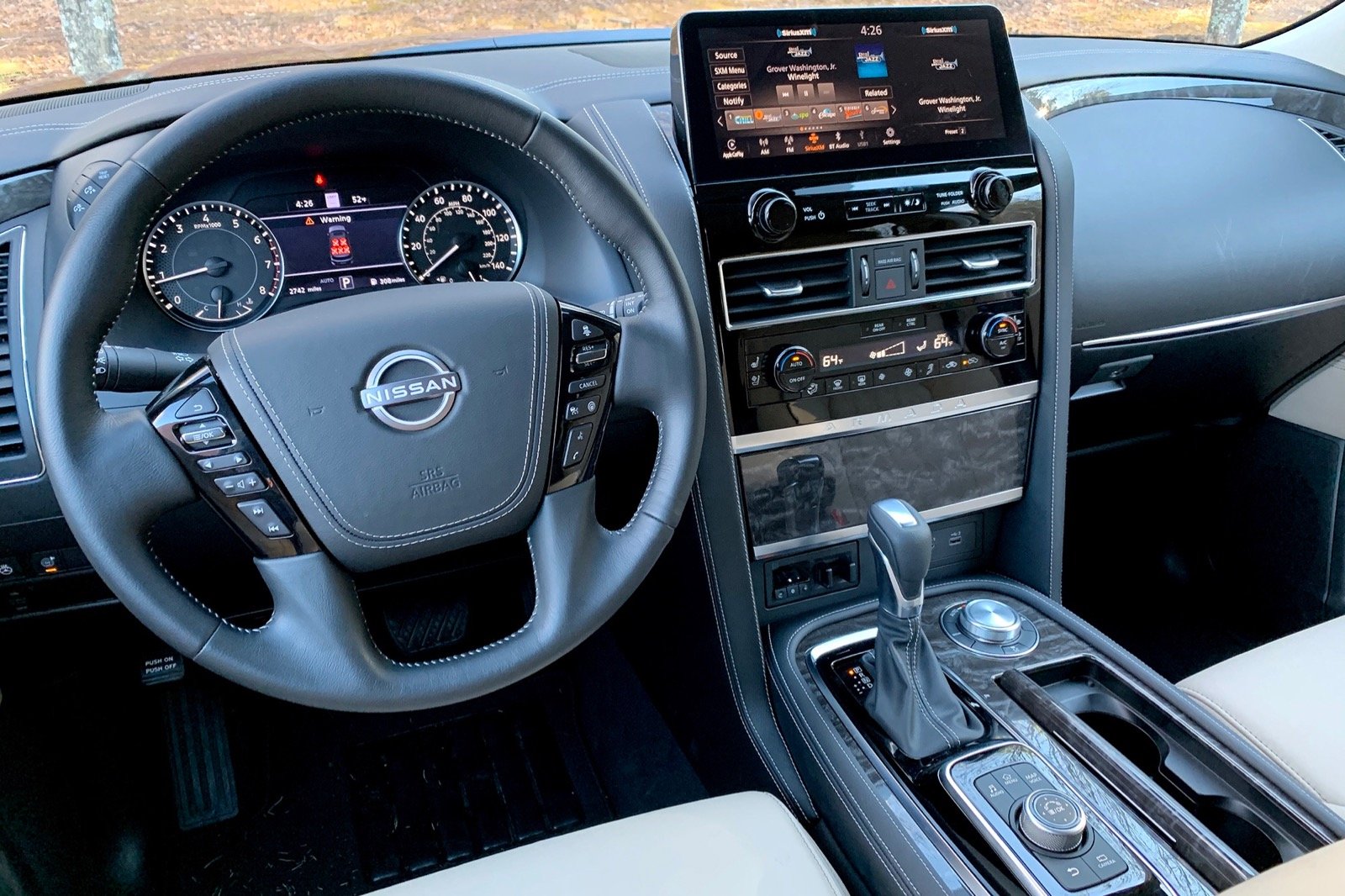 The Nissan Armada, a close cousin of the Nissan Patrol, has undergone a significant facelift for the 2021 model year. It continues to have the capability the large SUV has become known for but now has looks that bring it closer in line with the new signature exterior design of the Nissan brand.

For the 2021 model year, Nissan sells the Armada in S, SV, SL, and Platinum grades. The company’s popular Midnight Edition Package is only available on the Armada SL. We tested the Armada in its highest Platinum trim level in prototype form.

The redesigned exterior of the SUV features a new grille, front fenders, front and rear bumpers, and LED headlights and taillights. The changes make the Armada look more modern and bring it in line with the new looks of the Nissan Kicks, Rogue, and Pathfinder, but don’t cause it to shed its traditional beefy and athletic body styling.

Body-color over fenders, dark-painted roof rails, and an acoustic windshield and front side windows are standard, as are LED low-beam/high beam headlights with auto on/off, LED daytime running lights, and power-adjustable and folding side mirrors. LED fog lights, a power sliding moonroof, and side mirrors with puddle lamps are available.

Depending on the trim level chosen, the Armada rides on either 18-, 20-, or 22-inch wheels. All are aluminum alloy and come wrapped in all-season tires. Upper trim levels of the Armada have a full-size spare tire, something that’s become increasingly rare in new vehicles.

Nissan gave the Armada its new logo, which is prominently placed on the SUV’s grille, rear, steering wheel, and wheel caps. Since the Armada was introduced, the logo has gone on to grace the bodies of the 2022 Nissan Pathfinder and Frontier.

Changes to the body-on-frame SUV most deeply impact it from the A-pillar forward. Despite having a mostly new rear, the Armada doesn’t lose its underbite, which is quick to pick up and keep dirt and mud. It’s a trait that ages the model, especially in a time when Armada’s competition—like the Chevrolet Tahoe and GMC Yukon—has been completely redesigned for the 2021 model year.

While Nissan’s connectivity, infotainment system, and other tech features have been upgraded for the new model year, the interior of the Armada remains dated. The upper half of the center stack is much more modern than what surrounds it. The Prima-Tex (standard), leather (available), and quilted leather (standard on Armada Platinum) seating material isn’t what dates the Armada, but other design choices that make the SUV appear past its prime, like rouched material on the door panels and abstract patterned hard plastic inlays on the console, door panels, and dashboard that cheapen the aesthetic. 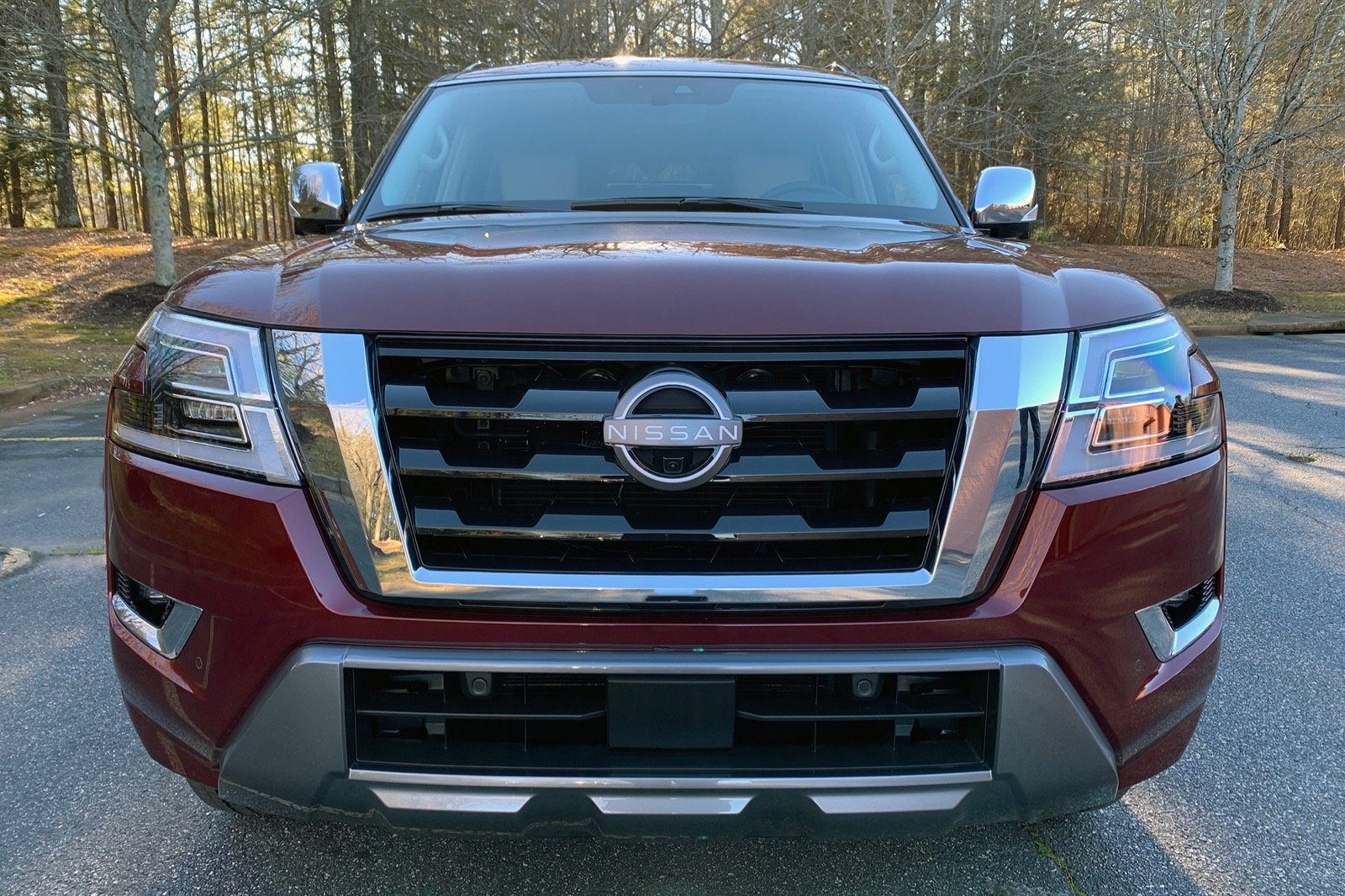 Nissan equips every Armada with its tried and true Endurance 5.6-liter V8 engine. Paired with a seven-speed automatic transmission, the V8 delivers 400 horsepower and 413 pound-feet of torque when running on premium fuel. Regular unleaded is recommended, which is bound to result in less powerful numbers.

The Armada comes standard with rear-wheel drive (RWD) and automatic four-wheel drive (4WD) is available. Though big and heavy—it maxes out over 6,000 pounds—the Armada is a capable off-roader. It has a skid plate up front that covers the radiator, double-wishbone front and rear suspension, Hitachi twin-tube shock absorbers, and 9.2 or 9.1 inches of ground clearance (depending on trim level). The SUV’s maximum angle of approach is 21.0 inches, the maximum angle of departure is 22.4 inches, and the maximum breakover angle is 20.7 inches.

The Armada drives like the big SUV it is. The handling continues to get better with every revision Nissan makes and driving on the highway is no longer the chore it was even just a few model years ago. The Armada's turning radius is about what you’d expect from an SUV of its size and age, and maneuvering it in a parking lot is the same; forward parking sensors are good but a forward-facing camera would be advantageous to the cause.

Every Armada comes standard with a seven-pin trailer harness plug with a connector for a brake controller. Trailer sway control is standard on Armada SL and Platinum, Trailer Brake Controller is available on Armada SV and up. When properly equipped, the SUV has a best-in-class 8,500-pound maximum towing capacity. 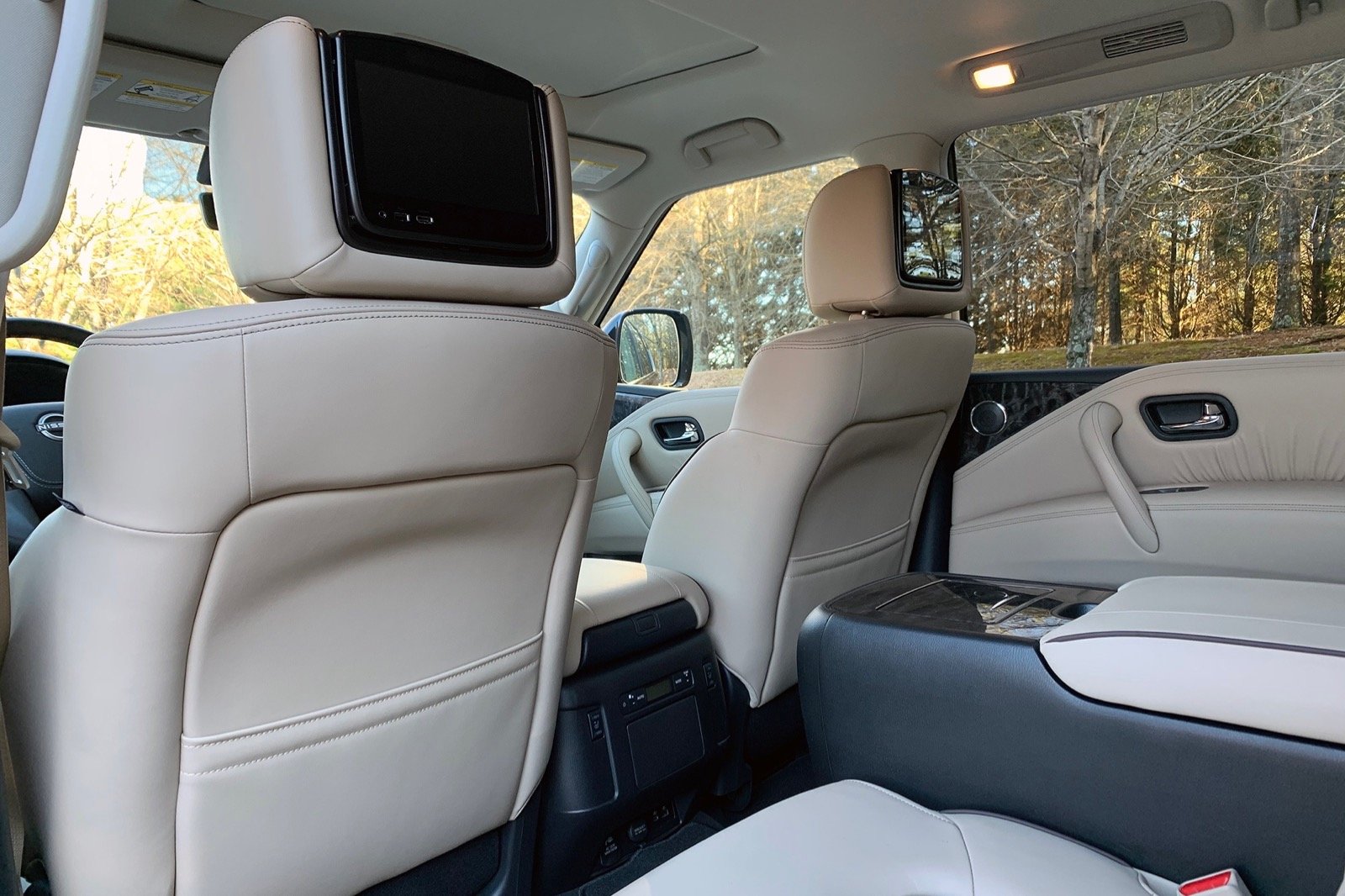 The Armada is Nissan’s flagship, offering the practicality and functionality that families on the go need. Like other full-size SUVs and trucks, you have to hop in and out of the interior. Standard running boards and in-cabin handles make the task an easy one.

As a full-size SUV, the Armada is naturally broad. This comes through most at the dashboard. The new standard 12.3-inch touchscreen places the seek/tune knob quite the distance from the driver. The same is true for the front passenger’s climate control dial.

In the mid-grade Armada SL and top-tier Platinum trim levels, buyers are able to get captain’s chairs in the second row instead of the traditional 60/40 split-folding bench seat. The second-row captain's chairs are far more comfortable than the bench, but opting for them lowers the maximum seating capacity from eight to seven. Third-row seating is not too comfortable for the average-sized adult thanks to less-than-optimal legroom, but they can fit back there in a pinch.

A power liftgate and power-folding third-row seats are an add-on. The Armada’s cargo area is most limited by the high load floor, which makes loading and unloading a chore for petite adults and is an obstacle to getting kids to help with the task. The high load floor also makes the liftgate rise higher than is optimal for petite individuals.

Small-item storage in the cabin isn’t great. If you are one of those people who likes to see their smartphone while they drive, there’s no place for it other than taking up a cupholder in the center console between the front row seats. It’s either that or putting it up on the hidden wireless charging pad under the climate controls, where it can hardly be seen at all.

The exception to the rule is the SUV's center console storage bin, a deep storage area that comfortably holds a purse or a mess of cords.

There are nine cup holders and four bottle holders in the Armada. 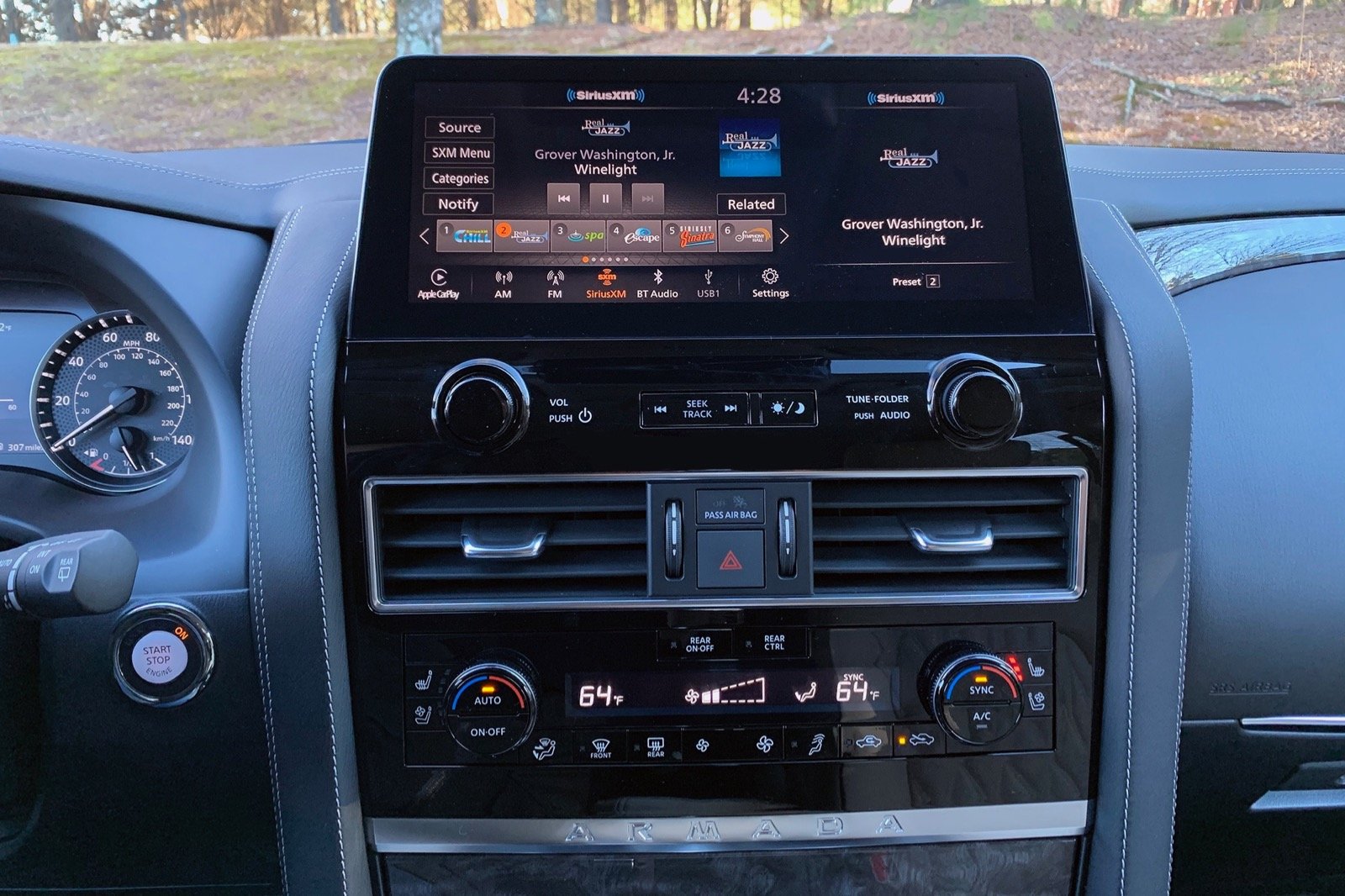 Nissan has upped the tech in the Armada as part of its refresh. The 12.3-inch infotainment touch screen is the largest in its class and properly responsive. The size lends itself to a clear look at the views provided by the car’s camera system. Navigation, a six-speaker stereo system, satellite radio, Bluetooth, USB Type-A and Type-C ports, a WiFi hot spot, NissanConnect Services, keyless entry with push-button start, Android Auto, and wireless Apple CarPlay are standard.

A wireless device charging pad, 13-speaker Bose audio system, rearview camera mirror, and a seatback second-row entertainment system are available. The camera mirror allows for the Armada's rearview mirror to be viewed as either a traditional mirror or with a moving image as seen by the rearview camera. A simple lever switch enables the functionality. Armada Platinum gets all those goodies as standard.

An analog tachometer and speedometer sit in front of the driver while a functional but relatively unattractive steering wheel allows for limited control of the driver information screen and some infotainment system functions. The wheel isn’t as sleek or sophisticated as what you’ll find in other SUVs, even in the Nissan lineup, but it does the job. 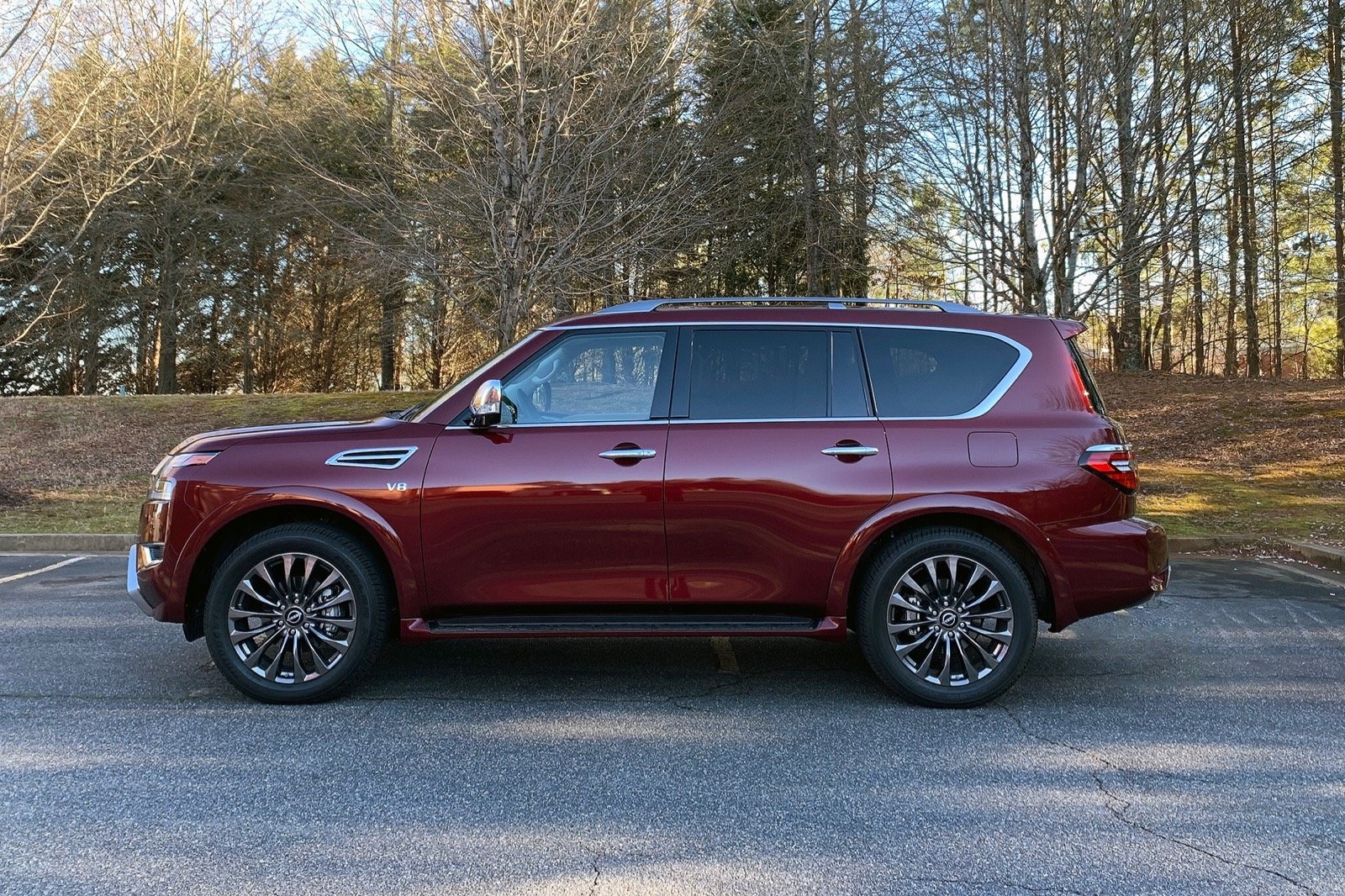 The Insurance Institute for Highway Safety (IIHS) and National Highway Traffic Safety Administration (NHTSA) have yet to rate the Armada in nearly every category. The NHTSA has given the SUV a three-star rollover rating, which is the result of the Armada’s calculated 23.7-percent rollover risk.

Every Armada is equipped with Nissan Safety Shield 360, a suite of driver-assist and safety technology that includes automatic emergency braking with pedestrian detection, blind-spot warning, rear cross-traffic alert, lane departure warning, automatic high beams, and rear automatic braking. While the lane departure warning system can be overly zealous, the automatic high beams technology is the opposite, often taking far too long to activate on darkened roads when dim street lights are present.

Unlike some of its competition and stablemates, the Armada is not available with advanced driving assist technologies like Nissan ProPilot Assist or Super Cruise. 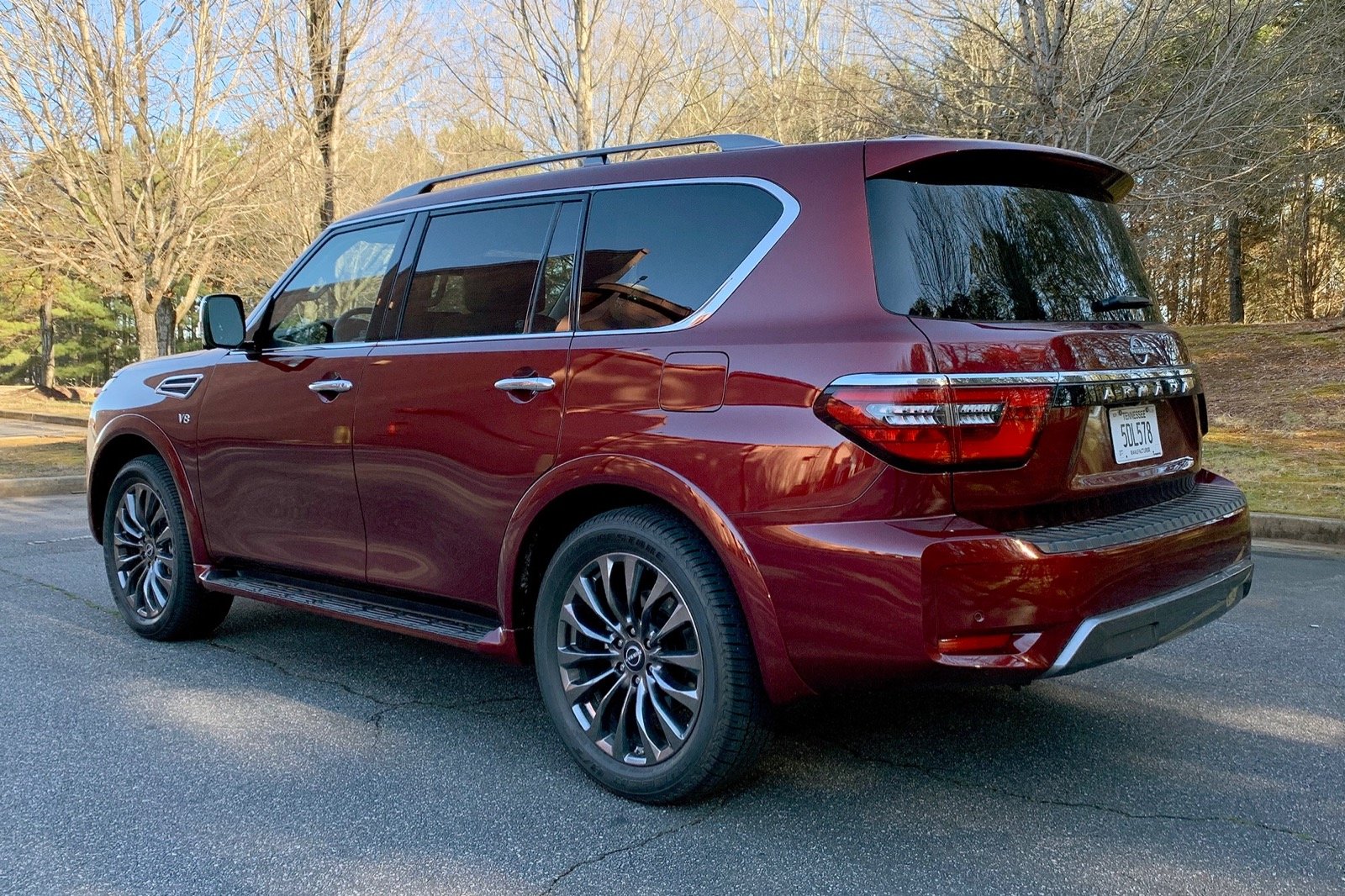 On the surface, the MSRP of the Nissan Armada is competitive. However, digging deeper, one quickly sees that the similarly priced Chevrolet Tahoe and Suburban have more engine options, better tech, and nicer appointments. The same is true for the GMC Yukon and Ford Expedition.

The Toyota Sequoia is almost equally priced to the Armada and suffers from many of the same faults. To its credit, the Nissan has more standard safety technology and a better infotainment system.

If you don’t need the towing capability of the Armada, you’ll want to cross-shop the Kia Telluride, Hyundai Palisade, and Dodge Durango against the model. Pricing for those models is generally lower than the Armada, except in select high-performance grades.

For those that like the looks and capability of the Armada but truly want a luxurious interior, shoppers will want to take Infiniti QX80 for a test drive. The QX80 and the Armada share a powertrain but the QX80 is better-appointed with different infotainment technology.

Want more off-road capability? Stay tuned for the upcoming Jeep Wagoneer, which may cost more but is likely to pack a heck of an off-roading punch.

Have you driven a 2021 Nissan Armada?
Rank This Car

Enter your zip to see incentives for a new Armada in your area.