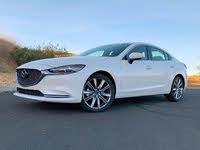 Looking for a New Mazda MAZDA6 in your area?

The alluring yet anonymous 2021 Mazda6 is not the obvious choice in the midsize sedan segment. But for people who love to drive, it is an irresistible choice. 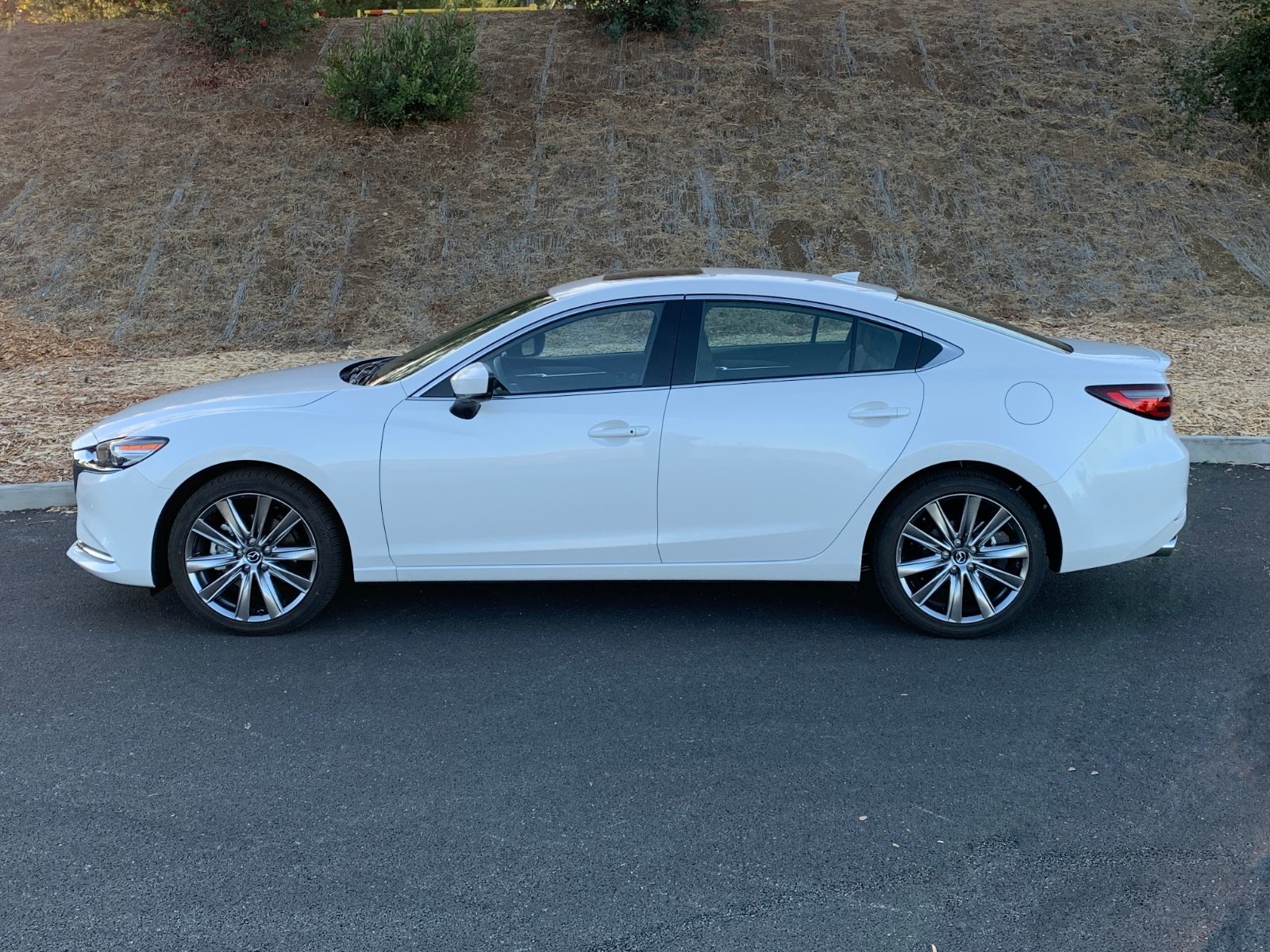 The Mazda6 hasn’t been completely redesigned since 2014, making it one of the older members of the midsize car class (only the Volkswagen Passat has more wrinkles). And while this great-looking car is not a top-seller in its segment, making it a relative rarity on the road, it’s also been around long enough that what once was a daringly seductive design is now as familiar as favorite comfort food.

But don’t let this familiarity make you indifferent to the Mazda6’s long list of charms. Inside and out, this Mazda remains one of the more stylish and high-quality choices in a family-sized four-door, and when you drive it you can’t help but have a great time behind its perfectly shaped steering wheel. The 2021 Mazda6 might be older than other choices in its class, but it’s still better than most of its competitors. Especially in the athletics department. 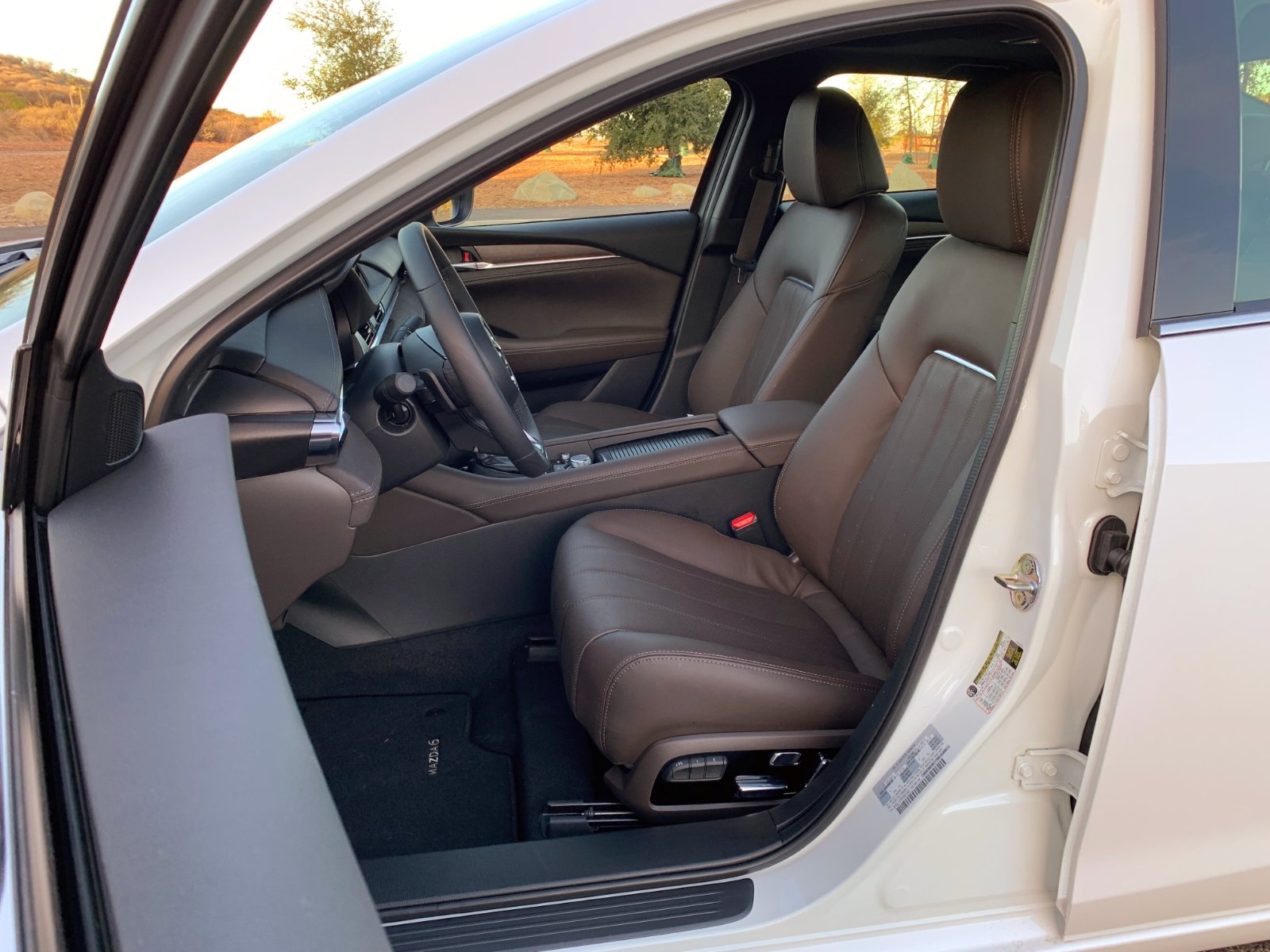 Mazda sells the 2021 Mazda6 in Sport, Touring, Grand Touring, Grand Touring Reserve, Carbon Edition, and Signature trim levels. The Sport and Touring have a 186-horsepower Skyactiv 2.5-liter four-cylinder engine, while the rest get a turbocharged, 250-hp version of that powerplant. Pricing ranges from $24,325 to $35,750, plus a mandatory destination charge of $945.

The Mazda6 Carbon Edition ($32,800 plus destination) is new for 2021, added to spice up your driving life with exclusive Polymetal Gray paint, red leather and contrast stitching, and black metallic wheels. It’s based on the Grand Touring Reserve trim level, meaning it comes with just about everything as standard equipment.

Our test vehicle was the top-shelf Mazda6 Signature wearing extra-cost Snowflake White Pearl Mica paint. It rang up to $37,090 MSRP, including destination.

Mazda gave the Mazda6 a facelift for the 2018 model year, adding greater presence and precision to its alluring styling. The car is aging as gracefully as Halle Berry and George Clooney.

This timeless appeal is true of the minimalist interior, too, which exudes quality, class, and sophistication. Only the first-generation Mazda Connect infotainment system gives the car’s age away, but once you push the engine start button to the left of it, shift the robust transmission lever into Drive, and accelerate, that doesn’t much matter. 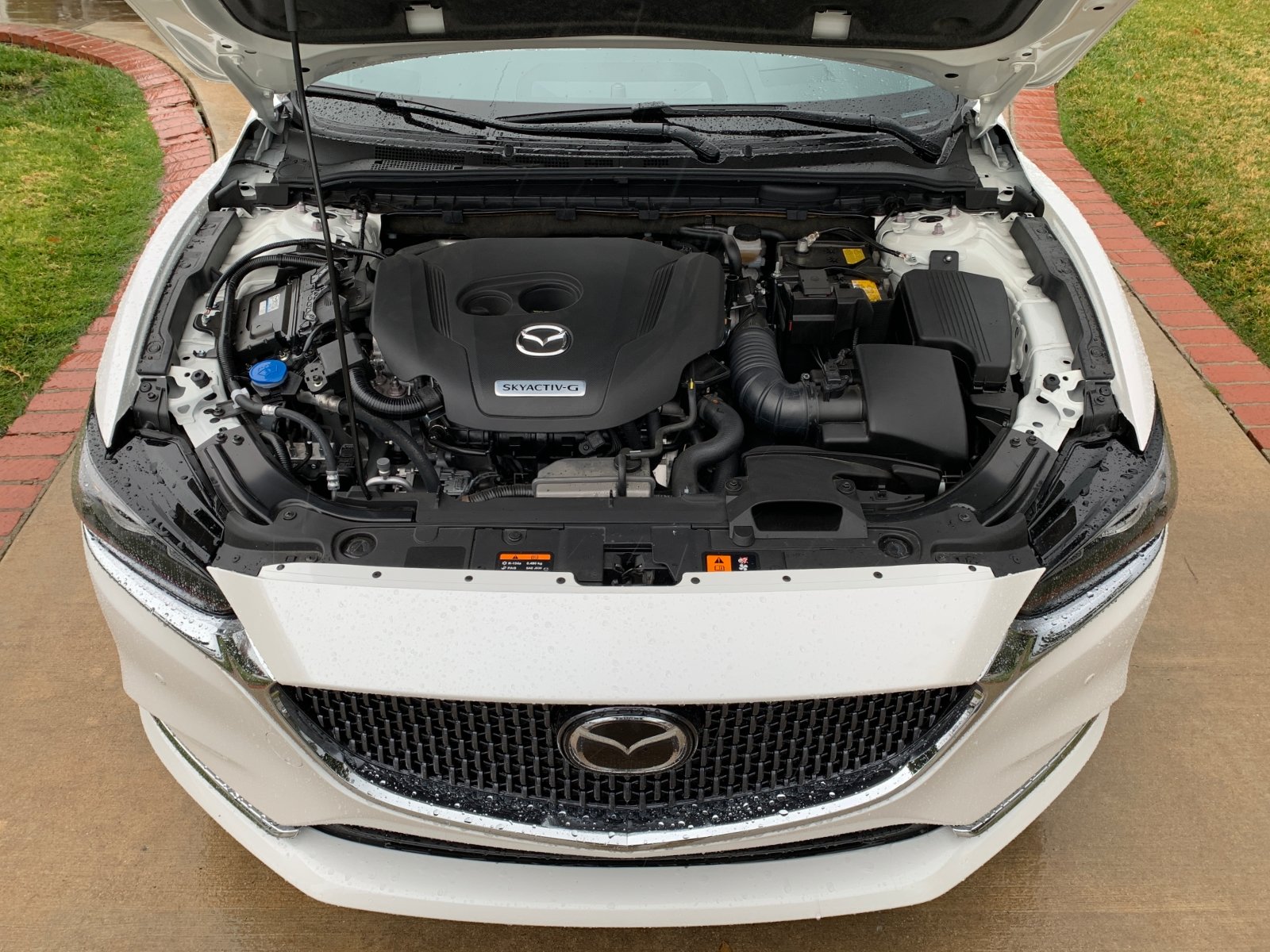 Most versions of the 2021 Mazda6 have a turbocharged 2.5-liter four-cylinder engine under their long and shapely hoods. Run it on 93-octane fuel, and it makes 250 hp and 320 pound-feet of torque. Choose 87-octane gas, and those numbers drop to 227 hp and 310 lb-ft of torque.

Go ahead and save money at the pump. Torque is what you feel when you accelerate. It’s the force that pushes you back into your seat as a vehicle thrusts forward, giving you that thrill as you rush to speed. Pumping regular into the Mazda6 Turbo results in a loss of just 10 lb-ft of torque, and you won’t notice anyway because the 310 lb-ft arrives at 2,000 rpm compared to 2,500 rpm for the full 320 lb-ft.

Either way, the EPA says a Mazda6 Turbo gets 26 mpg in combined driving. That matches nicely with our testing result of 26.1 mpg.

A six-speed automatic transmission with a Sport mode delivers the power to the Mazda6’s front wheels. All-wheel drive (AWD) is not available, a bummer since this car could be more entertaining to drive with a torque-vectoring AWD system, similar to the Acura TLX.

That’s where Mazda G-Vectoring Control Plus (GVC-Plus) comes in. It continually monitors driver inputs and vehicle behavior, and it uses short and subtle braking action to adjust the driving dynamics for smoother, more predictable ride and handling qualities. GVC-Plus works to terrific effect, quelling unwanted body motion and making the car feel utterly natural, as though it is hard-wired to the driver’s nervous system.

Don’t mistake the Mazda6 as a sports sedan, though. This car is quick but not outright fast, and though handling is beautifully controlled the Mazda6 offers a compliant ride on its P225/45R19 all-season tires.

As a daily commuter, the Mazda6 adds engagement and fun to every trip. During highway slogs, it is a comfortable long-distance cruiser. And though you won’t be inspired to autocross a stock Mazda6 on weekends, it certainly is a delight to drive whenever you decide to take roads less traveled. 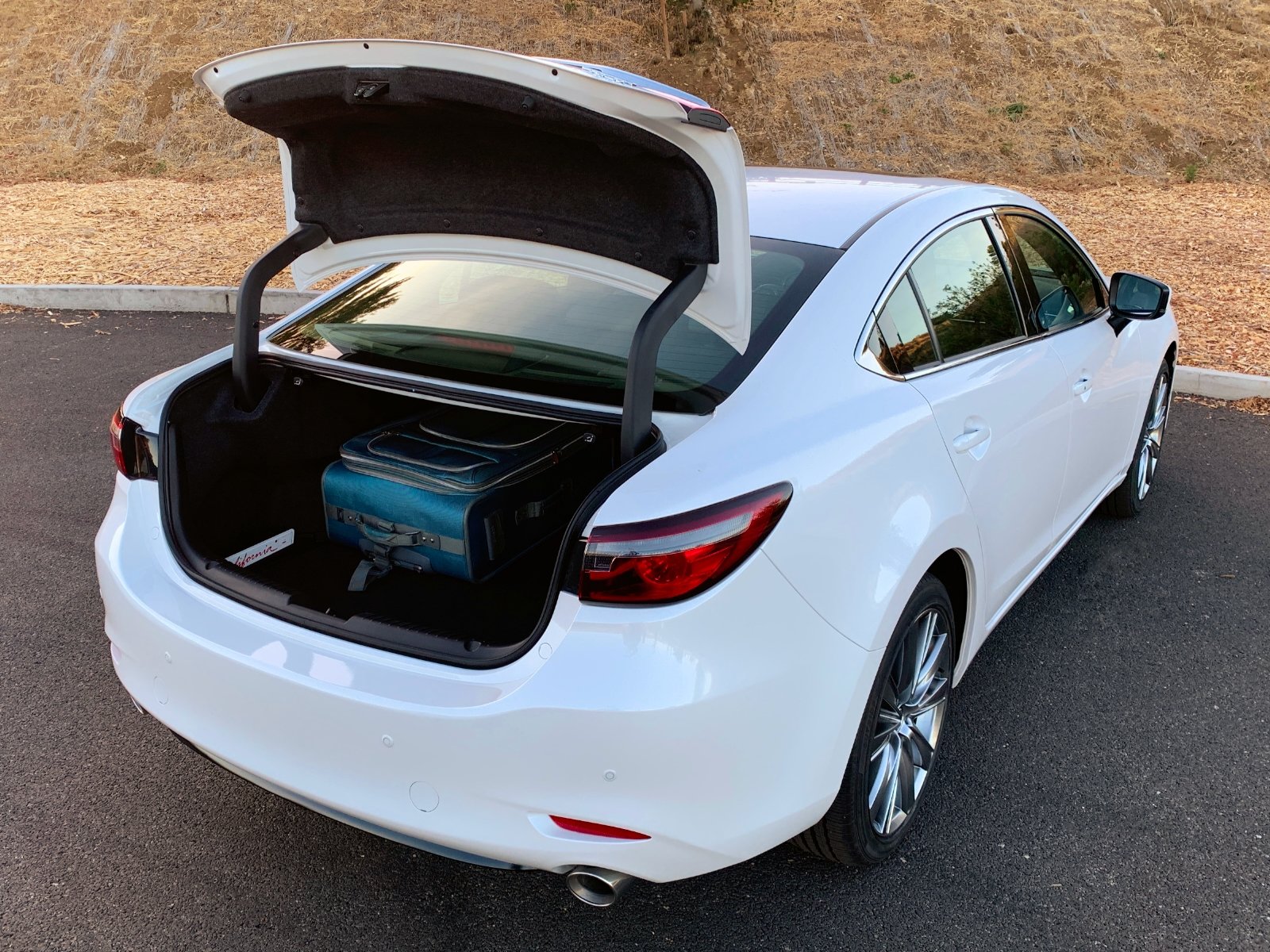 Among midsize sedans, the Mazda6 falls on the smaller side of the scale. But that doesn’t mean it isn’t comfortable for both the driver and passengers.

Furthermore, Mazda designs everything around the driver, from the seat construction and the type of accelerator pedal it uses to the steering wheel’s shape and the clarity of the instrumentation. Thin windshield pillars, large side mirrors, and clear sightlines foster driver focus, and, for the most part, the controls are easy to use without looking away from the road ahead.

By measurement, the Mazda6’s rear seat appears less hospitable than some competitors. But get in, and you’ll find outstanding support combined with adequate room for your legs and head. Air conditioning vents help to keep you cool, and the test car’s rear center armrest contained cupholders, a small storage bin, and the buttons for the seat heaters.

Storage space is acceptable. The padded center console has a clean, organized appearance with a tambour cover over the cupholders, a tray forward of the shifter, and a small bin underneath the armrest. Front and rear door panel bins, and small trays in each door armrest, add to the number of locations in which you can stash your stuff.

At 14.7 cubic feet, the Mazda6’s trunk is one of the smallest in the midsize sedan segment. However, the trunk floor is spacious, and Mazda hides the trunk hinges, allowing you to pack it full without concern that you’ll crush your belongings. Mazda also provides a handle to close the trunk lid, which means you don’t need to put your fingers on the dirty outer portion of the lid. 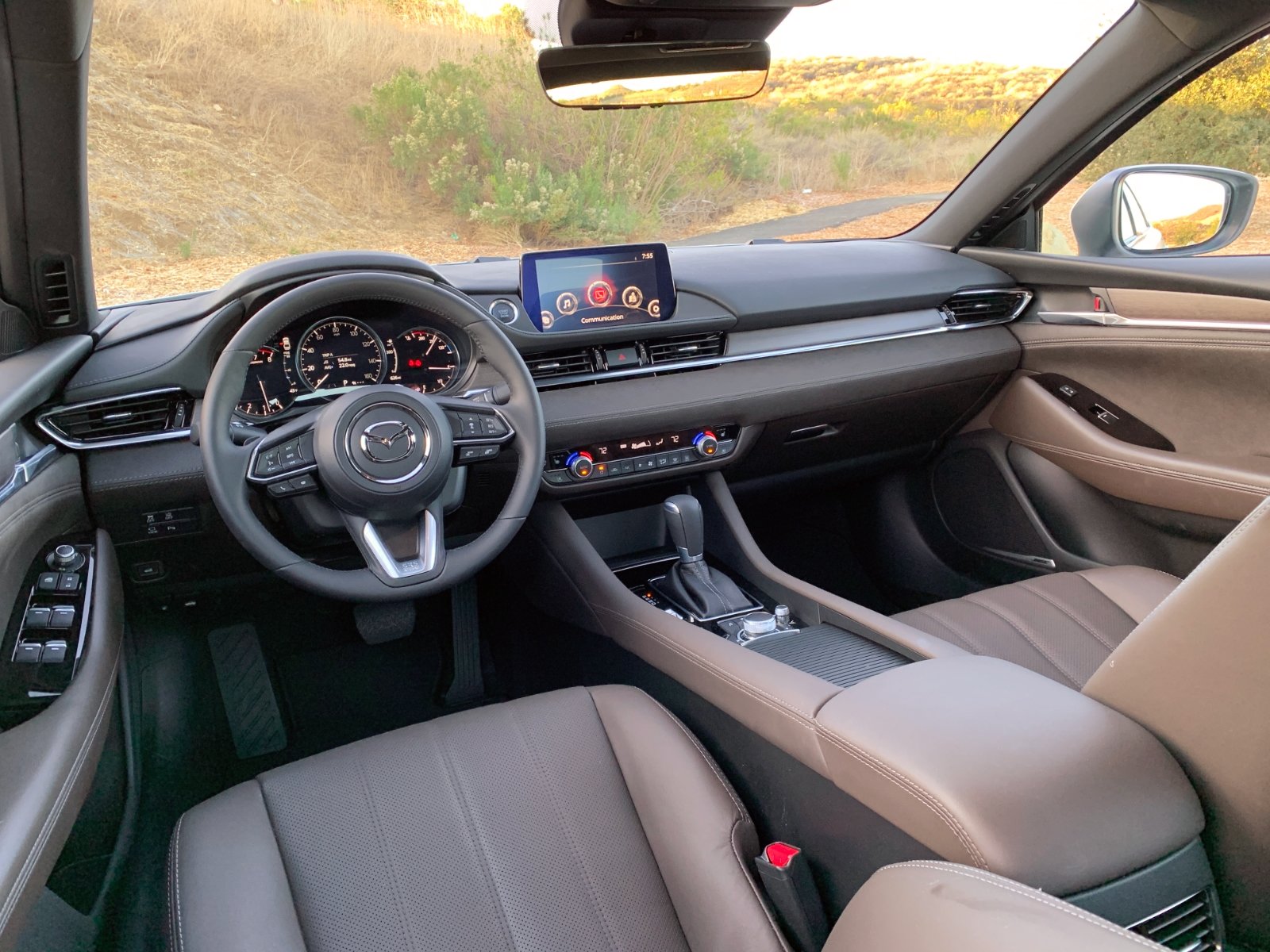 Depending on your perspective, the Mazda6’s infotainment system is either a cause for celebration or a reason to choose a different vehicle.

This aging car uses the most advanced version of the first-generation Mazda Connect design. It has an 8-inch screen instead of the 8.8-inch display found in most other Mazdas, and it doesn’t come with the new Mazda Connected Services technology that supplies remote engine starting, automatic 911 calling, a vehicle finder, a WiFi hotspot, and other modern features.

Though it’s not as sophisticated in terms of its appearance and functionality, we find this simpler version of Mazda Connect easier to use. However, people new to the Mazda brand are going to be disappointed with the acclimation period to this technology.

To operate the system while you’re driving, you use the knobs and buttons on the center console, the steering wheel controls, or specific voice commands. Mazda Connect does not support natural language recognition and, even though there is ample room for them, there aren’t any separate stereo controls on the dashboard. Plus, because Mazda wants the driver to focus on the road rather than fiddle with the technology, it disables the touchscreen function when the car is moving.

Despite having spent lots of time driving lots of Mazdas, the company’s approach to its infotainment technology still irritates me. If it won’t offer touchscreens or additional physical controls on the dashboard, the automaker needs a natural voice recognition system along the lines of Mercedes-Benz User Experience (MBUX) or BMW Intelligent Personal Assistant, like, yesterday. 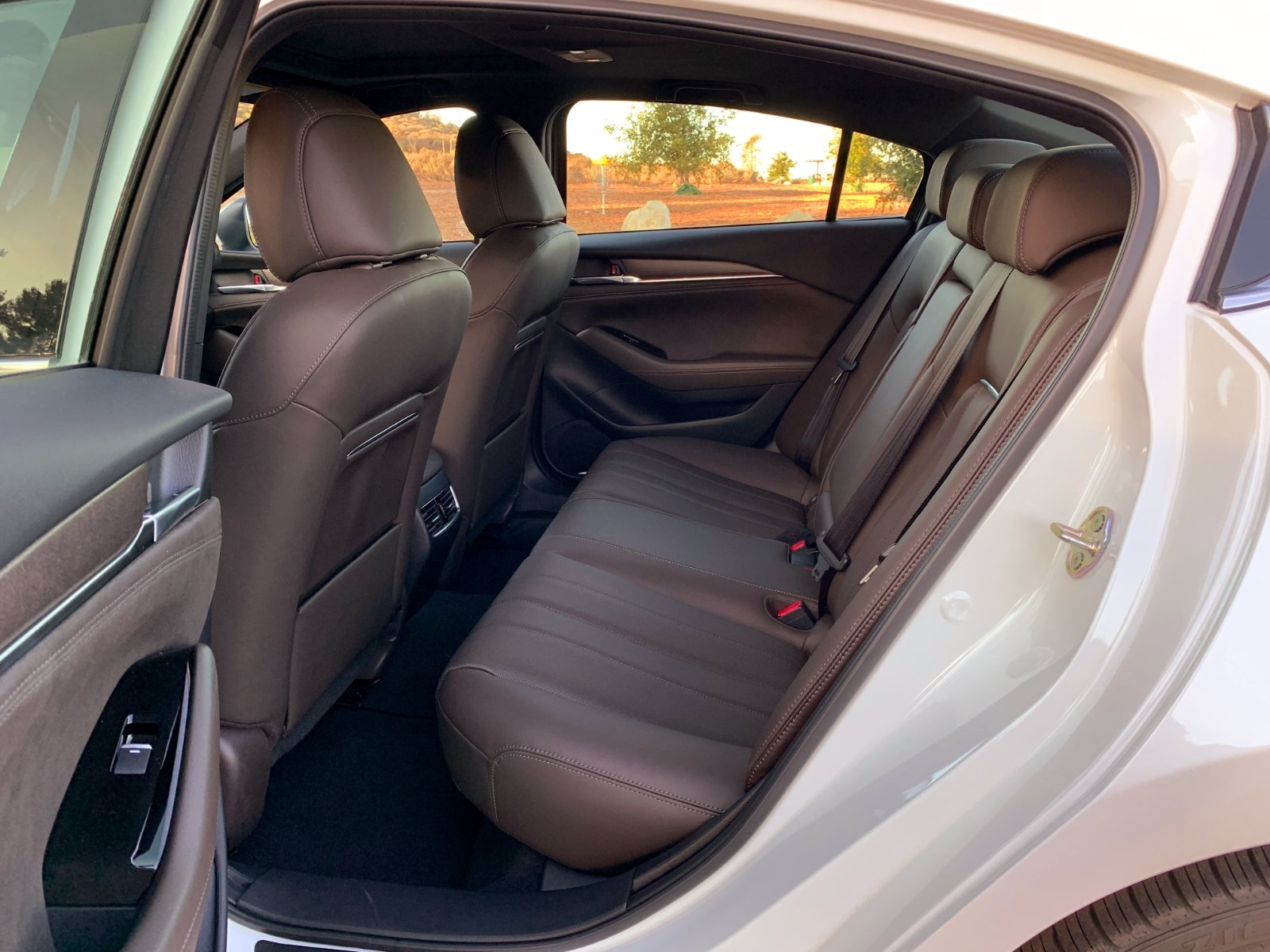 With that Mazda Connect rant out of the way, let’s take a closer look at the Mazda6’s safety technologies.

Starting with the Grand Touring Reserve trim, the Mazda6 adds adaptive headlights that help the driver to see around dark corners and curves, a wiper de-icer system, and an Active Driving Display (head-up display) that projects important information on the Mazda6’s windshield. One thing we really like about the Active Driving Display is that it shows blind-spot warning data, which means you don’t need to look away from the road in order to know that it’s unsafe to execute a lane change.

In use, i-Activesense is smooth, accurate, and predictable, though in heavier traffic it displays some braking and acceleration inconsistency as it manages the following distance. In the Mazda6, i-Activesense does not include a lane-centering function, which some competitors offer. That’s fine by us, but some buyers might want that feature.

Though the Mazda6 is an older design, it still performs well in crash-testing. The Insurance Institute for Highway Safety (IIHS) gave the Mazda its highest "Top Safety Pick+" rating for the 2020 calendar year (2021 ratings were unavailable as this review was written.) Similarly, the National Highway Traffic Safety Administration (NHTSA) gives the Mazda6 its top five-star rating in nearly every assessment. 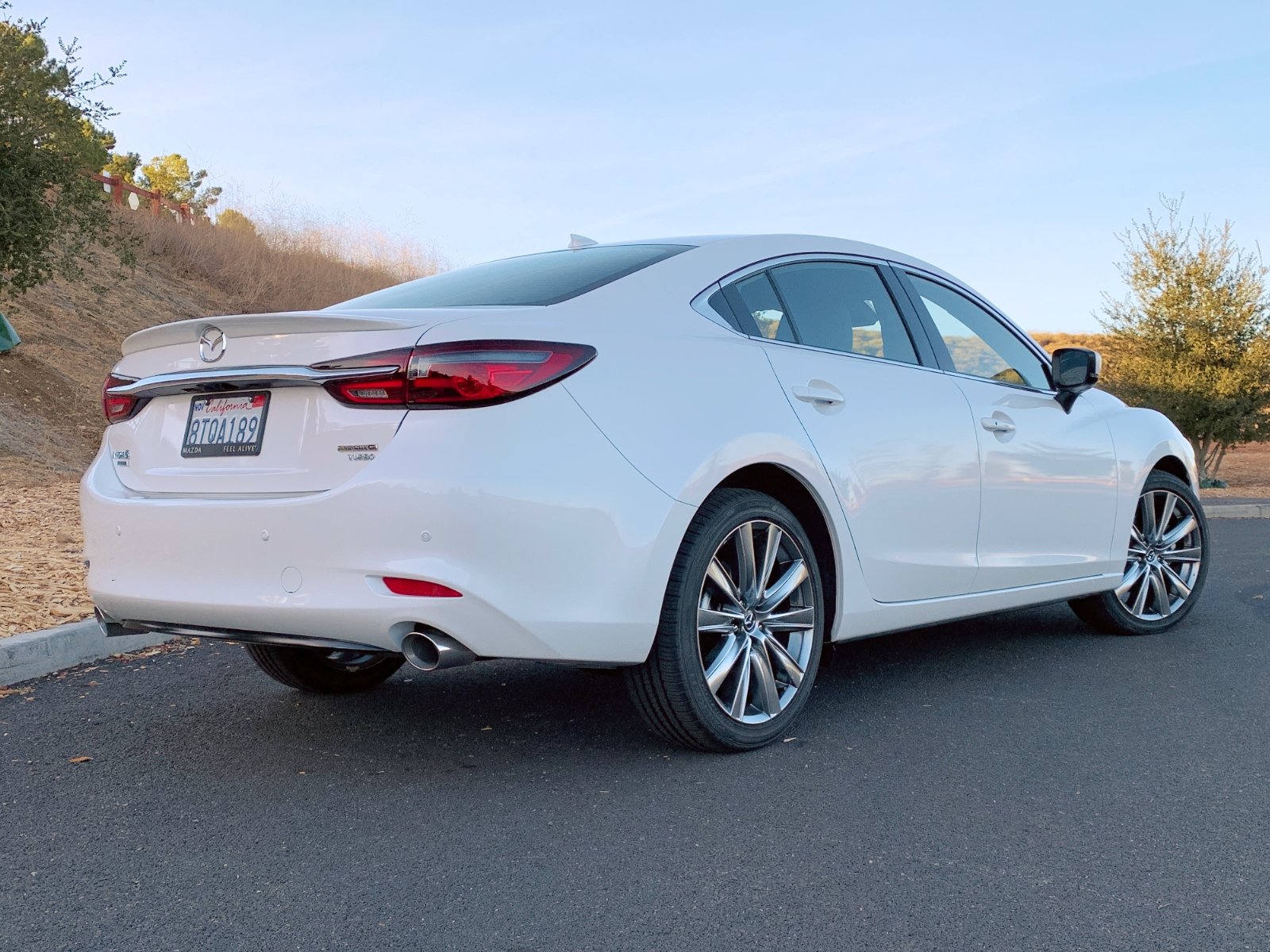 Though Mazda would certainly like to sell more examples of the Mazda6 than it currently does, the automaker isn’t seeking to buy market share through long warranty programs, extended free trials of services, or no-cost maintenance offers.

Instead, it chooses to generously equip each version of the 2021 Mazda6, charge a reasonable price, ensure that it is safe, and infuse it with enjoyable driving dynamics that make every errand, commute, and trip worth taking. Mazda also adds value through the typical lease, rebate, and low-rate financing offers used by other automakers, but not to the same deep-cutting extent. And with the Signature trim level, Mazda provides what is essentially a luxury car at a mainstream price.

It’s almost as though Mazda is confident rather than desperate, worried less about selling as many examples of the undeniably stylish Mazda6 as is possible and more about thoroughly satisfying the customers drawn to this alluring wallflower of a family sedan. This car, to the right buyer, is downright irresistible.

Have you driven a 2021 Mazda MAZDA6?
Rank This Car

Enter your zip to see incentives for a new MAZDA6 in your area.