Looking for a New Lincoln Navigator in your area?

A luxury apartment with four-wheel drive and comfier seating. 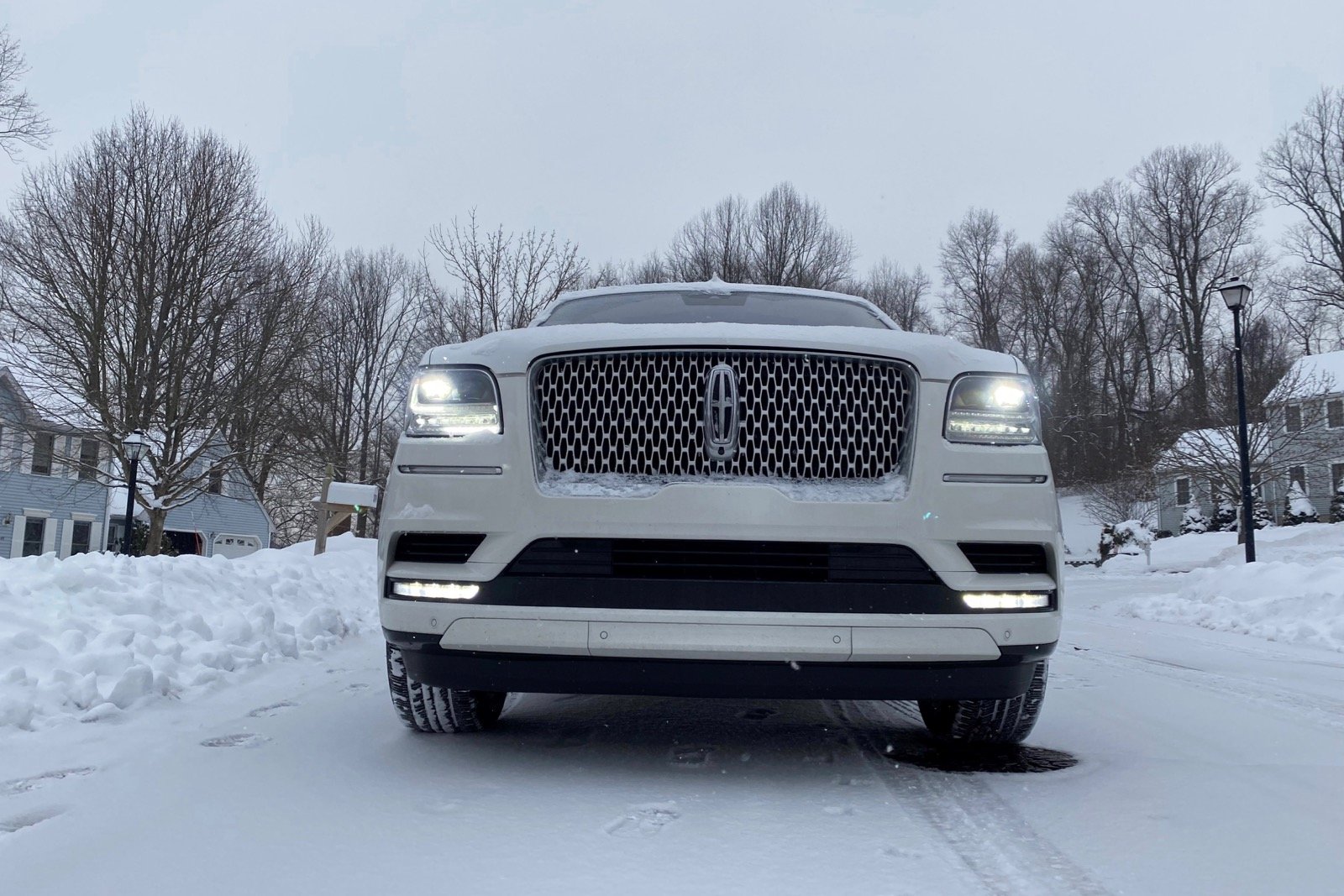 Full-size SUVs like the Lincoln Navigator represent the smallest slice of the luxury SUV market. They're the heaviest, hugest, and fanciest people movers sold by mainstream automakers—and you can count them all on two hands. The Navigator, a popular nameplate since 1998, was redesigned in dramatic fashion for 2018. In its fourth model year, this Navigator still delights us as we test newer competitors costing at or above its $77,000 starting price. Foreign nameplates offer no equal to the Navigator, and it's not for sheer size or a desire to lift up Lincoln that we say this is one of the best American vehicles, among both trucks and cars, ever made. 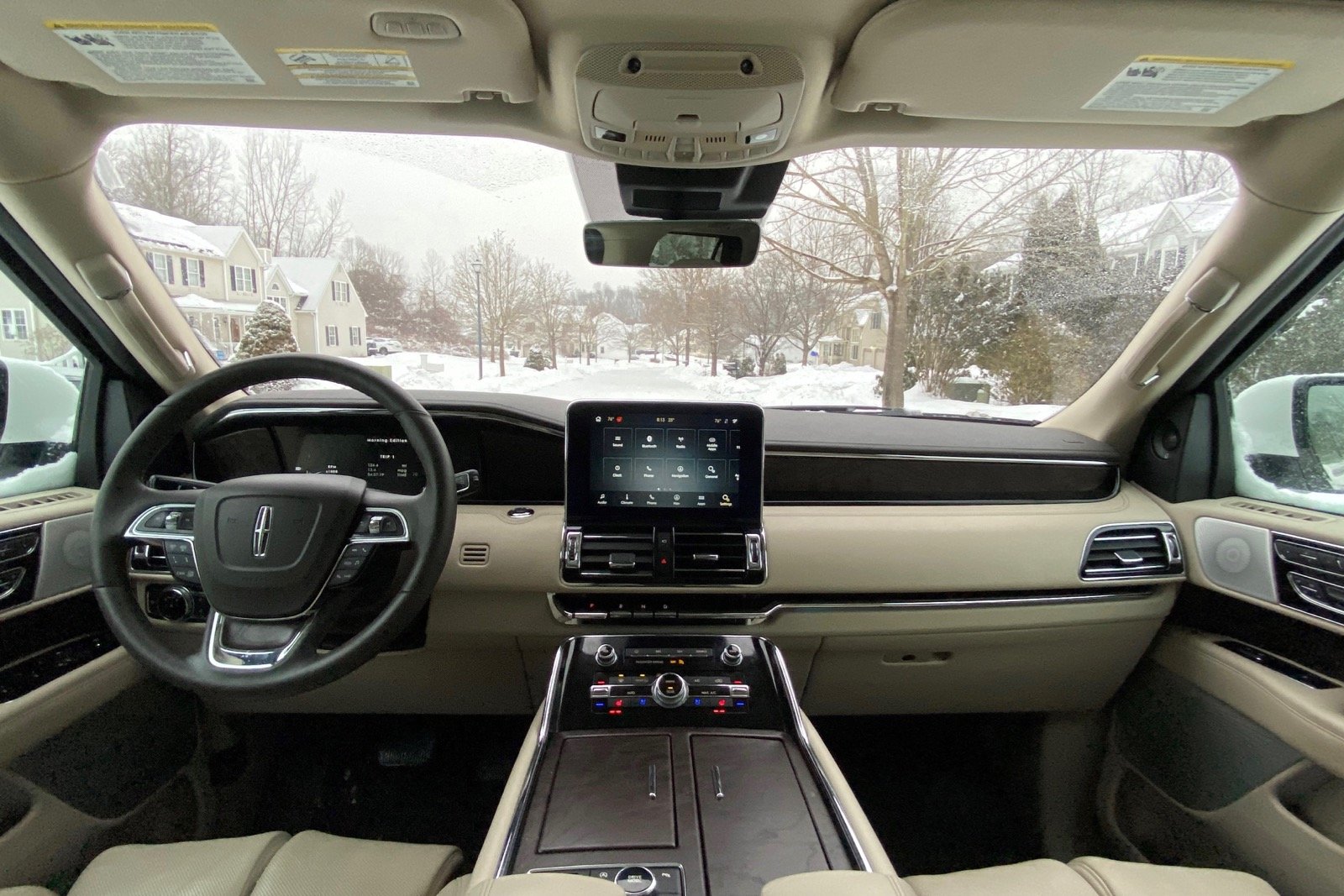 Past Navigators looked like dressed-up Ford Expeditions because that's mostly what they were. The current Navigator shares its side glass and overall footprint with the Expedition along with the general shape of the rear seats. No points off there. Else, the Navigator is like nothing else Ford makes, not even the turn signal stalk. One glance and another (big) step inside are enough to convince anyone, including people with Benzes and Ranges, that our Navigator Reserve is worth every dollar of its $92,000 MSRP. It's built by Ford and yet never feels like one.

The theme is elegance and understatement—not easy to pull off on a three-ton truck that blocks the sun and rides on 22-inch wheels. Simple rectilinear shapes define the grille—body-color on the Monochromatic Package—windows, headlights with their double sweeping LED running lights, and full-width taillight assembly. A few splashes of chrome for the door trim, grille, and the fender logos keep things classy. Our Pristine White example with the white-painted grille, black wheels, and illuminated Lincoln logo was the perfect snowmobile during our winter test across Connecticut and Massachusetts. The Navigator puts on a small light show when you unlock or lock the remote, with gentle fades and big spotlights on either side of the powered running boards.

The interior impresses. Seven color palettes, especially the Slate Gray of our test truck, show a taste for finer details. The way the wood trim is layered behind the 10-inch touchscreen, or how the push-button gear selector blends into the center stack, the floating center console with its chromed switches, or the minimalist digital instrument panel—it's muted and modern.

Materials are very good and panel gaps are tight. Black Label trims step it up further with more textures on the seats and softer leather covering the dash and door tops—and they're wilder, too (one has a mix of light blue leather and white wood). The Perfect Position seats have backrests curved like a one-piece bucket you'd find in a sports car, only the cushions are separated and elevated from the frame. That's because they can adjust in 30 mind-bogglingly different ways. Fully loaded, there are very few trucks this big that feel better inside. A Range Rover can be more sumptuous, but it's a lot smaller—and it can cost double the max $109,000 price of the Navigator Black Label. 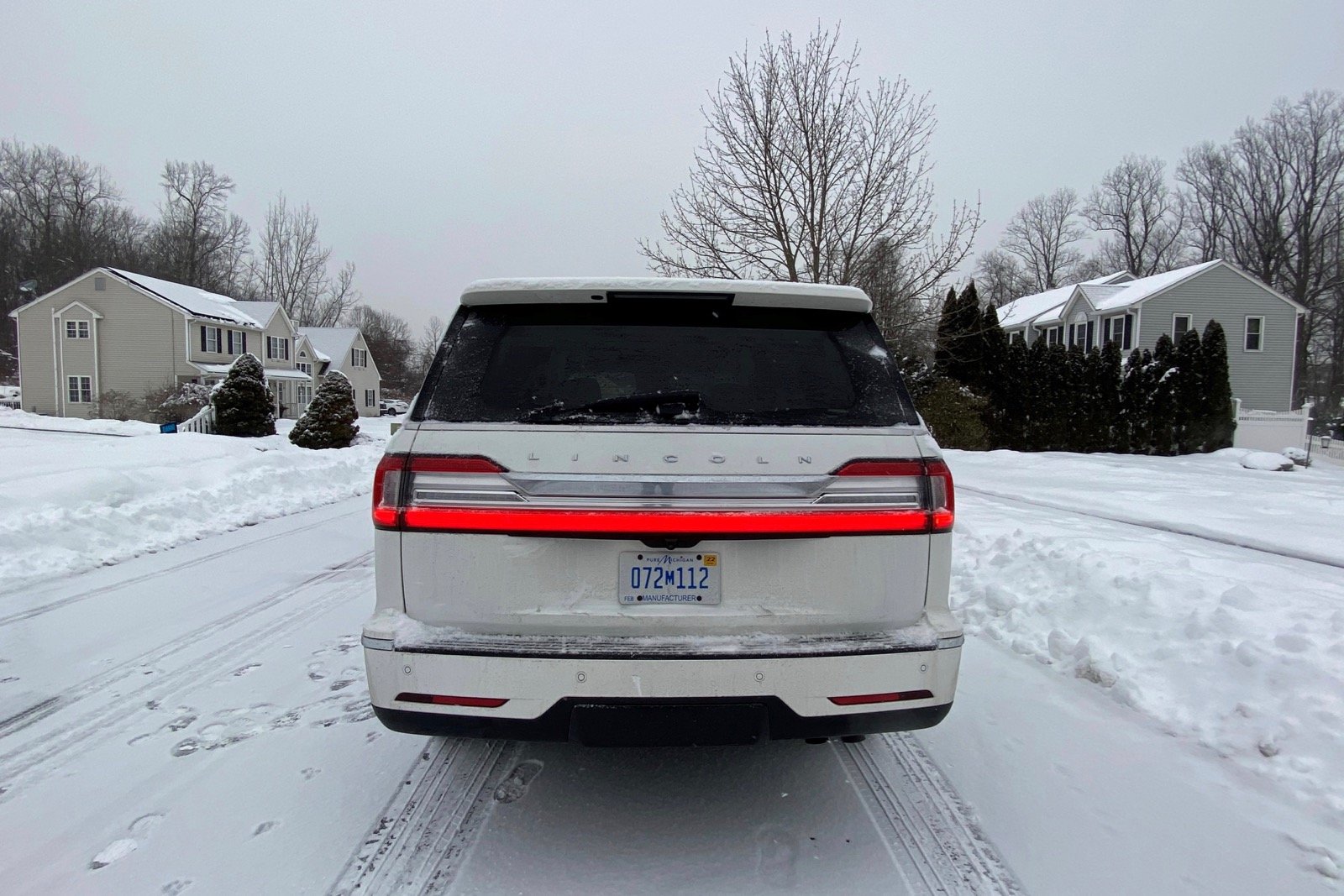 One engine is on tap, and it's incredible: The twin-turbo V6 from the Ford Raptor! With only 3.5 liters of displacement, this boosted six cranks out 450 horsepower and 510 pound-feet of torque. It's more than enough to make the Navigator feel sprightly—and it sounds terrific, with enough intake snarl and turbo whoosh coming through the truck's highly insulated cabin. Paired with a 10-speed automatic transmission in either rear-wheel drive (RWD) or four-wheel drive (4WD), the Navigator responds much faster than its size suggests. Its 4WD system doesn't bind when circling a tight turn at low speeds—and it's smoother at switching between RWD and 4WD High than its General Motors competitors. Towing capacity is also giant: 8,300 pounds on 4WD models or 8,700 pounds with the RWD model.

Fuel economy is appropriately awful and no better than GM's larger V8 engines. We averaged in the teens, which fits the EPA-estimated 17-mpg combined rating (16 city, 20 highway). Adaptive dampers come standard but the suspension feels rudimentary compared to the Escalade's magnetic shocks and air springs. The Navigator doesn't have the supple ride over bad pavement like you'll find in Lincoln's smaller SUV, the Aviator, which comes equipped with an air suspension. Sometimes a bump will shake the Navigator's structure with a loud bang. The steering is looser without the controlled, precise feel you'll find in the Escalade and so are the brakes—they feel too soft on initial application. It's not enough to make the Navigator feel unwieldy. It's only that the Navigator doesn't exude the superior control offered by Cadillac, which is the big SUV benchmark for handling.

Because the Navigator's low-end thrust feels like a freight train and its quiet cabin is so plush on the highway—the proper route for any vehicle this huge—we're less concerned with nimbleness and steering feel as we are amazed by its overall refinement and power. Also, the paddle shifters add some semblance of sportiness with their quick reaction time and rev-matched downshifts. 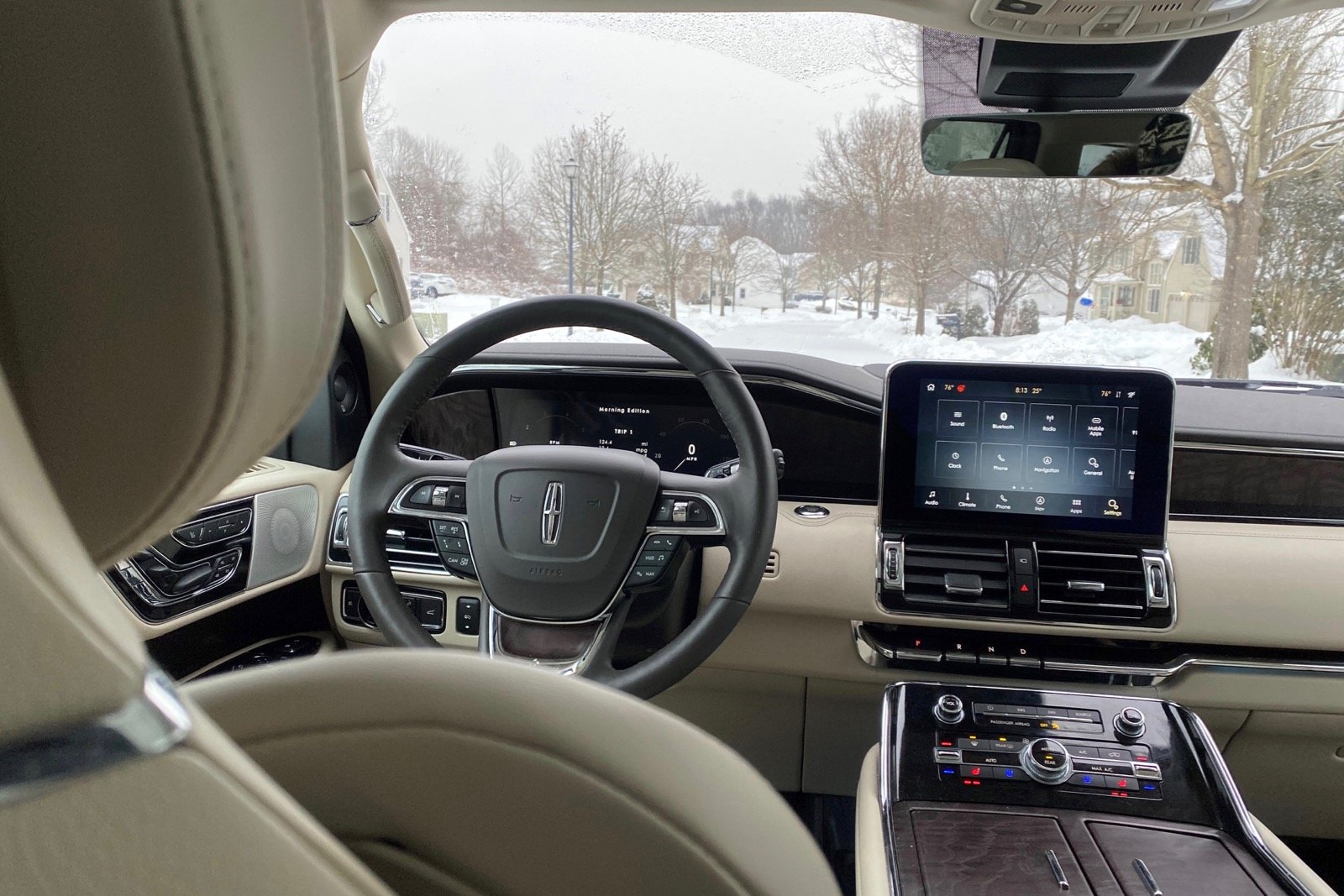 The Navigator has the square footage of a small bedroom, and it's shaped like one. It's a tall box, which can house six adults and all their arms, heads, and legs with ample space. This is technically a seven-passenger SUV, but you won't put anyone but a child in the third row's middle seat, which power folds and raises. Manually-reclining and tilting captain's chairs come standard for the second row and a bench is optional, for a possible total of eight passengers. The box shape helps with cargo space—19 cubic feet behind the third row, 57 behind the second, and 103 in total. The 2021 Cadillac Escalade has an even bigger cargo hold, but you can opt for the long-wheelbase Lincoln Navigator L for 34, 73, and 120 cubic feet of respective storage. The rear glass opens separately from the tailgate, a convenient feature when you've crammed the back with bags and can't risk anything spilling out. Dogs will love it, too.

Our Navigator Reserve had heated rear second-row seats and a three-zone climate. The second row has an optional console that mimics the front with integrated climate and stereo controls, but German competitors are offering five zones and heated seats for the third row. There were no side window shades, either. Because the Navigator lets you remove the second-row seats for max storage, they don't electrically recline—which we think they should do (and cool and massage) at least as an option. No vehicle in the segment does this aside from a $161,000 Maybach GLS600, but consider this a wish-list for the next Navigator.

The front seats—they're sumptuous and cosseting like the best down-filled pillows. The adjustments are insane: separate left and right thigh extensions, thigh bolsters, torso bolsters, an upper backrest tilt that's separate from the main backrest, a four-way headrest, three-way lumbar, and two massage programs. When you're not falling asleep in these chairs, the Navigator's large windows and high driving position make visibility a snap. Parking, of course, is a bear. The 360-degree cameras are fuzzy but they aren't the issue. This is a bus. 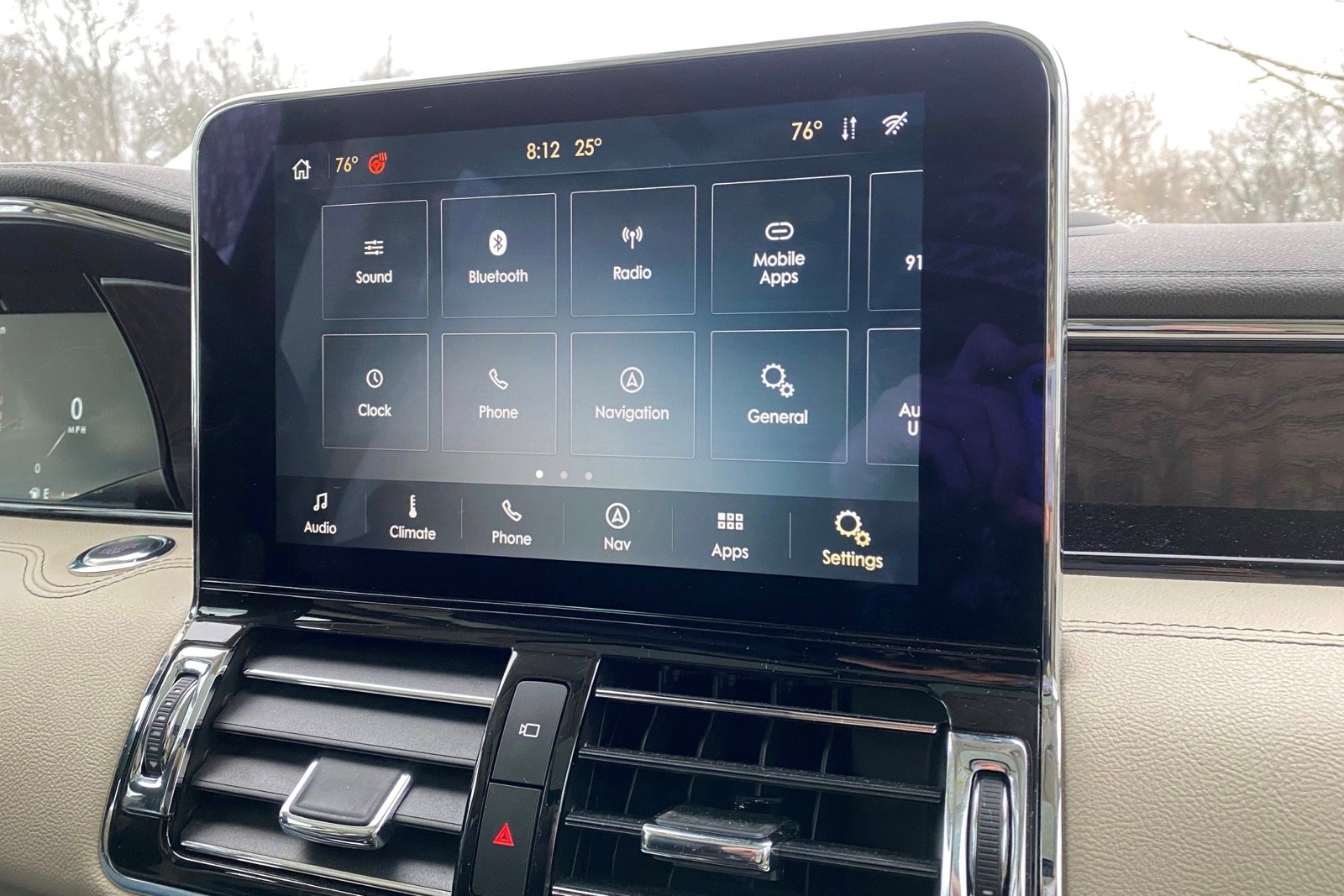 It's telling how fast technology moves when a 10-inch touchscreen looks tiny. Compared to the multi-piece, curved LEDs on the new Escalade that are motion-sensitive and project augmented reality with 4K resolution, the Navigator feels old. The instrument panel can't show full-screen maps or different designs, the cameras are low-res, and the infotainment can't wirelessly connect to Apple CarPlay or Android Auto. The 20-speaker Revel Ultima stereo is merely good, not exceptional.

But this doesn't mean bad. The software is intuitive and shares its basic interface with Fords, but with a new skin that makes it feel unique to Lincoln. It's a tad slow in reaction, but everything is clear and easy to find. Voice recognition is fast and accurate. However, there are no onboard apps or wireless software updates through the vehicle's modem (you need an external WiFi network for that).

But there's still onboard 4G WiFi, wireless device charging, a smartwatch app, and the ability to make your smartphone the vehicle's ignition key. Lincoln's remote app functions are included for five years, with SiriusXM traffic data for six years. The rear entertainment includes Roku media streaming and other USB, HDMI, and wireless connections. Switching drive modes will play beautiful animations on the instrument panel. And actually, compared to the overkill found on a Mercedes dash, it's a relief the Lincoln is so simple. 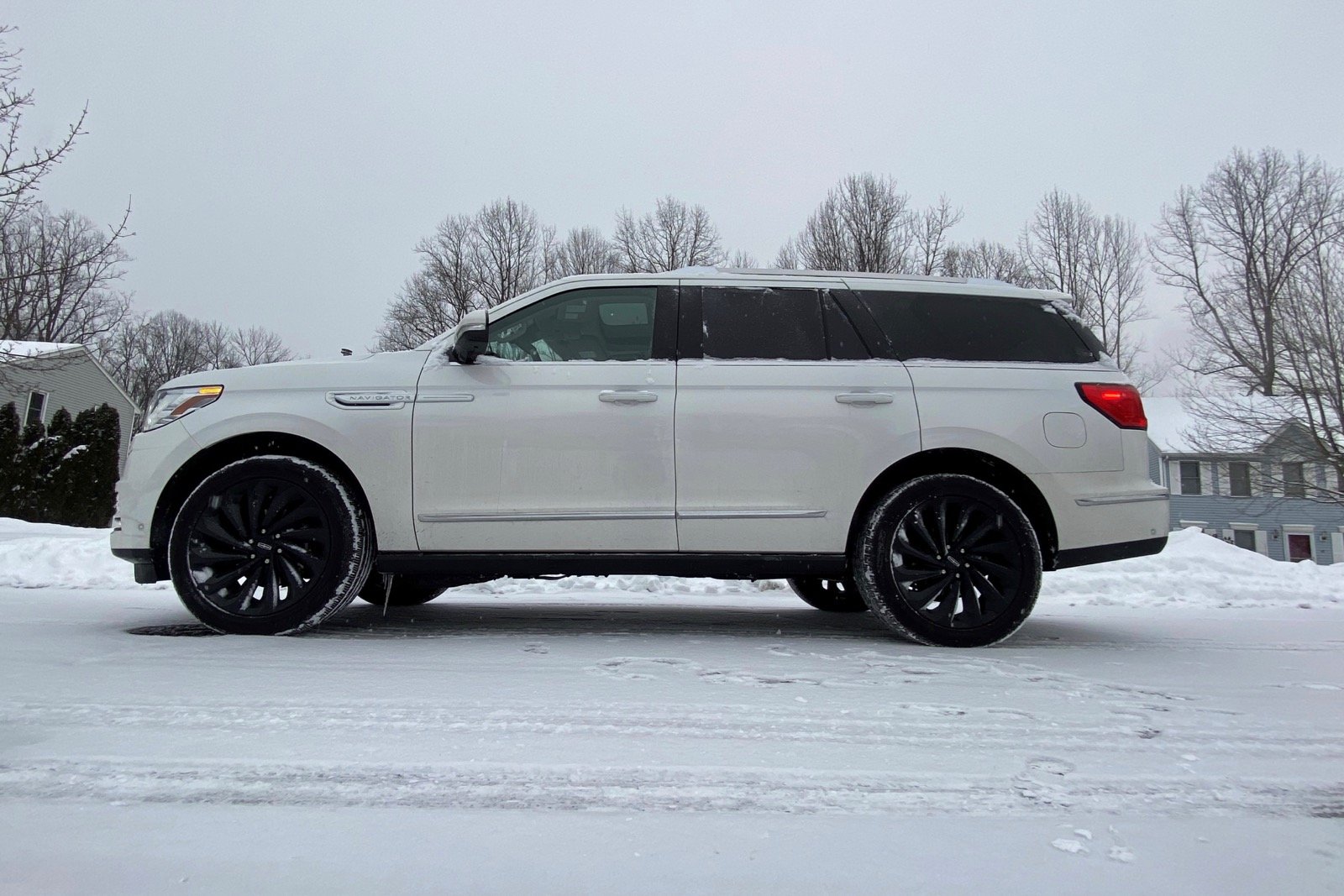 The 2021 Navigator was crash-tested by the National Highway Traffic Safety Administration and received five stars overall and five stars in every test except for rollover resistance (four stars for 4WD models, three stars for RWD models). The Insurance Institute for Highway Safety has not rated the Navigator in its current generation. Knee airbags are not offered. Inflatable rear seat belts for the second row are optional, which is a rare safety feature intended to reduce chest injuries. 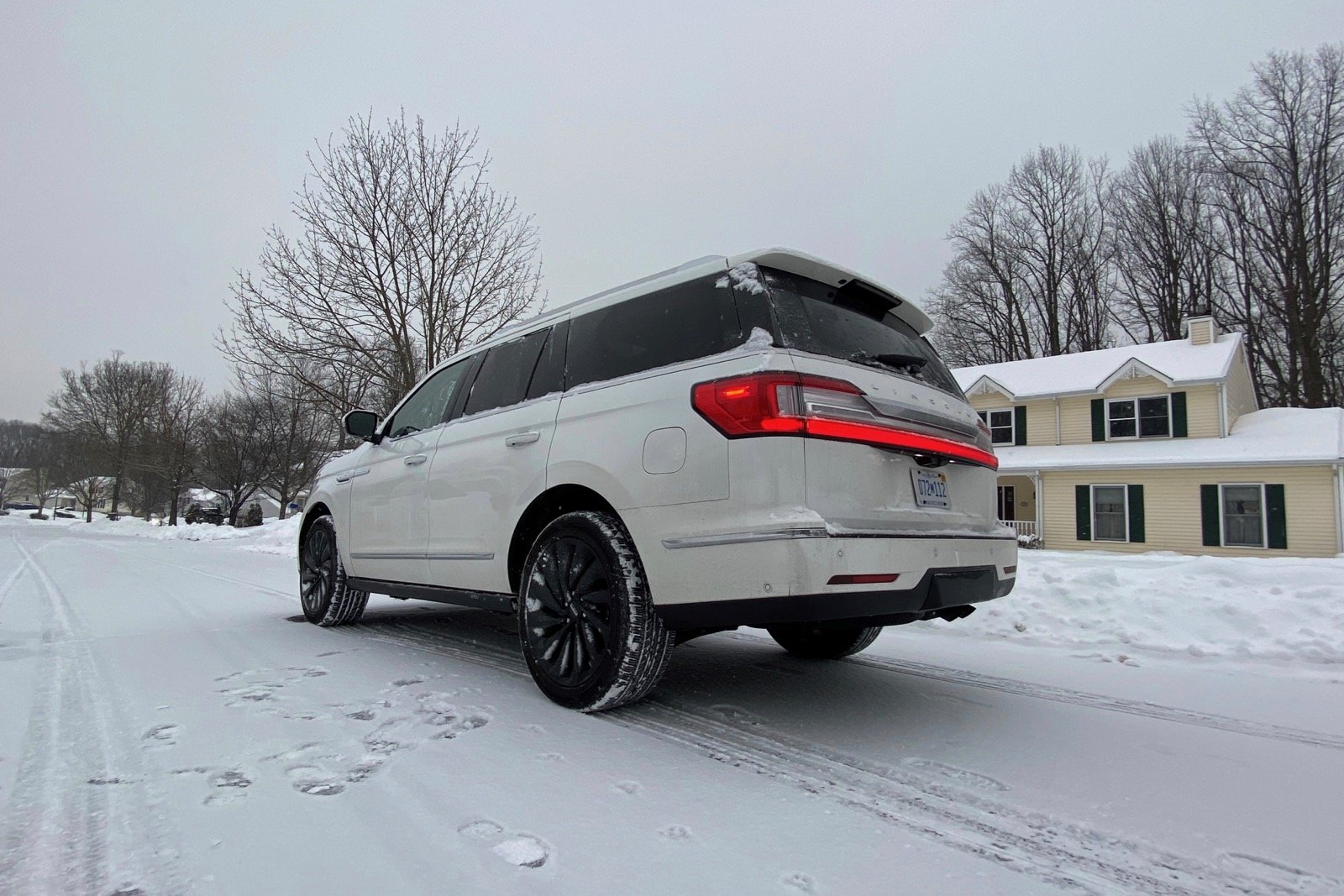 The 2021 Navigator starts at $76,185 for the Standard, $81,965 for the Reserve, and $98,125 for the Black Label. Add a few thousand more for the extended L versions of the Reserve and Black Label. Our Reserve with the Monochromatic Package and Luxury Package was $92,340 with destination. It's a value against the much smaller Mercedes-Benz GLS450 and BMW X7 M50i, though for the best tech features, it won't be against the new Escalade. Depreciation on all these luxury giants is high. Lincoln offers valet dropoff and pick-up at your home for four years of service, while Black Label trims include the price of those service visits plus unlimited car washes and other benefits. It's an impressive truck—and most important, it feels unique as a Lincoln.

What's your take on the 2021 Lincoln Navigator?

Users ranked 2021 Lincoln Navigator against other cars which they drove/owned. Each ranking was based on 9 categories. Here is the summary of top rankings.

Have you driven a 2021 Lincoln Navigator?
Rank This Car

Enter your zip to see incentives for a new Navigator in your area.