Looking for a New Lexus RX in your area?

One of America’s favorite luxury SUVs continues to make a strong case for itself. 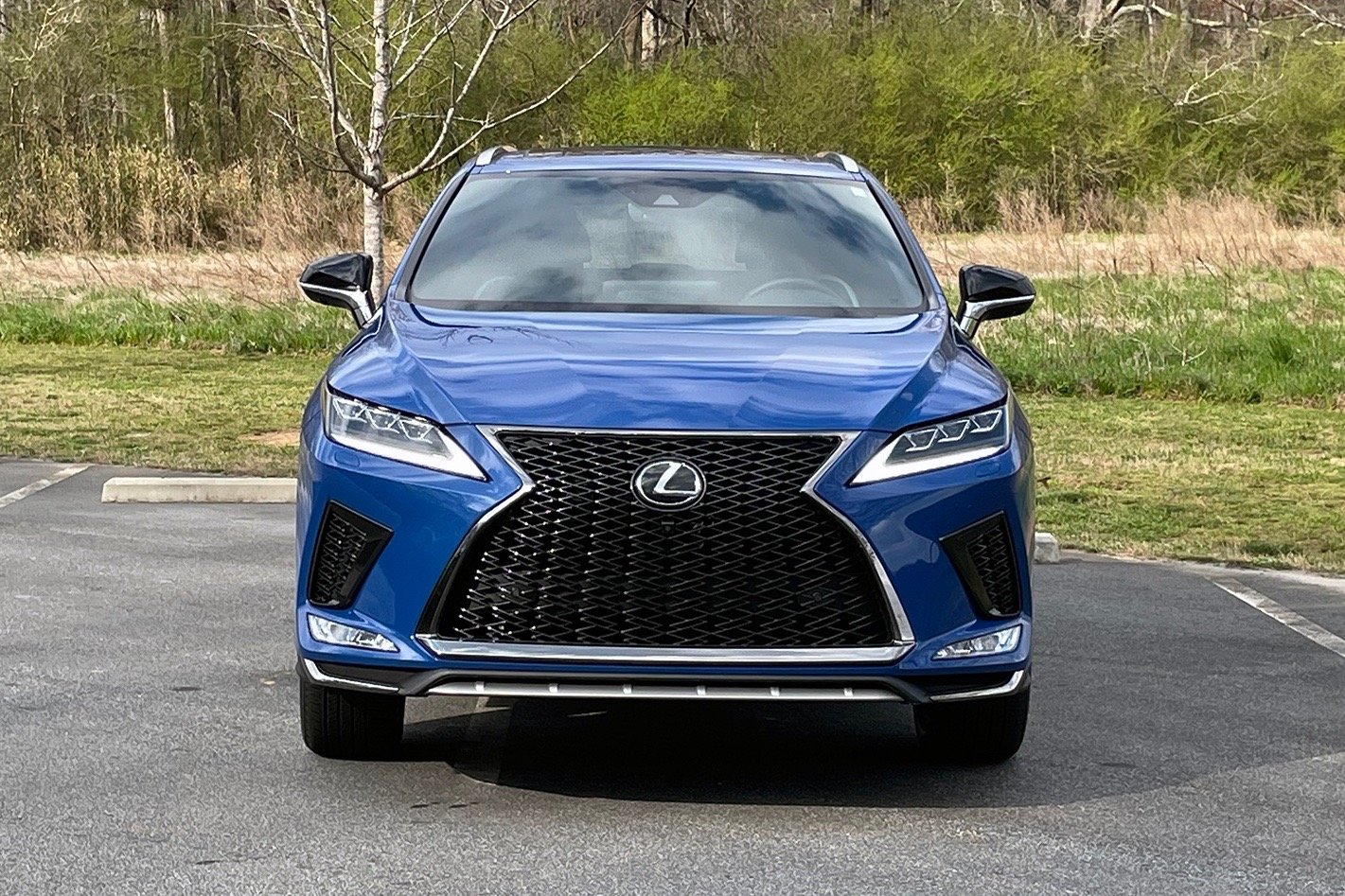 The body and mechanics of the midsize Lexus RX are mostly unchanged for the 2021 model year. It remains a formidable luxury SUV with comfortable accommodations and plenty of creature comforts. Lexus’ tradition of reliability extends to the RX as well. There are a few tech upgrades worth noting for 2021, including new standard safety systems. 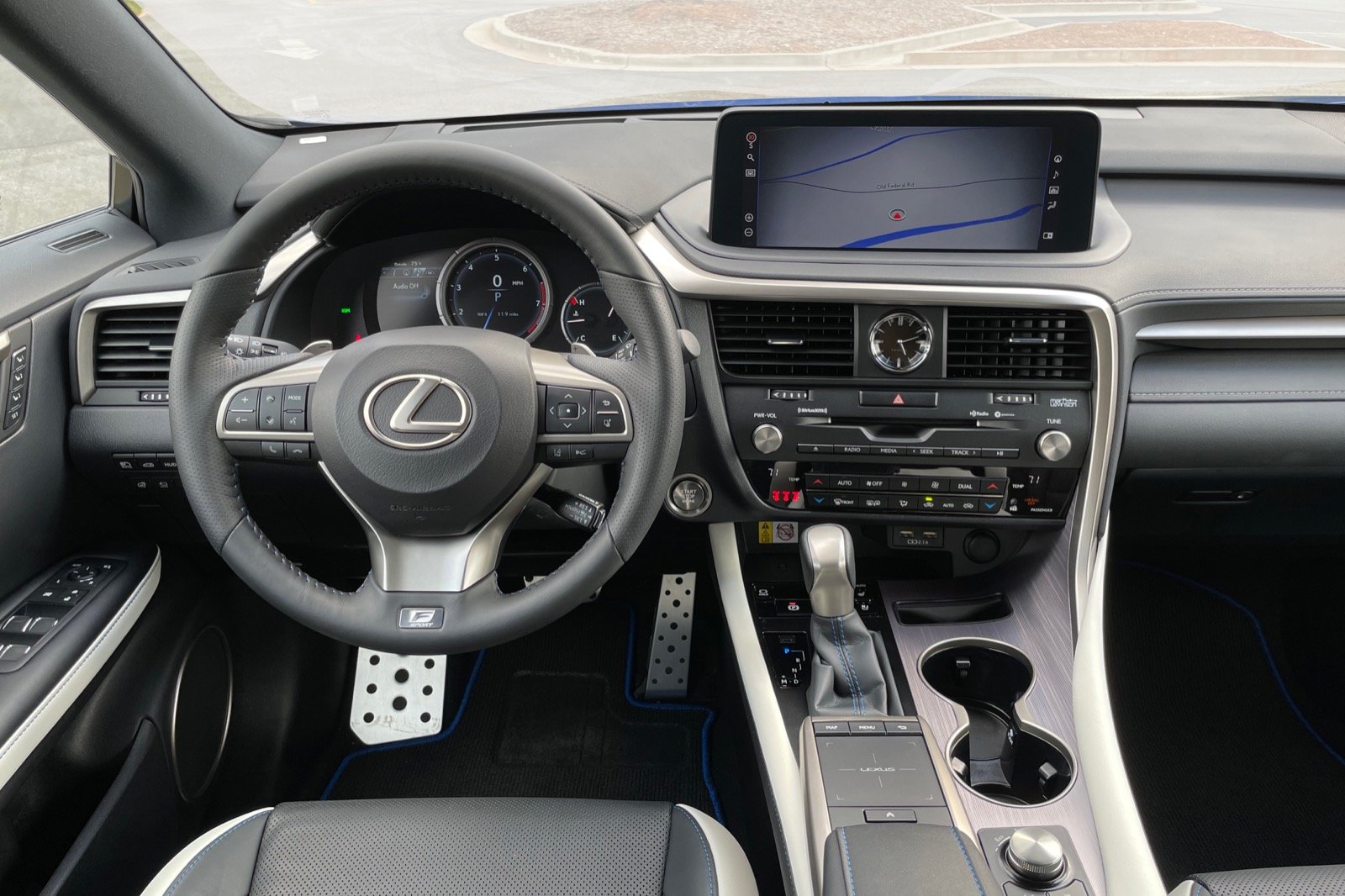 If you’re looking to describe the modern design aesthetic of Lexus, look no further than the styling of the 2021 RX. It’s all there, from the large grille to angular headlamps, shapely body, and floating roof, to the sumptuous seating, perforated leather upholstery, and bland center console.

Lexus sells the RX in five variants: the RX, RX F Sport, RXL, RX Hybrid, and RXL Hybrid. The RX and RX Hybrid are the base models within their respective powertrain sets. The RX F Sport is the most performance-focused version of the car while the RXL and RXL Hybrid have extended bodies and a third row of seating.

Changes made to the body of the RX for the 2020 model year remain for 2021. For 2020, the car received more elongated headlights and a nose job designed to make the SUV’s front end look less like a fish with its mouth open, a look that was heavily criticized for when the current generation debuted.

The biggest sore point in the entire SUV is the design of the center console. Much can be said about Lexus’ infotainment system setup, but there’s also the issue of it being perfectly functional though dated in its appearance. While other automakers have switched to piano black plastic surrounds with chrome accents or a multi-screen setup that foregoes traditional radio and climate control buttons, Lexus has stayed with a dated charcoal plastic look and traditionally illuminated buttons. 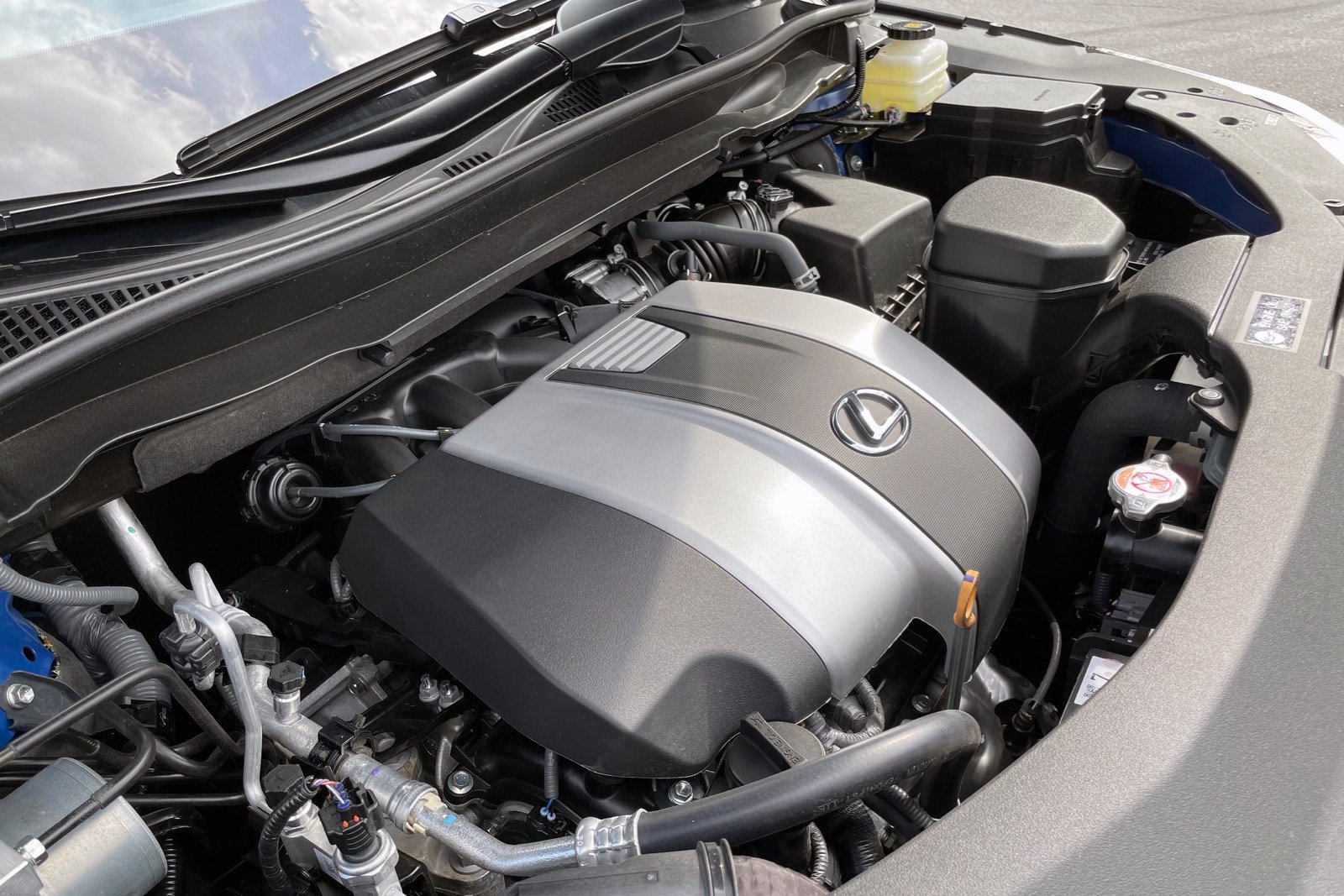 The Lexus RX, RXL, and RX F-Sport are powered by a 3.5-liter V6 engine that delivers 295 horsepower and 267 pound-feet of torque. The robust engine is paired with an eight-speed automatic transmission that does a relatively smooth job of getting through the gears but sometimes can get stuck trying to figure out the right gear under acceleration. Lexus recommends 91 octane fuel to power the engine.

The EPA rates the front-wheel-drive (FWD) RX 350 as the most fuel-efficient Lexus RX, earning 20 mpg in the city, 27 mpg on the highway, and 23 mpg combined. Adding all-wheel drive (AWD) or opting for the RXL shaves 1 mpg off the car’s combined fuel economy numbers. The RXL with AWD gets just 21 mpg combined.

Lexus RX Hybrid and RXL Hybrid models are power by a 3.5-liter V6 and three electric motors. That results in the availability of 308 hp, which is managed by what Lexus calls an electronic continuously variable transmission (e-CVT). Those SUVs come standard with AWD. They manage either 29 or 31 mpg in the city and 28 mpg on the highway, depending on which model is chosen.

Tuning adjustments made to the car’s suspension and handling systems for the 2020 model year make the SUV more dynamic than before. With AWD it feels planted in the corners though at higher speeds there is some body roll. Steering is targeted but not sporty making the RX effortlessly maneuverable at low speeds and able to be easily guided when traveling at a higher rate.

The RX is a comfortable cruiser and it wears that title well. For buyers looking for a little more pep, the RX F-Sport model turns things up a notch. It’s no Audi SQ5 or RS Q8, but it does deliver a bit more for the driver looking for more spirit during their commute. 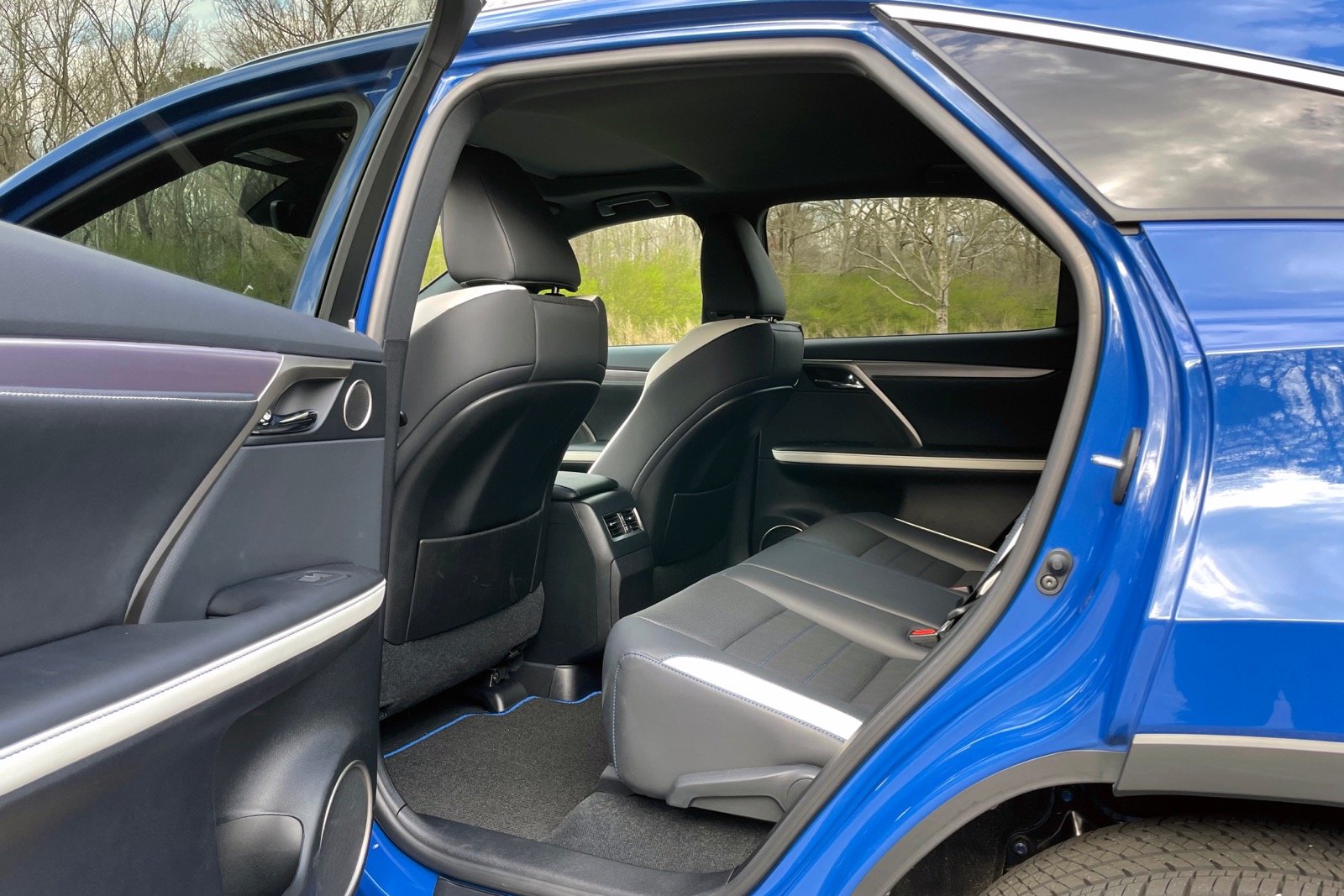 Whatever you can say about the design of the Lexus RX from an aesthetics standpoint, there’s no doubting that it’s one incredibly functional SUV.

The two-row RX 350, RX F-Sport, and RX 450h seat five. The three-row RXL and RXL Hybrid seat six or seven, depending on the configuration. Front-seat occupants will find themselves with plenty of space. Second-row seating is fit for adults as well. When it comes to the third row, seating is tight for anyone, of any age. The sport seats defy expectations and deliver a comfortable ride, even after hours in the car.

The RX, like other sloped-roof crossovers, doesn’t have nearly the cargo room you’ll find in more traditional-style SUVs. Behind the second-row seats is 18.4 cubic feet of space and with those seats folded, there are 56.3 cubic feet of space in the RX.

Similarly sized vehicles, like the Nissan Murano and Honda CR-V offer far more cargo space. A power liftgate is standard on the RX and a hands-free liftgate is available. 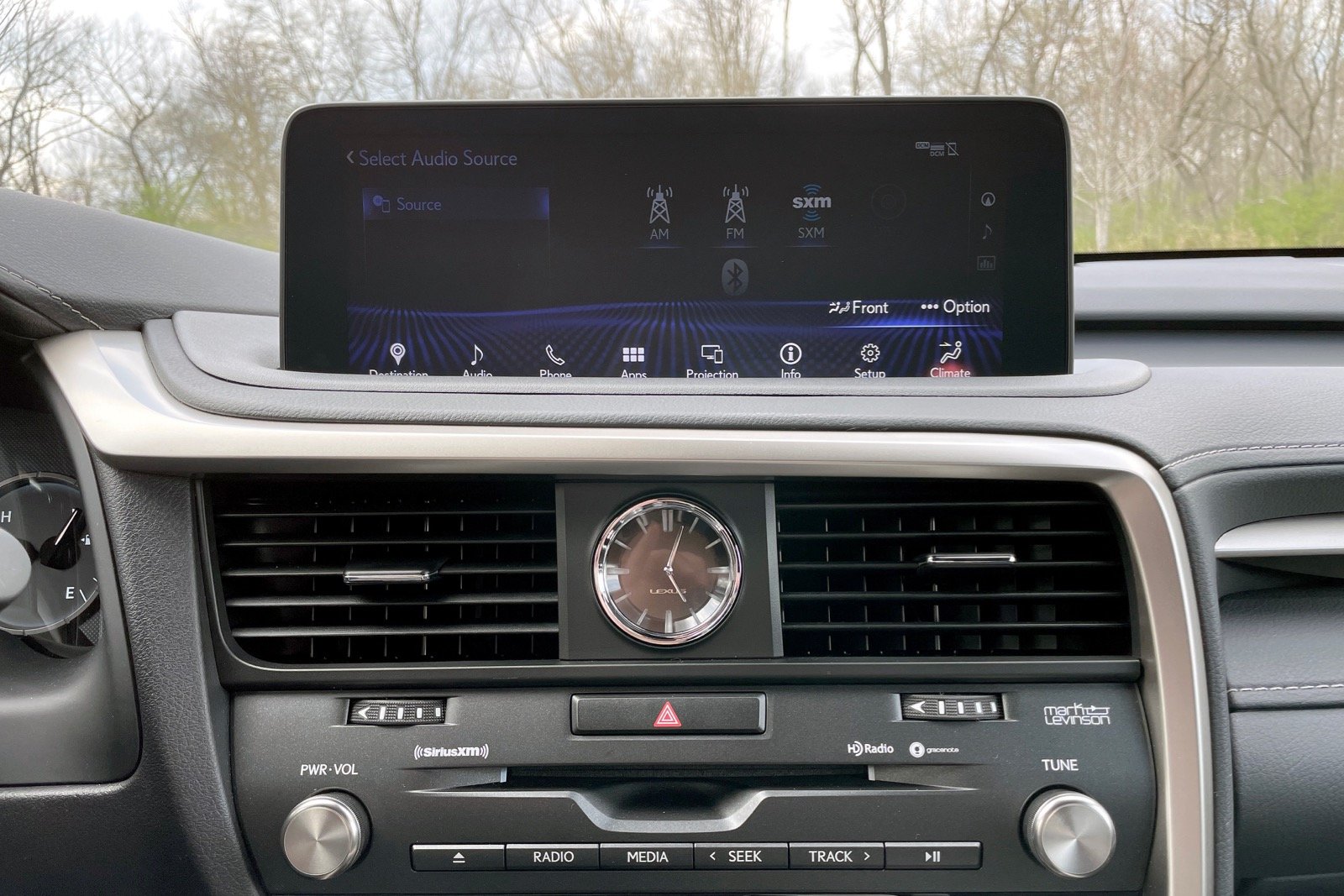 The touch aspect of the infotainment touchscreen works as advertised. Though the Lexus infotainment operating system isn’t the easiest to use, nor always quick glance-friendly, the colors and screen clarity are pleasing.

Like most Lexus models, the luxury crossover, when equipped with the larger screen, comes with a Remote Touch controller. The touchpad is designed to make it so drivers do not have to touch their touchscreen, but instead use their finger like a mouse on the pad to select what menus they want. The controller has gotten easier to use over the years but it’s still not as refined as the Acura touchpad system and it takes up valuable center console space.

Steering-wheel controls are easy to use and feature all the necessary functionalities a driver would want or need.

Unlike some of its competition, the Lexus RX does not have wireless Apple CarPlay or Android Auto. It’s also not the newest kid on the block. If those are necessities for you, you may want to shop elsewhere or wait a few years for the new RX. 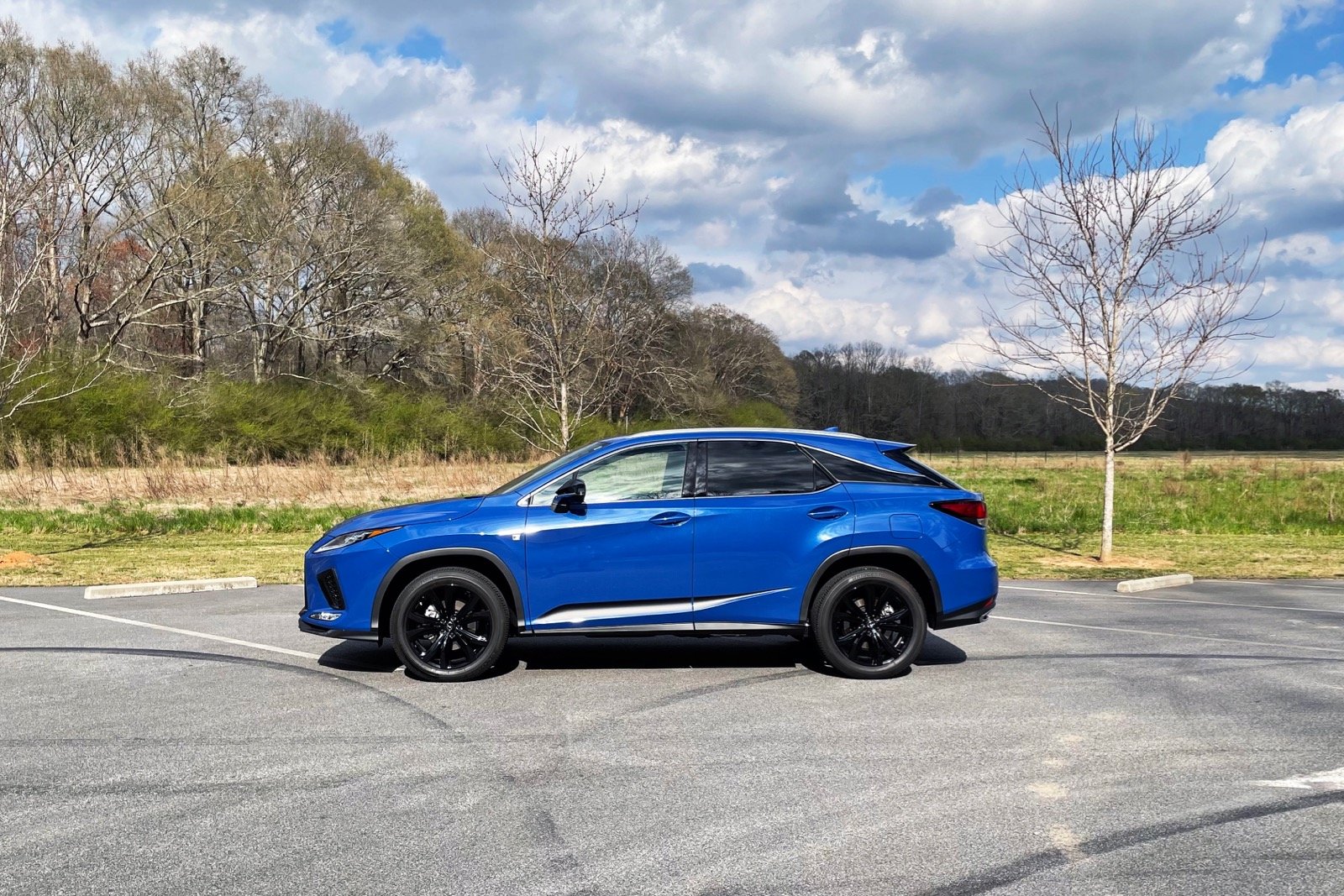 The Insurance Institute for Highway Safety (IIHS) has given the 2021 Lexus RX its Top Safety Pick designation. It scored all Good marks on crashworthiness tests.

It is worth noting that the RXL and RXL Hybrid have a longer body than the standard Lexus RX, which may impact the vehicle’s crashworthiness. Neither the hybrid model nor the RXL SUVs have been tested by IIHS.

The National Highway Traffic Safety Administration (NHTSA) has rated the RX 350, RX 350L, and RX 450h for crashworthiness, but has not tested the RX 450hL. The vehicles that were tested all received the same scores: four out of five stars overall with a perfect five out of five for side-impact crashworthiness.

While the suite of safety features is good, it’s not the hands-off piloting-like software that some automakers like Genesis, Cadillac, and Tesla have in their vehicles. It’s the type of shortcoming that comes with having a model that is nearing the end of its generational cycle in an age when technology is evolving at a rapid pace. If you’re upgrading to the RX from a vehicle that’s over three years old, you’re not likely to notice that it’s missing the cutting-edge tech that you’ll find in other new luxury vehicles.

There are two complete sets to LATCH connectors in the rear outboard seats in the second row where child safety seats can be installed. 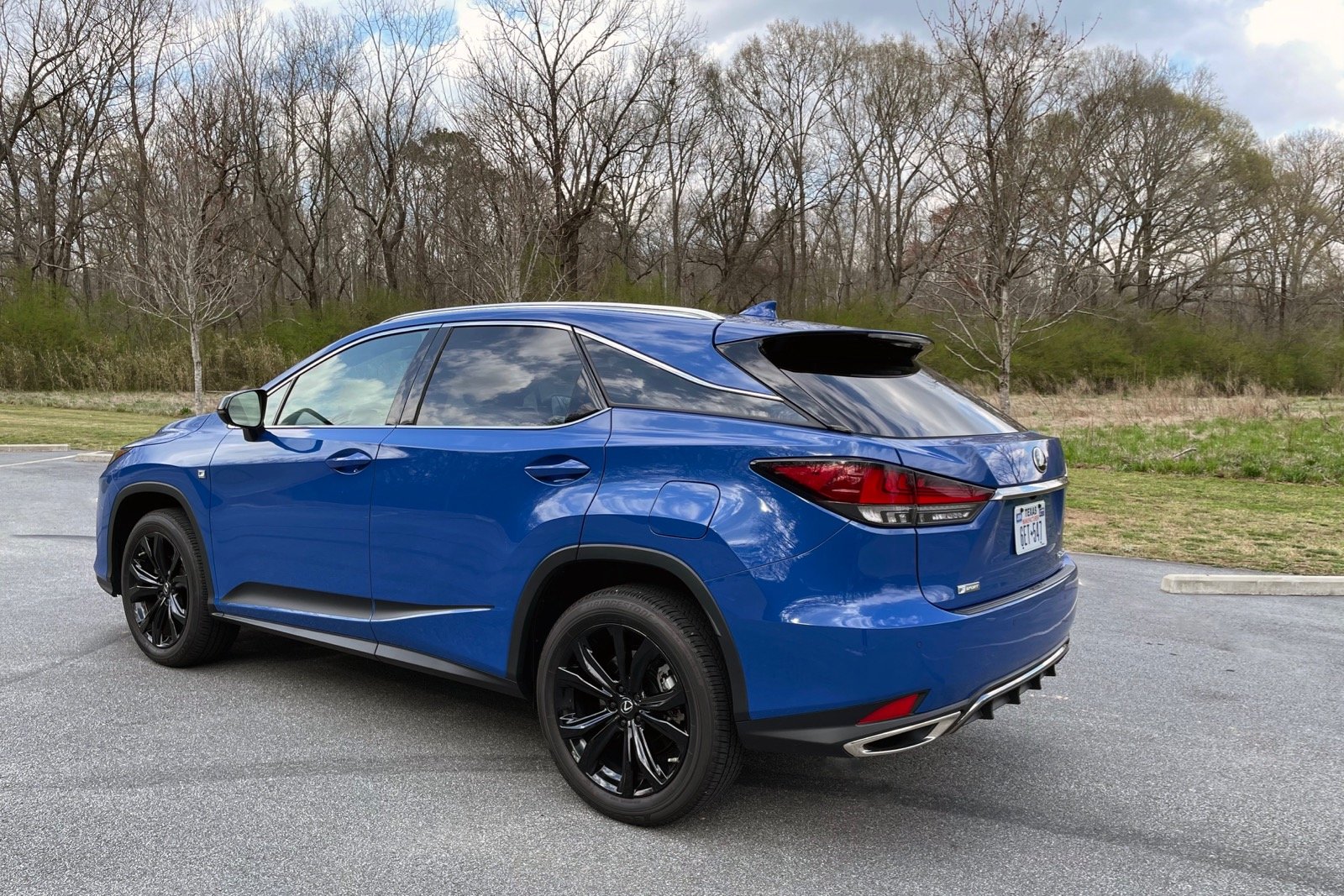 Among Lexus’ chief competitors is the Genesis GV80. They start around the same price, but the Genesis brings a nicer interior and more driver-assist features to the table.

The Audi Q5 is priced to start lower than the Lexus RX but that’s with a less powerful engine. Opting for a V6 plus the sporty handling packages adds up quickly pushing the car's MSRP closer to $60,000. The Q5 doesn’t have an available third-row variant.

Mercedes-Benz has made its GLE even more expensive than the Lexus RX with a starting price of $54,750. The smaller GLC doesn’t have an available third row of seats and isn’t as nicely appointed or as powerful but pricing starts at just $43,200.

The Infiniti QX50 and QX55 fit right in with the Lexus RX. The QX55 is the coupe-like version of the QX50, and new for the 2022 model year. Both have nice appointments and solid powertrains but the Lexus delivers a more engaging drive and a nicer infotainment system. Neither comes with an available third row of seats.

BMW's X5 is plenty spacious, but more of a traditional SUV. It has a plug-in electric variant that may pique buyers' interest but its price tag is heftier than the RX's.

Three-row SUV seekers who don’t want to veer into Toyota Highlander-sized territory may want to check out the new Jeep Grand Cherokee L. The 2022 model arrives in mid-2021 and is designed to be as nicely appointed as most any luxury SUV in its highest grades.

Enter your zip to see incentives for a new RX in your area.