Looking for a New Lexus NX Hybrid in your area?

The NX Hybrid has no major faults, but it falls short of expectations for a luxury vehicle. 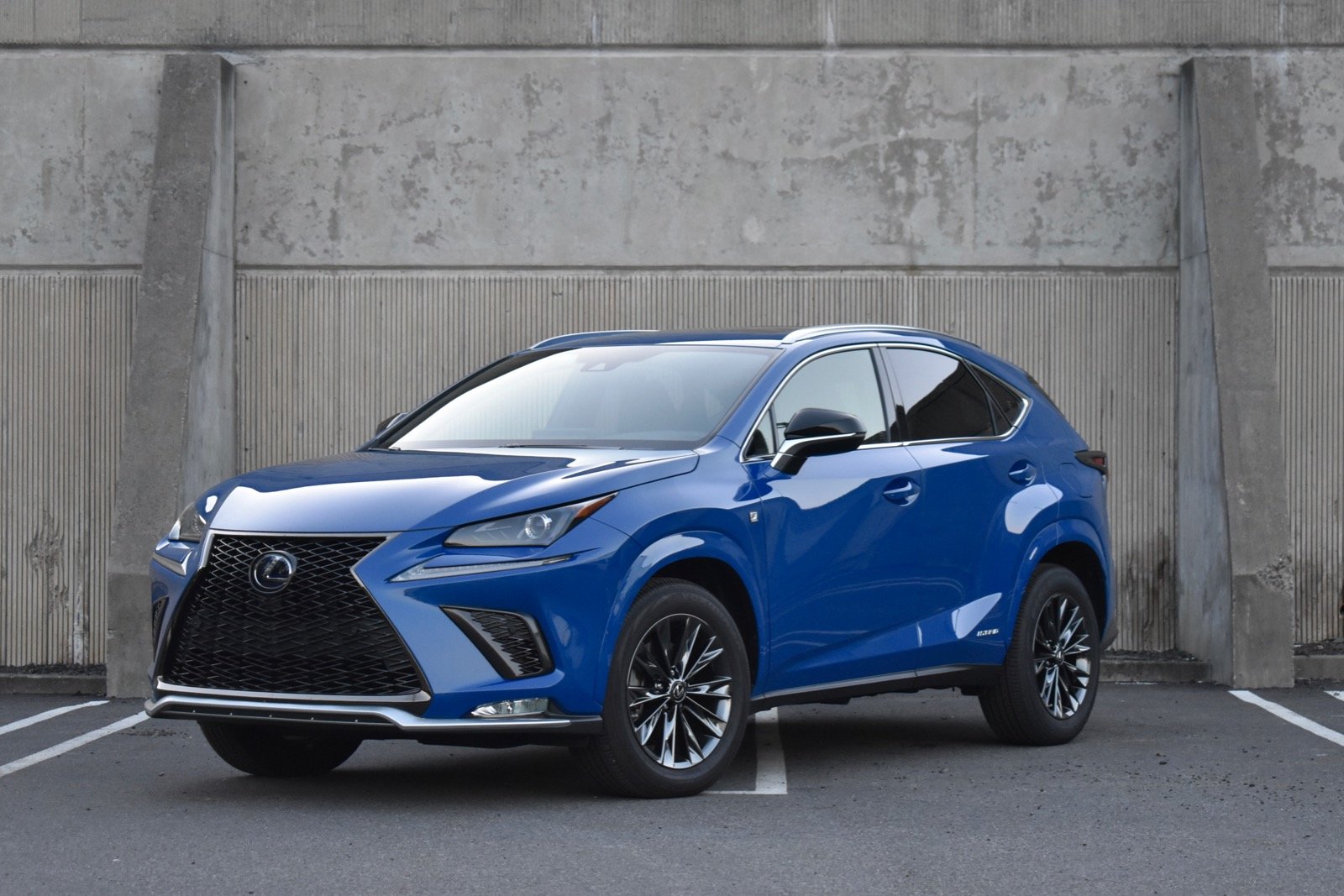 The 2021 Lexus NX compact SUV is showing its age. It’s not an inherently bad vehicle, but with a design that dates back to the 2015 model year, it’s struggling to keep pace with fresher competition—including the Acura RDX, Audi Q5, BMW X3, Infiniti QX50, Lincoln Corsair, Mercedes-Benz GLC, and Volvo XC60—and can’t justify its positioning as a premium product.

Lexus offers the gasoline-only NX 300 and the NX 300h hybrid, but we’ll focus on the latter for this review. The big news for the 2021 Lexus NX 300h is a new F Sport Black Line special edition, which adds sportier F Sport styling features that normally aren’t available on the hybrid. It also comes with a matching two-piece set of Zero Halliburton luggage. Other changes include additional standard driver aids and "low-profile" windshield wipers.

We tested the Black Line for this review, but with production limited to 1,000 units, it will likely be sold out by the time you read this. However, it’s mechanically similar to the regular-production NX 300h hybrid trim levels—base and Luxury. 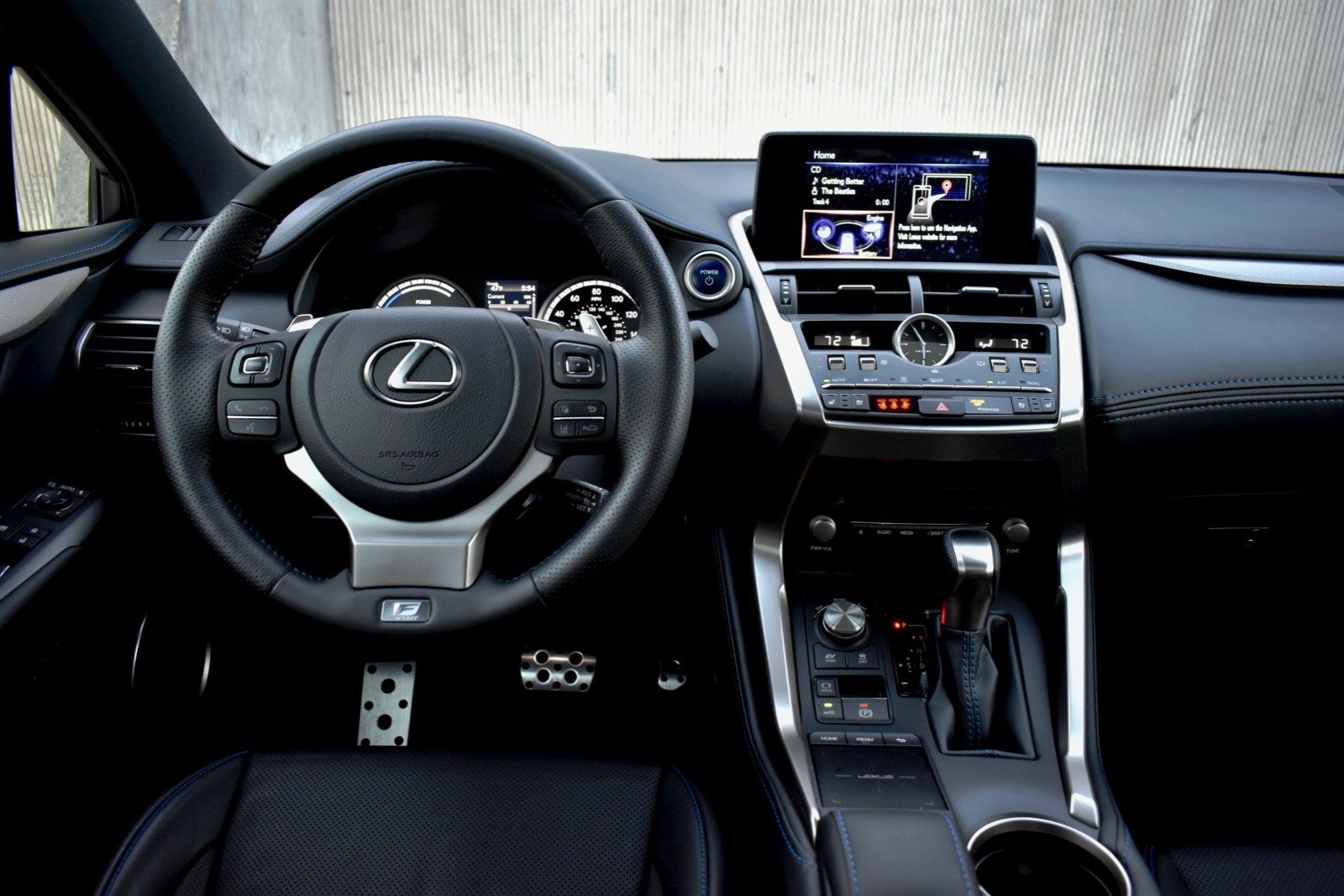 The NX slots between the Lexus UX and Lexus RX crossovers in size, with the same familial styling. With its sharp edges, streamlined profile, and scowling face, the NX doesn’t look like a traditional SUV, but the styling also hasn’t changed much over the years. So it’s both different and familiar.

Like an ancient Redwood, you can see just how old the current NX is by cutting it open. Under the skin, the NX uses the same basic platform as the previous-generation Toyota RAV4. Lexus is the luxury division of Toyota, so platform sharing between the brands is common. But despite being the pricier luxury model, the NX is now a step behind the RAV4 in engineering.

Our F Sport Black Line test car had the larger mesh grille and fake side intakes from the gasoline NX 300 F Sport model, plus dark-finish 18-inch wheels (17-inch wheels are standard on base models) and new-for-2021 Grecian Water (blue) paint. While styling is subjective, we appreciated Lexus’ choice of a bright blue color, which contrasts the more subdued color palettes of most other automakers. That color also nicely contrasted the dark wheels and other trim elements.

Like the exterior, the interior design seemed radical when the NX debuted, but it’s become familiar due to the lack of changes and use of similar designs on other Lexus models. A stepped center console extends out toward the driver, and you won’t find any of the wood trim of a more traditional luxury car.

Our test car also had an F Sport heated steering wheel, aluminum pedals, and NuLuxe upholstery with blue contrast stitching (NX 300h Luxury models get real leather upholstery), but that was all part of the optional Black Line treatment. Look closely, and you’ll see that most of the switchgear and trim is plastic, where some items might be metal on higher-end Lexus models. While we liked some aspects of the design—including the analog dashboard clock—material quality seemed more on the level of a mainstream brand, not a luxury brand like Lexus. 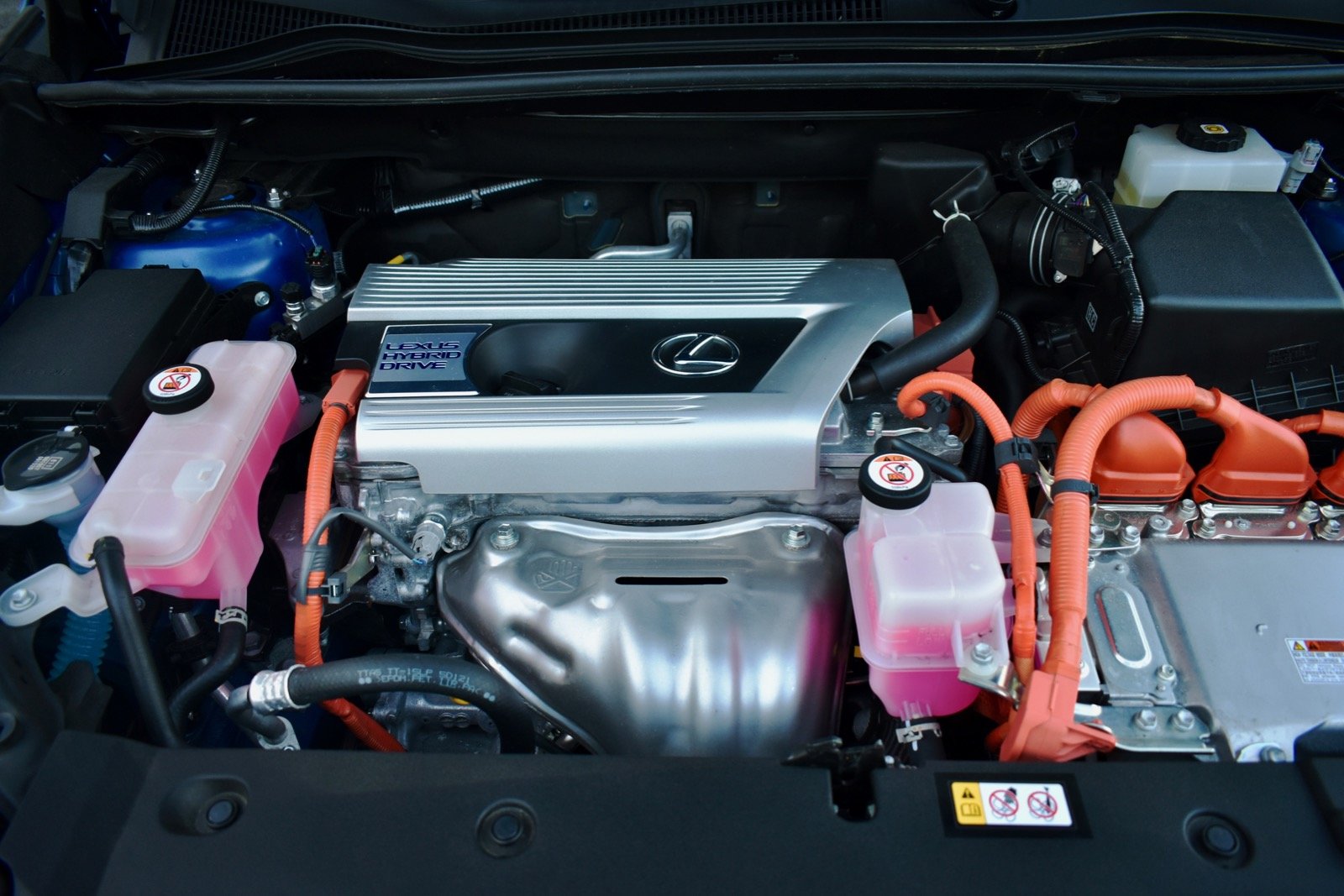 The NX hybrid powertrain consists of a 2.5-liter four-cylinder engine running on the more efficient Atkinson cycle, assisted by an electric motor. The total system output is 194 horsepower, and the NX 300h hybrid gets standard all-wheel drive (AWD).

While our test car’s aggressive F Sport styling elements gave the NX hybrid a sporty look, the numbers tell a different story. Lexus quotes zero to 60 mph in 9.1 seconds, with an electronically-limited top speed of 112 mph, emphasizing that this is not a performance vehicle. If you want quicker acceleration, the gasoline Lexus NX 300 packs a 235-hp turbo four-cylinder engine, but it comes standard with front-wheel drive (FWD), so you'll have to pay extra for AWD traction.

“Performance hybrid” is no longer an oxymoron, but the NX 300h seemed more focused on fuel efficiency than excitement. The drivetrain struggled to keep up with a heavy right foot, getting flustered and delivering a clunky handoff between electric and gasoline power. That made exploiting gaps in traffic difficult.

As part of the Black Line package, our test car had sport-tuned suspension, which made a big difference in handling. The NX 300h felt remarkably agile and took a set in corners with ease. This suspension tuning also maintained a comfortable ride, a major plus considering that “sport” tuning often means spine-shattering levels of firmness.

However, other issues let the NX 300h driving experience down. Most modern cars have numb steering, but the Lexus’ helm was worse than average. The NX also didn’t feel as tight as newer Toyota and Lexus models based on the Toyota New Global Architecture (TNGA) platform—including the latest RAV4, which is ostensibly a step below the NX in the automaker’s hierarchy.

Lexus also includes Normal, Eco, and Sport drive modes, but they didn’t seem to make much of a difference. Eco mode further blunted acceleration, with only a slight increase in observed fuel economy. Sport mode made the NX feel a tad livelier but didn’t address the lifeless steering. 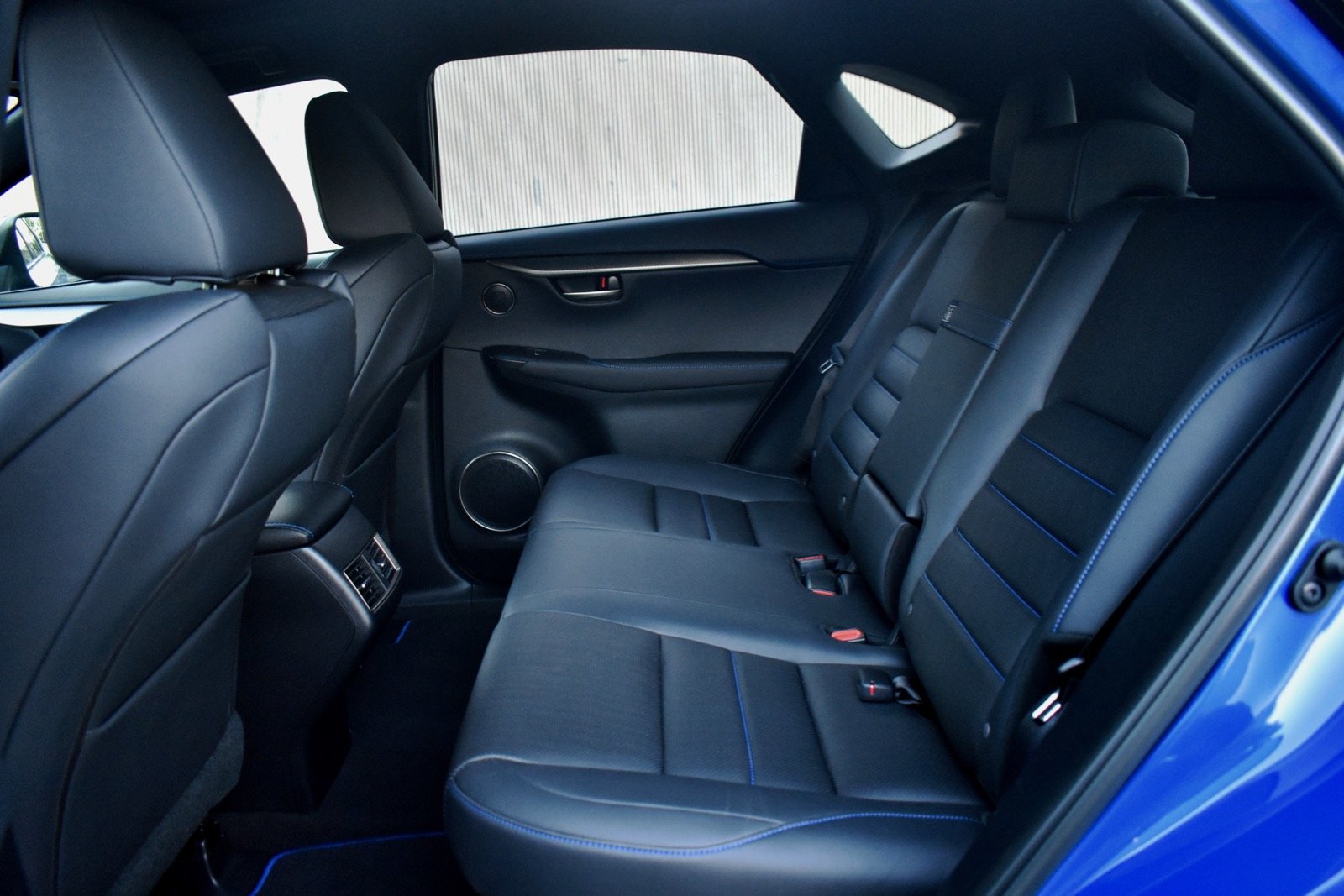 The Lexus NX has the least front headroom in its segment, and rear headroom is close to the bottom of the rankings as well. Front-seat legroom is fairly generous, but rear legroom is the worst among the NX’s competitive set. That, along with thick rear pillars, made for cramped-feeling rear seats.

Subjectively, the front seats felt more comfortable than the numbers might suggest, offering excellent support in all the right places. That’s thanks to the extra bolstering in the Black Line-specific seats, but even base models get standard 10-way power adjustment, and heated and ventilated front seats are available as well as part of the $2,630 Premium Package, which also includes a moonroof.

The sloping roofline and thick rear pillars made rear visibility less than optimal, although large, well-placed exterior mirrors helped compensate for this. Unlike most other luxury SUVs, Lexus aimed for a sportier feel, with a dashboard and door sides that rise up fairly high, not unlike a sports car. That proved very functional, as dashboard controls were easy to reach, but it might not suit buyers looking for a more traditional SUV feel. 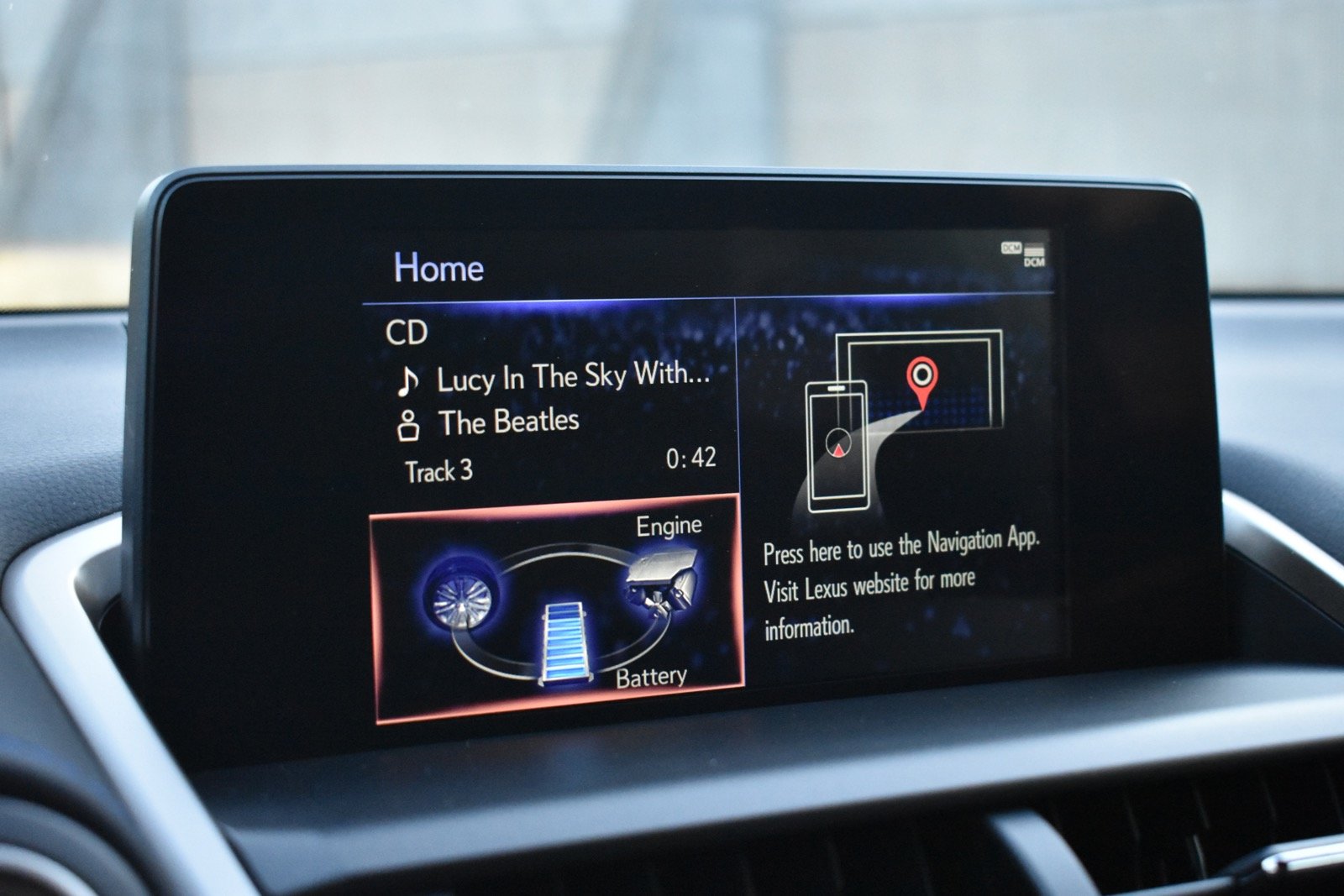 As with other Lexus models, the infotainment system is a major weak point. The standard setup includes an 8-inch display screen (a 10.3-inch display is optional) with Bluetooth, Apple CarPlay, Android Auto, and Amazon Alexa compatibility, as well as a built-in WiFi hotspot. However, you don’t get a touchscreen. Instead, Lexus continues to use the awkward Remote Touch Interface touchpad, similar to what you get on a laptop. The lack of tactile feedback, combined with the trackpad’s placement low on the center console, makes for a setup that’s very difficult to use while driving.

Thankfully, Lexus provided analog controls for most functions, including climate control and audio volume. Drivers can also rely on Apple CarPlay and Android Auto without using the native infotainment system, which is probably the best way to go.

Because whether you use the Remote Touch Interface touchpad or conventional buttons and knobs, the infotainment system itself feels dated. In our test car, the graphics looked straight out of the 1990s, and most menus were text-heavy and difficult to read while driving.

An eight-speaker audio system is standard, while higher trim levels get a 14-speaker Mark Levinson system. Our test car had the base system, which sounded tinny and unbalanced, proving that upgrading to a luxury brand doesn’t automatically bring upgraded equipment. 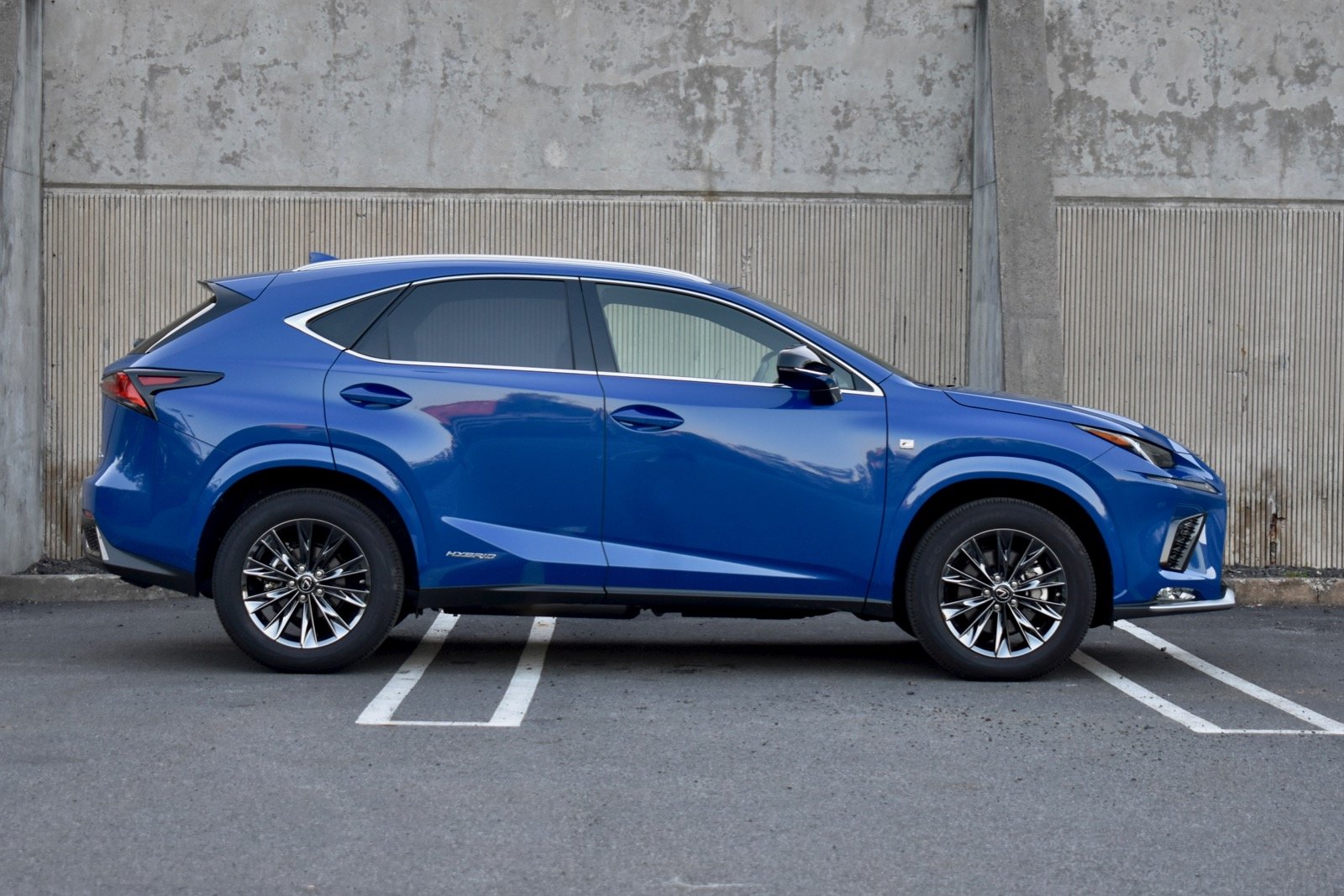 The 2021 Lexus NX received a “Top Safety Pick+” award from the Insurance Institute for Highway Safety (IIHS). That’s the organization’s highest safety award, and it applies to both gasoline and hybrid NX models. The NX received top “Good” scores in all IIHS crash tests, a “Good” headlight rating, and the top “Superior” rating for front-crash prevention tech. The only blemish was a lower “Acceptable” rating for LATCH child-seat anchor ease of use.

This is an impressive array of standard safety features for a luxury crossover, although it’s worth noting that similar features are also standard on most Toyota models. Still, it makes the NX 300h a good value compared to other luxury compact crossovers, which are fairly stingy on standard driver aids. The only thing missing, in our opinion, is a 360-degree camera system, which most competitors offer. 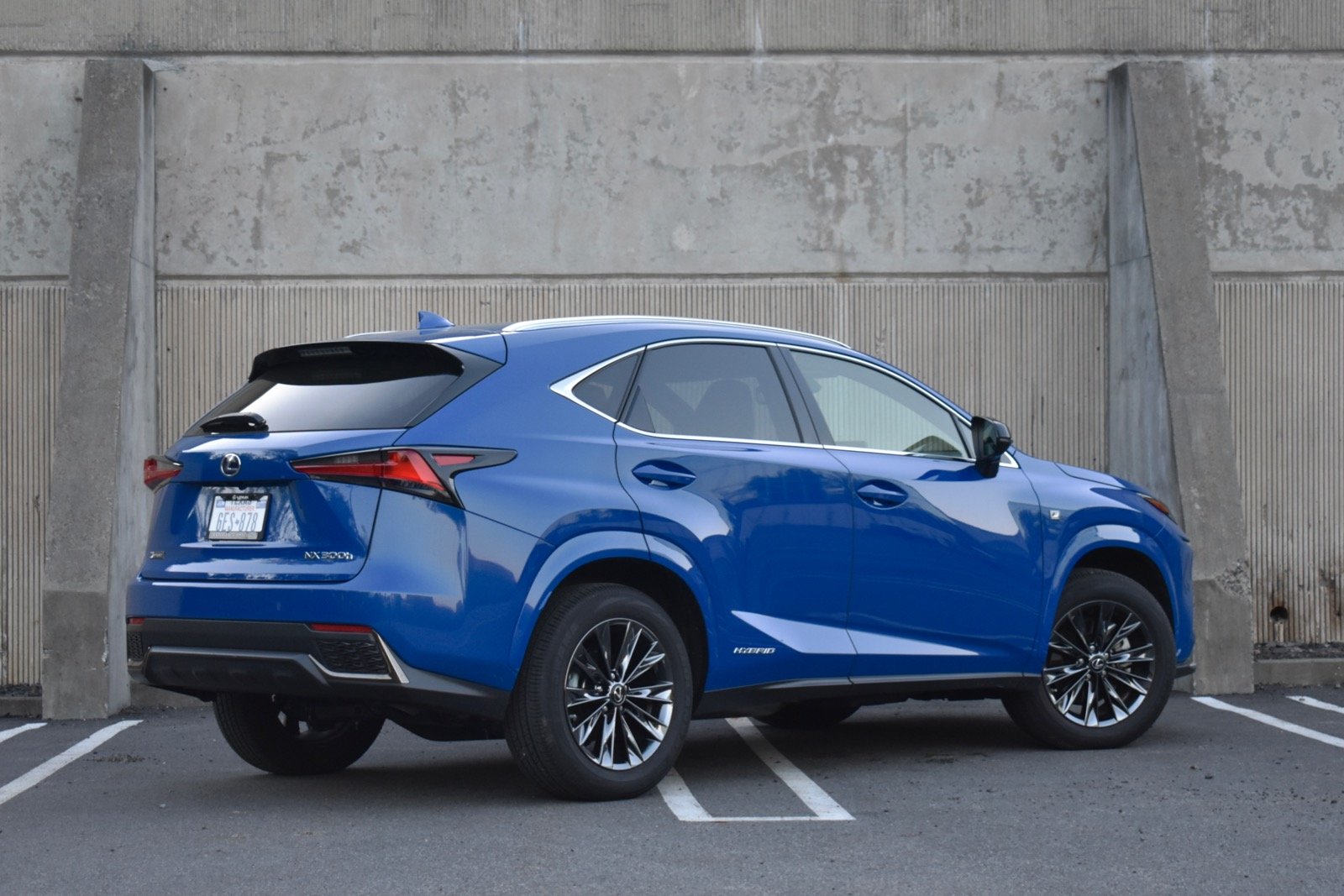 The 2021 Lexus NX 300h gets an EPA-rated 31 mpg combined (33 mpg city, 30 mpg highway). That’s appreciably better than the non-hybrid AWD NX 300, which is rated at 24 mpg combined, but not game-changing. We also couldn’t match the EPA numbers in the real world, where we averaged 28.9 mpg, according to the car’s trip computer. Based on the real-time fuel-economy readout, even medium acceleration had a big impact on efficiency.

Pricing for the 2021 Lexus NX 300h starts at $41,185, including a mandatory $1,025 destination charge. Our range-topping F Sport Black Line test car had a $47,835 MSRP. That buys a fairly well-equipped vehicle, but one that didn’t feel particularly luxurious. The NX 300h is a good value as far as luxury brands go, but competitors offer more in terms of performance and tech.

It’s also worth noting that the Audi Q5, BMW X3, Lincoln Corsair, and Volvo XC60 are available with plug-in hybrid powertrains, enabling a limited amount of electric-only running and greater overall efficiency than the NX’s hybrid powertrain, albeit with a higher purchase price.

The NX 300h also doesn’t stand out against its Toyota RAV4 cousin. The current Toyota RAV4 Hybrid may not have a posh badge, but it’s more powerful (219 hp) and more fuel-efficient (40 mpg combined) than the Lexus. The Toyota RAV4 Prime plug-in hybrid is sports-car quick (zero to 60 mph in 5.7 seconds) and boasts 42 miles of all-electric range—with a $38,100 base price. Lexus makes you pay more, but it’s unclear what you’re getting in return.

Anny I purchased my Lexus 300h and recommended it highly. The safety features are top notch and the stereo system is heavenly!

Have you driven a 2021 Lexus NX Hybrid?
Rank This Car

Enter your zip to see incentives for a new NX Hybrid in your area.