Looking for a New Lexus LC in your area?

The Lexus LC 500 encapsulates the spirit of a GT car with a stunning design and a perfect blend of performance and comfort. 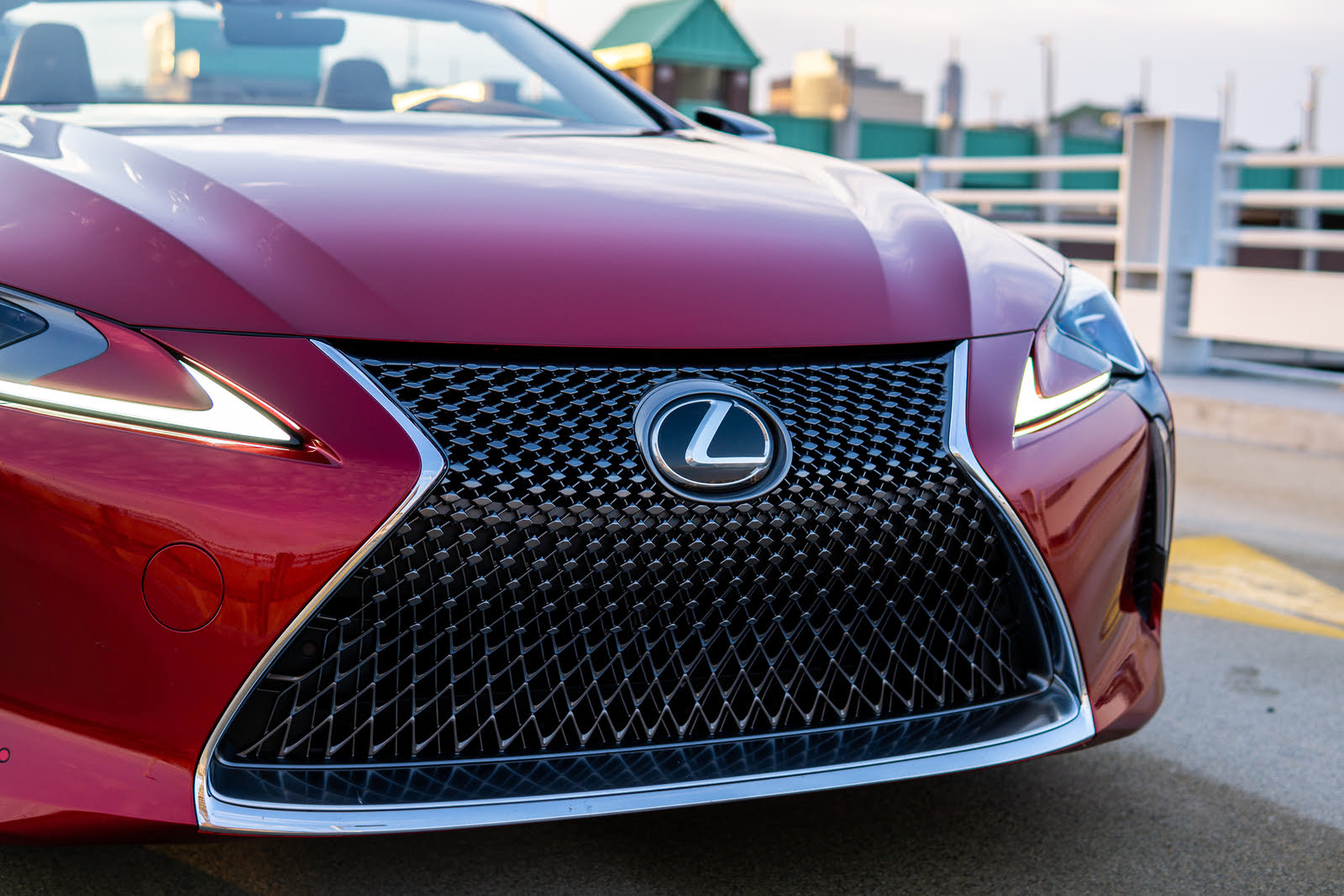 Through the years, Lexus has often offered a range-topping coupe. Its first offering was the SC 300, which then became the SC 400. This was replaced by the SC 430 in 2000. But Lexus has never offered a coupe quite like the LC 500. It is a true flagship coupe, designed as a grand tourer. This means it has plenty of power on tap, but the focus is not singularly performance. The 2021 Lexus LC 500 is about comfortable luxurious driving. And the introduction of the convertible variant for the 2021 model year emphasizes that focus. 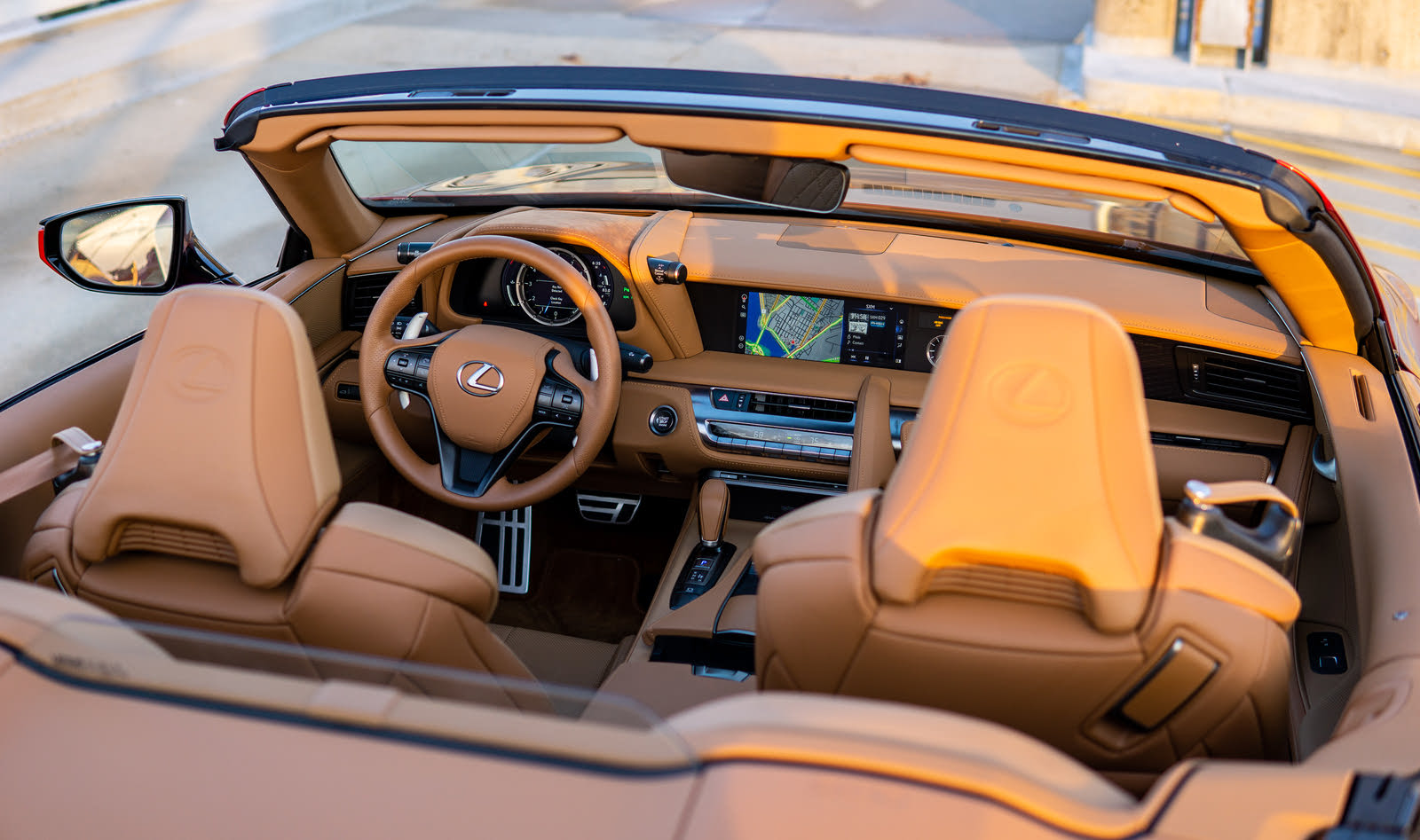 Perhaps the best compliment you can give the LC 500 is that it looks like it costs twice as much as it is. The dramatic lines and angles would fit right in with an assortment of supercars at a Concours event. The broad Lexus “hourglass” grille that looks garish on the brand’s compact cars is perfectly suited to the big coupe’s styling. And it is big, slotting above the compact RC coupe.

There are some neat design tricks with the LC’s styling. First off, the aforementioned grille is three-dimensional, it protrudes forward as it stretches the front end of the car. The headlights extend in three ways as well, from the grille to the lower front bumper to the front wheel arch. Then there’s the side of the car. It seems to pull inward until it reaches aft of the door, before abruptly widening towards the rear wheel. It eventuates the appearance of a wide car and makes it look like it’s in motion even when parked. The car has a completely different visual shape depending on which side of the car you’re standing. This is one of those cars you can’t help but turn around and stare at one more time before leaving the garage.

The cabin carries over that dramatic styling. Straight lines define the dash area. Elegant curves extend from the dash through the doors. Those curves are echoed by the passenger-side handle in the center console—a suggestion the front passenger better hold on tight.

The front seats have elegant contouring. They are bucket seats with bolstering, designed to keep the front occupants in place in hard cornering. But they never feel overly stiff, and would be a fine place to sit for a long trip.

A number of packages are available on the LC. The Touring Package adds an Alcantara headliner, heated steering wheel, embossed seats, parking assistant, and the Mark Levinson 13-speaker sound system. The Sport Package adds a carbon-fiber roof (on the coupe), Torsen limited-slip rear differential, and performance brakes. The Dynamic Handling Package adds the differential and brakes from the Sport Package, as well as active rear steering, a speed-activated rear spoiler, and other performance upgrades. 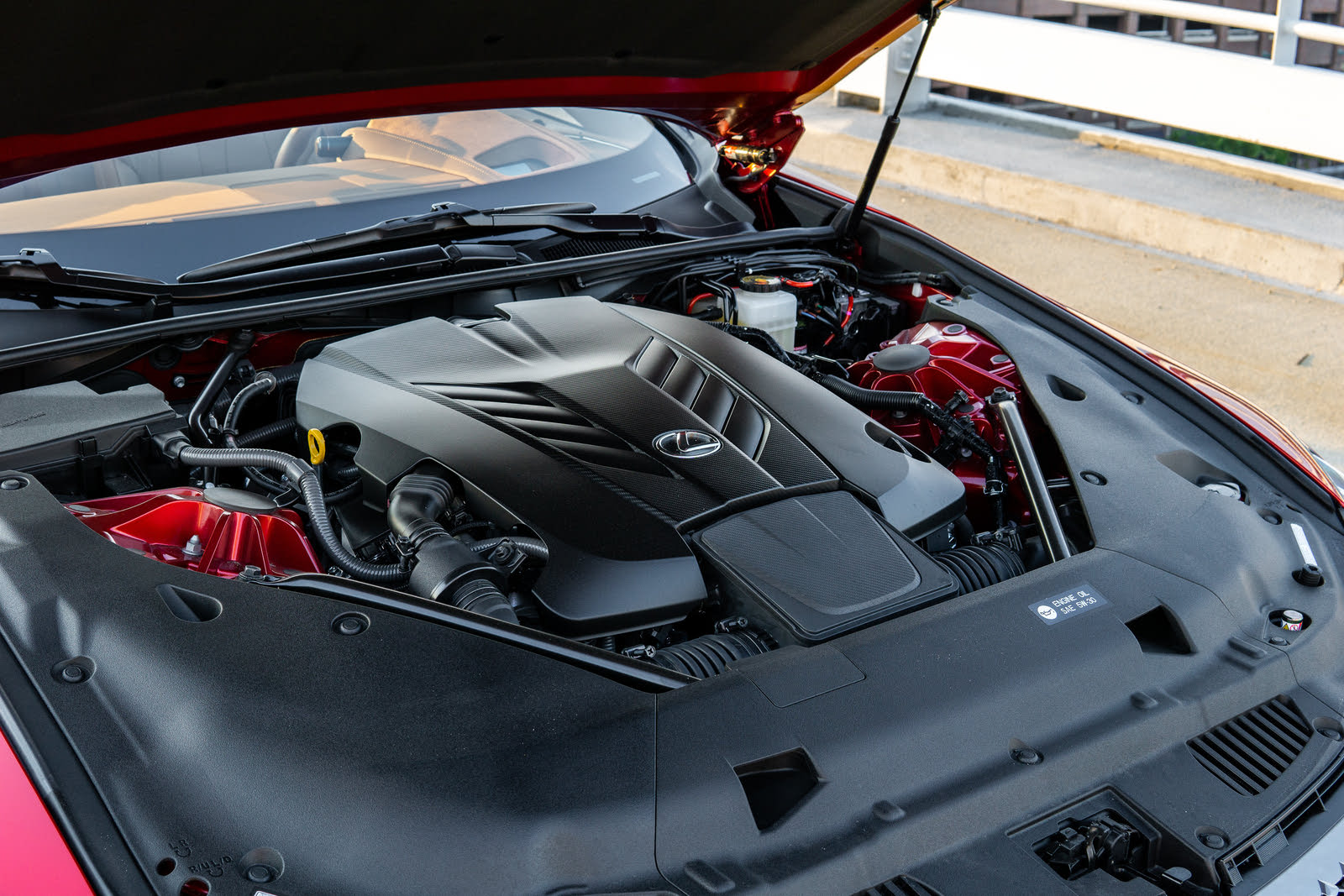 The LC 500 is powered by a naturally aspirated 5.0-liter V8. It makes 471 horsepower and 398 pound-feet of torque. Power is sent to the rear wheels through a 10-speed automatic transmission. This transmission can be left in automatic mode or manually operated via steering-wheel-mounted paddle shifters.

The LC has a drive mode selector with Normal, Eco, Sport, and Sport+ drive modes. It is cleverly positioned as a toggle protruding from the right-hand side of the cowl for the instrument panel. The actual shift column has the same layout as that of a Toyota Prius. But rather than pulling back on the shifter for the “Engine Braking” mode, it engages manual mode. Having the shifter from a car where performance is an afterthought seemed odd, but it is surprisingly ergonomic and plays well with the other controls.

Under normal driving situations, the LC 500 is rather sedate. Unlike some high-powered cars that want to pounce the moment you tap on the throttle, there’s a subtle swell of power at first. Acceleration almost feels like that of a V12 car or a Bentley. It is confident, yet refined and subdued. In this mode, the LC 500 glides effortlessly over bumps in the road and the steering is light.

Turning the dial to Sport livens up the throttle response and tightens up the steering feel. Sport+ takes this a step further. In this mode, the car feels taut and responsive. Throttle response is lightning-quick and the 10-speed transmission holds shift points up close to the 7,300-rpm redline.

If you’re focusing on the road ahead, you won’t notice the speed-activated rear spoiler, but it’s there. It deploys at speeds above 50 mph and retracts below 25 mph. The LC 500 also features an active sport exhaust system. This is so you don’t annoy the neighbors when idling, but once you engage Sport or Sport+, you can hear the glorious notes of the V8. Under hard acceleration, it sounds fantastic. It also emits terrific burbles and snaps as the LC performs upshifts or downshifts.

Even with all this performance kit, including the four-wheel steering and Torsen limited-slip differential, there’s still a sense of heft. Where the smaller Lexus RC F can be thrown into a turn, there’s a bit more tact and planning when taking a corner in the LC 500. But that’s what the LC is about. It’s not a hard-driving machine. It’s a grand touring car. This is a car designed for some fun driving when called upon, but is really for high-speed road trips. For many, this is a perfect balance. Plenty of high-performance cars are almost too hardcore in their normal driving modes. The LC 500 can be daily driven with ease. And it can roar to life with the push of a button. 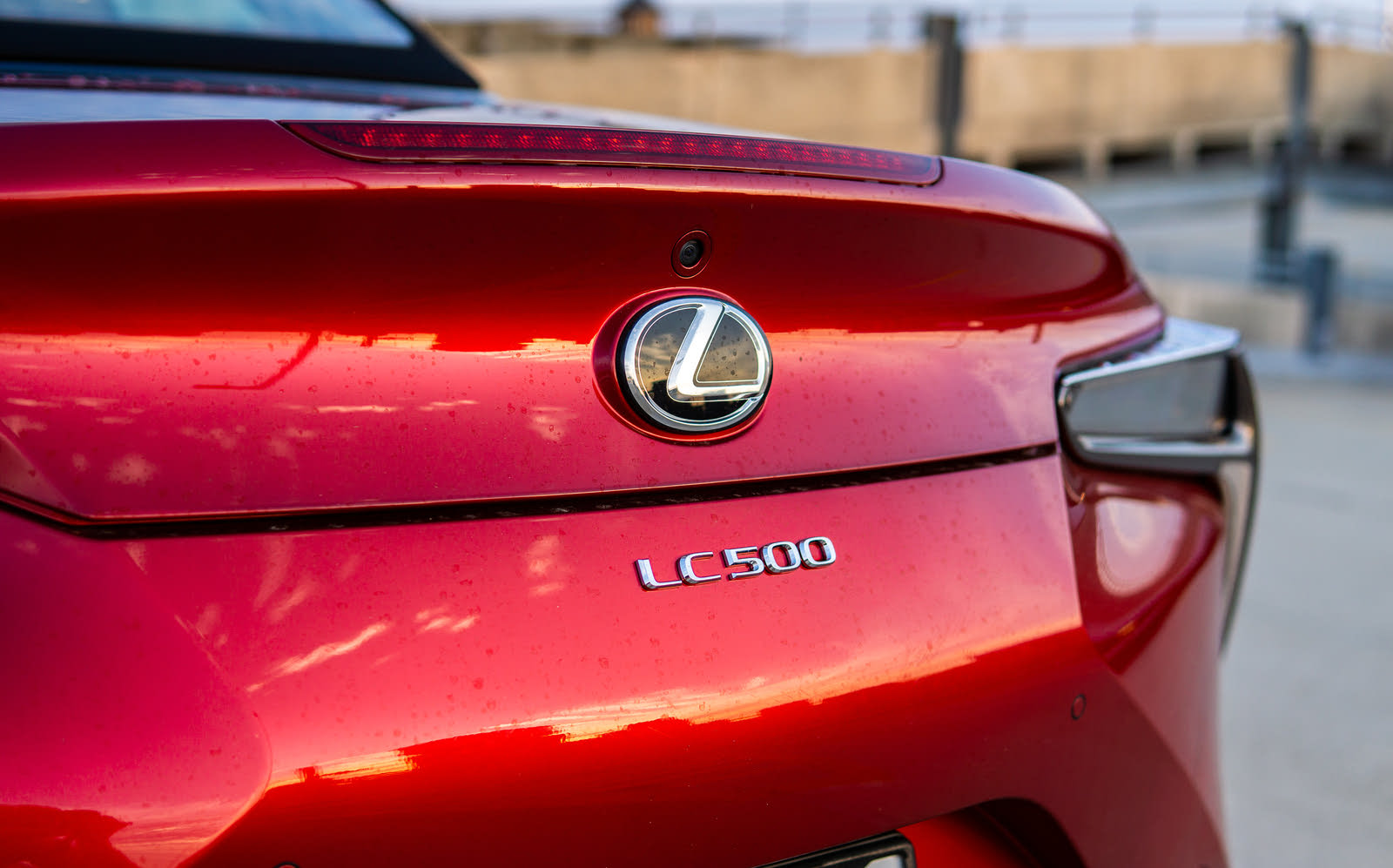 Despite its broad proportions, the LC’s cabin is not particularly spacious. There is more than enough head- and legroom, but the wide center console makes the space for your legs narrow. For larger (or wider) drivers, this could be a concern. If you do find your optimal seating position, the seats themselves are quite comfortable.

The rear seat is another story. They are cramped, which is par for the course in high-end convertibles. There are few convertibles that offer spacious rear seats, and the ones that do err on comfort solely over any real performance.

It is actually quite refreshing to a soft top on the Lexus LC 500 convertible. The power-retractable hardtop had its moment in the ‘00s. Those power hardtops offered the “protection of a hardtop,” but they had their downsides. For one packaging was difficult. Automakers had to learn how to fold and stow the panels on the scale of a Michael Bay Optimus Prime. And when the top was up, many of these hardtop cars just looked awkward. Far easier it is to develop a more robust soft top that blocked out the wind noise.

The top itself can open or close at speeds up to 30 mph. The toggle for operating the top is hidden beneath a slick panel in the center console. When the top is down, the combination of windscreens and windows up creates an impressive cocoon that forces the wind over the occupants. This relies on the rear air screen being installed in the rear seat area, rendering the rear seats unusable. Considering the LC has only five cubic feet of trunk space, that rear seat area is probably where your bags would go on a long trip. If you do plan on driving late into the season, the LC 500 Convertible also has neck heaters built into the seat-backs. 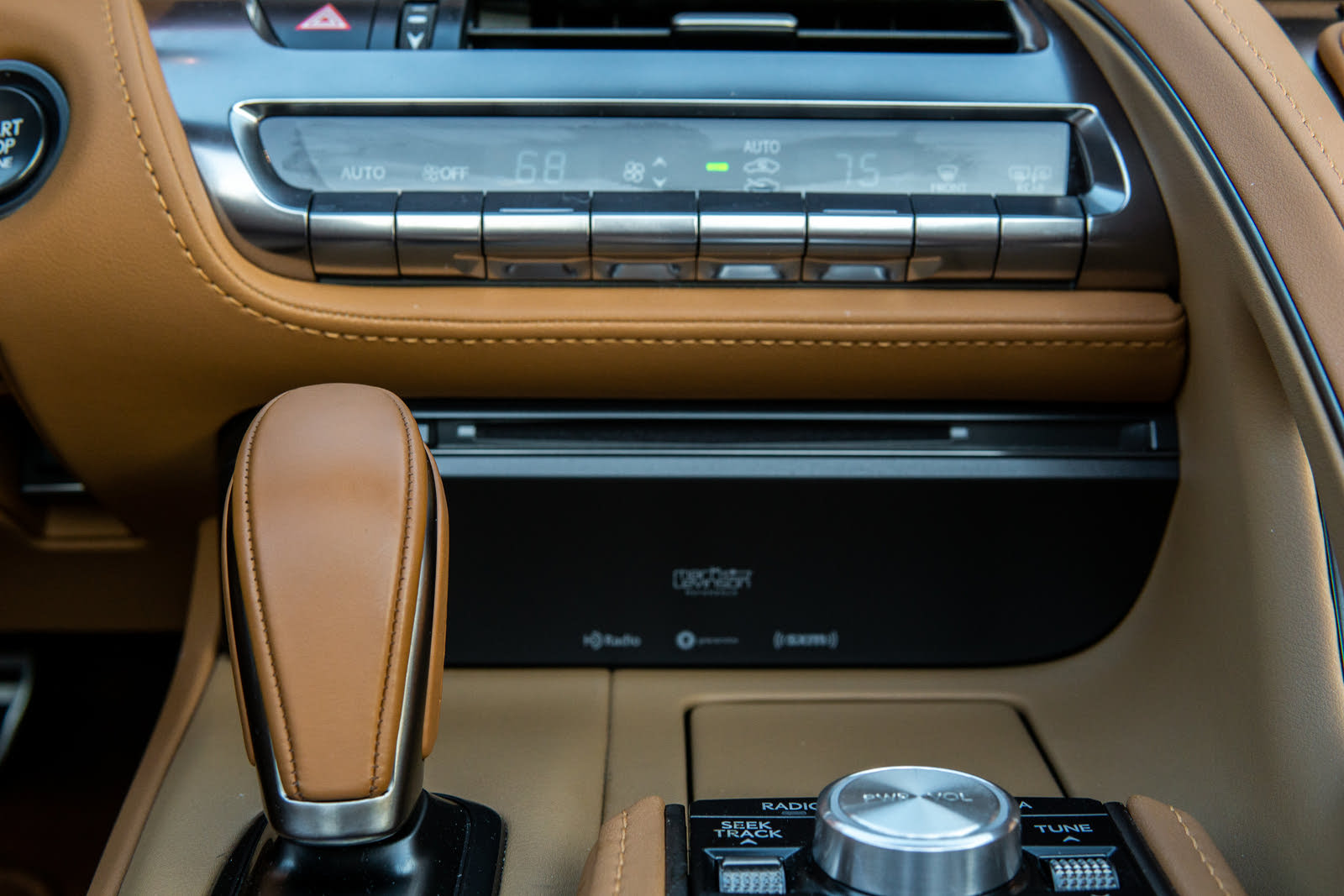 The LC 500 comes equipped with the Lexus Enform infotainment system. It features a 10.3-inch digital screen, operated by a trackpad in the center console. In some shape or form, Remote Touch has been a staple of Lexus cars for the past decade and has evolved to be somewhat intuitive. But it is still not as intuitive as a touch screen or giving the driver the option of both. In fact, Lexus is finally making the move to remote-and-touch control with the 2021 IS sedan. It will be interesting if that update makes its way to the smaller-volume LC. But Lexus has done well to keep its infotainment system relevant, and in 2020 added Apple CarPlay. For 2021, Lexus has added Android Auto to the mix.

The LC also features a performance-inspired instrument panel. It is minimalist and features a siding center dial. Nearly all the critical driver information is presented within that center dial. The information changes if you change the drive mode to what is critical for that mode. This instrument panel is inspired by the 2011-2012 Lexus LFA supercar. In fact, a great deal of the LC's styling is an evolution of that car. 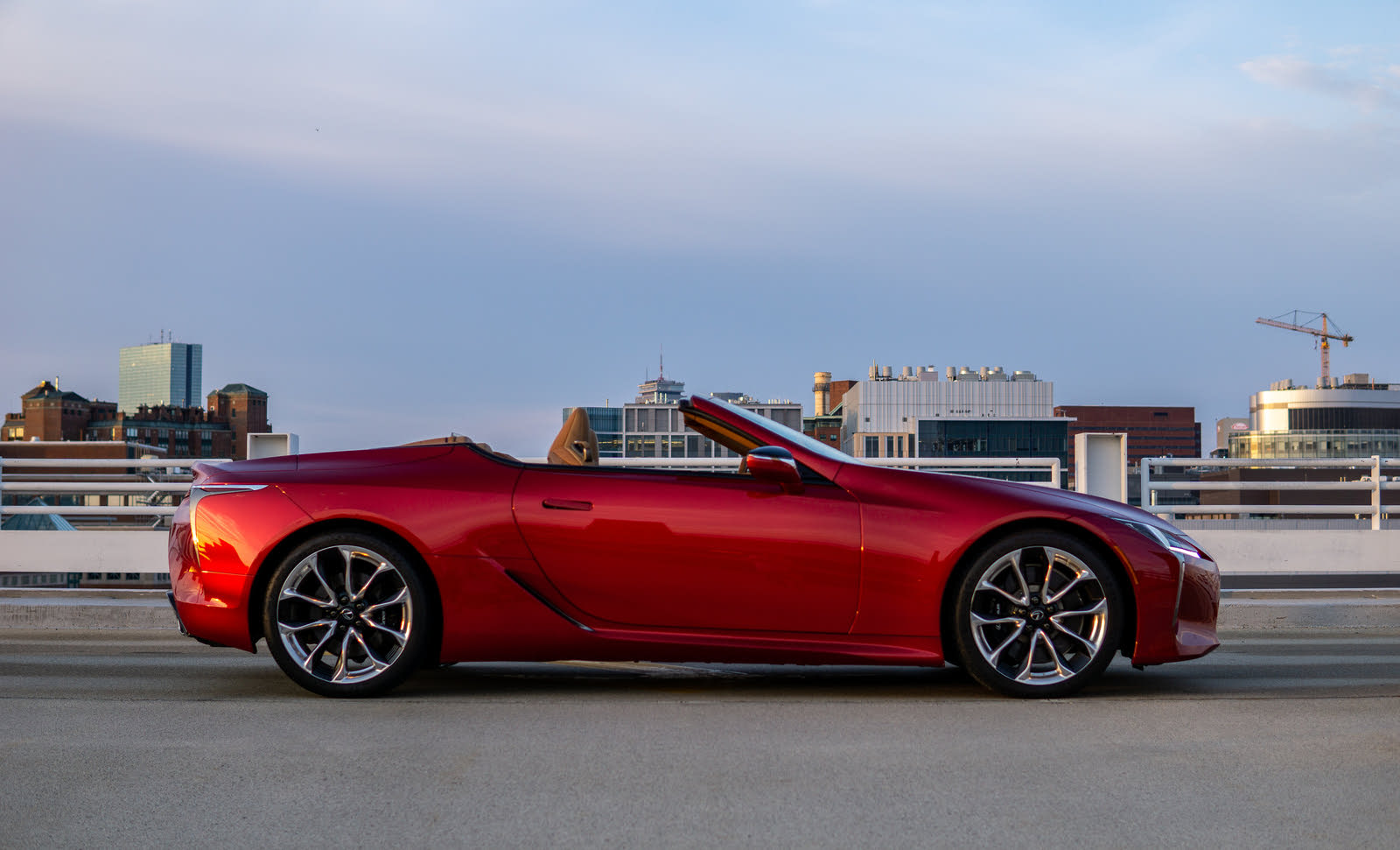 This is in addition to a full array of front- and side-impact airbags, traction control, and a tire-pressure monitoring system. Intuitive Park Assist with Auto Brake is one of the few optional safety features. But one of the few limiting factors to the LC’s safety is its visibility. The convertible has massive rear pillars that offer large blind spots. The only way to really be sure what’s in your blind spot is to drive with the top down. 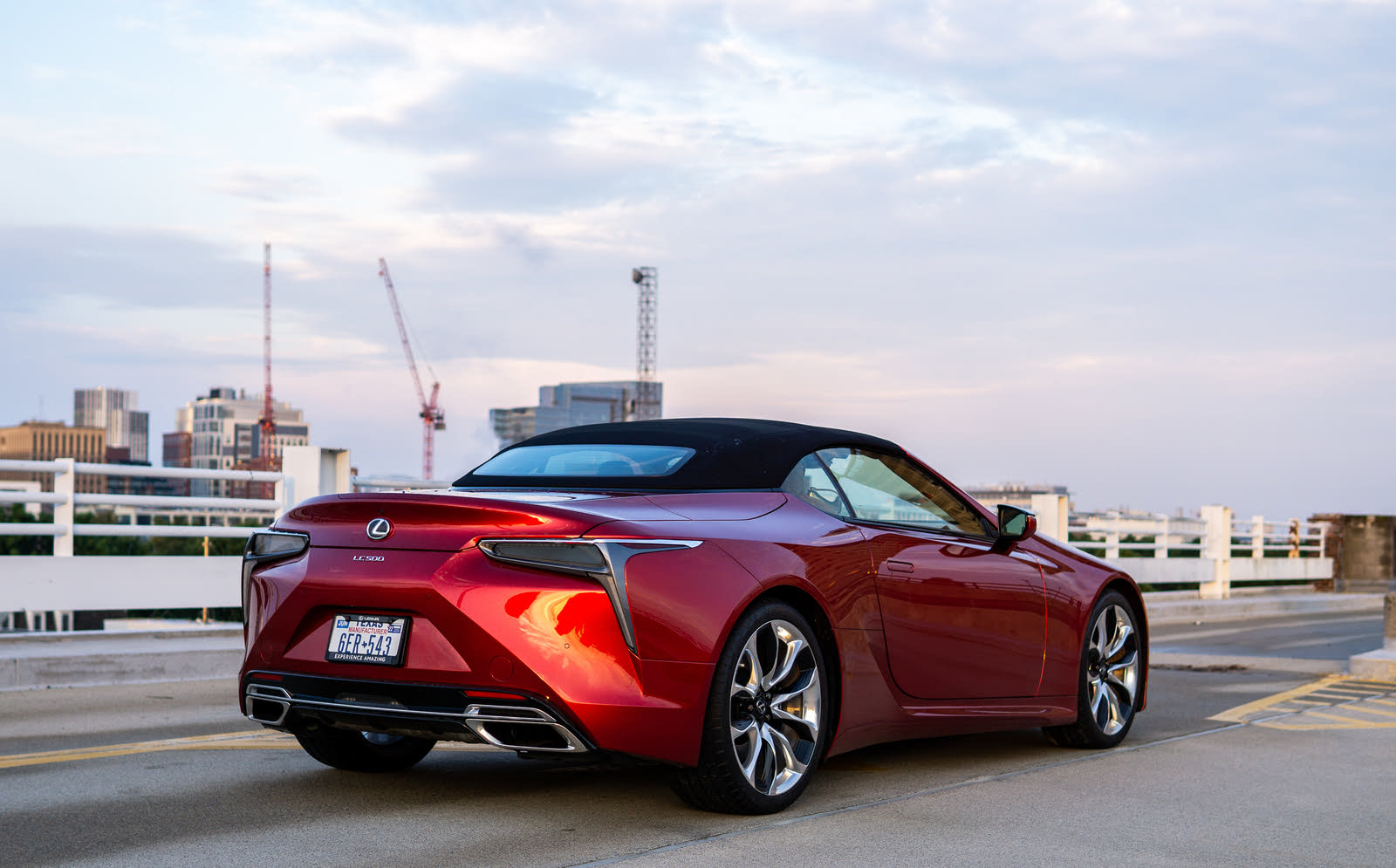 With competition like the BMW M8 Convertible, Porsche 911, and Mercedes-Benz AMG GT, there are certainly higher-performing rivals. But that’s not what the LC is about. It has more than enough power and performance but places a higher priority on the joy of a long drive. And with looks that punch well above its weight, the LC has a supercar-like aura, but at half the price.

Enter your zip to see incentives for a new LC in your area.

HOW TO FIND A SPECIAL CAR