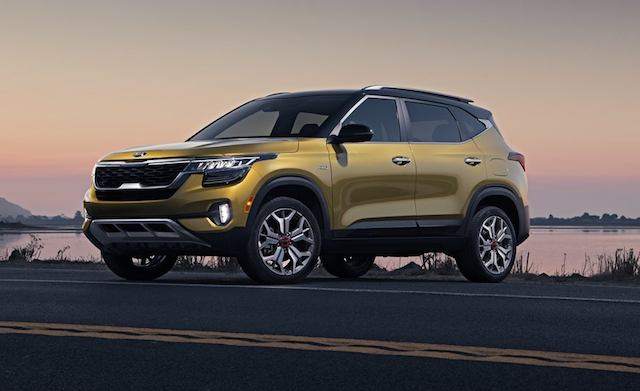 Looking for a New Kia Seltos in your area?

Average user score
4.3 ⁄ 5 stars
Based on 7 reviews
Review by OSUrhino05 — I’ve driven every trim. And with comparable models at other dealers, you can’t get any more bang for your buck currently than the Seltos sx. If you want the upgraded sound, upgraded safety features, u... Read more
Review by Guru945NF2 — Very well priced to attract buyers. Great value for the price. Read more
Review by wrightjw — not many cars get my seal of approval. This one is exceptional. Read more

The Kia Seltos raises the subcompact-SUV bar with a high-quality cabin, refined driving dynamics, and plenty of cabin and cargo space. 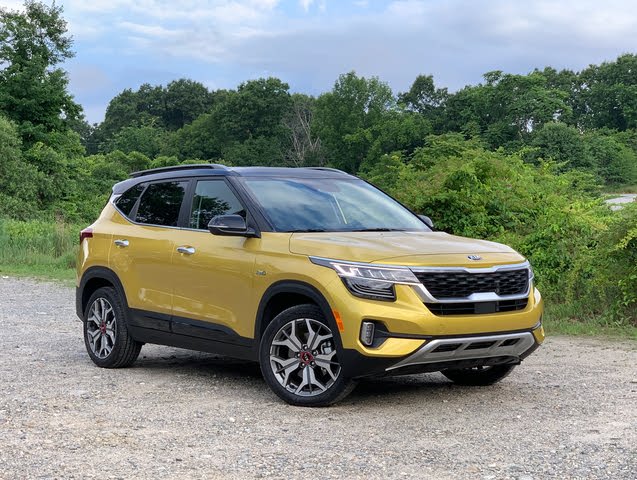 The subcompact SUV segment has now grown to 18 vehicles and counting. It is one of the fastest-growing vehicle segments among new cars. This is in large part due to the combination of usable cabin space, efficiency, price, and confidence-inspiring ride height.

But even within this segment, there are two classes of vehicles. There are ones that feel somewhat watered down, such as the Ford EcoSport, Chevrolet Trax, and Nissan Kicks. And then there are subcompact SUVs that do not force the buyer to compromise. Options like the Hyundai Kona, Mazda CX-30, and Honda HR-V, and Subaru Crosstrek scale down the size of the SUV without pairing back on the quality or features.

The all-new 2021 Kia Seltos, slotted below the compact Kia Sportage and midsize Kia Telluride and Sorento, is very much in the latter group, and it may lead the pack out of the gate. The Seltos provides a high-quality cabin, the latest infotainment and safety technologies, and driving dynamics that go well beyond the segment status quo. 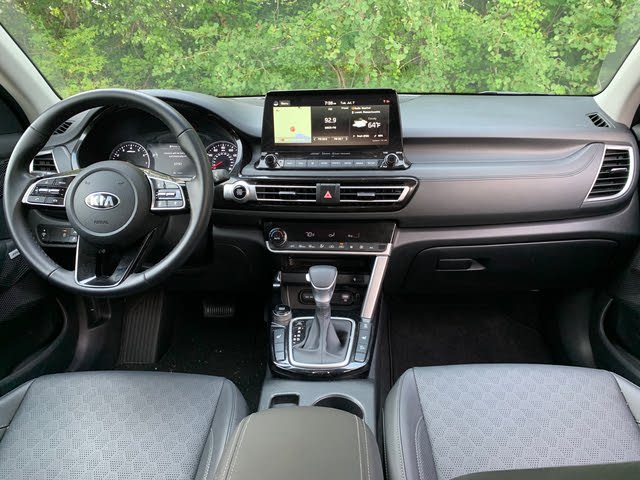 Despite its classification as a subcompact SUV, the new Seltos has a big-car feel to it. It has an upright layout with a commanding view of the road. The headlight design is a bit busy, but it flows well into the grille styling. Though not designed for off-roading (the Seltos is not a Jeep), the lower front bumper has an aggressive approach angle, usually associated with getting off the beaten path. Our test model also featured the two-tone roof design, as is the current design trend among many cars and SUVs. The red circles around the wheel centers are also a nice touch, hinting at its on-road driving dynamics. There’s a lot going on, but it all works together.

The interior has an intuitively straightforward design layout found on most modern Kias. The clean lines and seamlessly integrated tech features have influences from more upscale brands, like that of Audi. The clean LCD screen for the climate controls adds some visual symmetry with the touchscreen atop the dash. The “handle” that frames up the right side of the tray below the center stack is a nice touch and underscores the utilitarian, yet sporty, nature that Kia is going for here.

Moving up to the S trim adds LED daytime running lights, a satin finish to the exterior belt-line (runs along the bottom of the side windows), and integrated roof rails. Inside, the S adds combination leatherette-and-cloth upholstery, a leather-wrapped steering wheel, and unique blue stitching for the dash.

The S Turbo’s content is largely the same as the EX, though it includes the more powerful engine, 18-inch alloy wheels, and some additional driver assistance features. Meanwhile, the SX Turbo is the range-topping trim for the Seltos. It provides LED fog lamps, the larger 10.25-inch infotainment touchscreen, a rear cargo cover, an upgraded stereo, and additional driver assistance features. 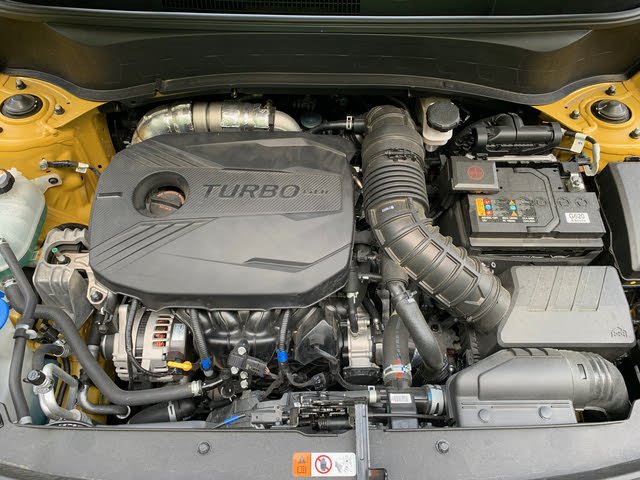 The LX, S, and EX trims come equipped with a 2.0-liter four-cylinder engine making 146 horsepower and 132 pound-feet of torque. It sends power through a continuously variable transmission (CVT) to the front wheels or all-wheel drive (AWD). AWD is standard on LX and EX and is optional on the S.

The base engine is fine off the line and for scooting around parking lots or cities. But at higher speeds, the engine lacks any guts. You’re left counting the seconds it takes to get up to highway speeds. As such, we’d recommend checking out the turbocharged engine, found in the S Turbo and SX Turbo.

As the name suggests, these Seltos models come equipped with a turbocharged and intercooled 1.6-liter four-cylinder engine. It makes 175 horsepower and 195 pound-feet of torque, sent through a 7-speed dual-clutch automatic transmission to standard AWD. There’s enough power at low speeds to spin the tires out of a green light if you’re not careful. On the highway, there is ample power to get up to speed and make a passing maneuver.

Frankly, the power from this engine almost feels misplaced compared to the light steering feel. That is until you take advantage of the Drive Mode dial. It provides Normal, Sport, and Smart drive modes. Sport livens up the throttle response and shift mapping. Just as crucially, it tightens up the steering response so that it feels weighty and sporty enough to match the brisk acceleration. Smart Mode responds to your driving style in real-time and adjusts all these systems appropriately.

Despite its upright layout and 7.3 inches of ground clearance, the Seltos shows little body roll in turns. In Sport Mode, turn-in feels quick and nimble. Higher-speed turns feel planted and level. And yet, it is still smooth over bumps in the road. This is a combination of attributes one would sooner expect from a luxury SUV.

In short, the Kia Seltos drives and handles far better than one would expect of a small crossover. 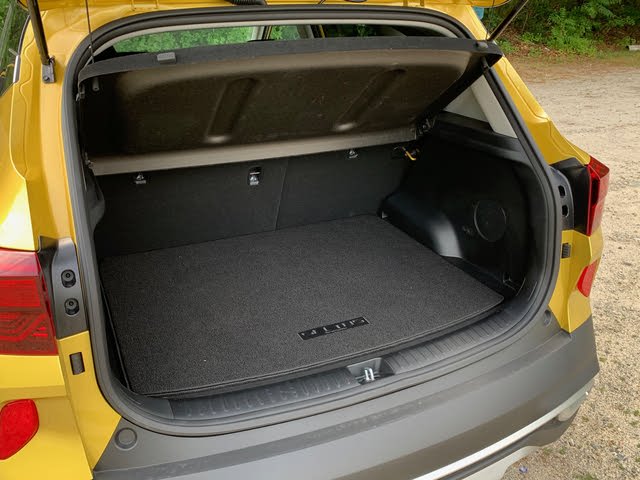 The Kia Seltos provides a solid amount of cargo space. It has 26.6 cubic feet behind the rear seats, and with the rear seats folded, that number grows to 62.8 cubic feet of cargo space. That makes it one of the most spacious subcompact SUVs on the market, and it even bests some compact SUVs. The range-topping SX Turbo also comes with a hard cargo cover that also doubles as a tray for small items.

There are plenty of cubbies and compartments spread around both rows of seating. The front passengers can enjoy large cubbies and bottle holders in the doors, as well as a spacious center console and tray between the driver and front passenger.

The Seltos provides an impressive amount of rear-seat space, with plenty of head- and legroom. This was once a rarity among subcompact SUVs, but as we mentioned, there are two tiers of small crossovers, and as the Seltos is among those that deliver in this area. 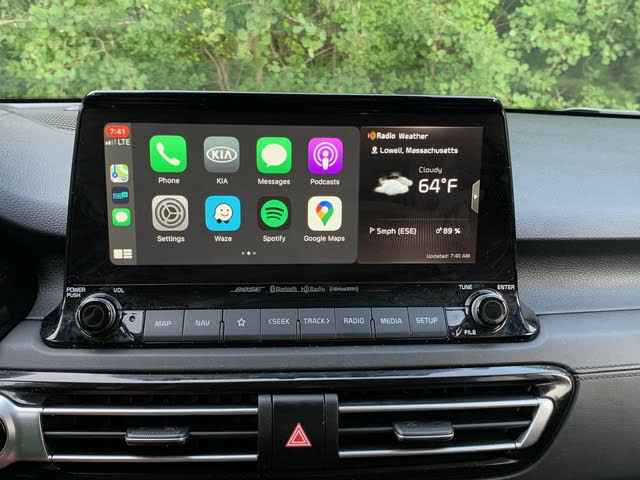 The base S trim comes standard with a 3.5-inch TFT digital screen in the instrument panel, as well as an 8-inch touchscreen infotainment system. The SX Turbo comes with a Bose premium sound system and a 7-inch digital display screen in the instrument panel, as well as a large 10.25-inch touchscreen infotainment system. It is large enough that it can display Apple CarPlay/Android Auto and still has excess space on the right third of the screen. This space can be toggled between radio, climate, or navigation data.

One frustrating thing occurred when plugging in a smartphone via USB. For cars without wireless projecting, this is obviously necessary to utilize CarPlay. But if you are listening to the radio, it will default to your phone’s music, be it Spotify, podcasts, or another audio output. It is far more helpful to be able to plug your phone in and keep listening to whatever you were listening to. What if it defaults to an embarrassing playlist or podcast?

Another annoying quirk was that among the two USB ports, only one allows you to connect via data. The other one is just to power a device, and that one is backlit. In the dark, you may go to plug into the backlit port expecting it to connect your phone, and nothing happens.

But by and large, Kia’s infotainment is straightforward and intuitive. This is thanks in large part to the helpful home button and the redundancy of hard buttons below the touchscreen. With these tools, menu navigation is very simple and is seldom distracting. 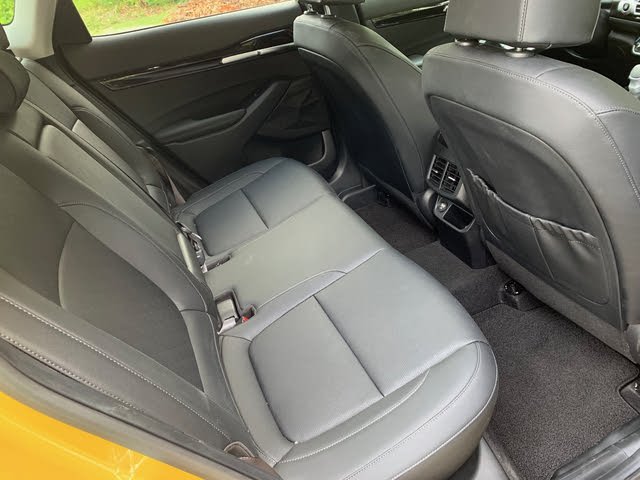 The Seltos comes standard with a full array of front- and side-impact airbags, electronic stability control, a tire pressure monitoring system, and child-seat anchor latches for the rear seats.

All trims but the base LX include a full suite of driver-assistance safety features. This includes forward-collision avoidance with automatic emergency braking and pedestrian detection, lane-departure warning, and automatic high beams. The EX adds blind-spot monitoring and rear cross-traffic alert. The range-topping SX adds even more, including adaptive cruise control with idle stop-and-go that can follow the flow of traffic without the driver applying the brake or accelerator. The SX also provides cyclist detection for the collision avoidance system. It also includes a feature that can detect if it is safe to exit the vehicle when parallel parking on the street.

One feature that speaks to “driver assistance” more than “safety” is the one that alerts you if a vehicle has pulled away in front of you when you are stopped. Think about when you are at a stoplight, you may glance out the side window or are looking at the infotainment touchscreen. You may not have noticed the light turning green and the vehicle in front of you has started moving. This alert may not seem like much, but it saves you the embarrassment of that courtesy honk from the driver that might be waiting behind you. 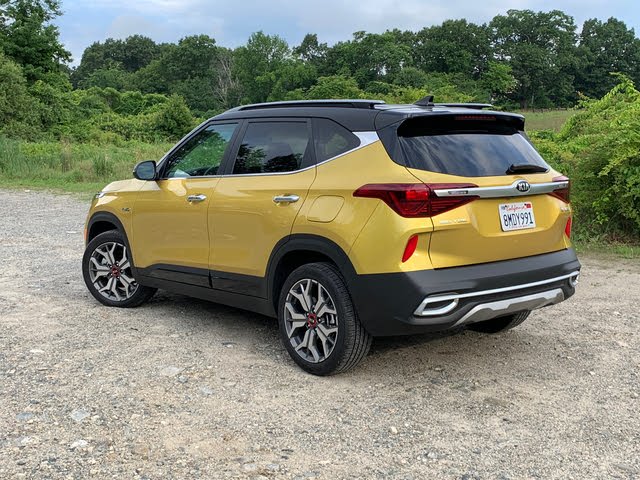 The most efficient powertrain for the 2021 Seltos is the base 2.0-liter engine paired with front-wheel drive. It returns fuel economy of 29 mpg city, 34 highway, 31 combined. Selecting AWD with this engine brings fuel economy to 27 mpg city, 31 highway, 29 combined. Our 1.6-liter AWD test car is rated at 25 mpg city, 30 highway, 27 combined. In a week of combined city and highway driving, we observed an average of 24.5 mpg, although it should be noted we had it in Sport mode quite often.

The Kia Seltos has raised expectations for the subcompact SUV segment. From driveability to cabin quality, to space and utility, this car punches above its weight. In the past, opting for a subcompact meant compromise even among the better options the segment. With the Seltos, you no longer need to compromise. In a competitive segment, the newest addition to the Kia family is instantly among the leaders in the pack.

kevin The style looks good, I would say it needs more hp

Have you driven a 2021 Kia Seltos?
Rank This Car

Enter your zip to see incentives for a new Seltos in your area.

Looking for a Used Seltos in your area?

I have selected sonet htx but price for petrol and diesel same. 1. Living in ncr 2. Yearly running 12000 3. Ncr registration is 10 years for diesel Confused in milenge and 5 years extra life.please a...

Sir, I have selected KIA sonet HTX model to buy both petrol and diesel engine are on same price which engine to buy. My daily run is 40 KM . can i buy petrol and after few year installed CNG. Pleas...

AS asked a 2021 Kia Seltos General question 10 months ago