Looking for a New INFINITI QX80 in your area? 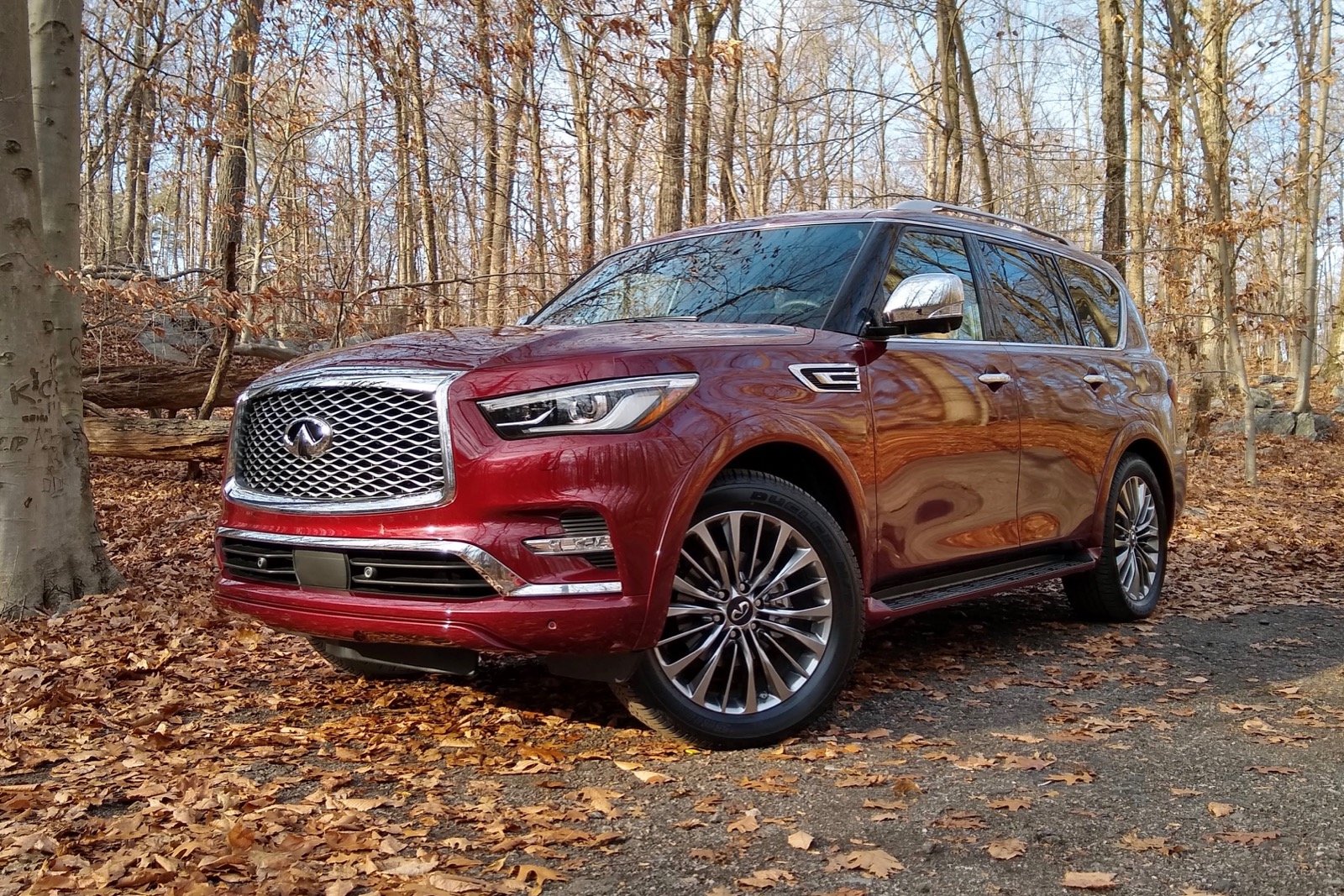 You might not expect Nissan’s luxury brand to make a hulking land yacht with globetrotting off-road capability, but that’s exactly what you get with the 2021 Infiniti QX80.

The QX80 is one of the last old-school SUVs, boasting body-on-frame construction and an available four-wheel drive (4WD) system with low range. It’s based on the Nissan Armada, which in turn is a rebadged version of the overseas-market Nissan Patrol—a legendary off-roader.

As a full-size luxury SUV based on a model from a mainstream brand, the QX80 follows the same formula as the Cadillac Escalade, Lexus LX 570, and Lincoln Navigator. In size, price, and prestige, it could also be considered a rival to the Land Rover Range Rover, BMW X7, and Mercedes-Benz GLS-Class, but these SUVs have more modern unibody construction.

The QX80 gets some small updates for the 2021 model year, including an improved version of Infiniti’s Smart Rearview Mirror, and a reshuffled trim-level lineup, including base Luxe, midlevel Premium Select, and range-topping Sensory. Our test vehicle was a 4WD Sensory model. 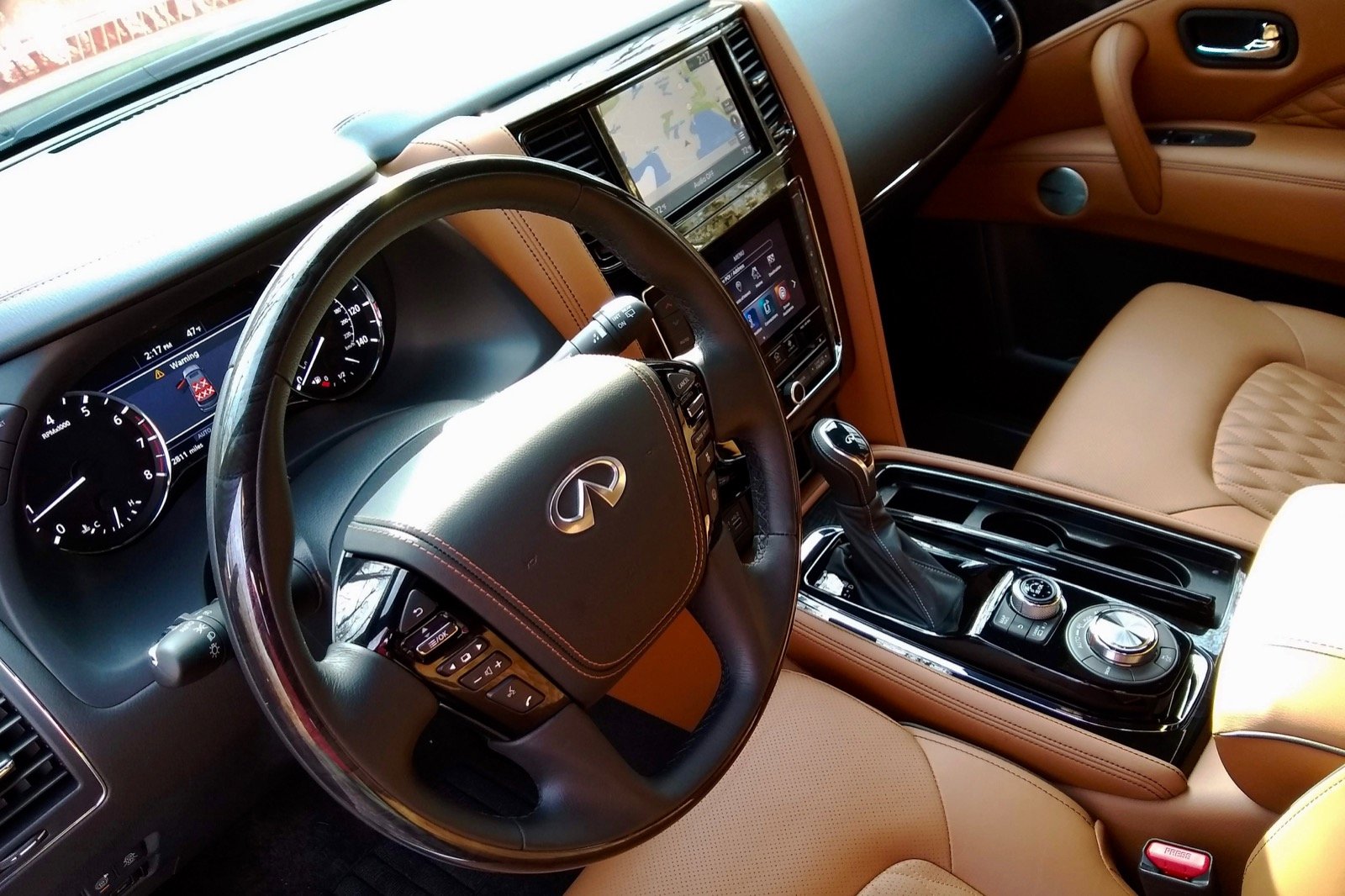 Reflecting its origins, the QX80 wears a mix of Nissan Armada and Infiniti styling elements. The basic body shell carries over from the Armada, which is evident in the profile of the roofline and the distinctive curve of the rear windows. Both SUVs also sport vents on their front fenders. While many other SUVs have switched to car-like unibody construction for its added rigidity, the QX80 and Armada stick with body-on-frame construction, with a separate body and chassis.

The QX80’s face is all Infiniti, however. Introduced for the 2018 model year, the current front-end styling includes the same grille (with dark chrome trim available) and headlight design as other, smaller, Infiniti SUVs. This gives the QX80 an assertive look that’s not overly aggressive or overly flashy, compared to some other full-size luxury SUVs. It also nicely distinguishes the Infiniti from its Nissan sibling.

The QX80 gets standard LED headlights, taillights, and fog lights. The headlights get automatic high beams and windshield-wiper interlock; an auto-leveling feature is also available. The base Infiniti QX80 Luxe trim level rides on 20-inch wheels, but the QX80 Premium Select and Sensory trim levels get 22-inch wheels.

The interior design is much closer to the Armada. Infiniti dresses things up with wood trim, a smattering of contrast stitching, and standard leather upholstery (perforated semi-aniline leather on Sensory models), but everything else is still recognizably Nissan. The dashboard has the same shape, with two scalloped sections defining the driver’s and front passenger’s sides. The 4WD selector and other switchgear also appear to carry over from the Armada. The QX80 even has a foot-operated parking brake—not exactly a high-end setup.

There’s nothing wrong with the interior, as it still feels properly luxurious. But buyers looking for exclusivity might feel disappointed. 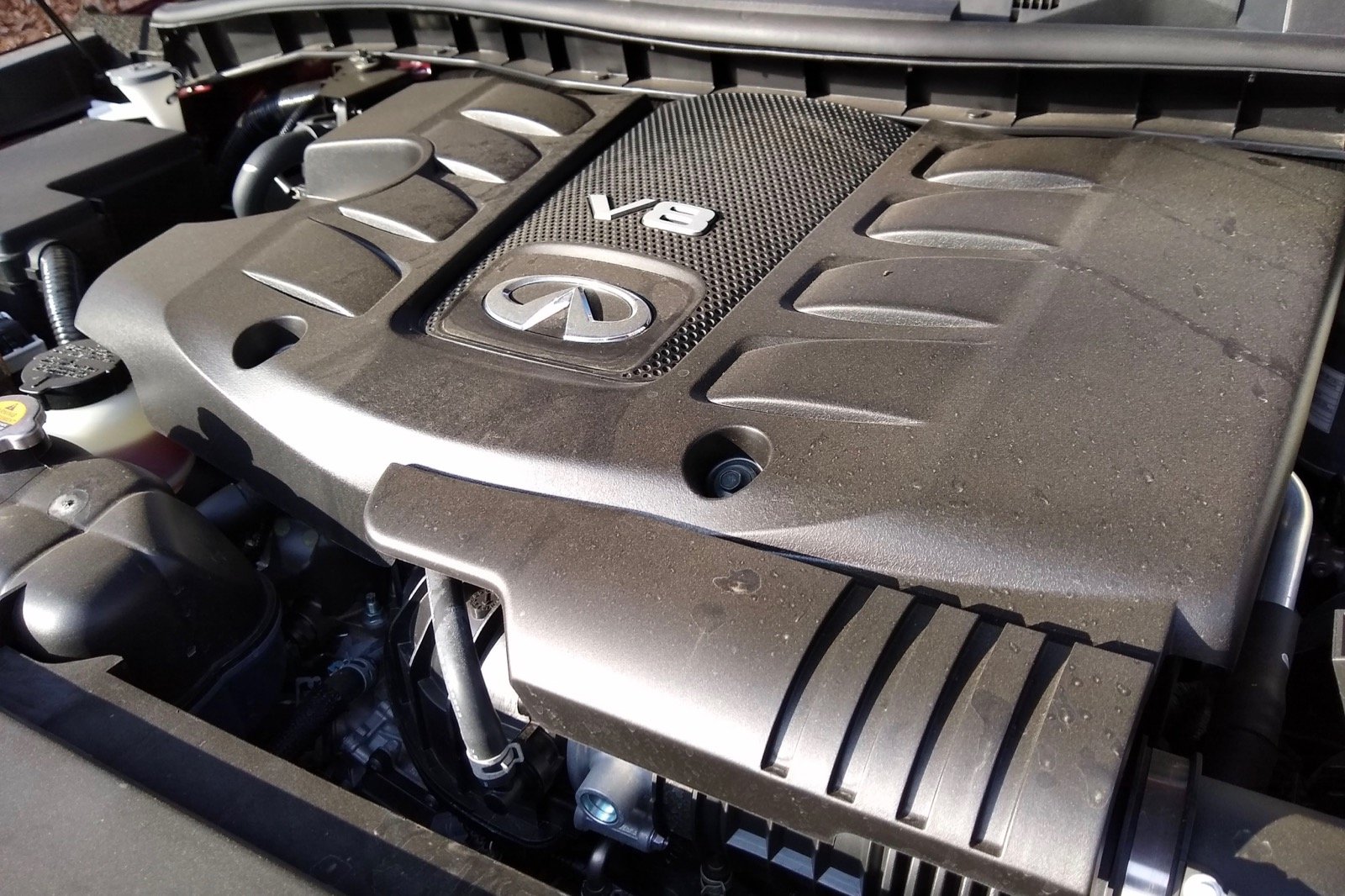 All QX80 models get a 5.6-liter V8 engine and seven-speed automatic transmission. Rear-wheel drive (RWD) is standard; 4WD is a $3,100 option.

The naturally-aspirated V8 makes 400 horsepower and 413 pound-feet of torque, which is a bit less than a V8 Cadillac Escalade or the twin-turbo V6 Lincoln Navigator, but still plenty to get this big SUV moving. The engine felt very responsive in all situations, taking the stress out of highway overtaking. Transmission shifts could have been smoother, however. The gears felt more like they were being crumpled than shifted.

Body-on-frame construction often yields a truck-like ride, but Infiniti gave the QX80 front and rear independent suspension, with a rear auto-leveling feature that automatically adjusts for cargo or a trailer. QX80 Sensory models like our test car also get standard Hydraulic Body Motion Control, which is designed to limit body roll during cornering.

Thanks to the independent suspension, the QX80 had a very comfortable ride—exactly what you’d hope to get in a luxury vehicle. Typically for a body-on-frame vehicle, some shudders were detectable over bumps, but nothing too bad, especially considering that our test car rode on 20-inch wheels. The interior was very quiet as well.

Not surprisingly for a big SUV, the QX80 felt less composed in corners than it did on the highway. Even with Hydraulic Body Motion Control, the threshold for uncomfortable levels of body roll was fairly low. Vehicles like this aren’t designed for aggressive cornering, but even the slightest bit of exuberance made the QX80 list like a torpedoed ocean liner. However, our Sensory test car’s speed-sensitive power steering helped promote the relaxed driving style needed to avoid that. It was fairly slow, but with enough precision to confidently place the QX80 on the road.

The advantages of body-on-frame construction are towing and off-road capability. The QX80’s 4WD drivetrain features low range, and a forward skid plate is standard equipment, so this SUV should be better off-road than many of its competitors. However, its size might be a liability on tight trails, and the factory wheel-and-tire combinations are aimed more at style and on-road ride quality than off-road traction. The QX80 also lacks the off-road driver aids of the Lexus LX and Land Rover Range Rover.

The QX80 has a maximum towing capacity of 8,500 pounds when properly equipped. That’s more than a Cadillac Escalade, but the Lincoln Navigator can tow up to 8,700 pounds in certain configurations. 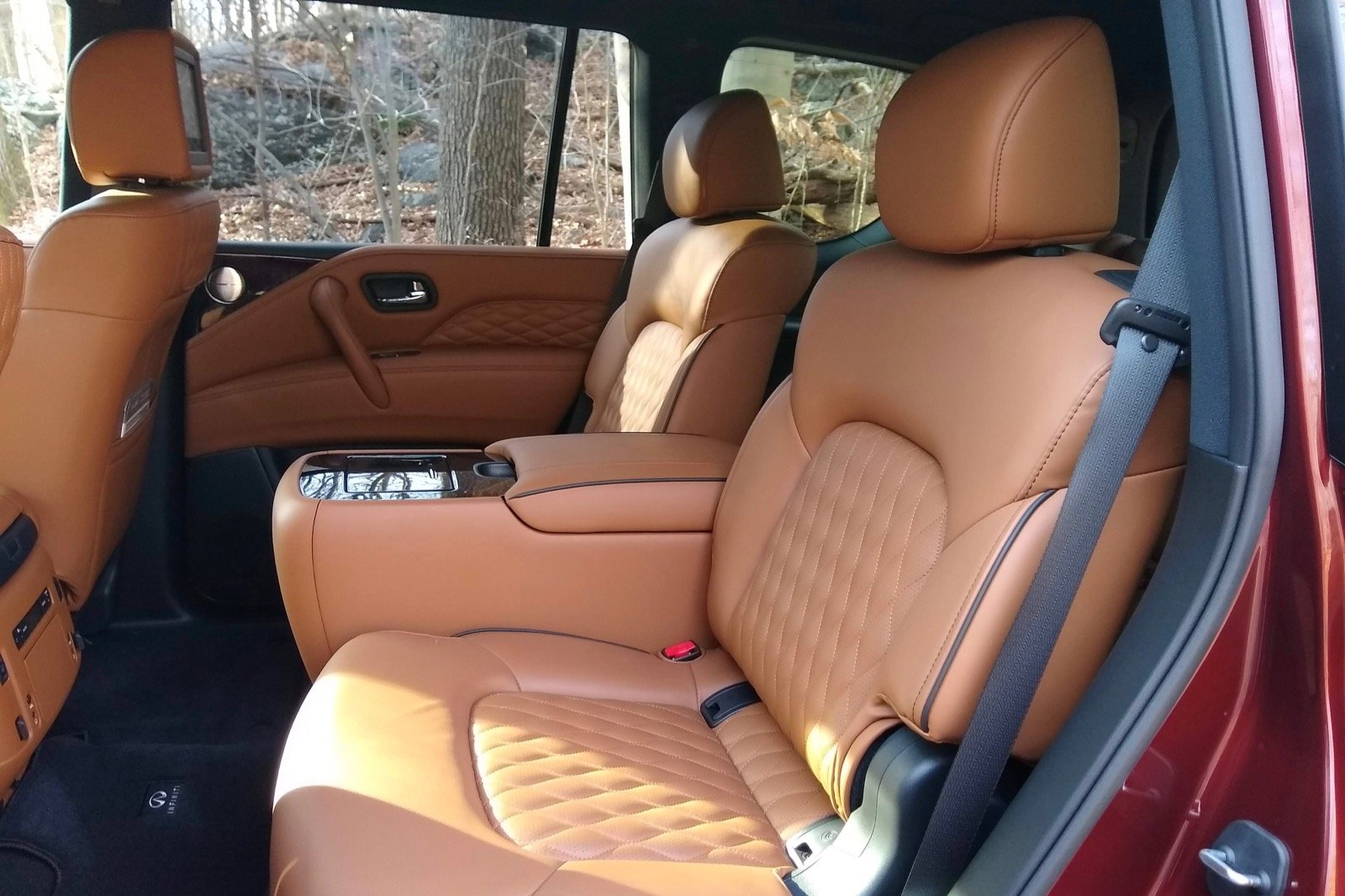 Standard features include a 10-way-adjustable power driver’s seat and an eight-way front passenger’s seat, with two-way lumbar support for both (and heating and cooling on Sensory models). However, the bottom cushions of both front seats lacked thigh support, which could prove uncomfortable over longer trips. A driver’s memory system for the seat, mirrors, and steering wheel is also standard. A pair of USB ports and a 12-volt outlet are located on the center stack.

Passenger space in all three rows is competitive but not class-leading, and the Cadillac Escalade and Lincoln Navigator also offer long-wheelbase variants with even more space behind the first row. It’s unlikely that most people will feel cramped in a vehicle as big as the QX80, though, as even the third-row seats have enough space for adults. Models equipped with second-row captain’s chairs get a large console between the seats with plenty of storage space, plus climate controls and a pair of USB ports on the back of the front-row console. However, third-row passengers don’t get any charging ports.

Up front, the center console can open from both the front and the back, which is handy for second-row passengers, but the actual amount of storage space is fairly small. The front-door cupholders also aren’t shaped properly to hold drinks in place, and while Infiniti provides two potential spots on the center console to hold your phone, neither can accommodate a phone while charging. 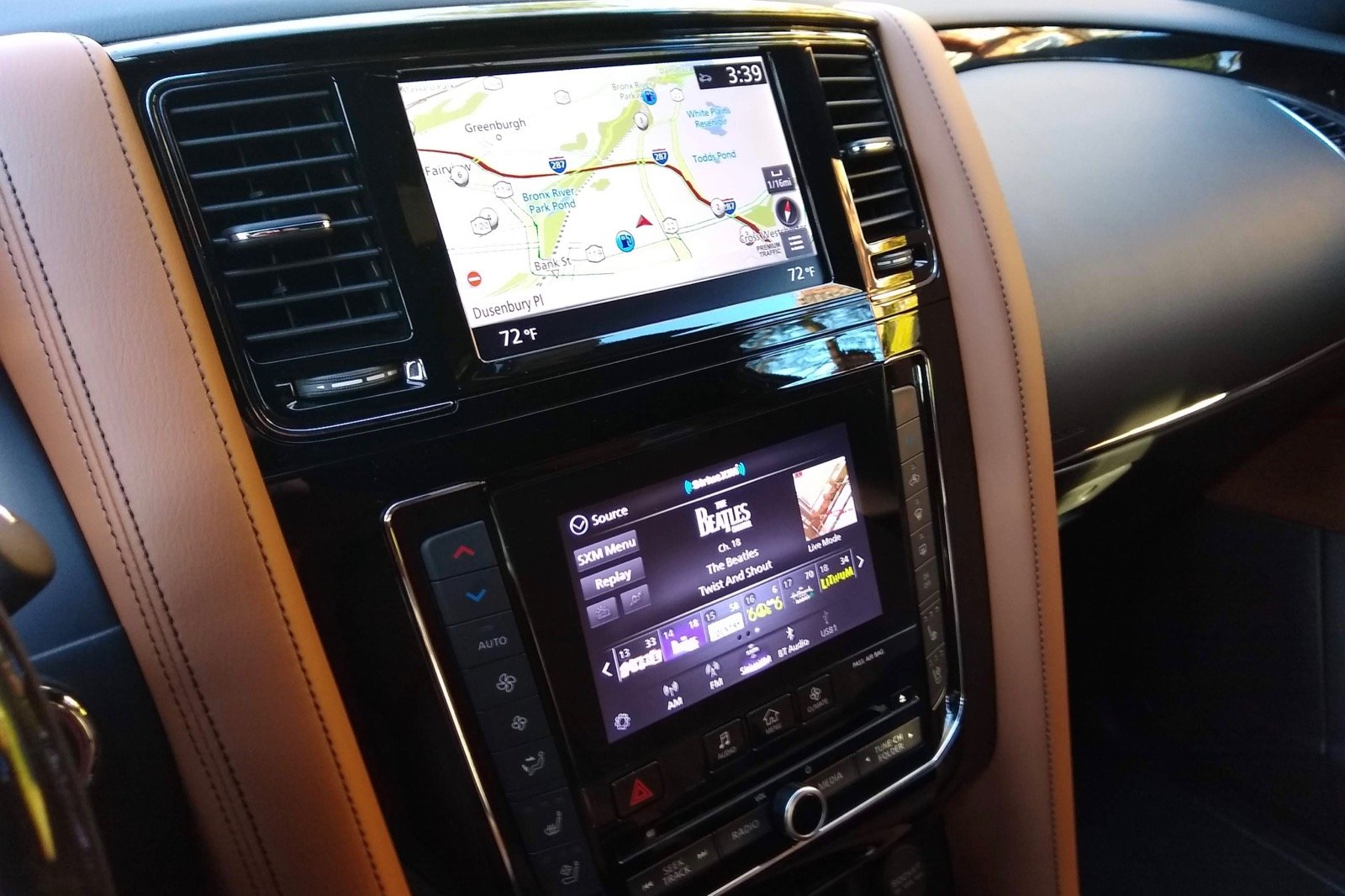 The touchscreens are backed up by an array of analog controls, including a small dial on the center console, buttons on the center stack, and steering-wheel controls. However, none of these things actually help. It took significant trial and error to find out exactly how pressing a given button would affect what was on the screens, while the screens themselves are fairly small, and too far away from the driver for easy use.

It’s as if Infiniti keyed in on specific features without considering the overall user interface. For example, designers thought to include two ways to zoom in on maps—by pinching the screen or using the center-console dial—but not a way to change SiriusXM stations that didn’t involve at least three touchscreen inputs.

At least Infiniti included some helpful tech that makes driving this big SUV easier. The standard Smart Rearview Mirror can switch from a conventional mirror to a streaming-video display with the flick of a switch. That eliminates blind spots created by rear pillars or passengers’ heads. For the 2021 model year, the mirror is bigger (9.6 inches wide, from 8.7 inches before) and cancels out LED flicker from other cars’ headlights. The Around View Monitor 360-degree camera system is also available. It can provide individual front and rear views, as well as an overhead view. 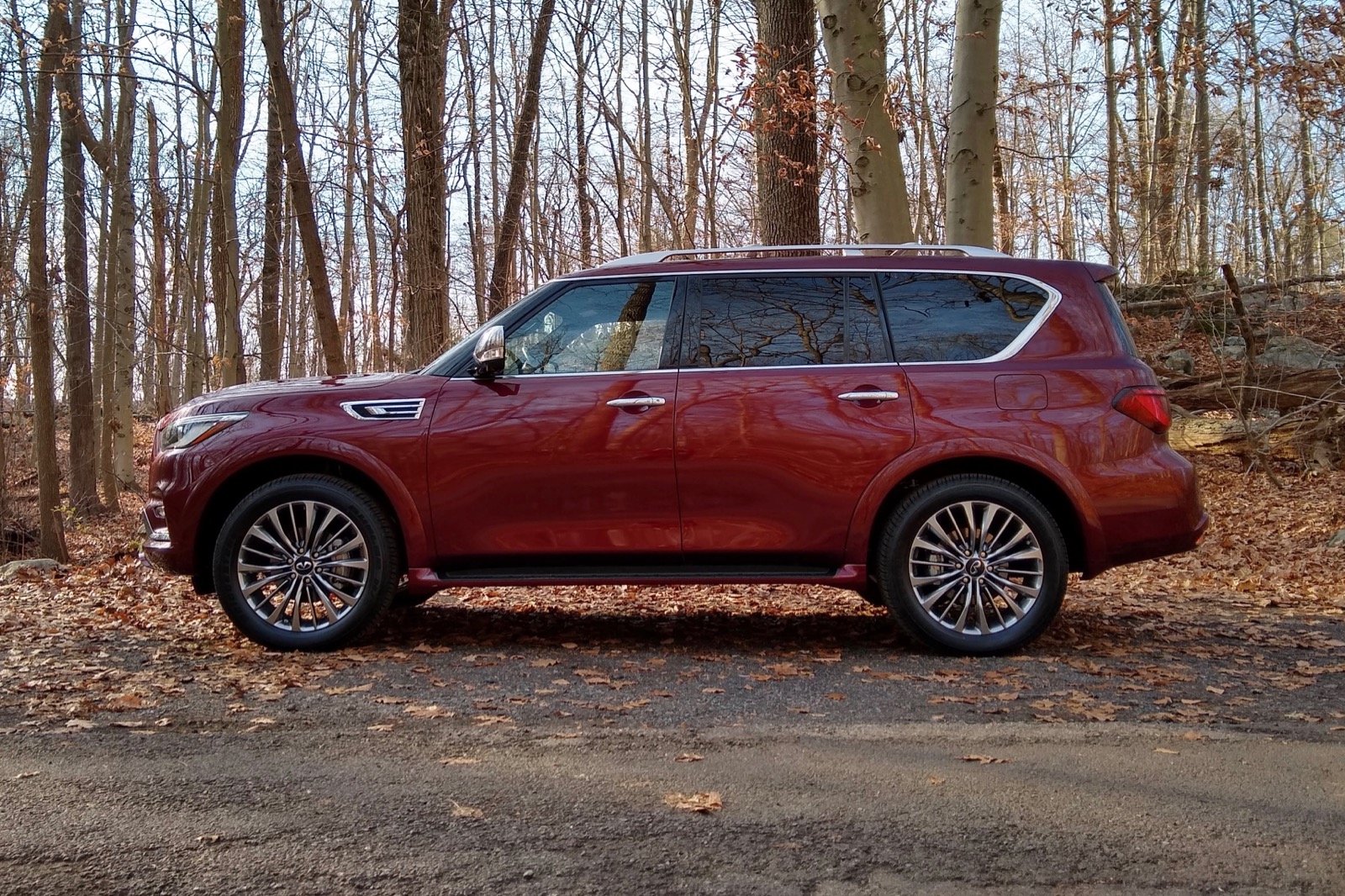 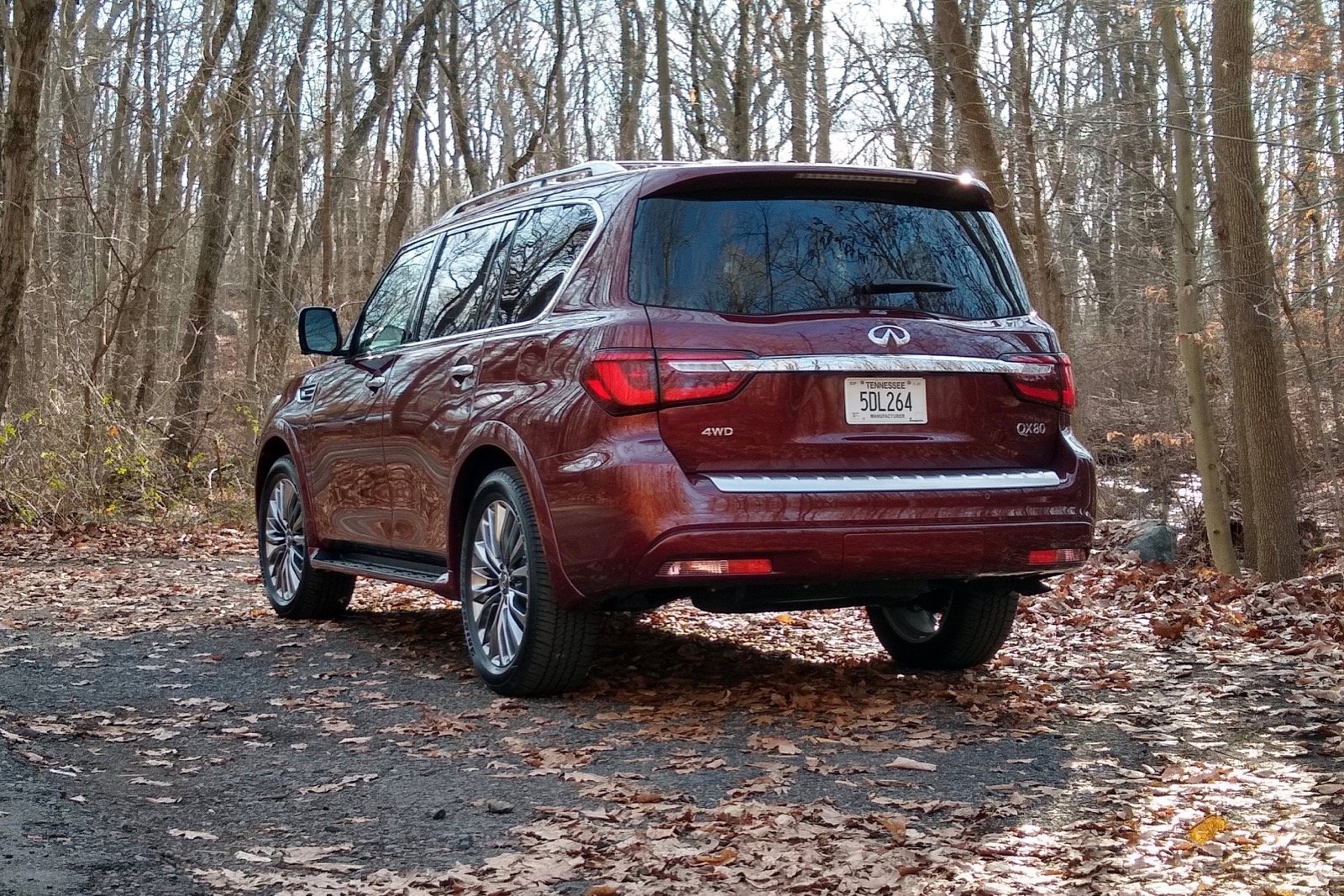 Pricing for the 2021 Infiniti QX80 starts at $70,445 for the base Luxe trim level with rear-wheel drive. Our range-topping Infiniti QX80 Sensory 4WD test car had a starting MSRP of $84,695, but options like illuminated kick plates, welcome lighting, roof-rail crossbars, and Coulis Red paint, as well as a mandatory $1,395 destination charge, brought the final price to $87,035.

For a loaded full-size luxury SUV, that’s a pretty competitive price. The QX80 lacks some of the standout features of the Cadillac Escalade and Lincoln Navigator, such as the Cadillac’s 38-inch display screen and Super Cruise driver-assist tech, or the Lincoln’s 450-hp twin-turbo V6 engine, but range-topping versions of those SUVs scrape against the six-figure barrier.

However, the QX80 is also mechanically similar to the Nissan Armada. The Armada has the same powertrain, the same amount of interior space, and an infotainment system that’s actually a bit easier to use than Infiniti InTouch. But you can get the top Armada Platinum trim level with 4WD for $65,325.

Enter your zip to see incentives for a new QX80 in your area.