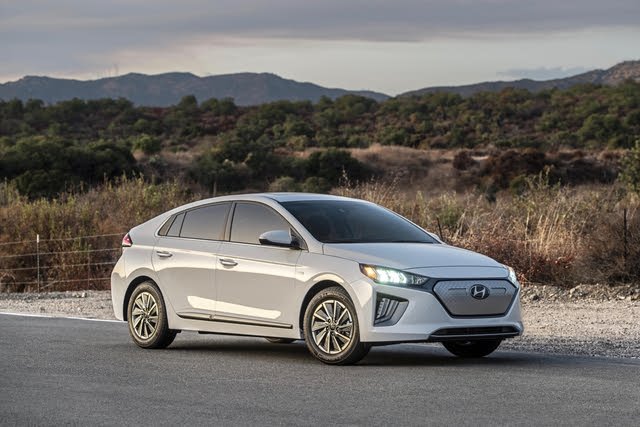 The Hyundai Ioniq Electric is a full battery-electric vehicle (BEV), similar to the Chevrolet Bolt EV, Kia Niro EV, and Nissan Leaf. Since last year’s refresh was so substantial, 2021 brings only minor changes.

The Ioniq Electric Plug-In is powered by a single electric motor, producing 134 horsepower and 218 pound-feet of torque, paired with a 38.3-kilowatt-hour battery pack. It’s rated for 145 miles-per-gallon equivalent (MPGe) city, 121 MPGe highway, and 133 MPGe combined, plus 170 miles of total range. Recharging the battery takes around six hours with a Level 2 AC charger, but standard DC fast charging (Level 3) capability can replenish 80% of the charge state in 54 minutes, according to Hyundai.

Stepping up to the Limited trim adds power-folding side mirrors with turn indicators and puddle lamps, LED headlights, a sunroof, rear climate-control vents, a power driver’s seat, leather upholstery, memory settings, an auto-dimming rearview mirror, Qi wireless device charging, a Harmon Kardon eight-speaker sound system that includes a subwoofer, LED interior ambient lighting, and a 10.25-inch instrument cluster. Unfortunately, the Limited’s infotainment system requires you to have a USB cord for Apple CarPlay and Android Auto, and lacks the wireless functionality of the 8-inch system on the SE.

The Ioniq Electric Plug-In is a simple, no-nonsense electric vehicle at an affordable price.

What's your take on the 2021 Hyundai Ioniq Electric?

Have you driven a 2021 Hyundai Ioniq Electric?
Rank This Car