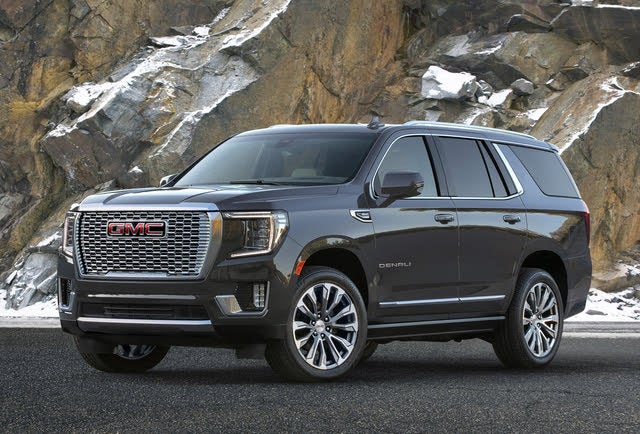 Looking for a New GMC Yukon in your area?

The all-new-for-2021 GMC Yukon incorporates broad changes, larger proportions, and new technology across the lineup. This fifth generation of the Yukon boasts more passenger and cargo space, a more upscale Denali trim, the new off road-capable AT4 trim, and the addition of an optional 3.0-liter Duramax turbodiesel engine. Four trim levels will be offered: SLE, SLT, Denali, and AT4.

Every 2021 Yukon incorporates a new multi-link independent rear suspension (replacing the solid axle), which, with the optional magnetic ride control damping system, offers a wide range of ride quality and handling. Optional air springs allow the ride height to be adjusted over a 4-inch range and include an automatic self-leveling feature. When lifted, the AT4 achieves a nearly 32-degree approach angle.

The redesign enables a lower load floor, increasing cargo space and making for easier loading and unloading. The Yukon’s wheelbase increases almost 5 inches, and its overall length grows by 6.1 inches. Combined with the drop of the floor, these new proportions increase maximum cargo space to 122.9 cubic feet, an increase of 28.2 cubic feet over the 2020 model's. Third-row legroom also increases significantly with the assistance of a sliding second-row seat.

Engines offered for the Yukon now include an optional turbodiesel 3.0-liter inline-six. Though output has not yet been released for the Yukon’s diesel engine, the same engine produces 277 horsepower and 460 lb-ft of torque in the 2020 Sierra 1500. Gas engines offered for the 2021 Yukon include the 5.3-liter V8 and optional 6.2-liter V8 (standard on the Denali), both with stop/start technology and revised dynamic fuel-management cylinder deactivation, which increases fuel economy. Output has not yet been announced for the 5.3-liter V8, but in the 2020 Yukon that engine produces 355 hp and 383 lb-ft of torque. GMC rates the 6.2-liter V8 at 420 hp and 460 lb-ft of torque.

All three engines are paired with a 10-speed automatic transmission, driving either the rear wheels (RWD) or all four (4WD). Shifting is controlled by a push-button gear selector on the dash. An optional electronic limited-slip differential is available to distribute torque evenly to the wheels. An optional two-speed transfer case is also offered.

All trim levels boast a brand new interior design, with the Denali featuring its own exclusive treatment including a new instrument panel, leather seats, and four unique color themes that each include real wood trim. The AT4 features its own exclusive seats with leather inserts. The SLT, Denali, and AT4 feature an innovative power-sliding center console that can move backward up to 10 inches to reveal hidden storage options. This also puts additional cup holders within reach of the second row.

Exterior treatments include liberal use of chrome on the Denali, including a larger and more detailed grille and optional 22-inch wheels. The Denali also receives LED lighting. The AT4 is the Denali’s opposite with body color and dark trim, underbody skid plates, and red recovery hooks. The AT4’s all-terrain tires are fitted to 20-inch wheels.

Automatic emergency braking is standard on all trim levels. An available 15-inch head-up display allows the driver to view speed, navigation, and multiple safety features without looking away from the road, while a newly available rear pedestrian alert notifies drivers of obstacles behind. Nine camera views are offered to improve driver visibility, including a surround view and GMC’s ProGrade trailering system, which allows drivers an unobstructed perspective around and behind the trailer. Other new optional trailering features include trailer tire pressure and temperature monitoring and a side-blind-zone alert.

The 2021 Yukon incorporates many features that may be new to the domestic full-size SUV market. But until its pricing is announced, the Yukon’s value relative to all luxury SUVs, including the Germans, is yet to be determined.

Have you driven a 2021 GMC Yukon?
Rank This Car

Enter your zip to see incentives for a new Yukon in your area.