Looking for a New Chevrolet Camaro in your area?

The Chevrolet Camaro faces stiff competition from the popular Ford Mustang and Dodge Challenger and fails to make a compelling argument for buyers to choose it over its rivals, unless you are a bowtie devotee. 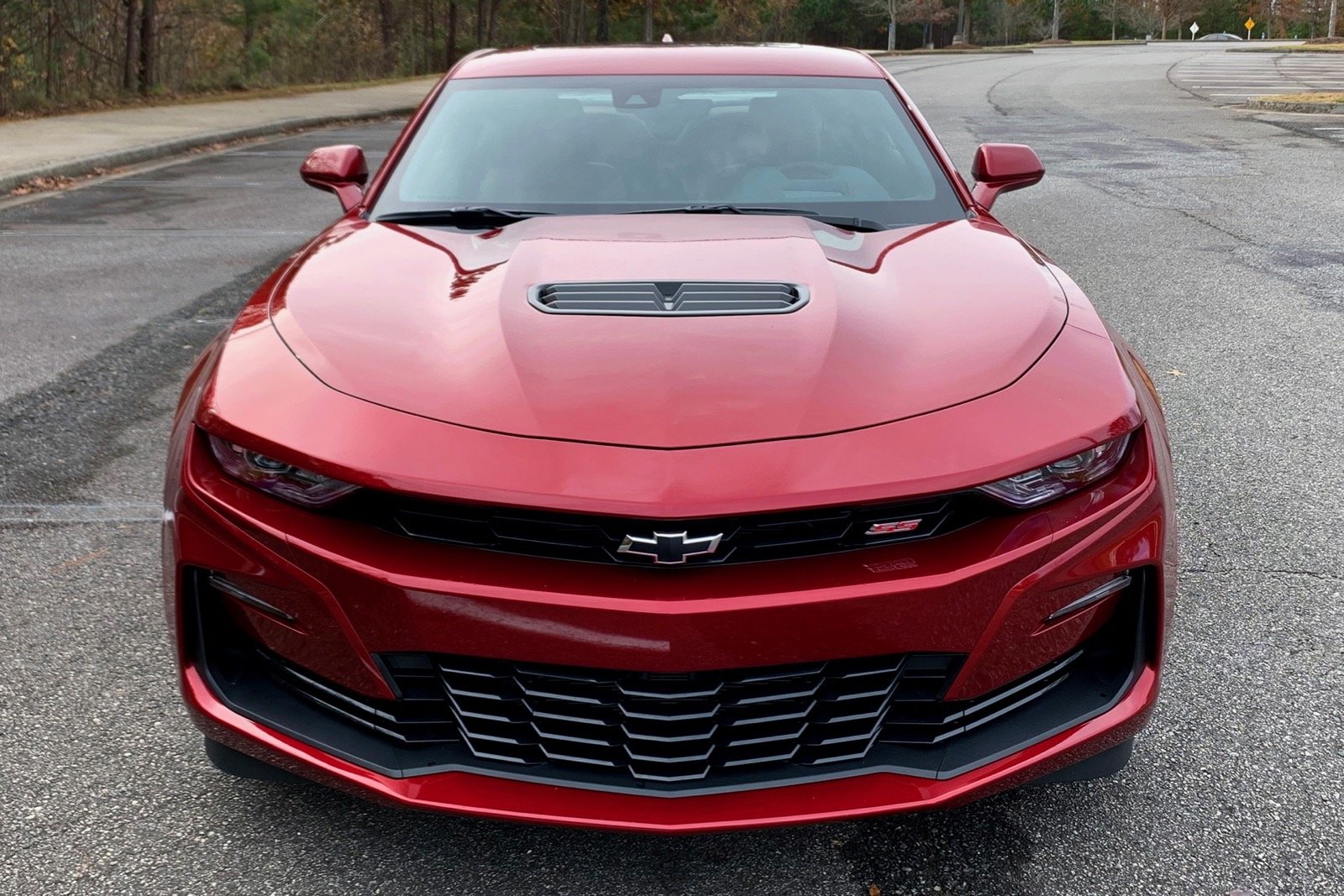 The 2021 Chevrolet Camaro is over 3,000 pounds of pure American muscle. It’s an iconic nameplate that hasn’t received many updates for the 2021 model year, continuing to deliver the power, handling, and style buyers expect. But, that doesn’t mean that it’s perfect. 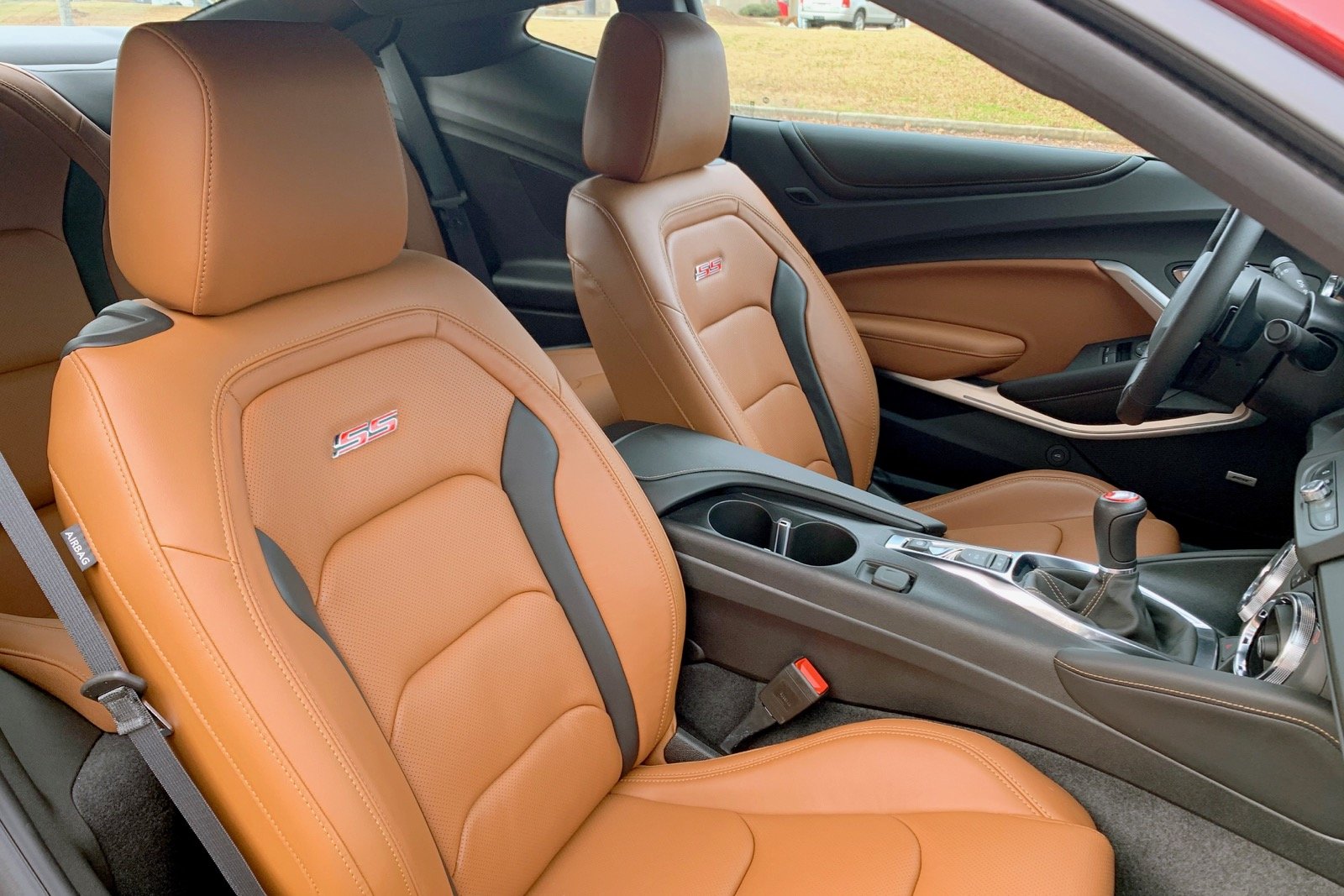 Buyers configuring their perfect Chevrolet Camaro have two significant options—body styles—to choose from right off the bat: coupe or convertible. The look of both is remarkably similar with the soft roof of the convertible simply taking the place of the traditional fixed roof of the coupe. With the top down, the car looks ready to tour classic American coastal landscapes at low speed. As a coupe, its looks are fierce.

Buyers can get the Camaro coupe and convertible in their choice of eight trim levels: 1LS, 1LT, 2LT, 3LT, LT1, 1SS, 2SS, and ZL1. The Camaro ZL1 is the car's most performance-focused variant, while the Camaro SS provides the best blend of daily-driver performance. The tester for this review was a 2021 Chevrolet Camaro 2SS Coupe.

The car rides on standard 18-inch silver-painted aluminum wheels wrapped in 245/50R18 all-season, blackwall tires. Up to 20-inch wheels are available and the Camaro can be had with summer tires. Wheel design is undoubtedly as subjective as it is functional, but even in the sporty 2SS variant, the polished silver design worked to age the car rather than make it look flashy or modern.

The interior of the Camaro is less appealing. The car’s 2019-model-year cabin refresh is holding up as stylish, but its design leads to some major functionality questions (more on that later). The screens, controls, and appointments all appear to be parts-bin specials, which is, for better or worse, a General Motors hallmark trait. The Camaro gets the easy-to-use vent design of the Chevy Blazer while other elements like silver finishers are more generic.

Chevy offers the Camaro with a variety of Wild Cherry design packs, the availability of which varies by trim level. The packs offer a variety of content including unique wheel and graphics designs, as well as ground effects, carbon fiber accents, and suede knee pads. 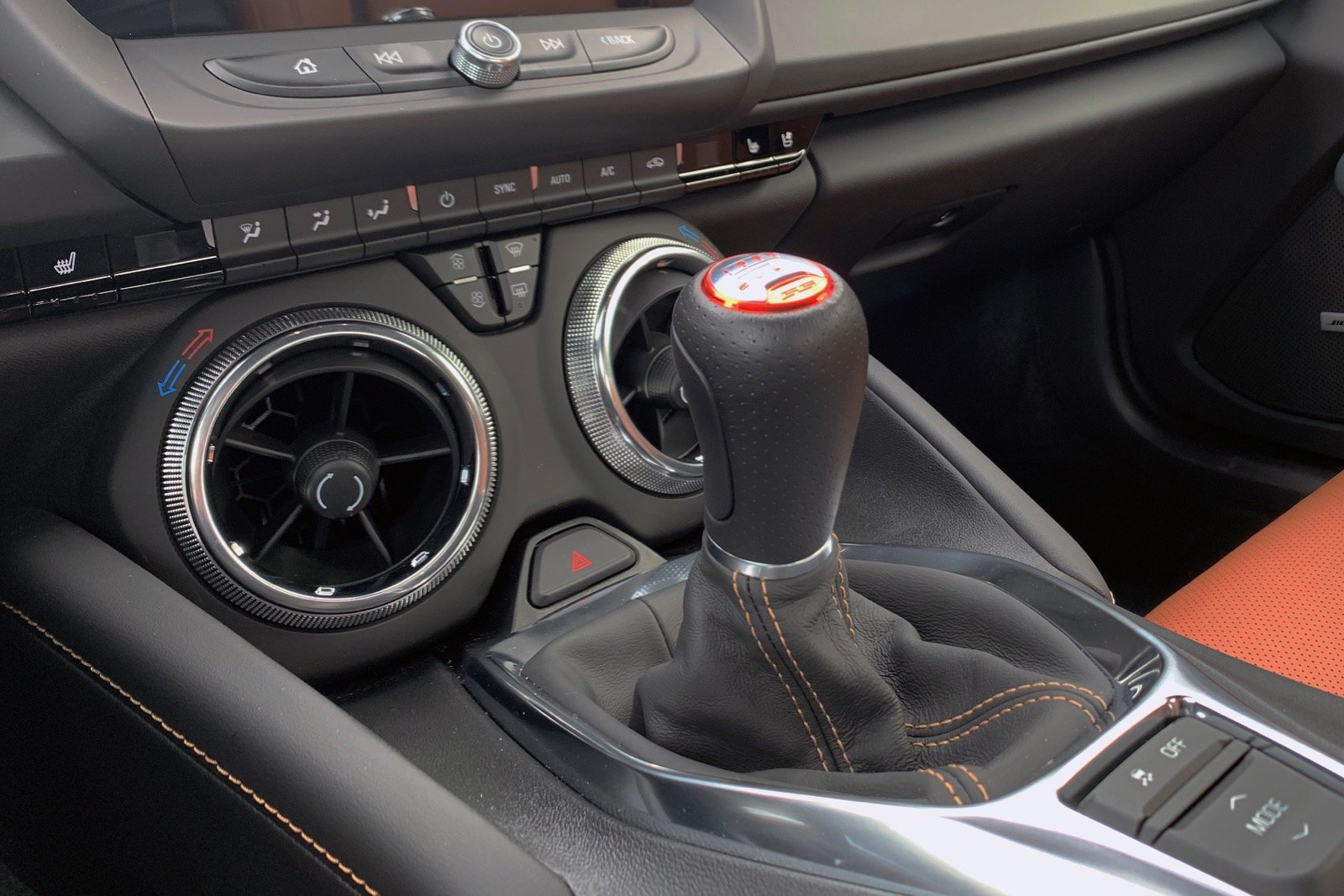 A turbocharged 2.0-liter four-cylinder engine is standard on the Chevy Camaro. It makes 275 horsepower and 295 pound-feet for torque and is paired with a six-speed manual transmission as standard.

Buyers can upgrade to the 3.6-liter V6 power plant, which makes 335 hp and 284 lb-ft of torque. Two more powerful V8 engines are also available. A 6.2-liter V8 churns out 455 hp and 455 lb-ft of torque, while a supercharged version of that engine goes even further delivering 650 hp and 650 lb-ft of torque.

As tested in the Camaro 2SS, the direct-injection, non-supercharged, V8 was plenty powerful and Brembo brakes provided adequate stopping power. It came equipped with the standard six-speed manual transmission that sucked every ounce of joy one can get from rowing through the gears out of the car. With long, narrow channels and an even longer stick, simply operating the car was a chore. Add to that the numb clutch and gas pedal and GM’s skip-shift technology, which requires the driver to skip gears to save on fuel, and the entire experience is enough to make you want to stop driving the car.

Buyers who opt for the six-speed in their Camaro 1LT, SS, and ZL1 get active rev-matching technology included. This tech stabilizes gear selections on the way back down. It is especially helpful in driving situations where you have to slow but not stop, such as where the person in front of you is moving into a turn lane, or when you’re traversing a rotary.

However, in this particular GM product, it takes away a big part of the reason why you opt for the manual to begin with. You simply shouldn’t be able to stay in sixth through a roundabout or drop below 1,000 rpm in a gear without serious feedback from the powertrain. Downshifting to gain more torque is a thrill and an exercise in the type of control buyers of this type of transmission crave so to have it mellowed by technology for perceived convenience and fuel efficiency is maddening.

The Camaro comes standard with rear-wheel drive; all-wheel drive is not available. With the manual transmission such high rpm is required to get the car moving that the inevitable rearward sway of the car off the line is more than the usual in a six-speed.

The manual transmission simply isn’t the way to go when Chevy’s impressive and smooth-shifting eight-speed and 10-speed automatics are available. If you want a car with the increasingly rare manual gearbox, you’ll want to seek out other, non-General Motors, purchasing opportunities.

Buyers are able to tailor their drive using the drive mode selector, which offers eight customizable attributes and up to four selectable drive modes: Tour, Sport, Snow/Ice, and Track. Track mode is exclusive to SS, ZL1, and models with the available 1LE Track Performance Package. 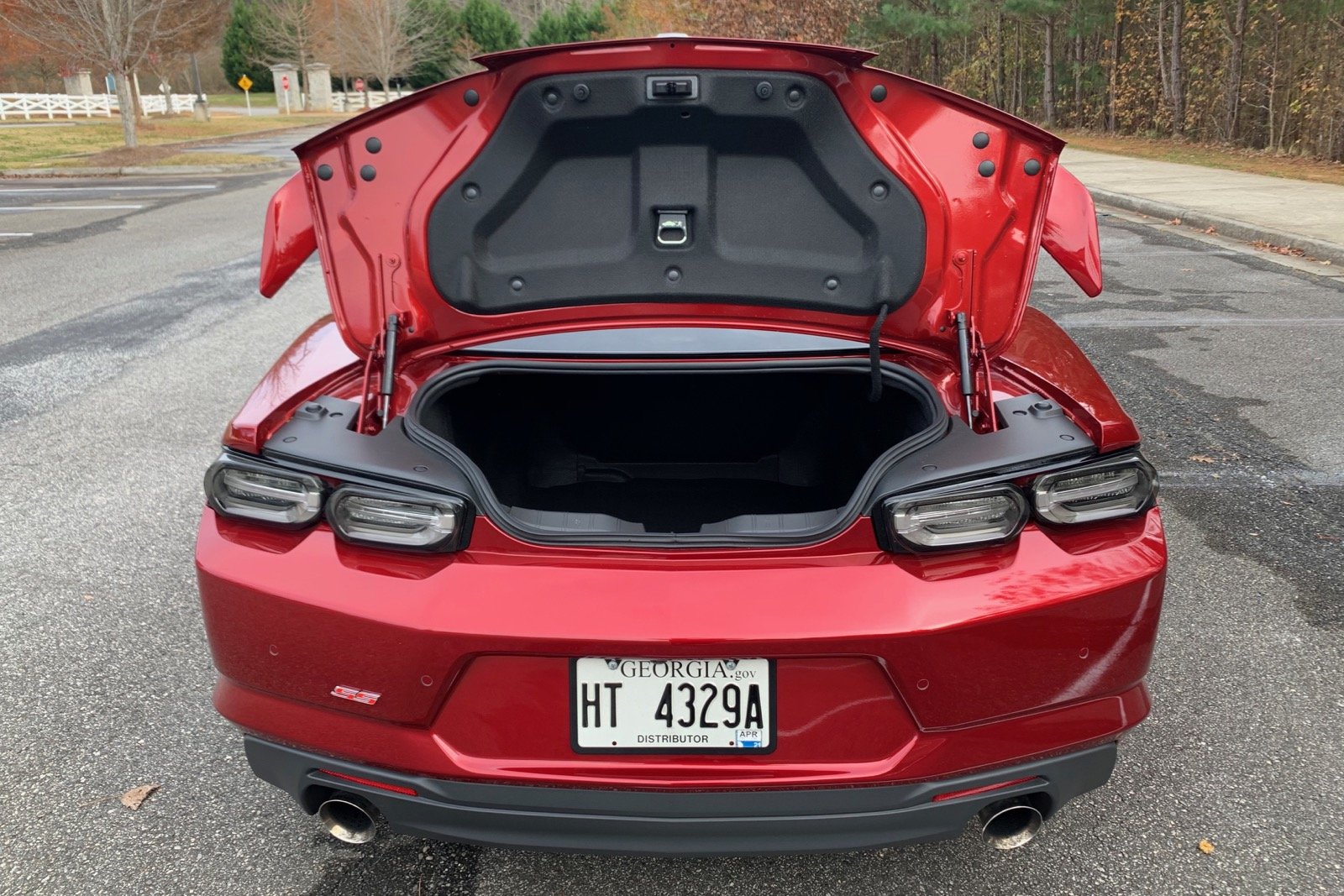 Cloth upholstery and front bucket seats are standard in the Camaro. Buyers get an eight-way power-adjustable driver’s seat, four-way manual front passenger seat with power recline, and a rear folding bench seat also as standard. The seats up front are relatively comfortable and not particularly sporty. Recaro sport seats are available. Leather upholstery, a heated steering wheel, a six-way power-adjustable passenger seat, and heated and ventilated front seats are available. The heated seat works particularly well with more than the usual amount of seatback coverage.

The position of the front seats would be conducive to good visibility—if the windscreen allowed it. It does not. While the narrow glass limits outward visibility, the issue is made worse by the oversized hood over the instrument cluster that takes away much of the driver's forward view.

There’s no point in pretending that the rear seats are for adults to sit in. Perhaps a child in a car seat could be comfortable but that’s with the caveat that the driver needs to be on the short side so that they don’t end up with feet kicking the back of their seat at all times.

The car’s leather-wrapped, flat-bottom steering wheel feels good in the hands and isn’t as bulky as Dodge’s SRT wheel. The steering column’s manual tilting and telescoping capability add to its appeal.

Single-zone climate control is standard and dual-zone is available in higher trim levels. The Camaro’s in-cabin real estate and seating positions are conducive to a pleasing climate control system experience. Even with the optional dual-zone controls, there’s a ton of bleed-over and the design of the vents makes closing them and aiming them away from the body a challenge.

The position of the two front cupholders in the center console is good for Camaros with an automatic transmission. Those driving the six-speed version will find that having drinks in the cupholders makes it nearly impossible to shift with any sort of ease, rendering the forward-most holder completely unusable and the rear one mildly in the way.

Though the car has a good amount of trunk space compared to other muscle cars, its high load height and narrow opening severely limit usability. Above the trunk, the car’s tiny back window requires a driver to rely solely on a rearview camera when backing up. Opting for the Camaro convertible gives owners about 20% less cargo space than the coupe model. 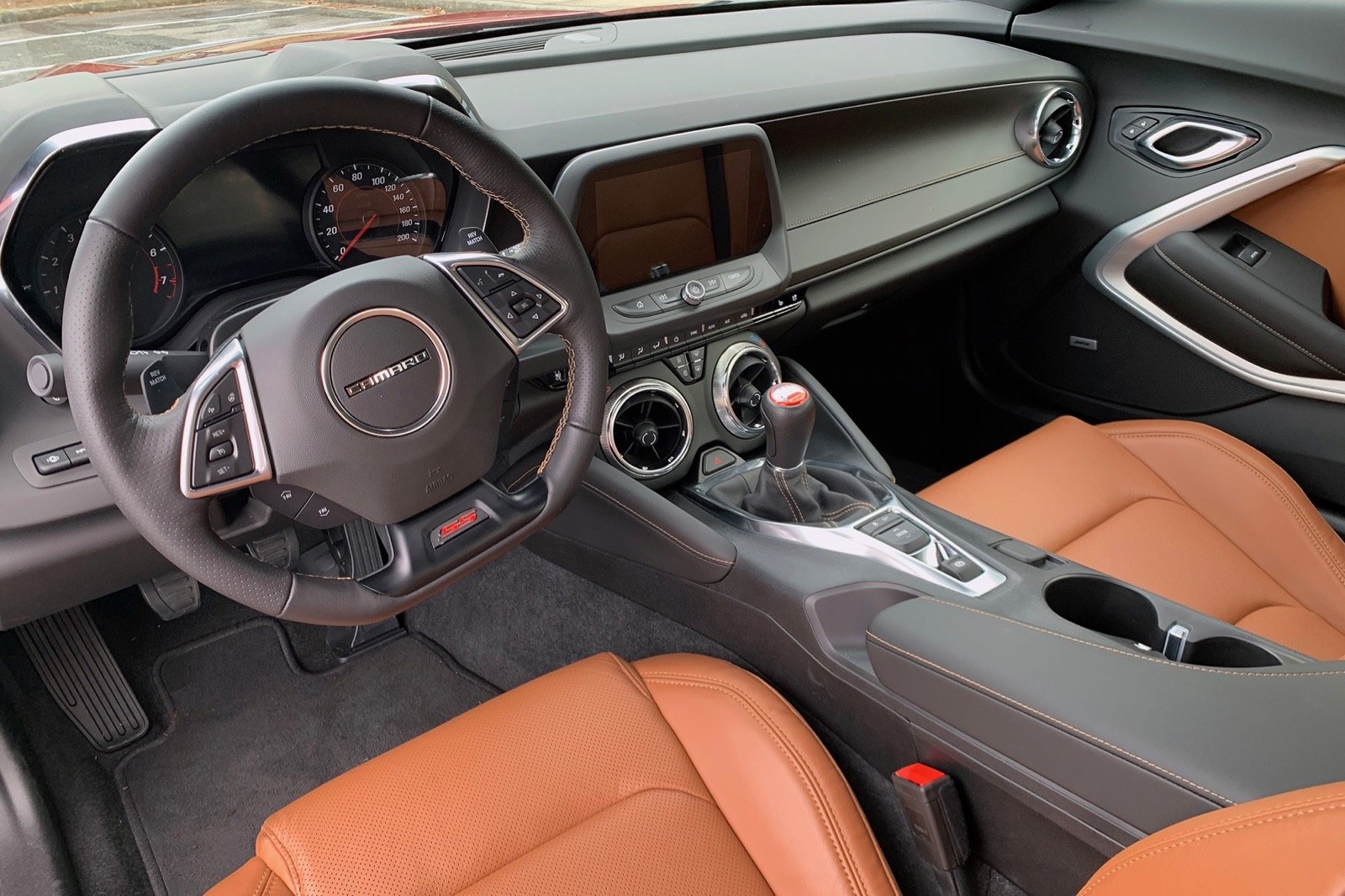 The sports car’s driver-information center displays all the requisite information in typical GM fashion. It’s functional and relatively straightforward in its operation proving that at least here, and with the infotainment touchscreen, once you’ve used them in one GM product, you know how to use them in all GM products.

Both the driver information screen and infotainment touchscreen suffer from a forward lean that is puzzling, to say the least. Whether GM’s design team was unable or unwilling to prevent glare in any other way should be seen as a major misstep. The overall aesthetic of the styling is incredibly awkward. However, both screens are perfectly functional.

Also functional are the USB ports, which are hidden in the center console, and the wireless charging pad, which protrudes into the rear seat space solidly and awkwardly just beyond the reach of the driver behind the center console. 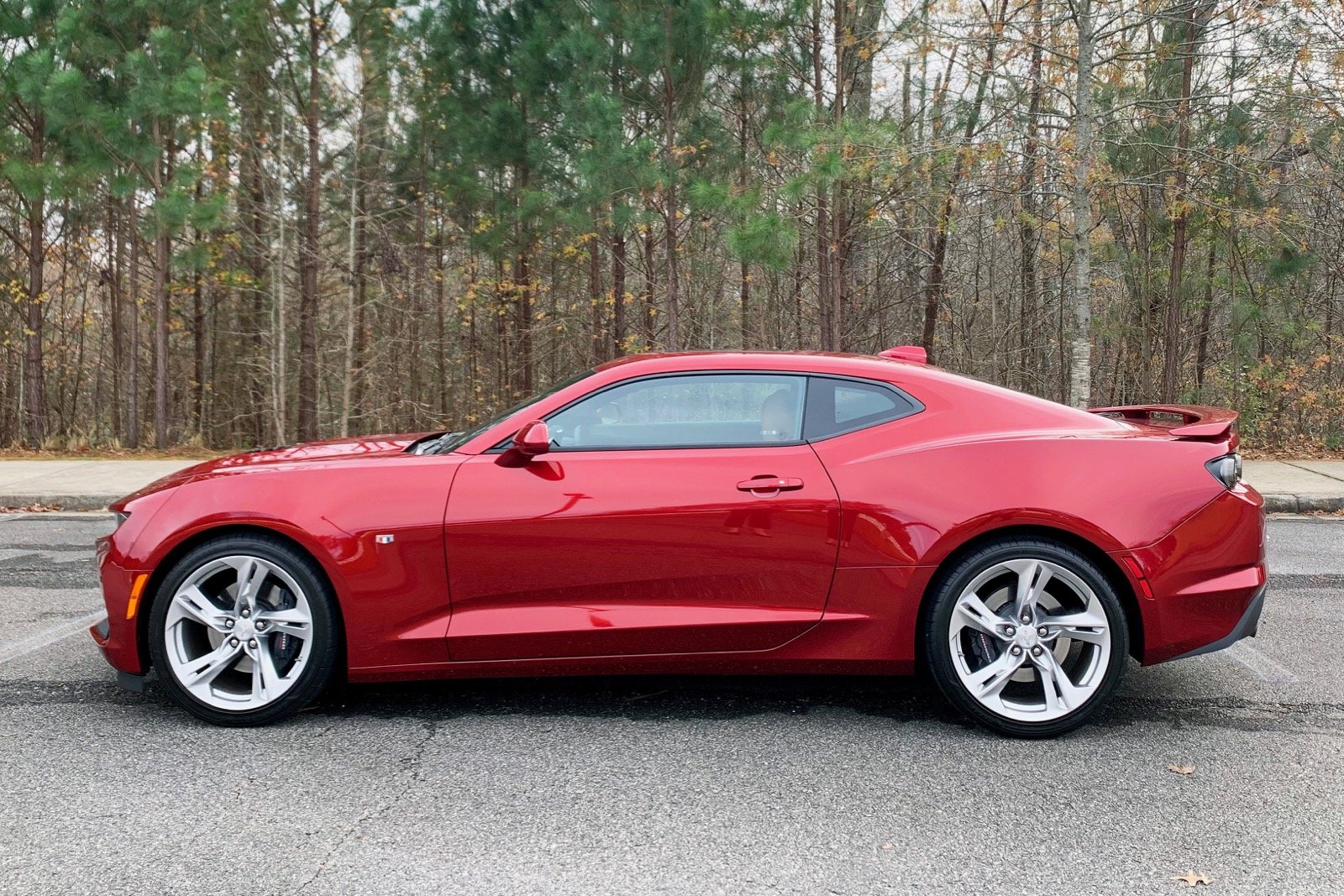 The safety ratings for the Chevrolet Camaro are a bit disappointing for a newer car (it was last redesigned for the 2016 model year). The Insurance Institute for Highway Safety (IIHS) gave the Chevy a mix of "Good," "Acceptable," and "Basic" ratings while the National Highway Traffic Safety Administration (NHTSA) scores the car with five-star and four-star ratings (out of a possible five stars). These ratings are similar to the Dodge Challenger, which is much older than the Camaro. 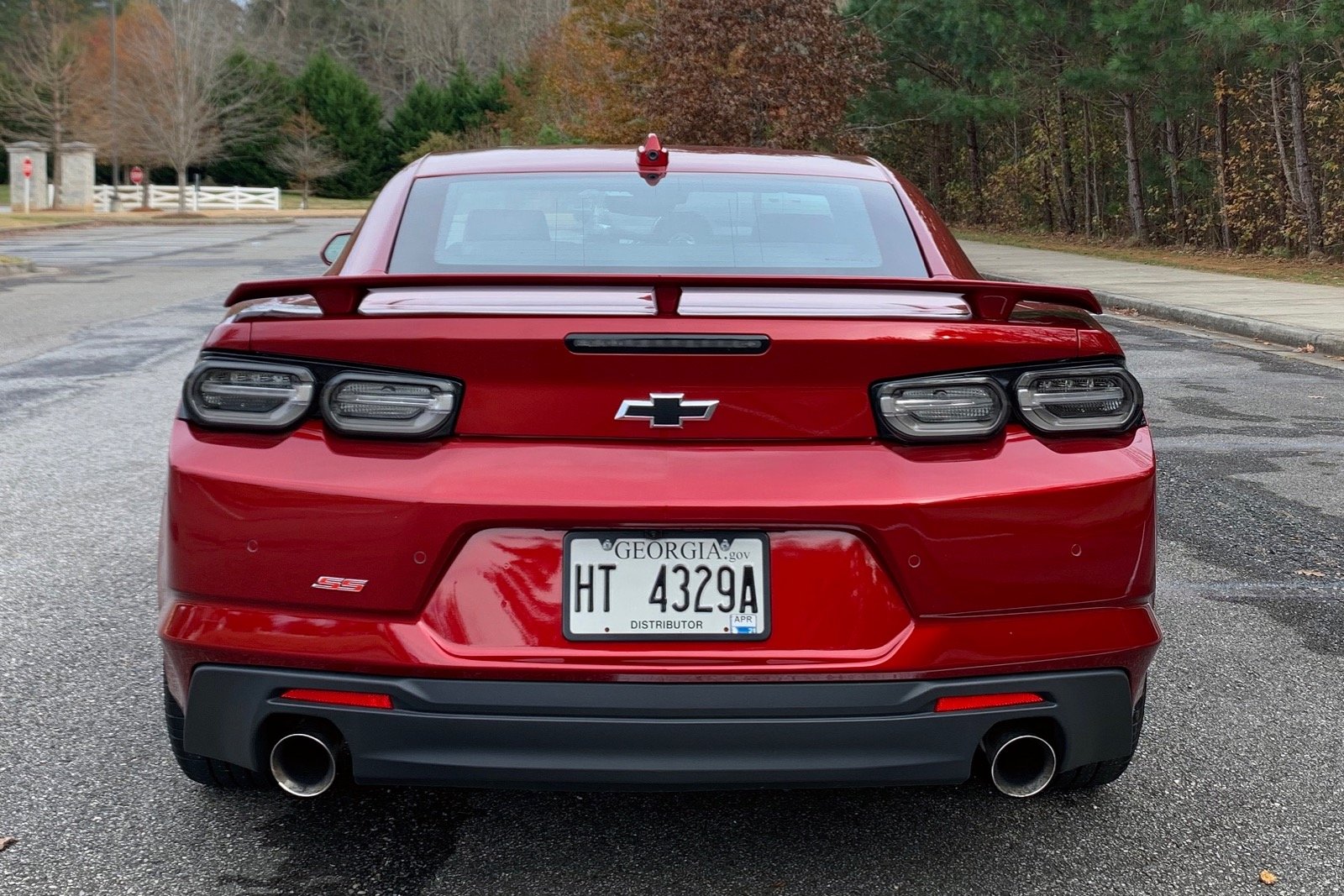 The 2021 Chevrolet Camaro coupe starts at $25,995. The Camaro convertible has a starting MSRP that is significantly higher—$32,495. This isn’t unusual. Convertibles require additional structural elements hidden from the untrained eye that work to keep the car safe despite its rooflessness—helping to drive up the cost.

Pricing for the Camaro feels right and there are certainly plenty of options to choose from. Each of the car’s seven trim levels is available with multiple powertrain options which gradually step the price of the car up. With a price range topping out around $70,000 with all the options boxes checked, there is plenty to choose from.

The Camaro naturally competes against the Ford Mustang and Dodge Challenger. The Mustang has a better manual transmission option and more powerful engines (though more limited in choices) while the Challenger has gobs of cabin space—including a spacious back seat, a giant trunk—and Hellcat performance variants with up to 797 hp. Performance enthusiasts will want to go with the Ford over the Chevrolet while buyers that need more sensible cabin and cargo space will want to choose the Dodge.

What's your take on the 2021 Chevrolet Camaro?

Have you driven a 2021 Chevrolet Camaro?
Rank This Car

Enter your zip to see incentives for a new Camaro in your area.

My Camaro has Goodyear Eagle F1 Summer only Run-Flats. The tires have about 900 miles on them. They have close to zero grip. Is this typical?

14 views with 5 answers (last answer about a month ago)

Delivery Of New Vehicle To Another State?

Which Model Camaro Is It Really?