Looking for a New Cadillac XT5 in your area?

The Cadillac XT5 is more finely appointed than ever before and now has a roster of available high-tech features. 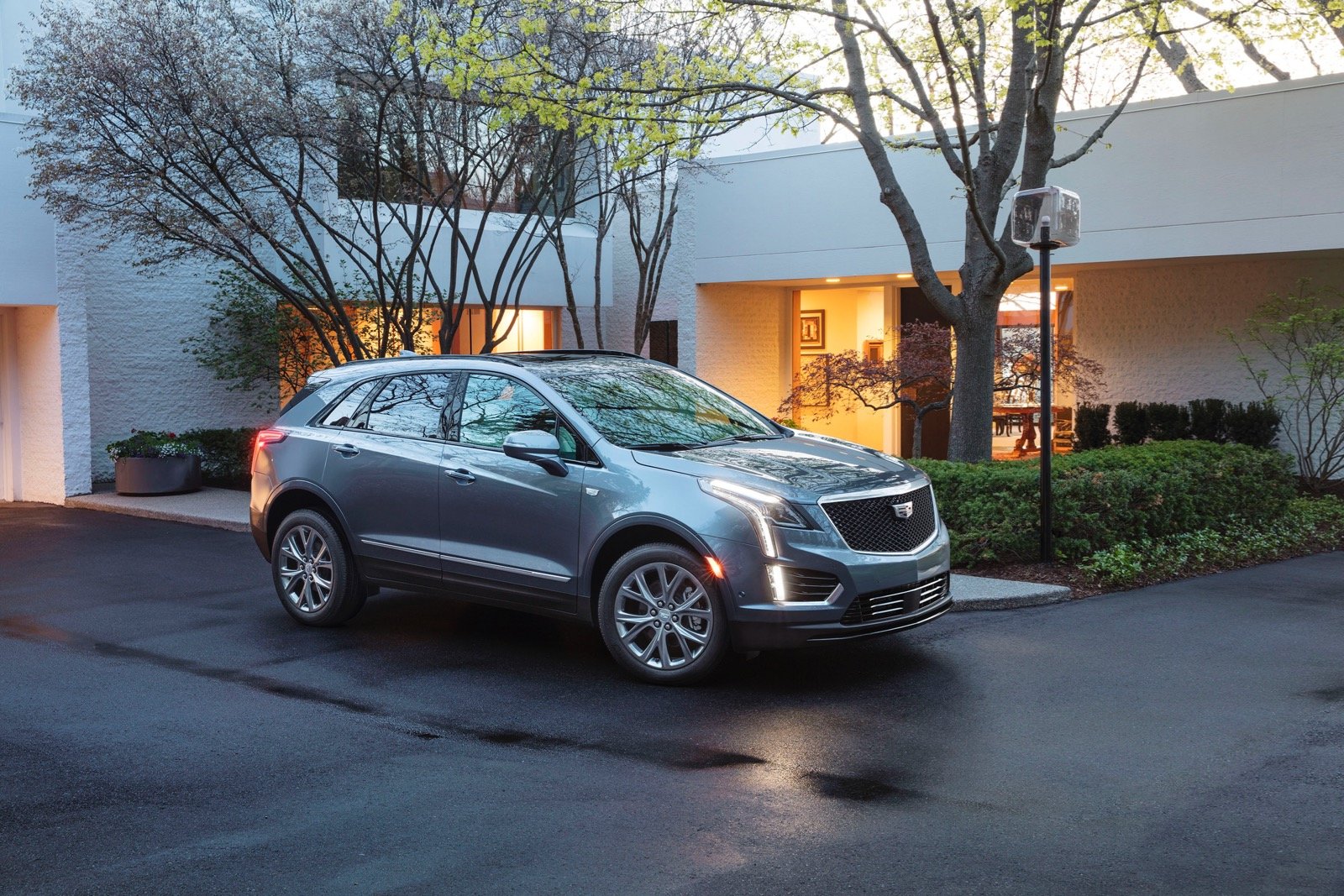 Cadillac’s compact SUV checks many boxes for premium vehicle buyers but can get pricey, firmly topping out in luxury territory without offering the performance competitors’ products do. The well-mannered SUV continues to show why it’s Cadillac’s perennial best-seller as it sits in the middle of the lineup between the smaller subcompact XT4 and larger midsize Cadillac XT6. 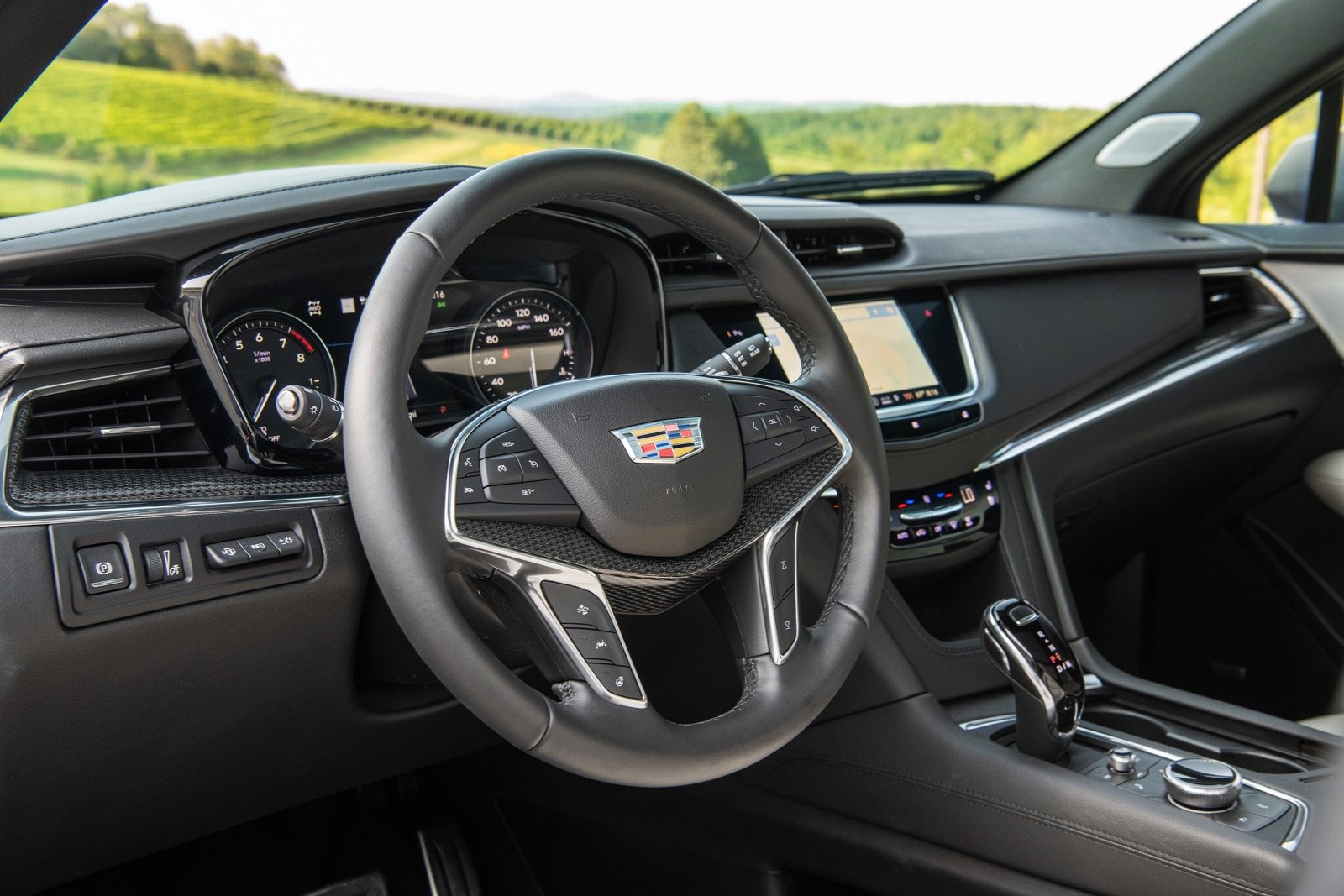 Cadillacs used to be the most refined vehicles in the General Motors lineup. Then, they weren’t. The brand has been busy reversing that trend in recent years, with the results perhaps most apparent in the XT5.

Cadillac updated the XT5 for the 2020 model year, giving it 40 upgrades including a new engine option, revised styling, and enhanced technology. The exterior of the SUV got more snub-nosed, with additional differentiation between the trim levels thanks to a fresh features list. Those changes carry over to the 2021 model.

Standard LED lights at the face and back show the corners of the Cadillac with slimline detail highlighting the XT5’s beefy proportions up front and giving way to a stylish and sophisticated posterior that is in line with the styling of its XT-named stablemates. Twenty-inch wheels are standard.

Luxury vehicles offer supple leather seating, a variety of appointments made of natural materials, and a chic design. The 2021 Cadillac XT5 has some of that, but not all. More importantly, its interior design and styling are more upscale than its sister vehicle in the General Motors lineup, the Chevrolet Blazer.

Sweeping horizontal design lines and simple forms cut away the busyness of traditional upscale GM design in favor of straightforward materials positioned in thoughtful ways throughout the cabin.

As tested in the Premium Luxury trim level, the XT5 exudes more elegance than any other Cadillac aside from the Escalade. Its cut and sewn leather, and natural wood and carbon fiber accents exude the level of finery Cadillac shoppers have been unable to find for much of the last decade.

Both engines are paired with a nine-speed automatic transmission. As tested with the available V6, the transmission was smooth when upshifting but was clunkier when downshifting. When switching to the available Sport drive mode, the shifts were more jittery going up and down.

The throttle response of the Cadillac XT5 Premium Luxury is immediate with the V6 but the luxury crossover could benefit from additional low-end torque, which would inspire more confidence when getting off the line or accelerating at speed.

Unlike the Cadillacs of a half-decade ago, the engine start-stop technology in the XT5 is rather seamless, except when it comes to the heating and air conditioning, which automatically shut down when the stop part of the functionality is engaged. In the hot summer sun, this is a brutal consequence that can thankfully be mitigated by pressing the function’s button to turn it off.

Front-wheel drive (FWD) is standard in the Luxury and Premium Luxury grades, and all-wheel drive (AWD) is available. The XT5 Sport comes standard with AWD.

During 2,000 miles of test driving, the XT5 AWD achieved about 25 mpg in a variety of driving conditions and on a number of different types of roadways. This was far better than the EPA-estimated 21 mpg combined fuel economy that was expected out of the V6 power plant. Non-AWD versions of the V6 are estimated to achieve 24 mpg combined.

The base engine gets 23 mpg combined when equipped with FWD and 21 mpg with AWD.

The XT5 handles the road with ease. 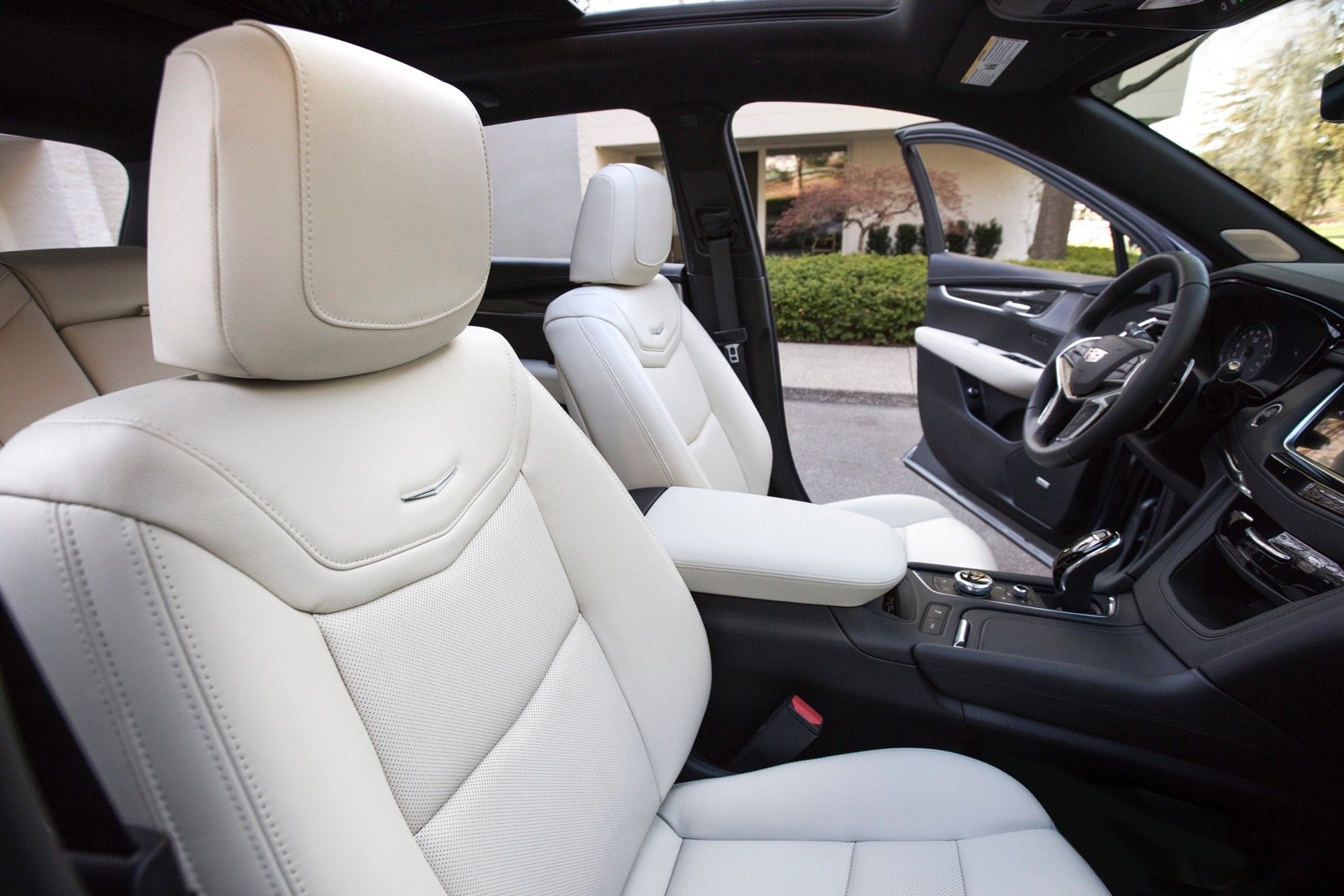 The SUV has enough room for four adults to be seated in two rows despite technically fitting five thanks to a three-seat bench in the second row. The back seat leaves little headroom for tall occupants, but legroom is good in both rows. The front seats are not as comfortable as they look during extended road trips thanks to a hard bottom cushion.

Heated front seats are standard. When turning on the SUV, depending on the climate inside the car and if included on the model, either heated or ventilated seats are activated to aid in achieving the ideal temperature.

Cadillac has given the XT5 a reasonable amount of cargo space for its size—30 cubic feet. Though it has significantly less space for luggage and groceries than the Nissan Murano and Lincoln Nautilus, the XT5 benefits from a deep rear cargo area. However, that space is hampered by wheel bump-outs that minimize the width of the area by several inches on each side.

The SUV’s cargo-management system allows for dividing and securing cargo that may otherwise be loose in the rear such as boxes and groceries. It conveniently locks into place. A hands-free programmable height liftgate is available.

There’s a limited amount of small-item storage in the car. Up front, there’s no good place for a smartphone that keeps it within eyesight whether you’re the driver or the passenger. A small cubby below the climate controls is good enough to fit the car key or a tollway ticket, but not much more. The door handles have no bottom on them so items slip through. Map pockets are small and often not big enough for anything larger than the slimmest water bottle. 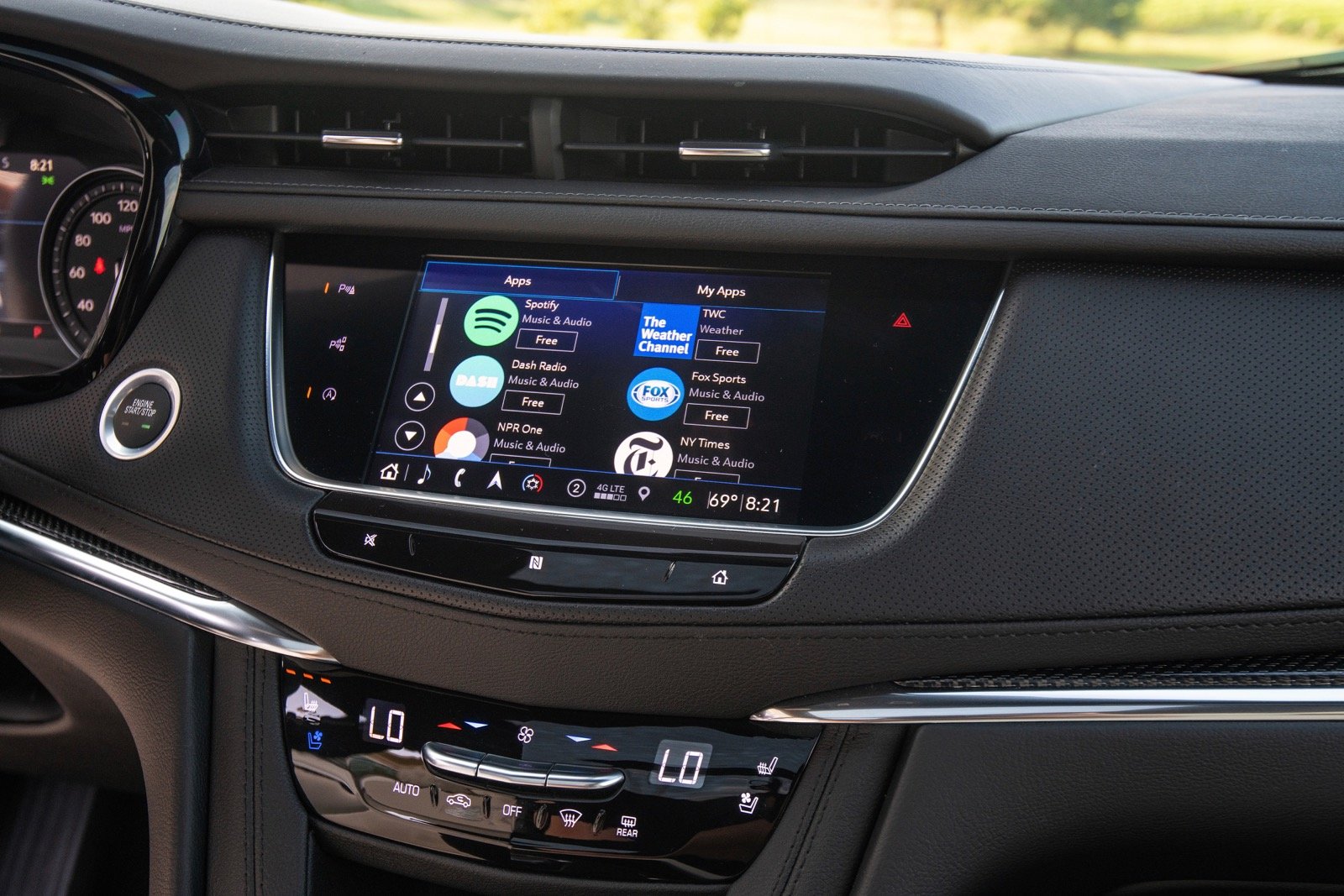 Cadillac has streamlined the look of the car’s infotainment system and center stack, which help give it an elegant design aesthetic. The car’s climate control system is housed inside Piano Black plastic that provides haptic feedback via hidden-button functionality.

A heated steering wheel and heated outboard rear seats are available. The rear seats feature 60/40 split-folding capability and are able to slide and recline.

The Piano Black surround of the SUV’s standard 8-inch infotainment touchscreen houses numerous functionalities that remove buttons from their traditional location on the dashboard and center console including the automatic start-stop engine on/off switch.

To aid in infotainment system functionality, Cadillac equipped the XT5 with a rotary controller on the center console that moves a selector on the screen. When using the dial, boxes surround selected areas of the screen crowding the aesthetics of an otherwise perfectly functional system.

It’s worth noting that using the smartphone recharging pocket requires the phone to be kept out of sight.

A rear camera mirror is also available for the XT5. The tester came equipped with one and, like others tested before it, the equipment proved most useful during nighttime driving, mitigating the shine of headlamps, but was a distraction during daytime driving. Toggling a switch on the rearview mirror easily changes the screen to a traditional mirror.

In front of the driver is a fully-digital instrument cluster that provides the requisite vehicle information needed. Its functional design won’t knock your socks off but it gets the job done.

A head-up display (HUD) is available on the XT5 and gives drivers the usual information about speed and cruise control settings.

Both the cluster and the infotainment screen are able to deeply darken at night allowing for a much more pleasant and less distracting driving experience. 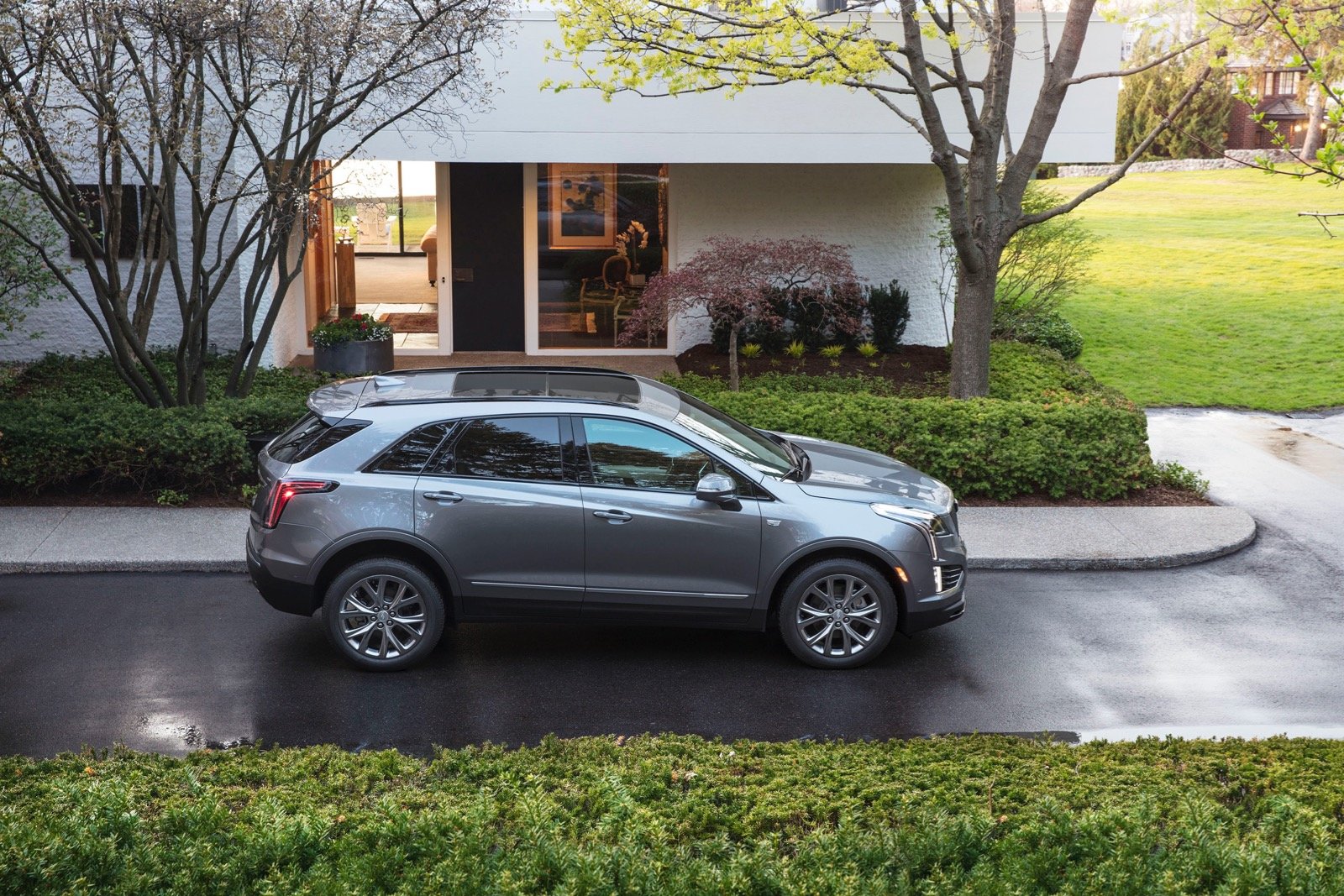 The XT5’s safety technology isn’t the nanny-keeping system of its German rivals. The roster of safety features includes front automatic emergency braking, forward-collision warning, rear cross-traffic alert, and lane-change alert with side blind-zone alert, offering a sufficient level of alert capability while not invading the necessary functions of a drive. Not all technologies are available in all trim levels. Rear-seat reminder and a federally-mandated rearview camera are standard.

Cadillac’s available Night Vision technology enhances the car’s nighttime drivability, allowing large wildlife and hazards to be clearly seen at a distance in the dark before headlights would traditionally shine upon them. Unfortunately for the raccoon who decided to cross the highway in front of the SUV during the week-long test, the system also illuminates up-close objects well, even though the driver may not have enough time to react to avoid the obstacle.

The Night Vision system can also be employed in foggy nighttime driving situations with brilliant results.

General Motors’ Teen Driver software is also standard on the SUV and allows parents to limit certain vehicle features for a driver. It also allows the owner to see a report card of vehicle driving habits.

No matter what their marketing team says, the Cadillac XT5 isn’t a luxury SUV. However, it is a premium SUV meaning that its closest rivals are from Acura, Lexus, and Infiniti, rather than Mercedes-Benz, Audi, and BMW. When compared to the Acura RDX, Lexus RX 350, and Infiniti QX50, the XT5 is quite competitive.

Like those three models, it comes in a limited number of trim levels and includes much of the latest safety technology. However, it doesn’t have the advanced driver-assist features you’ll find in true luxury models nor the roster of over-the-top features. It also lacks Cadillac’s Super Cruise technology.

As tested, the mid-grade 2021 Cadillac XT5 has a standard starting price of $48,795, which is competitive. General Motors added on a number of packages to the tester, driving up the cost. The Platinum Package ($4,850) gives the model the refinement that drives the car to luxe levels: semi-aniline leather seating, leather-wrapped console and door trim, microfiber suede headliner, premium carpeted floor mats, real-time damping performance, and illuminated door sills.

Twenty-inch split six-spoke wheels add $1,700 to the vehicle and a Garnet Metallic paint job was another $625.

Bose Performance audio and a navigation system add $1,025 to the SUV as part of a bundle. The upgraded V6 powertrain is the final option box the tester checked, adding $1,000.

Cadillac charges an additional $995 for delivery, bringing the total cost of the XT5 as tested to $65,765.

The RDX is priced far lower than the XT5, both at the base model and when fully kitted out. The QX50 is more in line with the XT5, but its infotainment system and center console/center stack styling lack the sophistication of the XT5.

The XT5 is at least as nice as the similarly priced Lexus RX 350 though the RX 350 F Sport is cheaper than the XT5 Sport.

The Cadillac XT5 is much improved and delivers a lot of what empty nester buyers are looking for. With its recently-found elegance, premium appointments, and solid engine, the XT5 makes a compelling argument to be a model you test drive during your next visit to a dealership looking for a new car.

Have you driven a 2021 Cadillac XT5?
Rank This Car

Enter your zip to see incentives for a new XT5 in your area.

Looking for a Used XT5 in your area?