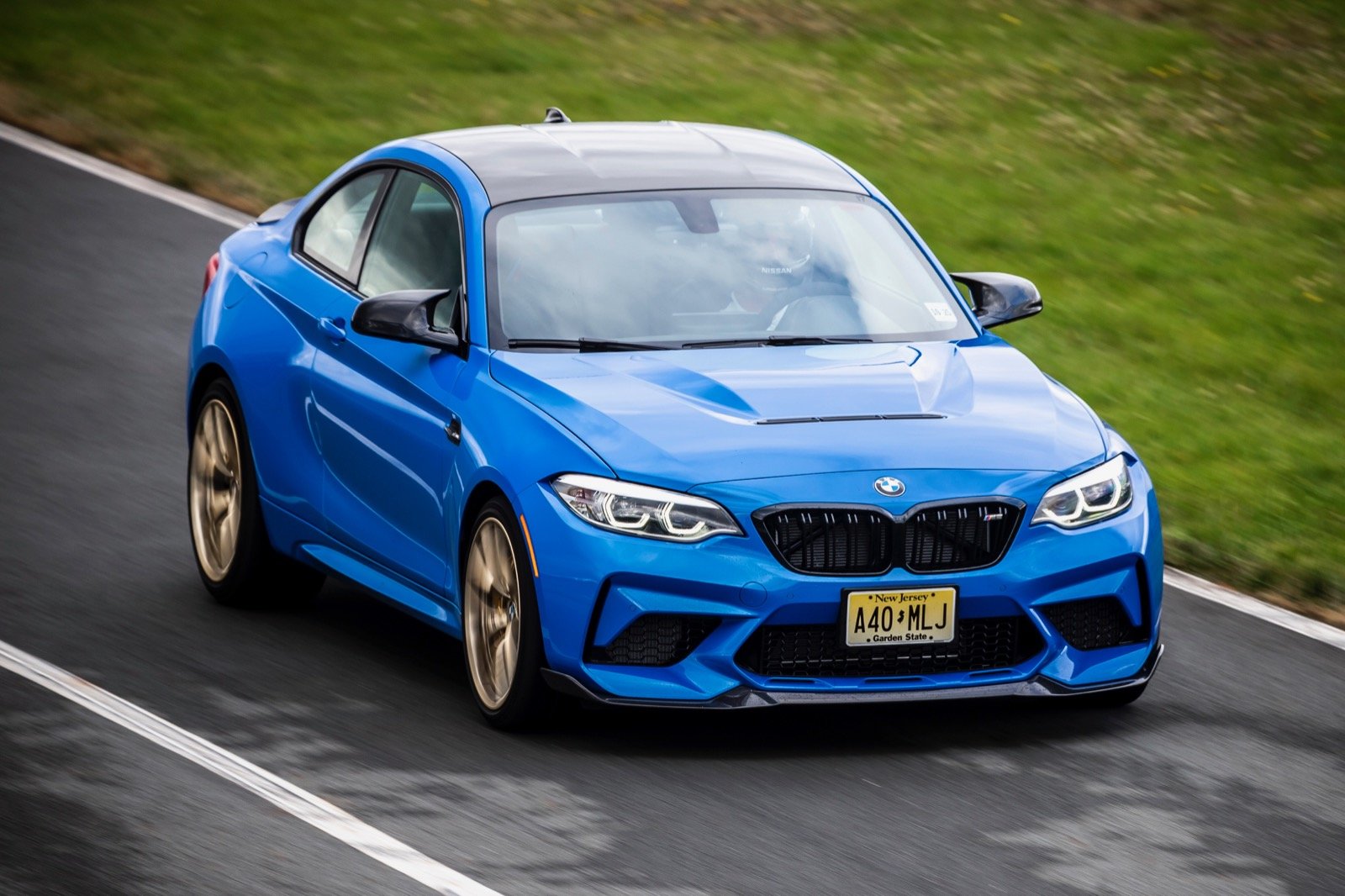 Buying a BMW M2 means you like driving by yourself. It's loud, cramped, and as uninviting to new guests as a mean housecat. BMW fans know why the M2's big engine and small footprint make it the most thrilling new BMW in ages. Everyone else doesn't want a coupe that costs as much as the mid-engine 2020 Chevrolet Corvette and looks like a cheap rental on oversize wheels. That's been clear since its 2016-model-year debut, and despite some upgrades, BMW doesn't market the M2 to anyone outside the BMW fold. That is why the 2021 BMW M2 Competition now costs upwards of $60,000, an absurd ask against so many prettier sports cars and sedans. But the M2 is everything BMW, polished to a mechanical perfection unlike very few of those other cars. We discovered this early on, after taking the first M2 to a race track. Now, after lapping last year's M2 CS at Monticello Motor Club, we've seen how perfect the M2 can be. 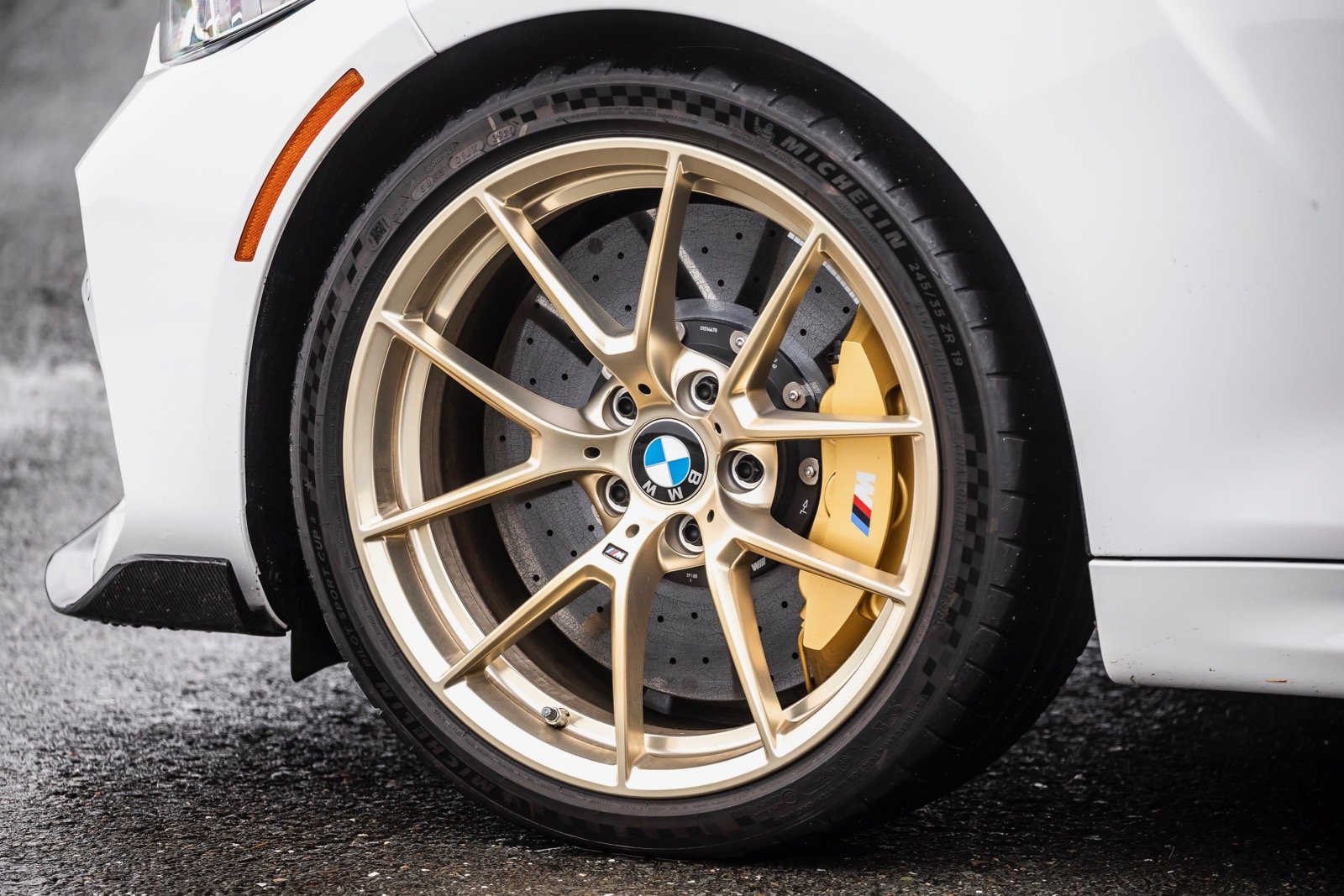 The M2, as the most expensive version of an inexpensive subcompact car, is one of the most unimpressive cars to see or sit inside. It's stubby, with a short wheelbase and the half-grown proportions of a tween human. The front is amazing and pure BMW, with blacked-out kidney grilles, distinct quad headlights, and huge air scoops slicing through the chiseled bumper. The sharp wingtips on the side mirrors add to the M2's menacing impression, especially when you see an M2 filling your own mirrors. And there is something hot about a souped-up little car that's slammed to its tires, rocking fat exhaust tips and massive brakes. It's a bulldog of a car.

But then again, lots of high-performance, small-production models like the (now-defunct) Ford Focus RS get away with this boy-racer look for a lot less money. For $58,900 and up, the M2 is all muscle and no beauty. On the CS, which was a limited-series trim only for 2020, the hood flexes to accommodate an air vent. There are more black parts, like the chin spoiler, mirrors, trunk-lid spoiler, rear diffuser, and roof—all made from carbon fiber, including the hood. In the new Misano Blue Metallic and matte gold wheels, the M2 CS is high on its Subaru STI game—and that's not a fashion compliment.

The M2's interior, already a stark and ultra-basic affair, is worse on the CS. Microfiber is pleasing to the touch and great for wicking sweat, but this material in any car looks like a dirty carpet. It's best used sparingly, and the M2 spreads it everywhere: the steering wheel, dash, center console, and doors. The smattering of glossy carbon fiber trim, glossy black plastic, and matte black plastic shows how the M2 was cobbled together using different parts. The regular 2 Series was never designed to showcase the high-end materials and switchgear that would suffice the M2's price. The 2021 M2 Competition offers blue or orange accents on the seats and matching contrast stitching, but else, it's a dark and dank affair in this car. It's also much older than most new BMWs. Take one look at the interiors in a Z4 or 4 Series coupe, and you'll immediately recognize the M2's lack of craftsmanship.

The best that can be said about the M2's design is that it's simple and straightforward, designed solely for the task of driving with the most minimum of comforts. 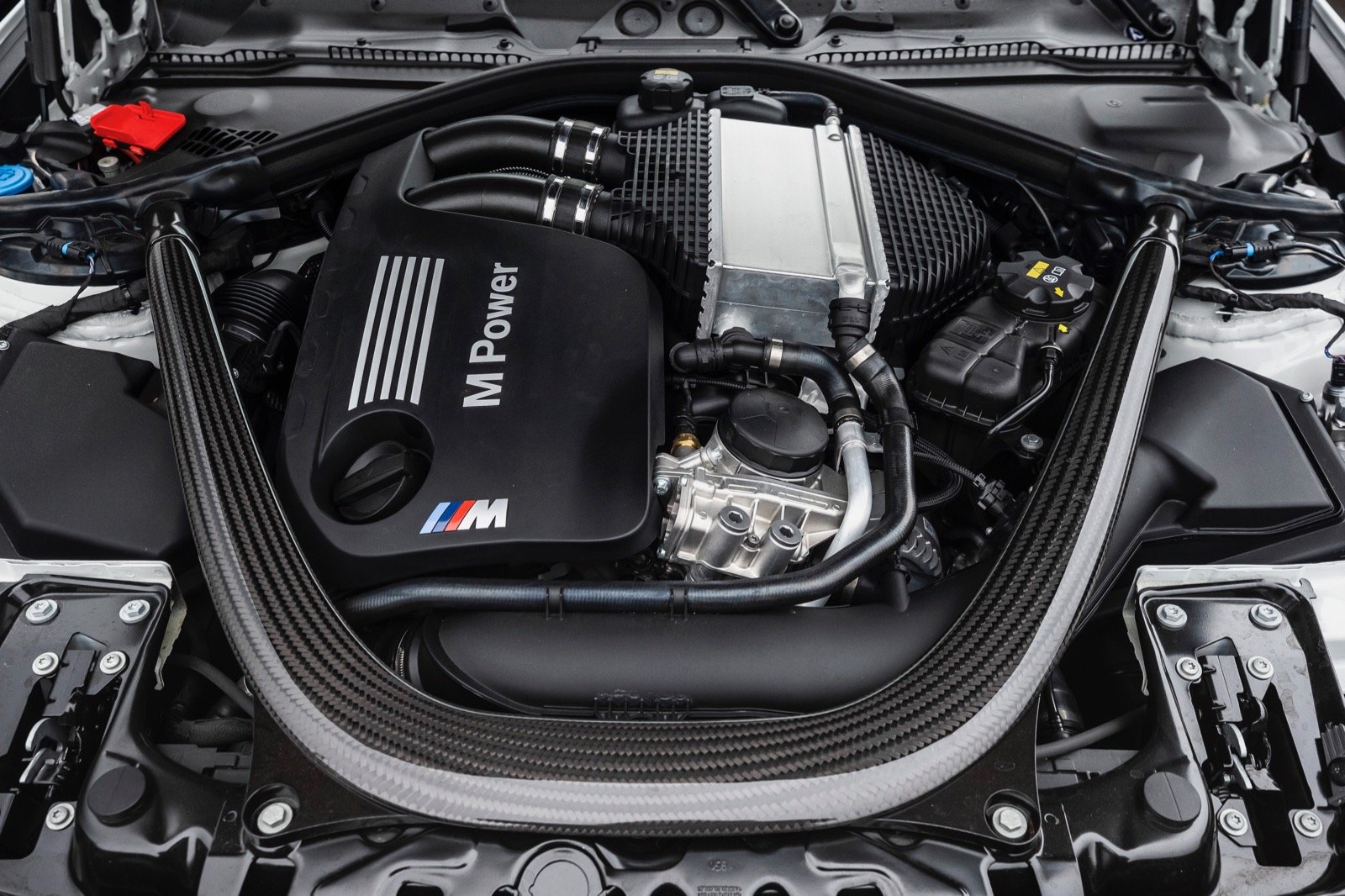 Larry David, while driving a white 4 Series coupe on Curb Your Enthusiasm, said he doesn't know what his car looks like when he's driving. That's the very idea behind the M2. It's one of the best tools in the business to drive fast and look like a pro. As it did in 2020, the 2021 M2 carries over the nearly-brand-new engine introduced for 2019, a 3.0-liter twin-turbo inline-six borrowed from the M3 and M4. It's an entirely different design from the same-sized, lesser-output engine in the 2016-2018 models, with a dry-sump oil pump and additional radiators that keep it from overheating during extensive track use. The twin-turbocharged engine makes 405 horsepower and 406 lb-ft of torque, routed through rear-wheel drive (RWD), with an electronic locking rear differential that can prevent the onset of wheelspin within 150 milliseconds. The 2020 M2 CS cranks the ponies higher, to 444 hp.

An active limited-slip differential is critical with so much power flooding the back end in a short-wheelbase car. Without so many sensors monitoring steering angle, brake pressure, wheel speed, and yaw, the M2 would roast its tires and rotate about itself just as quickly (and believe us, it did when the stability control was switched to M Dynamic Mode, which lets the driver have more sideways fun).

Unlike our last time with an M2 on a track, we tested the M2 CS with the seven-speed dual-clutch automatic transmission versus the standard six-speed manual. On the track, the automatic is the superior choice. In its most aggressive mode, gear changes are lightning quick and change up only when your foot is completely down to the floor. During hard braking, rev-matched downshifts ensure a smooth corner entry. Only in one uphill esse did the transmission stay in too high of a gear for the corner's recommended speed—and in that case, when you're that experienced on a certain track, selecting manual mode is a sure bet. The real manual is more fun on the street and offers the same rev-matched downshifts, so you're never disrupting the chassis. If you're not tracking an M2, don't order the automatic. You'll be more engaged and appreciate the powertrain's sonorous music—and its sharp crackles if you order the M Performance Exhaust—by shifting yourself.

As with most M models, BMW lets the driver configure the throttle, transmission, steering, and suspension independently of one another. That means if you're driving in Sport mode, the car will accelerate more aggressively but may shift lazier and apply more power steering assist—helpful when you just want to have fun and not race. Because of the dizzying amount of possibilities this invites, BMW usually puts two red toggle presets on the steering wheels of its M models, but oddly, not the M2. So before blazing the circuit or the cul de sac, you'll need to do a preflight check of all your systems.

Steering feel is remarkable and very keen at telling the driver when the front tires are on the fringe of losing traction. On the 2020 BMW M2 CS, those tires are Michelin Pilot Sport Cup 2, some of the stickiest summer tires you can fit to a road car. Our day started on a cold, rain-soaked track with standing puddles. Even in these unideal conditions, the M2 CS was easy to pilot so long as we entered corners slower and accelerated later. As the track warmed and dried, out came the animal. We flew down Monticello's straight at 150 mph—the M2 can reach a top speed of 174 mph with the M Driver's Package—and stomped on the carbon-ceramic brakes that are also unique to the CS. Then it was time to fly over a tight left-right uphill esse, sending two wheels in the air over the curbing, and roar downhill toward the next curve. The poise, balance, and control were stunning.

The same car that's a bit rough on the street is at home on a race track, with impeccable turn-in, minimal body roll, supportive seats, and torque that doesn't quit. The only BMW that felt faster on this circuit was the M5, which accelerates as hard as some Ferraris, but that midsize sedan couldn't stick the tightest corners like the M2. No doubt the CS trim's carbon fiber parts, forged wheels, and carbon brakes help it tear away from bigger, faster cars. BMW hasn't said how much the CS weighs compared to the Competition (3,655 pounds for the automatic), but on a track, every last pound matters.

Every last ounce of gas matters, too, as we pulled into the pits with zero miles remaining on the trip computer. The M2 has a 13.7-gallon tank, and fuel efficiency on the track was likely in the eights. Driven judiciously, the EPA estimates the M2 CS to return 16 mpg city, 23 mpg highway, and 19 mpg combined (the Competition is rated one mpg higher in the city). Strangely, for a modern automatic, the manual versions return higher economy on the CS (17/24/20) and Competition (18/25/20). 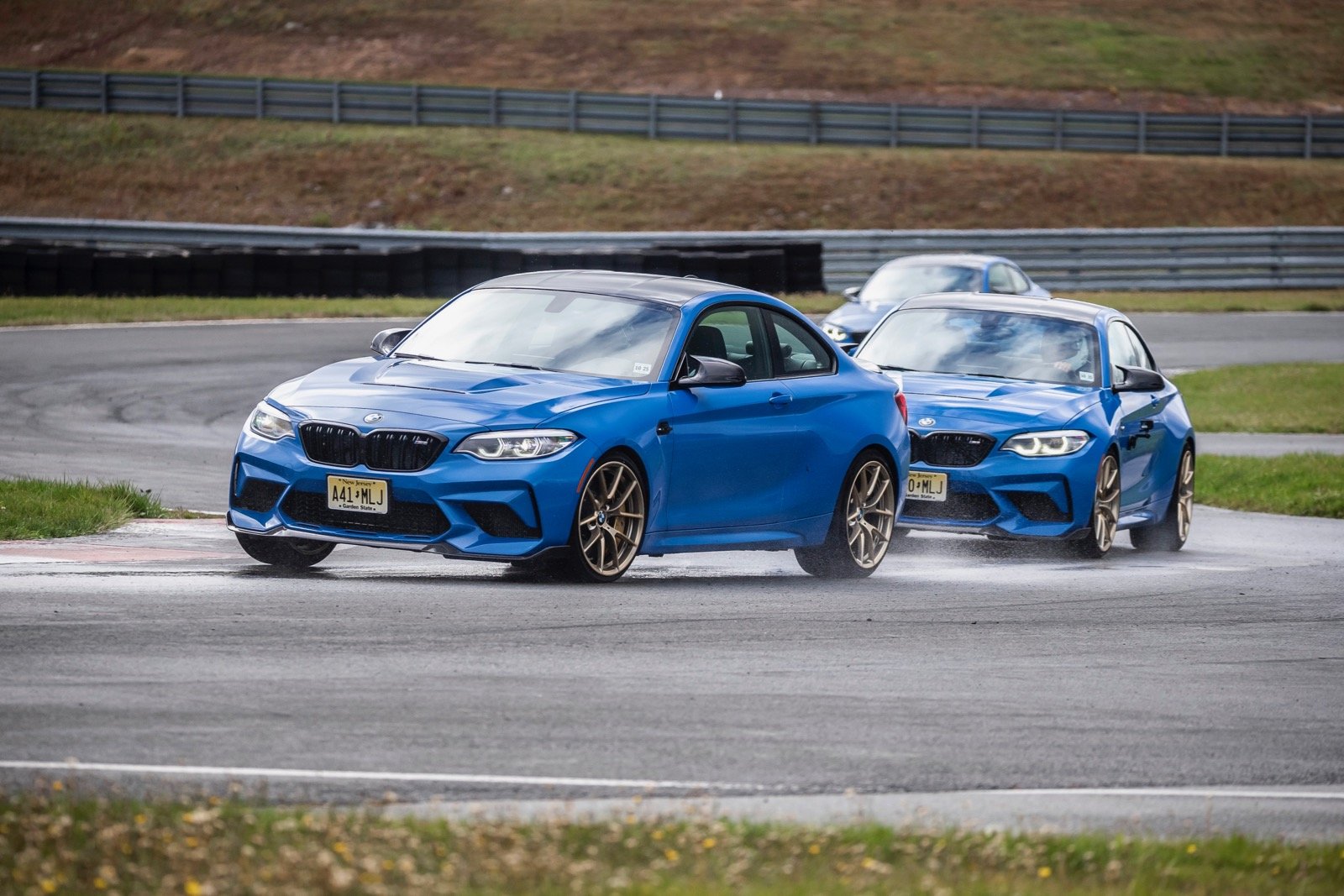 The 2021 BMW M2 is best enjoyed from the front seats. As an ordinary-looking car, there is nothing exotic about the M2's everyday driving behavior. That means great sightlines all around the car, with ample windows and large mirrors. Seat comfort is firm and supportive, although the backseat is as confining and miserable as a hockey penalty box. Instrumentation is simple, with a backlit set of analog gauges above a digital screen. Familiar climate and radio controls, plus the iDrive controller, make operating the M2 a cinch. A drawback is that the wide screen isn't touch-enabled like on newer BMWs. But even without a touchscreen, the interface is fast and intuitive, and far less distracting than systems in Jaguar, Audi, or Mercedes vehicles.

There is a trunk and stuff like cupholders and map lights. There is little else you need to know. This car's form and function is all for speed. 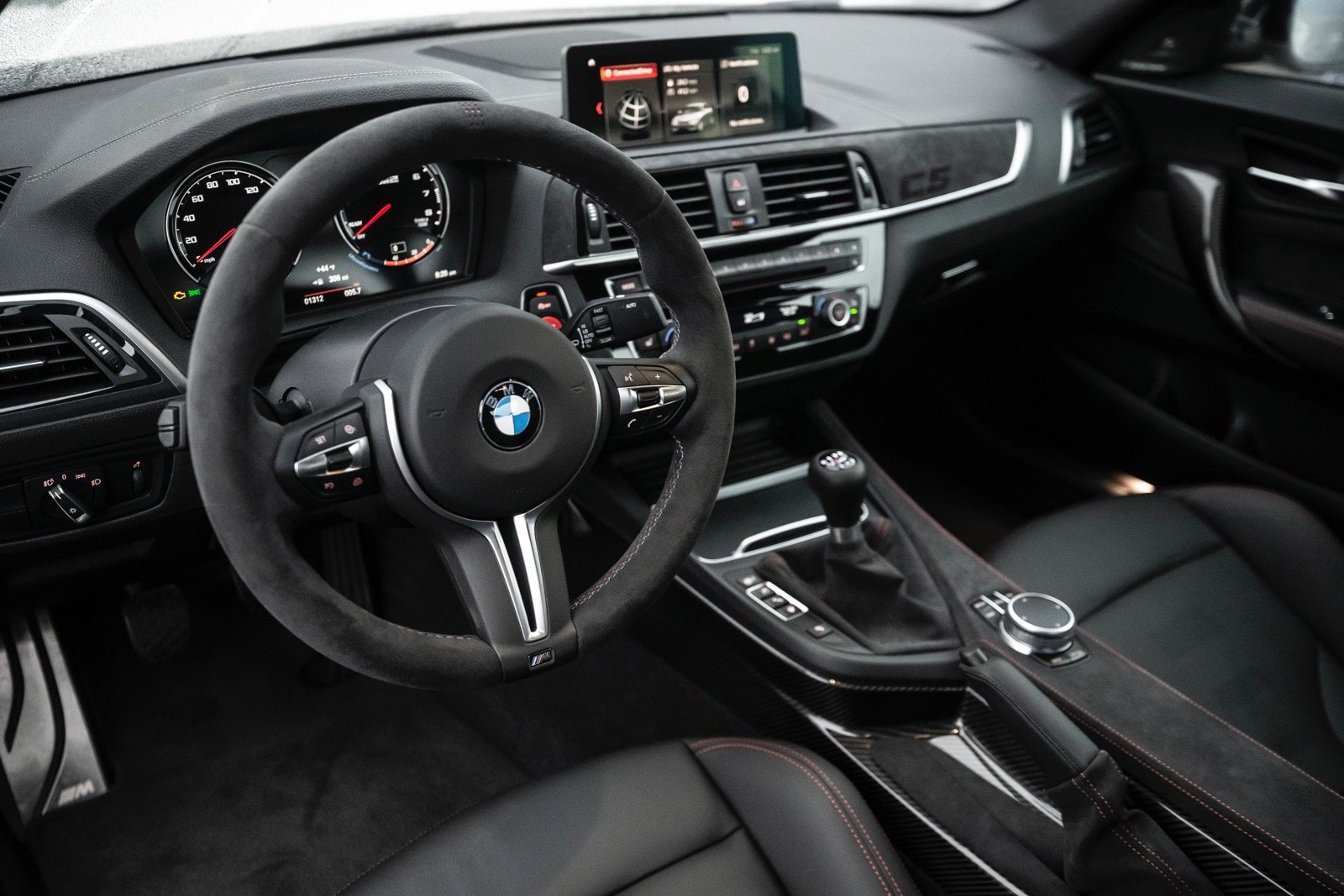 Aside from the heady level of performance-enhancing technology, the M2 makes everyday life more enjoyable. The 2020 and 2021 M2s have a lot of standard equipment the earlier models didn't, like a navigation system, a 12-speaker Harman/Kardon stereo, and heated seats. Heated 14-way power seats with a backlit M logo on the seatbacks, garage door opener, proximity key, and an iDrive system with over-the-air map updates and voice recognition were not usually standard on BMW models a few years ago. A heated steering wheel, adaptive headlights, auto high beams, traffic sign recognition, and wireless phone charging are part of a $1,200 Executive Package. Else, the only options are a small moonroof, automatic transmission, and the M Driver's Package which raises the speed limiter and throws in a day of track driving at one of BMW's factory schools. Every M2 has a black leather interior and just a handful of exterior paints and wheels.

The iDrive infotainment works well, but without the latest software version, there is no virtual assistant, touchscreen, Android Auto, or improved menus and speed. You also can't use a digital key, 360-degree cameras, or any of the innovative technology we've tested on other BMW models like the X3 M. Apple CarPlay and the BMW Connected app for remote operation both come standard. And needless to say, you won't find a semi-automated driving feature in the M2. 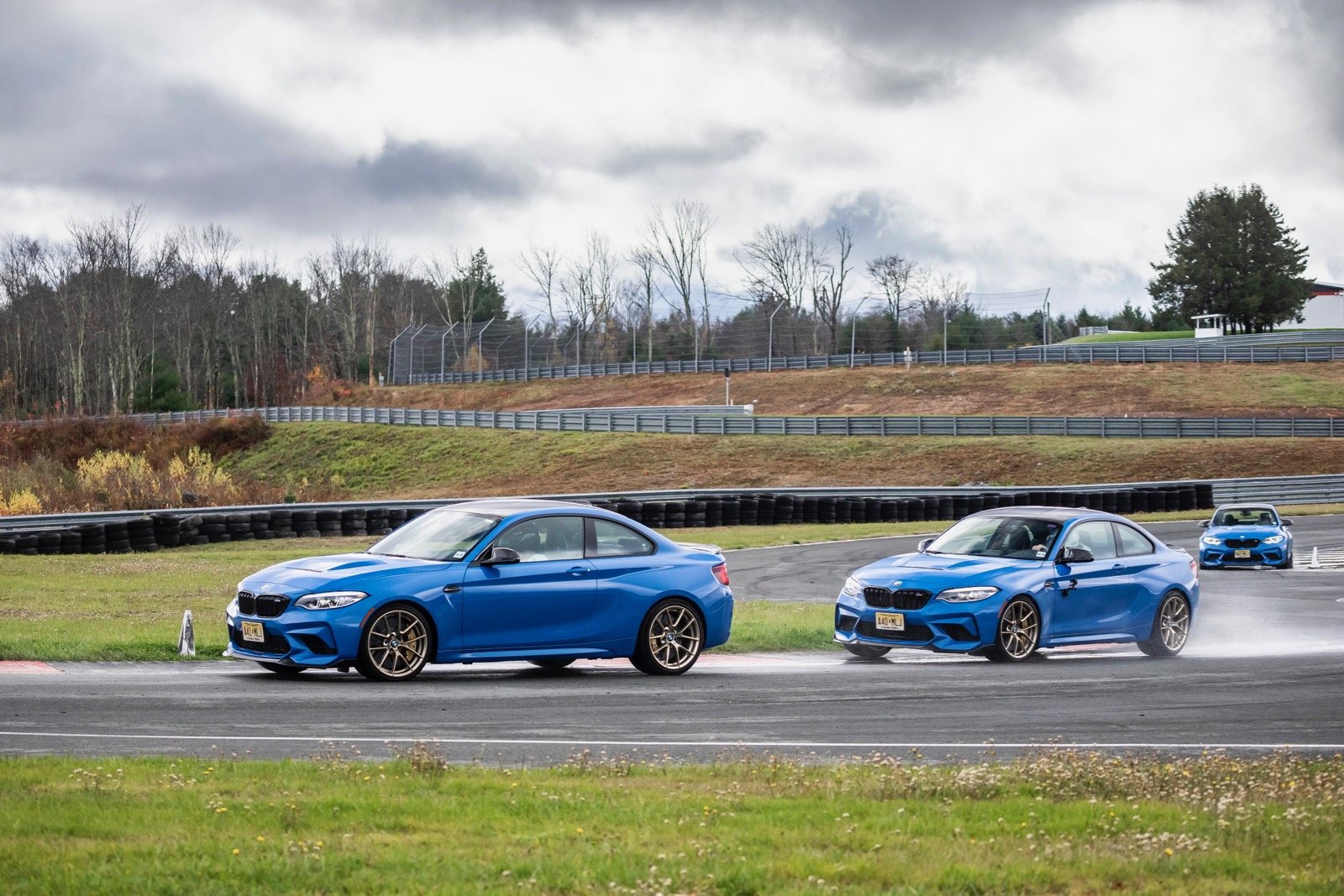 The BMW M2 and BMW 2 Series have not been tested by the National Highway Traffic Safety Administration (NHTSA). The Insurance Institute for Highway Safety (IIHS) has tested a 2014 2 Series coupe, which is structurally identical to the 2021 model, and it scored the top "good" rating in five of six crash tests (the sixth was not performed due to the Institute's budget). Forward-collision alert with automatic emergency braking, lane-departure warning, and front and rear parking sensors come standard. Blind-spot monitoring and lane-keeping assist are not offered. Driver and passenger have knee airbags. 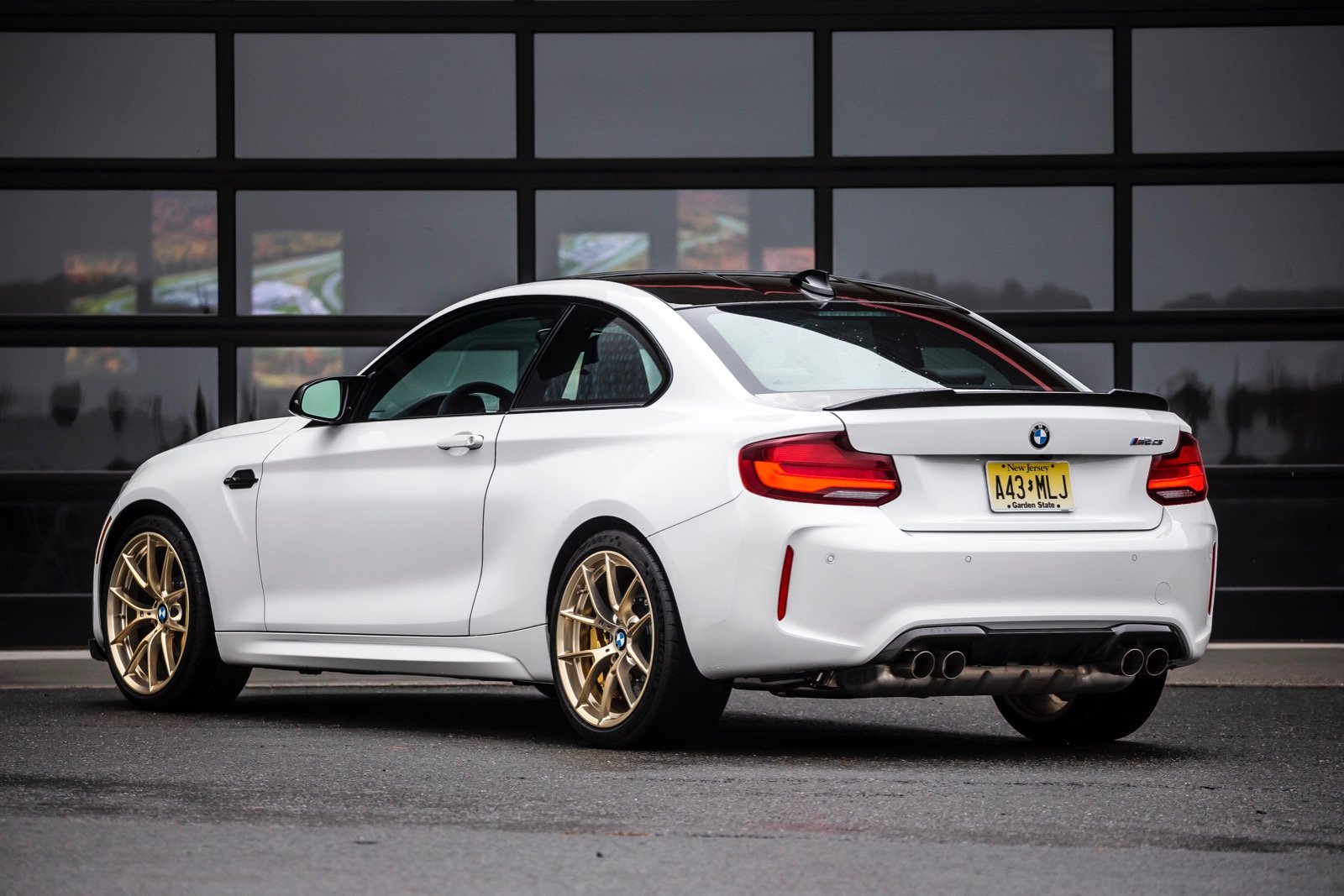 The 2021 M2 Competition starts at an MSRP of $58,900. The 2020 M2 CS, which was a one-year special, is $83,600. Given how few options are available and the limited configurations you can order, pricing doesn't escalate as it does with other BMW M models. The M2 gets serious respect in the BMW and wider car-enthusiast community, so its resale value is strong. As a track rat and everyday commuter, the M2 is an exceptional choice. From a luxury standpoint, it feels downmarket and dorky. You won't impress anyone with an M2, and that may be why its sole mission—driving—is among the best in the business.

Enter your zip to see incentives for a new M2 in your area.