Looking for a New BMW 4 Series in your area?

The redesigned 4 Series coupe grabs attention with unorthodox styling, but fails to keep it. 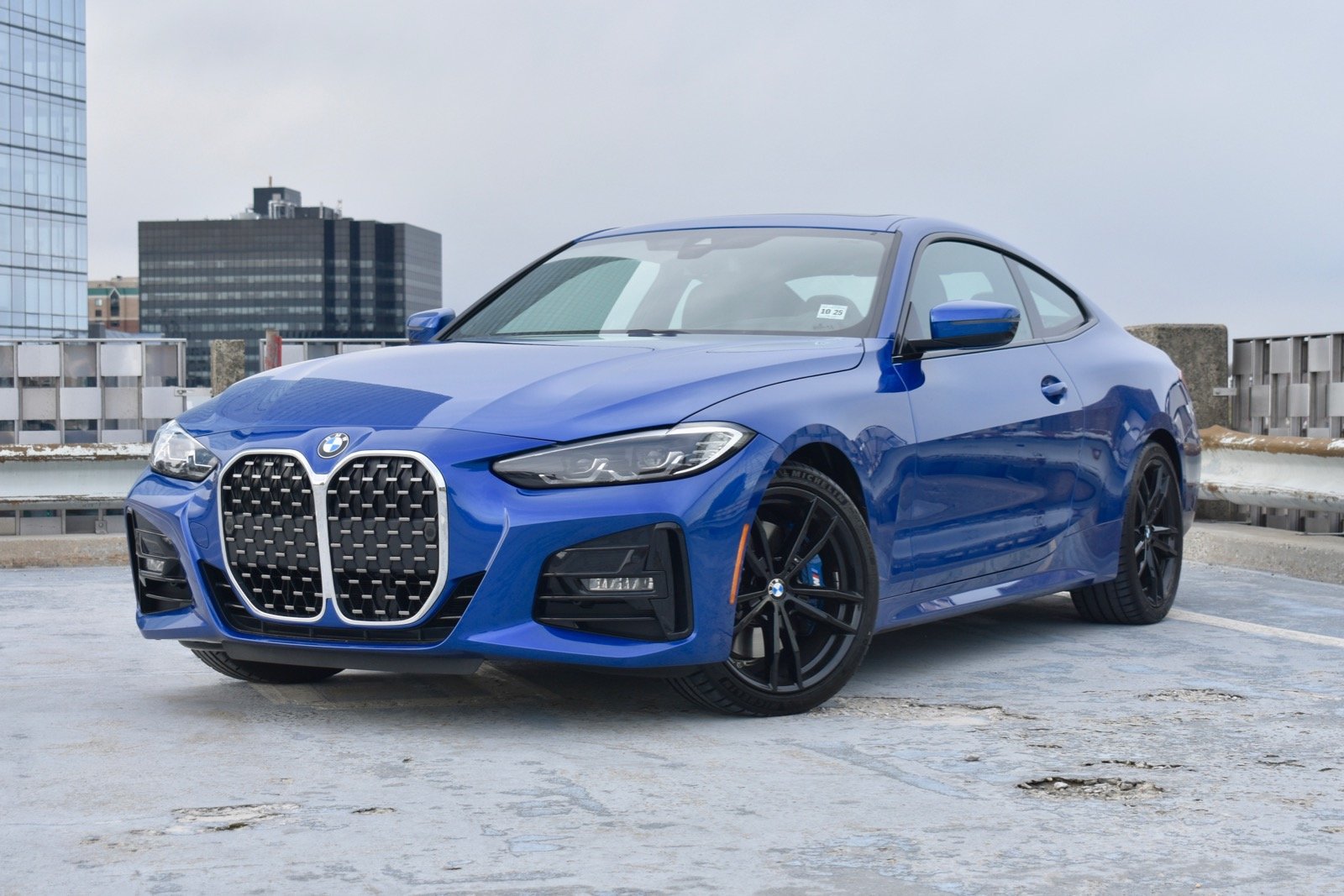 The 2021 BMW 4 Series represents how, for better or worse, BMW has changed. The 4 Series name has been around since the 2014 model year when it was introduced for the former 3 Series coupe and convertible. Earlier two-door 3 Series models built BMW’s reputation, with excellent handling, smooth yet powerful engines, and understated styling.

The redesigned second-generation 4 Series departs dramatically from that template. It’s bigger and more luxurious, with garish styling and a greater reliance on technology for performance. The car’s rivals haven’t changed though. It still competes against the Audi A5, Mercedes-Benz C-Class, Lexus RC, and Infiniti Q60 for buyers willing to sacrifice a bit of practicality to make a fashion statement.

As before, the 4 Series is available in coupe and convertible body styles—the latter with a soft-top instead of the previous retractable hardtop. Both body styles are offered in four-cylinder 430i and six-cylinder M440i configurations, with high-performance M4 variants on the way. Rear-wheel drive is standard, with xDrive all-wheel drive optional (and mandatory on the M440i coupe). Our test car was a 430i xDrive coupe. 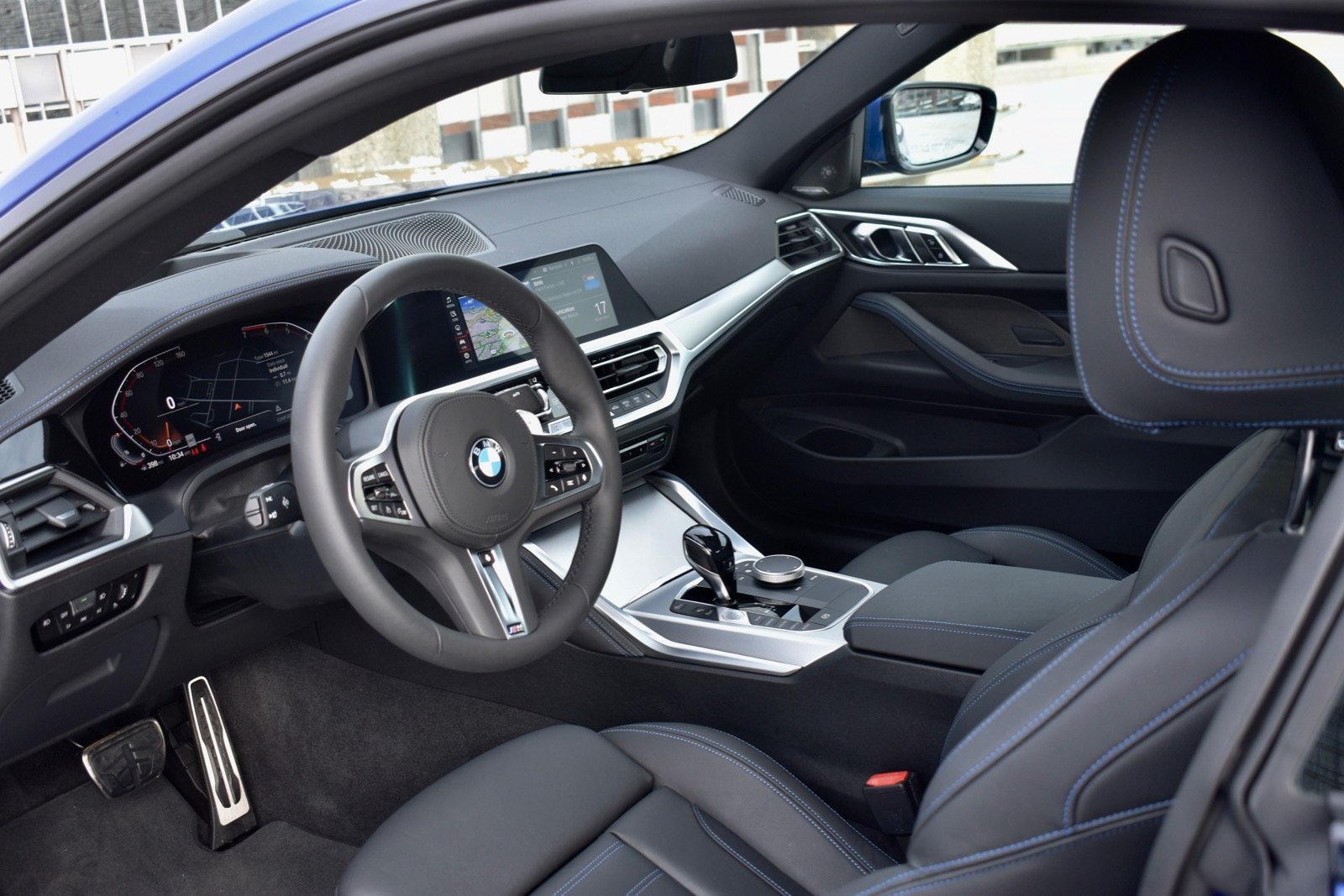 Conversations about the 2021 BMW 4 Series coupe's styling will likely begin and end with the massive new twin-kidney grille, which BMW said provides better engine cooling. Beauty is in the eye of the beholder, but we struggled to find anyone who considered it attractive. The rest of the car is fairly standard BMW styling fare, with standard LED headlights and taillights, and an overall shape that looks a bit more familiar than that Edsel-like proboscis.

The new front end is aerodynamic, though. BMW says the 2021 4 Series coupe has a drag coefficient (Cd) of 0.25, compared to 0.29 for the previous-generation model. That’s partially thanks to Air Curtain intakes on the front bumper, a feature also included on the previous-generation 4 Series. They direct air around the front wheels, ensuring a smoother flow along the sides of the car.

The new 4 Series still shares a basic platform with the BMW 3 Series sedan. It has the same wheelbase as that four-door model, and is slightly longer, wider, and lower, with a wider rear track. The 2021 4 Series coupe is also 5.2 inches longer, one inch wider, and 0.4 inches taller than the 2020 model, with a 1.6-inch longer wheelbase, 1.4-inch wider front track, and 1.2-inch wider rear track.

The interior follows recent BMW design practices, meaning it’s clean and uncluttered. Front sport seats with generous side bolstering are standard. They include 10-way power adjustment and driver’s memory. With the optional ($1,450) black leather upholstery with blue contrast stitching, materials in our 430i test car looked pretty good, but not quite up to the standards of a true luxury car. This would be a knockout interior for a Volkswagen, but falls a bit short in a car costing roughly $60,000.

To give the 4 Series coupe a sportier feel than its 3 Series sedan counterpart, BMW made paddle shifters and a leather-wrapped “sport” steering wheel standard equipment. This setup looks cool, but the steering wheel’s thickness and diameter were too large, the latter feeling more appropriate for a bus than a sporty coupe. 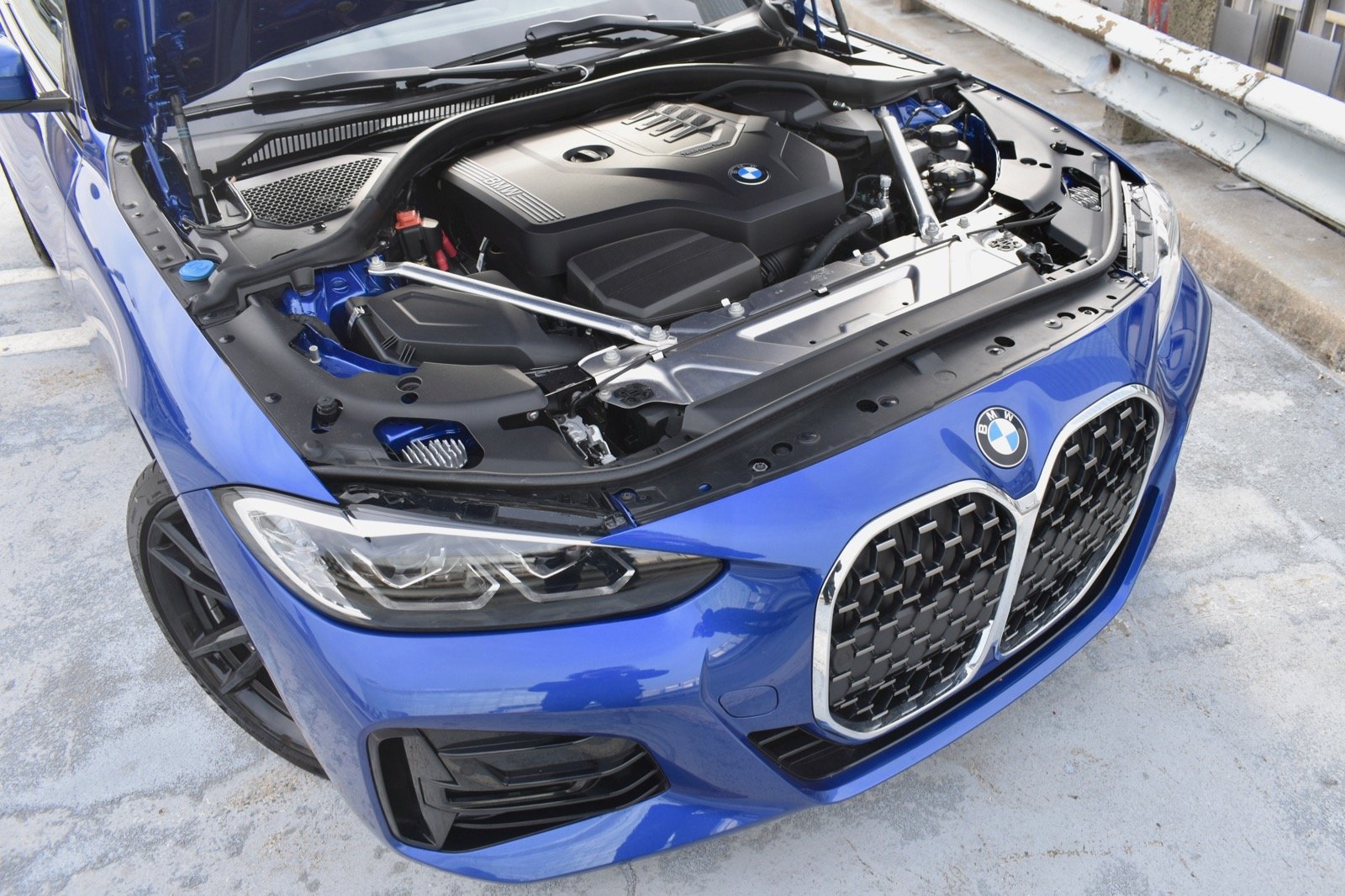 BMW offers two powertrains in the 2021 4 Series. The 430i model gets a 2.0-liter turbocharged four-cylinder engine, which makes 255 horsepower and 294 pound-feet of torque—increases of 7 hp and 36 lb-ft over the previous-generation 430i. The M440i is powered by a 3.0-liter turbocharged inline-six, producing 382 hp and 369 lb-ft of torque, and features a 48-volt starter/generator for better fuel efficiency. An eight-speed automatic is the only available transmission (a six-speed manual will be offered on the upcoming BMW M4).

The 4 Series is a pretty quick car. BMW says the base rear-wheel-drive (RWD) 430i coupe will do zero to 60 mph in 5.5 seconds, while the all-wheel-drive (AWD) 430i xDrive shaves 0.2 seconds off that time. The M440i xDrive coupe takes 4.3 seconds to reach 60 mph, according to BMW. Those numbers beat comparable versions of the Audi A5, Lexus RC, and Mercedes-Benz C-Class coupes. BMW also quotes top speeds of 130 mph or 155 mph, depending on the wheel-and-tire configuration. But that doesn’t translate to real-world fun.

In our 430i xDrive test car, that robust acceleration was hampered by a hesitant transmission. In automatic mode, it always seemed to be in too high a gear—even when pulling away from a stop—requiring the driver to push the throttle through its kickdown detent before getting any real thrust. You can use the paddle shifters to manually select gears, but that somewhat defeats the purpose of having an automatic transmission.

Our test car had the optional Adaptive M Suspension ($700), variable sport steering, performance runflat tires (part of the $3,800 M Sport Package), and the Dynamic Handling Package ($2,450), which adds M Sport brakes and an M Sport differential (most of these items are standard on the M440i model). Those seemed like the ingredients for an engaging driver’s car, but this dish could have used a bit more spice.

The chassis felt impressively composed, with minimal body roll in corners, while the AWD system and upgraded tires provided plenty of grip. But the variable sport steering made it impossible to tell what the front wheels were doing. Electric power steering systems like this have a reputation for vagueness, but BMW has done a good job tuning these systems for precision—even in much larger, heavier SUVs. So this was a bit of a disappointment.

Nothing else about the driving experience really stood out. The engine sounds like it came out of an econobox, and the Adaptive M Suspension’s different settings didn’t make an appreciable difference in ride quality or handling. At a more relaxed pace, the interior is luxury-car quiet, but with its optional 19-inch wheels (part of the M Sport Package), the test car didn’t have a ride to match. That’s normally a fair tradeoff for a performance car, but the 4 Series’ uninvolving driving experience made it the worst of both worlds. 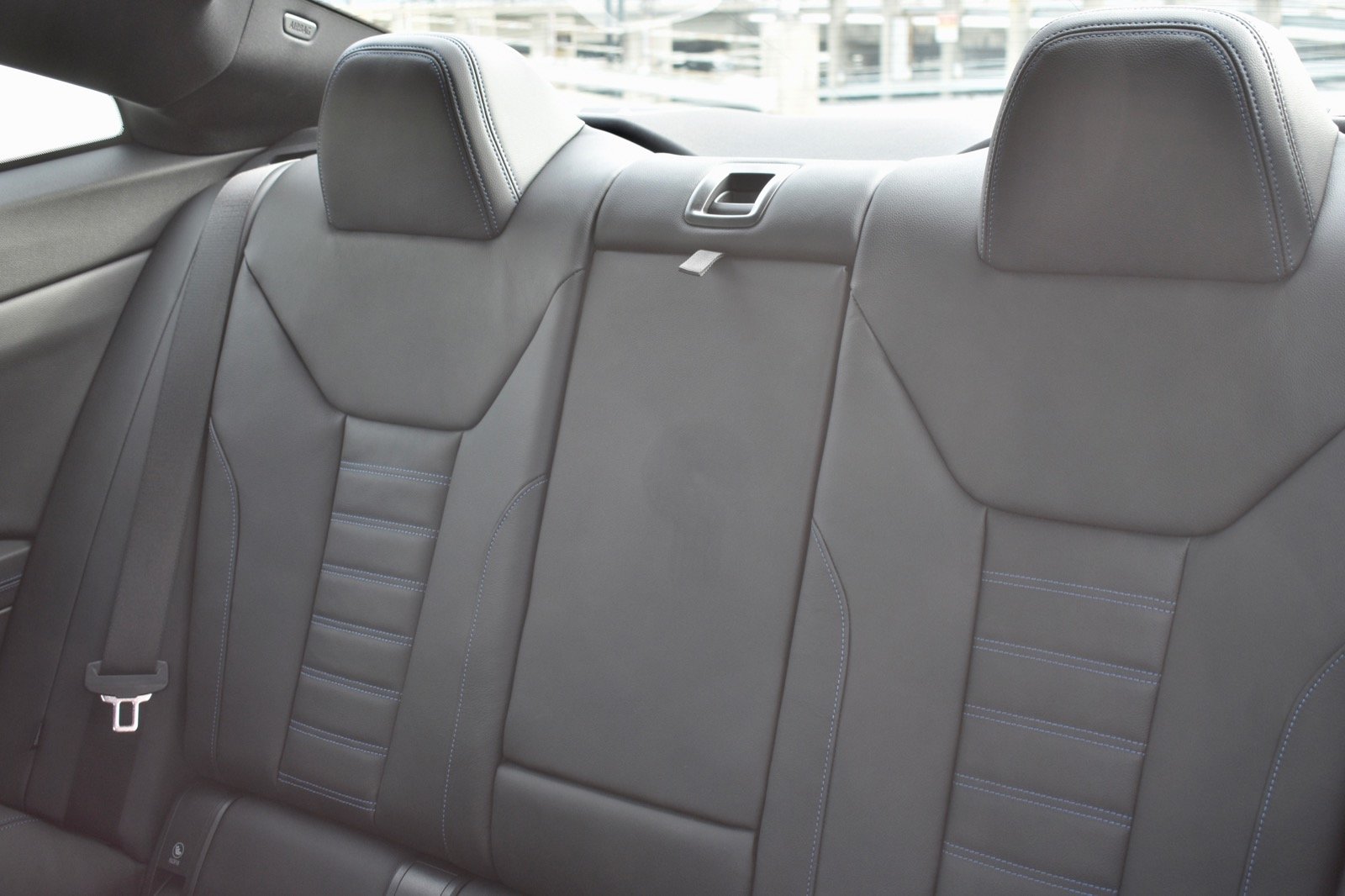 No one buys a coupe for its practicality, but the 4 Series does reasonably well for the segment. It has more front headroom and trunk space than the Audi A5, Infiniti Q60, Lexus RC, or Mercedes-Benz C-Class coupes. Except the Lexus, these competitors offer more legroom front and rear, however. The Audi and Mercedes also boast more rear headroom, but the rear seats in all of these cars are only suitable for children or occasional use by adults. If you need to carry more than one passenger on a regular basis, get a 3 Series.

Measurements aside, the 4 Series is a nice place to be if you’re the one driving. Front-seat space felt more than adequate, showing the real advantage of stepping up to a 2+2 coupe like this from a traditional sports car like BMW’s own Z4 and its Toyota Supra sibling. It’s a right-size car for people who don’t need the extra space of a sedan but might feel cramped in two-seat sports cars.

The 4 Series’ cockpit is also logically laid out. The infotainment touchscreen is nicely integrated with the dashboard and positioned so it’s both easy to see and manipulate from the driver’s seat. The cubbyhole ahead of the shifter is the right size and shape to hold a phone without letting it slide around, and the in-door cupholders are angled so drinks are easy to reach, and less likely to spill. Outward visibility is excellent, with low side glass that eliminates the bunker-like feel of many modern cars. 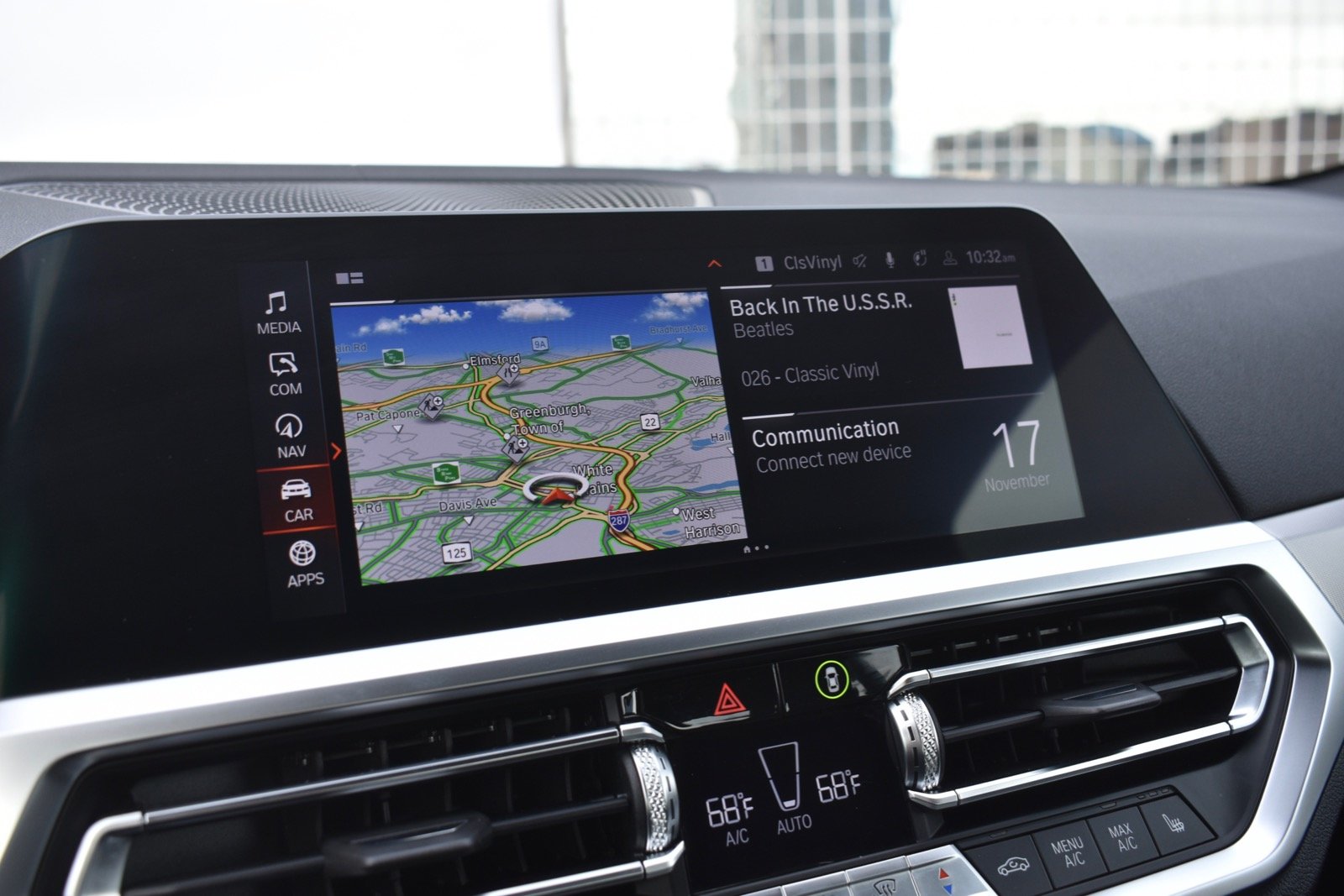 Our test car had Live Cockpit Professional, with nicely-rendered graphics and sensibly-designed menus. BMW’s iDrive rotary controller remains one of the best infotainment interfaces in the business, providing the tactile response a touchscreen never can. That made navigating the infotainment system easy, but you can still use the screen itself, or BMW Intelligent Personal Assistant voice control, which responds to the prompt “Hey BMW.” 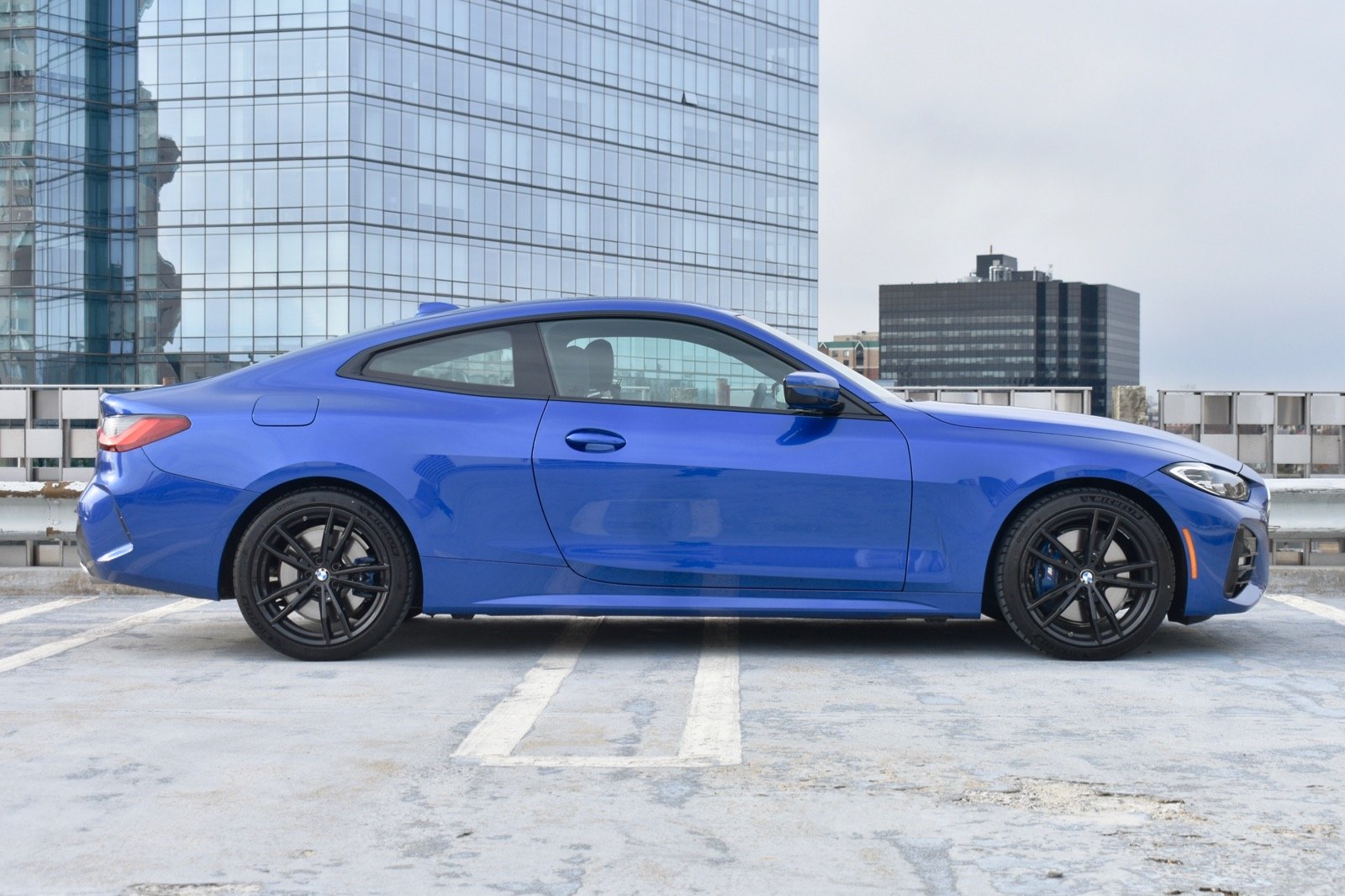 Crash-test ratings for the 2021 BMW 4 Series from the National Highway Traffic Safety Administration (NHTSA) and Insurance Institute for Highway Safety (IIHS) aren’t available yet. The 2021 model is likely too new for published ratings.

Many cars from more mainstream brands now offer adaptive cruise control as standard equipment, but on the 4 Series you’ll have to select the $1,700 Driving Assistance Professional Package to get it. Granted, that buys a fairly sophisticated system that can bring the car to a complete stop and set off again in traffic, as well as steering assist to keep the car centered in its lane. 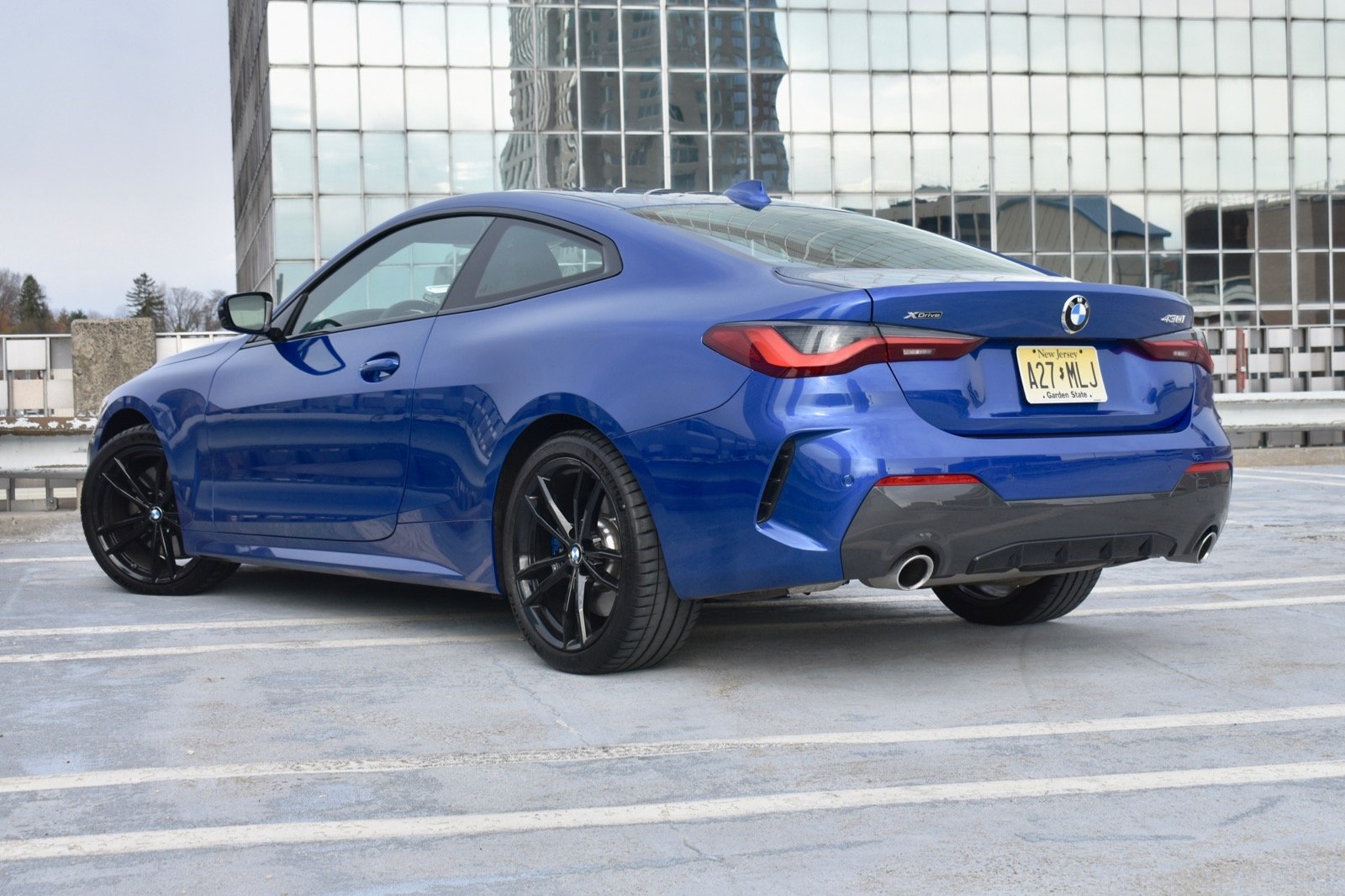 The 2021 BMW 4 Series is impressively refined and user friendly, but like most other luxury cars, it is a poor value proposition. Getting the features that set it apart from an ordinary car mean spending significantly more than the base MSRP. Pricing for the 430i xDrive coupe starts at $47,600, but add in features like the Live Cockpit Professional infotainment system, leather upholstery, and the various M performance upgrades, and our test car rang up at $61,220.

But even among other luxury brands, the 430i xDrive coupe is priced uncompetitively. Similar money will buy an Infiniti Q60 Red Sport 400 AWD—with a 400-hp 3.0-liter twin-turbo V6. It will also let you upgrade from an Audi A5 or Mercedes-Benz C300 coupe to the sportier S5 and AMG C43 versions, respectively. The BMW still has some things to recommend it, such as an infotainment system that’s much easier to use than the Infiniti or Mercedes systems, but it’s still not a good value.

If a stylish and sporty coupe is all you want, it might also be worth looking at a Ford Mustang or Chevrolet Camaro. They aren’t status symbols like the 4 Series, and lack some of its tech and convenience features, but also offer a more engaging driving experience at a much lower price.

dbk123 Its almost Jaguar E, its a good look for a car.

Enter your zip to see incentives for a new 4 Series in your area.