Toyota’s world-conquering flagship SUV sails on for another journey around the sun. 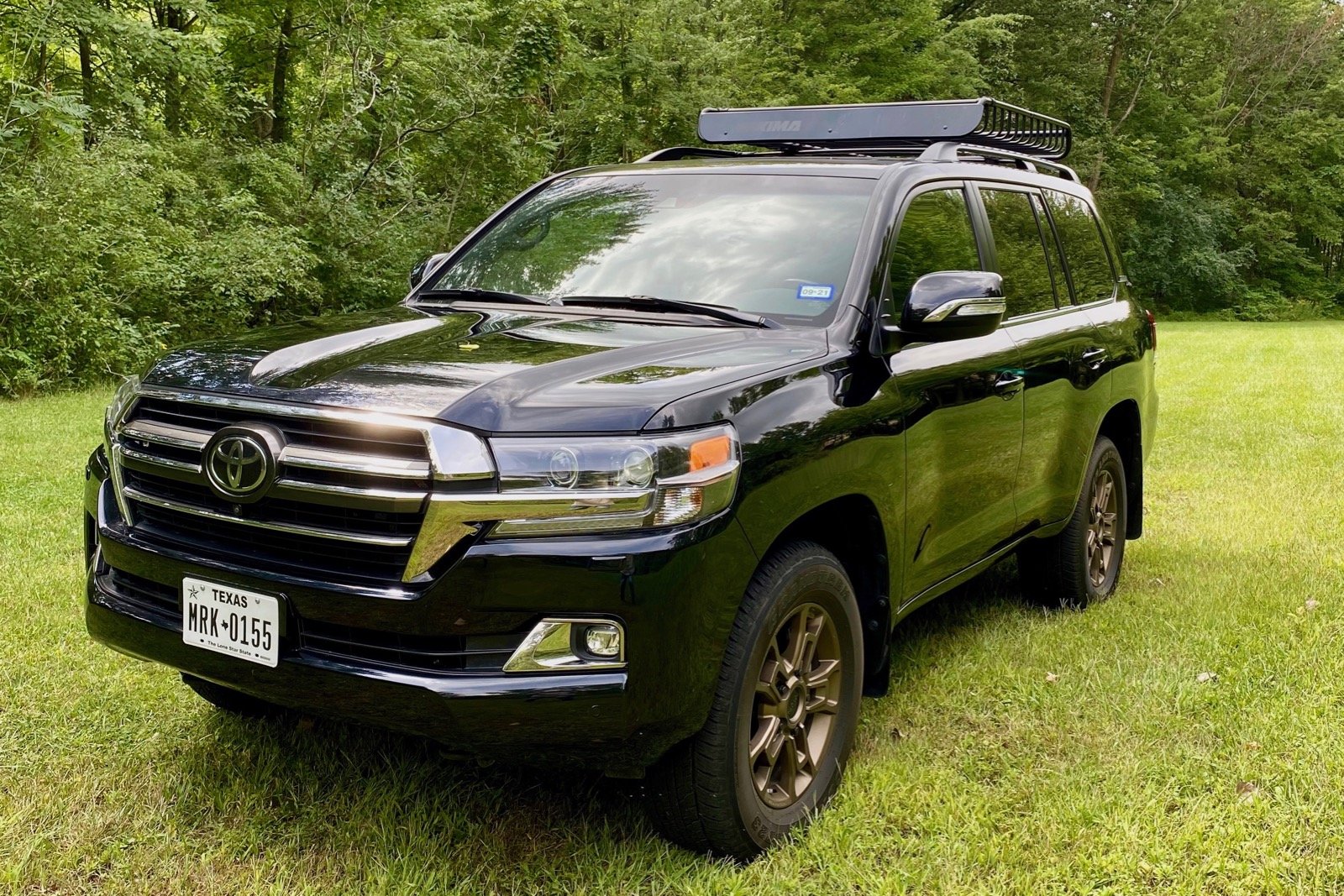 Go anywhere in the world, and you’re likely to run into a Toyota Land Cruiser. In the United States for 2020 there’s just one Toyota Land Cruiser model, a full-size body-on-frame four-door SUV with either two or three rows of seating. The plush yet capable Land Cruiser 200-series debuted as a 2008 model, and continues today with minor cosmetic, mechanical and technology upgrades. 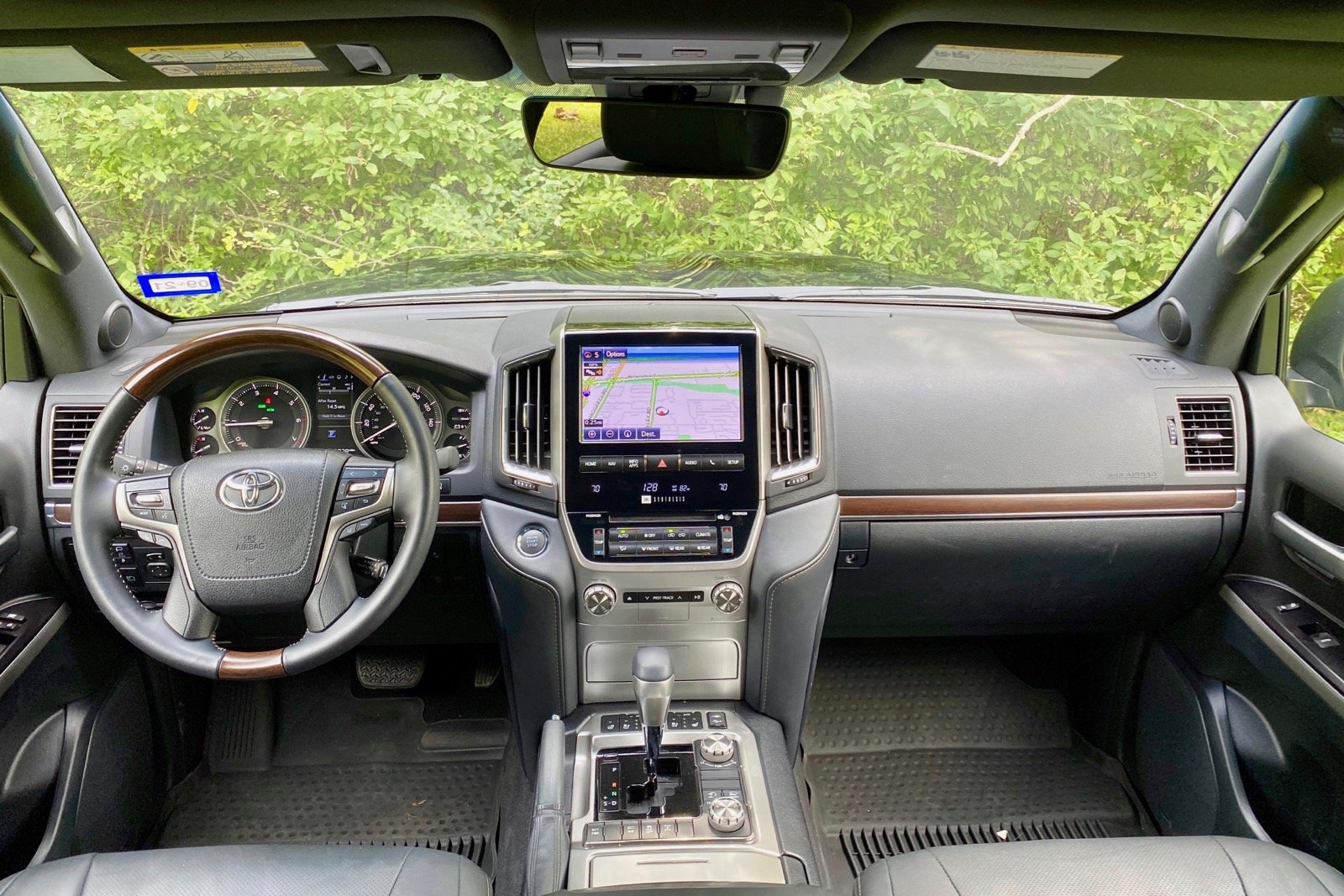 The Toyota Land Cruiser has the kind of looks that sneak up on you. Not flashy or exotic, the big SUV has subtle styling features that make sense only after spending some time behind the wheel.

For instance, when car designers want to emphasize power, they use the shorthand of a domed hood, bulging at the center as if it can barely contain the beast within. The Land Cruiser’s hood, by contrast, is dished in the center. This is not a contrarian design statement—it’s form following function. By lowering the center of the hood, Toyota improved the driver’s forward sight lines, which help when navigating obstacles on the trail. When you sit in the cockpit, you can literally see where the SUV’s nose ends—no guesswork involved.

Similarly, the Land Cruiser’s fenders bulge out a bit from the smooth sides of the vehicle. This makes space for wheel travel, while providing a visual indication of the vehicle’s width. Start to appreciate these subtle choices, and the Land Cruiser looks better and better. Of course, deep rich paint and nicely-polished trim don't hurt, either. Our test vehicle was a Land Cruiser Heritage Edition, which included blackened trim, a Heritage Edition grille with black inserts and a darkened chrome surround, darkened-chrome mirrors, 18-inch bronze BBS wheels, and a “Toyota Land Cruiser” heritage badge that added just the right retro flair. A Yakima Mega Warrior roof rack let people know that our Land Cruiser was ready for overlanding adventures.

Inside, the Land Cruiser is as close to luxury as a Toyota can get without stepping into Lexus territory. The Heritage Edition is a two-row, five-passenger SUV with black perforated leather-trimmed seating and a tonneau cover to conceal cargo, while the standard edition gets a third row of seating (for a total of eight seating positions).

The dash is functional looking, if a little plain, especially on the passenger’s side. The center stack houses a 9-inch color touchscreen infotainment system and a lake of buttons, switches, and knobs that spill down the stack and onto the center console, controlling everything from HVAC to navigation, to audio, to traction control and differential settings. The instrument panel above the leather-and-wood steering wheel is a cluster of old-school analog gauges, with a small driver information display at center.

Overall, the interior is luxurious and well-executed; comfortable, functional, but a little bit dull. 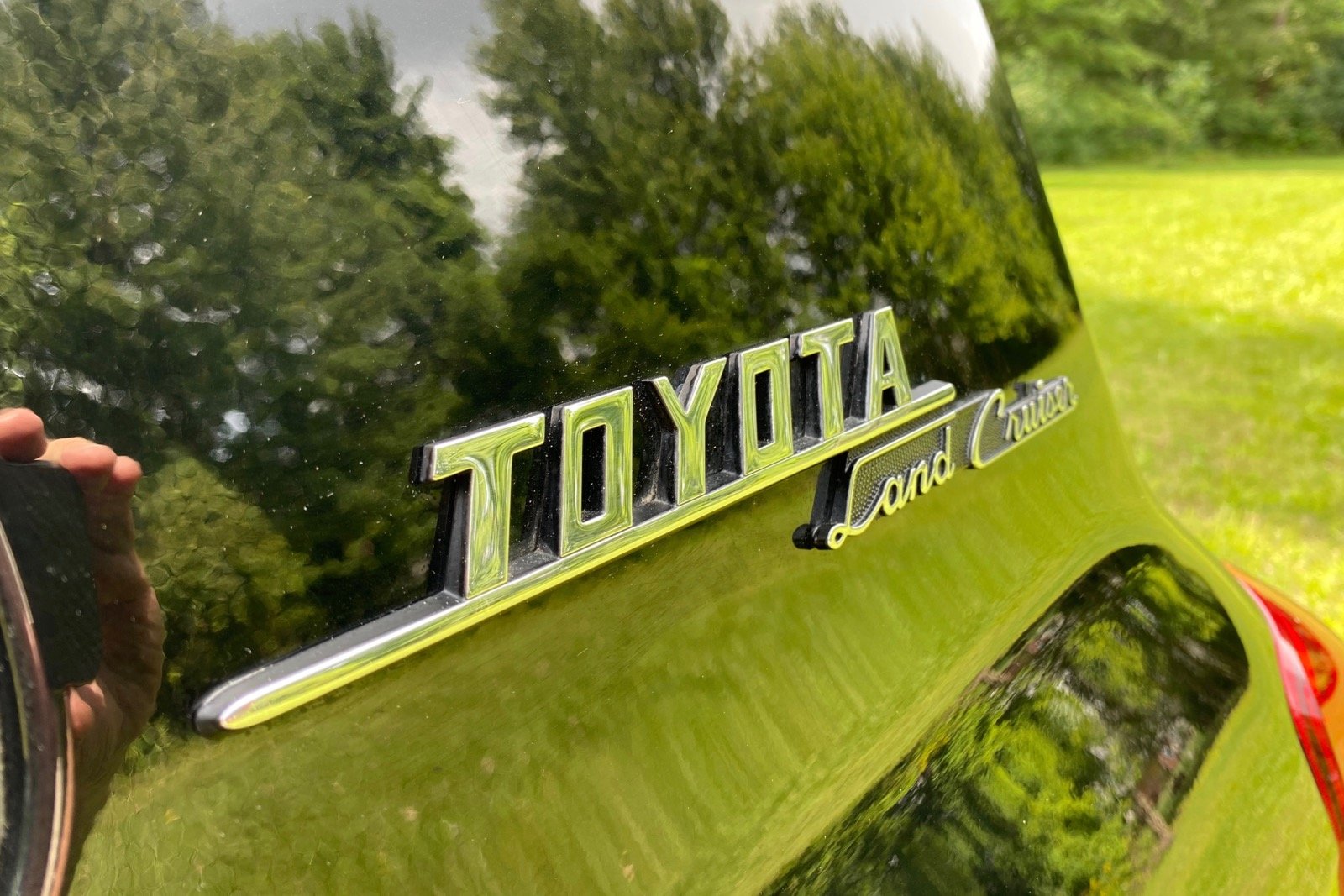 The full-time 4WD system is mated to a Multi-Terrain Select control knob in the center console, allowing driver to easily match engine, brake, steering, and traction control to surface conditions when off-roading. Active Traction Control and a Torsen limited-slip center differential with locking capability and Crawl Control with Off-Road Turn Assist make sure that you’re traveling securely over any terrain.

There’s no doubt that the Land Cruiser is a big vehicle when you’re behind the wheel, but the command driving position, big windshield and great outward visibility make a compelling argument for swallowing up the miles. Body roll is nicely controlled and minimized and, though you wouldn’t choose a Land Cruiser for an autocross competition, sane and sober driving yields good results. The “Cruiser” part of the name is apt, because there’s something serene and relaxing about the way the Land Cruiser gobbles up the miles. We'd gladly follow the horizon in its driver’s seat. 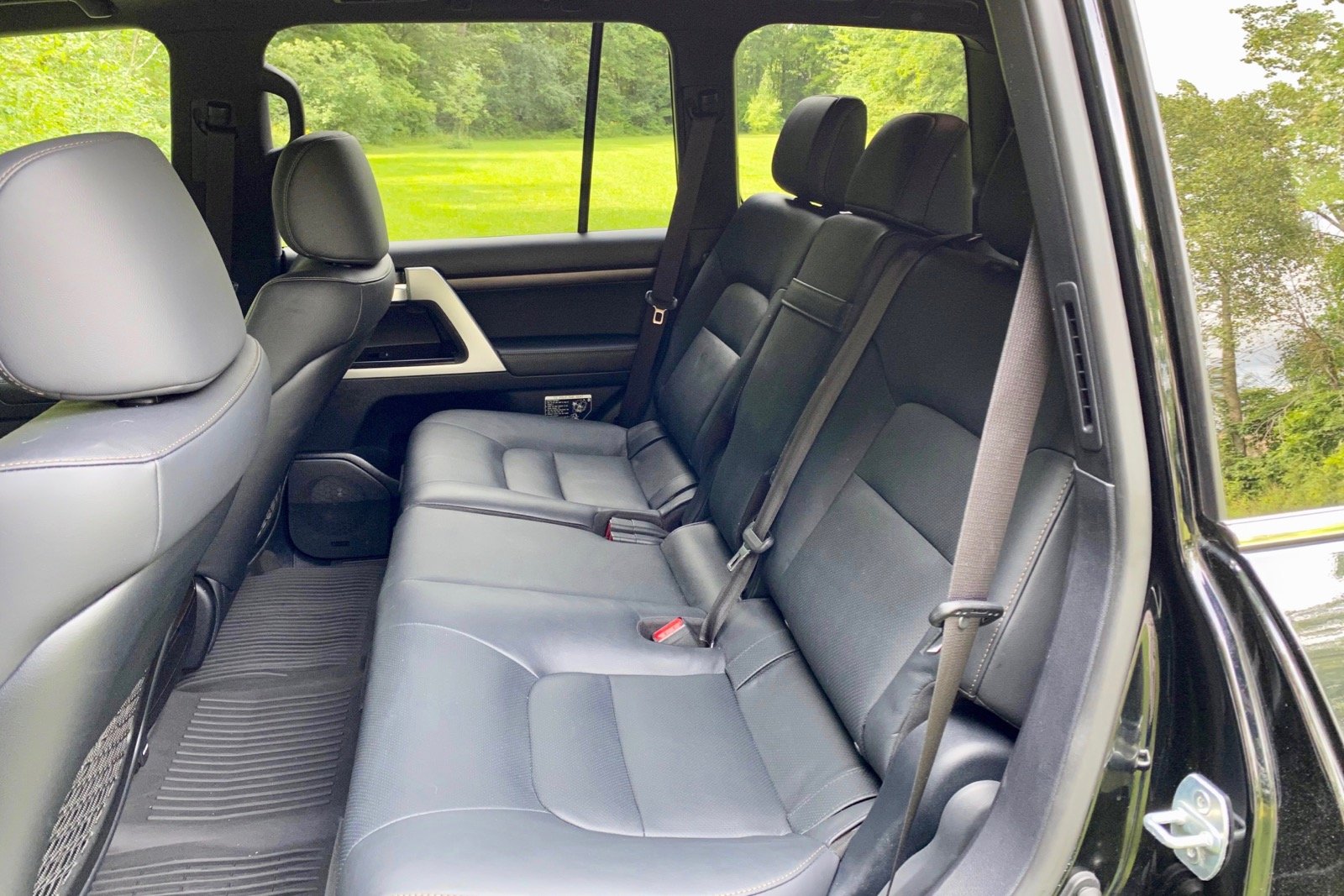 The Land Cruiser’s dual personality as commuter/overlander manifests itself on both the exterior and interior.

Standard skid plates protect the front suspension, radiator, fuel tank, and transfer case—great for the countryside, and even sometimes for the city. Same with front and rear frame-mounted tow hooks, and front and rear heavy-duty mudguards. A roof rack is standard, with a special Yakima model on the Heritage Edition. A windshield wiper de-icer and rain-sensing windshield wipers are welcome by everyone everywhere.

Families will appreciate the three-row configuration of the standard-model Land Cruiser, which also features aluminum running boards to ease entry. The heated second-row seats are split 40/20/40, and slide, recline, fold and tumble as needed to reconfigure interior space. Third row seats are split 50/50 with folding headrests. A full-size spare tire is concealed beneath the cargo load floor.

A rear-seat entertainment system is available for $2,220 on the standard model (not available on the Heritage Edition) with two individual 11.6-inch display screens, RCA jacks, HDMI input, remote, and two wireless headphones.

The Land Cruiser can tow up to 8,100 pounds and comes with an integrated towing receiver hitch and wiring harness with four- and seven-pin connectors. Standard Trailer-Sway Control is a great feature.

One of Land Cruiser’s signature features is its split tailgate, a charming setup that simply cries out for a picnic. The lower third of the tailgate folds down, while the top two-thirds with the window are top-hinged. Loading and unloading is easy, and the whole thing is somehow retro and cool. 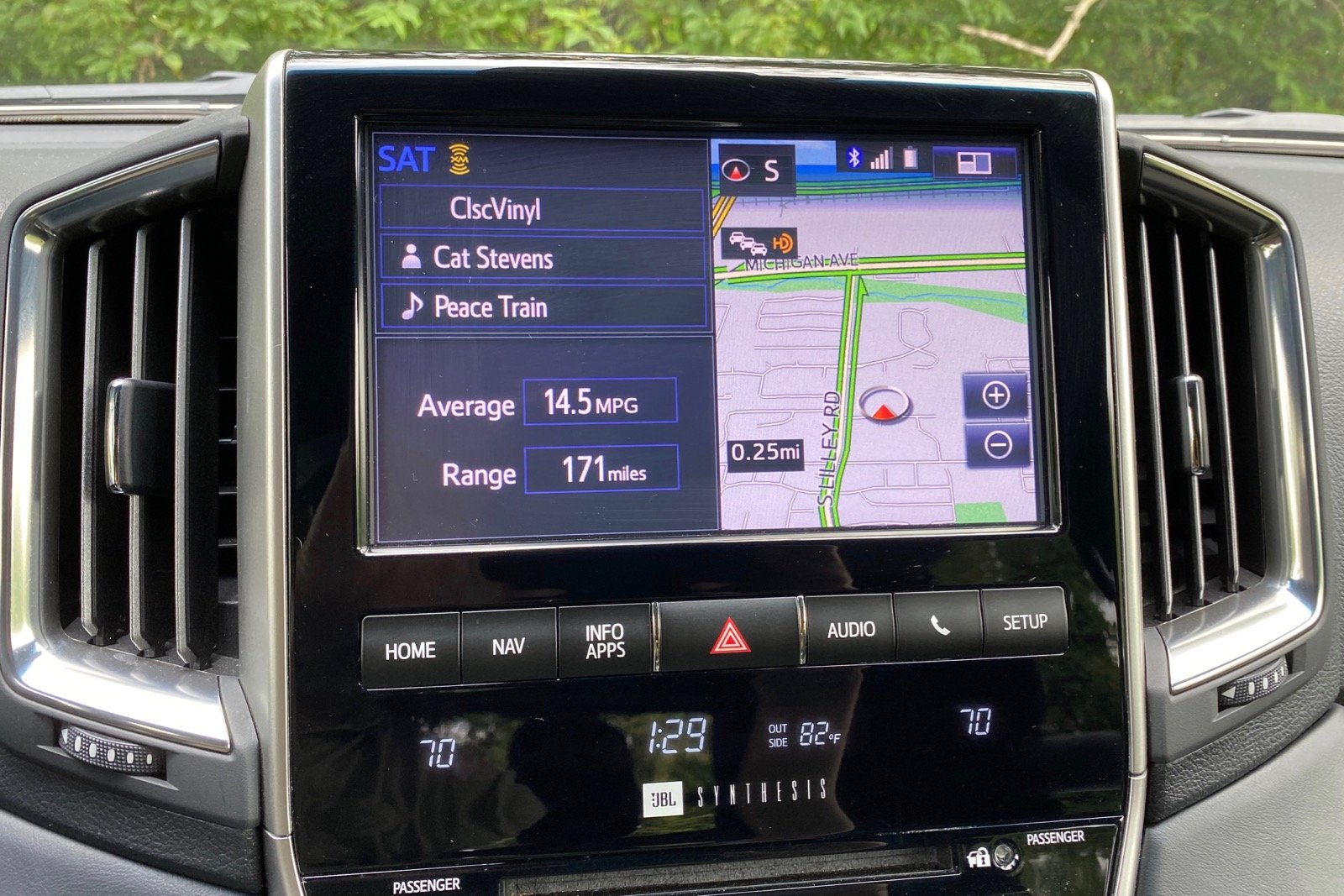 While the Land Cruiser has been riding on the same platform, in the same generation, since 2008, Toyota has done a good job of continuously updating its technology wherever possible.

Keeping up with the latest trends, the 2020 Land Cruiser has a Qi-compatible inductive charging station for smartphones and other devices, a welcome tech feature for customers who have up-to-date devices.

The Land Cruiser’s 9-inch touchscreen interface is sufficient, but it looks a little small compared with some of the fresher competitors, where 11-inch, 12-inch, and multiple-screen interfaces are not uncommon. Using the 9-inch screen in split-screen mode for navigation and audio leaves little room for a useful map, negating much of the usefulness of the mode.

The touchscreen is also the display for Land Cruiser’s very handy Enhanced Multi-Terrain Monitor camera with selectable front, side, or rear views. Not only is this system useful on unfamiliar terrain, like negotiating a narrow trail or path, it can also be employed on a daily basis—especially if you’ve got a tight garage parking space to pull into and out of. 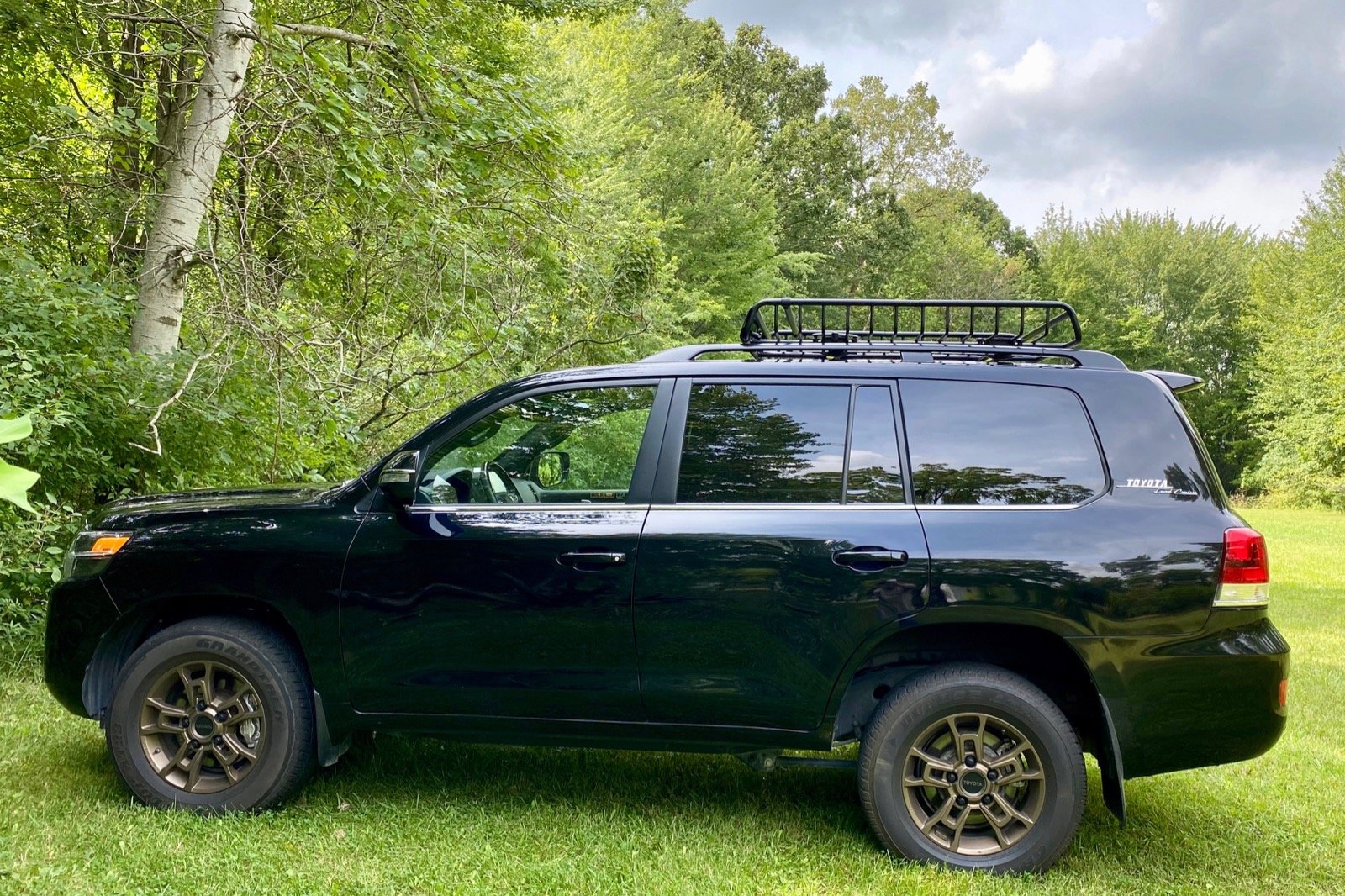 The Land Cruiser has not been crash-tested by the National Highway Traffic Safety Administration (NHTSA) or the Insurance Institute for Highway Safety (IIHS), so there’s no independent data available on its crash-worthiness. With a curb weight of 5,715 pounds to 5,815 pounds and a highly rigid body structure, it will have mass on its side in most vehicle-to-vehicle encounters.

Avoiding the crash is just as important. To that end, the Land Cruiser is equipped with Toyota Safety Sense P (TSS-P), a suite of advanced driver assistance features including a pre-collision system with pedestrian detection, lane-departure warning with sway-warning system, automatic high beams, and adaptive cruise control. 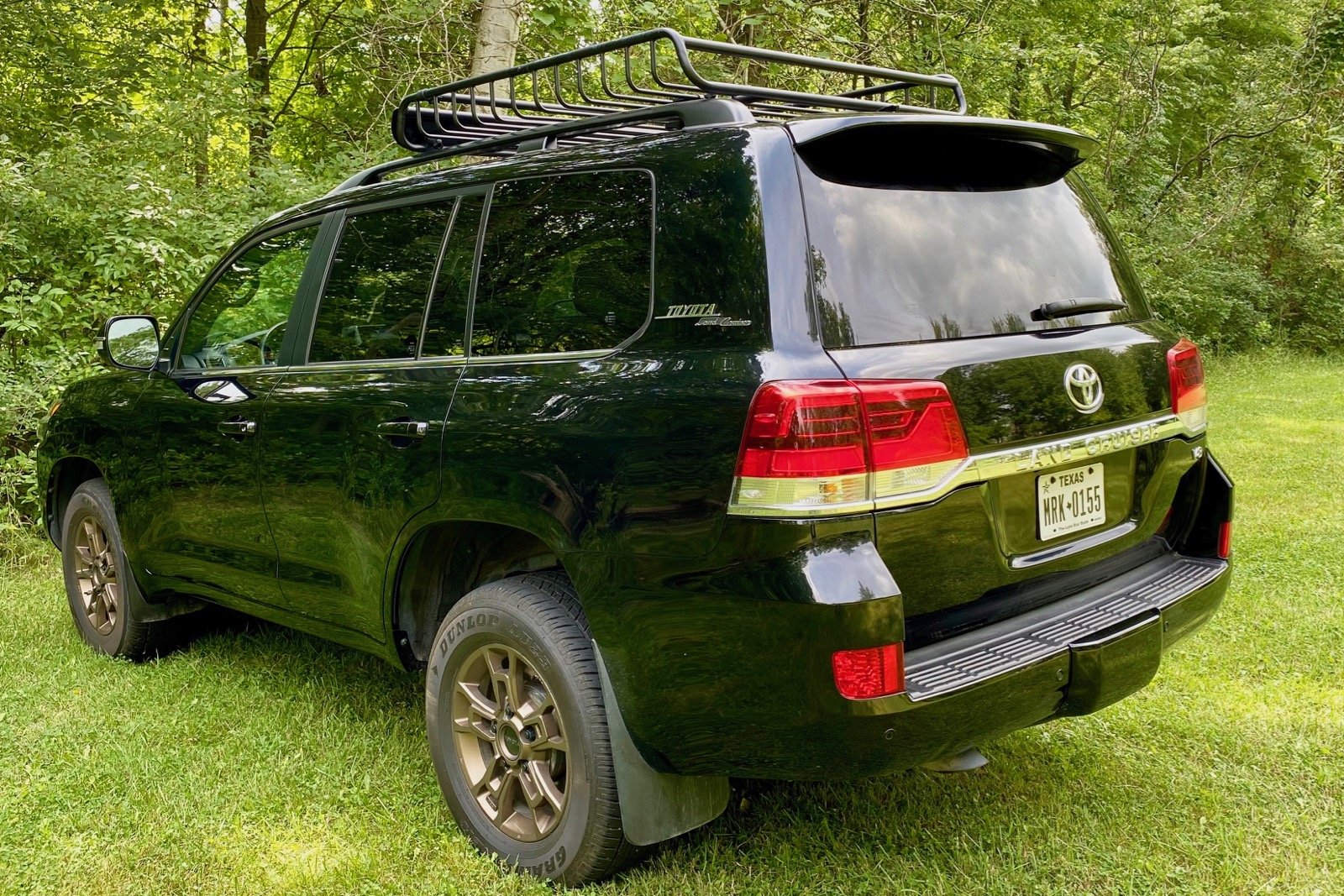 The Land Cruiser is the most expensive vehicle in the Toyota lineup for the 2020 model year, as it has been for most of its product cycle.

The base Land Cruiser starts at $85,415, while the Heritage Edition starts at $87,745. You can load up with a few accessories, but there’s really only one options package: the $2,220 Rear Seat Entertainment Package, which is available on only the base model. Our test vehicle was a Heritage Edition with an as-tested price of $89,239, including a $299 Glass Breakage Sensor and mandatory $1,295 destination charge.

If you’re considering a Land Cruiser, you should also drive a Lexus LX, the Land Cruiser’s near-mechanical twin, but with even more luxury and the addition of electro-hydraulic suspension with four-wheel Active Heigh Control and automatic load-leveling Adaptive Variable Suspension, which can deliver a slightly better on-road driving experience. Off-road, the Land Cruiser has better geometry, however. There’s not a big price gap between Land Cruiser and LX, which starts at $86,580 for a two-row model/$91,580 for a three-row.

Beyond the Toyota/Lexus family, consider the Chevrolet Suburban, GMC Yukon XL, and Cadillac Escalade, which can deliver a similar mix of go-anywhere personality. The Land Rover Discovery, Infiniti QX80, Mercedes-Benz GLS-Class, and BMW X7 are all luxury takes on the three-row SUV, and each has surprising soft-road chops.

As much as we love the lore of the Land Cruiser and appreciate its heritage and legacy, its price tag puts us off. While it is a wonderful vehicle with great capability, engineering, and build quality, it might just be too much car for the money—especially when Toyota has a very capable mid-size SUV in its lineup, the 4Runner, that starts at just $36,340 and a three-row body-on-frame people hauler, the Sequoia, that starts at just $49,980.

What's your take on the 2020 Toyota Land Cruiser?

Have you driven a 2020 Toyota Land Cruiser?
Rank This Car

Can You Get An Air Bag On Any Car