The most comfortable midsize SUV is all-new for 2020. 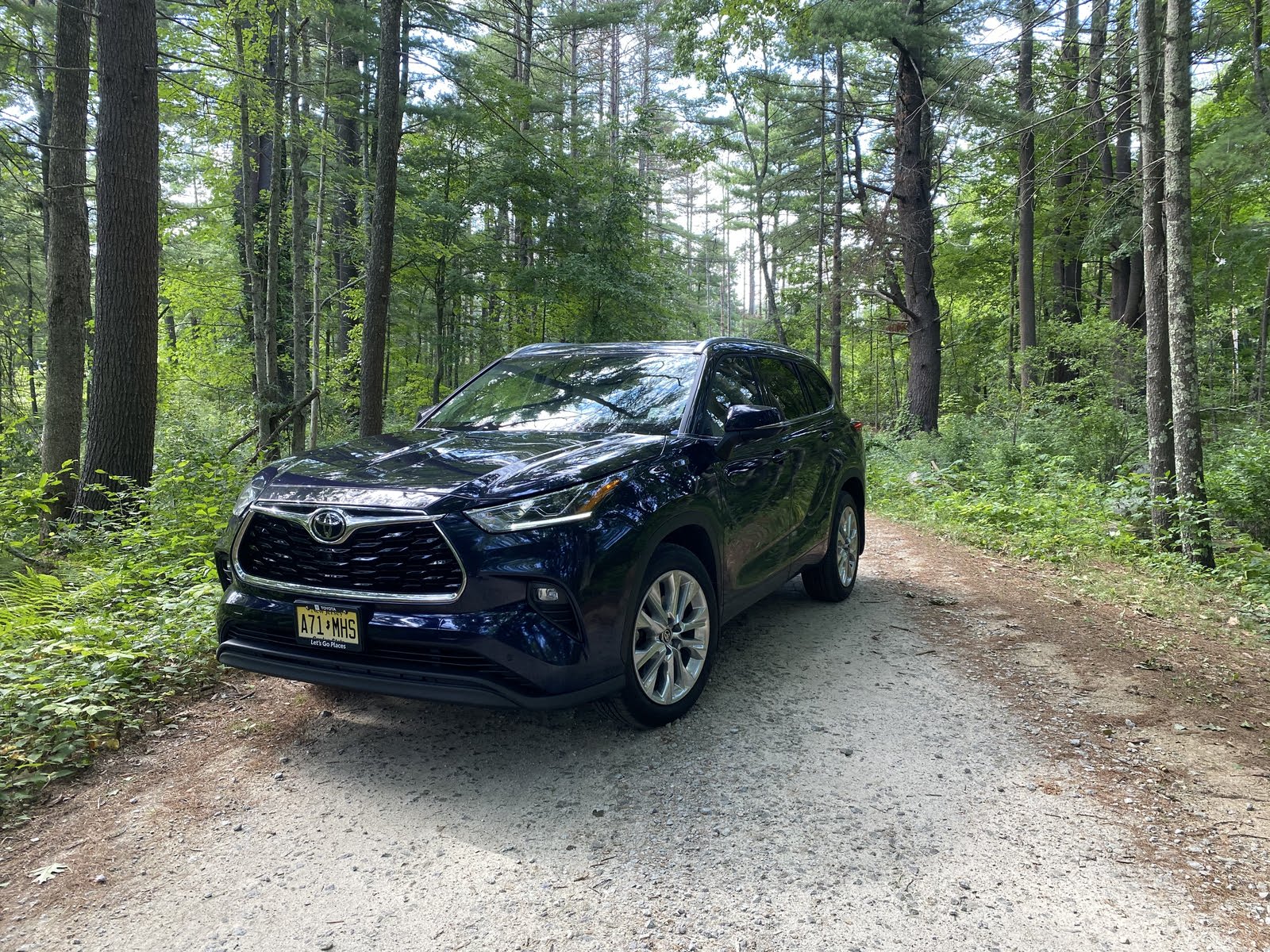 Midsize three-row SUVs are all spacious and powerful, but only the Toyota Highlander reaches the premium threshold for passenger comfort. Redesigned for 2020, the Highlander's revised styling and technology are secondary to its silent operation, soft ride, and cosseting interior. The upper trims feel and drive just like a Lexus, without the upcharge. There is nothing exciting about a Highlander, and yet, there is no other SUV in the $35,000 to $50,000 range that feels so effortless and tranquil. 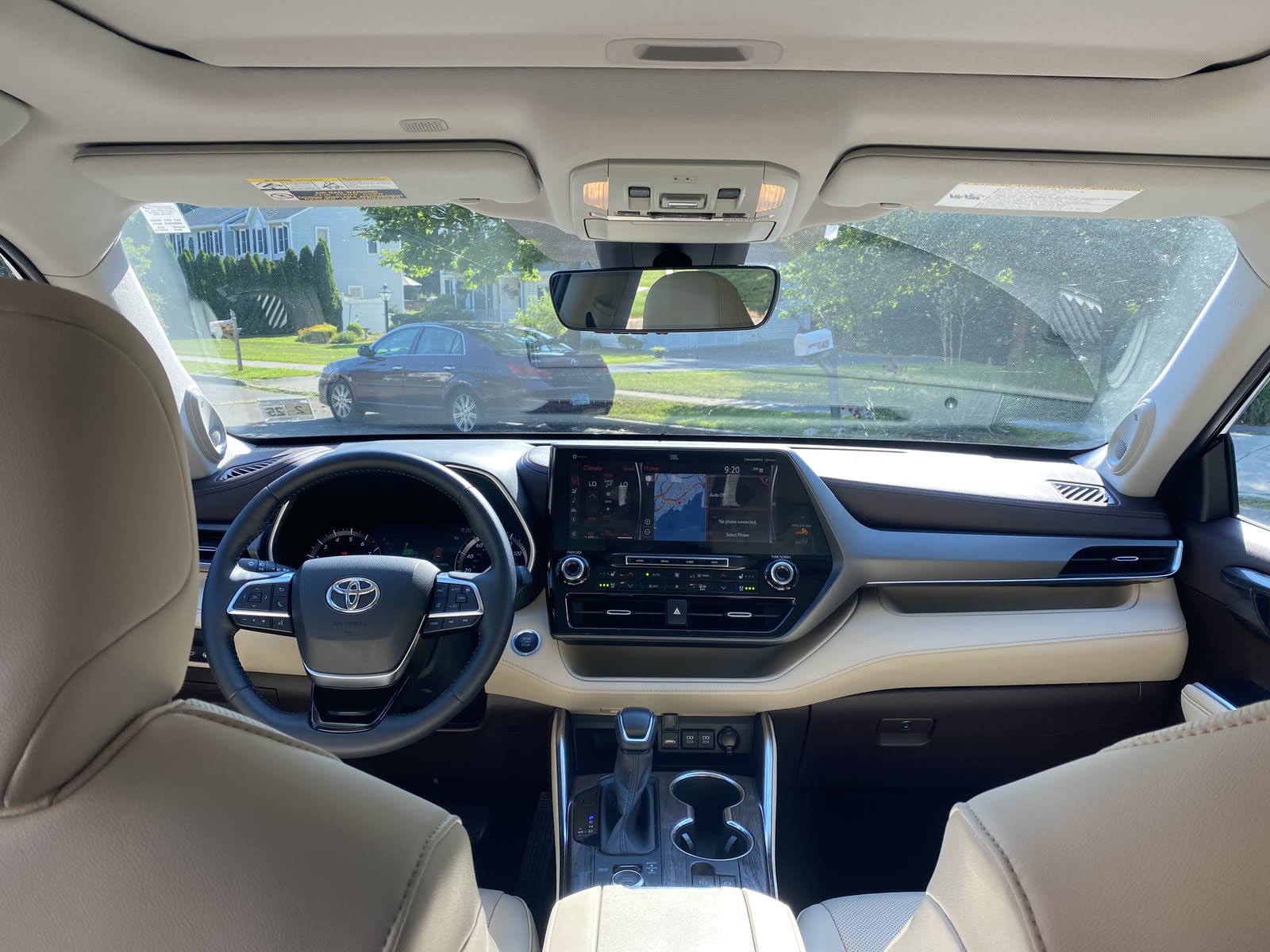 From the side, a Highlander could be anything. Compared to the previous model year, the tailgate glass is slanted a few more degrees and the body panels have more exaggerated creases that trace wide arcs around the front and rear fenders. The Toyota theme is trapezoidal, a shape that defines the tailgate's license plate cutout, the rear bumper with the optional silver-painted section, the slimmer headlights, the grille, and lower front bumper. Every trim except the base L has projector-beam LED headlights and fog lights, while prettier LED running lamps are for the higher trims: Limited and Platinum. Big 20-inch wheels are also new for the Highlander, and only on those top two trims. Some new paint colors, like the Blueprint on our Limited test car, are the most attractive part of the entire vehicle. Bad? Never, just boring.

Toyota put time and attention into the Highlander's cabin, where quality fit and finish rule the day. Silver-painted accents running along the armrests, three-spoke steering wheel, and chunky gear selector highlight the curves and angles, while an 8-inch touchscreen and climate controls finished in polished black plastic appear to float above the multi-layered dash. The color palettes are pleasing, even on the L trim's fabric seats. The Limited has a three-tone interior. Our test car had brown on the upper dash, lower dash, and door panels; beige on the seats, center console, and middle dash; and black on the steering wheel and footwells. Padded surfaces and rich textures are everywhere except the middle portions of the door panels, but take note: You won't find this level of detail and quality in any of the Highlander's competitors, such as the Ford Explorer or Honda Pilot. The only interior this nice is in the Kia Telluride. The leatherette has a perforated texture within the shelves below the air vents, and on the Platinum, the seat backrests have diamond quilting. It'd be nice if the exterior styling were as inviting as this interior—hence a slightly lower score—but the Highlander is really nice where it counts. 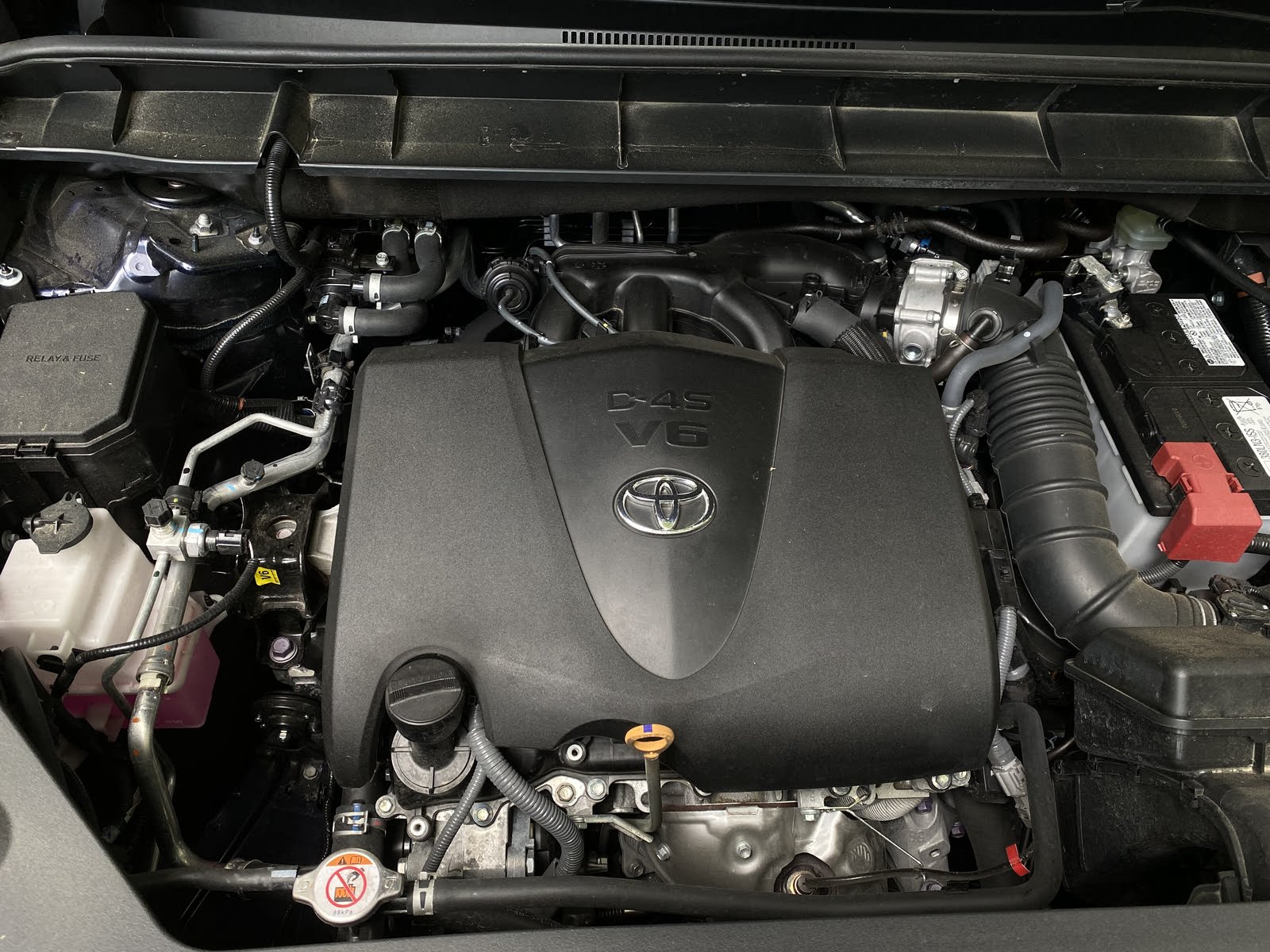 The Highlander comes with a 3.5-liter V6 engine in either front-wheel drive (FWD) or all-wheel drive (AWD). Unlike competitors that have turbochargers and four-cylinder engines with smaller displacements, this large V6 delivers brisk acceleration without any labor. It's also the powertrain in the Lexus RX, so that means it's smooth and practically silent at idle. The eight-speed automatic transmission makes full use of the engine's 295 horsepower and 263 pound-feet of torque, though it takes a heavy foot to initiate a kickdown. It's a lazy lump, just like a Mercedes V6, but when prompted it'll hustle to speed.

What knocks the Highlander down a couple pegs are loose steering that requires adjustments to center the car at highway speeds and a soft suspension with too much rebound. This is what most Highlander buyers want, but we expected better control since this Highlander is on a brand-new chassis (shared with the Toyota RAV4) that is stiffer and stronger. We also expected Toyota, which has far more experience tuning a chassis than Kia had with its rival Telluride, to dial in the suspension's dampening and provide even a modicum of steering feel. As such, the Highlander bobs and floats like an older Buick at speed. Its size and weight are always apparent, which doesn't inspire confidence when tasked with shuttling around five or six other people. (Loading down the vehicle with more people and cargo would probably help the ride in this regard.)

The benefit, so long as you're conscious of the Highlander's limitations, is the ability to drive the vehicle with no more than a feather's touch. Every input is muted, including the long-travel brake pedal, and every output is muted even more. It's a wonderfully isolating experience that calms you down on long road trips and allows you to arrive refreshed. That's the Lexus way, and this cushy Toyota will at least inspire you to stay in the right-hand lane and calmly cruise at 65.

On the Limited and Platinum trims, Toyota includes torque vectoring on the rear axle for AWD models that can tighten the car's trajectory around turns. It also includes selectable driving modes that alter the response of the throttle, transmission, and steering and includes two off-road modes for sand and mud, not that a Highlander on street tires would do well in either situation. Selecting Sport does help with the Highlander's vague on-center feel, but not enough to make this the default mode.

Fuel economy is very good for such a large vehicle. The Highlander FWD is EPA rated at 21 mpg city, 29 mpg highway, and 24 mpg combined. With AWD drivetrain, it's 20/27/23. The Highlander hybrid, which is reviewed separately, can achieve fuel efficiency up to 36 mpg combined—also stellar. Helping matters is an auto stop-start that won't shut the engine off when you're light on the brake pedal and has a customizable setting that lets you extend the time by turning down the climate control. Having this choice is rare and it's very good in practice. 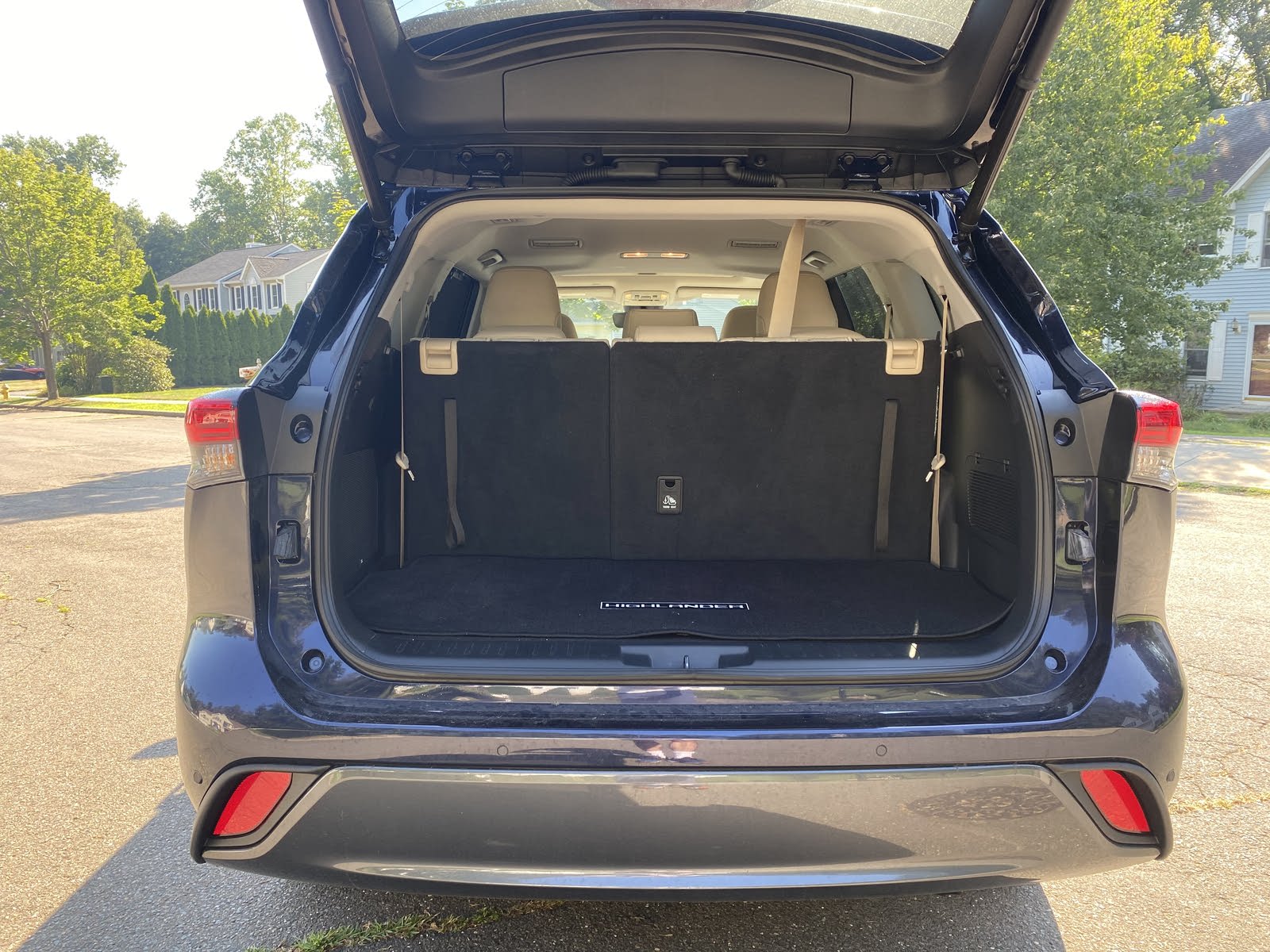 The Highlander seats eight, or seven with the second-row captain's chairs standard on Limited and Platinum trims and a no-cost option on the XLE. A few second-row notes while you're shopping: The Platinum model comes exclusively with the captain's chairs, the L and LE trims are bench-only, and the Limited has a no-cost option for the bench. In any configuration, the second row seats are supremely versatile, with generous fore/aft and reclining adjustments. The amount of legroom is kingly. Pull a lever on either the backrest or on the cushion to move and fold the seat partially for easy access to third row seats—easy, that is, if you're well under six feet. Pull another lever and the seat folds flat. The rear doors open very wide. Ingress and egress are exceptional. The front-seat height and the rear-seat height allow everyone to slide into place without stepping up or ducking down. If you or your family has weak knees, you'll appreciate the Highlander's ergonomics.

Three-zone climate is standard. Upper trims have a 120-volt outlet for the rear, plus side window shades and a heated second row. Only the Platinum comes with the large panoramic moonroof. Cargo space is generous, too, with 16 cubic feet behind the third row, 48 cubic feet behind the second, and 84 when both are folded. Six tie-down hooks help secure loose items, while the hybrid has a second 120-volt outlet in the cargo area.

The eight cupholders and four bottle holders are great, but better are the two shelves integrated into the dash. The center shelf can fit large phones and has a pass-through to route cables below so they don't get in the driver's way. The only downside on Highlander models with wireless charging is that the pad blocks the cubby under the center armrest. Whenever you want to reach inside, you have to move this bulky chunk of plastic out of the way, and any phone placed on it.

Controls are simple and very legible, including analog buttons and dials surrounding the standard touchscreen. The infotainment interface is also simple to use and quick to respond, though it could use a software overhaul. 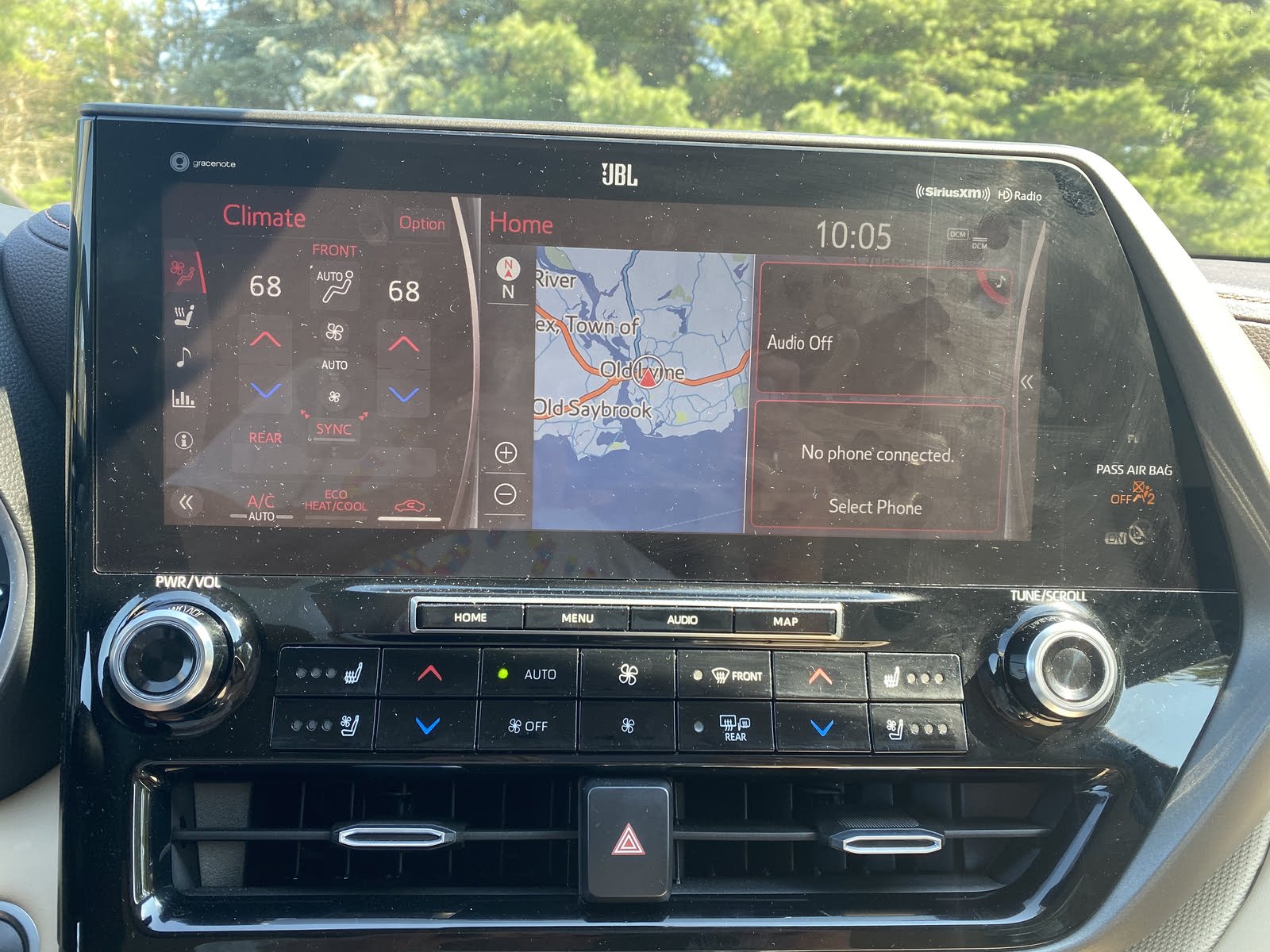 Even though this is a new Highlander, Toyota still hasn't run its infotainment system through the wash in what feels like a decade. The maps aren't as detailed as competitors, there are no onboard apps (you have to use a connected phone in a slow, convoluted process), and the screen and 360-degree cameras are low-resolution. This criticism goes for the 12.3-inch touchscreen that was optional on our Limited and standard on the Platinum. You can never use the full 12.3 inches to show maps or adjust vehicle options. Instead, the climate and info about fuel economy and driving modes are always present, whether you want them or not. That means the big screen has no more of a usable area than the 8-inch touchscreen. Apple CarPlay, Android Auto, and integration with Amazon Alexa come standard. Look at how GM, Fiat Chrysler, and Hyundai structure their menus and design their interfaces—it makes the Toyota system look bad by a long shot.

What saves the Highlander, especially on upper trims, is a large 10-inch head-up display and another large 7-inch display in the instrument cluster that are both crisp and full of useful information to augment the main display. The semi-automated driving system is also very good at tracking marked highway lanes and slowing for traffic. Adaptive cruise control, road sign detection that can show stop signs on the instrument panel, and automatic high beams come standard. The optional JBL audio system has 11 speakers and is decent, but not sensational. SiriusXM, HD radio, WiFi, and four USB-A ports are standard, along with a one-year trial for Safety Connect, which includes a stolen vehicle locator and emergency crash notifications to a 24/7 call center. Trims with factory navigation have three years of included traffic data and the ability to monitor the Highlander's location and control certain features, like the remote engine start, from a smartphone or smartwatch. 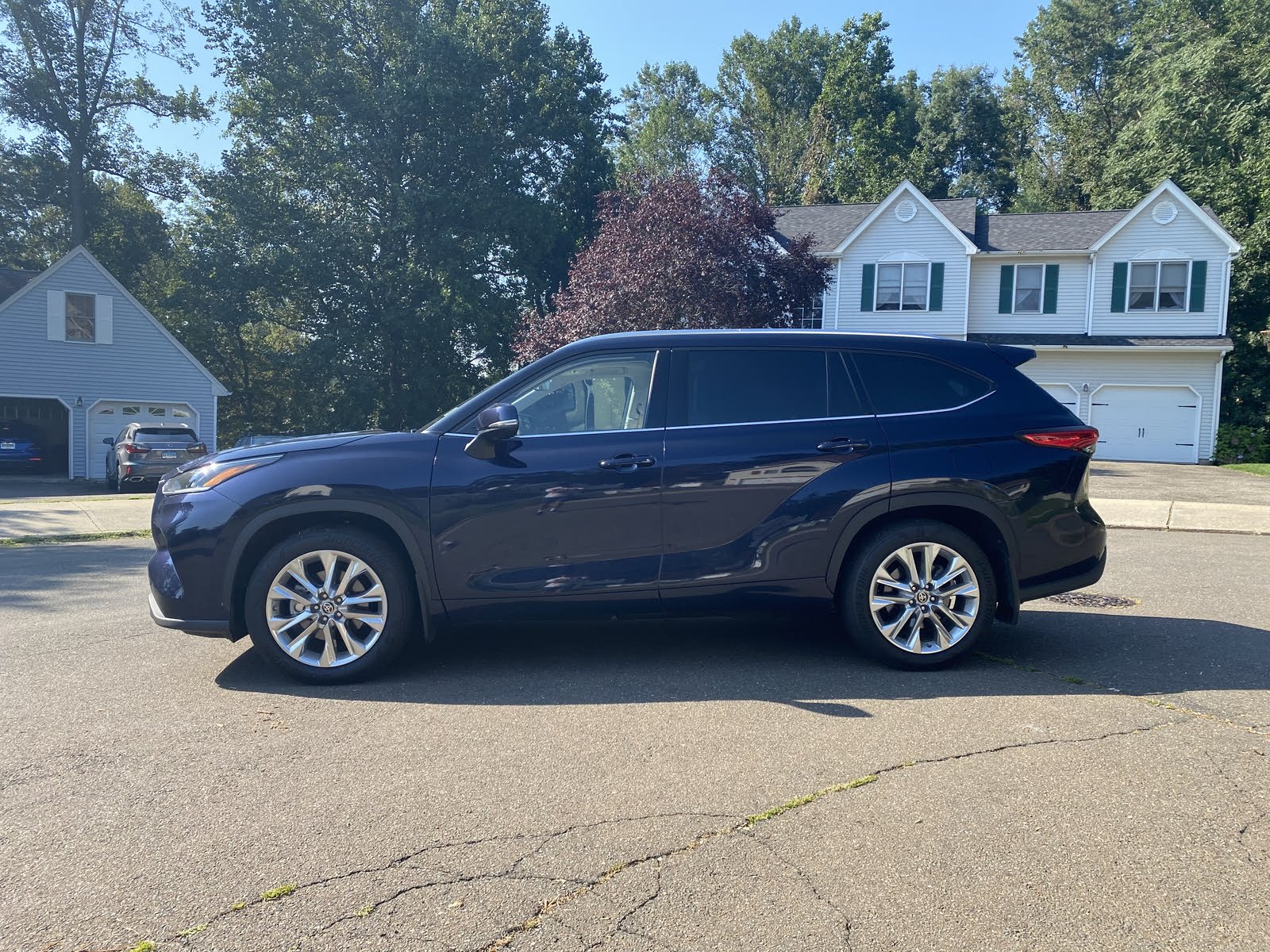 The National Highway Traffic Safety Administration (NHTSA) has not yet rated the 2020 Highlander. The Insurance Institute for Highway Safety (IIHS) awarded it a 2020 Top Safety Pick for scoring the top rating in all six crash tests, the optional headlights, and for emergency braking when tested against cars and pedestrians. 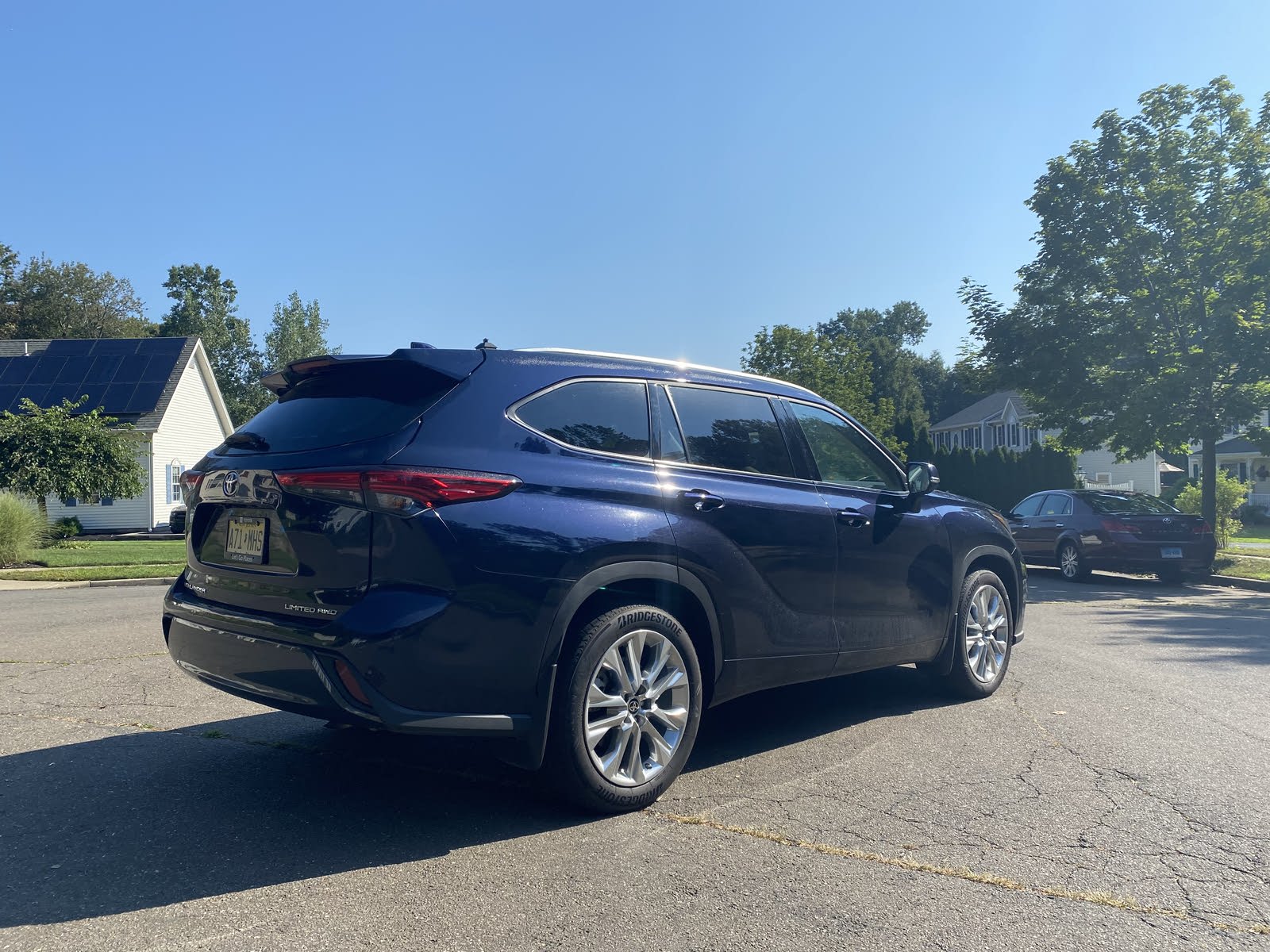 The 2020 Highlander starts at an MSRP of $34,600 for the base L. Of the five trim levels, the XLE is the best value in the low $40,000 range. Our Limited tester was $47,825. Fully loaded with extra-charge paint and destination, the Highlander tops out at $50,400—a very sound value considering how it drives and feels like a Lexus 100 percent of the time. Toyota includes two years of maintenance and roadside assistance. While the Highlander should handle better for a brand-new SUV, its quality, breadth of technology, and comfort more than make up for its shortcomings.

What's your take on the 2020 Toyota Highlander?

Richard Does it have rain-sensing wipers?

Richard Does the 2020 Highlander have rain-sensing wipers?

GuruRYV77 Kyree, your cargo specs are wrong on the Pilot. Both SUV's have approximately the same capacity. 83.7/83.9.

GuruYQ35S does the 2020 come with captain chars?

Have you driven a 2020 Toyota Highlander?
Rank This Car

2020 Highlander Locked With Fob Inside

My 2020 hybrid highlander locked by door button with key fob inside. Had to call for second key fob to unlock. I thought there was some mechanism to prevent this. Anyone?

276 views with 1 answer (last answer about a year ago)

Does the back glass open on the new 2020 Highlander?

966 views with 3 answers (last answer about a year ago)

I found a piece of plastic in my car today and I baby seem to see where it goes. It looks like it belongs on a door or something I've attached a picture with this if anyone has a similar problem. I...