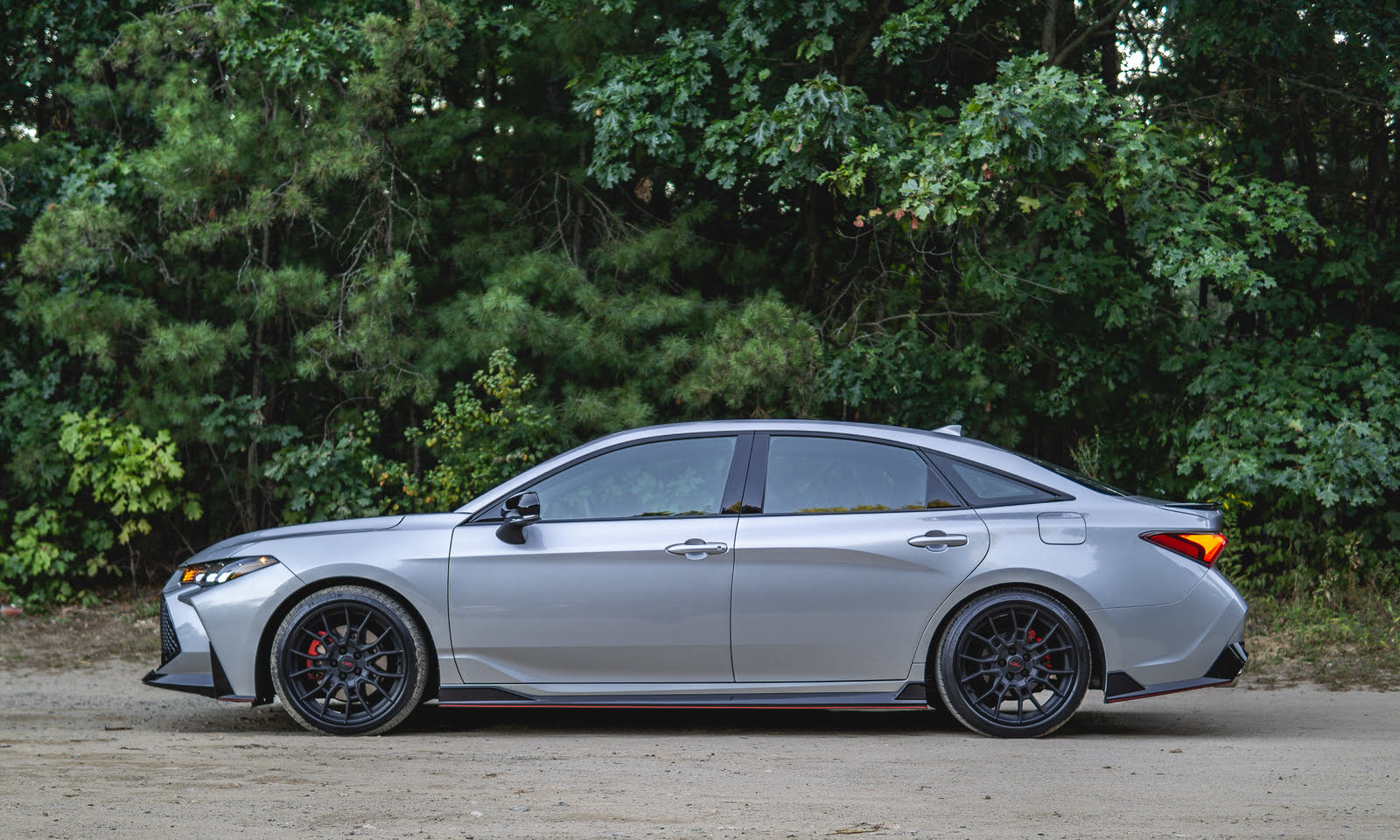 The Toyota Avalon marks its 25th birthday in 2020. Always an outlier in the Toyota lineup, the Avalon was overshadowed by the Camry and Prius, and in recent years by Toyota’s crossover SUVs. But the move to the TNGA (Toyota New Global Architecture) platform in 2019 with the start of a fifth generation of production has revitalized Avalon, and set it on the road to a new future. 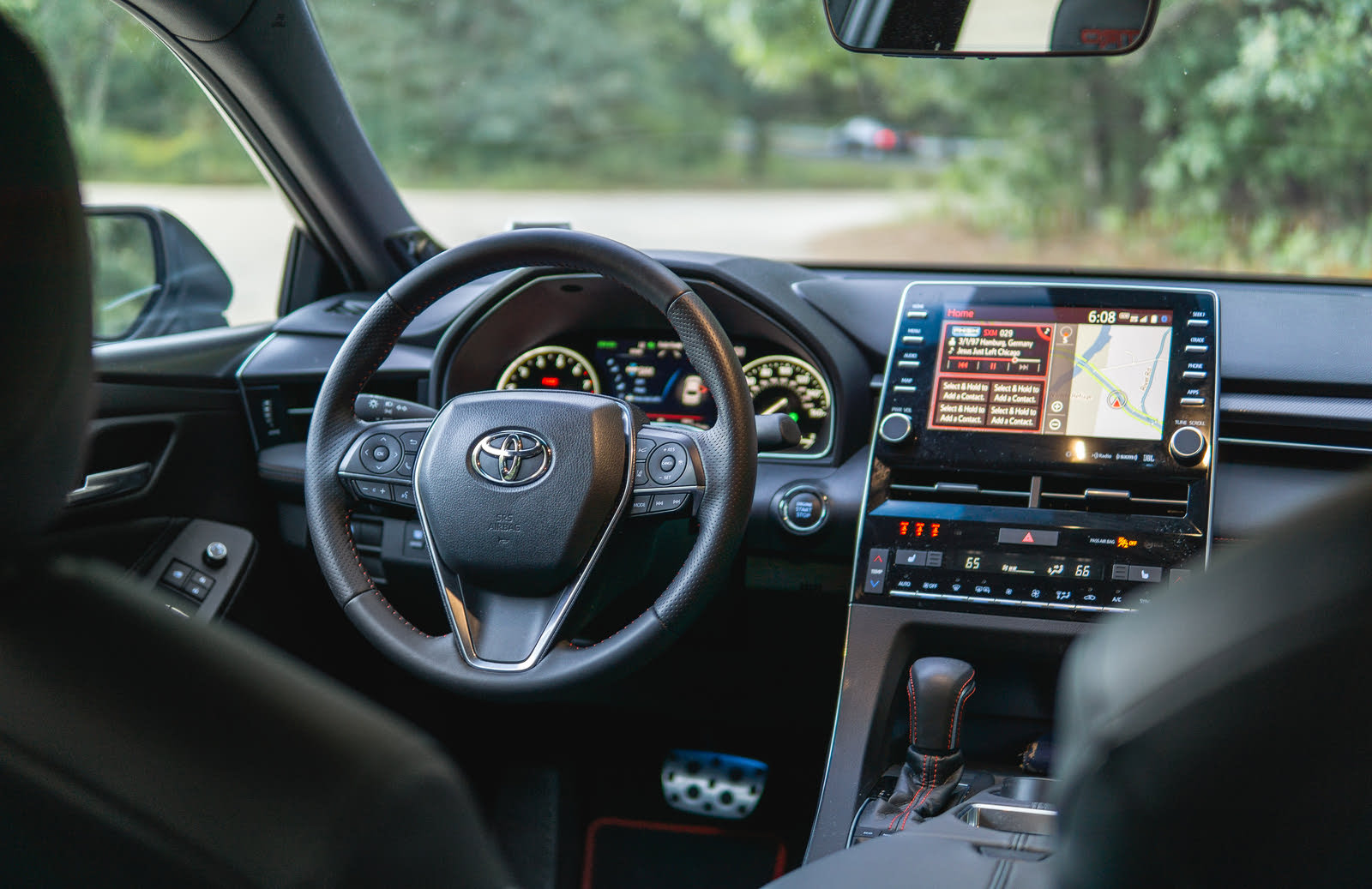 Previous generations of Avalon could be described kindly as stately and conservative. The 2020 Avalon is much sharper, crisper, and more athletic. The four-door notchback sedan has a low, swooping roofline that ends in a short deck, looking almost like a fastback in profile. Along the body sides, a high beltline dives into the rear door, while a shoulder line picks up in the middle of the front door and leads the eye all the way back to the tail, while yet another interesting body line complicates the rocker panel, connecting the big wheel arches. Designers often insist a generous axle-to-dash distance is critical to conveying elegance in an automotive profile, and the Avalon achieves this dimension—and looks quite elegant, with a long hood, too.

Between a pair of expressive twin LED headlights, Avalon gets a big, wide mouth grille highlighted by a big chrome Toyota logo.

Inside, the Avalon delivers a near-luxury look and feel, with a layered dash that looks like it is made up of stacked horizontal elements, each of a different material. HVAC outlets are cleverly integrated into one layer of the dash—a very nice touch. The center stack rises up from the center console like a piece of freestanding furniture, with the 9-inch color touchscreen seamlessly built into the top, right where it belongs. Without trying too hard, the Avalon is modern and attractive, elegant and still appropriately conservative.

Like all Toyota products, the Avalon is built and finished at a commendable level, and material choices throughout the cabin are of good quality and feel. There are a few trim pieces and bezels that are chromed plastic when additional polished aluminum might have looked and felt better—but that’s to be expected in a car that’s a Toyota, not a Lexus. 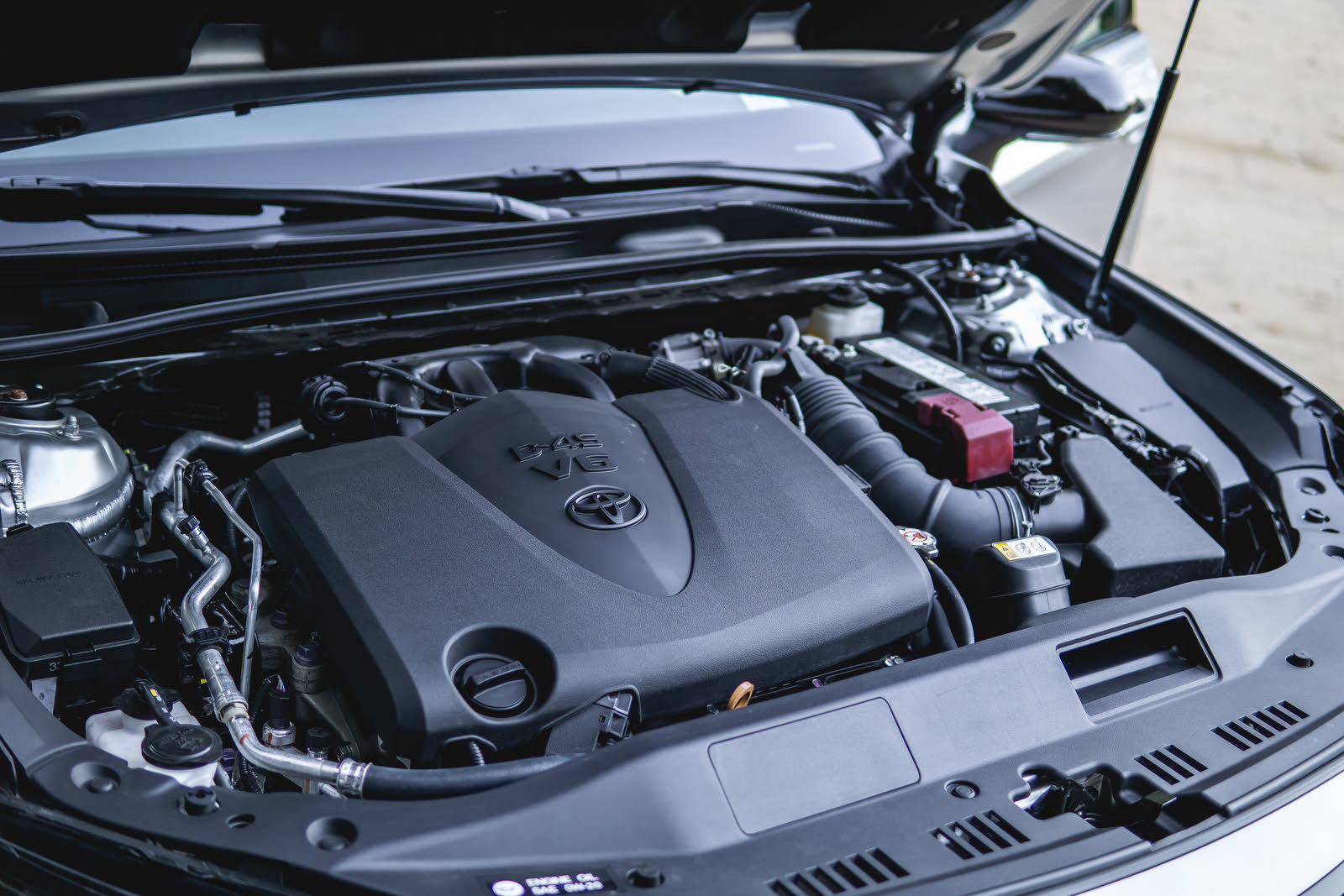 Toyota doesn’t quote 0–60 mph times, but the Avalon feels like it has some get-up-and-go, probably under seven seconds for the sprint, considering its curb weight (3,560 – 3,704 pounds, depending on trim) and slippery coefficient of drag (0.27).

Once at speed, the Avalon cruises like a dream on the highway, with a smooth and quiet ride. The pleasant surprise is that Avalon doesn’t mind a little back-road romp. Four-wheel independent suspension (MacPherson strut front/multi-link rear) with dual stabilizer bars do a nice job of swallowing up the bumps. An adaptive suspension system is standard on the Avalon Touring trim level, and TRD track-tuned coil springs are standard on the Avalon TRD, though we didn’t get to test either of those setups for this review. The Avalon’s rack-and-pinion steering system gets electric power assist with good feel and response, and 12-inch front ventilated disc brakes (12.9-inch on the TRD trim) and 11-inch solid disc brakes on the rear do the job with standard anti-lock braking (ABS).

The Avalon is not a sports sedan, even though the TRD trim level is available, but neither is it a boring sedan to drive. 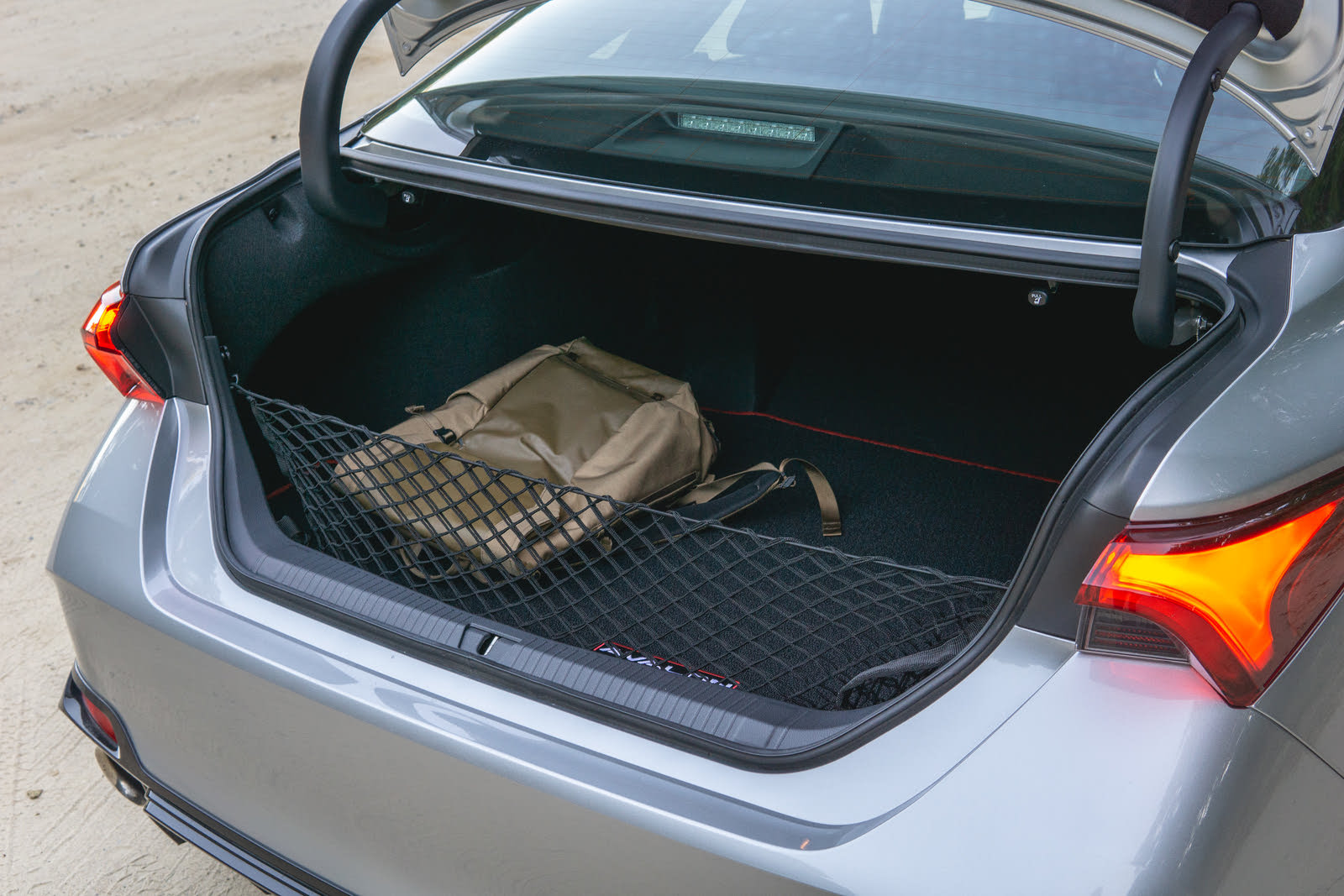 One of the reasons to step up from a Toyota Camry to an Avalon, despite the fact that the two sedans ride on the same TNGA platform and can be ordered with identical powertrains and very similar levels of equipment, is that the Avalon is marginally larger inside and out than the Camry.

While a few inches might not seem important, think about the difference an inch or two makes in a pair of pants—they either fit or they don’t. Thanks to its 113-inch wheelbase (versus the Camry’s 111-inch wheelbase), Avalon has a generous 40.3 inches of legroom in the back seat, almost two inches more than the Camry. That can be the difference between a second-row passenger sitting comfortably on a long drive or feeling cramped. The same goes for Avalon’s extra few inches of shoulder and hip room.

When it comes time to load up the trunk with supplies for your road trip, the Avalon has cargo space for 16.1 cubic feet of junk (again, 1 cubic foot more than the Camry). 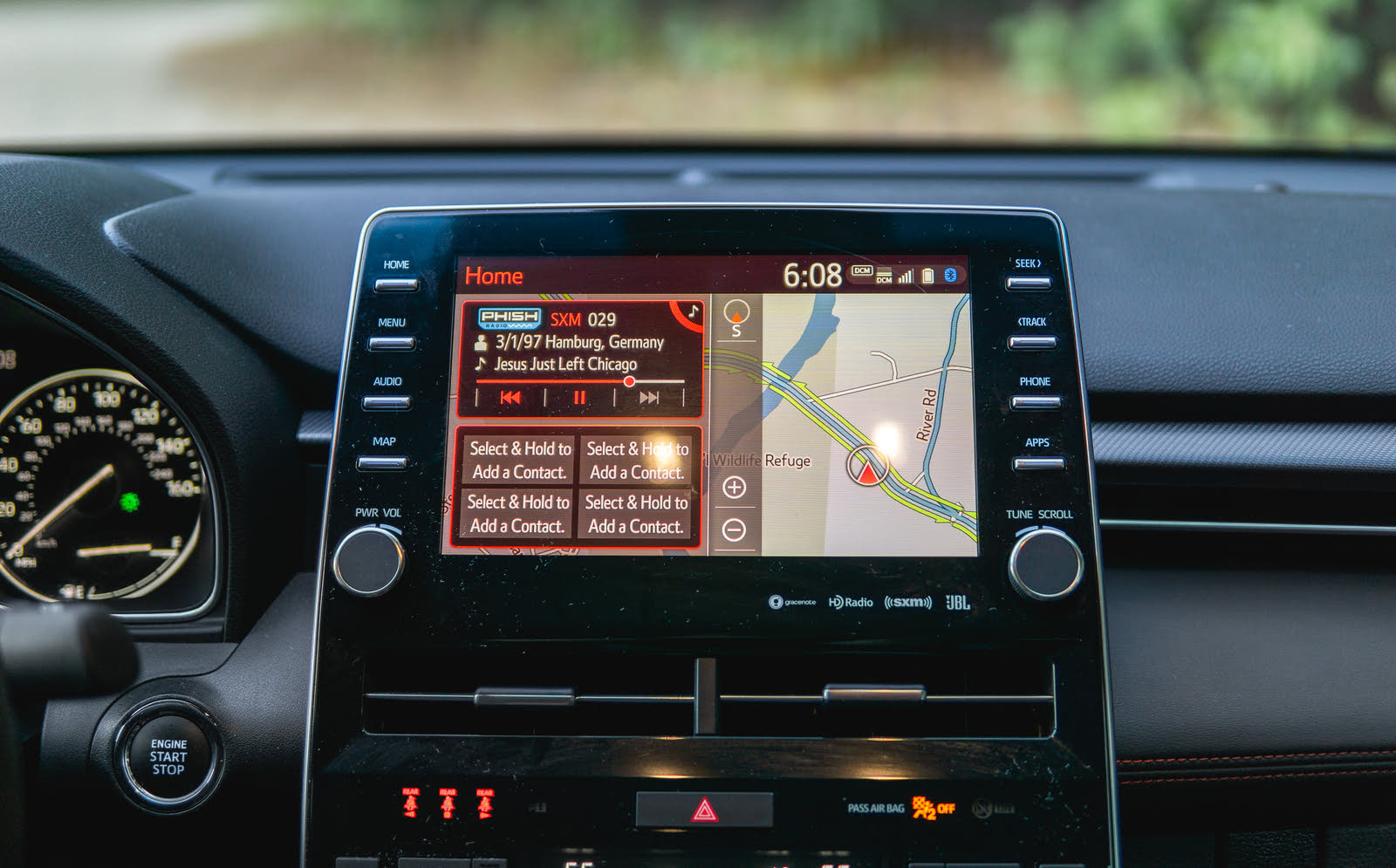 Do you hear those bells ringing from Cupertino? That’s because Apple CarPlay is finally standard on a Toyota vehicle, having debuted on the Avalon in 2019. Toyota’s infotainment interface, Entune, is still a standard feature, but having Apple CarPlay with a wired USB connection frees you from Toyota’s navigation app (Scout GPS Link), which is inferior to the apps that you can use with your iPhone. The Amazon Alexa In-Car App is also standard, as is Siri Eyes Free. Android Auto, curiously, is not available.

The standard audio system on XLE, XSE and TRD trim levels uses a 9-inch touchscreen interface and eight speakers. The standard system on the Avalon Touring and Limited (optional upgrade on XLE, XSE and TRD) is Premium Audio, Dynamic Navigation and JBL with Clari-Fi. Accessed through the same 9-inch touchscreen, the premium system comes with 14 speakers and 1,200 watts of amplification. A six-month trial of Verizon WiFi Connect is included with all Avalon models.

Avalon gets four USB ports plus one 12-volt power outlet, which should help to keep devices powered up. 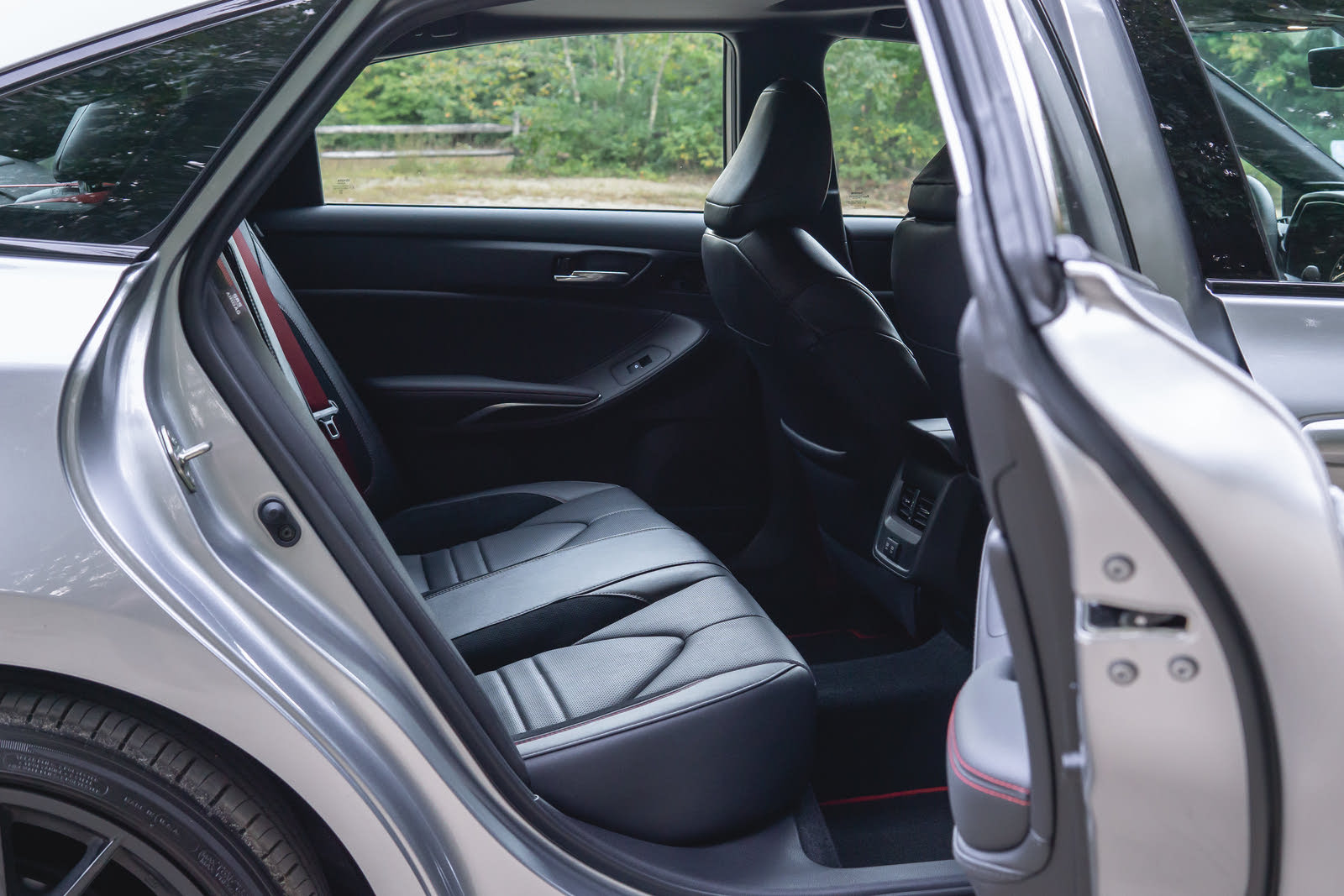 Toyota’s commitment to safety runs up and down its lineup, and the Avalon benefits from the full range of features as standard equipment. The Star Safety System, which includes stability control, traction control, anti-lock braking, electronic brake-force distribution, brake assist, and Smart Stop Technology, is just the start of it. The Avalon also gets 10 airbags, driver and front passenger whiplash-injury-lessening seats, LATCH anchors for outboard rear seats, a tire pressure monitoring system with direct pressure readout and more.

The Insurance Institute for Highway Safety (IIHS) gave the Avalon its highest “Good” rating in all crash tests and other safety categories, except headlights on XLE and XSE trim levels, which were rated “Poor.” It received “Superior” (highest rating) for Front Crash Prevention, and “Good +” for LATCH ease of use. The National Highway Traffic Safety Administration (NHTSA) awarded Avalon it’s full five-star safety rating for 2020. 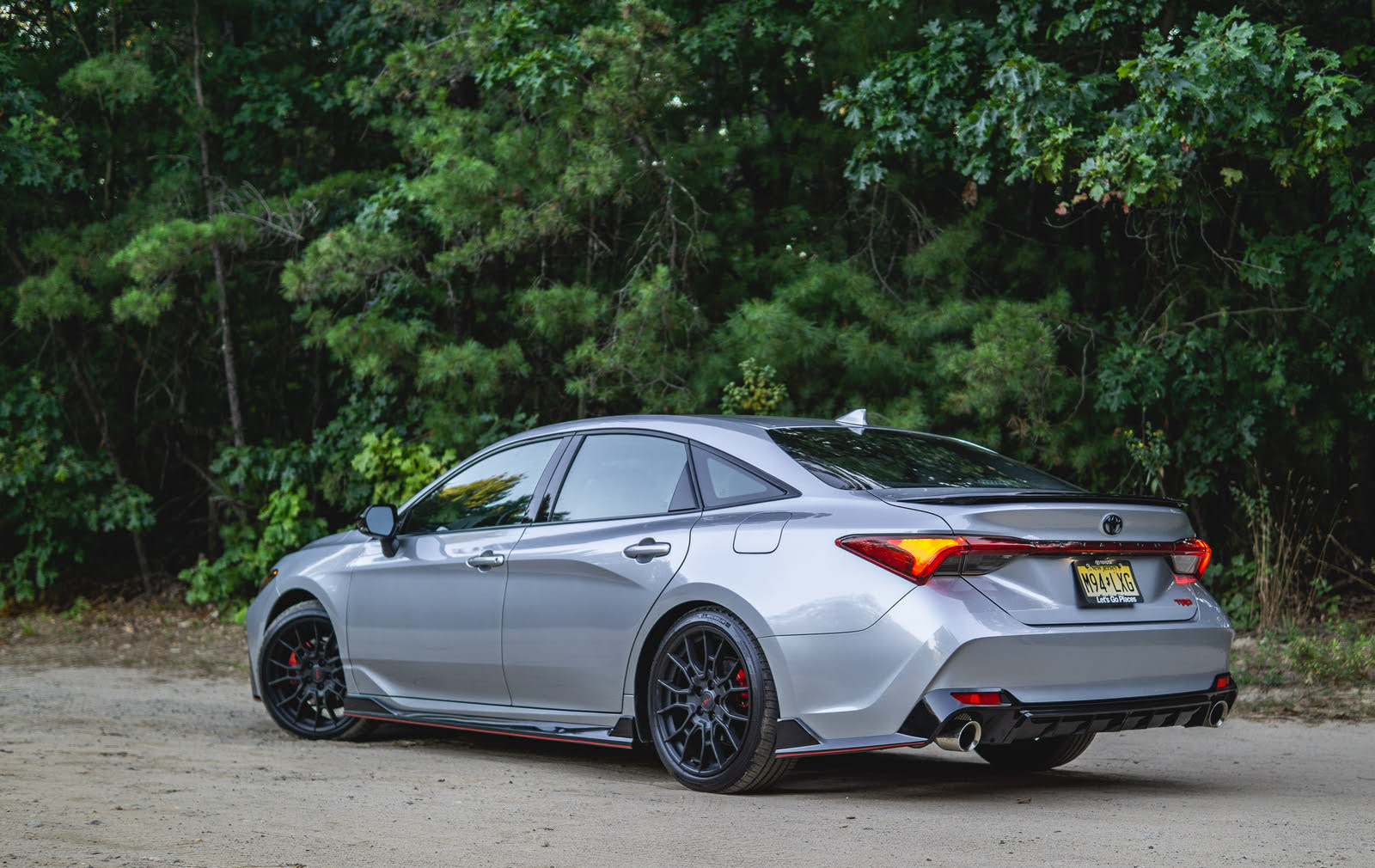 The competition in Avalon’s class—technically midsize sedans according to government classification—has thinned somewhat but is still formidable. The Nissan Maxima (starting at $34,450), Buick Regal Avenir (starting at $35,770), Chrysler 300 (starting at $30,040), Chevrolet Impala (starting at $31,620), Kia Cadenza (starting at $37,850) are reasonable points of comparison, but really, buyers should probably measure Avalon against Toyota’s own Camry and corporate sibling Lexus’s ES, both of which share a platform and a lot of mechanical parts with Avalon, and represent bookends to it. A Camry can be picked up for as little as $24,425, while the ES starts at $39,900. The question then is whether to save money and get a little less, or spend a little more and enter the premium class.

Buyers who are not particularly status-conscious may be perfectly content with the 2020 Toyota Avalon—and will drive happily in the knowledge that they’re riding on the same platform as their luxury-minded friends (only with a few extra dollars of cushion in their pockets).

kachmor I would like an expert review of the 2020 Avalon TRD trim with its 19 inch wheels. Does it ride and corner as well as the 2019 Limited with 18 inch wheels. In other cases owners report a less comfortable, even less quiet vehicle when outfitted with larger wheels. Thank You.

GuruHR3QH the 2019 Avalon does not have a lockable glove box or a valet lock for the trunk (meaning the trunk cannot be made to be unopenable when the cabin is open. are these problems resolved for the 2020 model? -- Peter

kachmor Customers are obviously aware of the irritating shortcomings of the 2019 Avalon. Additional features for your reviewers to notice include, improved open door stops at better intervals and strong enough to withstand light slope gravity. Right now passengers need help with their doors and drivers must adjust the door to half closed when getting in. Otherwise it is very hard to get doors properly closed. There must be some successful tricks in managing Entunes 3.0. Right now, when it is called up it is very hard to dismiss and return to Apple Carplay, which is preferable but not prioritized by default. It is obvious that you do not provide lists of feature shortcomings for your reviewers. A professional approach would be more respectful of your clients.

kachmor The center console is unnecessarily narrow. There is no good place to set an iPhone and see it while driving. I have constructed a contraption for mine reaching up from the lower dash on an extension to rest level just the left of the charge area (which I have not been able to make work on my Apple Watch).

kachmor Sorry, each of my posts should repeat that my basis is a 2019 Avalon Limited. I am interested to see if Toyota has dealt with specific owner reported shortcomings. The feedback loops appear to be random. car gurus can help by tracking the responsiveness of manufacturers.

GuruNVX3L I purchased AVALON XLE 2019 and it has a lot of shortcomings, when I compare with Nissan, which I drove for last 5yrs. If given a chance I would go back to Nissan, for sure.

Have you driven a 2020 Toyota Avalon?
Rank This Car

what type of fuel grade ( like 87 etc. ) does the Toyota Avalon take?

180 views with 3 answers (last answer about a year ago)

Any way to turn off warning icy road