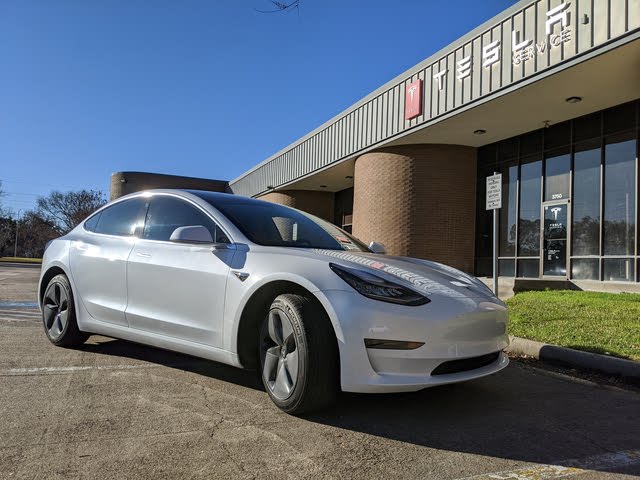 As Tesla’s small car, the Model 3 fills a hugely important role for the brand. It must concurrently shine the light into the future of EVs while remaining within financial reach of most families. And while it largely succeeds at achieving those milestones, its upper trims, when fully optioned, creep well beyond the average price of a new car in the United States. Still, every Model 3 embraces most of Tesla’s identifying features and looks like a Tesla from the outside.

Inside, the Model 3 looks toward the future of simple design. It shares its glass roof with the Model S, and the 15-inch horizontally oriented touchscreen that manages nearly every secondary control yields a spartan yet futuristic look unlike anything else sold today.

The Model 3 comes in three trims: The Standard Plus trim comes with rear-wheel drive (RWD), and dual-motor Model 3s have all-wheel drive (AWD) and come in Long Range and Performance trims. Tesla claims 322 miles of range are available in the dual-motor models, while the standard trim offers a claimed 250 miles of range. Tesla says up to 172 miles of range can be replenished in 15 minutes at any of its supercharging stations, which are available around the world. Expect much slower rates for home charging. And unlike the Model S and Model X, drivers of the 3 must pay for supercharger use. The EPA rates the Model 3 between 113 and 141 miles-per-gallon equivalent, depending on its configuration.

The National Highway Transportation Safety Administration gives both the RWD and AWD versions of the Model 3 a 5-star overall crash test rating, its highest honor. The Insurance Institute for Highway Safety gives it a Good rating, its highest score, in all six of its crashworthiness categories. The Model 3 uses the same battery-in-floor construction as the larger and more costly Model S sedan to achieve a low center of gravity and enable above-average cargo space for a car in this segment.

Tesla’s Autopilot driver-assist system can accommodate automated driving on freeways between on- and off-ramps, according to the company. All Teslas come with the hardware for full self-driving capability on surface streets, but enabling it is a $7,000 option. Expect the system to be subject to both hardware limitations and good judgement.

While other EVs that are similar in size, cost, and range to the entry-level Model 3, most simply aren’t as nice. Chevy’s Bolt EV, as well as the Kia Niro EV and Hyundai Kona Electric, costs about the same, but none of them offers the Model 3’s combination of svelte looks and from-the future feel.

Is the polestar all electric, 2020 models

How To Rate A Seller?

I have a complaint about the car dealer who was trying to sell me the Tesla Model 3 on your inventoryListing=289504561. I cancelled my purchase the same day I signed (on Saturday Jan 9) because I fo...