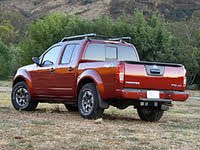 Though most of the 2020 Nissan Frontier is well beyond its expiration date, a new powertrain combined with the aged midsize pickup’s honest simplicity is almost appealing enough to recommend it. There’s just one big problem. 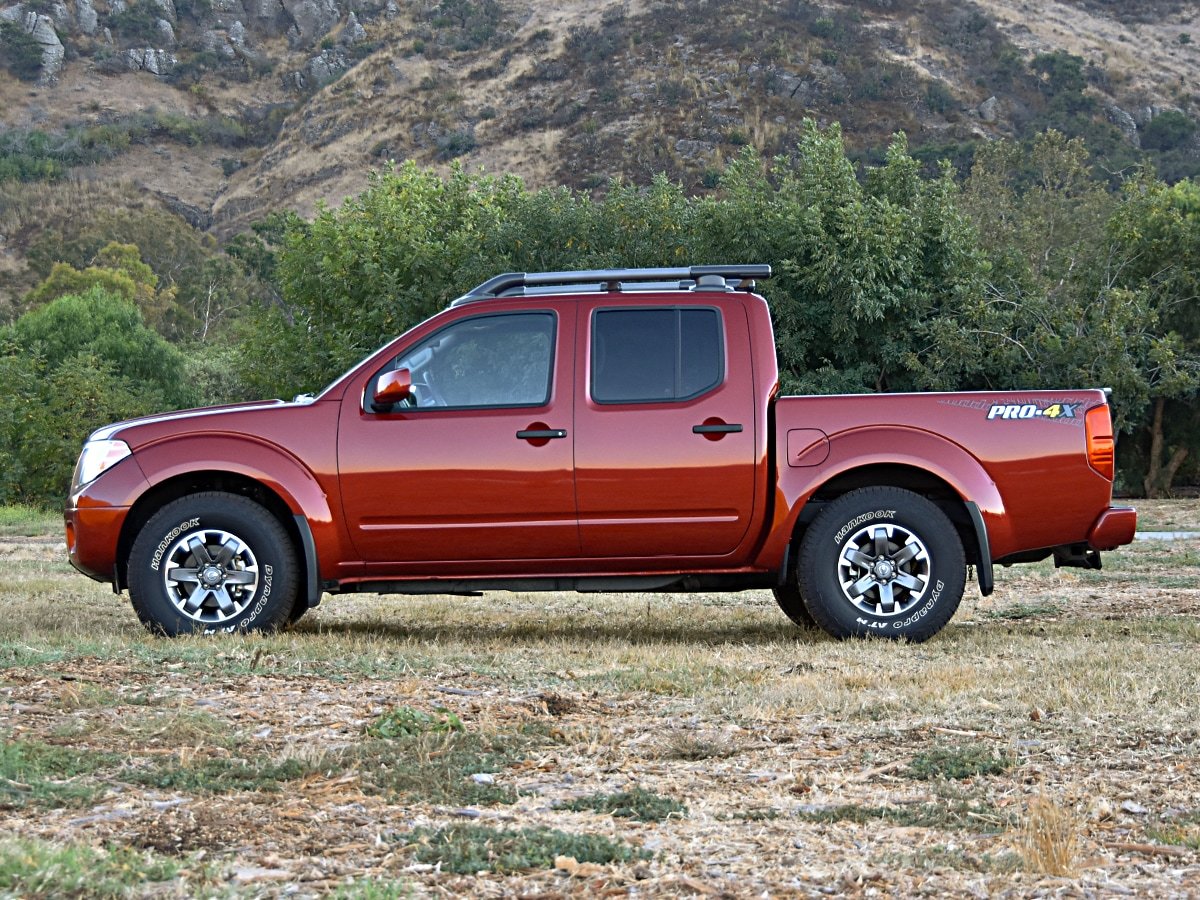 Nissan is celebrating the Frontier’s Sweet 16 this year, but this is not a coming-of-age milestone. Rather, it’s a long-overdue retirement party. And the Frontier is going out with a bang thanks to a brand-new engine and transmission that give a preview of what the next-generation Frontier has in store. Just make sure you don’t get into an accident, or you’ll get pretty banged up yourself. 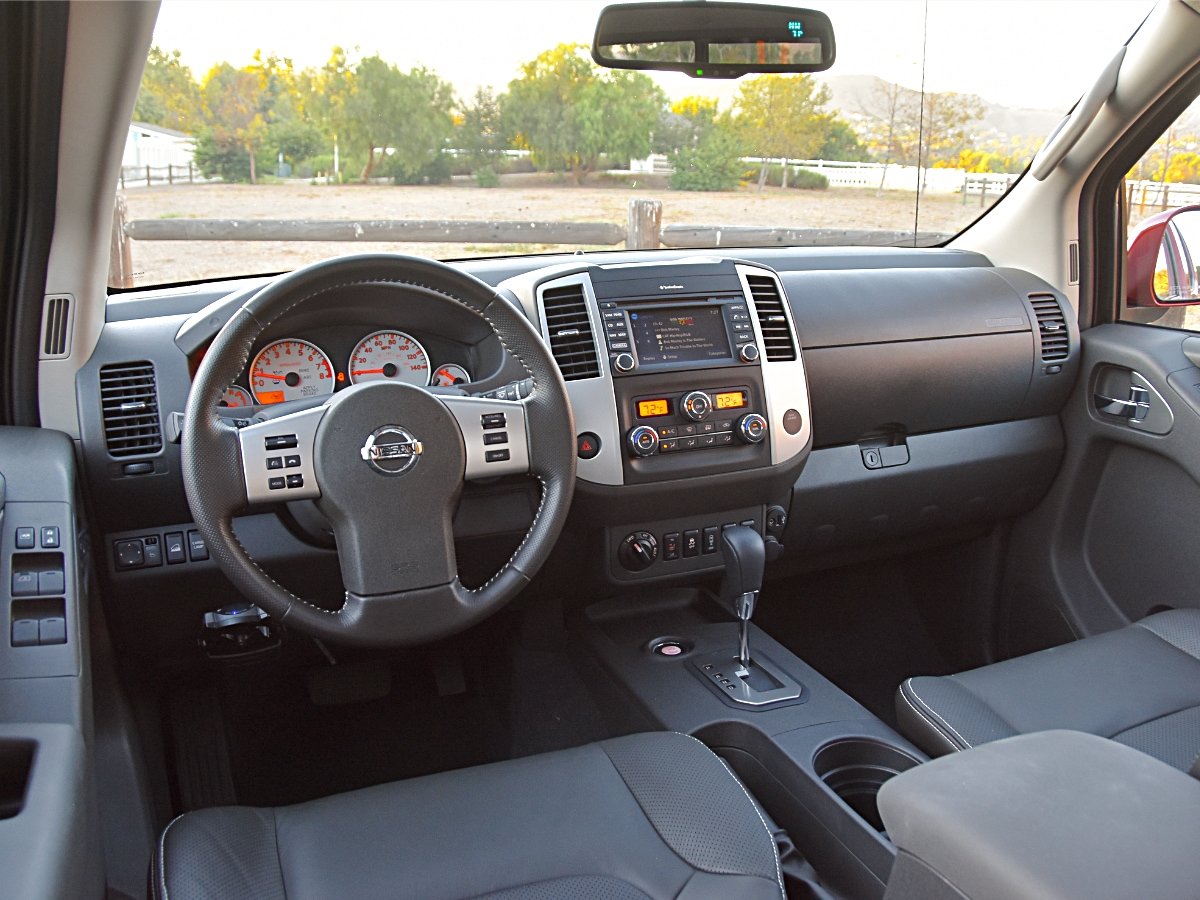 Nissan offers the 2020 Frontier in King Cab (extended cab) and Crew Cab styles. King Cabs have a long cargo bed and are available in base S and mid-grade SV trim levels with rear-wheel drive (RWD) or four-wheel drive (4WD). Upgrades include a Value Truck Package with the SV trim.

Crew Cabs offer a choice between short and long beds; S, SV, and PRO-4X trim levels; and RWD or 4WD. With the SV trim, you can opt for a Value Truck Package, a Midnight Edition Package, or a Special Edition Package. Each trim is also available with a Utility Package. Our test truck was a Frontier PRO-4X Crew Cab equipped with a set of floor mats, and it came to $38,745 including a $1,095 destination charge.

Stepping into the Frontier’s cabin is like peering into a portal to the past. Anyone familiar with Nissan interior design of mid-2000s will be transported back to a time when symmetry, modularity, and silver plastic defined the way the company’s cars, trucks, and SUVs looked on the inside. And while almost everything but the PRO-4X’s leather upholstery is rendered in hard plastic, the Frontier is screwed together with remarkable solidity.

Seriously. No matter the road surface, there wasn’t a squeak or a rattle to be heard. Guess that’s what happens when you build the same thing day in and day out for more than 300,000 days in a row. 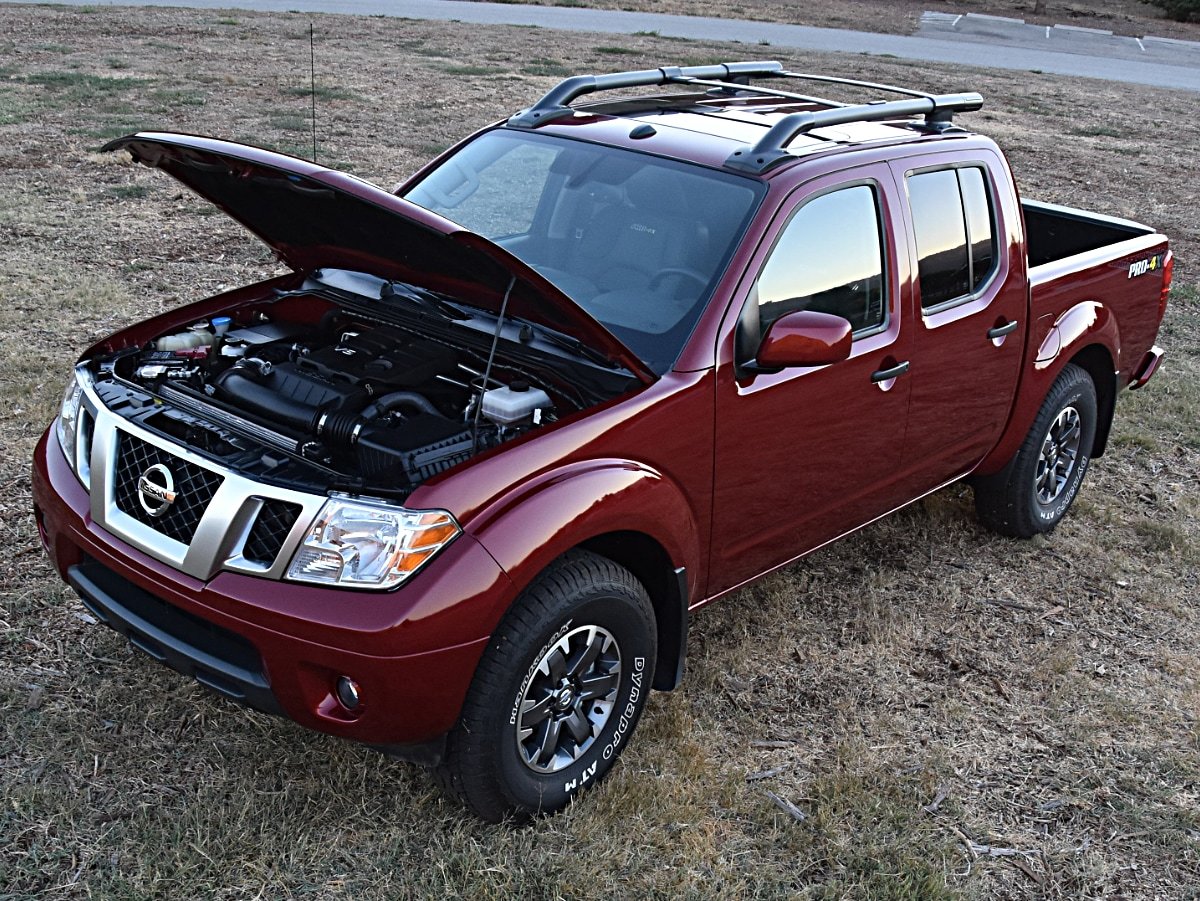 A completely redesigned Frontier is coming, and soon. But since that truck’s mostly-new 3.8-liter V6 engine and nine-speed automatic transmission were ready to rock ahead of time, Nissan plugged ‘em into the old truck to whet the appetites of midsize-pickup fans. The new engine replaces both the old 4.0-liter V6 and 2.5-liter four-cylinder, and the new nine-speed automatic is now the only available gearbox (the previous manual transmissions have been dropped).

Compared to the previous engine, which was definitely rough around the edges, the new 3.8-liter is remarkably smooth and refined, and the nine-speed automatic makes excellent use of the power. Acceleration is strong, the transmission delivers quick and clean shifts, and the drivetrain supplies robust response down low while freely revving high. We averaged 19.3 mpg on our testing loop, beating the EPA estimate of 19 mpg in combined driving.

The rest of the Frontier’s driving dynamics aren’t quite as impressive. The four-wheel disc brakes posed no problems, but the steering was both slow in response and heavy in effort level, and the turning radius was mighty wide.

High-pressure Bilstein off-road shocks are standard with the Frontier PRO-4X, and they soaked up everything from trail ruts to school-zone speed humps. But they also allow most road surface irregularities to shimmy up into and reverberate throughout the truck’s pasta al dente structure. And over larger bumps taken at speed, the Mississippi-built Frontier threatens to do the Texas Two-Step.

By modern standards, the 2020 Nissan Frontier drives like the 16-year-old it is. But at the same time, this character is a part of its charm and it really didn’t bother us one bit. Trucks that drive like trucks are a good thing. Especially when they’ve got a terrific new powertrain like the Frontier does. 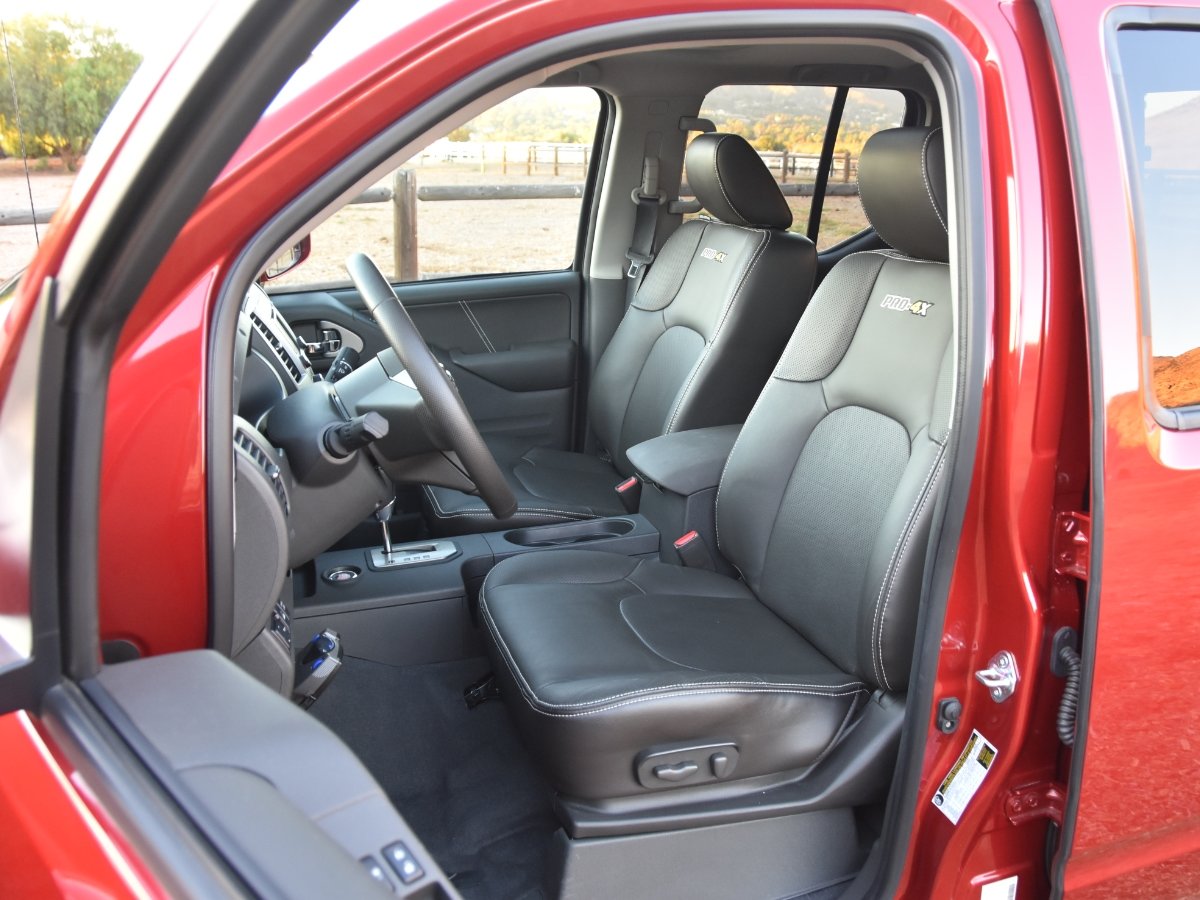 You’d think the Frontier’s wasted space on the center console would be a form and function liability, but that’s not the case. This truck offers plenty of storage in other locations, including dual glove compartments and a decent-sized bin underneath the center armrest.

In PRO-4X trim, the Frontier has an eight-way power-adjustable driver’s seat that provides a tall and supportive position behind the truck’s thick-rimmed steering wheel. But this isn’t one of Nissan’s Zero Gravity designs, and after three hours in the truck, we were ready to stop, get out, and stretch.

The front passenger’s seat does not have a seat height adjuster, but that’s not an issue. It sits high enough off the floor that the omission isn’t a big deal. Rear seat room is tight—which is true of all midsize pickups—with a flat bench seat and almost non-existent backrest angle. And don’t look for rear air conditioning vents or, heh-heh, USB ports.

Thanks to a standard spray-in bedliner, bed-rail caps, and a standard Utili-Track channel system with adjustable tie-down cleats, a Frontier PRO-4X is ready to haul up to 1,020 pounds of payload. The bed isn’t terribly deep, though, at 18 inches. And it measures just 27.1 cubic feet in total volume up to the side rails. 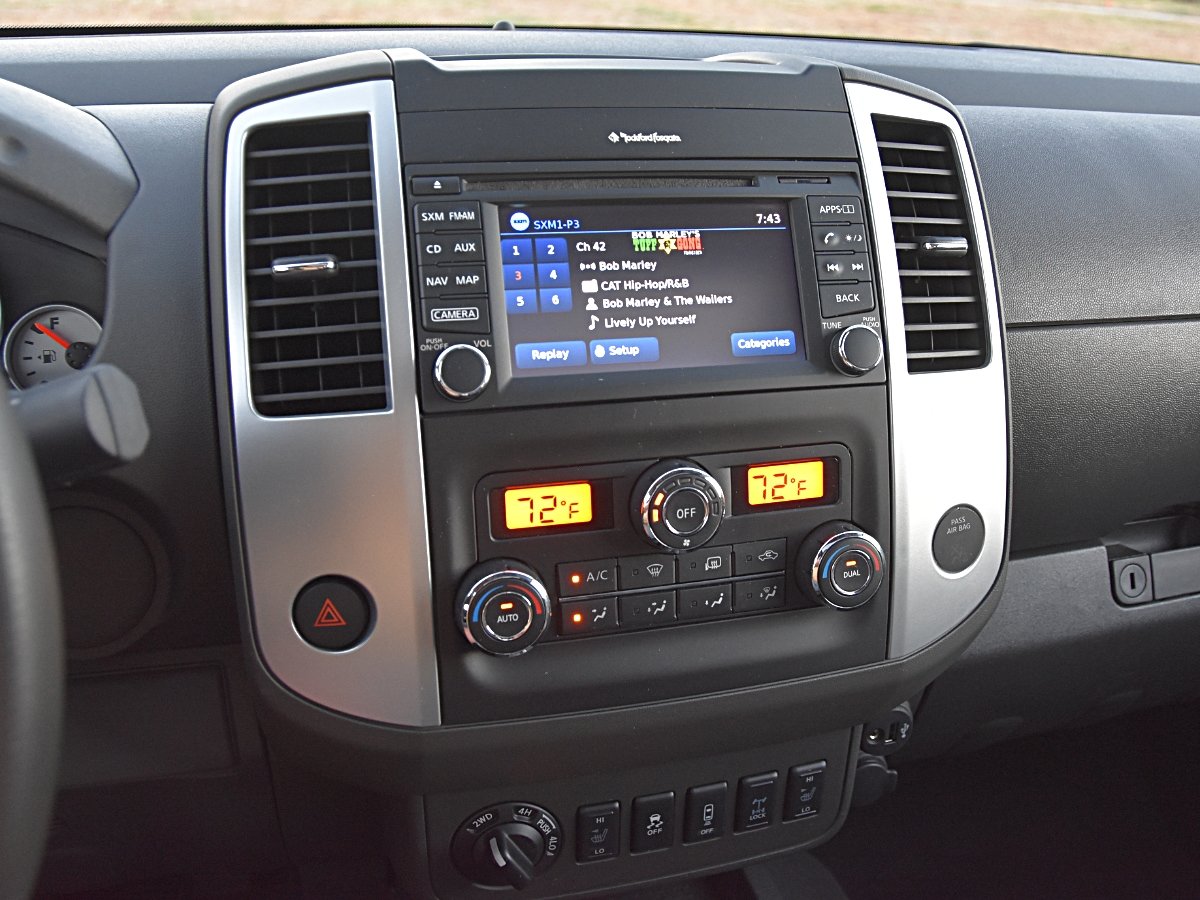 Equipped with a 5.8-inch touchscreen infotainment system, the Frontier PRO-4X’s display isn’t much bigger than a smartphone. It includes NissanConnect Apps, though, along with satellite radio, a navigation system, a voice recognition system, and a 10-speaker Rockford Fosgate premium sound system that delivers big, loud sound if not much in the way of crispness or clarity.

What it doesn’t have (and this comes as no surprise, given the truck's age) is Apple CarPlay or Android Auto. Pair an iPhone to Bluetooth, and you can use the Siri Eyes Free voice assistant. It’s a more natural alternative to the Frontier’s voice recognition technology, which works just fine as long as you follow the specific prompts shown on the display screen.

That’s the extent of the technology in the Frontier, a fact that is refreshing and revolting all at the same time. 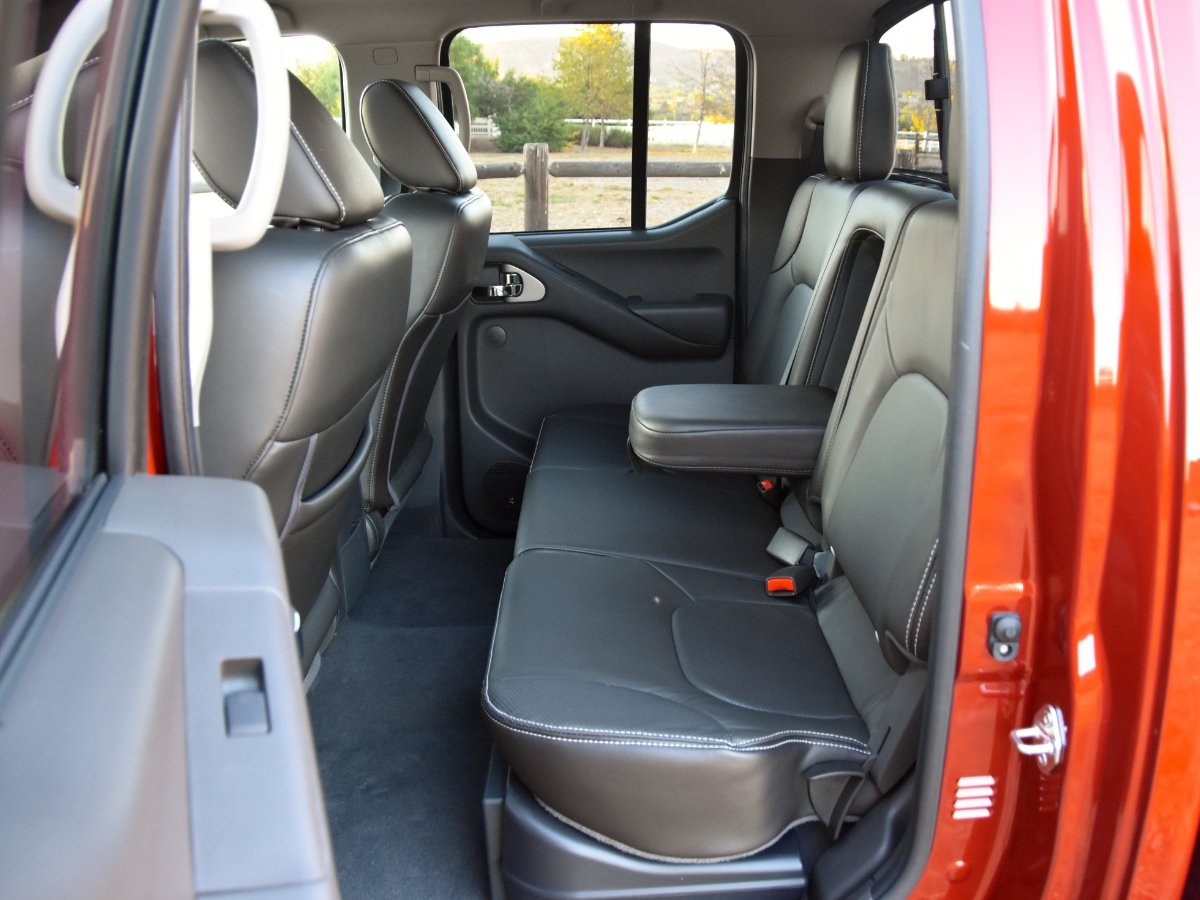 People who seek a simple, plain, honest truck at a good price might be tempted to get the yester-tech 2020 Nissan Frontier. But that’s not advisable because of its crash-test scores.

The National Highway Traffic Safety Administration (NHTSA) gave the Frontier an overall safety rating of four stars. But when you examine the truck’s frontal-impact protection, you see a three-star rating for the driver and a two-star rating for the front passenger. And with RWD, the Frontier also gets a mediocre three-star rollover resistance rating.

Ratings from the Insurance Institute for Highway Safety (IIHS) aren’t much better. In the small overlap frontal-impact test, the Frontier earned a "marginal" rating. The headlights did not perform well, either, getting a "poor" rating.

As far as driver-assistance and collision-avoidance technologies go, the Frontier boasts a reversing camera, antilock brakes, traction control, and stability control. That’s it. The Frontier’s lack of modern safety technology, coupled with its unimpressive crash-test scores, are the best reasons to skip it in favor of any other midsize pickup truck. 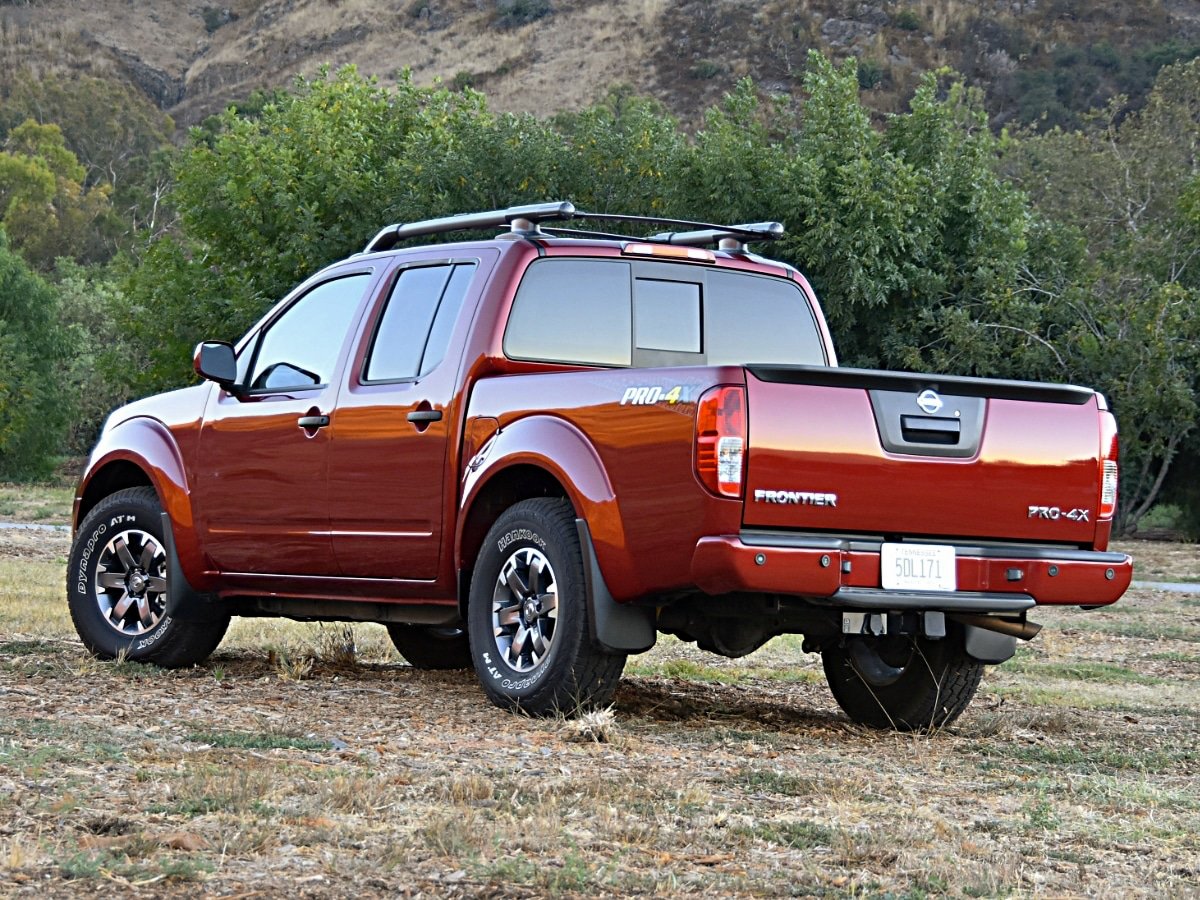 The 2019 Frontier started at $19,290 in King Cab S trim. That version of the 2020 Frontier has a starting price of $26,790. Part of that price hike relates to the new V6 engine, but most of it is because last year’s four-cylinder engine is gone from the lineup.

Compared to other extended-cab trucks with 2WD and a V6 engine:

So, at $26,790 the 2020 Nissan Frontier S King Cab remains cheaper than every other midsize truck except the Ford Ranger XL SuperCab, which is a better vehicle, with superior crash-test ratings, more modern technology, up to 7,500 pounds of towing capacity, and what Ford claims is best-in-class payload capacity.

The Ford Ranger is the target for the redesigned Nissan Frontier. This old version of the truck simply can’t compete.

What's your take on the 2020 Nissan Frontier?

Have you driven a 2020 Nissan Frontier?
Rank This Car