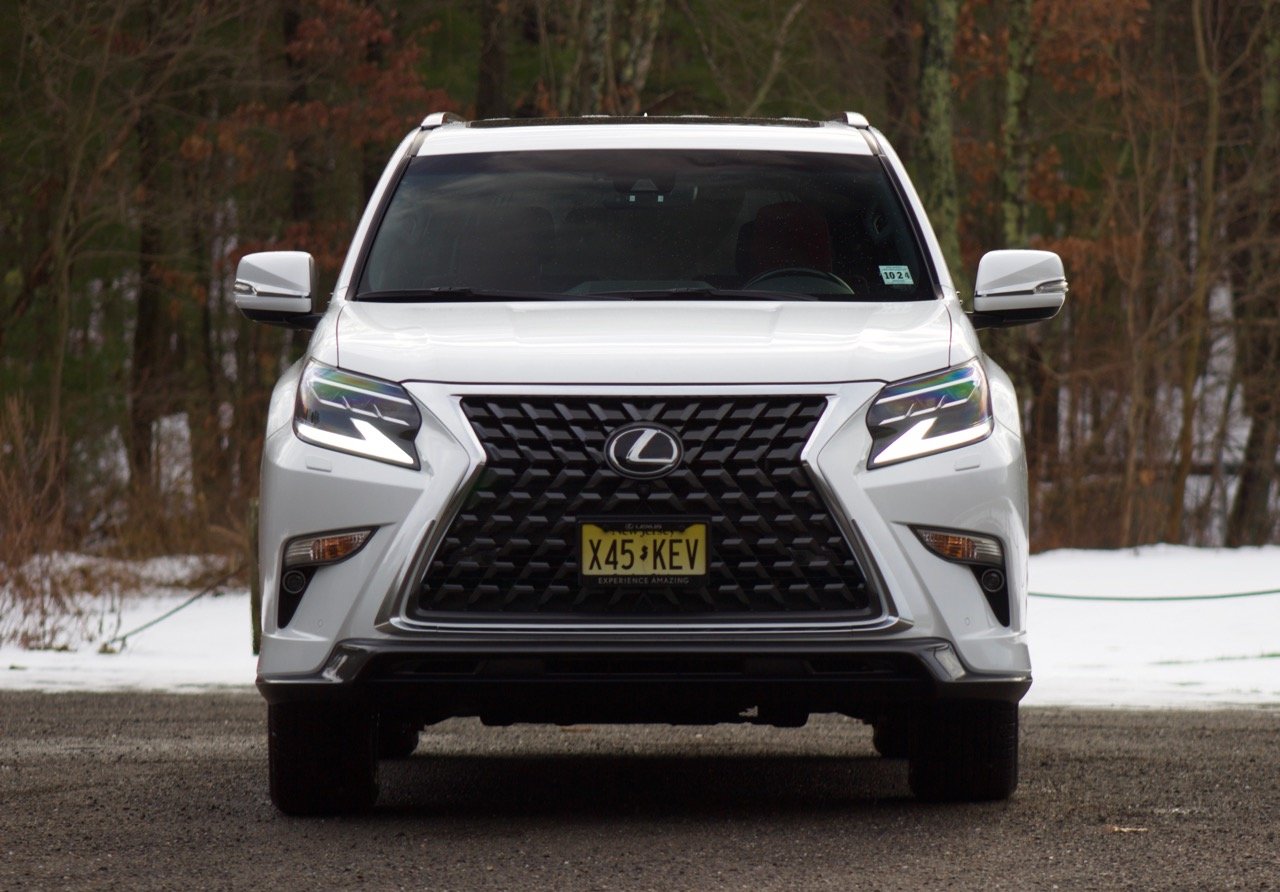 Depending on who you ask, the modern SUV will continue to dominate the new-car market until it's the only type of vehicle on the road (except pickup trucks). That prediction makes sense; modern SUVs drive like cars, can get through most snowstorms, and have the cargo space to tackle most of what daily life throws at them. They are great all-around vehicles, but in trying to master everything, many have lost the specialization that made them noteworthy in the first place. In particular, many luxury SUVs have lost their off-road credibility.

There are exceptions to this trend, including upmarket trims of the Jeep Grand Cherokee as well as most of the Land Rover lineup. Another brand that bucks the trend is Lexus. Sure, the Lexus RX pretty much created the modern luxury crossover, but it gets sold right alongside the immensely capable Lexus LX and this vehicle: the 2020 Lexus GX.

You’ll be forgiven if you forgot the GX was still available. Lexus has updated the GX for 2020 with fresh styling to make it a bit more memorable. Still, beneath that new exterior is one of the oldest vehicles offered today, and as you’ll learn, that has its advantages. 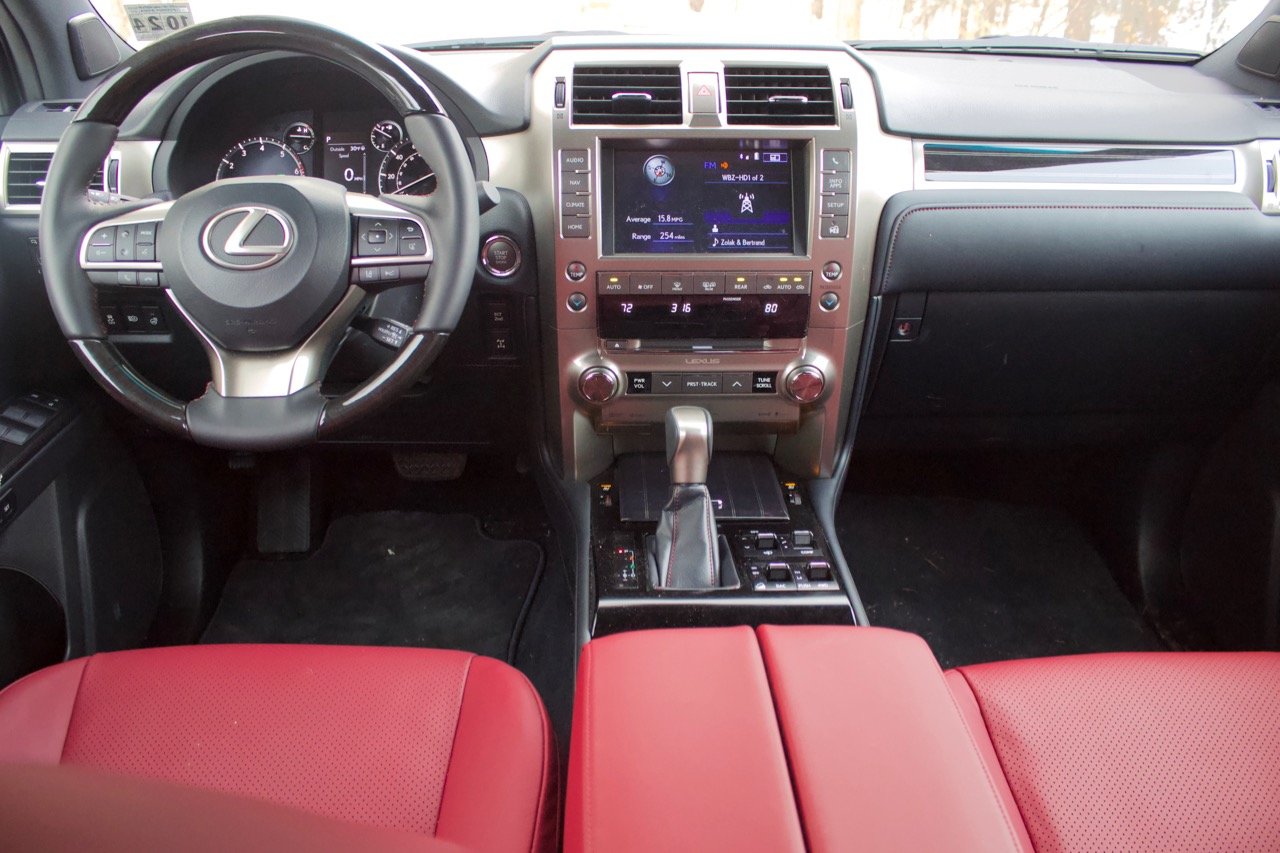 The Lexus GX is certainly long in the tooth. It was introduced in 2002 and redesigned for the 2010 model year. The second generation continued to the current 2020 model year, albeit with some new design tweaks from Lexus. This updated GX takes on the garish hourglass grille design that has exploded onto the front end of every vehicle in the Lexus lineup. In fact, the GX is one of the last vehicles to take on this latest version of the design. On some Lexus vehicles, it is pretty hard to look at, but on the GX, it’s not so bad. The GX certainly wears it better than the larger LX.

Despite the new front end and headlights, this is still a decade-old vehicle, and it is sure to soldier on for a number more years. Were it any other luxury SUV, this would spell doom for the model, but the Lexus GX shares a platform with the Toyota 4Runner—one of the last true sport utility vehicles out there. The 4Runner thumbs its nose at change, and in many ways, the GX is no different. That is because both vehicles are incredibly capable, and their rugged capability outweighs the necessity to innovate.

The GX's age is readily apparent in the cabin. In there, things look unchanged from a decade ago (because they are). The large, chunky center console with big buttons and a recessed infotainment screen is a hallmark of early 2010s Lexus cabin styling. While I wouldn’t want this interior in a new Lexus RX, sticking to the basics kind of works for more rough-and-tumble SUVs. Consider that before it adopted the full touchscreen center console, Lexus used to brag that the GX's big radio and climate-control dials and knobs were “operable while wearing work gloves.” My, how things have changed.

Lexus offers the GX in three trims: the 460, the 460 Premium, and the 460 Luxury. The 460 is effectively the base trim, though it’s hard to call it that. It has a long list of standard features, including 10-way power front seats, leather upholstery, push-button start, automatic climate control, and a power sunroof. It also comes standard with an 8-inch touchscreen infotainment system.

The Premium trim adds rain-sensing windshield wipers, 3-zone automatic climate control, front and rear parking sensors, and LED fog lights. It also adds wood and aluminum cabin accents, heated and ventilated front seats, and heated rear seats. Finally, the Premium adds navigation to the touchscreen, as well as apps such as Yelp and iHeartRadio. These tech features are part of an available Navigation package on the 460, but they come standard on the 460 Premium.

On the 460 Premium, second-row captain’s chairs are a $3,115 option, but they come standard on our 460 Luxury test model. Other features on the Luxury trim include premium leather upholstery, a heated steering wheel, self-leveling air suspension, and power-folding/reclining third-row seats.

Our Luxury test model also came with the optional rear-seat entertainment system, comprised of dual seatback screens, headphones, and a remote. This was a high-end option 10 years ago, but I’m not sure how relevant it is at a time when everyone has a smartphone or tablet to keep themselves entertained on long trips.

CarGurus recommends avoiding many of these upcharges and add-ons and going for the base 460 trim. As we mentioned, it comes extremely well equipped and even includes Amazon Alexa integration. 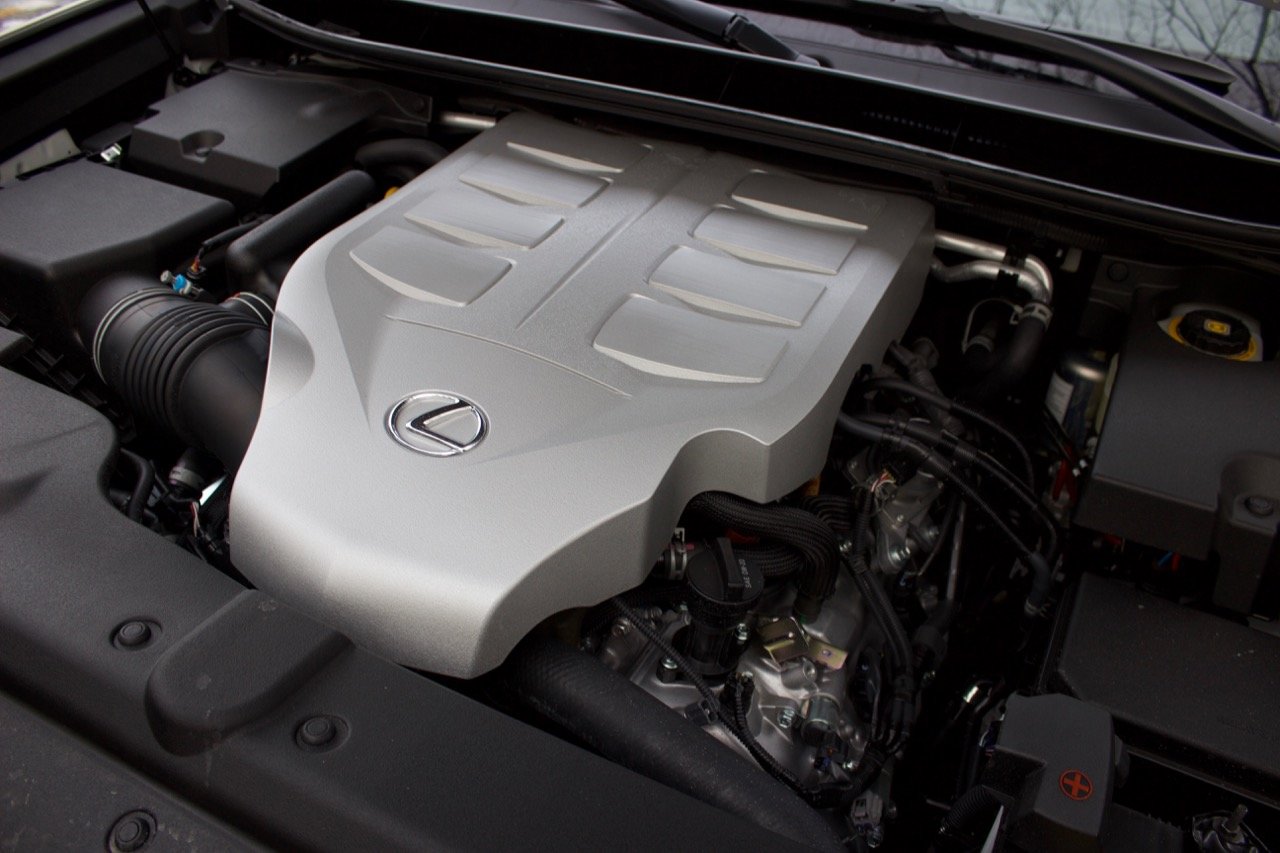 As its alphanumerics suggest, the GX 460 is powered by a 4.6-liter V8 engine. It makes 301 horsepower and 329 pound-feet of torque, sent through a 6-speed automatic transmission to standard 4-wheel drive (4WD). Reading those horsepower and torque specs now might not impress you, because many modern V6 (and even some highly turbocharged 4-cylinder) engines are capable of exceeding them. But V8 engines offer an unmistakable swell of power that you experience in real-world driving. Whether you're lurching off the line or rumbling up to highway speeds, sometimes there really is no replacement for displacement.

Many Lexus vehicles have distinctively light steering, and the GX is no different. At first, it feels over-boosted like your grandma’s old Buick, but getting the GX out onto the road dispels that feeling. Despite its lightness, the steering is actually quite direct and responsive. The GX is no sports car, but it certainly won’t veer around on main roads or the highway, where it seems to tighten up even more.

Our test model had the self-leveling air suspension, which can raise or lower the GX with the push of a button. This suspension made for a really smooth, yet composed, ride. Like the steering, it is soft, but it isn’t numb. You can fly over potholes and bumps in the road, and yet you can also turn into a corner without too much drama.

When working with the 4WD system, the GX is an absolute beast. The typical car-based luxury SUV might be fine through deep snow, mud, sand, or some form of very mild off-road driving, but it’s going to whine the whole time as you push the vehicle’s capability. The GX will go beyond that without breaking a sweat.

Next to the GX's shifter, you’ll find a panel of toggle switches. From here, you can operate the various 4WD modes, adjust the suspension height, or activate Downhill Assist Control, which is like cruise control for the trail. It is from here that you can also adjust the suspension response between Comfort, Normal, and Sport.

Who needs this kind of capability and control? The better question is, how do you spend your weekends? As the GX is based on the 4Runner, it has the same level of control over its various chassis systems, and it's designed for people who truly get off the beaten path. That doesn’t mean people are routinely taking the GX out onto class 5 off-road trails, but it definitely means you won't have trouble taking it out onto the beach or up to a remote ski cabin.

Adding to its seemingly do-it-all status, the GX can tow up to 6,500 pounds when properly equipped, and yet it also provides a surprisingly tight turning radius of 19 feet, which is smaller than the Lexus RX's and NX's. With all this in mind, the GX could actually be a sensible city vehicle for urbanites who want a larger luxury SUV.

As one might imagine, fuel-economy estimates for this aging V8 machine are not that impressive. The 2020 GX 460 returns fuel economy of 15 mpg city, 19 highway, 16 combined. In a week of combined city and highway driving, we observed an average of 16.3 mpg. 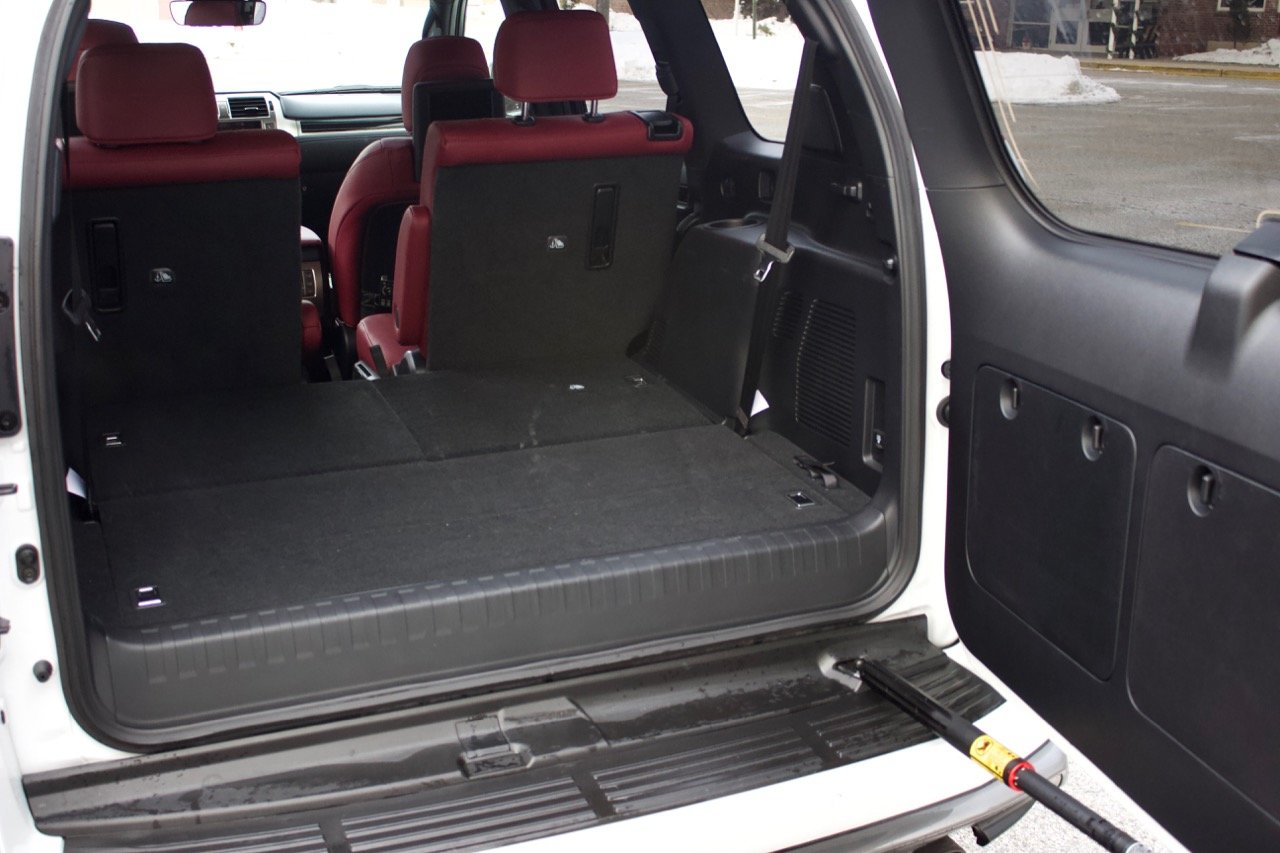 The Premium and Luxury trims are available with the second-row captain's chairs, while the Luxury trim comes standard with the power-folding third-row seats.

The second-row captain’s chairs are actually a smart option for families. They provide a small access way to the third row, as well as a natural barrier between the kids. As for adults, getting into the third row can be a bit of a chore. This is one area where car-based crossovers shine, as they have been optimized for getting families in and out as quickly and efficiently as possible.

The GX also offers a unique way of accessing its cargo area, via a side-opening rear hatch. I’ve never seen the advantage of this type of rear hatch, and the only other vehicle I can think of that currently employs one is the Ford EcoSport. On the plus side, the GX does have a separately opening rear window/hatch, which is a terrific feature. It allows you to put items in the rear cargo area without having to swing open the massive side-opening hatch. 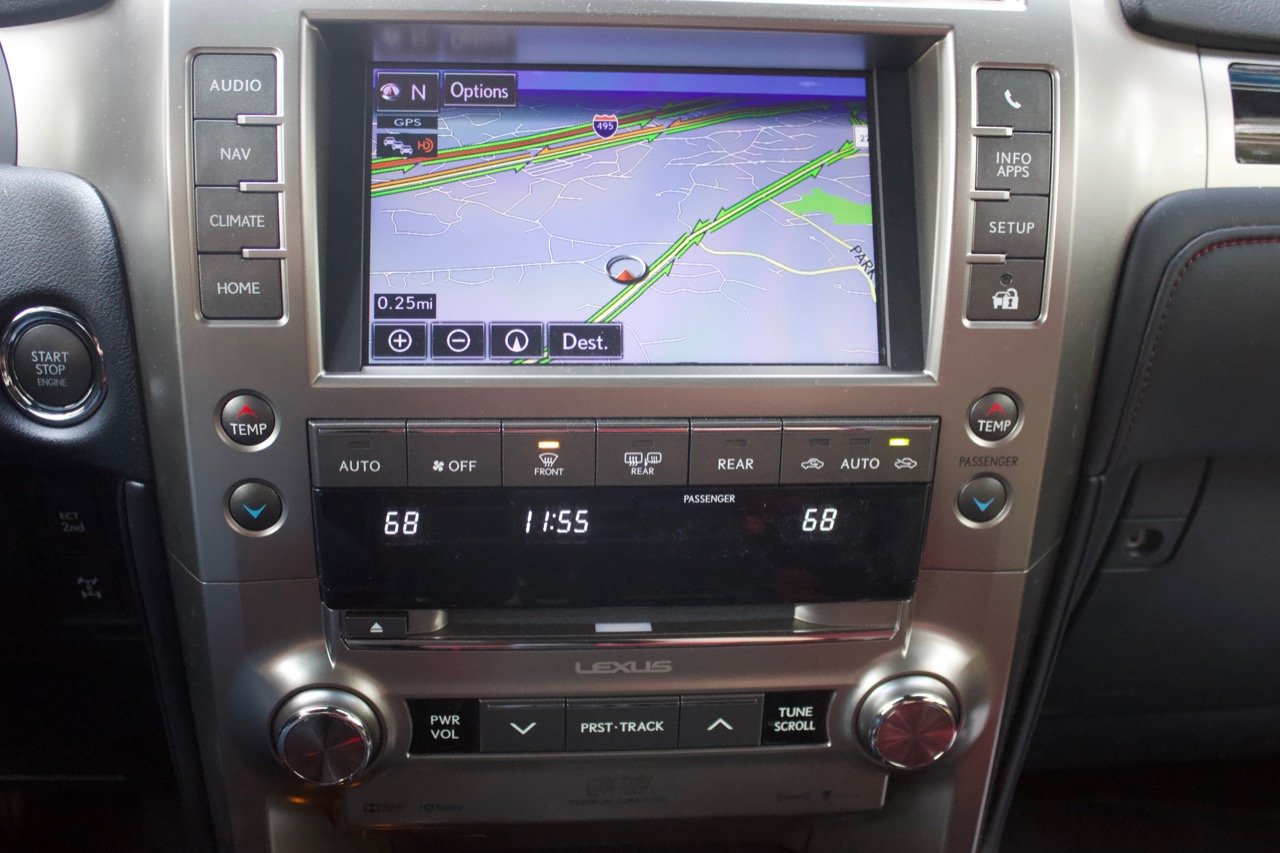 Perhaps the area in which the GX most clearly shows its age is in its touchscreen infotainment setup. This is clearly the last generation of Lexus Enform, but that has its perks. For one, it is a true touchscreen, as opposed to using the frustrating Lexus Remote Touch cursor system. The touchscreen is flanked by large buttons for audio, navigation, and climate controls, and it's proof that we’re headed in the wrong direction when it comes to in-car user interfaces. This decade-old layout is plainly simpler than what you might find in the Lexus RX or NX.

The rub is that you'll miss out on Apple CarPlay and Android Auto. That’s a tough tradeoff, but many drivers might choose the simplicity of this system over the complexity of the modern Lexus infotainment setup. 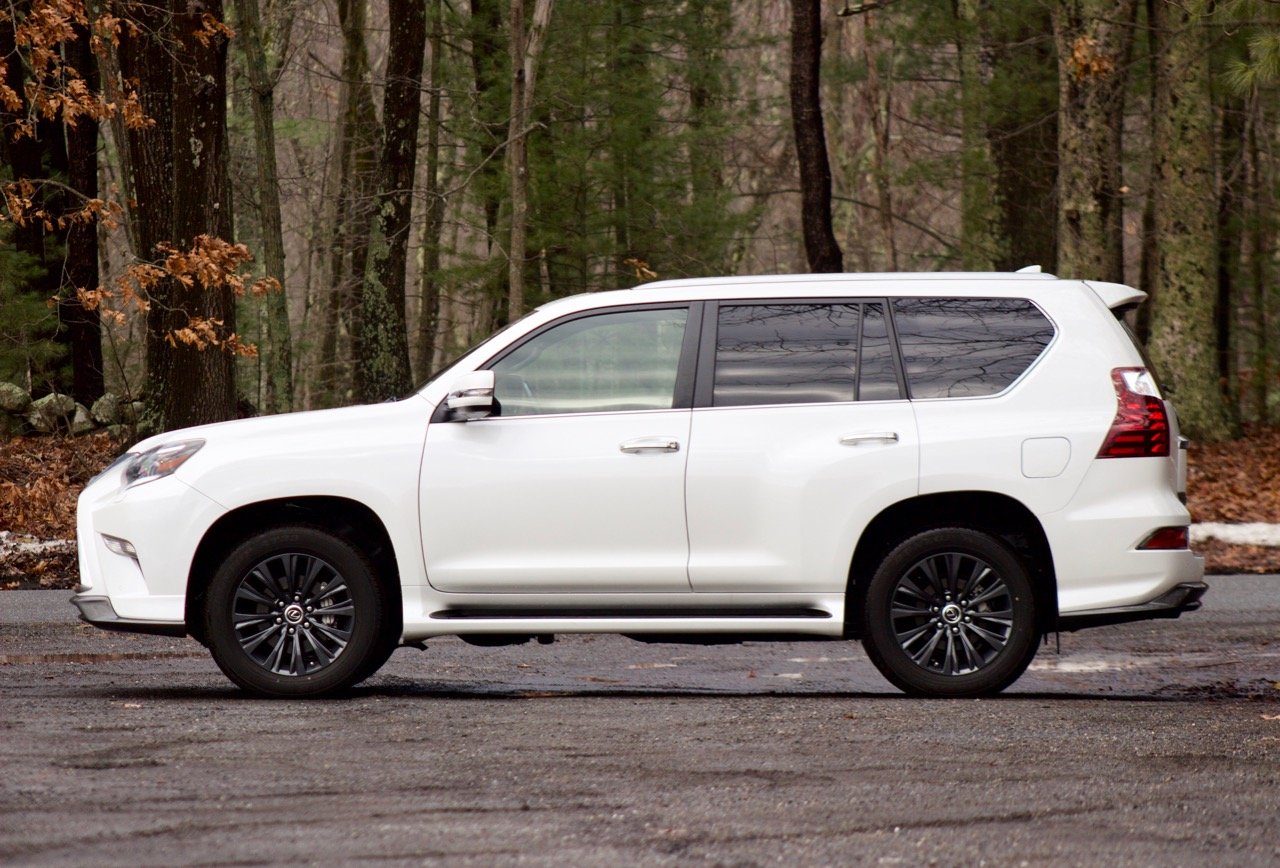 While Lexus has not updated the infotainment system, it has made sure the GX comes with the latest driver-assistance features. For 2020, the GX comes standard with the Lexus Safety System+. That means it includes forward-collision warning, adaptive cruise control, and automatic high beams. The GX also comes standard with blind-spot monitoring, and our test model had the available surround-view camera.

Finally, drivers will enjoy the GX's great visibility. The driver sits up high and gets treated to massive windows and mirrors. In addition to all the driver-assistance features, an unimpeded field of vision adds safety to any vehicle. 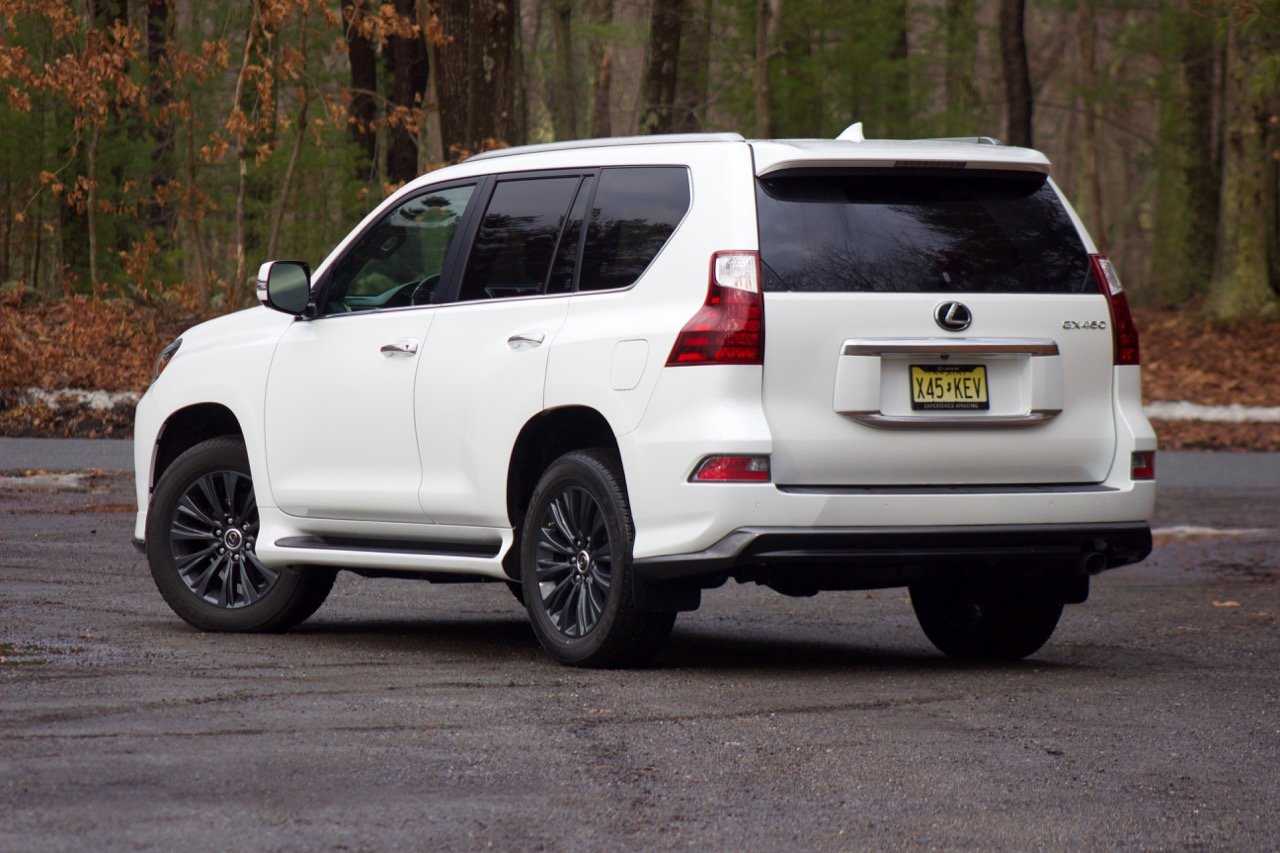 That is certainly a lot to pay for a luxury SUV that doesn’t offer features like Apple CarPlay and Android Auto, but the GX more than makes up for that with 3 rows of seats, a comfortable-yet-capable ride, and undeniable 4WD utility. When you really consider which other vehicles out there offer everything the GX does, the list is very short.

A Jeep Grand Cherokee Overland costs less, but it has only 2 rows of seats. A Land Rover Discovery costs about the same, but I don’t think it’s any more capable than the GX. This extremely short list starts to bring the price of the GX into focus. Not all shoppers will need the off-road grit of the GX, but for those that want this level of capability in a luxury SUV, the GX is nearly the only choice.

Joe One of the most Reliable vehicles you will ever own.