A multi-talented 5-passenger midsize SUV, the 2020 Jeep Grand Cherokee is equally at home at Laguna Seca, Nags Head, or the Rubicon Trail. The trick, of course, is to choose the right version for each of these individual environments. 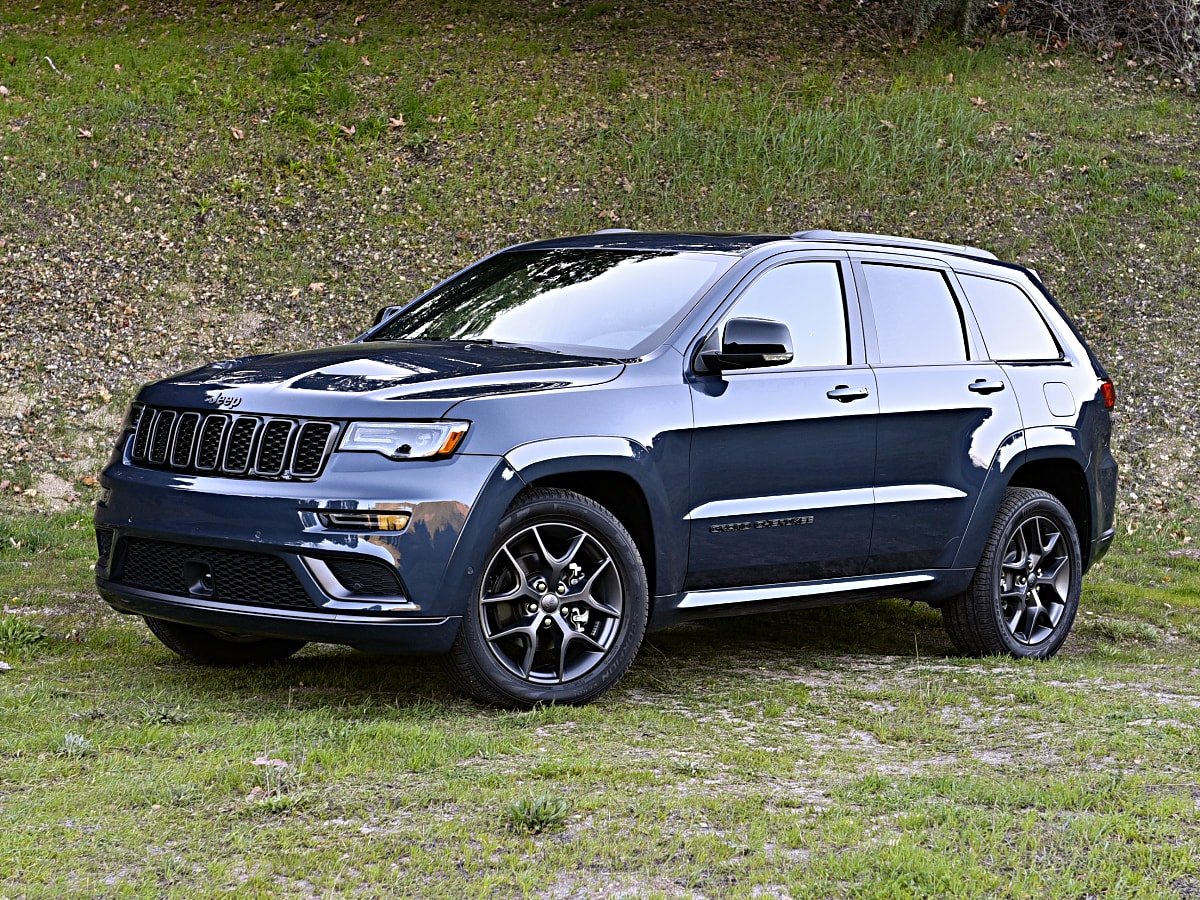 One of the most popular SUVs in America, the 2020 Jeep Grand Cherokee enters its tenth year in production without a major redesign. That is expected to change, and soon. But in the meantime, the 2020 Grand Cherokee remains an appealing—if flawed—choice in its segment. 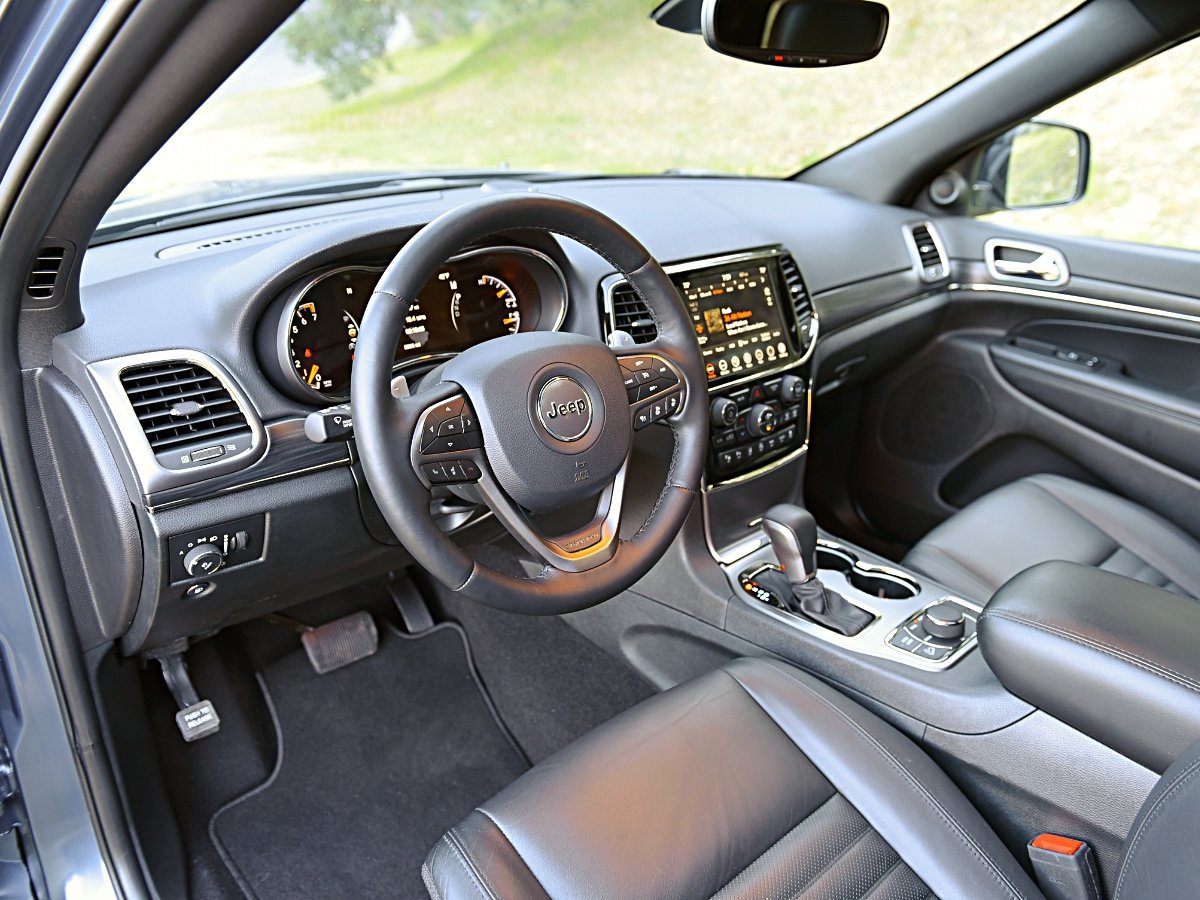 As tested, the Grand Cherokee Limited X came to $53,275, including the destination charge. It had every option except for a V8 engine, a towing package, and yes, a CD player. What once came standard in all new cars is a $495 upgrade in a 2020 Grand Cherokee.

Regarding the interior and the materials used to construct it, disappointment starts to set in with any Grand Cherokee priced over $50,000. While many versions of the SUV offer premium materials, they’re applied over a foundation that lacks substance. In short, the more expensive a Grand Cherokee is, the more irritating the preponderance of hard plastic becomes. 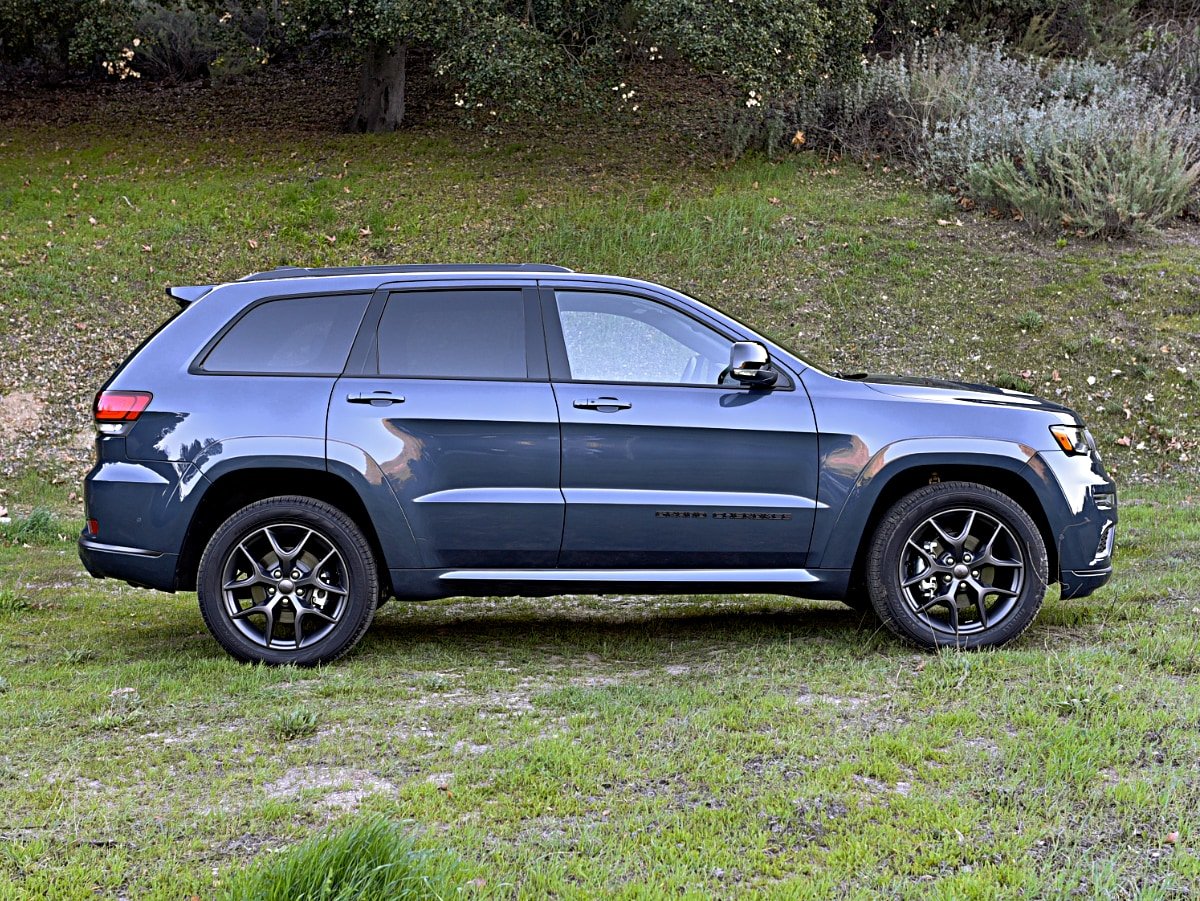 Equipped with the standard 295-horsepower, 3.6-liter V6 engine, and the 8-speed automatic that’s installed in every Grand Cherokee, the test SUV offered satisfying acceleration while returning 21 mpg in combined driving, according to the EPA. I eked out 19.4 mpg from the test vehicle, which fell short of the official rating but is nevertheless good for a traditional SUV.

If that’s not enough power and you’ve got an unlimited budget for gas, three V8 engines are available. The 5.7-liter “Hemi” V8 makes 360 hp and, more importantly, 390 pound-feet of torque. That’s a 130 lb-ft improvement over the V6.

Beyond that, a 6.4-liter “Hemi” V8 is bolted into the Grand Cherokee SRT, whipping up 475 hp and 470 lb-ft. And then there is the patently ridiculous but unbelievably fun Grand Cherokee Trackhawk, which has a supercharged 6.2-liter V8 of Dodge Challenger Hellcat fame, putting 707 hp and 645 lb-ft of torque to the pavement for a claimed 0-60-mph acceleration time of 3.5 seconds.

The Trackhawk is also thoroughly fortified to manage all of that power, with a full mechanical massage that makes putting a Jeep on a racing track a credible exercise. The SRT is slightly less capable than that.

Meanwhile, when it comes to the Grand Cherokee’s original reason for being, the Trailhawk stands ready to travel well off of the beaten path with all-terrain tires, skid plates, and the most capable of this Jeep’s 4-wheel-drive (4WD) systems.

Not all Grand Cherokees have 4WD. Rear-wheel drive (RWD) is standard for most versions of the SUV, with no fewer than four different 4WD systems ranging from a full-time single-speed system to an Active On-Demand system in the SRT and Trackhawk.

My Limited X came with the popular Quadra-Trac II 4WD with automatic operation and a 2-speed transfer case. Shifting into 4-Lo is easy, and in spite of its fancy 20-inch wheels and pavement-friendly 265/50R20 all-season tires, it went places crossover SUVs can’t. No doubt, its Selec-Terrain traction control system helped, as well as its hill descent control technology.

On pavement, driving dynamics are a mixed bag. The big wheels and tires produce impressive grip, but excessive lateral and vertical suspension movements can produce motion sickness. On broken pavement, the Grand Cherokee is unfazed, but at the same time, it can transmit sharp bumps and holes in the road throughout the SUV’s aging architecture.

The steering and brakes attempt to serve dual purposes, trying to be sharp and responsive enough for daily driving, yet calibrated for the task of serious off-roading. In the end, they’re simply average at best.

Nevertheless, I like driving the 2020 Jeep Grand Cherokee because it behaves like a traditional SUV, which is an increasing rarity in a world gone crazy for crossover SUVs. 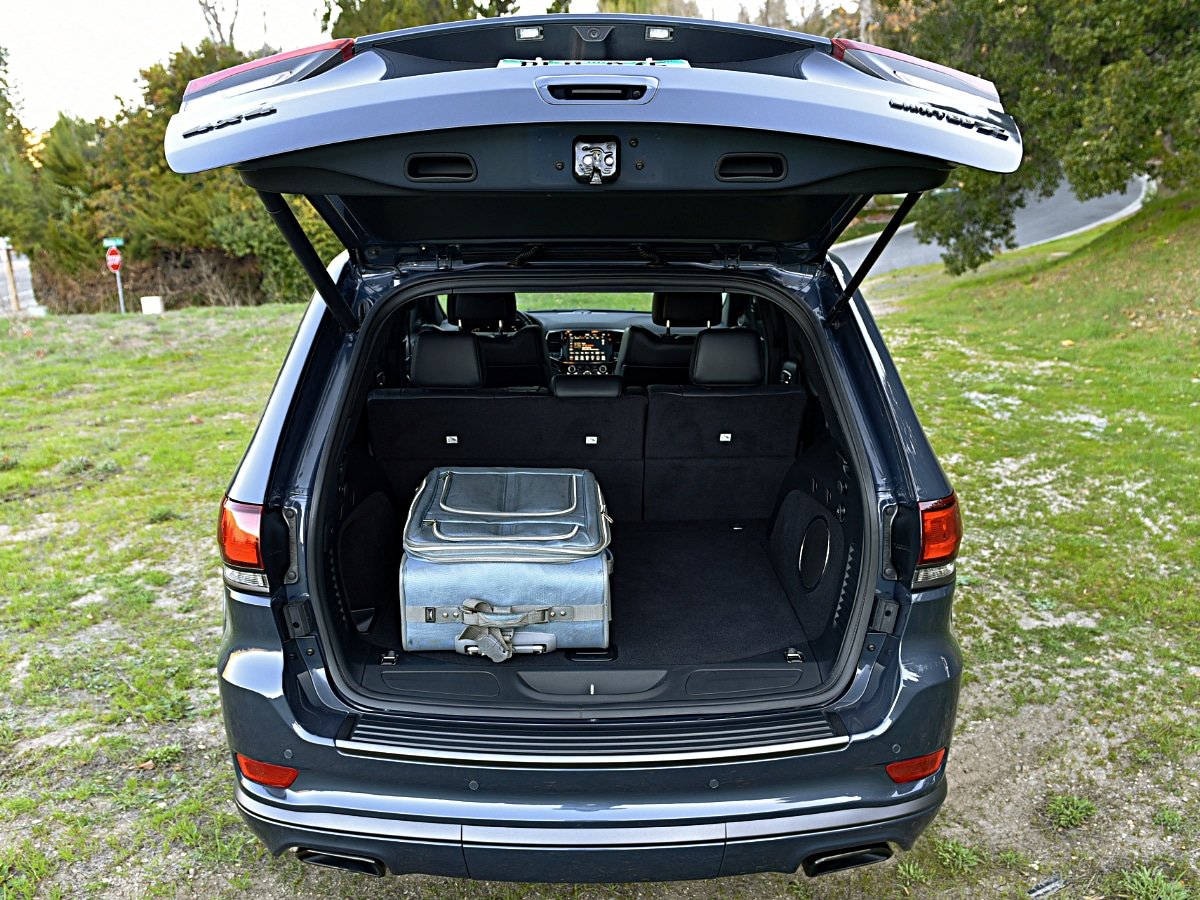 With seating for five people and cargo space measuring 36.3 cubic feet behind the backseat and 68.3 cubic feet with the backseat folded down, the 2020 Jeep Grand Cherokee falls on the smaller end of the midsize SUV spectrum.

Heated and 8-way power-adjustable front seats ensure comfort in front, but the Limited X doesn’t offer a ventilated seat option. Also, the seat heater buttons are integrated with the infotainment system, which is a source of irritation. The thick, leather-wrapped steering wheel is a pleasure to grip, though, and the places where you might wish to rest an arm or elbow are softly padded.

My backseat passengers, aged 9 and 11, had no complaints about the Jeep’s comfort levels, and they were happy with rear air conditioning vents and USB ports. Adults will find adequate legroom and a cushion that provides good thigh support.

Interior storage is decent, with a handy tray in the center console and sizable door-panel bins making up for a rather small bin under the center armrest and a glovebox lacking much in the way of extra space. Grocery bag hooks that are perfect for plastic sacks are located on the front seatbacks, a thoughtful touch. 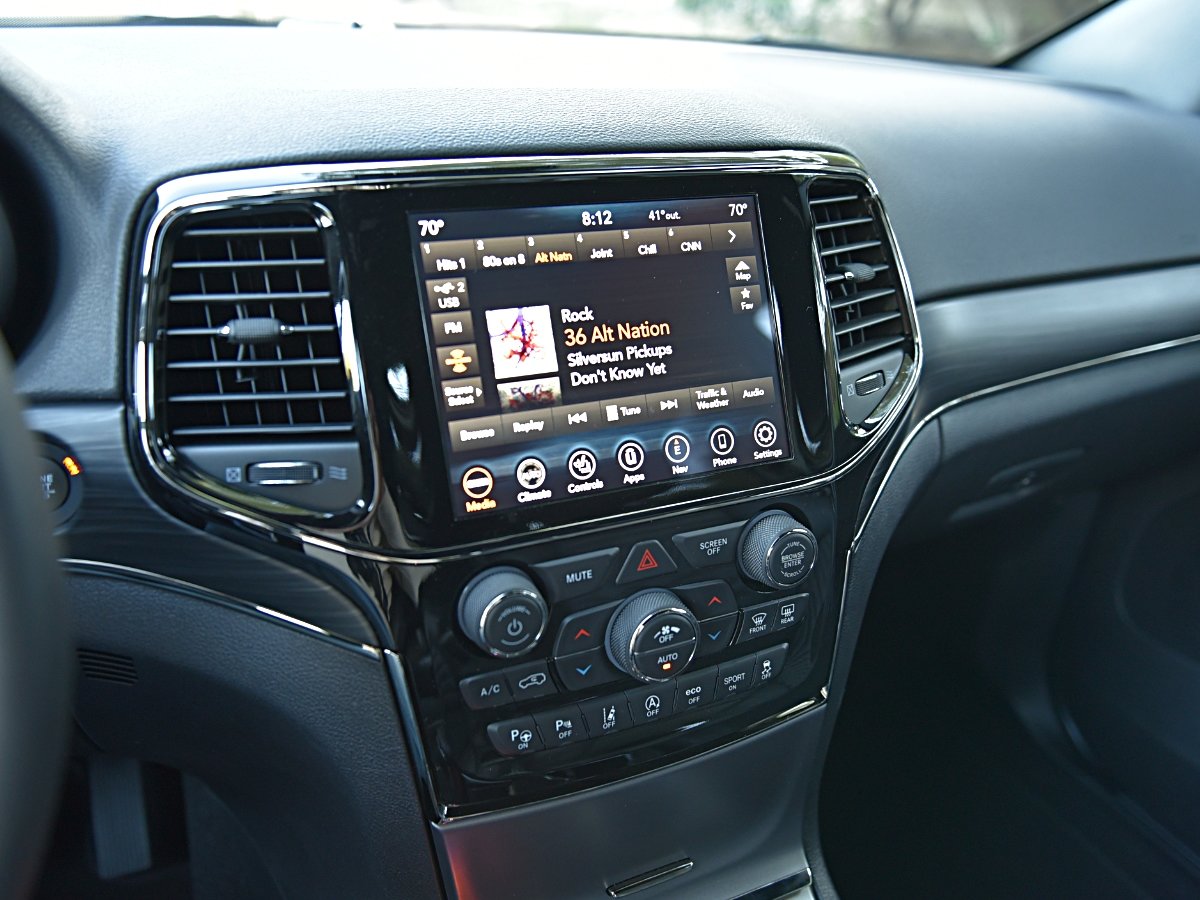 Sitting in the center of the dashboard, flanked by air vents, Jeep’s Uconnect infotainment system has long been an industry leader in terms of speed, graphics, and ease of use. However, especially in recent years, competitors have caught Jeep and sometimes surpassed it. It’s worth noting that the Grand Cherokee’s sometimes busy and bouncy ride can make it hard to accurately select virtual buttons shown on the display, but that the voice recognition system is easy to use.

A unique highlight of Jeep’s Uconnect is an app called Off-Road Pages. It shows important information related to off-roading excursions, such as altitude, GPS coordinates, power distribution, and more. The SRT and Trackhawk models have Performance Pages, where owners can track specific performance metrics. 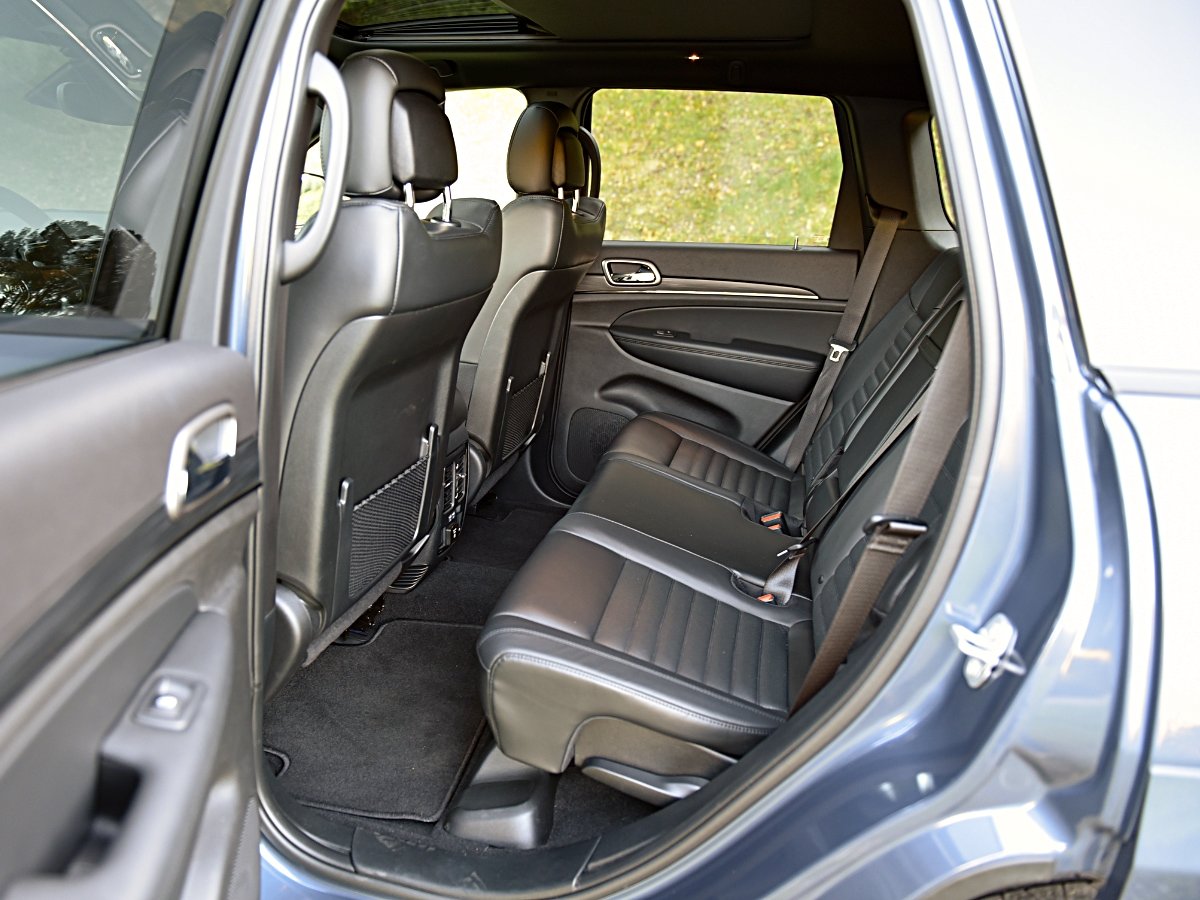 These safety features are effective and useful, a good thing given the Grand Cherokee’s unimpressive crash-test ratings. The National Highway Traffic Safety Administration (NHTSA), which hasn’t strengthened its crash-test standards since 2011, gives the Grand Cherokee an overall rating of 4 stars. With rear-wheel drive, it earns a middling 3-star rollover resistance rating.

In tests conducted by the Insurance Institute for Highway Safety (IIHS), the Grand Cherokee earns a Marginal rating for driver protection and a Poor rating for front passenger protection in the small overlap frontal-impact test. Also, the headlights rate Poor unless you upgrade to the Acceptable HID headlights in the Premium Lighting Group, which is standard in higher trim levels. 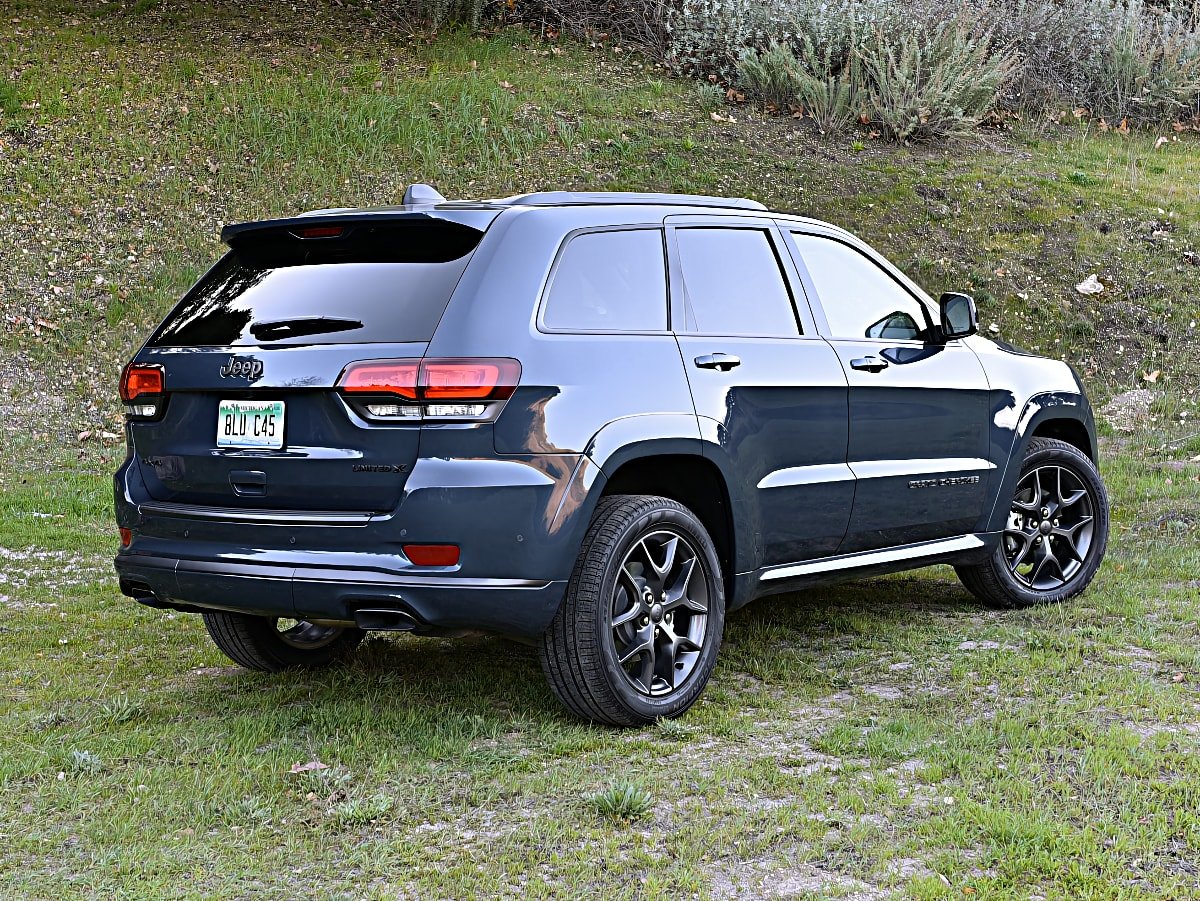 Aside from a Land Rover Range Rover Sport or a Porsche Cayenne, there isn’t another midsize SUV available today that boasts a Jeep Grand Cherokee’s well-rounded list of talents. Young and old, rich and poor, male and female, this Jeep appeals to a wide range of buyers for this very reason.

Is it a cost-effective SUV? Compared with the Land Rover and the Porsche, absolutely. But as a typical daily driver, not so much.

The value in a Jeep Grand Cherokee resides in its off-roading capability and the stunning performance found in the SRT and Trackhawk variants. If you don’t need this, then you’re probably going to be better off in a more efficient, nicer riding, better handling, roomier, and safer crossover SUV.

Even so, I won’t ever deny liking the Grand Cherokee in spite of its faults.

What's your take on the 2020 Jeep Grand Cherokee?

GuruG7VPM I’m shocked at the safety rating - my 2018 Grand Cherokee was hit on the interstate in a accident scene that was a 1/4 mile long. Hit multiple times - took out a city block of guardrail - and I didn’t get a scratch.

lorie This is my first suv and I'm very pleased

Exponent9 GuruG7VPM, understand that an anecdote alone does not constitute data. Who is to say you wouldn’t have been unharmed in many other cars in your example?

Have you driven a 2020 Jeep Grand Cherokee?
Rank This Car

24 views with 5 answers (last answer about a month ago)

Can I hookup a battery tender on a Jeep Grand Cherokee Limited 2020. The battery is under the front seat. I would like to hookup the Battery Tender in the engine compartment where the jump start ter...

what is necessary before welding on this car?

How Do I Edit My Past Review

I put in a review that I want to edit, where would i do that