The Pilot is a versatile, comfortable 3-row SUV, but it no longer stands out from the competition the way it once did. 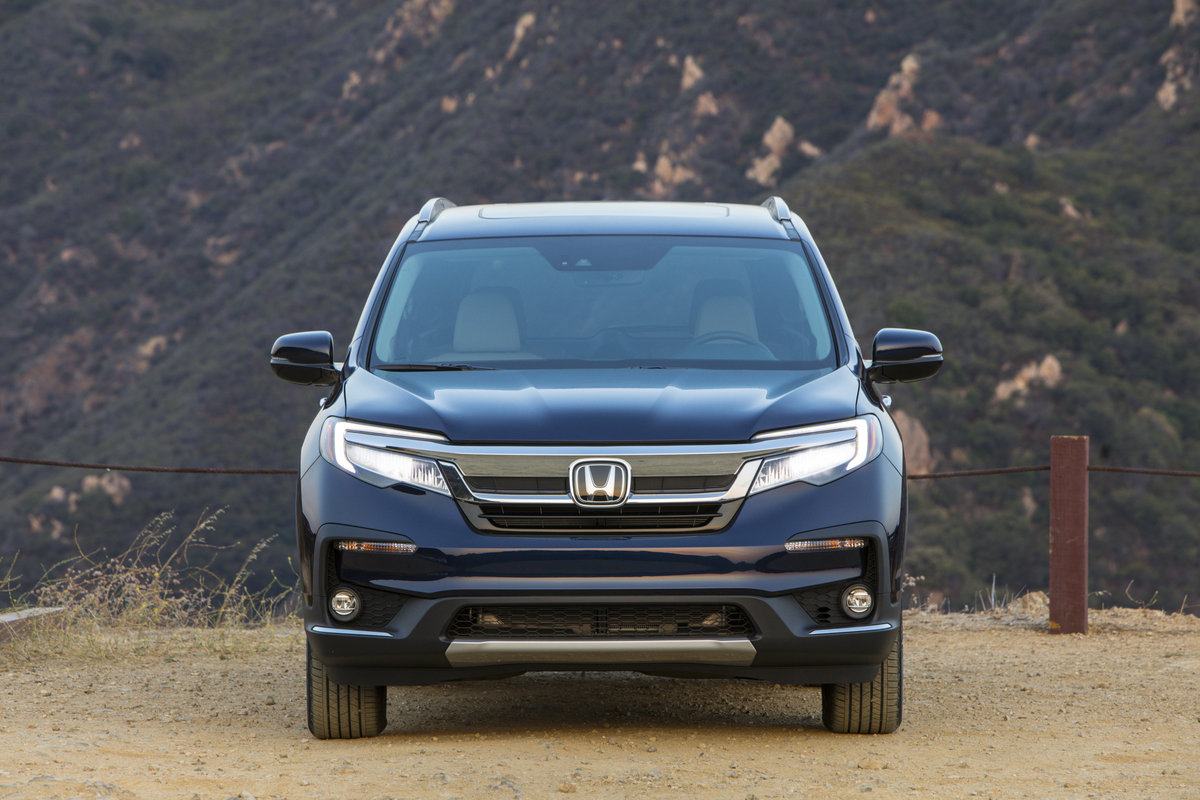 The Honda Pilot was once the leader of the midsize 3-row SUV pack. But several rivals from Hyundai, Kia, and Mazda have caught up to (and in some cases, surpassed) the Pilot. Still, the Pilot offers tons of cargo space, an adult-friendly third row, and an impressive list of standard safety features. But Honda’s choices on driver controls and in-car tech are its biggest shortcomings. Read on to learn how the Pilot stacks up against the competition, and to learn the CarGurus recommended trim. 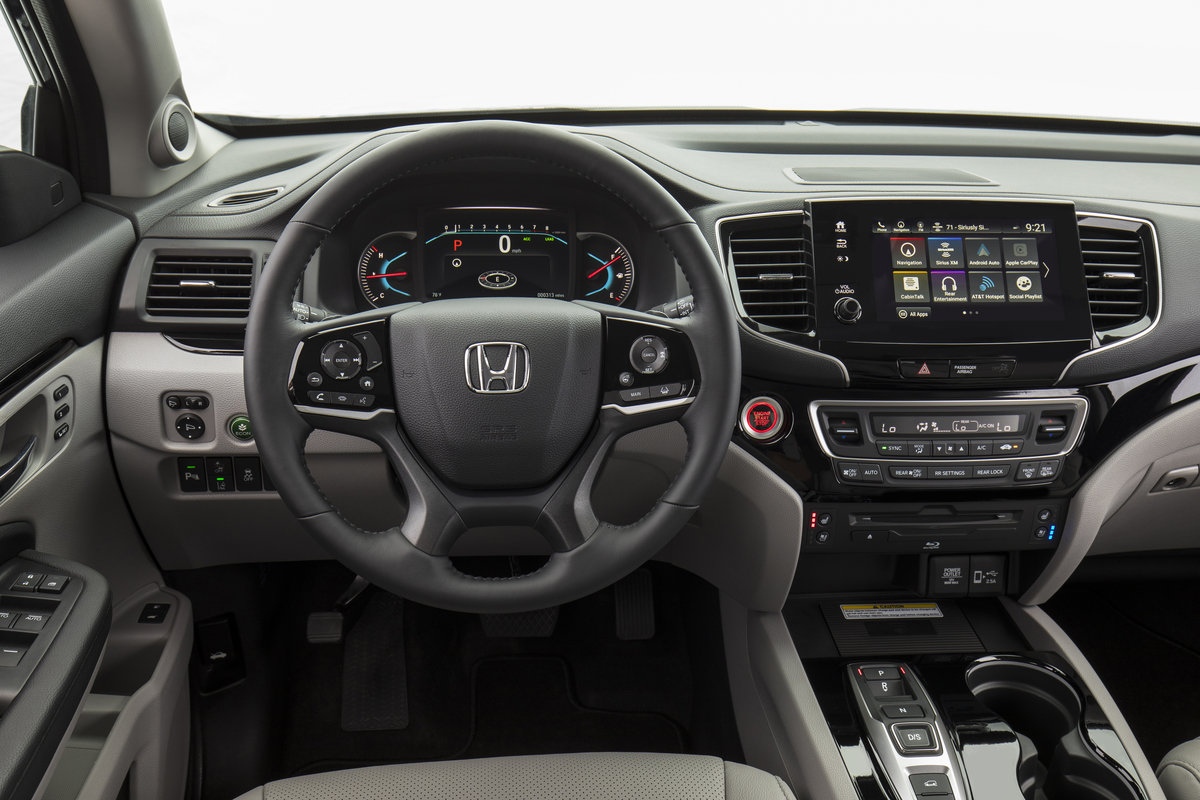 The 2020 Honda Pilot shares the same dynamic styling as the rest of the current Honda lineup. It features thin LED headlights and a multi-tiered grille. The subtle uptick in the belt-line around the rear side windows actually masks the size of the Pilot, making it look more svelte than it really is.

The Pilot features a modern cabin, complete with a semi-digital instrument panel. The fuel and engine-temperature gauges are analog, but all other information is found in a digital screen directly in front of the driver.

The cabin feels comfortable and spacious, and it has a solid level of refinement. Still, hard plastics are used in many spaces, and rivals like the Kia Telluride, Hyundai Palisade and Mazda CX-9 offer more upscale cabins.

The “L” in EX-L stands for the inclusion of leather upholstery, but it's not limited to just that. The EX-L also adds a power liftgate, a power moonroof, second-row in-door sunshades, and a 4-way power-adjustable front passenger’s seat.

The Pilot Black Edition is new to the Pilot lineup for 2020. It provides unique 20-inch black-painted wheels, black exterior paint, black grille and accents. It provides nearly the same content as the well-equipped Elite trim. 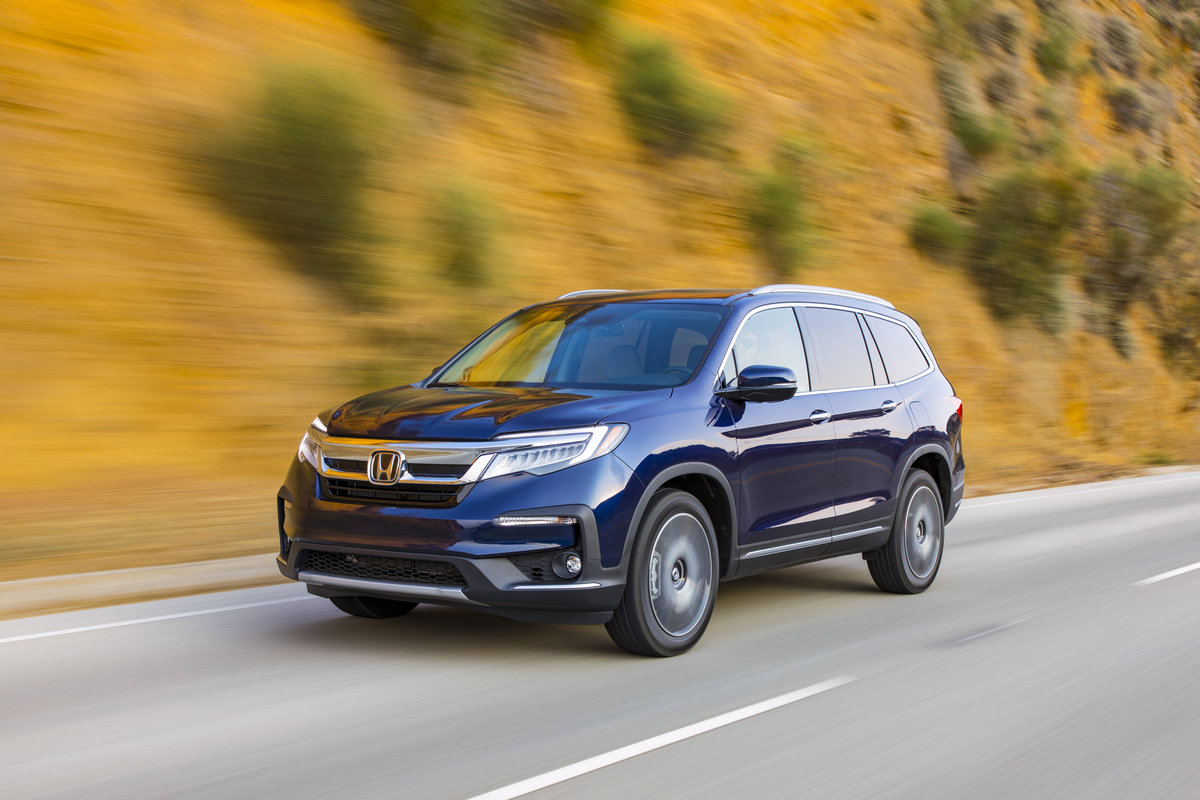 A 3.5-liter V6 engine powers the Honda Pilot, no matter the trim selected. It makes 280 horsepower and 262 pound-feet of torque sent to the front wheels (FWD) or available all-wheel drive (AWD). The V6 engine puts power through a 6-speed automatic on LX, EX, and EX-L trims. The Touring, Elite, and Black Edition all receive a 9-speed automatic transmission. The 9-speed provides more refined acceleration and should pay dividends on fuel economy.

Both transmissions are operated via Honda’s proprietary shifter button setup, replacing a normal shifter. As you’ll learn in the technology section, Honda seems hell-bent on rethinking basic automotive controls, and it has not been for the better. With a conventional shifter, you know if you are in Park, Neutral, or Drive right away. But even after you’ve embraced Honda’s learning curve, there’s still no immediate way to tell if you’re in Park or not without looking at the instrument panel or taking your foot off the brake pedal. It’s just so bizarre to insert some unique process into a generally understood control setup. Such efforts are more common in luxury cars, but it’s still an answer to a question no one seems to have asked.

No matter the trim or transmission, the standard V6 provides stout acceleration and will move from a standstill or make a passing move on the highway with ease. It’s not the segment leader for acceleration, but it makes plenty of power for real-world driving.

Speaking of real-world driving, the Pilot’s ride is perfectly tuned for it. It has a refined, comfortable driving experience designed for easy commutes and relaxing road trips. The downside is a lack of any real athleticism, but how many are looking for that from their three-row SUV?

Honda provides drive modes via the Intelligent Traction Management System. The mode selector is a button below the shifter buttons with a cartoon of the Pilot—not very intuitive, yet again. It allows the driver to cycle through Normal, Snow, Mud, and Sand modes. Each has their own drivetrain and traction control tuning for the various conditions. It won’t turn the Pilot into a rock-crawler, but it may give it a slightly better chance of avoiding getting stuck. 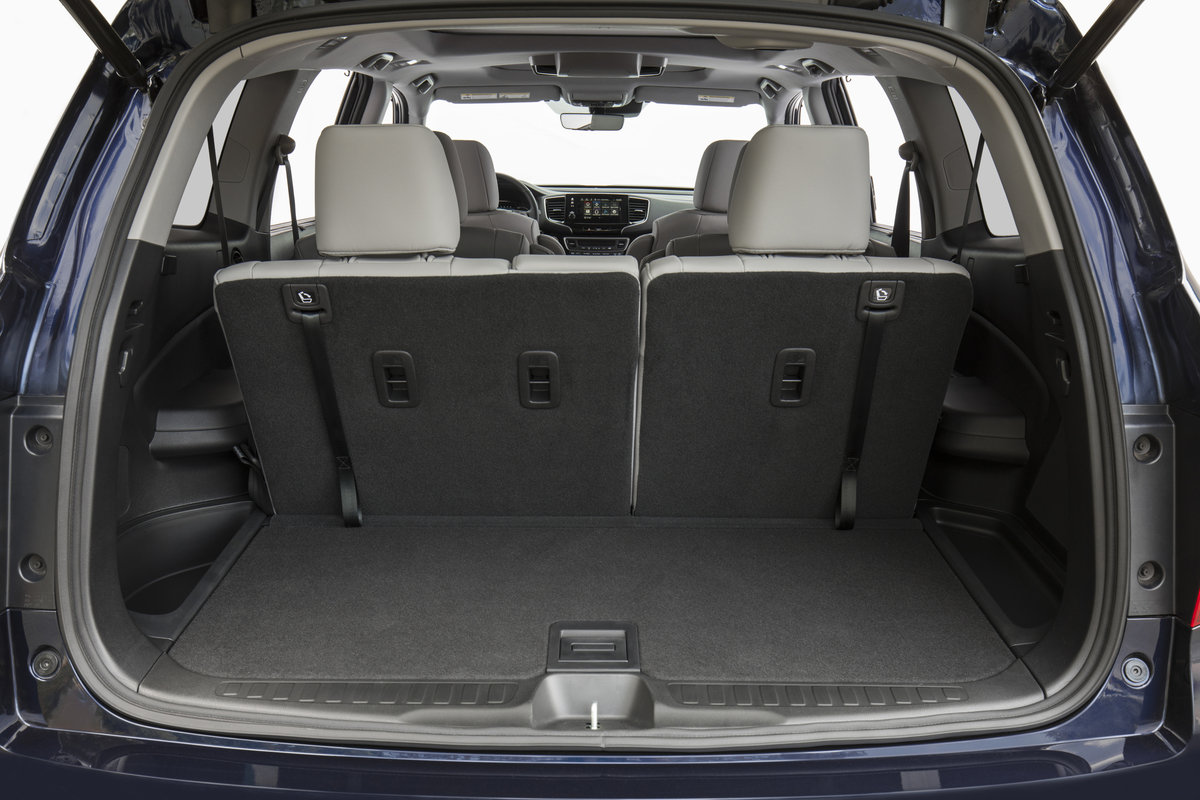 Some rivals have cramped third rows best suited for children, but the Pilot is among the 3-row SUVs that actually offer an adult-friendly third row. EX trims and higher provide one-touch fold-down rear seats. This makes accessing the third row that much easier.

With the second and third rows folded, the Pilot provides 83.9 cubic feet of cargo space. How does it fare versus the competition? To compare, the Highlander has 84.3, the Kia Telluride has 87 cubic feet, the Hyundai Palisade has 86.4 cubic feet, and the Subaru Ascent has 86.5 cubic feet. All these rivals are in the same neighborhood as the Pilot, even if they beat the Honda slightly. The Volkswagen Atlas exceeds them all with 96.8 cubic feet of space. Still, the Pilot has more cargo capacity than the more upscale Mazda CX-9, which provides just 71.2 cubic feet. EX-L and higher trims provide a power liftgate, while Touring and up hands-free power tailgate.

Like a Honda Odyssey minivan, the 3-row SUV's primary duty is family hauling. The Pilot has plenty of spaces for toys, juice boxes, and whatever gear you need to take around with the kids. The second-row captain’s chairs in the higher trims provide a narrow passage for kids to get in and out of the third row without folding the seats forward. The space between the captains also makes for a helpful No Man’s Land between the kids if you need to separate them. You can keep an eye on them with a helpful conversation mirror. It pops down from the sunglasses case area in the ceiling of the cabin. 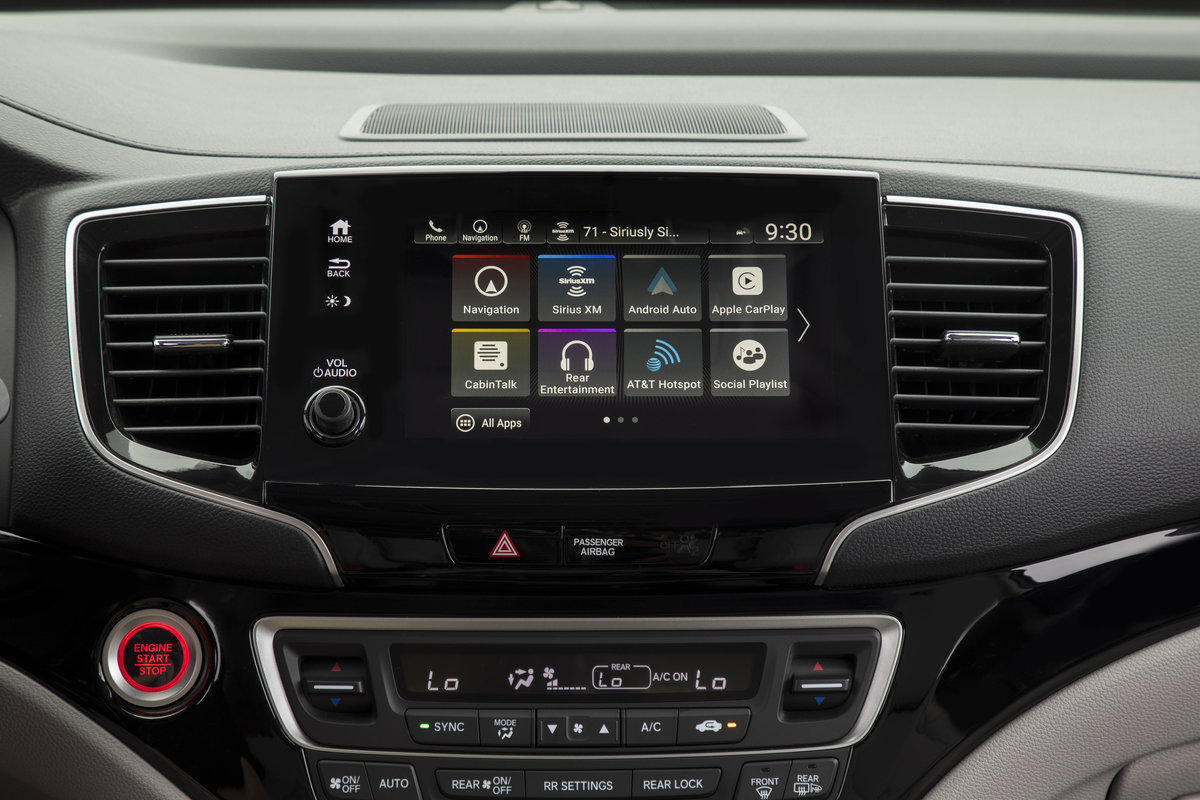 The LX trim level provides a 5-inch color LCD screen. It operates a 215-watt, 7-speaker stereo with a subwoofer. Bluetooth connectivity and a USB port are also included on the base trim. All other trims feature Honda’s Display Audio 8-inch touchscreen infotainment system with Apple CarPlay and Android Auto.

Display Audio is another area where Honda should excel but got too smart for its own good along the way. The Pilot has just a small volume knob and lacks an actual tuning knob. Any interaction with the radio relies on using the touchscreen infotainment system, which has a confusing layout. Menu navigation and user experience have either been overthought or were an afterthought.

All but the LX trim also include HD Radio, SiriusXM satellite radio, and Cabin Control Remote Capability. This last feature lets back seat passengers control the stereo using a smartphone app. It’s a clever feature, though I’m not sure how many parents are willing to bestow that power to their kids on a long journey… or even across town. 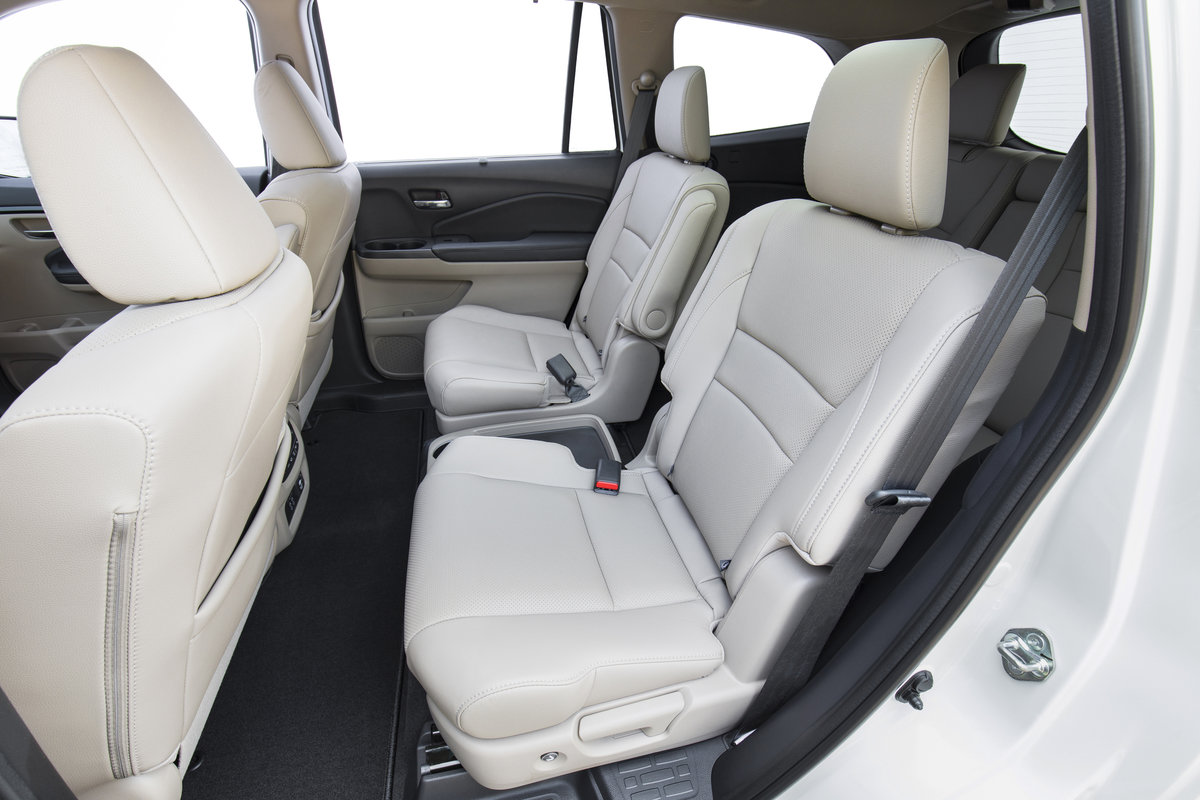 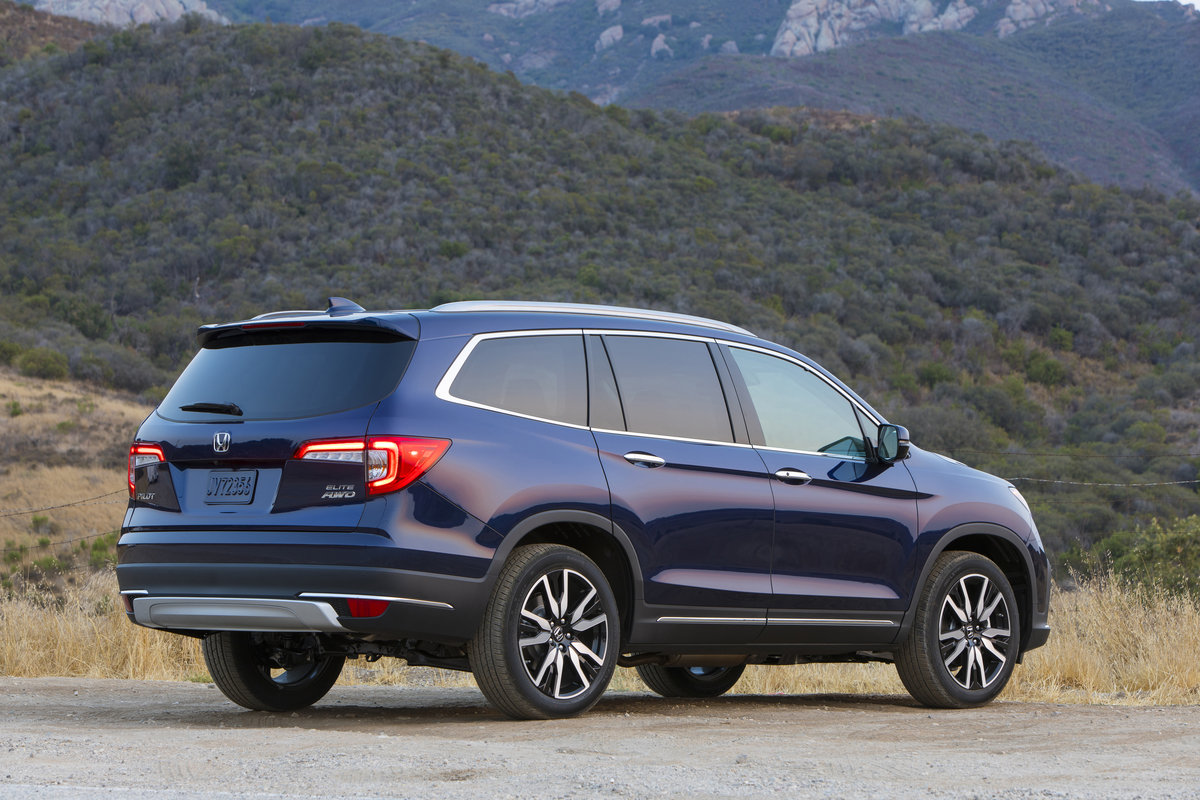 That starting price puts it in line with the Volkswagen Atlas, Nissan Pathfinder, and Kia Telluride, and it's about average for the starting price of a new 3-row SUV. The Pilot Black Edition pushes the top end up as one of the more expensive options in the segment, but the EX and EX-L trims represent solid value. They provide plenty of content at a reasonable price point for the class.

Have you driven a 2020 Honda Pilot?
Rank This Car

Can A Car Be Shipped To Me

nearest model is 400 miles away. How is shipping/transport arranged

12 views with 5 answers (last answer about a year ago)

How do I program my garage door opener on a 2020 Honda Pilot Elite?