Looking for a Used Sierra 2500HD in your area?

The GMC Sierra 2500HD Denali drives great and is loaded with features, but its fit and finish don’t live up to “luxury truck” billing. 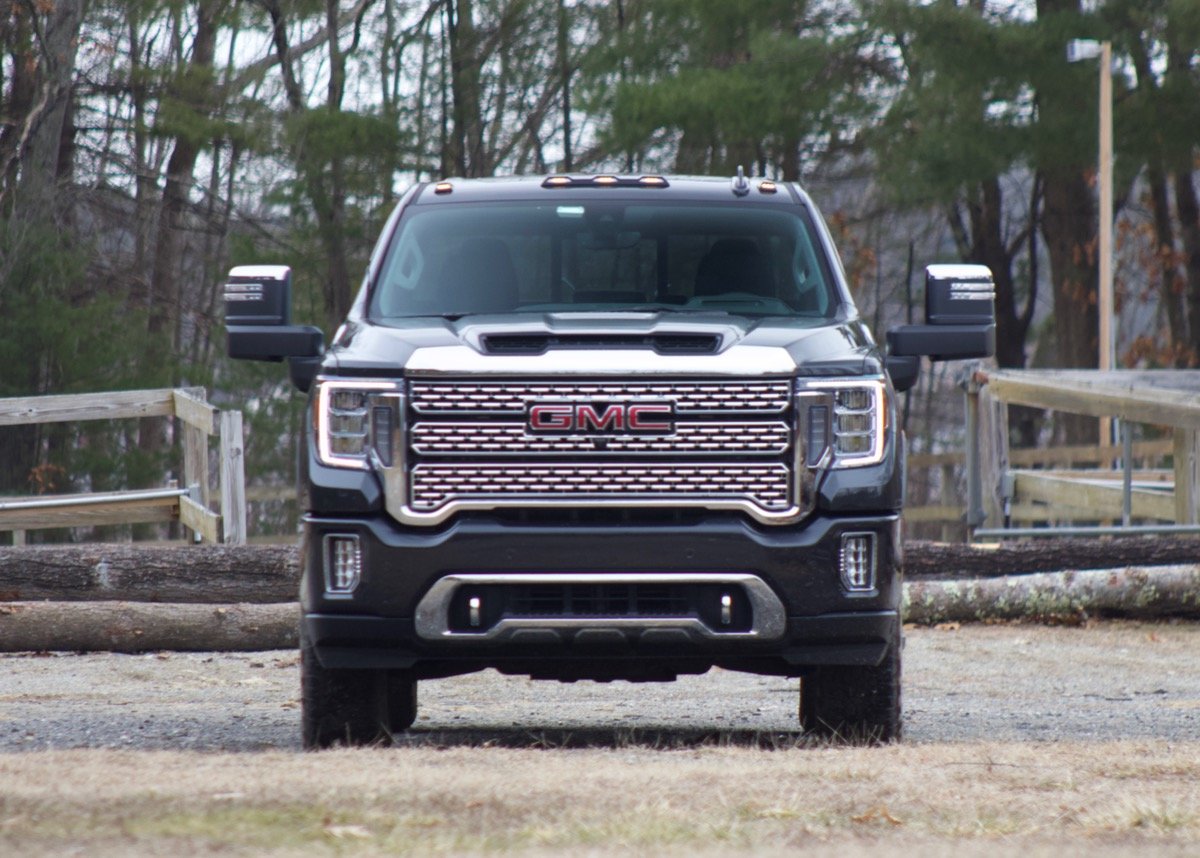 Few automakers have developed sub-brands with as much recognition as “Denali.” More than just a trim level, it’s a luxury brand with its own identity, somewhat separate from the rest of the GMC “Professional Grade” lineup. Today, GMC offers a Denali trim on every model, from the midsize Canyon pickup to the full-size Yukon SUV. The Denali treatment extends to the 2020 GMC Sierra 2500HD, too. Not only is it one of the most expensive trucks on the U.S. market, but it’s also one of the most capable and upscale trucks offered by General Motors.

Trucks are more comfortable than ever and you can thank the Denali for many of those creature comforts becoming commonplace. But the Sierra Denali does not stand alone. Both Ford and Ram offer upscale pickups, and in the past decade or so, they’ve gotten a lot better at it. Ram has done a whole lot of innovating when it comes to trucks as well. Has the Denali has been overtaken by the competition that it helped create? 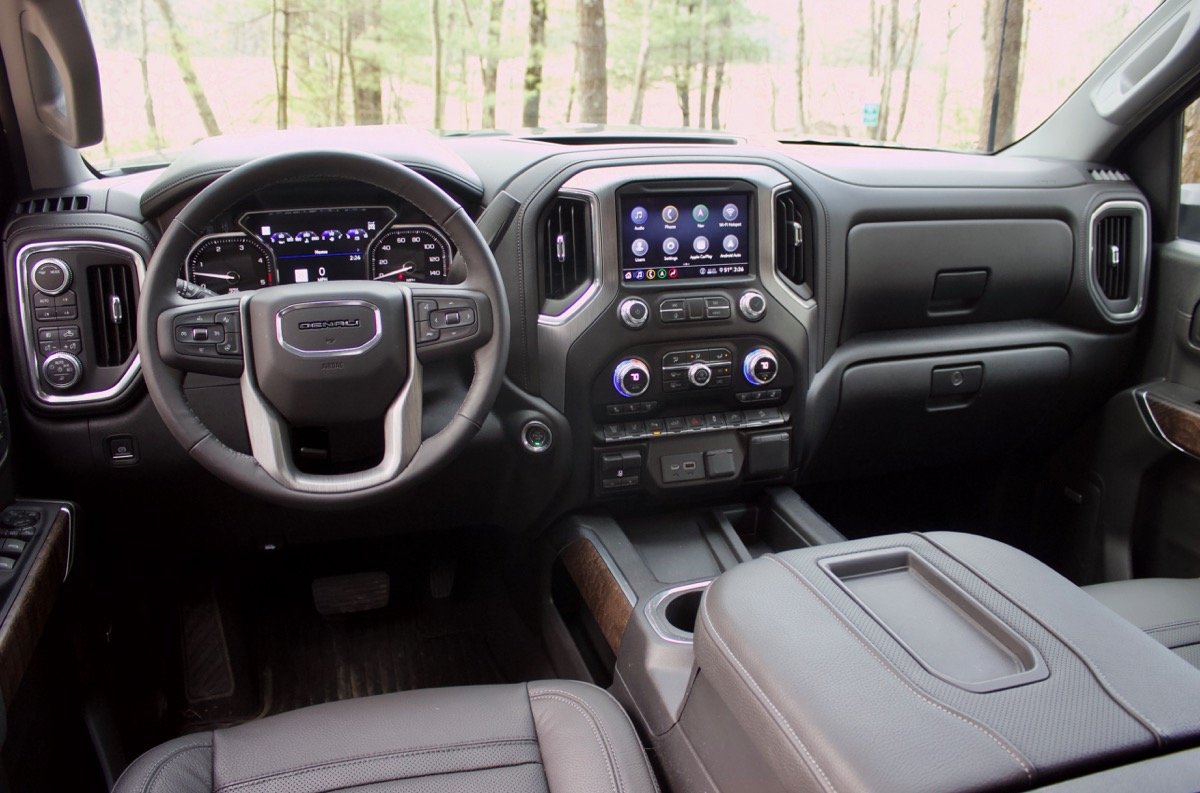 While I’ve previously praised the 1500-level Sierra for having a manageable size (for a full-size truck), the HD lineup's insistence of function over form results in a truly massive scale. No matter if you're looking at a base trim or a luxurious Denali, all versions of the Sierra 2500HD are ready for serious work at a moment’s notice. The massive grille feeds the multiple radiators for the hard-working engine and other sub-systems.

The Denali is distinct from the rest of the 2500HD lineup with its expansive use of chrome, including the seemingly football-field-sized chrome grille. The wheels are purposeful 8-lug units, but they’re still chrome. GMC offers the Denali in a number of premium exterior colors, but we suspect the most popular will be the now-synonymous-with-the-trim Onyx Black. With all these over-the-top touches, the 2500HD Denali is one of the flashiest trucks you can buy from General Motors, and I’ll still take it over most versions of the Chevrolet Silverado 1500 or 2500. Sure, art is subjective, but the derision for the Chevy truck design has been nearly universal… and warranted.

Trims for the Sierra 2500HD start with the Base—GMC calls this the “Sierra.” Above that trim level, you have the SLE, the SLT, and the range-topping Denali we’re driving. The base truck comes standard with a V8 engine and a 7-inch touchscreen with Apple CarPlay and Android Auto. After that, frills for the base are pretty minimal. You might want to look to the SLE or SLT trims.

Inside, the SLE adds a 4.2-inch color driver-information screen in the center of the instrument panel, replacing the 3.5-inch monochromatic information display in the base truck. Other upgrades found on the SLE include a standard 4G LTE WiFi hotspot, cruise control, carpeted floor covering, remote keyless entry, and a leather-wrapped steering wheel.

The SLT is the next trim up, and it's a solid blend of more upscale features without Denali prices. It adds 18-inch aluminum wheels with black accents, LED bed lighting, LED fog lights, and chrome door handles and mirror caps. The SLT also includes a power-release tailgate as well as GMC’s exclusive Multi-Pro six-way tailgate.

The SLT also provides a host of cabin upgrades, including 10-way power-adjustable front seats, wall-style power outlets in the cab and in the bed, and the upgraded 8-inch infotainment touchscreen.

The Denali has a full leather interior with wood-grain inserts in the door and center console. Other upgrades include the aforementioned chrome adornments, navigation, wireless device charging, and a Bose premium sound system with a Richbass subwoofer. This is in addition to all the content from the base, SLE, and SLT trims.

But for all the content provided on the Denali, it’s cabin remains just so-so. The fit-and-finish is lacking, as is the feel of the materials. Spend any time in a Ram 2500 Limited, and you’ll find extensive use of soft-touch materials. That’s not a requisite for a truck, but you should know where the bar is set.

At the end of the day, the Denali is still based on the workingman’s Sierra 2500HD, and this truck puts function above all else, including luxury.

Of course, that simplicity has its upsides, especially when it comes to pickup trucks. No matter whether you get into a Sierra or a Silverado, a Denali or Z71, all trims and models have similar radio and climate controls. A luxury sedan might stand out with needlessly complex controls, but in a truck, that’s an impediment. 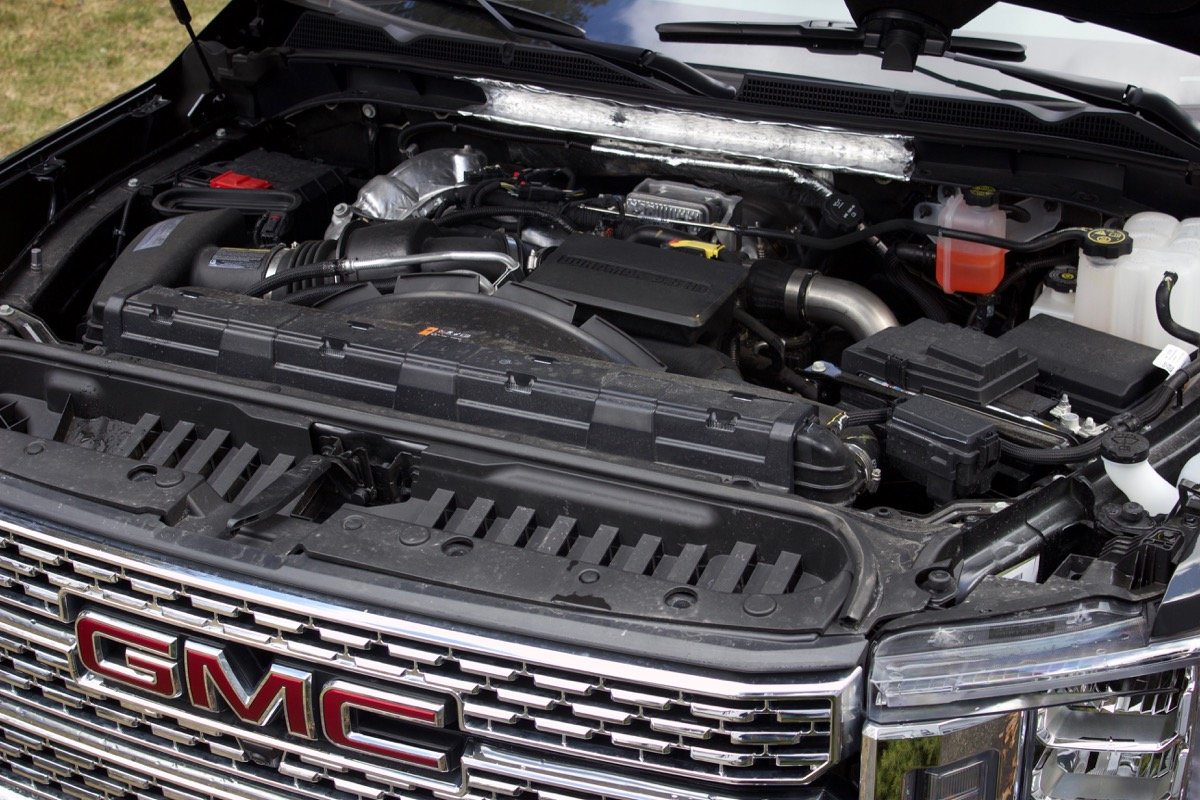 The Sierra 2500HD offers two big V8 engine options: one gas and one diesel. On the medium-duty Sierra 1500 we recently tested, there are a number of engine options, including a V6, V8, and even a turbocharged 4-cylinder, but in the Heavy Duty realm, only V8 power will do.

In the case of the 2500HD, both gas and diesel engines displace 6.6 liters, but power outputs are different. The gas V8 makes 401 horsepower and 464 pound-feet of torque. The Duramax diesel V8 cranks out 445 hp and 910 lb-ft. That really is absurd, stump-pulling grunt, and the diesel truly feels like it’s never going to run out of power. At low speeds, you can chirp the tires without even trying, and at highway speeds, it accelerates like a 2,500-pound sports-car.

Despite that getup, it’s still a massive, heavy truck with a poor turning radius. This is not a knock on the truck, it’s just a reality of trucks of this size and capability. The standard reversing camera offers guidelines that turn as you turn the wheel, but those lines are pretty optimistic. Expect 3-point-and-greater turns every time you have to turn around, and there will often be some planning involved. Definitely think twice before driving this truck into the city.

When properly equipped, the Sierra 2500HD can tow up to 18,510 pounds (with a 5th wheel or gooseneck connection) and haul a payload of up to 3,979 pounds. If you need more capability, look to the Sierra 3500HD, where those numbers leap to 35,500 and 7,442 pounds, respectively. GMC provides helpful trailering apps in the infotainment system, as well as the ability to mount a camera on your trailer so you can effectively see through it while you are towing.

Trucks like this don’t have to state their EPA fuel-economy estimates, but we can still get an idea from the trip computer. In our week of combined city and highway driving, we observed an average of 16.5 miles per gallon. 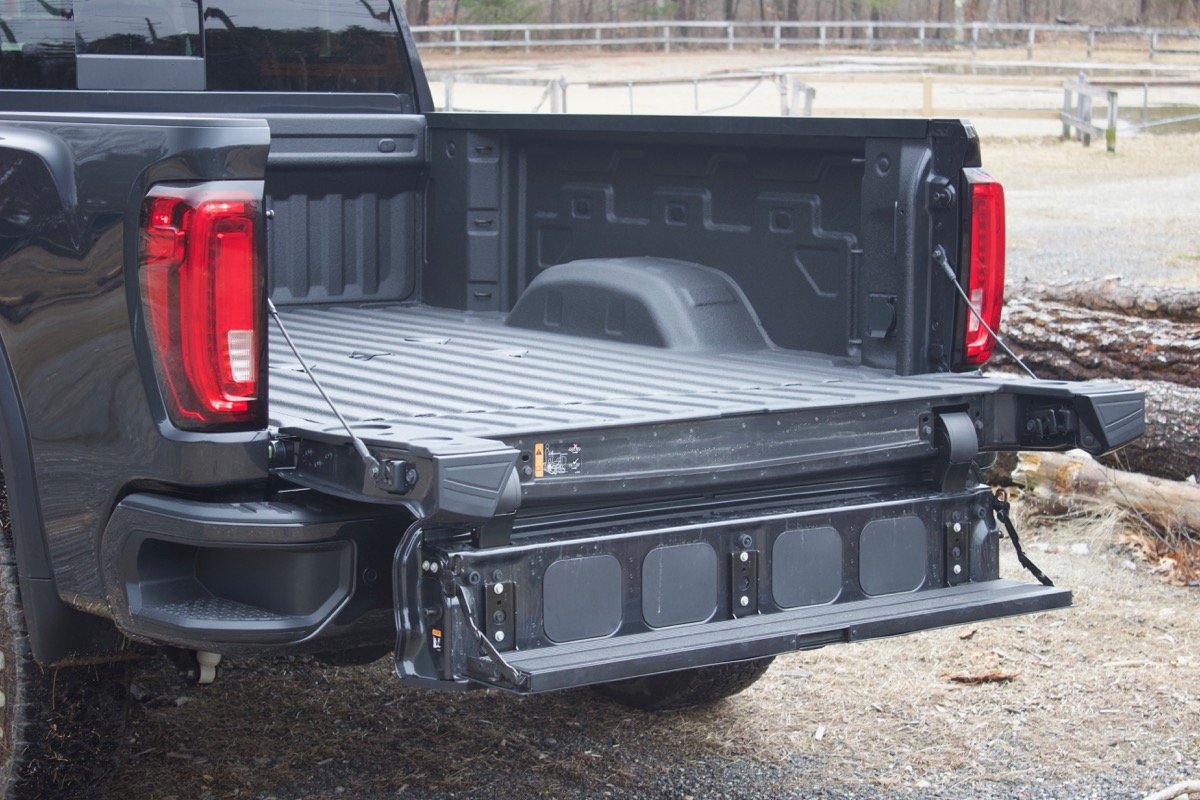 Both bed sizes come with the incredibly helpful bed corner steps at the rear bumper, as well as the steps ahead of the rear wheel well. Steps like these have been included on GM trucks for the past several years, but for this new generation of the truck, they have been expanded to receive a larger work boot.

Our test truck came with the EZ lift-and-lower tailgate, which has a remote release both on the key fob and in the cab of the truck. Our test truck also came with the available MultiPro tailgate. This is one of the most fascinating developments in the arena of trucks. There are six different configurations; one of the best is the massive step it provides into the truck bed.

Inside, the 2500HD has plenty of room and is festooned with plenty of cubbies, cupholders, bins, etc. On SLT-and-up trims, there is a helpful storage area below the rear seats, which fold up to make stowing of larger items easier. 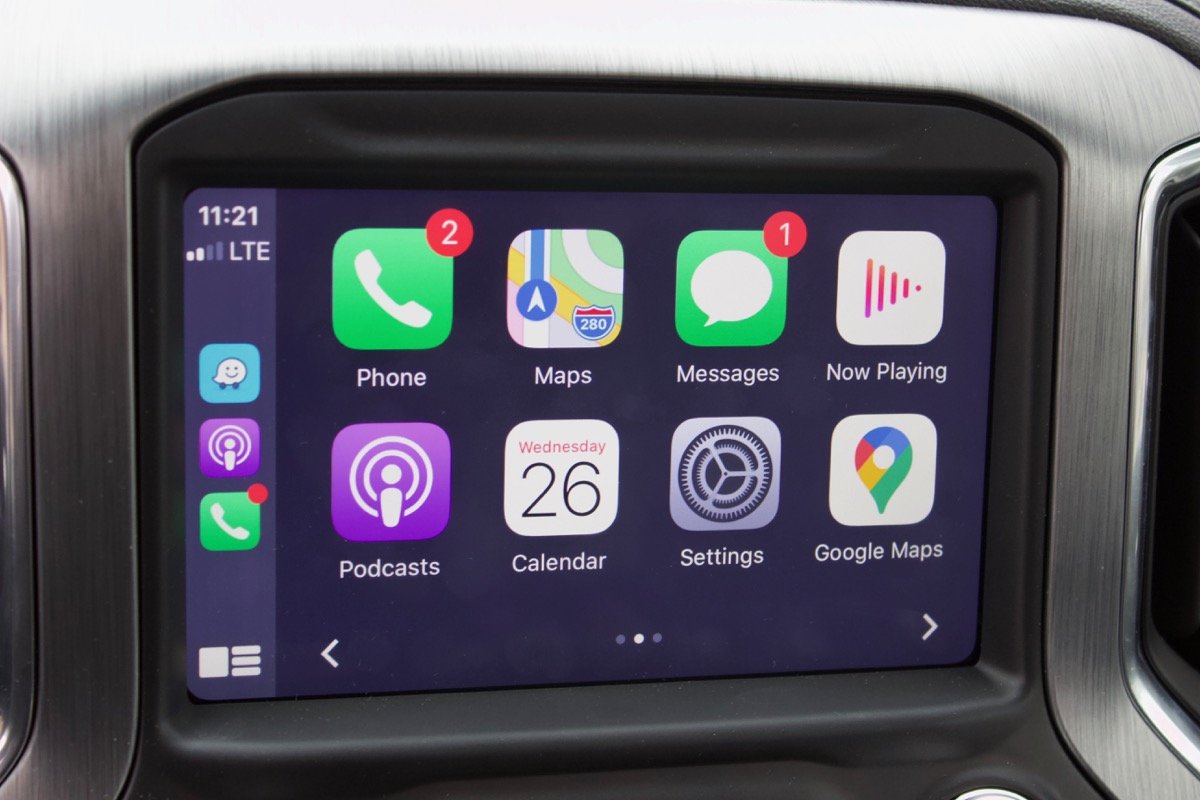 The Sierra 2500HD comes standard with a 7-inch touchscreen running GMC Infotainment 3, which is essentially an evolution of GMC IntelliLink. It has large icons that are actually customizable. Simply hold your finger on the icon and drag it, just like on your mobile device. This setup also comes with Apple CarPlay and Android Auto, which you activate by connecting your phone via USB.

The SLT and Denali trims come with a slightly larger 8-inch infotainment screen, and both are available with navigation. The Denali also comes with a large 8-inch color driver-information screen in the instrument panel, spanning the space between the speedometer and tachometer.

The infotainment is very easy to use, and while it might be modest compared to the massive screen in the new Ram 2500 Limited, the Ram system might be a bit over-the-top. GMC provides the right tech in the right packaging. 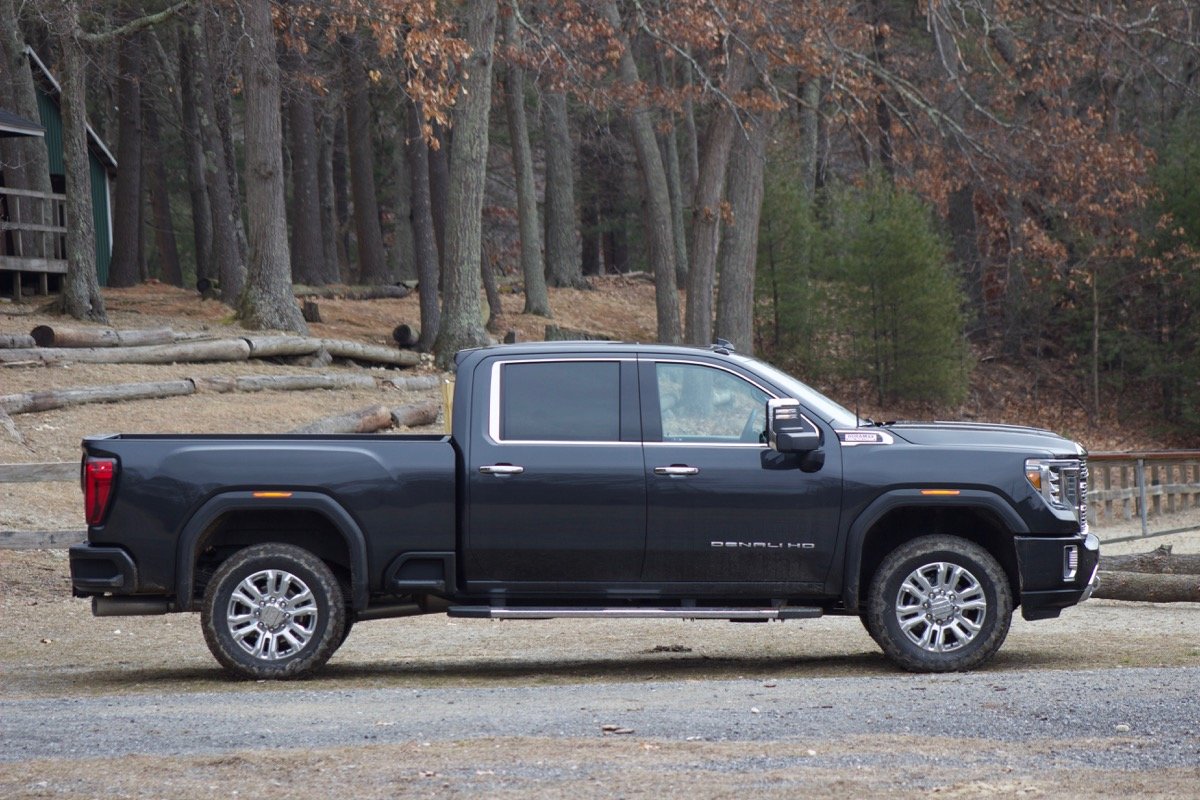 This truck is simply massive, and that size does present safety concerns. As mentioned, its turning radius is not ideal. When combined with the massive overhangs, this truck is a bit of a bear to maneuver in and out of tight spaces. In the past, this might have been an issue, but the Sierra 2500HD Denali takes a lot of the stress out of it with cameras on all four sides, as well as the helpful two-tier trailering mirrors, which let you see all the way down the side of the truck to the road below.

Standard safety features include a full array of front- and side-impact airbags, traction control, a reversing camera, and a tire pressure monitoring system. Our test truck came with the Driver Alert Package I. This package added front and rear parking sensors, blind-spot monitoring, and rear cross-traffic alert. Given what we said about this truck’s size, you almost need all three to manage it, even in sparsely populated areas. Our Denali test model also came with the Driver Alert Package II, which added forward-collision avoidance, lane-departure warning, and automatic high beams. 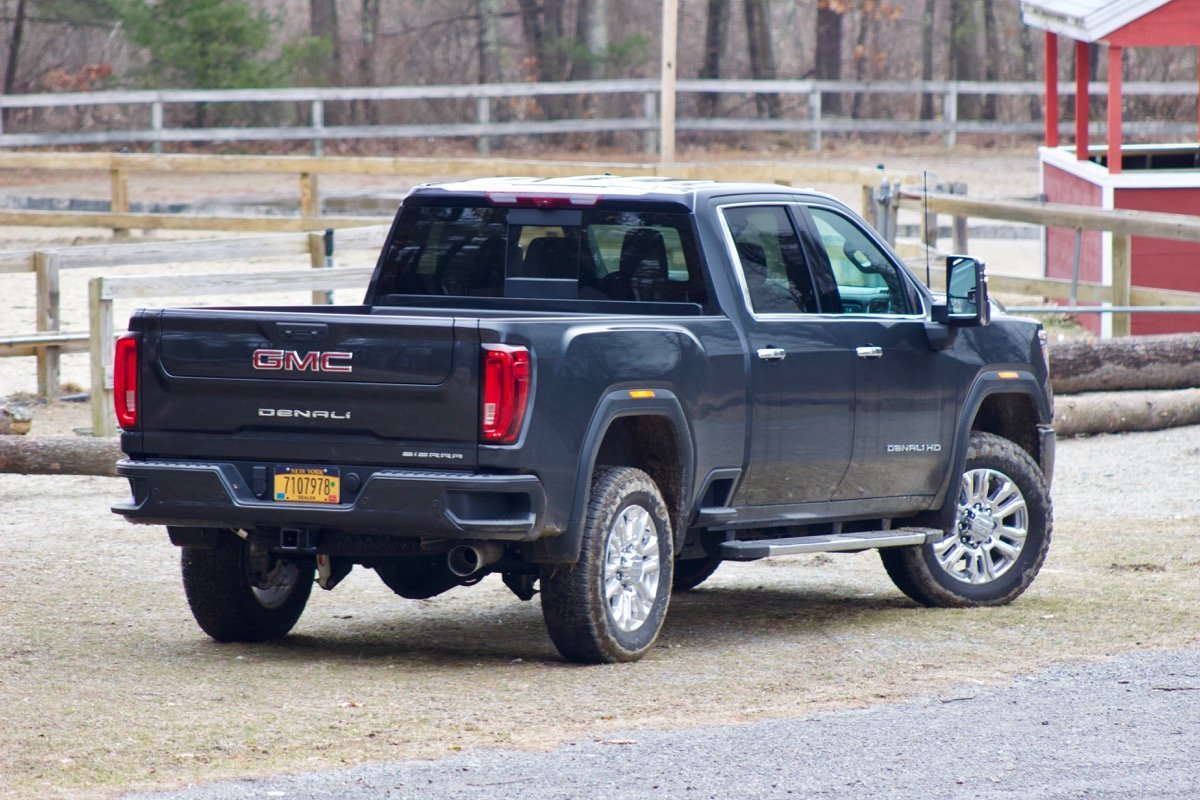 The SLE starts at more than $40,000, while the SLT starts at over $50,000. Considering most buyers will want the crew cab and standard bed, we’d recommend checking out the SLT trim with the standard gas engine. If you need the diesel, offset that cost by moving back down to the SLE trim. Both paths will cost about $54,000-$55,000, which is common pricing for a heavy-duty truck in 2020.

The range-topping Crew Cab Denali starts at $63,700, and there’s plenty more you can add, including the Denali Ultimate package. It includes more parking and trailering cameras, the head-up display (HUD), and the moonroof for about $2,800. Tack on that, the diesel engine, and a few other options, and our test truck came in at a whopping $78,955, including the destination fee.

So, who is buying a truck that’s this capable and this comfortable? You’d think the daily driver truck-owner wouldn’t need a heavy-duty pickup, and on the flip side, most HD trucks are purchased for tough jobs. But there is a whole class of well-heeled consumers who tow things such as horse trailers, boats, and camping trailers. Perhaps some are lucky enough to live on large, wooded estates or ranches. Just because they need to haul stuff around their property doesn’t mean they can’t do it in style. The whole “luxury truck” thing stopped surprising me a long time ago. There’s clearly a very expensive niche being filled by these trucks, and there doesn’t appear to be an end in sight.

Users ranked 2020 GMC Sierra 2500HD against other cars which they drove/owned. Each ranking was based on 9 categories. Here is the summary of top rankings.

Looking for a Used Sierra 2500HD in your area?

Why do I have to send a picture of my drivers license?

Why is it that the double cab trucks tow less than the crew cab trucks?