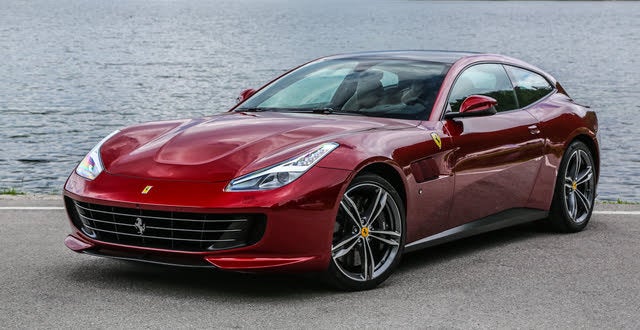 Until Ferrari’s upcoming SUV arrives, the closest thing to a utility vehicle coming from Maranello is the GTC4Lusso. First introduced in 2011 as the FF, Ferrari’s four-seater hatchback boasted V12 power and a highly sophisticated all-wheel drive (AWD) system. Ferrari revised the car and cleaned up its styling in 2016, renaming it the GTC4Lusso in the process. The GTC4Lusso sells in small quantities, and for 2020 it gets no major changes. It's offered in two major trims, the GTC4Lusso covered here and the rear-wheel-drive (RWD) V8-powered GTC4Lusso T, which we cover as a separate model.

While most AWD automobiles feature a transfer case, the GTC4Lusso comes with a system that puts power to the wheels directly from either side of the engine. The wheels up front get their own 2-speed transmission coupled to the front of the engine, while the rear wheels are powered conventionally. The V12 drives the front wheels below fourth gear or 80 mph, but at faster speeds the power goes to the rear wheels only, so the GTC4Lusso is effectively a RWD car when doing high-speed driving. Four-wheel steering, magnetorheological dampers, carbon ceramic brakes, and Ferrari’s Slip Slide Control system round out the GTC4Lusso’s high-tech handling credentials.

The inside of the GTC4Lusso is a typically Ferrari space, and that means its cockpit is driver-oriented but also comfortable and awash with high-quality materials. The dashboard includes a large central tachometer flanked by instrument displays and a 10.3-inch infotainment screen in the center. An optional 8.8-inch screen can also go in front of the front passenger. Active safety features are largely absent from the equipment list. There is room in the back for two adults, and the back seats fold down to give an impressive (especially by Ferrari standards) 28.3 cubic feet of cargo space.

With AWD, room for four people, and ample cargo room, the GTC4Lusso is the most practical car in the Ferrari range today and the one most suited to daily-driver duty. For people who can live without AWD and settle for “just” 602 horsepower, the GTC4Lusso T is a tempting alternative with nearly identical looks and nearly as much performance but a significantly lower price tag. Otherwise, there isn’t anything else on the road quite like the GTC4Lusso.

What's your take on the 2020 Ferrari GTC4Lusso?

PixelDust Without question, it (and its predecessor, the FF) are the singularly most underappreciated automobiles in the Ferrari back catalog (the Mondial being the only scrub lower on the evaluation pole). Gifted with the most sophisticated suspension ever engineered for a Ferrari, propelled by the engine-from-the gods Ferrari's naturally aspirated V12 in all of its emotional glory. I am ever grateful for its critics, those who will trash it once the Purosangue arrives in its (never from Ferrari) four-door platform, for they continue to push its resale into the basement, where I will find my chosen good example and drive it until I collapse from old-age and happiness.

Have you driven a 2020 Ferrari GTC4Lusso?
Rank This Car