We take the refreshed 2020 Audi Q7 on a 1,000-mile family road trip to see whether changes and updates keep this SUV competitive. 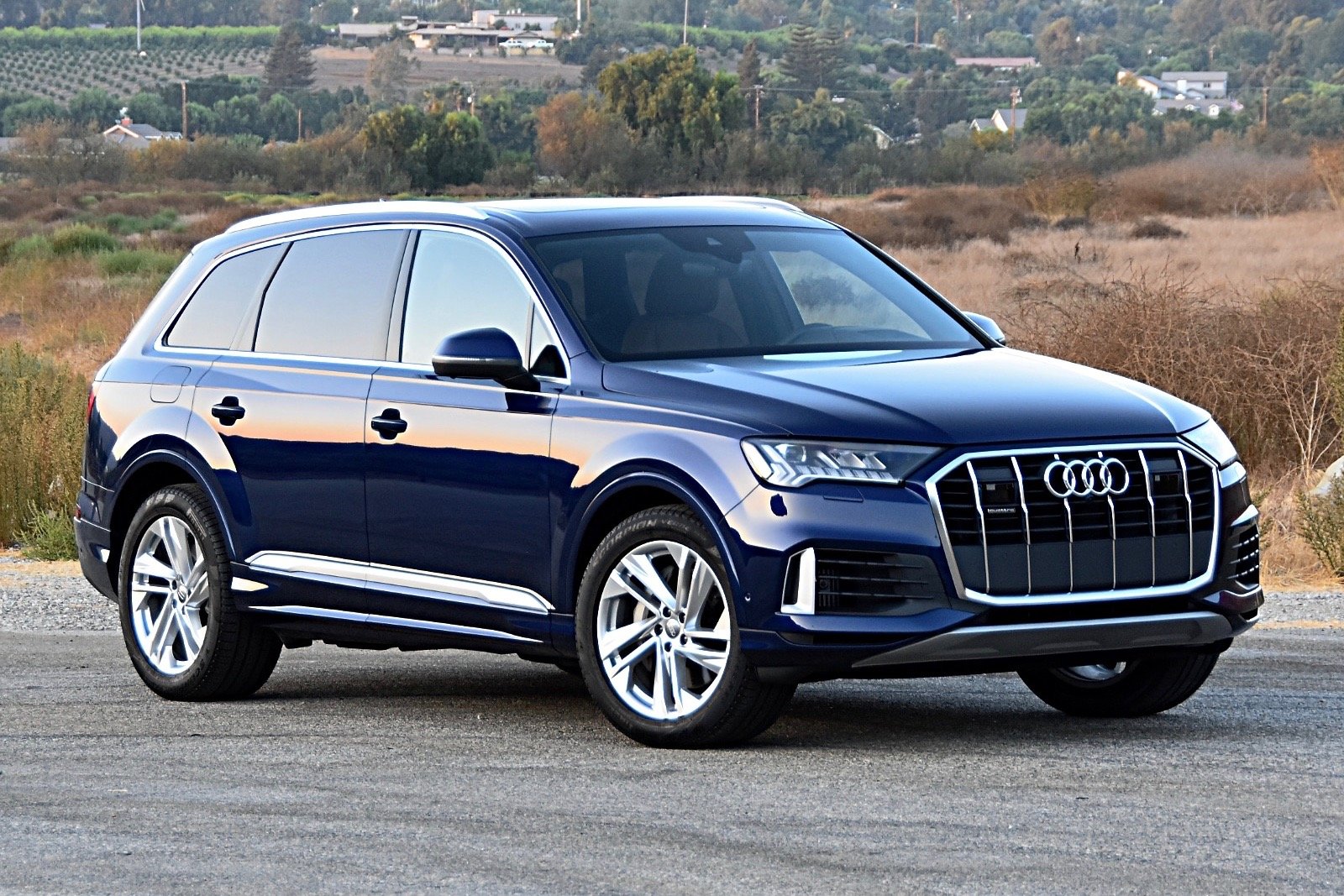 From its styling and interior to its powertrain and technology, the 2020 Audi Q7 gets a thorough update that brings it in line with other high-end cars and SUVs wearing four chrome rings on their grilles. Simultaneously, the changes for the 2020 model year keep this Audi competitive against the BMW X5 and Mercedes-Benz GLE-Class, its primary rivals in the midsize luxury SUV class. We packed a Q7 Prestige full of family and luggage and set off for Lake Tahoe to assess this Audi’s improvements on the open road. 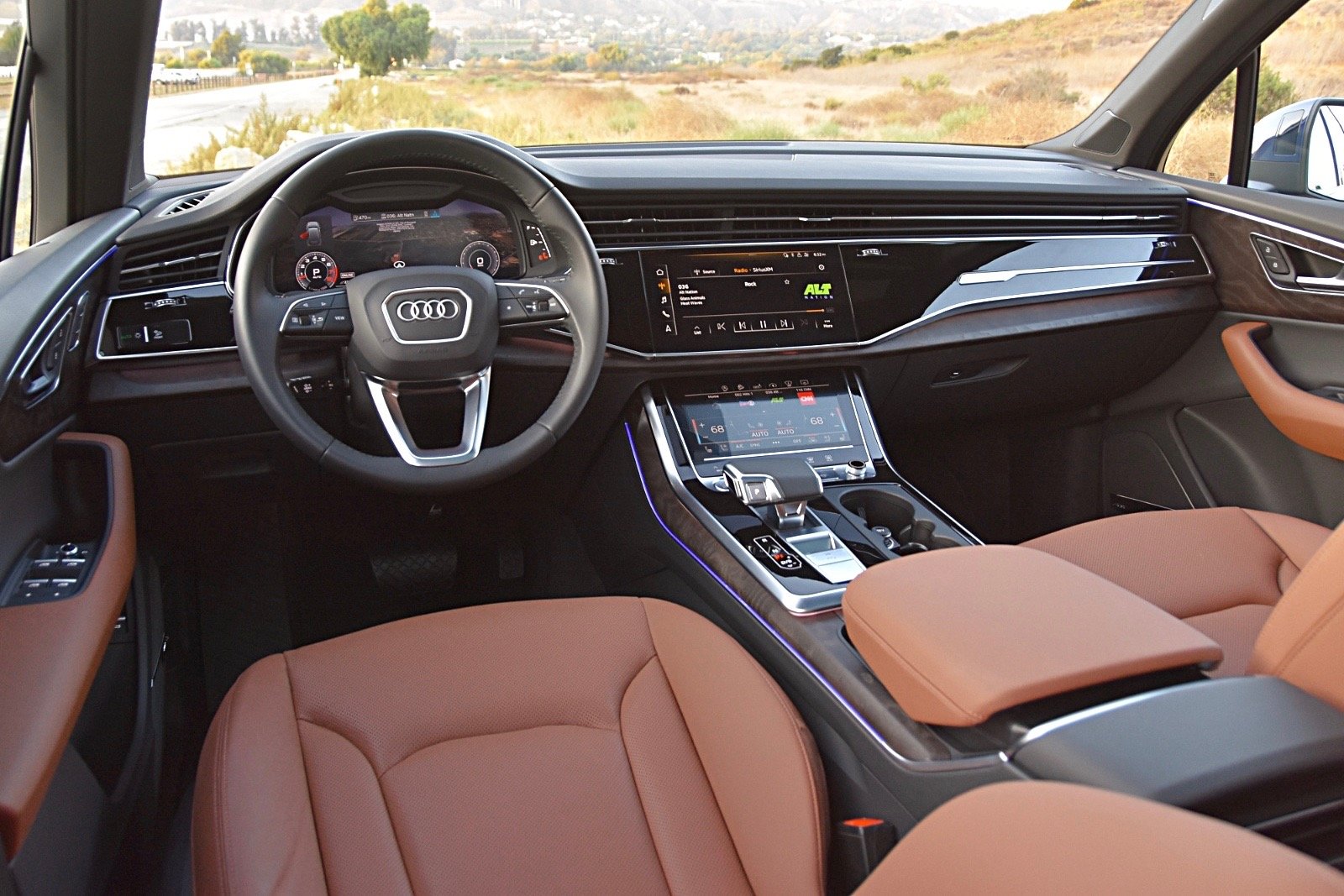 For this evaluation, we examined the Q7 55 TFSI, which starts at $60,800. The Q7 is available in Premium, Premium Plus, and Prestige trim levels, and the test vehicle had the Prestige upgrade. Additionally, Audi equipped it with Navarra Blue metallic paint, a Cold Weather Package, and a Towing Package, bringing the total price to $74,290, including the mandatory $995 destination charge.

Inside, the Q7 is much the same as it was, except it adopts the dashboard and instrumentation from the high-tech Q8. Most physical controls are banished, replaced by three digital displays. Audi’s now-familiar Virtual Cockpit panel provides instrumentation via three different themes, two viewing styles, and a range of configurations. Additionally, two touch-sensing screens reside on the center console and handle infotainment functions—while serving as magnets for dust and fingerprints.

Decked out in Okapi Brown leather with Gray/Brown Fine Grain Ash natural wood inlays and a no-cost black cloth headliner, the test Q7’s cabin was both upscale and high-tech in appearance. At night, the Prestige’s standard multi-color ambient lighting added a soothing vibe to the ambiance. 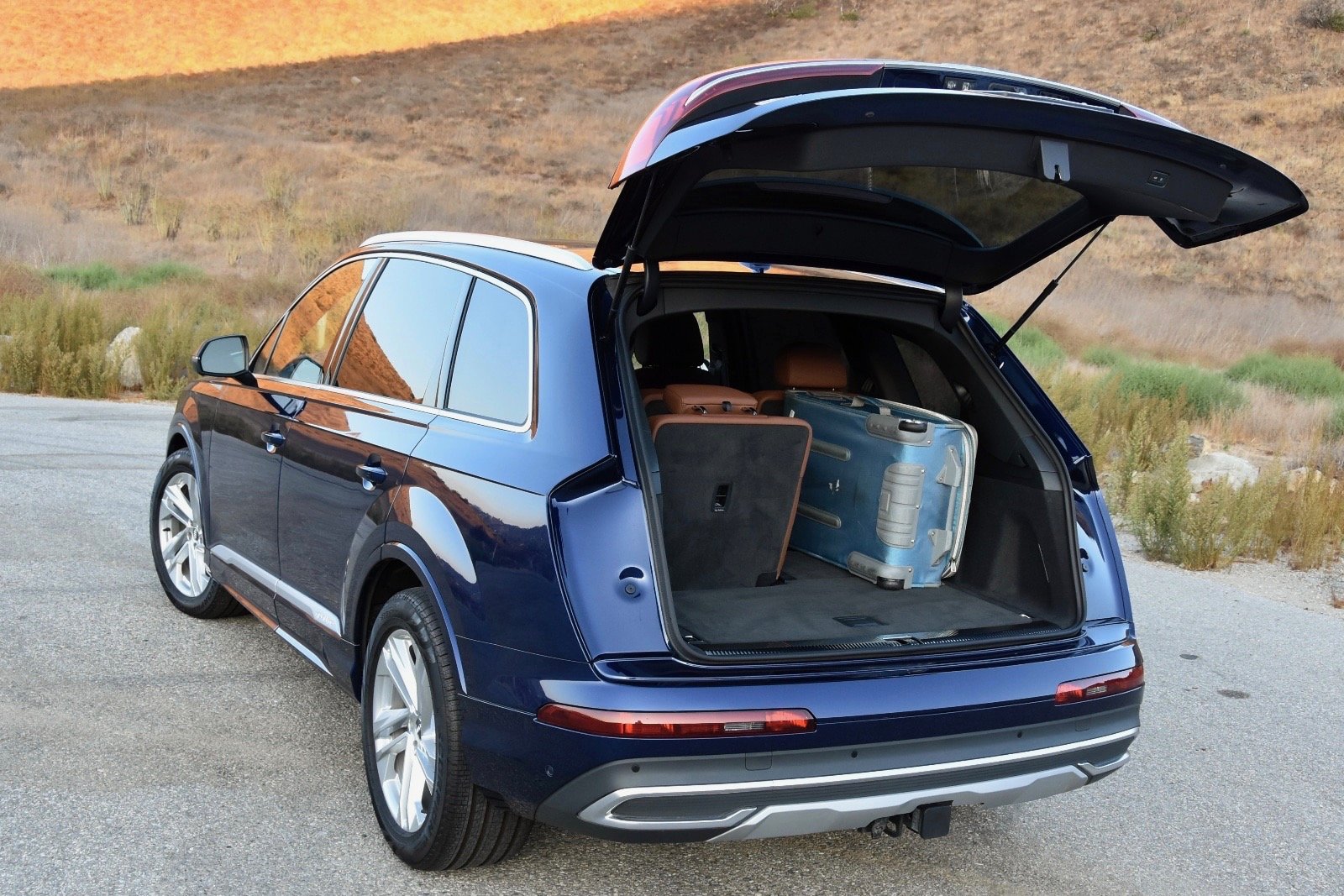 A new 3.0-liter turbocharged V6 engine debuts in the 2020 Q7 55 TFSI. It generates 335 horsepower and 369 pound-feet of torque, the latter figure an improvement of 44 lb-ft that is available across a lower and broader rev range.

It also has a 48-volt mild-hybrid electrical system powered by a lithium-ion battery, which helps to conserve fuel. From the extended operation of the automatic engine stop/start system to coasting with the engine off, the 48-volt technology reduces the load on the turbocharged V6, in turn maximizing mileage.

According to Audi, the 55 TFSI drivetrain hustles the 5,082-pound SUV from zero to 60 mph in 5.7 seconds. The maximum tow rating is a substantial 7,700 pounds, and the EPA says the Q7 should get 18 mpg combined. During our road trip, the SUV averaged 21 mpg. On a local fuel-economy loop, it returned 18.1 mpg.

In addition to 20-inch wheels, the Prestige trim includes an adaptive air suspension. Audi Drive Select adjusts the firmness settings, and the driver can alter the suspension height using different Standard, Dynamic, Loading, Lift, and Off-Road selections. During a short jaunt on a trail that would challenge many crossovers, the Q7 had no trouble when placed in its Allroad drive mode and Off-Road suspension settings.

We spent most of our time on the pavement during our road trip, where the Q7 55 TFSI supplied speedy acceleration. In both Comfort and Auto driving modes, somewhat lazy off-the-line response to throttle input was a regular occurrence. Switching to Dynamic mode eliminated that characteristic. Altitude had little effect on engine performance, the turbocharged Q7 quickly gathering speed to pass slower vehicles struggling with the Sierra Nevadas Mountains' thinner atmosphere.

While driving around the Lake Tahoe region, the mild-hybrid technology operated transparently. Despite the long, interminable, traffic lights of South Lake Tahoe’s business district, during which the Q7’s engine shut off for extended periods to save fuel, the test vehicle’s four-zone climate control never quit blowing cold air, thanks to the 48-volt electrical system.

All-wheel steering is available for the 2020 Q7, but the test vehicle did not have it. Regardless, Audi’s SUV proved agile in town, athletic on the winding roads ringing Lake Tahoe, and planted at prevailing speeds on California freeways.

Perhaps most noticeable, however, was how quiet the cabin was thanks to the Prestige’s standard dual-pane acoustic side window glass. Even when riding in the back seat while the SUV is cruising at 80 mph, the relative silence is remarkable.

Overall, the Audi Q7 is a well-rounded luxury SUV, offering responsive acceleration and significant towing capacity while providing decent off-roading capability and good fuel economy. Plus, it is genuinely enjoyable to drive when the journey includes twists and turns. 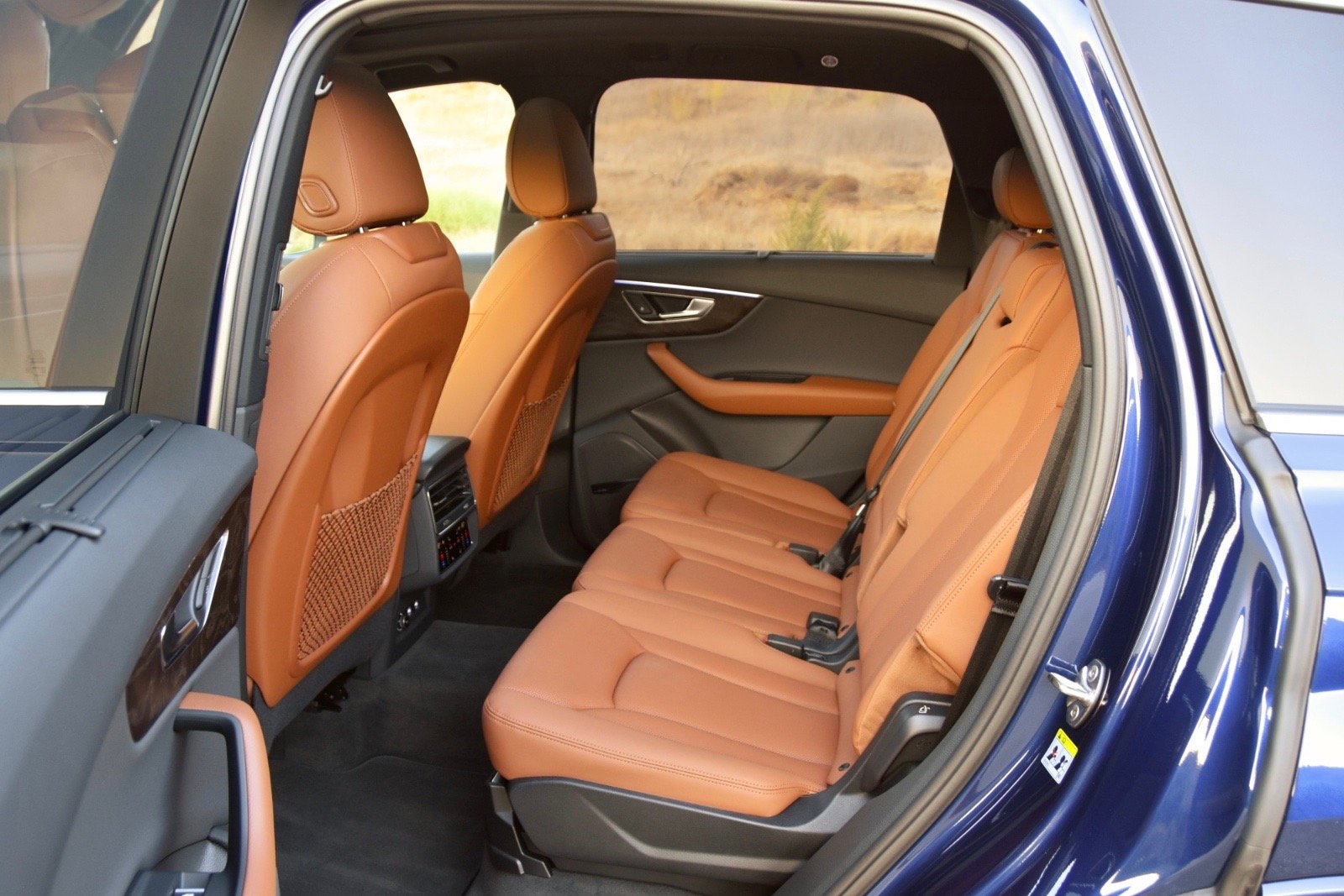 Though it includes three rows of seats and seven-passenger capacity, the Audi Q7 is best used as a five-passenger vehicle. Yes, we did climb into the third-row seat to make this determination. No, we were not happy about it.

Suitable only for young children, the third-row seat has a flat, featureless cushion. To use it, even for kids, you’ll need to slide the second-row seats forward a few clicks. Plus, when the third-row seat is in use, cargo space pretty much evaporates. As such, leave it folded down, and expand cargo capacity from a meager 14.2 cubic feet to a useful 35.7 cubic feet. Fold both rows of seats for a maximum of 69.6 cubic feet of cargo space.

With a family of four aboard for days on end, the Audi Q7 is quite comfortable. Though the test vehicle did not have the desirable Luxury Package with its premium leather and massaging front seats, the Prestige trim’s standard eight-way power-adjustable, heated, and ventilated front chairs were nevertheless agreeable for hours at a time.

If there is a significant shortfall in the Audi Q7’s form and function attributes, it pertains to practical interior storage. There isn’t any. Under the center armrest, the Audi Phone Box wireless smartphone charger and signal booster take up plenty of precious space, leaving room only for a pair of sunglasses. The console offers two narrow cupholders and nothing more, the lower dashboard screen and associated functions taking up what little real estate might be available. That leaves the glove compartment and the door-panel bins for the personal items you carry regularly.

In the second row, occupants can use netted storage on the front seatbacks and door-panel bins. A set of cupholders also deploys from the center armrest. 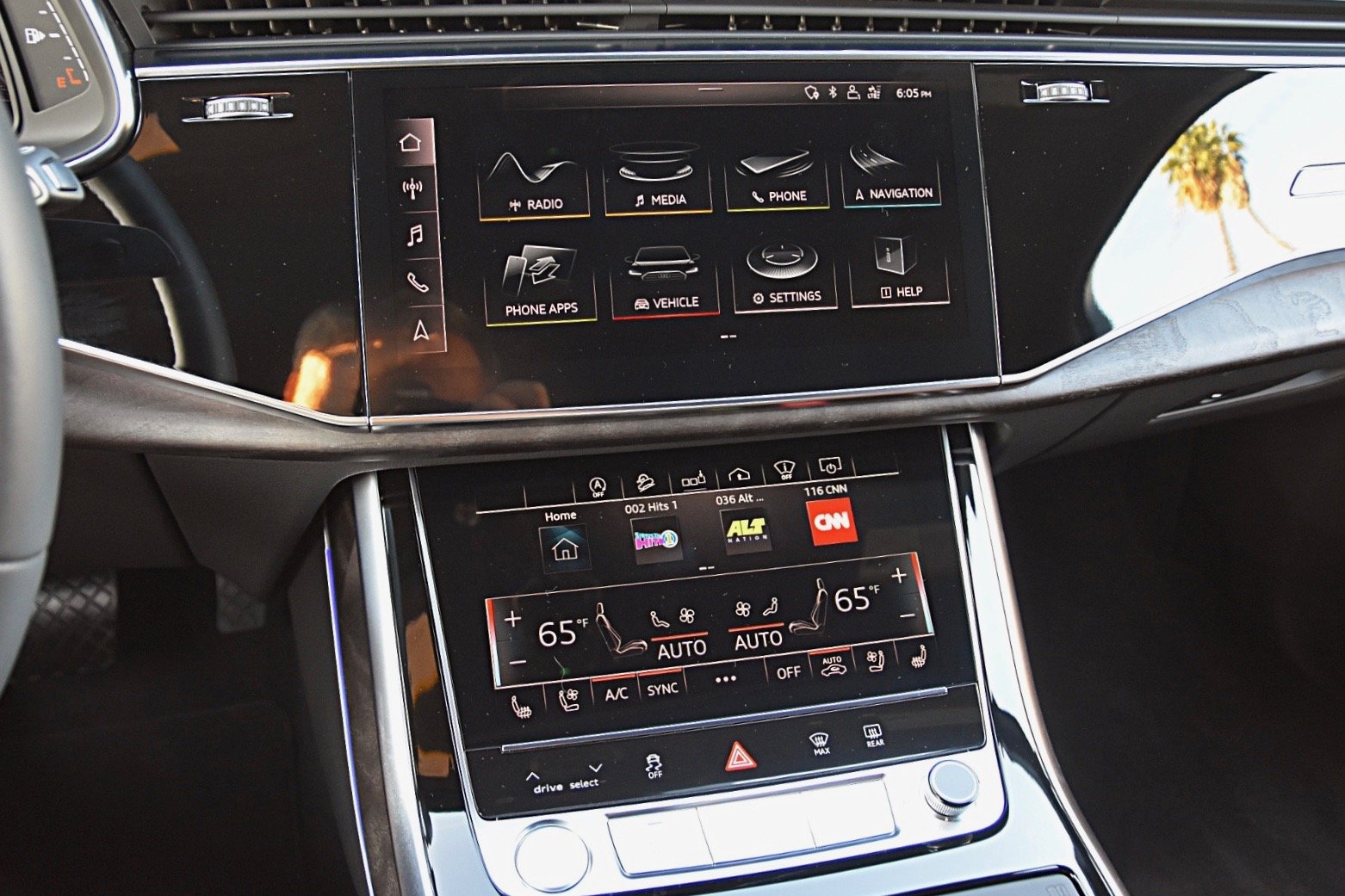 One of the significant changes to the 2020 Audi Q7 is its new Multi-Media Interface (MMI) Touch Response technology. It combines an upper 10.1-inch touchscreen with a lower 8.6-inch touchscreen to provide access to most of the SUV’s systems and settings. The system includes natural voice recognition, handwriting recognition, wireless Apple CarPlay and Android Auto smartphone integration, navigation with Google Earth imagery, and Audi Connect subscription services, including a 4G LTE WiFi hotspot.

Though imperfect, MMI Touch Response is an improvement over Audi’s traditional MMI setup previously used in this SUV. During our trip, dry fingertips, caused by either regular use of hand sanitizer or the low regional humidity (or both), often made the Q7’s virtual buttons unresponsive. Multiple tries were a regular occurrence.

Generally speaking, however, the user interface is intuitive, and once you’ve taken the time to set everything up to your preferences, you won’t need to interact with the screens too much. A knob controlling volume and tuning resides on the center console, and the voice-recognition technology is excellent, making it easy to get directions, change cabin temperature, choose a different radio station, and more.

Besides, many functions are unavailable to you while the vehicle is moving, such as password access to the 4G LTE WiFi hotspot. We made extensive use of this feature during our trip, the kids Zooming their classes from the road while parents worked to meet deadlines. Talk about remote learning and virtual officing.

The Prestige trim also includes a full-color head-up display, but if you’re wearing polarized sunglasses, it is invisible. The test vehicle also had a Bose premium sound system, one of the better examples of quality from that audio supplier. Evidently, Audi disagrees, and for 2021 it has swapped the Bose components for a 19-speaker Bang & Olufsen system. 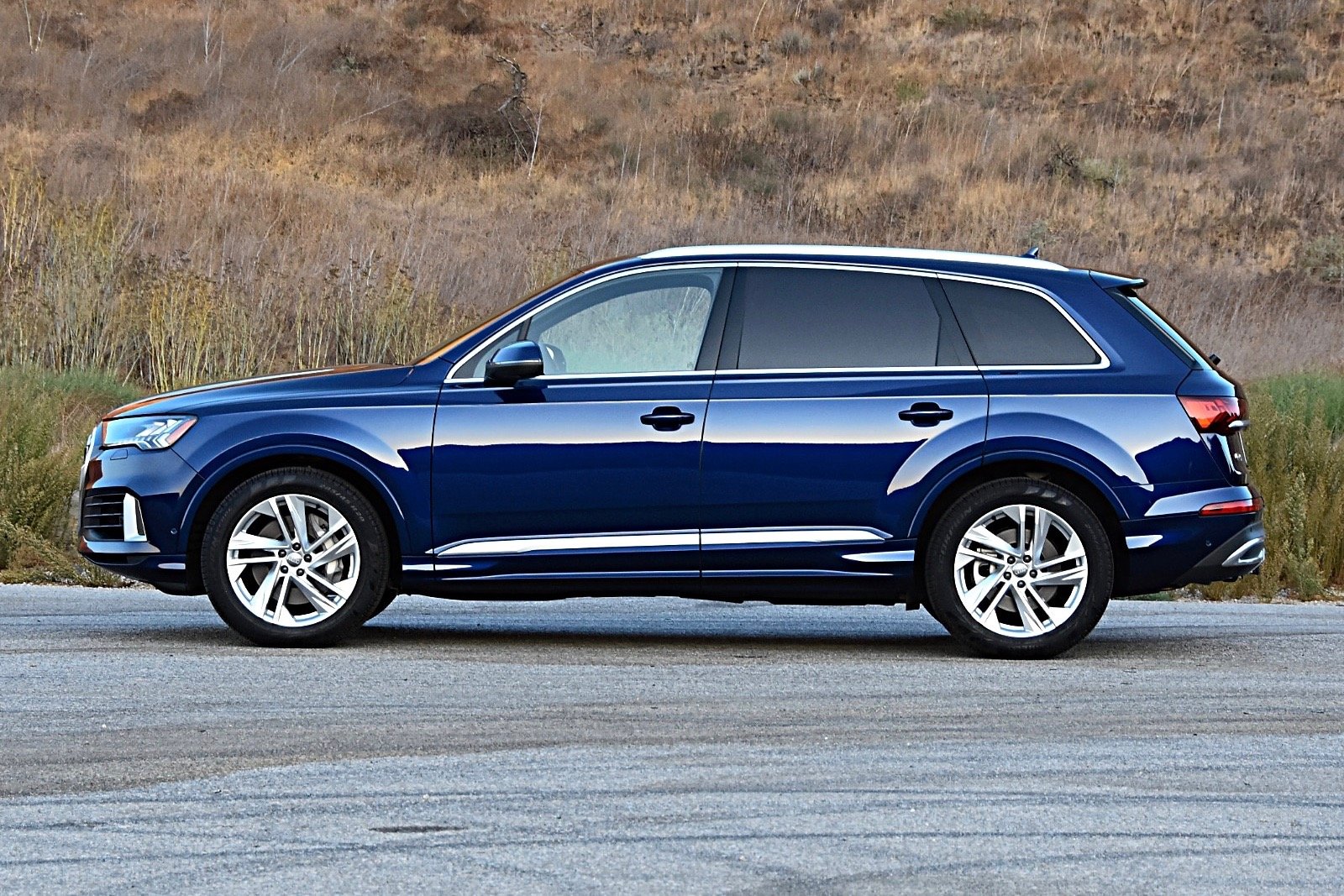 We kept night driving to a minimum, but during one trip up the lake to do some stargazing, we learned firsthand how utterly astounding the HD Matrix LED headlights perform. Thanks in part to their almost telepathic automatic high-beam function, they provided plenty of reassurance while threading the winding, and occasionally treacherous, two-lane roads on the southeast side of Lake Tahoe.

Note that the Insurance Institute for Highway Safety (IIHS) rates the Q7’s HD Matrix LED headlights as "poor," apparently because they cast an excessive glare at oncoming vehicles. That might be true, but when you’re traversing the narrow ribbon of blacktop running on the mountain ridge separating Emerald Bay from Cascade Lake, the Q7’s headlights are downright stunning in terms of their illumination capabilities.

Audi also equips the Q7 with numerous advanced driving-assistance systems (ADAS). For upgrades to the standard ADAS offering, choose the Executive Package with Premium Plus trim, or select the Prestige trim. Highlights include a new Emergency Assist function that detects an unresponsive driver and brings the Q7 to a safe stop; a Turn Assist function that detects unsafe conditions during left turns across traffic and prevents the driver from making a mistake; and Adaptive Cruise Assist with adaptive cruise control, traffic-jam assistance, and lane-centering assistance (Active Lane Assist).

For obvious reasons, we didn’t sample Emergency Assist or Turn Assist, but they are undoubtedly useful features. We did make enough use of Adaptive Cruise Assist to conclude that we did not like the technology.

In and of itself, the adaptive cruise control works fine. The traffic-sign-recognition technology is the problem. For example, on a 70-mph freeway, as we approached a mountain grade, a sign warned trucks to descend at 35 mph. Guess what? The Audi read that 35-mph warning and immediately applied the brakes. Thankfully, nobody was behind the Q7 at the time. This situation was not the only time this problem cropped up, either because the traffic-sign recognition system read a sign that wasn’t pertinent, or it failed to read a sign that was. It was, however, the main reason we quit using cruise control during the trip.

Similarly, the Active Lane Assist technology proved displeasing. Too often, it felt like it had a mind of its own. And it was not well suited to sections of California 395 with passing lanes, getting confused as the road widened and tapered. Thankfully, this is easy to turn off using a button on the end of the turn signal stalk.

In terms of collision protection, the IIHS gives the Audi Q7 the highest ratings. Only the "poor" headlight assessment prevents the SUV from earning a "Top Safety Pick+" nod. 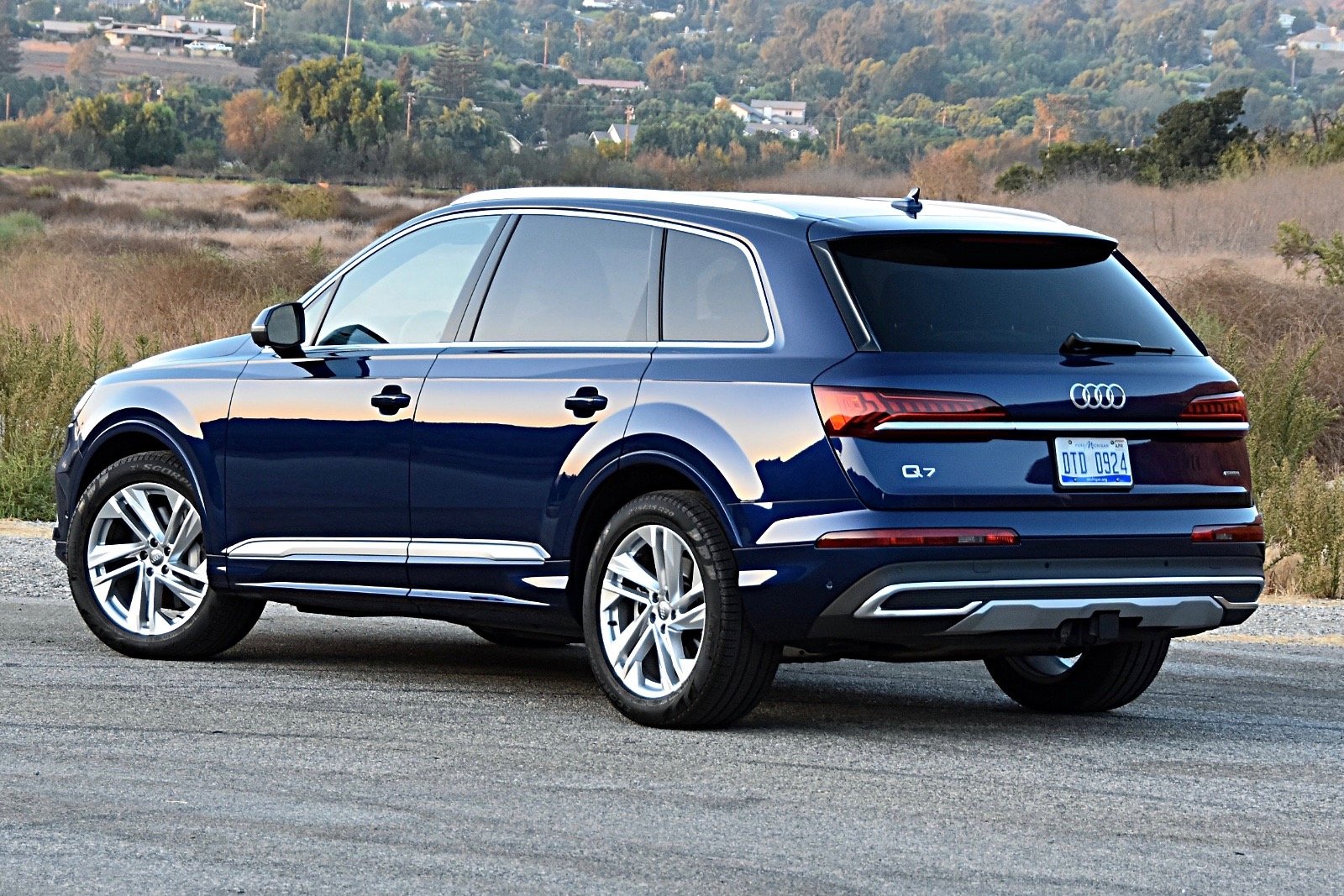 Audi typically plays a strong value card when lined up against its primary competitors from BMW and Mercedes-Benz. Offering more for less, the Q7 is no exception, providing Quattro all-wheel drive, leather upholstery, and a third-row seat as standard equipment while rivals from BMW and Mercedes require thousands more for those features. As you add equipment, though, this price advantage is less obvious.

At the same time, the Audi Q7 is more expensive than other midsize luxury SUVs, while newcomers like the Genesis GV80 offer a compelling value proposition. The BMW X5, Lincoln Aviator, and Volvo XC90 are available with plug-in hybrid drivetrains, while the Q7 is not.

Every premium and luxury brand aside from Jaguar and Porsche offers an alternative to the 2020 Audi Q7. Good thing for Audi, then, that the Q7 remains a worthy choice in the face of serious competition. With more generous interior storage space, a roomier third-row seat, and less aggravating ADAS, it would be even more compelling.