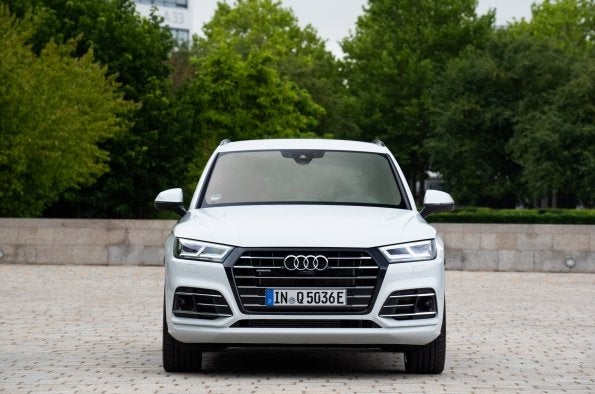 Audi’s Q5 is the best-selling vehicle in the brand’s North American lineup, so it’s logical that a hybrid version is offered for 2020. With a claimed 20 miles of all-electric range, an advertised all-electric top speed of 80 mph, and no compromise to cargo or passenger space, the Q5 PHEV looks like a practical choice among compact luxury SUVs.

Like the standard Q5, the PHEV version uses a turbocharged 2.0-liter 4-cylinder gasoline engine as its primary motive power source, but it adds an electric motor between the internal combustion engine and 7-speed dual-clutch transmission. Every Q5 hybrid has all-wheel drive (AWD) and uses Audi’s quattro with ultra technology, which seamlessly switches between front-wheel drive (FWD) and AWD, optimizing for either grip or fuel economy.

A relatively large-capacity 14.1-kWh battery resides beneath the rear cargo area. At 362 horsepower and 369 lb-ft of torque, the hybrid powertrain's output is significantly higher than that of a standard Q5. Audi claims a 0-to-60 time of 5.0 seconds for the Q5 PHEV, almost a full second quicker than it claims for the non-hybrid version. The EPA rates the Q5 PHEV at 27 mpg combined on gasoline and 65 miles-per-gallon equivalent combined on gas and electricity.

The Q5 PHEV’s most obvious competitor is the BMW X3 XDrive30e, which is also a plug-in hybrid and comes standard with AWD. BMW claims a 60 miles-per-gallon equivalent combined rating for the X3 PHEV, though its combined output (288 hp, 310 lb-ft) is substantially less than the Q5 PHEV's. Both Mercedes-Benz and Lexus also offer conventional (non plug-in) hybrid-powered compact SUVs in the GLC 350e 4Matic and RX 450h AWD, respectively. Both also have AWD.

Although it’s wildly popular, the Q5 lacks interior space relative to many of its competitors, but what it lacks in space it makes up for in technology and build quality.

Have you driven a 2020 Audi Q5 Hybrid Plug-in?
Rank This Car