The 2019 Toyota Prius is the perfect car for most people, most of the time. If only there were a compelling reason to actually want one. 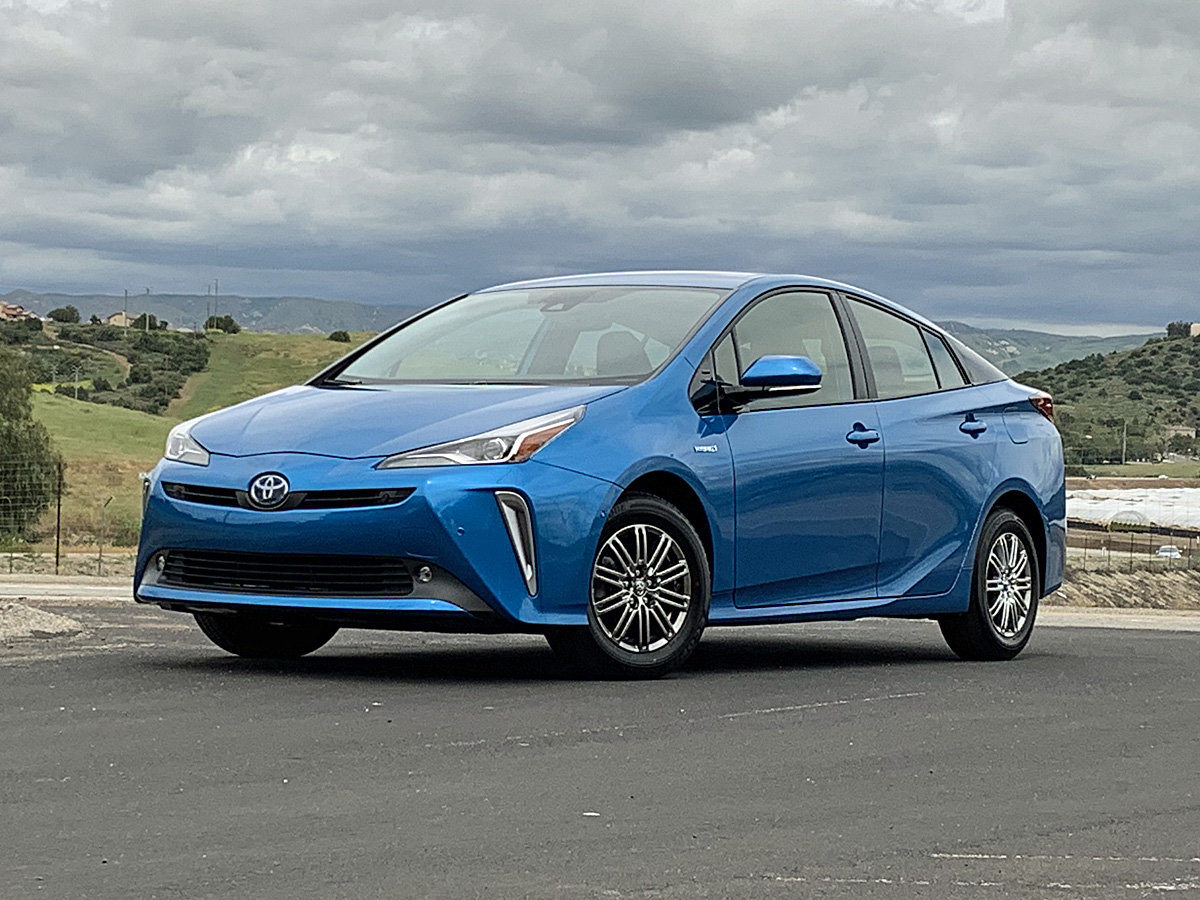 Reliable, efficient, affordable, practical, and safe, the 2019 Toyota Prius checks off multiple boxes on a typical car shopper’s list. The latest version is even decent to drive, but the Prius' styling does the car no favors. For 2019, Toyota tries to tone down the design, revises its trim-level strategy, and adds a new electric all-wheel-drive option to the car. 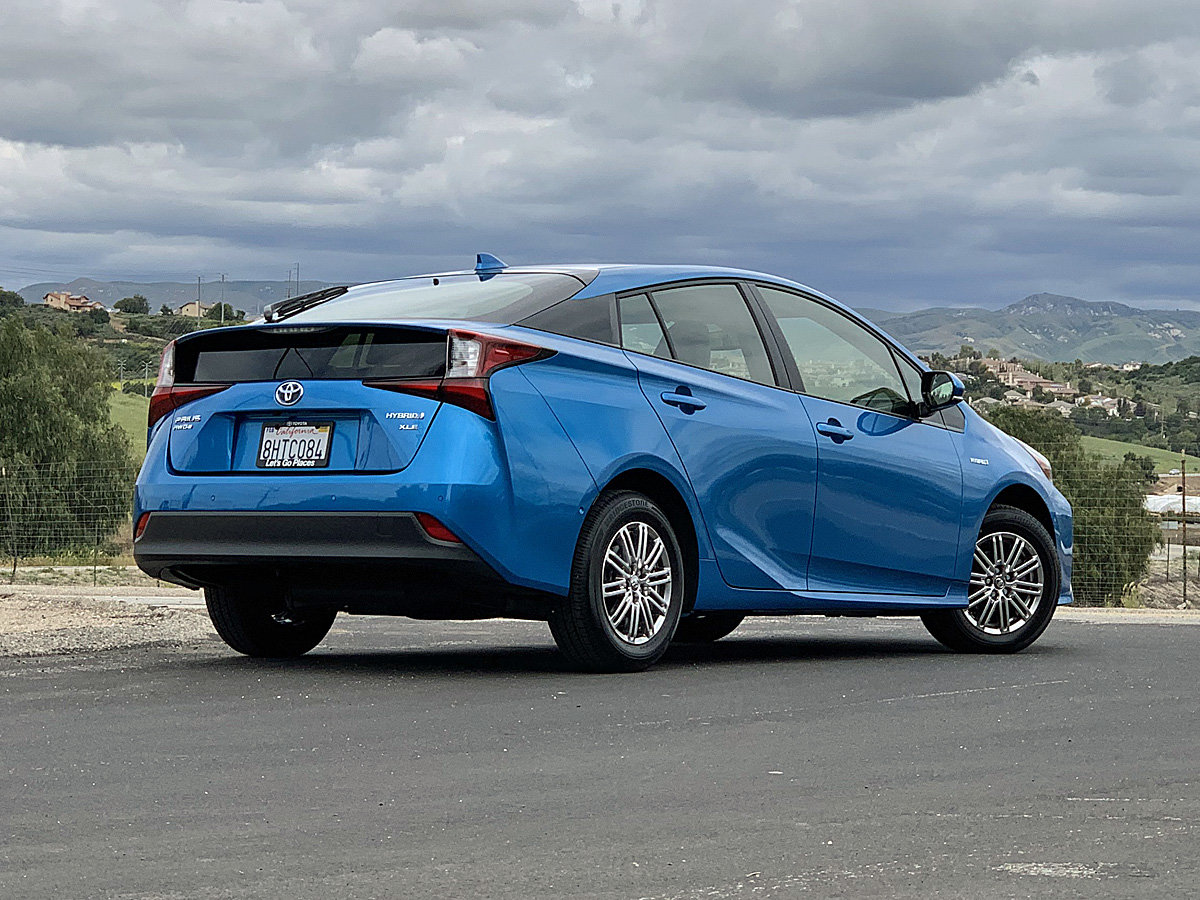 Anything is possible, but I cannot imagine that anyone has ever gazed upon a Toyota Prius and said, “Now that’s a good-looking car!”

Styling has sold them, though. When the second-generation Prius debuted for the 2004 model year, it introduced the now familiar boomerang-shaped profile and hatchback with split rear glass. Early-adopter hybrid buyers wanted a design that made a statement.

Today, however, hybrids are common. Perhaps Toyota determined that the fourth-generation Prius, introduced for 2016, had to be even more extroverted. But I contend that the design hurts sales more than it helps.

And that's a shame because the Prius offers a simple solution for shoppers looking for a daily driver.

My test car was the XLE with AWD, painted a new-for-2019 color called Electric Storm Blue. Toyota loaded it up with an Advanced Technology Package featuring a head-up display, a set of aluminum wheels, floor mats, a cargo mat, illuminated door-sill plates, and rear-bumper protection. These upgrades brought the price to $32,146.

Like the exterior, the interior looks unusual. All controls are centralized, from the digital instrumentation strip running beneath the windshield to the center-console stack housing the infotainment system, climate controls, and the transmission's joystick-style gear selector.

Here, the offbeat approach to design is less problematic. Functionally, it works well, although it takes some time to acclimate to the transmission controls. Toyota has added lots of gloss black interior trim to the Prius for 2019, and it serves as a dust magnet. So if you’re the fastidious type, consider yourself warned. 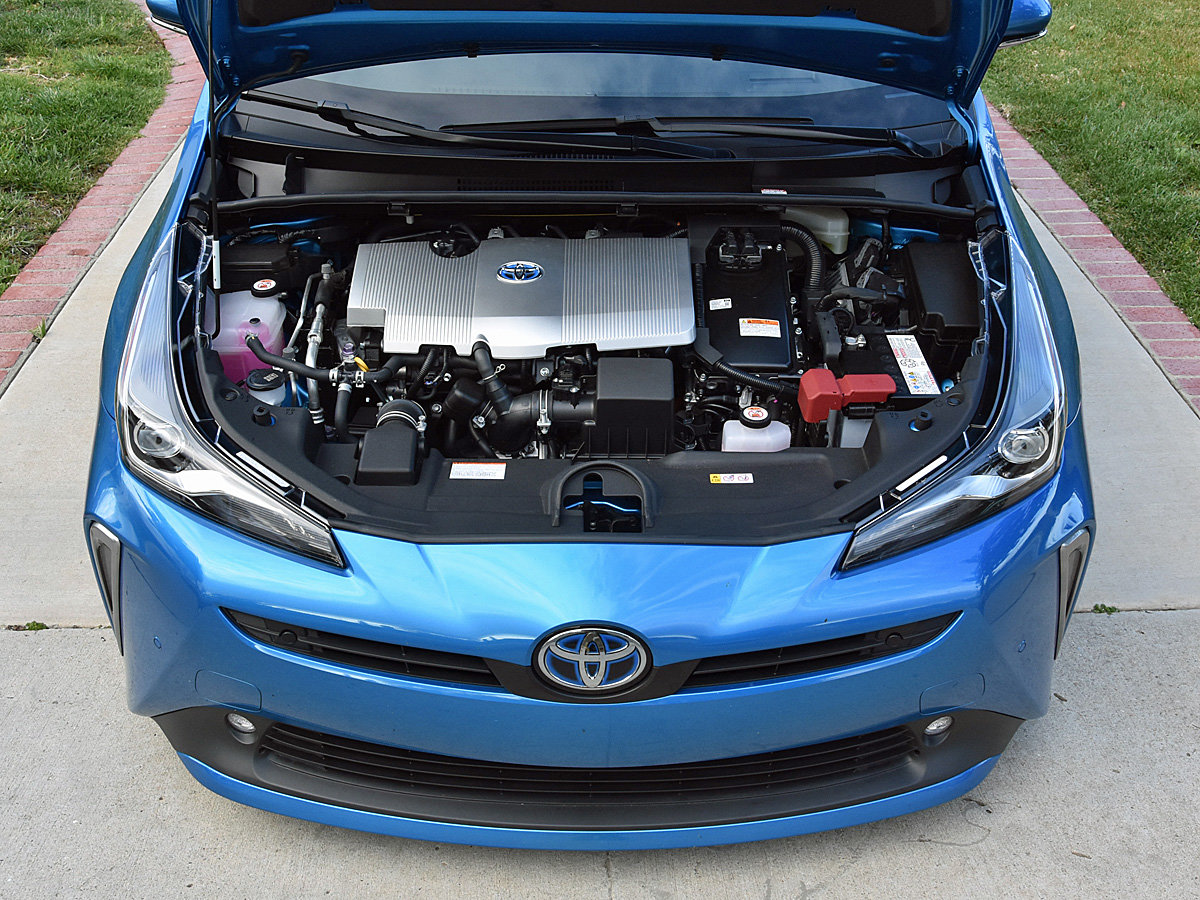 A 1.8-liter 4-cylinder gasoline engine pairs with an electric motor to create a combined 121 horsepower. If you get the optional electric AWD system, Toyota adds a 5-kilowatt rear electric motor and swaps out the standard lithium-ion battery for a nickel-metal hydride battery.

The rear electric motor powers the rear wheels from a stop up to 6 miles per hour, and then adds extra traction when necessary at speeds up to 43 mph. Beyond that velocity, the Prius AWD-e operates as a front-wheel-drive (FWD) vehicle just like a standard Prius.

AWD-e results in lower gas mileage. A standard front-drive Prius gets 52 mpg in combined driving (56 mpg in L Eco trim), according to the EPA. A Prius AWD-e gets 50 mpg, and I averaged 48.6 mpg on my testing loop.

Given the extra cost, reduced fuel economy, and a reduction in maximum cargo space, I’d say AWD-e isn’t a cost-effective option when you can get a full set of snow tires for a Prius for as little as $320, plus mounting and balancing.

A continuously variable transmission (CVT) handles power sent to the front wheels (remember, the rear wheels run off a separate electric motor). The transmission controls are located on the dashboard and are comprised of a button for choosing Park and a joystick for all other transmission functions. You get used to this setup over time, but you don’t get used to how the car rolls a little bit after choosing Park and letting your foot off of the brake pedal.

Toyota builds the Prius on its new global architecture. In fact, the redesigned 2016 Prius was the first Toyota to use the platform, which was engineered, in part, to provide enjoyable driving dynamics. Believe it or not, this quality shines through in the Prius, which offers a good ride and decent handling.

Switch from Eco or Normal driving mode to Power mode, and the instant torque from the electric motors gets the Prius going with gusto. Driving up hills, the CVT creates a characteristic drone. Otherwise, you don’t notice the transmission at all.

At speeds under 25 mph (and with a light foot on the accelerator pedal), the Prius offers an EV driving mode using nothing but the electricity stored in the battery pack. Blended regenerative brakes recharge the battery, and the transmission has a Braking mode that intensifies energy recuperation while coasting.

While this sounds complex, in reality, the hardest thing about driving a Prius is using the transmission controls and getting used to the interior layout. Otherwise, unless you actively decide to try to maximize your fuel economy, you don’t need to worry about it whatsoever. Just get in and drive.

Thanks to its aerodynamic bodywork and modest P195/65R15 Bridgestone Ecopia all-season tires, the Prius is quiet in urban and suburban environments—especially when running in EV mode. On the freeway, road noise is more prominent, and I could hear a low-pitched whine coming from the rear end of the vehicle, though I cannot confirm that this had anything to do with the AWD-e system.

Used as a daily driver, the Prius is a no-hassle kind of a car. Get in, go, and don’t stop for gas for a really long time.

If you’re inspired to take the scenic route, the Prius is no longer a drag to drive. From the blended regenerative brakes and well-weighted steering to the suspension’s balance of ride compliance and body control, this miserly Toyota is actually pleasant to pilot on a twisty road. In fact, with the 17-inch wheels that come standard on the FWD XLE and Limited trim levels, some more aggressive rubber, and perhaps a few suspension tweaks, I’d bet the Prius could be downright fun. 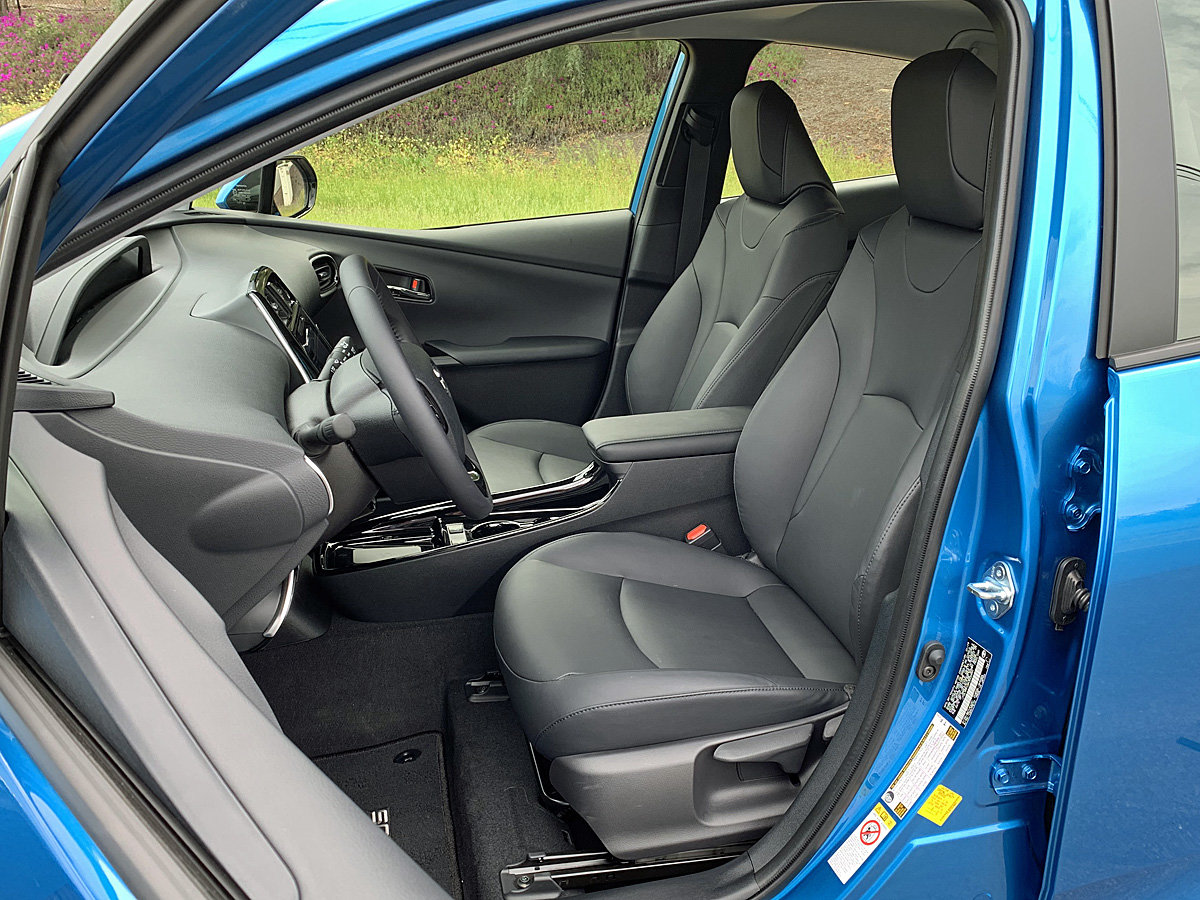 With comfortable seating for four adults, the Prius is roomier inside than many people expect.

In my test vehicle, the driver’s seat offers manual height adjustment, while the front passenger’s seat does not. You likely won't find the omission for the passenger to be a big deal, though, because that seat sits high off the floor. Both front seats were heated, as was the steering wheel.

Rear passengers enjoy a tall cushion with good thigh support and decent space for legs and feet. Unfortunately, air conditioning vents are missing in the second row, though my test vehicle had dual 2.1-amp USB chargers for people sitting back there.

On hot, muggy days, a Prius XLE or Limited is no fun at all. Both of these trims include standard SofTex leatherette upholstery, and speaking from experience, this material tends to trap sweat. Couple this with the popular Black interior color, the lack of darkly tinted privacy glass, and the lack of a front-seat ventilation option, and during the summer a Prius can turn into a sauna.

Because it is a 5-door hatchback, the trunk is quite commodious, offering up to 27.4 cubic feet of luggage space behind the rear seat (24.2 in the LE, XLE and Limited). Fold the seat down, and the car supplies as much as 65.5 cubic feet (or 62.7 with AWD-e). These figures are comparable to those of many small crossover SUVs, and given the Prius’s new AWD-e technology, Toyota is clearly pitching this car as an alternative.

I’ll buy that, assuming you never plan to tackle anything more challenging than the dirt parking lot at the trailhead. Otherwise, you’re going to want extra ground clearance for blizzards and off-pavement exploring. 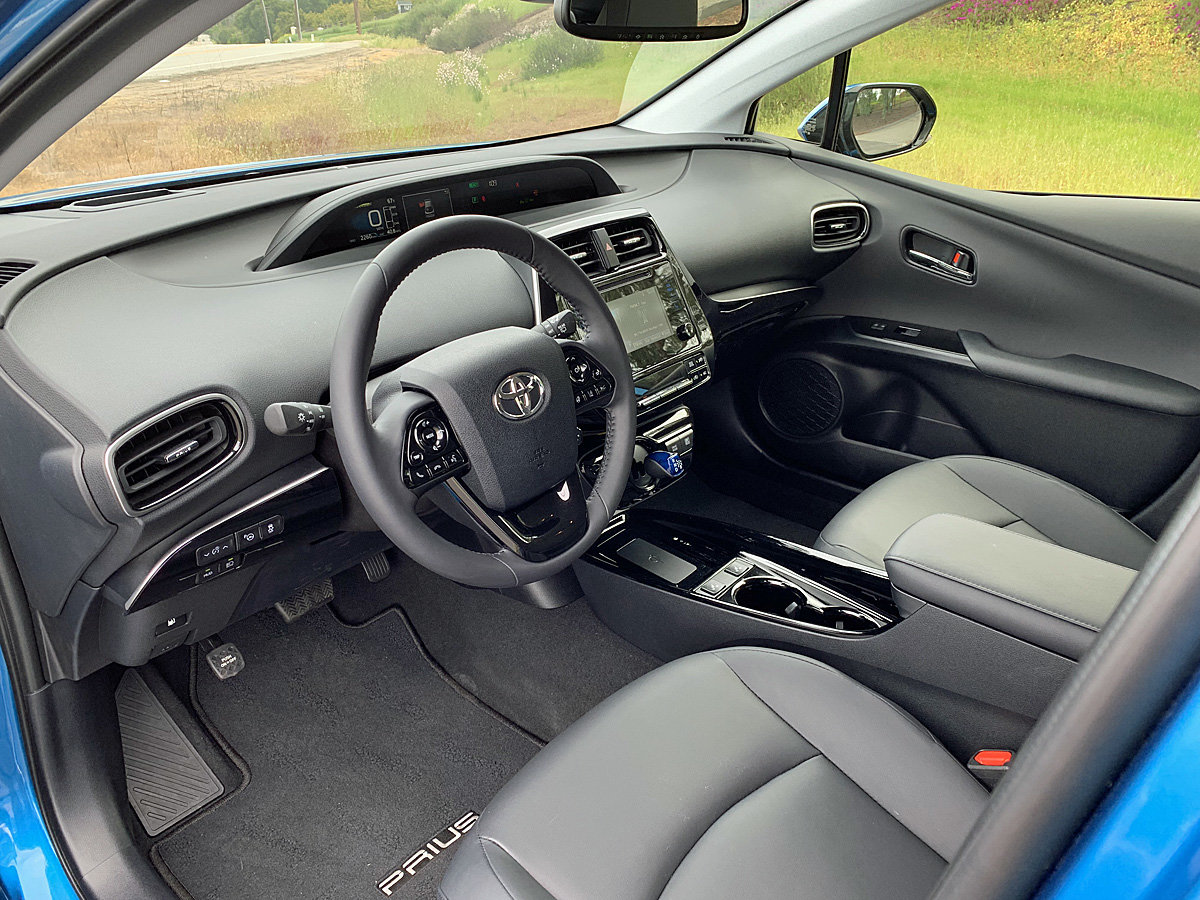 My XLE AWD-e test car did not have this system. It had the standard infotainment setup, which includes a tiny 6.1-inch touchscreen, Bluetooth, and a CD player. It sits behind a flush glass surface with stubby volume and tuning knobs, and blends seamlessly into the black interior trim, looking far more sophisticated than it is. The test car did have wireless smartphone charging, though, which came in handy.

Toyota houses the Prius' instrumentation in a horizontal strip running just below the base of the windshield. Some of the various displays look modern; others look like they’re from the MS-DOS era. My test car also had the Advanced Technology Package, which over-promises and under-delivers. It amounts to a simple head-up display, adaptive headlights, and a Hybrid System Indicator.

Technologically speaking, the Prius underwhelms. And neither of the infotainment systems includes Apple CarPlay or Android Auto, though Toyota is slowly rolling these convenient smartphone-integration platforms out to its other models. I sure did enjoy revisiting my old CD collection, though. 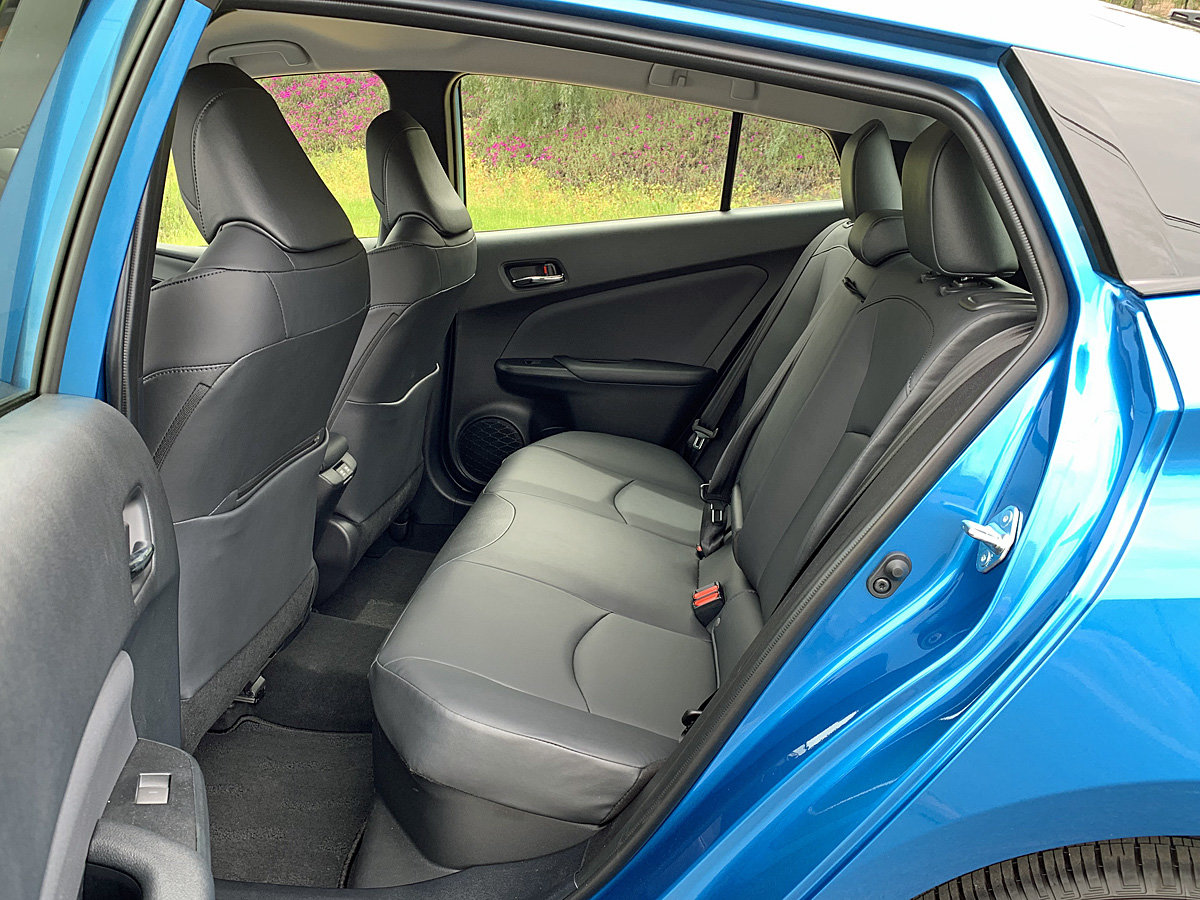 Upgrade to LE trim, and the Prius adds a blind-spot-monitoring system, rear cross-traffic alert, and an Intelligent Clearance Sonar system comprised of front and rear sensors, coupled with a parking-assist function.

The adaptive cruise control and lane-keeping assist systems work in a fairly unobtrusive manner, and fortunately, I did not require the forward-collision warning or the automatic emergency braking systems. The automatic high-beam headlights proved effective, and both the rear cross-traffic alert and the parking sensors were useful. The Prius is fairly easy to see out of, and parallel parking was no problem, so I didn’t use the semi-automated parking assist technology.

In federal government crash tests, the Prius gets a 5-star rating, even though front passenger protection in a frontal-impact crash measures 4 stars. The Insurance Institute for Highway Safety gives the Prius a Top Safety Pick rating, with small overlap front passenger frontal impact protection rated as Acceptable instead of Good. 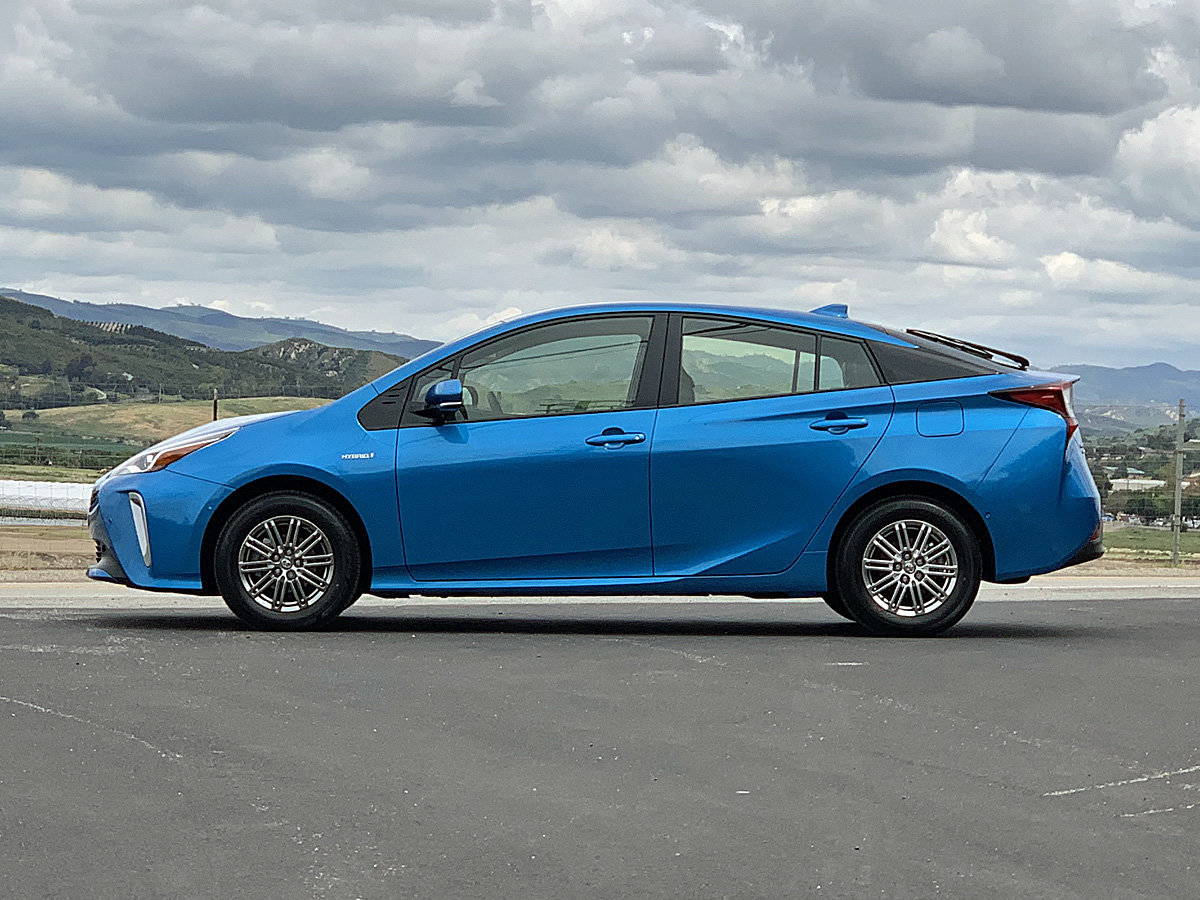 Given that the average new car sold in America costs about $35,000, the Toyota Prius is a cost-effective solution to your transportation needs.

Loaded with every option, it stays below that average price. It gets terrific gas mileage, and historically has proven reliable and trouble-free. Add the roomy interior, hatchback utility, good crash-test ratings, and standard driver-assistance and collision-avoidance systems, and Prius ownership makes logical and financial sense. Buying one is just plain smart.

Unfortunately, this isn’t compelling enough for most consumers. While it’s never true that you are what you drive, most people want to feel good about their choice in a vehicle, and polarizing design is rarely the path toward widespread success.

There is good news for people who like the idea of a Toyota Prius but can’t see themselves owning one. The redesigned 2020 Toyota Corolla comes in a new Hybrid model, and it’s essentially just like a Prius—but with a Corolla sedan’s styling and more conventional interior.

Whether you think that’s a good alternative or not is entirely up to you.

Guru9W7V9L I love the styling. It's a beautiful car that saves you money.

Have you driven a 2019 Toyota Prius?
Rank This Car

Are Any Of Your Cars Certified Pre Owned?

I am interested in a certified preowned hybrid crossover.

My prius has been getting around 50 mpg and now only gets about 33. Any suggestions? I haven't changed anything I can think of.

Can My Company Purchase A Car Through ACH Transfer

How Can I Find Cars To Lease?

Looking to lease a prius