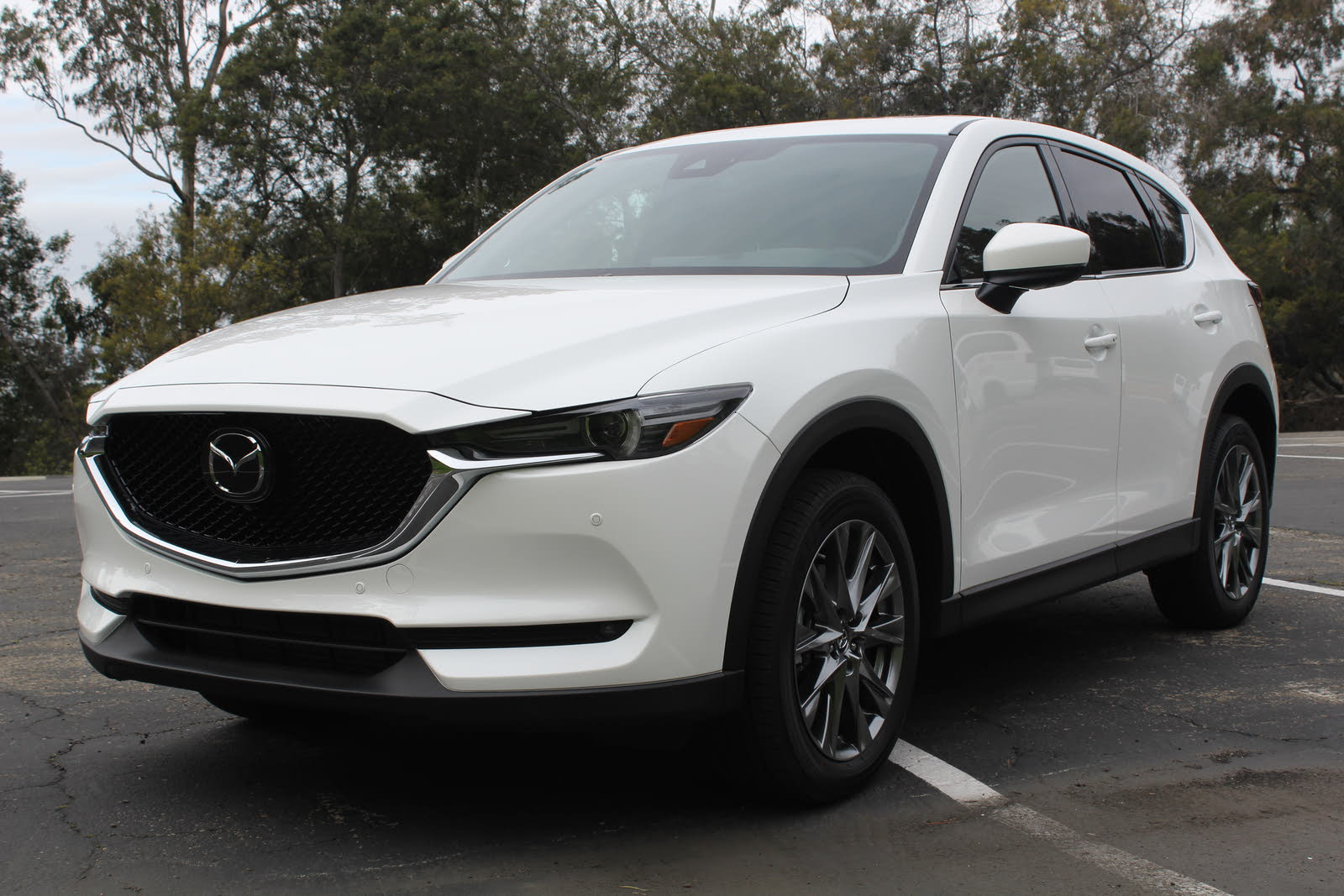 In a segment dominated by some pretty intimidating competitors like the Toyota RAV4, the Honda CR-V, and the Subaru Forester, the Mazda CX-5 has been slowly winning over consumers year after year with good looks and a best-in-class driving experience. But rather than resting on its laurels, Mazda has updated the CX-5 just one year into its second generation, improving handling with an updated version of its G-Vectoring Control system, increasing connectivity with Android Auto and Apple CarPlay, and boosting power with a turbocharged engine for two new top-tier trims—the Grand Touring Reserve and Signature. 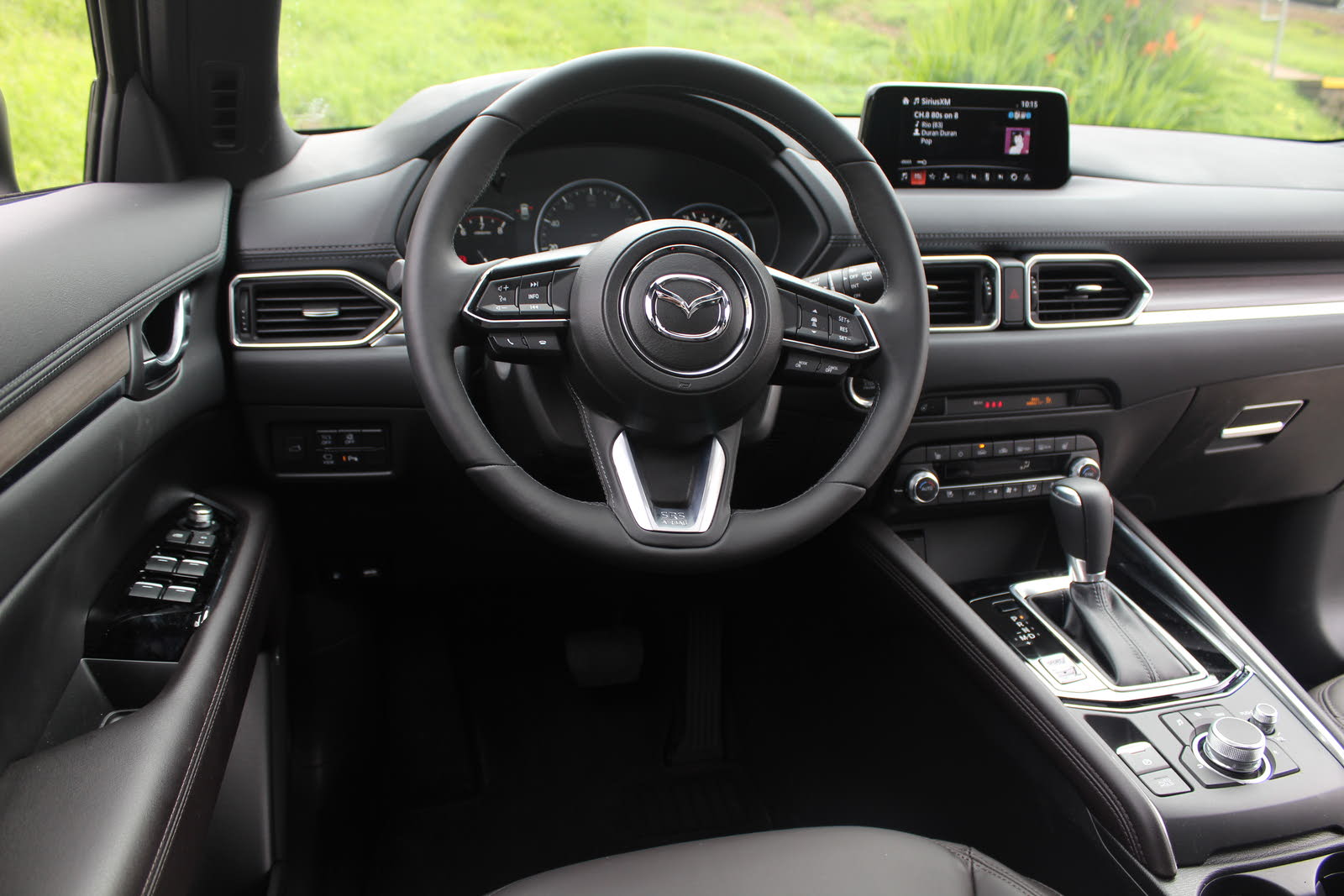 Mazda's CX-5 is the best-looking, best-driving midsize crossover on the market. Full stop. To date, the big complaint with the CX-5 has been its relative lack of power and the omission of Android Auto and Apple CarPlay. Both issues have been fixed for 2019, even if the lack of power is addressed in only the two new top-tier trims. But while most reviews of the 2019 CX-5 will concentrate on those new trims, you should not ignore the rest of the lineup. The base Sport trim starts at $24,350 and delivers unexpected features like LED headlights, a push-button ignition, a 7-inch touchscreen, and an impressive safety suite including low-speed forward collision warning with automatic emergency braking; blind-spot monitoring with rear cross-traffic alert; automatic headlights, wipers, and high beams; lane-departure warning and assist; and adaptive cruise control.

Move up to the Touring trim at $26,615, and Mazda adds keyless entry, a power driver's seat, dual-zone automatic climate control, rear climate vents, heated front seats, two more USB ports, and an upgraded stereo. The Grand Touring gets you adaptive headlights and LED fog lights, leather upholstery, an upgraded driver display, and navigation for $30,045. Add all-wheel drive (AWD) to any of these and you’ll tack another $1,400 onto the price. Every one of these trims comes with the old 2.5-liter naturally aspirated 4-cylinder engine paired with a 6-speed automatic for 187 horsepower and 186 pound-feet of torque. But if you go for the Grand Touring Reserve (and its $34,870 MSRP), you’ll also get Mazda's more powerful, turbocharged 4-cylinder engine, a head-up display, power-folding mirrors, heated and ventilated front seats (and heated rear seats), a heated steering wheel, and a windshield wiper de-icer.

But my week with the CX-5 was spent in the top-tier Signature trim, which starts at $36,890. For that price, you get some added luxury in the form of ambient cabin lighting, upgraded leather upholstery, real wood trim, a 360-degree camera, and parking sensors front and rear. For options, I had a $70 cargo mat, $400 illuminated door sill plates, a $200 paint job in White Pearl, a $125 rear bumper guard, and a $250 retractable cargo cover that honestly should just be standard equipment. With a $995 destination fee, the final price came to $38,930. 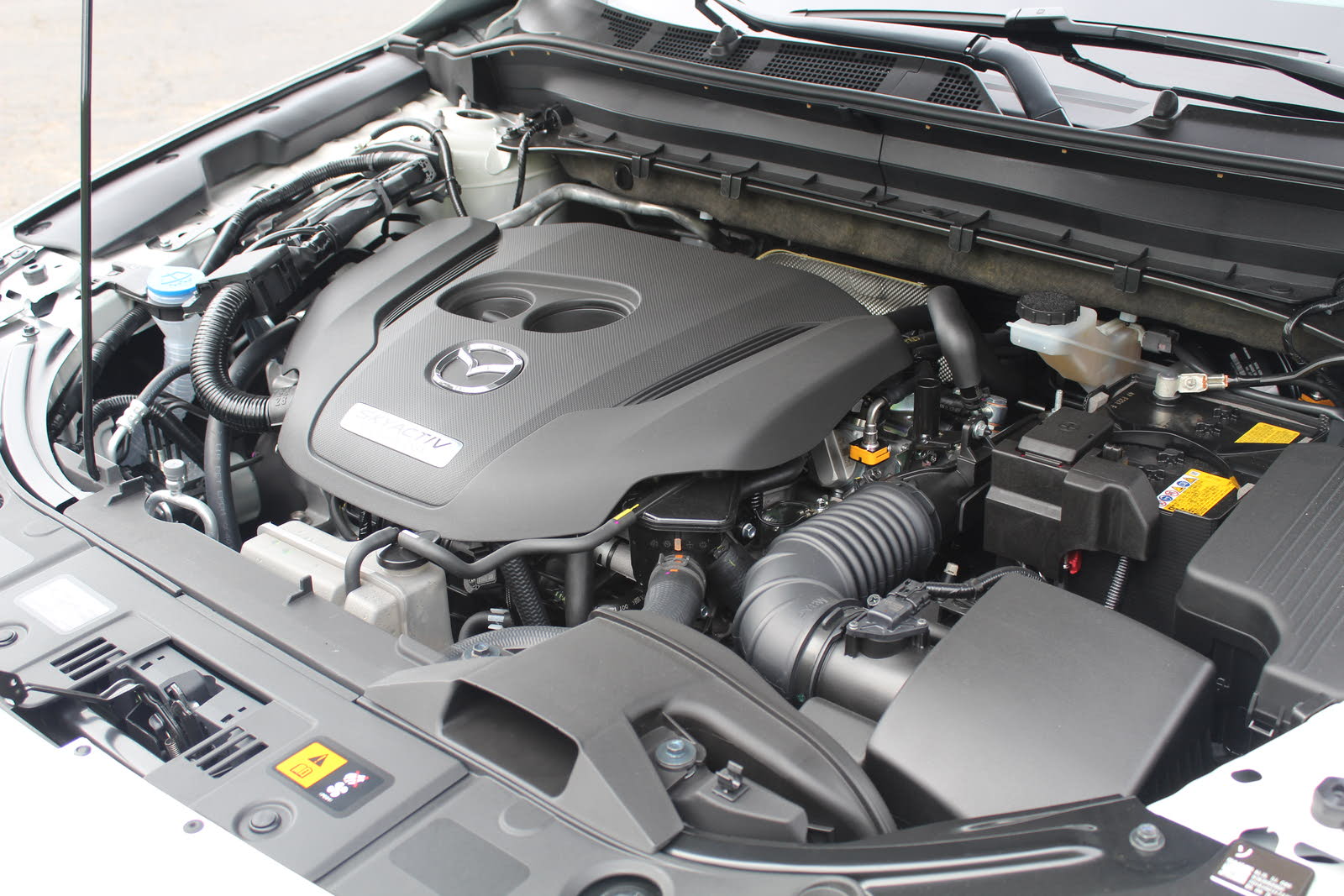 While 187 hp and 186 lb-ft of torque were seriously impressive numbers to see from a naturally aspirated 4-cylinder engine just a few years ago, today they're considered rather lackluster, especially in a crossover. This was the CX-5's major drawback up to this point, so the fact that Mazda has addressed it this year is definitely cause for celebration. My only complaint is that you have to spring for one of the two most expensive trims in order to get the more powerful engine.

The 6-speed automatic transmission hides no surprises. Its EPA-estimated 25 miles per gallon city, 31 highway, and 28 combined is absolutely attainable. As long as you’re not hauling or looking to win races to the grocery store, this base engine will do just fine. Just don’t expect to be surprised. However, if you want more power…

The new Grand Touring Reserve and Signature trims employ a turbocharged version of the same engine that’s already seen duty in the larger CX-9 and the excellent Mazda6 sedan. With a potential 250 hp and, more importantly, 310 lb-ft of torque, you’ll have plenty of power on tap. Put in anything less than 93-octane gas, however, and that horsepower figure will drop to 227 (which is still quite stout). Shifts are quick and confident, with none of the low-speed stutters that can make stop-and-go driving even more maddening than it needs to be. EPA estimates put this setup at 22 mpg city and 27 highway, for 24 combined, which I was easily able to attain despite taking full advantage of all that power. My one complaint is that this engine doesn’t sound very nice, either at idle or during hard acceleration. That said, a pleasant-sounding 4-cylinder engine has become about as rare as a manual transmission of late, so this is more a general complaint about the industry than a specific Mazda gripe.

Handling has improved this year with the implementation of Mazda’s G-Vectoring Control system, appropriately named G-Vectoring Control Plus. The old system would shift the car’s weight forward when you initiated a turn for more grip up front—check out my video on the 2018 CX-3 for more detail on that—but the new system aims to improve handling when you exit a turn by applying a small amount of braking to the outside wheels, giving you a smoother return to your driving line. And just in case you think Mazda is getting lazy, it also retuned the suspension for better bump absorption and improved steering feel, too. 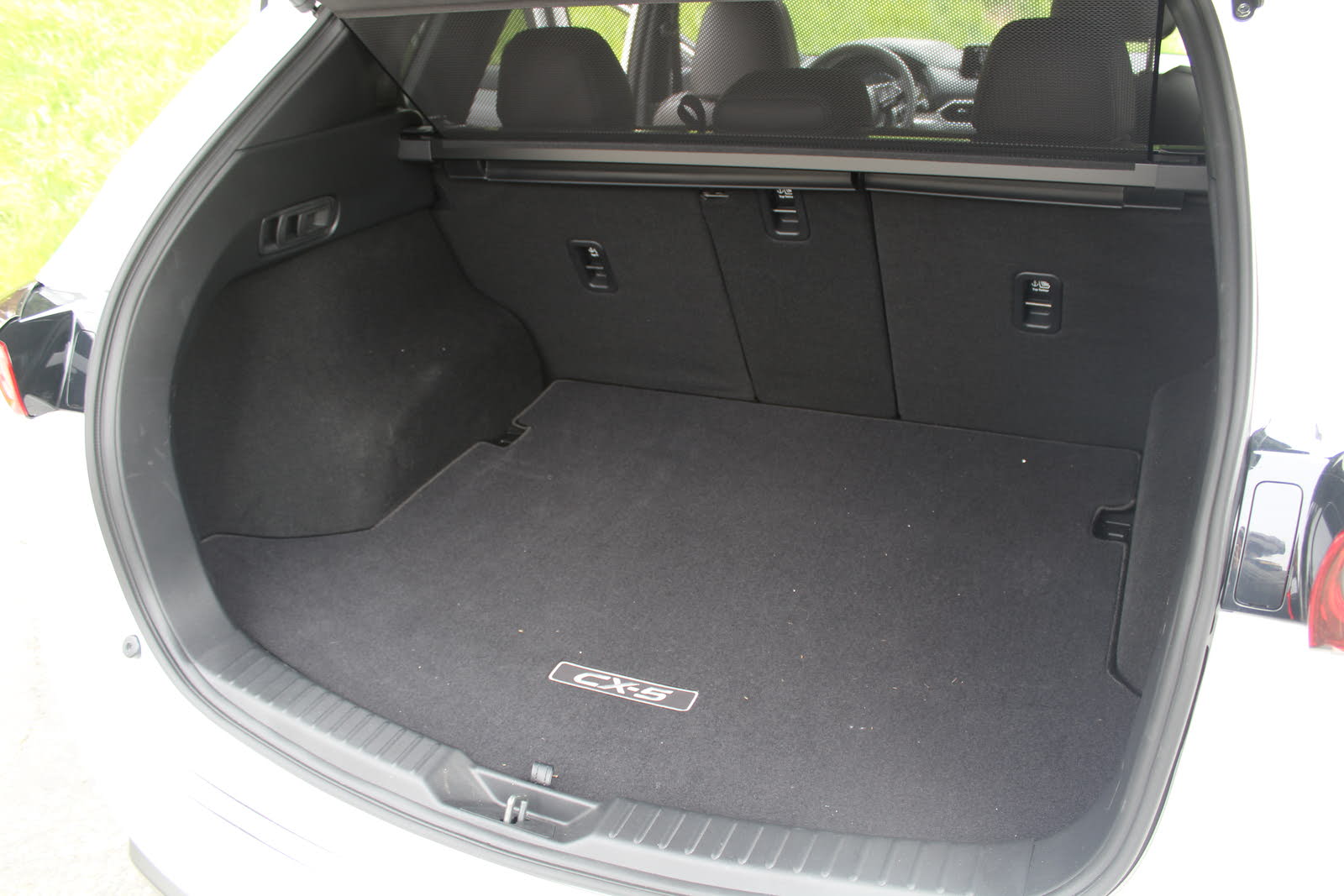 The CX-5 accomplishes every goal it aims to achieve, with captivating looks, spirited performance, and useful space. Cargo capacity does fall behind some rivals, with 30.9 cubic feet behind the rear seats, as opposed to the impressive 39.2 in the CR-V, but that’s still a healthy amount of room for almost anything you'll want to carry with you. And while passenger legroom is more than adequate in both the front and back (even for bigger adults), I found the front seats a little too narrow, so make sure to check that they fit your particular body type.

If all you care about is a great vehicle at a great price, the lower trims deliver in spades, and if you want a bit of luxury, the Grand Touring Reserve and Signature offer amenities that you’d expect to find in a car costing thousands of dollars more. From the ambient lighting to the real wood to the frameless rear-view mirror, the Mazda CX-5 Signature delivers a level of design and refinement I’d expect to find in the $40-50,000 range. Competitors should pay attention. 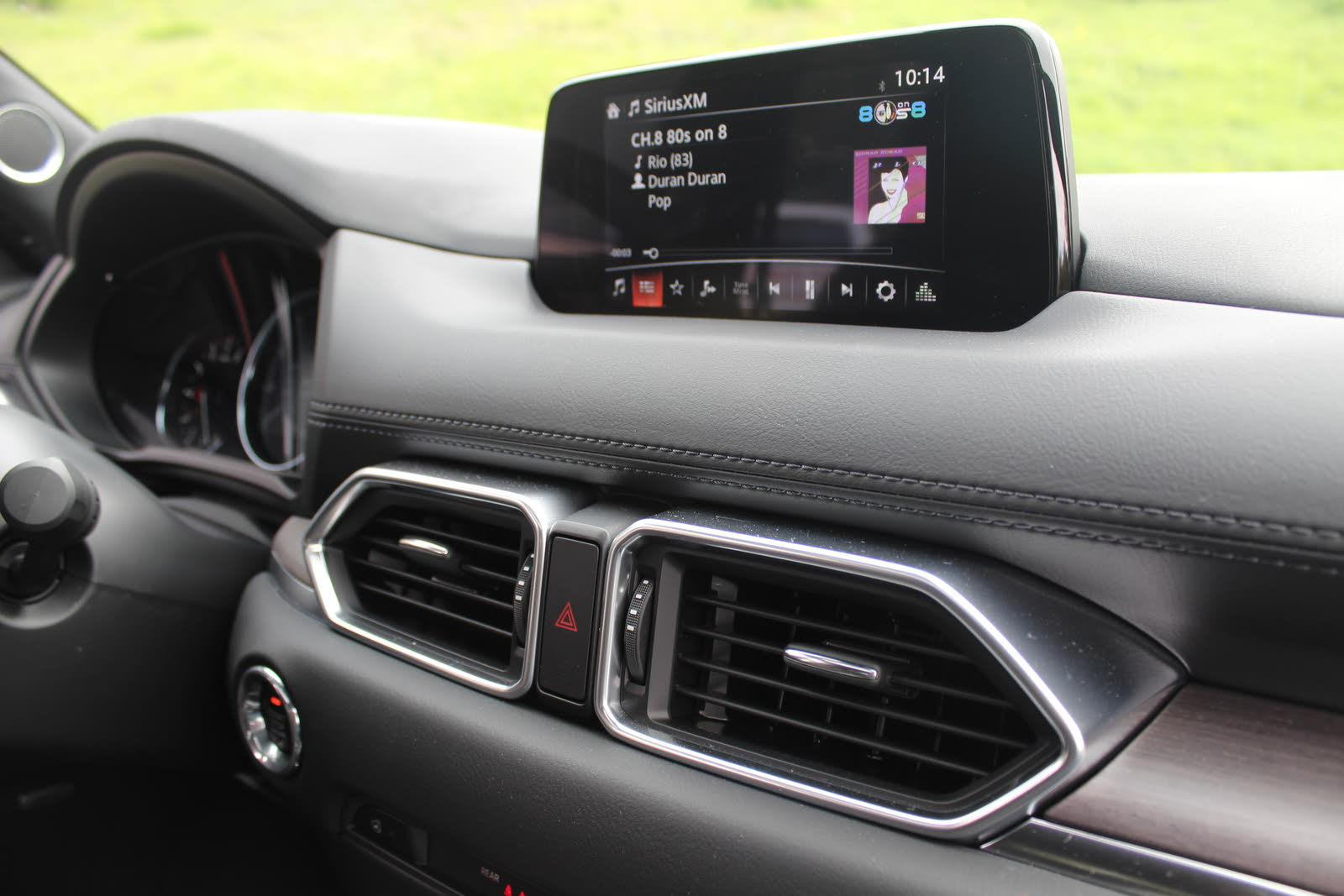 With Android Auto and Apple CarPlay now standard on everything above the base Sport trim, the CX-5's other major drawback has been addressed. The MazdaConnect infotainment system is attractive and responsive, though shoppers might not like the scroll-wheel interface. The 360-degree camera is a welcome addition, but its resolution should definitely be improved. Especially with the level of refinement the rest of the vehicle exhibits, this stands out as an eyesore. 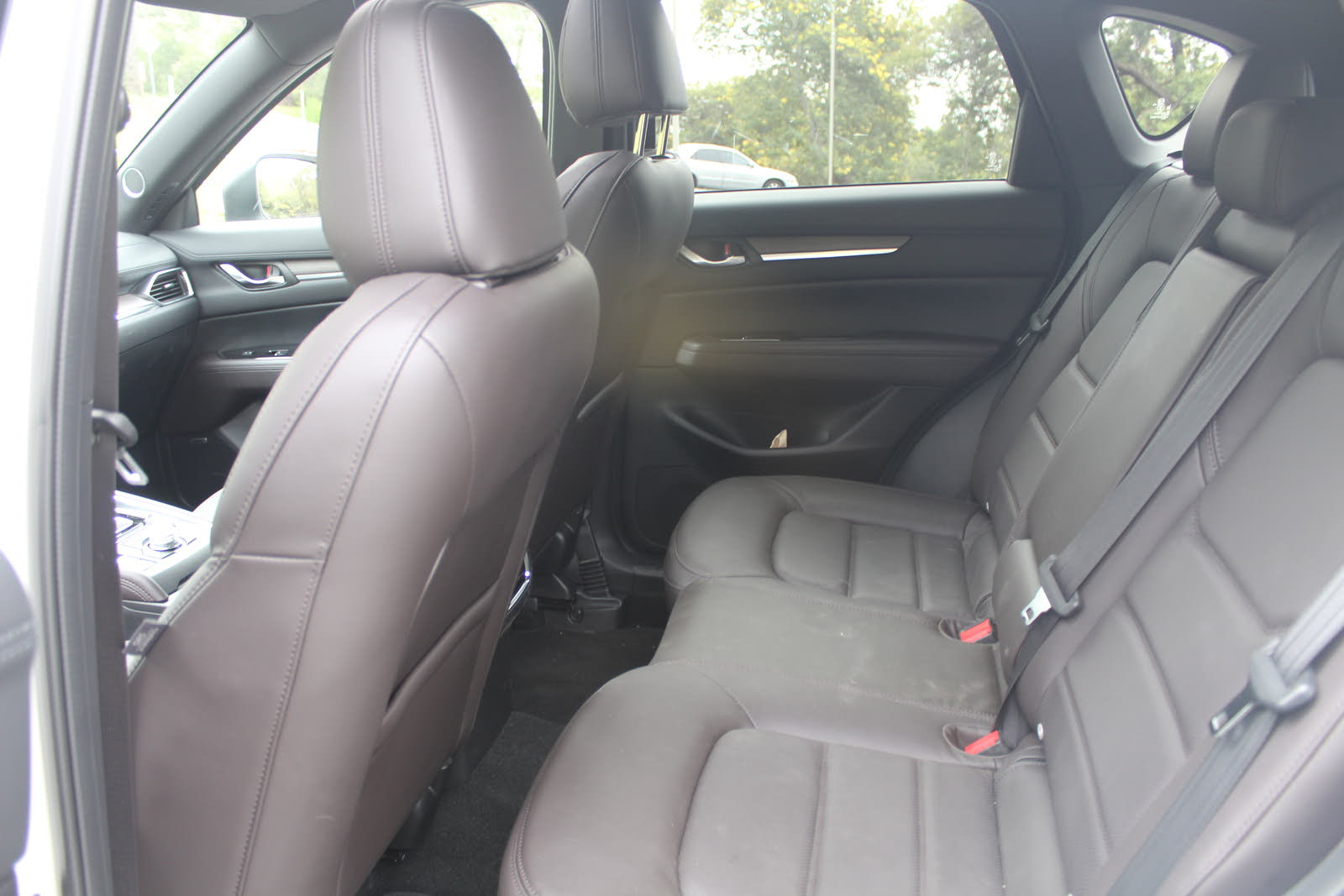 Previously, Mazda's i-ActiveSense safety suite could be added to the base Sport trim for automatic headlights, wipers, and high beams; lane-departure warning and assist; adaptive cruise control; and a forward-collision warning and mitigation system. But this year, all of that becomes standard across the range, with only more advanced features like the 360-degree camera and parking sensors saved for the top-tier Signature trim. Again, competitors should take note.

A 5-star rating in nearly every category from the government’s National Highway Traffic Safety Administration (NHTSA) is blemished solely by a 4-star rating in the rollover category, a weak point for many crossovers. A similar story is told by the independent Insurance Institute for Highway Safety (IIHS), which awarded the CX-5 top marks in every category except the child safety anchors' ease of use, which earned the second-highest rating of Acceptable. 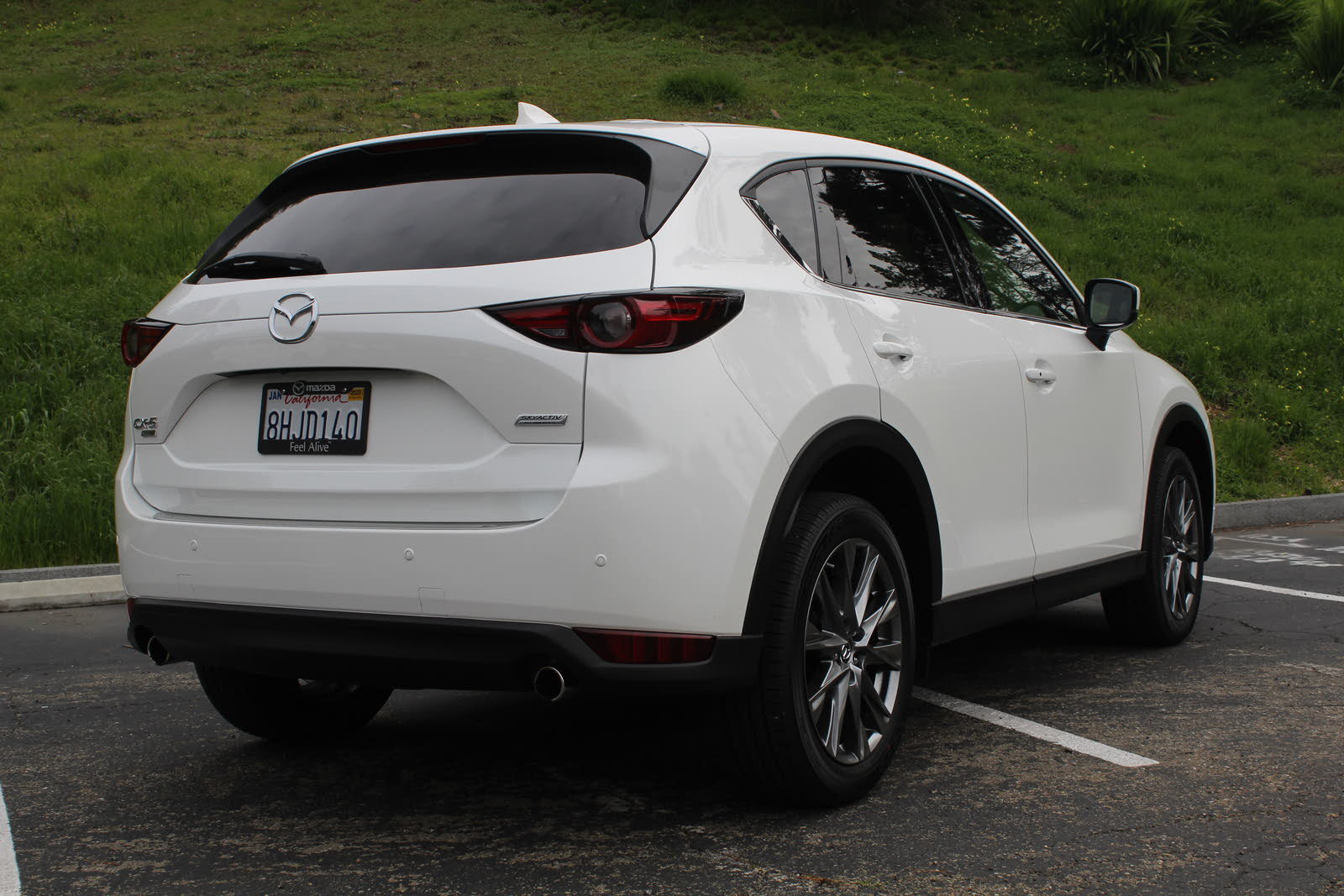 It’s rare that I can, or am willing, to say this: Even with the most expensive trim—the Signature—the CX-5 offers a tremendous deal with regard to cost-effectiveness. I’d stay away from the Sport solely because of its lack of Android Auto and Apple CarPlay, but otherwise, it’s hard to go wrong here. If I could make one change, it would be to make the turbocharged engine available across the range, but even if you spring for the Grand Touring Reserve or the Signature, you’re getting a lot of car for the money. The fact that it’s also such a great-looking and fine-handling vehicle sweetens the deal further. If you’re looking for a midsize crossover, the 2019 Mazda CX-5 needs to be on your shopping list.

GuruB16XM Why not FWD for signature and GTR? Buying is a no brainer with FWD.

Chelcal2 I have always had a Honda and loved them until I just a couple months ago bought my first Mazda and I got the 2019 CX-5 GTR and loved it until about a month into it my navigation system started acting crazy and not navigating correctly anymore and have had it in the shop at Mazda 2 different times and they have replaced the card, the display screen, and the Navigation antenna and as soon as I pull away from the lot it does the same thing. I even tried turning my cell phone (bluetooth) off thinking it may be interfering or something and it still messes up. Now it even resets the display screen...(displays Mazda) when no one is messing with it and then goes back to the navigation screen when I had it on the sirius XM before it rebooted. Any thoughts or helpful tips. I have an appointment to take it back to Mazda for a third time.

RonBeck123 I had same issues. Had to get a new Infotai9nment System and have it Updated. Still cannot get SiriusXM Traffic Plus to work?

Users ranked 2019 Mazda CX-5 against other cars which they drove/owned. Each ranking was based on 9 categories. Here is the summary of top rankings.

The issue relates to the navigation curser on the screen going off course, like it's 200' north of the road sometimes. It then picks up the side street and informs me that a route recalibration was ...

Parked on a hill I was dropping off my friends and I put the gear in park with the engine running and helped them get their gear out of the trunk. I then leaned into the car which was still in pa...

high speed wooble feels like it is going to roll

When playing music often automatically the volume has a maps icon and plays very softly through only the front passengers speaker. Then i have to unplug my iphone a few times and turn my car off to ...