Looking for a Used Levante in your area?

Quite simply, the Maserati Levante is the Ferrari of SUVs. 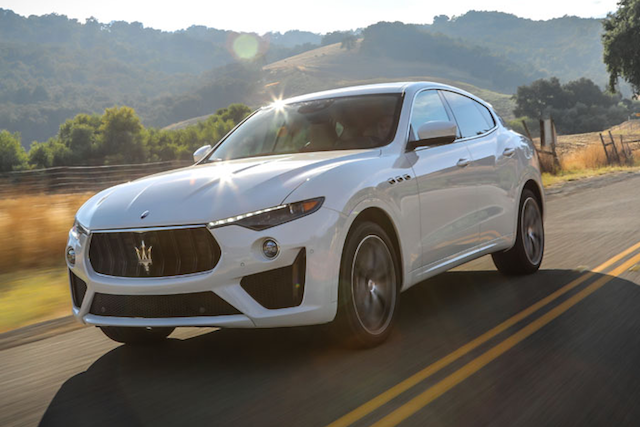 When the Maserati brothers opened shop in Bologna during the months before World War I, they conceived a racing team that would ship out beautiful, hot-blooded sports cars—and then see them return with trophies. A century later, the Maserati family name embraces the Levante, a vehicle the original brothers would have deemed too tall, heavy, and philosophically wrong to produce.

Introduced for 2017, the Levante is the Italian manufacturer's first crossover, and it's the very first Maserati I have driven after a decade of driving everything under the sun. Being a tall and heavy SUV, I was unprepared to like it. But I did. It is an imperfect—but not improper—Maserati. Understand, it also makes for a most irrational choice, competing against other $100,000 luxury performance SUVs from Porsche, BMW M, Mercedes-AMG, Range Rover, and Alfa Romeo. It's the Levante's unique character, style, and special trimmings that might move you to buy this Maserati. 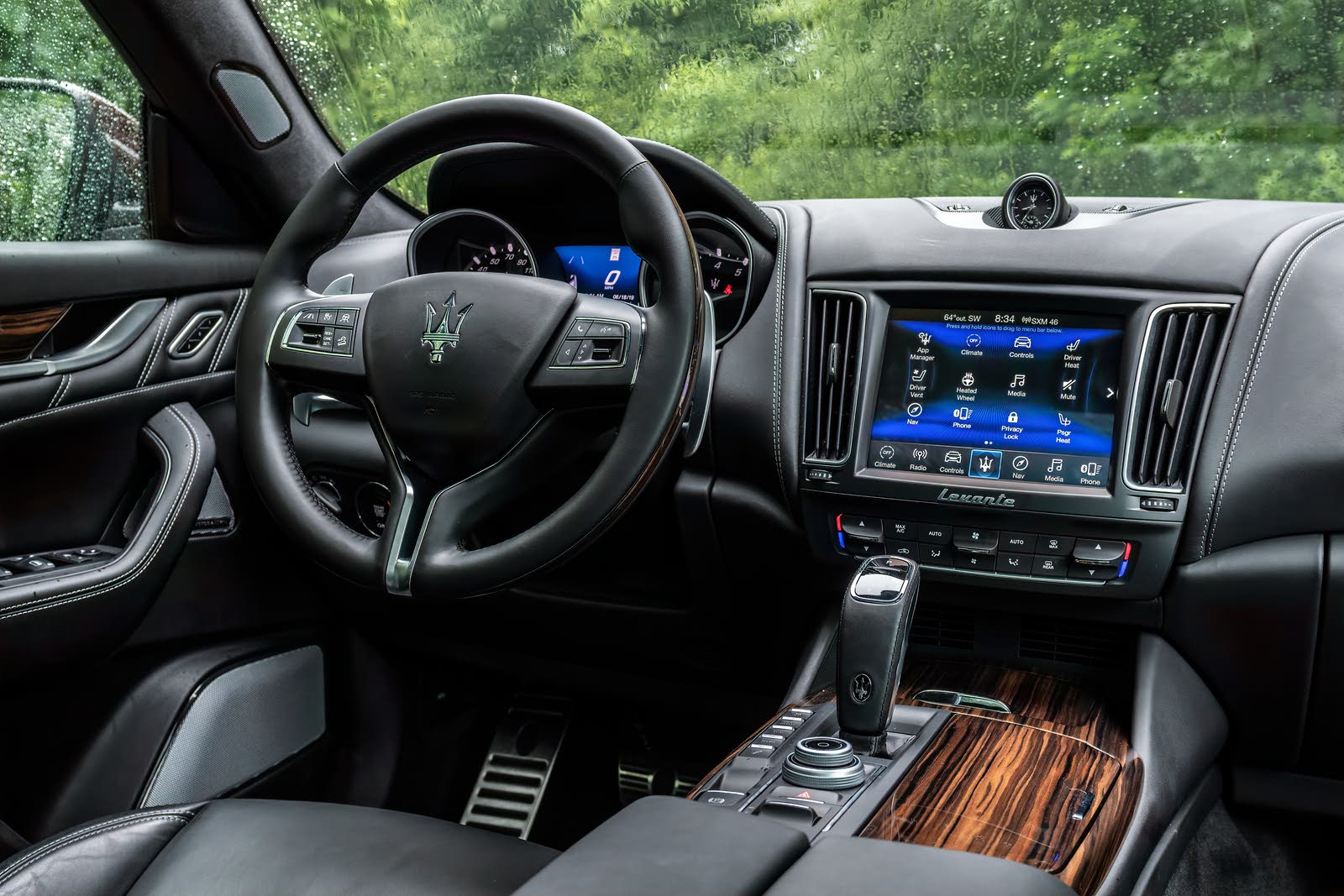 Its demerits are few. From behind or the side, it's possible to mistake the Maserati Levante for an older INFINITI QX50. The infotainment screens are plucked from Jeeps, and the switchgear for the windows, headlights, push-button start, and windshield wipers has been borrowed from other Fiat Chrysler Automobiles (FCA) brands. Some of these parts derive from Mercedes-Benz during the DaimlerChrysler era, so they feel good, but it should be less obvious that a $100,000 car borrows parts from a lowly Dodge Dart. Still, this sort of parts sharing happens; the $500,000 Ford GT uses the same headlight switch as a 2014 Ford Focus. Earlier Ferrari models used head units from Grand Caravans.

So, are you here to examine window switches or the windows themselves? They're frameless at all four doors, lending a coupe demeanor to the Levante's rising haunches and wide stance. Maserati doesn't call the Levante a coupe, but it looks entirely the part. It features rear quarters that block most of your vision, a graceful sloping roofline, a tiny back window, and a short tail with four exhaust pipes. The Levante also features a five-way air suspension, which lowers when the car is parked, making it look more like Maserati's true sports car, the GranTurismo. And my car's optional 21-inch wheels (absolute must-haves despite their $4,000 price) give it an intense stance. If you still can't recognize this Trident-badged truck as a Maserati, just take a final look at the angry front end. The concave grille is entirely open save for eight thin chrome slats. The way it blends with the slanted LED headlight housings, curves downward toward the silver-painted chin spoiler, and fits perfectly flush with the sloping, straked hood makes the Levante look like it's flexing. Constantly.

Inside, the sophistication and beauty are less noticeable on my GranLusso test car, with its all-black scheme brightened only by gray stitching and Ebano wood polished to a bright, honey lacquer. The leather is everywhere, and it's so very soft that the driver's seat bolsters in my test car were already wearing out, or shall I say, breaking in like a pair of fine Italian dress shoes. Maserati calls this upholstery Pieno Fiore, and it's clearly worth the $1,490 upcharge, assuming you can stomach the cracks and crinkles of aged cowhide. The microsuede headliner, including the sun visors, completes the Levante's smooth textures. But on the GranLusso, the hot way to spec this trim is with silk from Ermenegildo Zegna, the Italian men's suit maker. The gorgeous fabric covers the seat inserts, doors, and the entire roof. Contrast the silk against a tan or red leather covering the dash and doors: Now you have dressed up this simple interior and made the Levante unapologetically Italian. Two more interior details finish off the Levante: a thin wood band around the outside of the steering-wheel rim, and thick, metal shift paddles mounted to the steering column instead of the wheel. 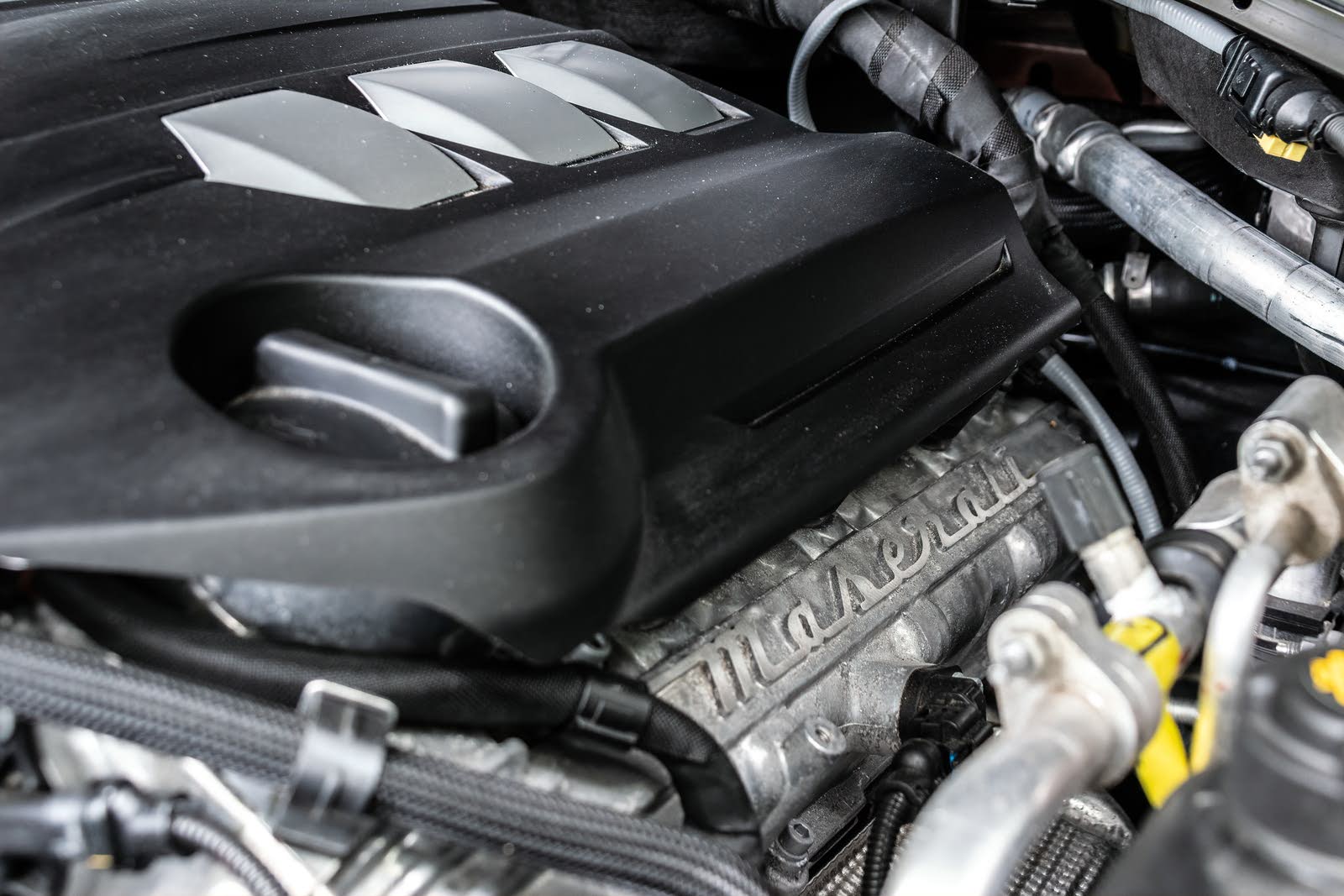 While interior trimmings complement the Levante's fashion-forward attitude, this car's soul breathes through Ferrari engines. It offers four options, and each is hand-built at the Maranello factory—the same magical place that turns out Formula 1 engines. The four choices stem from either a 3.0-liter V6 or a 3.8-liter V8, both accented with twin turbos, an 8-speed automatic transmission, all-wheel drive (AWD), and a preciously loud exhaust. The base Levante's V6 makes 345 horsepower and 369 pound-feet of torque. Skip it, and go straight to the 6-cylinder in the S for 424 hp and 428 lb-ft, like my test car.

The Levante has three drive modes, two of which modulate the power for comfort or slippery conditions. Never use those while driving a Maserati. Select Sport, which deactivates auto stop-start and opens exhaust valves to bypass the muffler. Then switch the gear selector into manual, which I must warn you is fully manual. Just like in a Ferrari, even if you slam the gas pedal, the car will not upshift unless you flick the paddles. It will not downshift for you, either. You do this to play the engine's music. It's very unnatural at first, since the Levante booms like a gorilla while backing out of the driveway and then immediately muffles itself as you set off. It shrieks up hills, gets all gassy in lower gears while coasting downhill, and will positively rip between second and third gear if you hold onto the revs in just the right way. Under full throttle, the exhaust sounds muted. Quirky? Yes. Maserati, like Ferrari, uses a variable exhaust that makes a plethora of sounds—some nasty, some sweet—at unpredictable volumes. It is an instrument you learn to master, and after a week, I knew exactly how to make the most of the engine's searing, gurgling, and altogether oscillating nature.

It's terrible fun that'll cost you a lot in fuel. I averaged 15 miles per gallon during my week with the Levante, which matches its EPA city rating. Do not expect to reach the 21 mpg highway or 17 mpg combined ratings. The two V8s—brand-new for 2019—available in the GTS (550 hp) and Trofeo (590 hp) will suck down even more dinosaur juice. I haven't tested those engines, but you can be assured that if the V6 is this good, the V8s are next-level.

In addition to effortless torque and fast, smooth shifting in any gear, the Levante also sings through its steering. Unlike the steering racks on most cars, this one is hydraulic instead of electric, which gives the driver a clear sense of road feedback and natural weighting. It's like wearing a mechanical Omega instead of an iWatch. Braking is strong. The suspension is firm enough in its normal tune, so there's no need to switch to the sport damper setting. In the normal setting, the Levante rides well. The all-season performance tires (Pirelli Scorpion Verde) held the road, yet it was obvious they can't grip like a dedicated summer tire. These tires are also loud, despite the car's double-paned glass, and you'll never quiet the engine that much. This is a car heated in emotion. Careful, it does rub off on you. 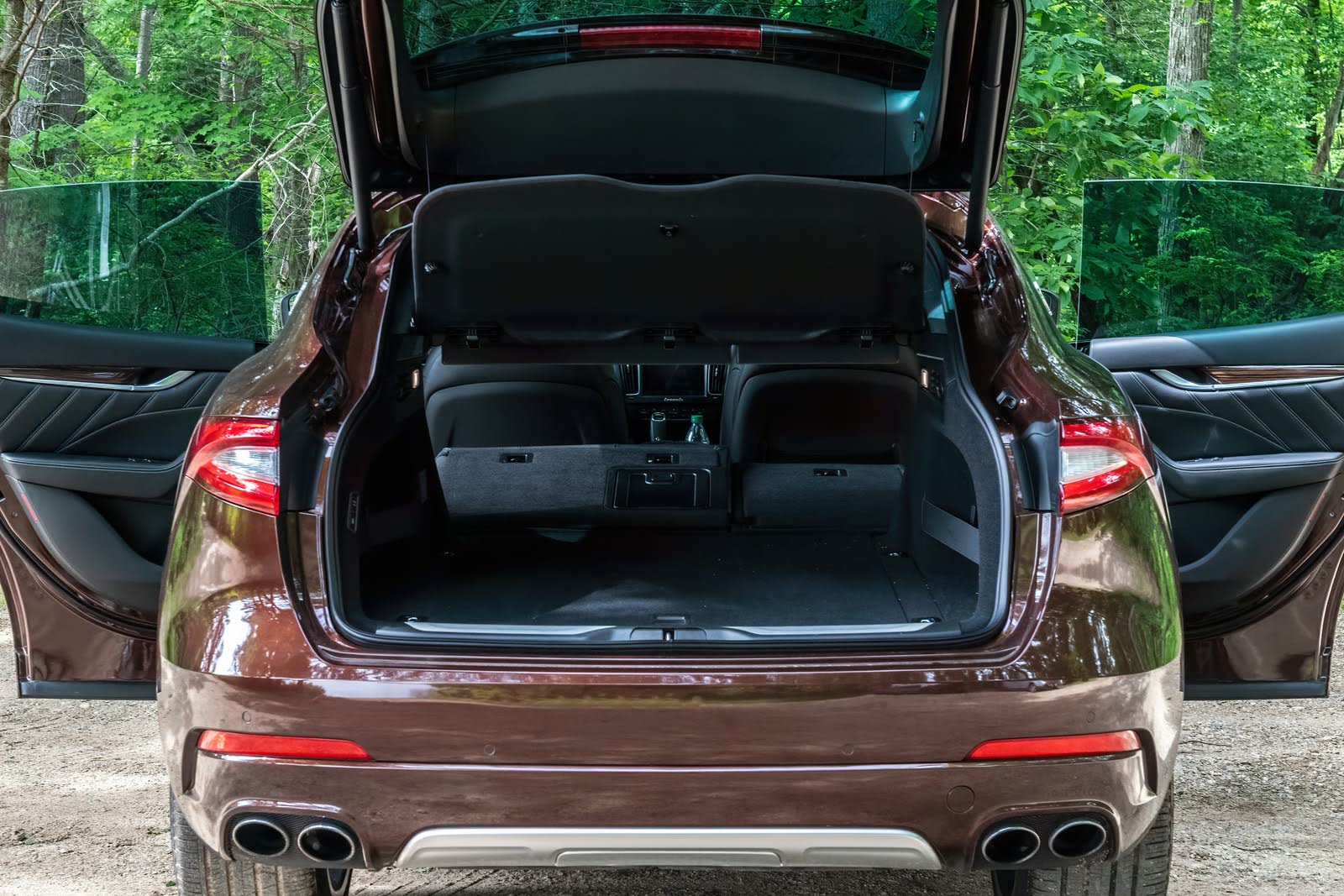 The Levante is enough car for four adults on long cruises, but it does feel small. The passengers will also need to pack light enough to fit their luggage in the cargo hold, which measures only 20.5 cubic feet. Seats down, there are 57 cubic feet available. Headroom is tight in the rear, although that's common, as SUV "coupes" prioritize style over space. You can't see very well out the rear, either. But you also can't load a Ferrari with 36 rolls of toilet paper and a couple of 2x4s.

Maserati attempted to modify the FCA Uconnect infotainment system with two stacked rotary controllers. Upon closer inspection, the top knob is for volume and selecting menu choices, while the bottom knob selects small portions of the screen. Two more buttons allow the user to go back or select submenus, such as the channel list when browsing SiriusXM. But these controls are wonky and don't improve the Uconnect system at all. It's a fast touchscreen with easily placed menus and logical on-screen controls. You'll never need to use those dials. Two hidden switches placed behind either side of the steering wheel control volume, audio sources, and seeking. These you will use. The driving modes and climate controls (except for the heated/ventilated seats and heated steering wheel) are managed by physical switches below the main screen. 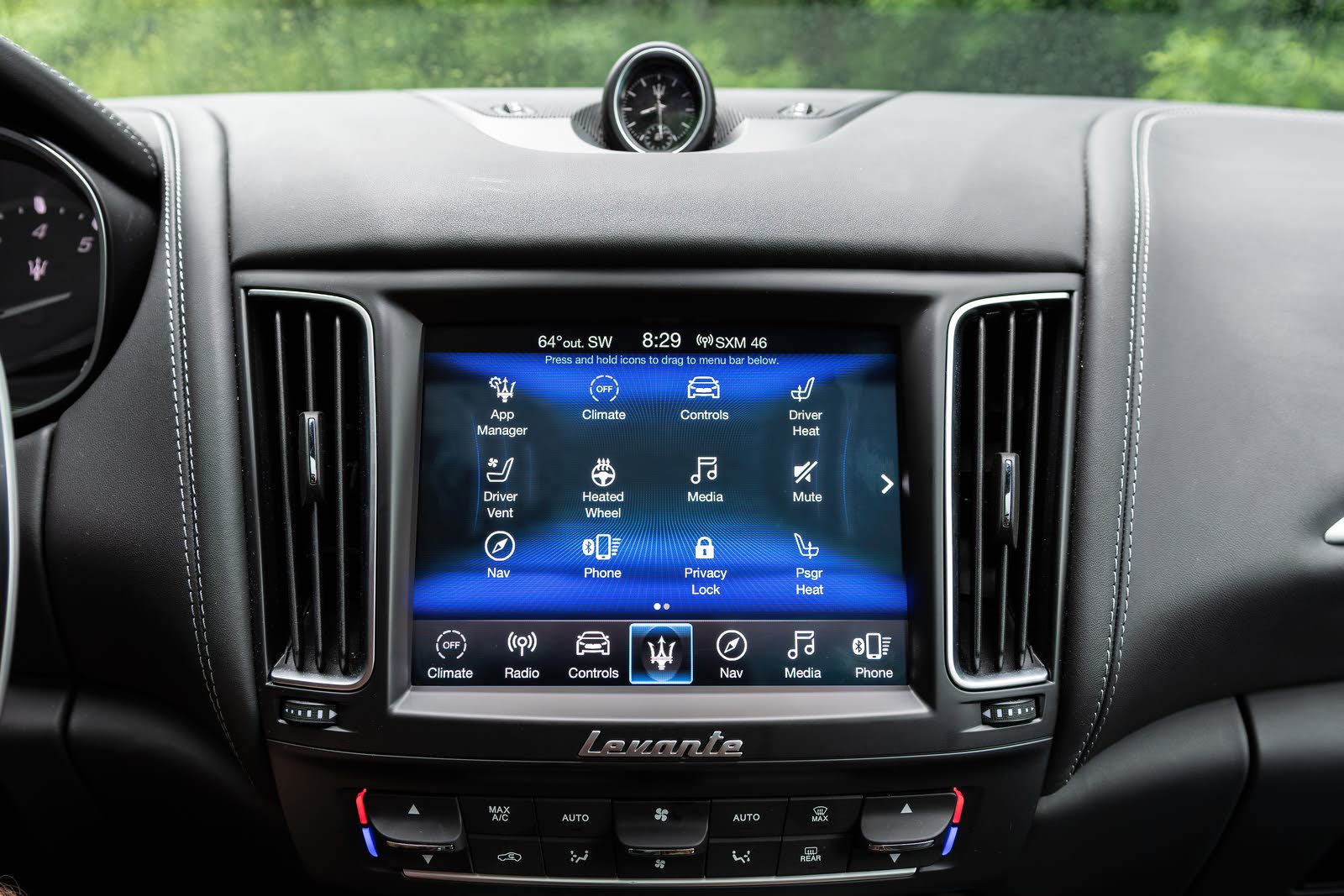 While Apple CarPlay and Android Auto come standard, along with USB ports, live traffic, and a fast and accurate voice-recognition system for map searches, some tech features are missing, like massaging seats, a head-up display, and wireless device charging. The 360-degree cameras, Bowers & Wilkins stereo, and semi-automated driving features are good, but not class-leading in quality. The self-centering function makes jerky steering movements in low-speed traffic, and when you're at a stop, the adaptive cruise control makes you step on the gas pedal to get moving again instead of automatically moving forward. Maserati should have reskinned the infotainment and center display instead of just adding a Trident logo as the home-screen shortcut. That brings down the Levante's tech a notch. But judging it by itself, it's a really good system.

All the tech you can't touch, such as the adjustable air suspension that can be raised several inches for rough roads, or the limited-slip differential that helps power the Levante through tight turns, is engineered within the Levante's chassis—which, I will add, is shared with only Maserati models and no other FCA brand. 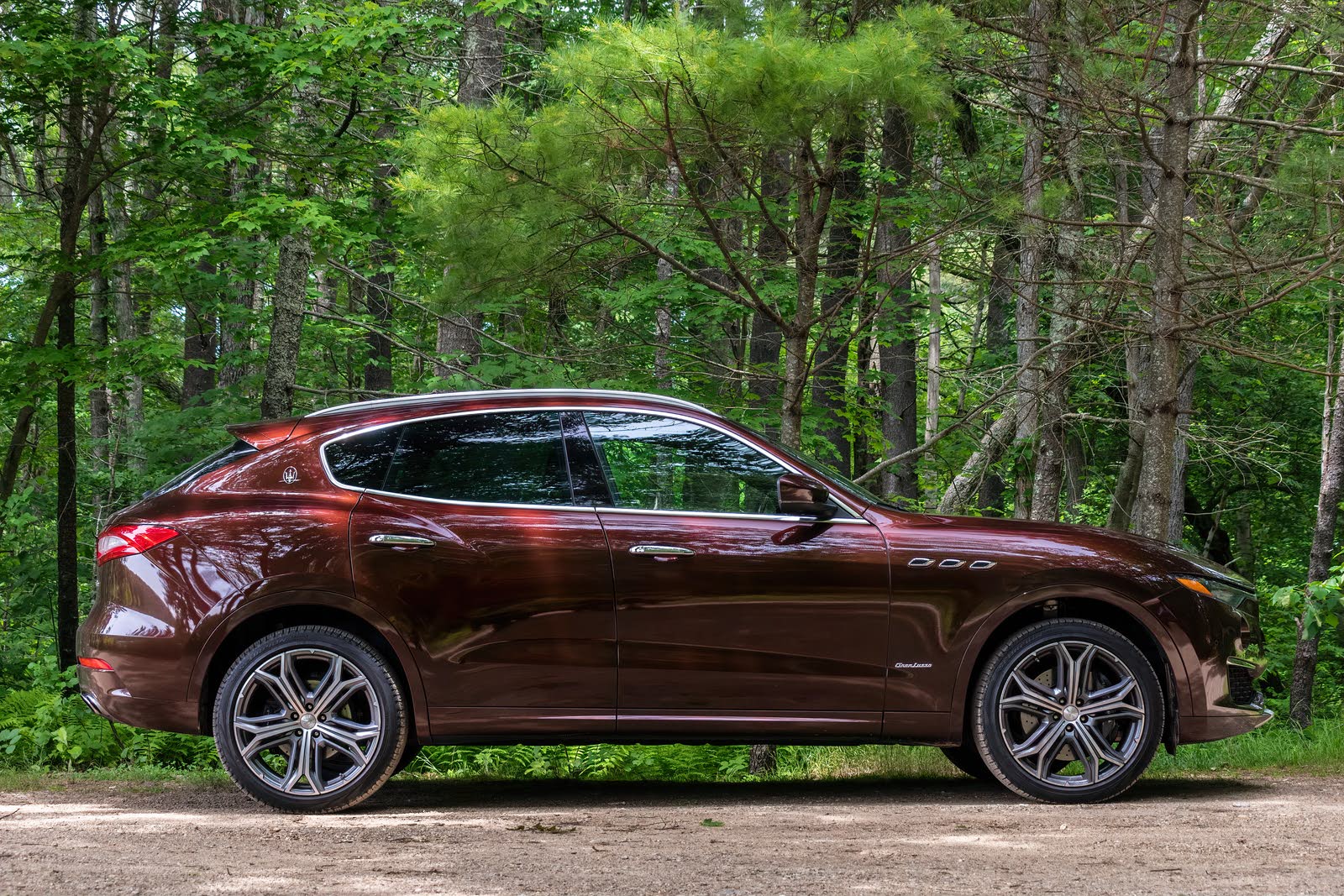 The Levante has not been rated by the National Highway Traffic Safety Administration (NHTSA) or the Insurance Institute for Highway Safety (IIHS) since its 2017 debut. We predict good, but not the absolute best, crash-test scores, since this car is not subject to any public ratings. Driver-assistance systems are optional, including forward emergency braking with pedestrian detection, lane-keep assist, blind-spot monitoring, and adaptive cruise control. 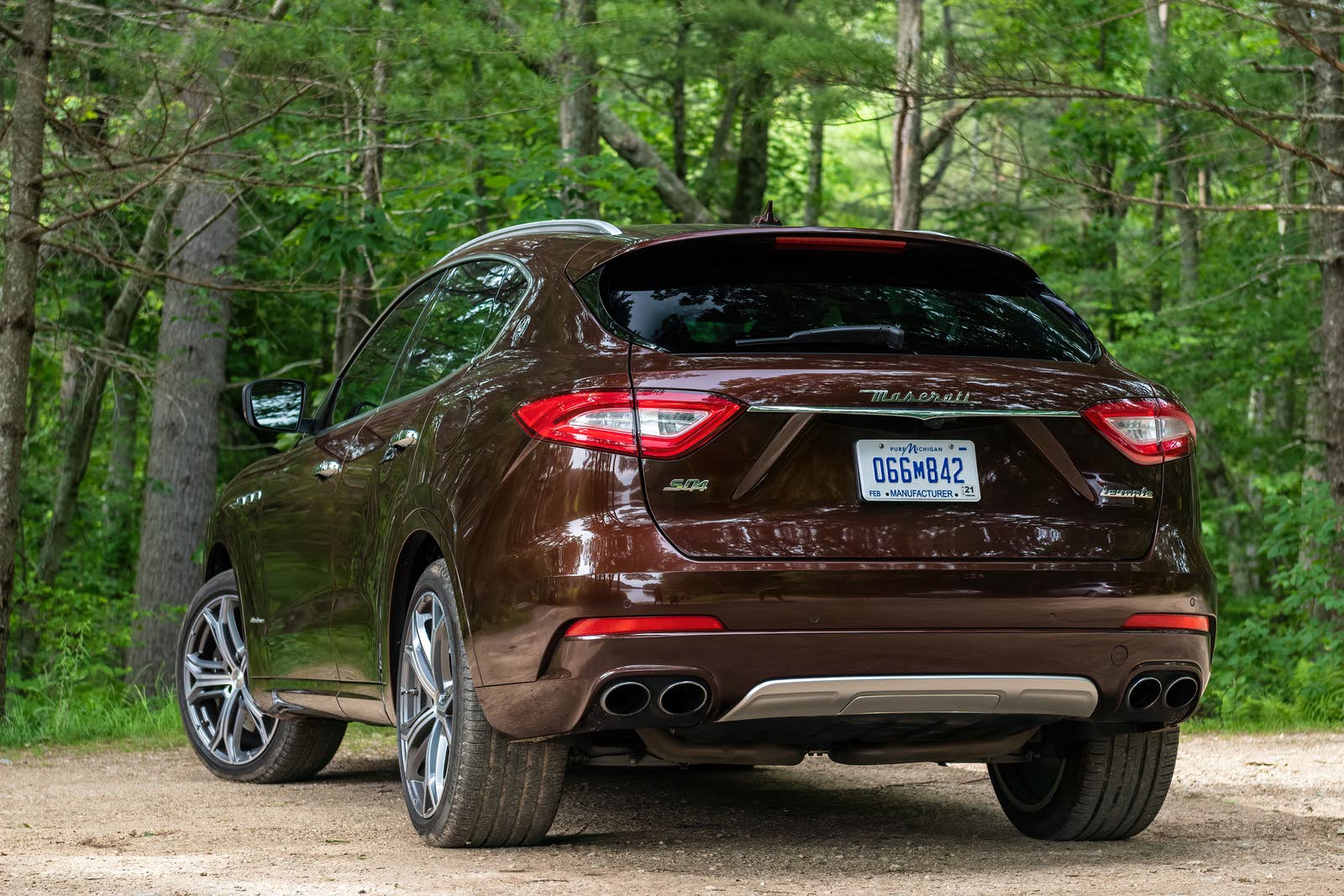 The 2019 Levante starts at $76,980 before a $1,495 destination fee. The S starts at $87,980, the GTS at $120,980, and the Trofeo at $169,980—all before options. My Levante S test vehicle stickered at $102,505 with the upgraded leather, stereo, driver-assistance features, and even options like the Maserati logo stitched into four of the headrests. CarGurus recommends an S GranLusso like my test car, except with the silk interior that comes standard on this trim instead of the optional full leather interior. You will not find much value on a practical basis with a Levante, especially since other sporty SUVs go above and beyond with tech, and feel nimbler to drive. But the Levante sells on its exclusivity—a Ferrari powertrain, racy looks, and exotic interior appointments. Spec it right, and you won't have to explain purchasing a Levante to anyone. They'll get it as soon as you start the engine.

What's your take on the 2019 Maserati Levante?

Tim Find trucks in my location

Guru6Y6V2 Beautiful, love it! Rather expensive, but it is a Maserati! And has a Ferrari engine. If I had the money, I'd buy one!

Have you driven a 2019 Maserati Levante?
Rank This Car

Looking for a Used Levante in your area?

Is It A Good Choices Of Purchasing A Maserati Cars?

Maserati Cars have various kinds of cars options and I am interested in Maserati Levante. I have got that car owns a good-looking SUV and the Active Air Suspension have embedded. However, I heard th...