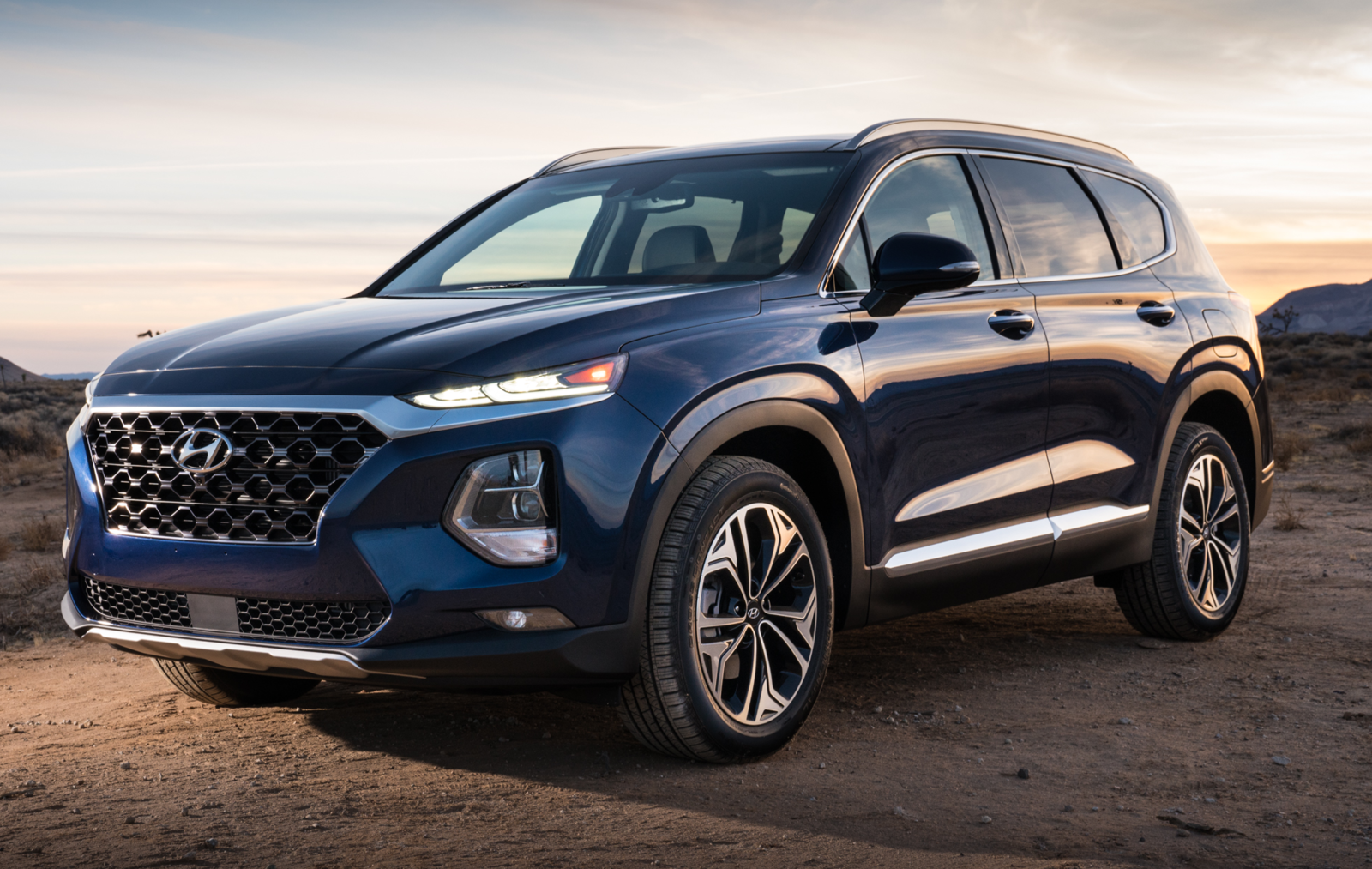 Technically, the 2019 Hyundai Santa Fe is listed as a midsize SUV, but this is a stretch. Now entering its fourth generation, the Santa Fe fits somewhere between a compact SUV like the Toyota RAV4, Honda CR-V, or Nissan Rogue and a midsize like the Toyota Highlander, Honda Pilot, or Nissan Pathfinder.

This vehicle actually replaces the 2-row Santa Fe Sport. The previous Santa Fe was a 3-row version, and it is still available, largely unchanged, but now named the Santa Fe XL. It will most likely be phased out of production, as Hyundai has a true 3-row midsize called the Palisade arriving this summer for the 2020 model year.

But back to the car at hand: The 2019 Hyundai Santa Fe is a true quality crossover. While it's technically large enough to compete against midsize SUVs, it shines as a great value when cross-shopped against other compact crossovers. 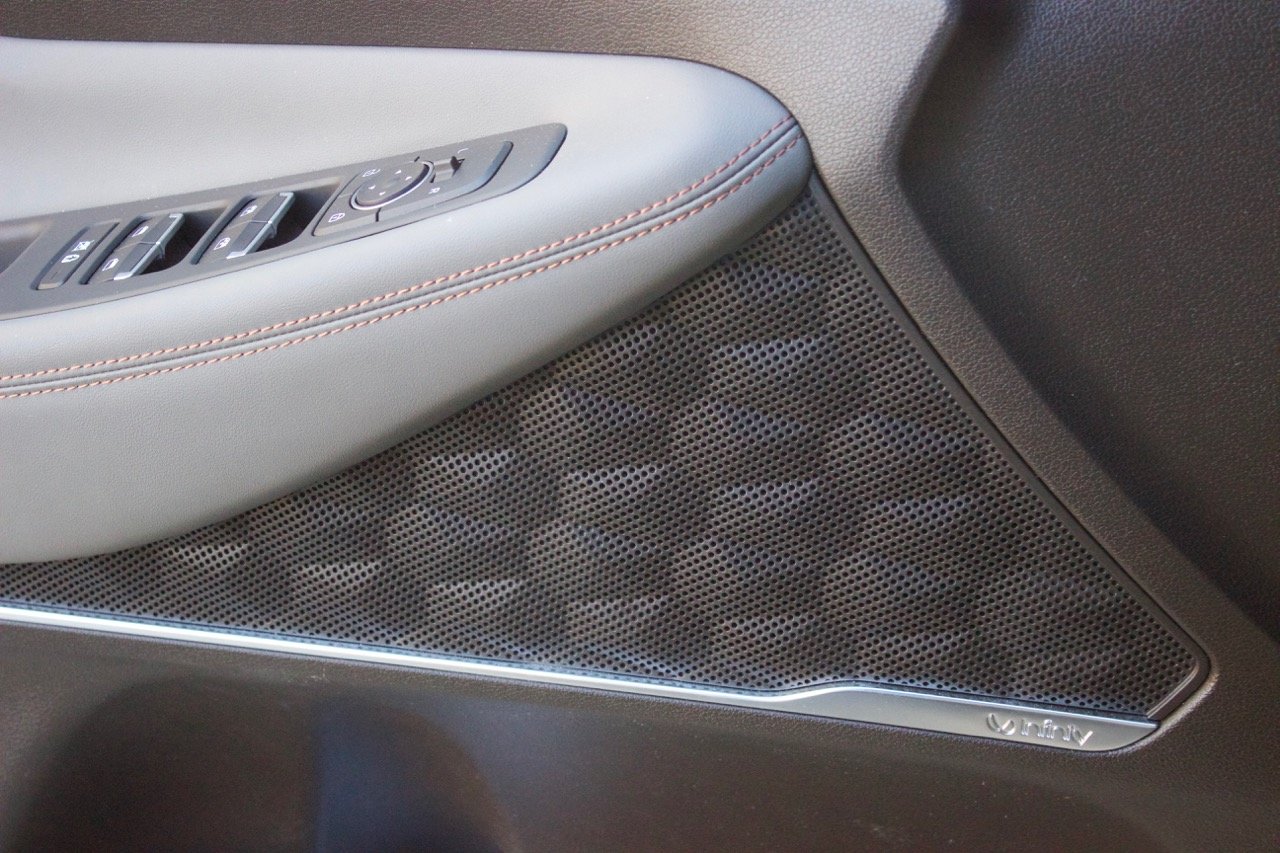 Hyundai styling has long been on the conservative side. When its vehicles did have bolder styling, they still managed to look derivative, but that’s all changing. The 2019 Santa Fe is leading the charge of a new generation of Hyundai vehicles with daring, bold, futuristic exteriors.

That doesn't mean the new Santa Fe's design is perfect. From 2014 to 2018 Jeep Cherokees featured an upper LED strip, which played the role of daytime running lights, and the main headlight assemblies were in mid-level clusters, made to look like oversize fog lights. The new Santa Fe sports an eerily similar configuration, though Hyundai seems to execute this design more effectively.

While the exterior is futuristic, the interior is modern and practical. Interiors can be fun and filled with flair, but their main purpose is functionality. A car like the Kia Soul, for example, can incorporate funky interiors, but above all else, it has to be easy to use. Hyundai puts function first, with deep compartments in the doors and center console.

But that is not to say the cabin is devoid of style. It has a crisp, modern feel, but in a way that is different from nearly every other SUV interior on the market today. Our test model has a surprisingly organic ambiance. It’s bathed in earthy tones, a unique pattern on the speakers, and a neat composite inlay material that extends from the door into the dash. What sets this all off and makes it all work is the textured headliner. It is woven and almost feels like sweatshirt material.

Trims for the Santa Fe are SE, SEL, SEL Plus, Limited, and Ultimate. The base SE trim comes standard with standard 17-inch alloy wheels, high-beam assist, power heated side mirrors, and LED daytime running lights. Inside, the seats are manual control all around, but you also get remote keyless entry.

Moving up to the Limited adds full LED head- and taillights and incorporates turn signals into the side mirrors. The Limited also brings us into the premium realm, with satin chrome door handles, a massive panoramic sunroof, and leather seating.

But our range-topping Ultimate trim test vehicle truly lives up to the name. It’s loaded up with rain-sensing wipers, memory settings for the front seats, heated front and rear seats, and ventilated front seats. 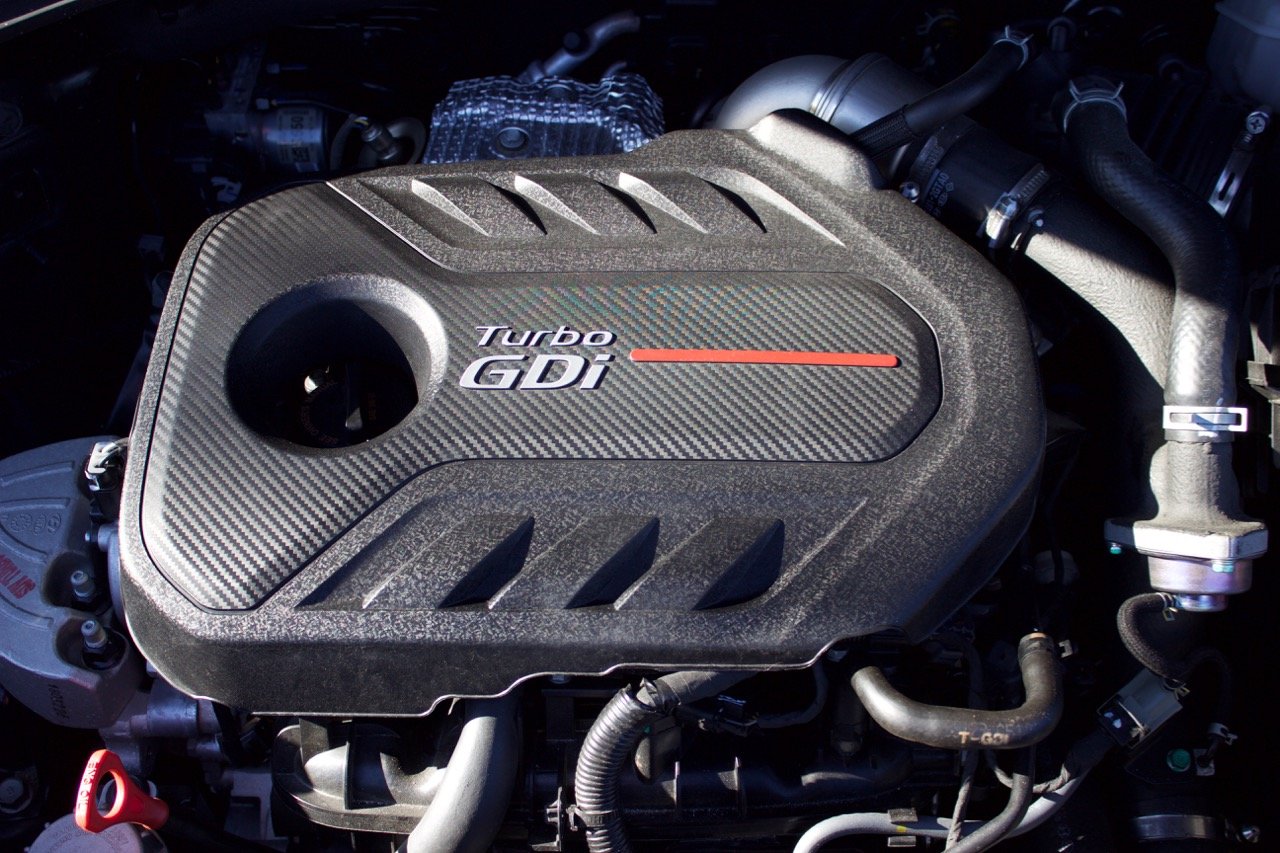 There are two engines available for the 2019 Santa Fe. All trims come standard with the base 2.4-liter 4-cylinder engine, making 185 horsepower and 178 pound-feet of torque.

The Limited and Ultimate are available with a turbocharged 2-liter 4-cylinder engine that makes 235 horsepower and 260 pound-feet of torque. No matter the engine, power gets sent through an 8-speed automatic transmission to the front wheels or available all-wheel drive (AWD).

The base engine is noted as being sluggish, which is unfortunate because the 2.0T is great. It’s too bad this engine is not available in a lower trim, like the SEL Plus, as it would be a great blend of performance and value. The 2.0T provides strong acceleration, both off the line and at highway speeds.

Despite feeling very upright, the Santa Fe actually sits pretty low to the ground, with just 7.2 inches of ground clearance. Even the Subaru Outback wagon has 8.7 inches, and while that means you won’t be able to take the Santa Fe too far off-road, it also means the Hyundai crossover feels pretty level in corners. There is not as much body roll as you might expect for a vehicle this size. And the AWD Santa Fe does have a locking differential, which could help when driving through a muddy field or on the beach.

Back on the road, the Santa Fe shows real composure in its driving dynamics. The steering feels ideally weighted, and the turning response is actually pretty tight. It’s not overly heavy but it provides a level of feedback you might not expect from the family-hauling crossover segment. For a family vehicle, the Santa Fe actually feels pretty well connected to the road.

The Santa Fe has a drive mode selector with Sport, Comfort, and Smart settings. These presets can alter the throttle response, shift-mapping and, for AWD variants, the power dispersal to all four wheels.

The most fuel-efficient Santa Fe is a front-wheel-drive (FWD) version with the 2.4-liter engine. That should return 22 mpg city, 29 city, 25 combined. Our AWD turbo model should return 19 mpg city, 24 highway, 21 combined. And, in our week of combined city and highway driving, we actually recorded an average fuel economy of 22 miles per gallon. 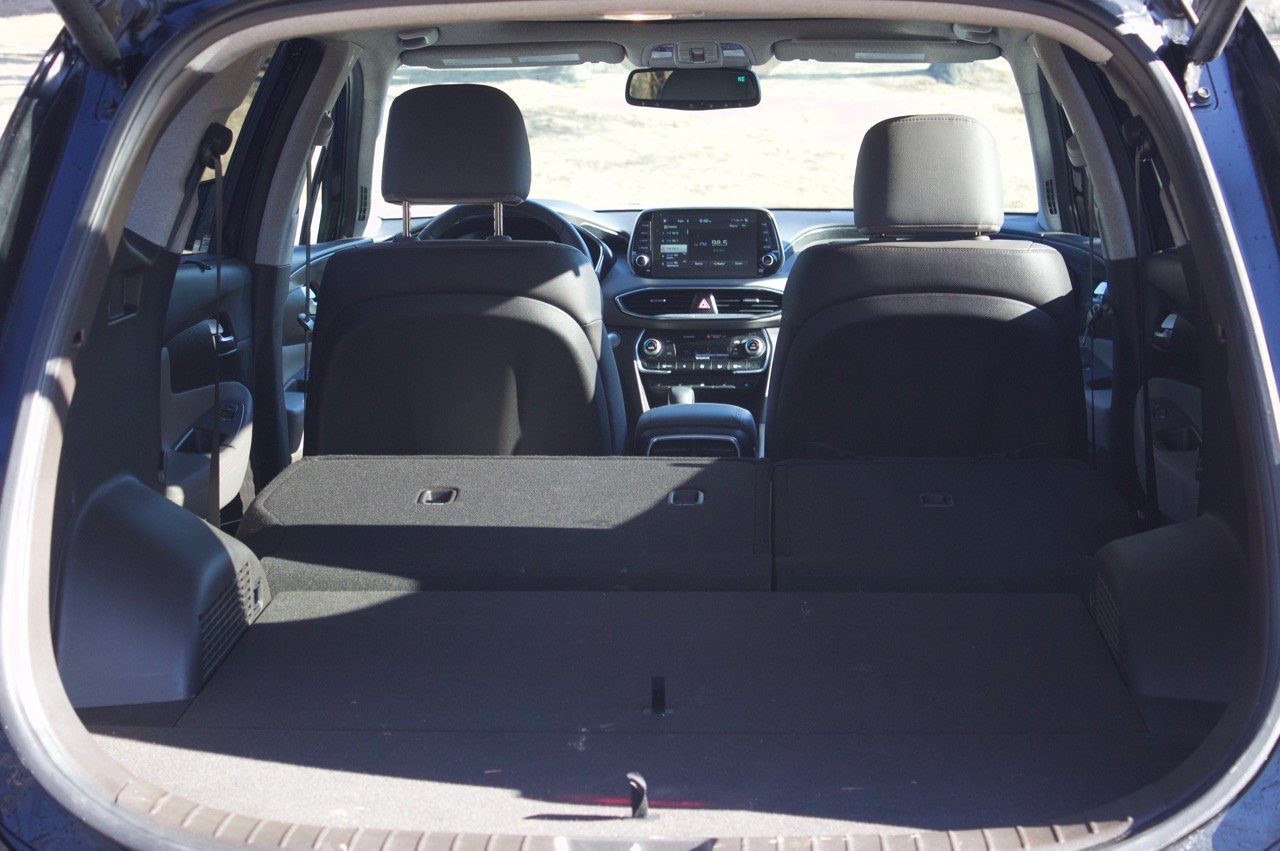 With the rear seats folded, the Santa Fe offers 71 cubic feet of cargo space, which isn't much for a supposedly "midsize" crossover. It's 4 cubic feet less than the compact Honda CR-V, which has 75. The 60/40 split-fold rear bench is easy to drop with levers on the side of the seats, or via rear buttons that are easily reachable while standing at the opened rear hatch. With the rear seats up, the Santa Fe has 35.9 cubic feet of cargo space. The CR-V has 39.2.

The Santa Fe is available with a hands-free power liftgate that doesn’t require balancing on one leg like some other systems. Just walk up to the back of the Santa Fe with the key fob in your hand or pocket. The car will beep or flash the lights to signal it knows the fob and you are back there. Then after a few seconds, it’ll automatically deploy.

Considering its paltry cargo figures, it's a good thing the Santa Fe is rife with clever storage solutions, including multiple compartments in the rear, bins in the front and rear doors, and deep center console bins. 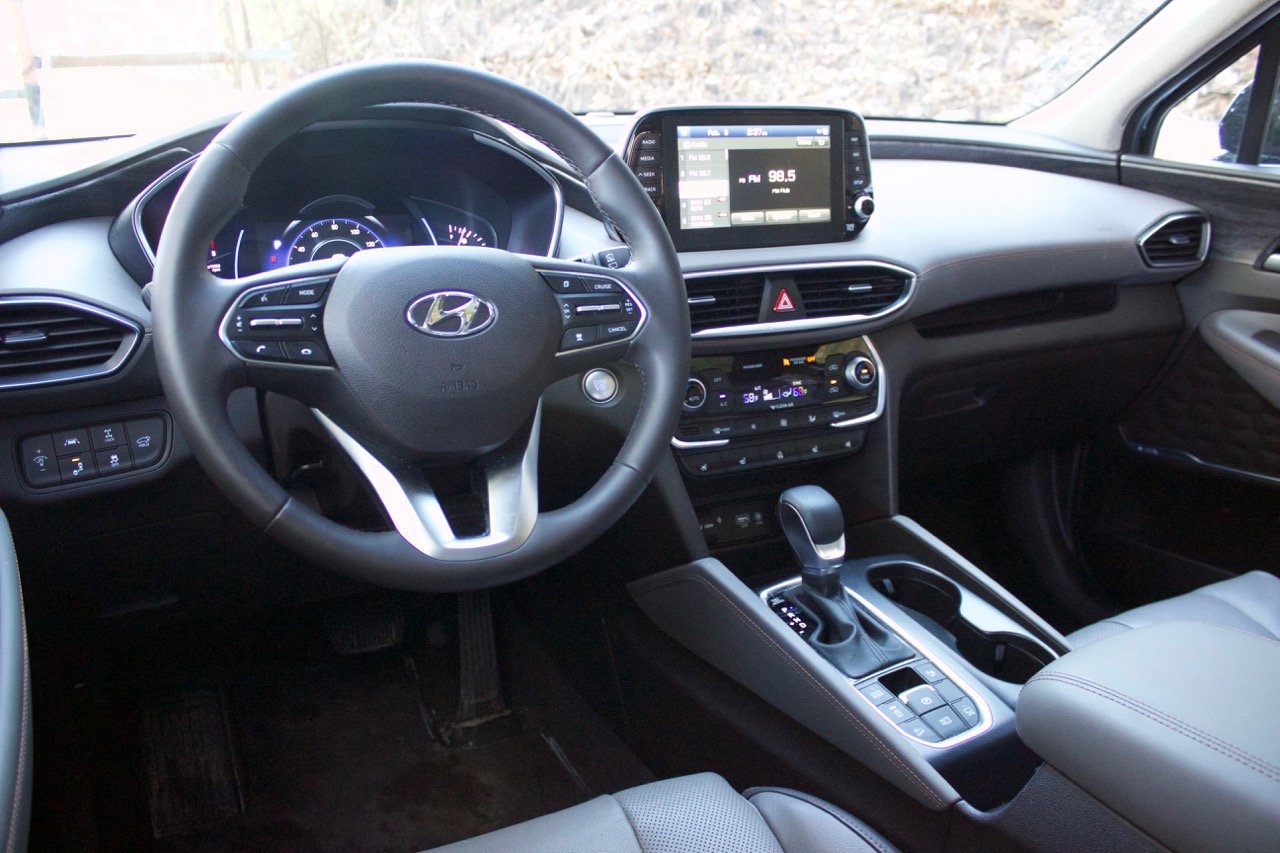 There is a recent trend among automotive interiors in which infotainment systems are packaged in "floating" screens, placed atop the dash. I’ve often criticized these as lazy designs, but after repeatedly using them in multiple vehicles, I don't mind them anymore. In the Santa Fe, specifically, you’ve got hard buttons and dials on either side of the screen to fall back on, meaning there is a minimal learning curve.

The touchscreen system itself has a logical layout and is easy to use. It has bright graphics, crisp fonts. The Santa Fe's base SE trim comes with Bluetooth connectivity, a USB port, and a 7-inch touchscreen infotainment system with Apple CarPlay and Android Auto. SEL and above get satellite radio, HD Radio, and Hyundai’s BlueLink infotainment system, which now features Alexa integration. The Ultimate caps things off with a head-up display and a wireless charging pad, and it upgrades the infotainment to a larger 8-inch touchscreen. Hyundai makes a nice choice of putting the heated seat switches on the door, making them easier to reach. Our Ultimate test vehicle also featured rear USB ports and a wall-style power outlet. 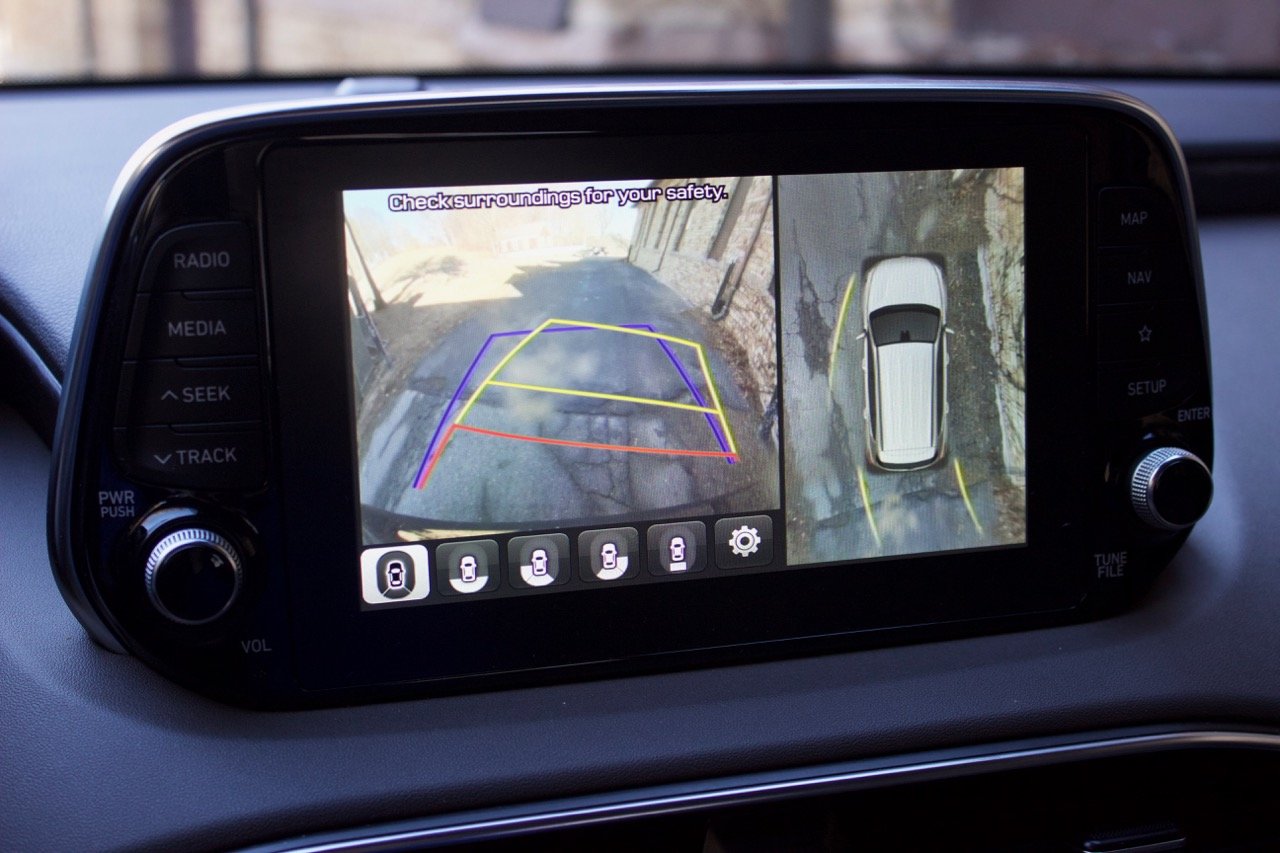 The Santa Fe comes standard with a full array of front- and side-impact airbags, a reversing camera, and a tire pressure monitoring system. It’s also among the latest crop of vehicles to come standard with a full suite of driver-assistance features. Hyundai calls it Smart Sense, and it includes forward-collision avoidance, blind-spot monitoring, lane-departure warning, and adaptive cruise control that can stop and go with traffic.

It also has rear cross-path detection and, more than the typical visual and audible alert, it provides visual cues in the instrument panel to tell you what side of the vehicle the issue is on. This is simple, effective, and helpful.

A new standard feature on the Santa Fe is the Safe Exit Assist System. There's a button on the driver’s side door that looks like the child-proof lock button, but when activated, the rear child-proof locks get tied to the blind-spot monitoring. If a car is coming up on your flank, the rear doors won’t open. This is rather brilliant. 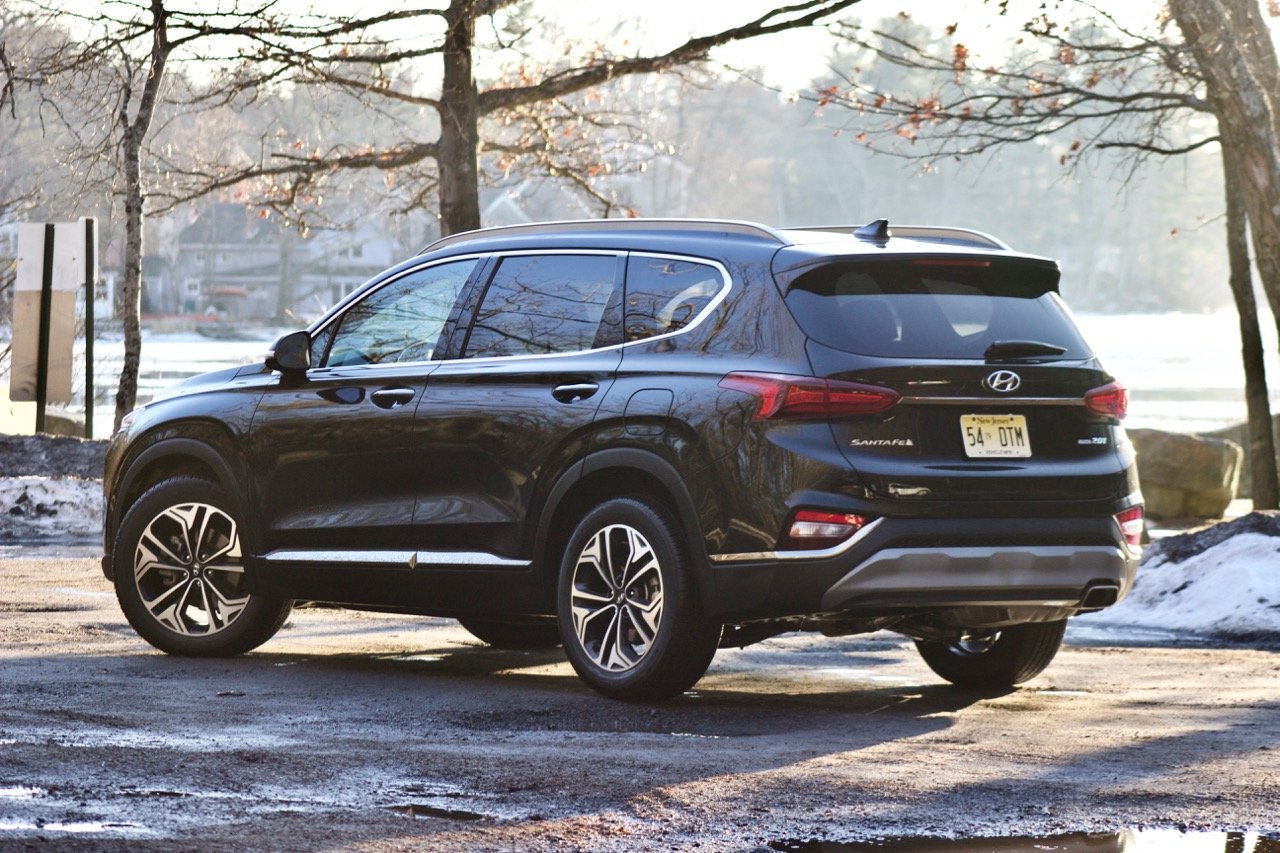 The 2019 Hyundai Santa Fe has a base MSRP of $25,500, and the SEL starts at $27,600, while the Limited starts at $32,600. A Limited Turbo starts at $34,200, and the range-topping Ultimate Turbo AWD costs $38,800. This is very much in line with compact SUV pricing, and if it’s value you seek, CarGurus recommends the base SE trim. It offers tons of content as standard equipment, though if you want more creature comforts, the SEL Plus is a great blend of value and features.

“In-between” SUVs are becoming more popular. A segment that really only included the Ford Edge and Nissan Murano now includes the upcoming Honda Passport, and you can probably add the Santa Fe to that as-yet-undefined class of vehicle. There probably needs to be a realignment of vehicle class. Whenever that happens, the Santa Fe will be there.

Hyundai’s played things pretty safe with its first cars for the American market, and if you've haven't been paying close attention, you might think the company still takes that safe route. But the Korean automaker has serious ambitions. This is the brand that created the Veloster sports car and the Genesis brand. The Hyundai Santa Fe should be taken seriously, as it has the goods to be considered one of the top SUVs on the market. The combination of bold styling, composed driving, and solid value make the Hyundai Santa Fe an SUV with which to be reckoned.

Users ranked 2019 Hyundai Santa Fe against other cars which they drove/owned. Each ranking was based on 9 categories. Here is the summary of top rankings.

Have you driven a 2019 Hyundai Santa Fe?
Rank This Car

How To Look Up "Comparable Listings"?

Does it make a difference in driver comfort within the various trims?

Twice to the dealer in a week

Just purchased Hyundai Santa Fe 2019. The salesperson told me that I need to have OnStar to be able to start the engine remotely via MyHundai app. Is that true?

322 views with 3 answers (last answer about a year ago)