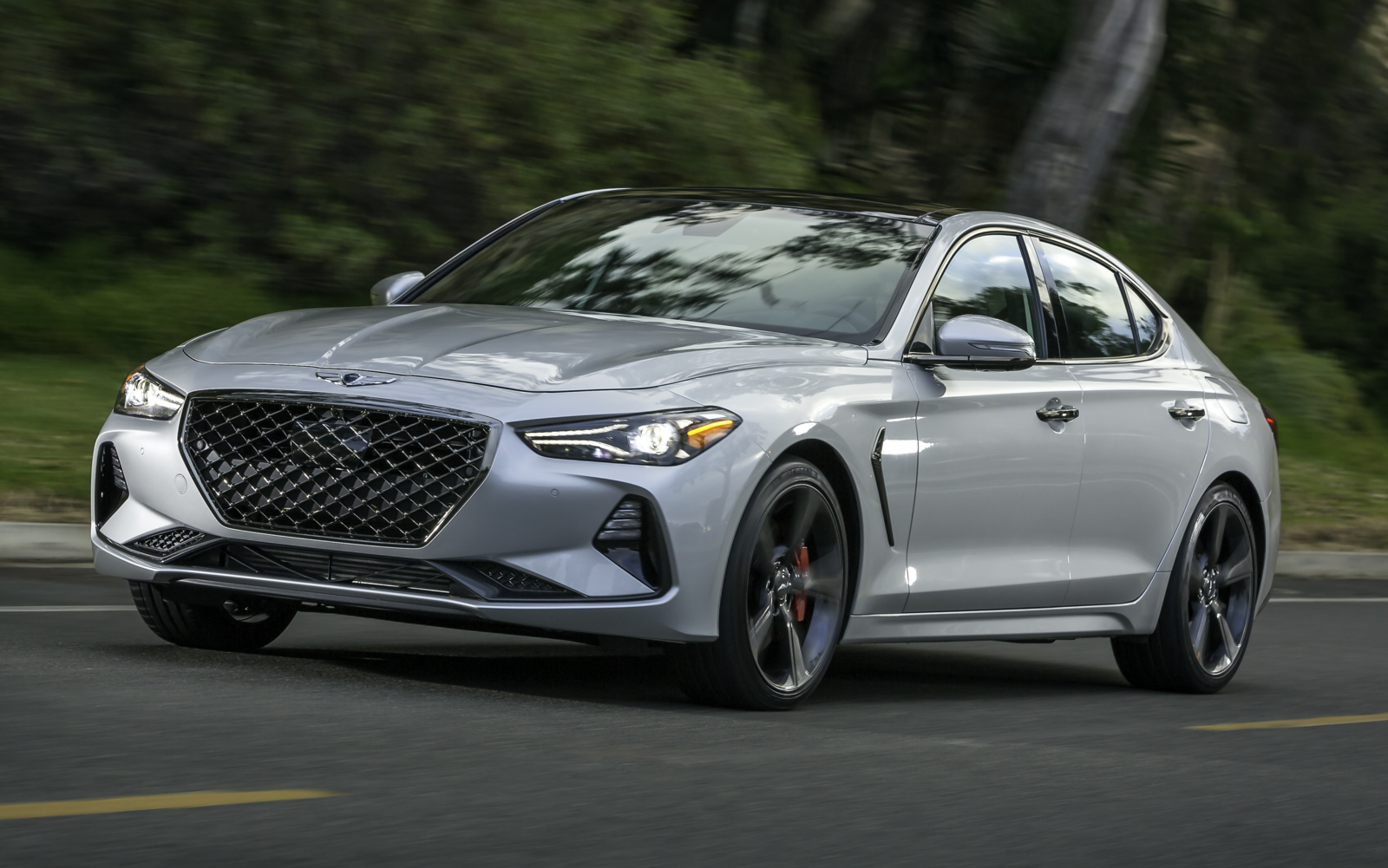 In 2017, Hyundai launched a new brand, Genesis, as a dedicated car company vying for new showrooms and tens of thousands of potential new customers. At least in theory, what worked for Acura, Lexus, and INFINITI should, with billions of Korean won and top designers and engineers plucked from Germany, work for Genesis. The 2019 G70 is the third car in the budding Genesis lineup, but the first all-new, ground-up design. What’s shocking, for a car hellbent on battling on the BMW 3 Series and other compact luxury sedans, is how good it is. 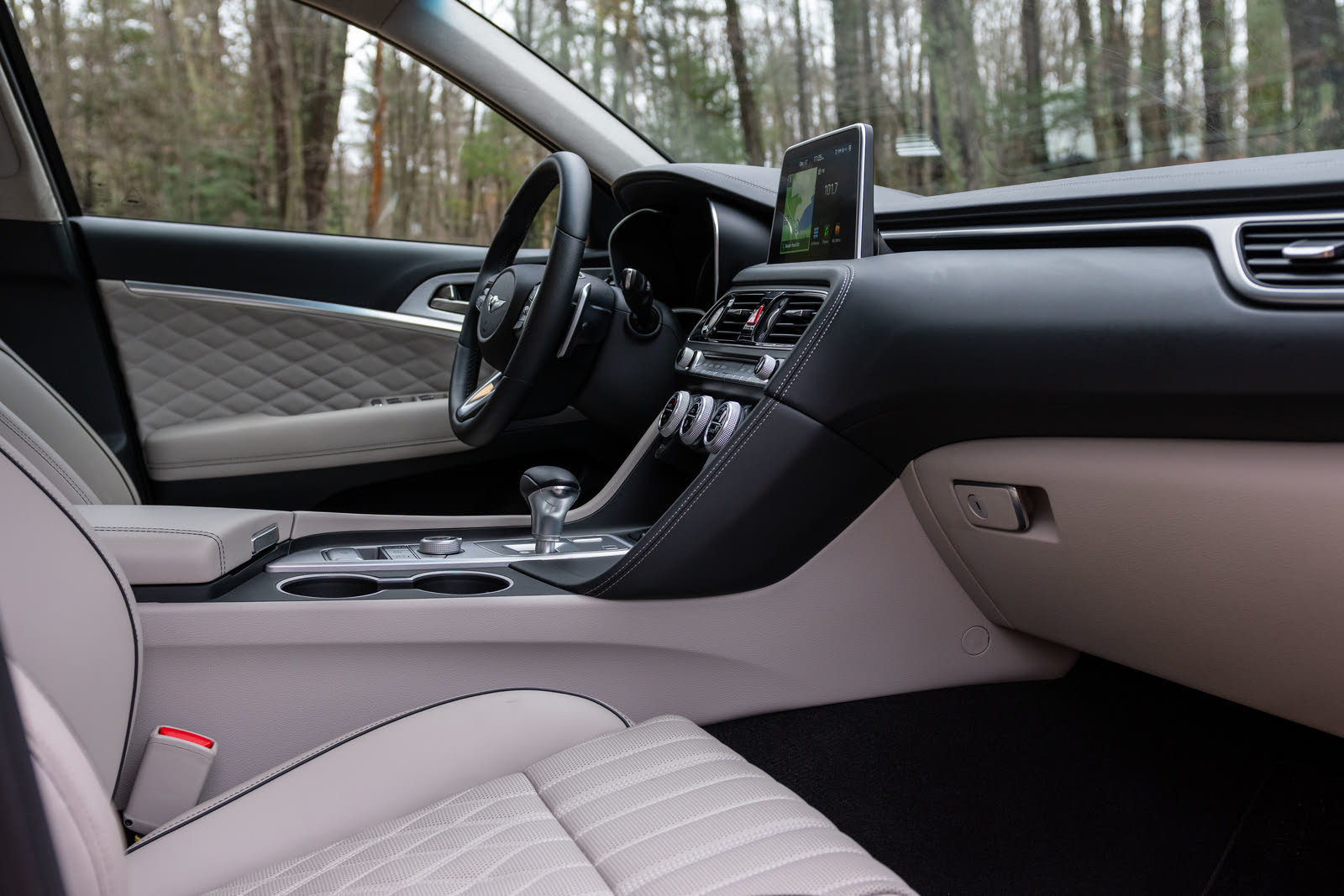 When the Genesis was still just a model in Hyundai's lineup, the company's design team amalgamated pieces of top-selling luxury cars into a characterless shape. That Genesis was generic. In 2019, the Genesis brand has styling cred courtesy of design chief Luc Donckerwolke (formerly of Bentley) and counts ex-BMW M engineers among its chassis developers. Yes, the G70 still riffs off the standards in this segment. It reminds us of the Infiniti Q50 from the side, the layered LED taillights mimic a BMW 2 Series, and the teardrop headlights hint at the Alfa Romeo Giulia. But overall, the G70 is very much in its own element. It’s a mature, unassuming shape with mild hood creases, crisp shoulder lines, and all the classic proportions of a low, rear-wheel-drive (RWD) sedan. A few upright and diagonal creases break up its fluid shape. The cross-hatched chrome grille is the loudest part of the entire car. The G70 plays the part of European sport sedan—even if its home country, until now, was a bit-part actor in high-end cars—with sincerity. A rookie-of-the-year award won’t suffice. The G70 has all the confidence of a luxury car well into its fifth model year.

The inviting appearance continues inside. Knurled metal dials for the climate and stereo, damped switchgear across the dash, and business-attire colors are simple and formal. There’s nothing extraordinary happening with ambient lighting or enormous digital screens, just padded materials, aluminum trim, and tight panel gaps with contrast stitching. Our car’s Nappa leather was as rich as any competitor’s, with contrast piping and gorgeous, curved diamond-quilted inserts on the doors. The headliner is supple, as is the steering wheel. The only downside is an infotainment system, an instrument panel screen, and some switchgear lifted from Hyundai and Kia models costing half the price. But those cars have risen in quality to the point that their lifted features are not out of place in the G70. Never once did I climb into the G70 and feel short-changed. 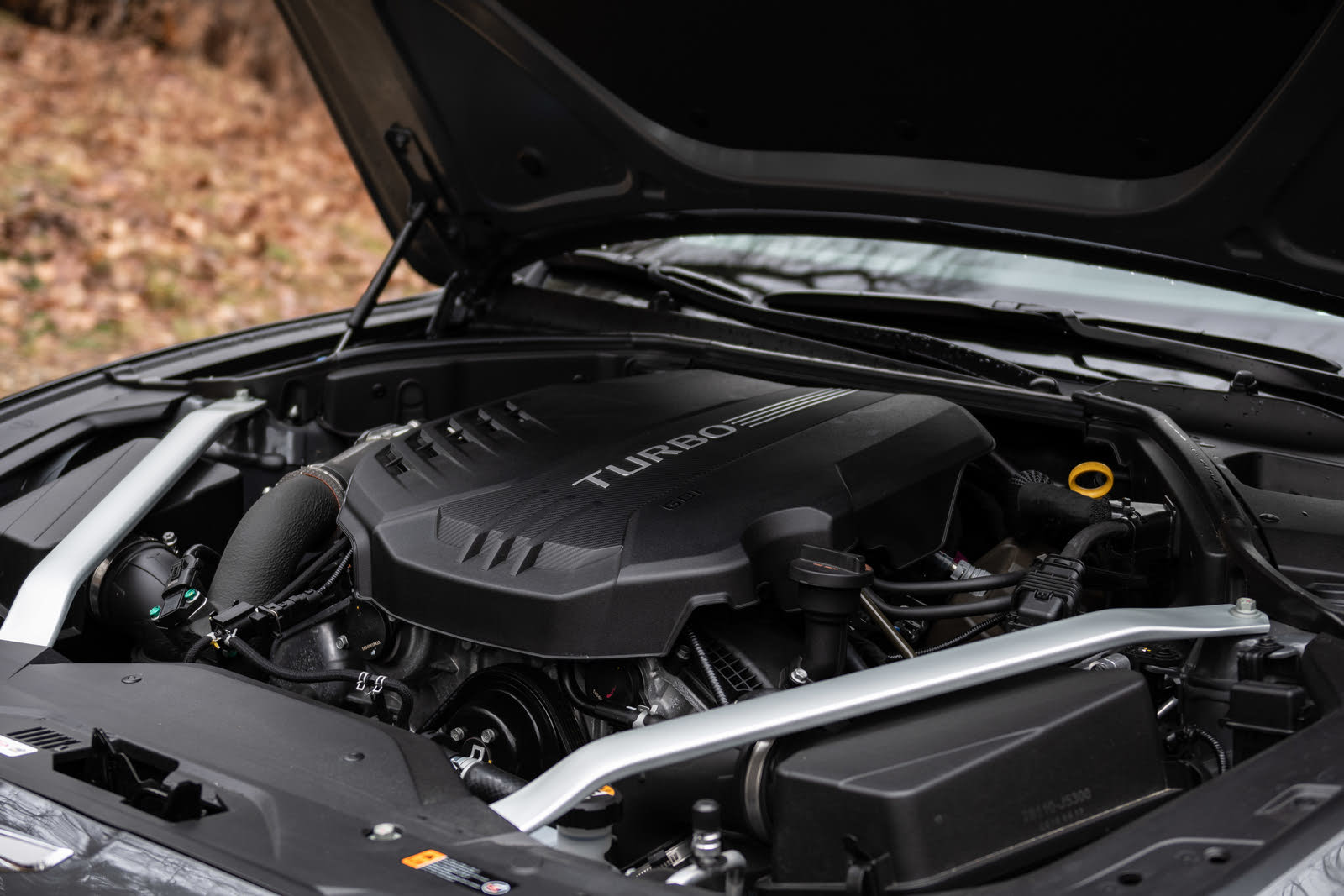 Starting the G70's engine is an experience, every time. A deep, throaty growl emanates from its dual exhaust pipes. Around town, the exhaust always purrs, no matter the driving mode. It’s an audible delight and refined at the same time. Of course, that’s only if you choose the 3.3-liter twin-turbo V6, which our test car had. Seriously, this engine and its 8-speed automatic square the G70 with the class aces: the Audi S4 and BMW 340i. With 365 horsepower and 376 pound-feet of torque, the G70 will never lack thrust, ever. It’s always on the boil and ready to rock, regardless of whether you’ve selected the car's Sport driving mode. Despite this excitement, it’s also well behaved and smooth.

The base engine, a turbo 2.0-liter four, is entirely adequate. It offers 252 hp and 260 lb-ft, yet it’s no match for the BMW 330i’s silky and sonorous 4-cylinder. The 6-speed manual is a sore spot, too, and wasn’t reengineered any better than the version that appears in a $16,000 Hyundai Accent. It’s amazing that Genesis even offers a stick, as competitors have dropped them left and right, but word is they’re hustling to improve the manual. For now, I’m sorry to report, stay away from it.

RWD comes standard, and all-wheel drive (AWD) is optional on all trims but can't be had with the manual. All V6 trims pack more performance goodies, like a limited-slip differential, Brembo brakes, a stiffer suspension, and summer tires. There is a benefit to choosing the stick-shift Sport, as it includes staggered-size tires and a sport exhaust. A limited 400-car run of the G70 Dynamic Edition carries the best summer tire of them all: the Michelin Pilot Sport 4S. Genesis fitted our test car with 18-inch all-season tires for cold-weather driving.

Handling, steering, braking—they’re all righteous. Brake-pedal feel is firm and responsive. The G70 provides accurate steering with the right amount of turn-in, without anything feeling too assisted or artificial. In short, the G70 feels organic as it goes down the road, allowing the driver to be confident and fully aware of the car’s abilities. Fuel economy is the only sufferer, as I got only 22 mpg over 500 miles. The G70 is EPA-estimated to get between 18 and 22 mpg city, 25 and 30 highway, and 20 to 25 combined. Those are middling numbers, but honestly, if you love driving, you won’t care. 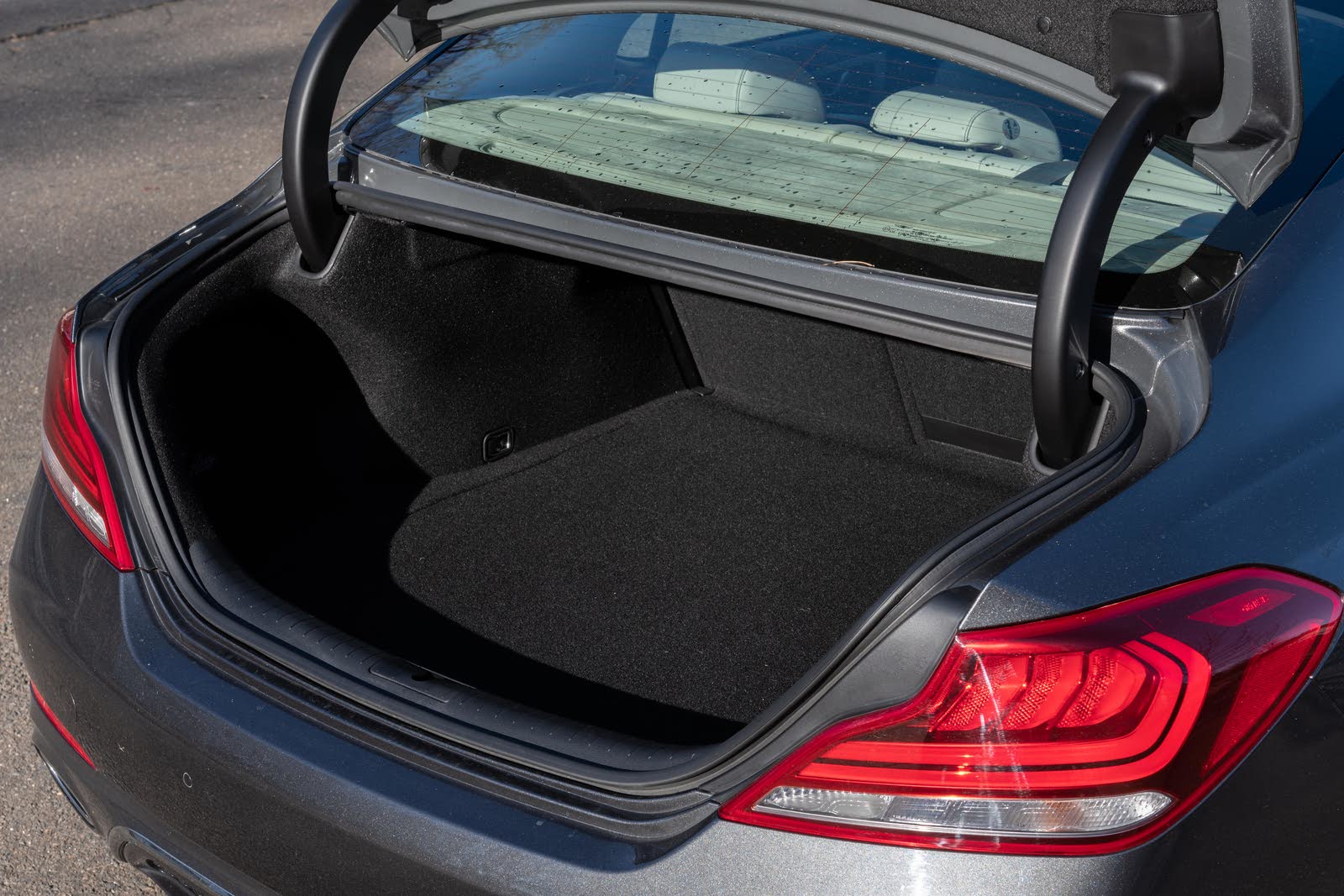 What’s most refreshing about the G70, aside from the way it drives, is how conventionally it operates. The G70 is user-friendly, while competitors redesign shifters, replace buttons with touch capacitors, and generally make the simple complex. Anyone can start driving and make the usual adjustments within seconds. A dashboard canted toward the driver, large and well-marked controls, analog gauges, and a legible touchscreen make the G70 very easy to live with on a daily basis. Like the Honda Accord, the sitting position is nestled within the cockpit and the sight lines are generous in all directions. You'll feel one with the car, especially with the optional 16-way driver’s seat (the front passenger can move in only 12 ways). The backseat is roomy enough for a compact sedan, offering ample leg- and headroom. Not once did I hear anyone say they were cramped. Buttons on the upper left side of the front passenger seat's back offer quick adjustment, should the rear passenger’s cries for “Move up!” go ignored. Trunk space measures just 10.5 cubic feet, which is less than I can fit in the back of my Jaguar coupe. The seats can be dropped, however, which is something my car cannot do. 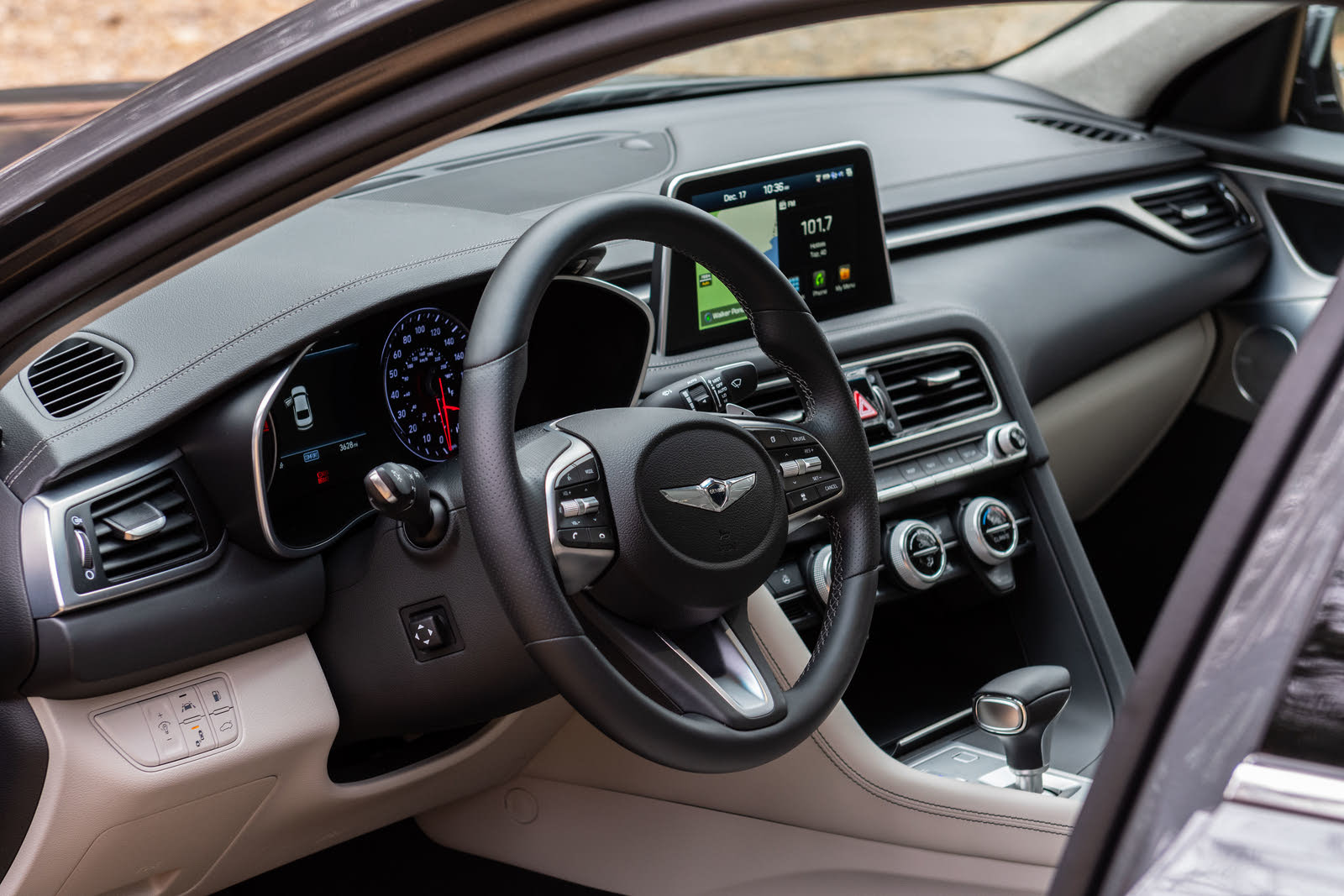 Unlike the dual-screen setup in INFINITI models, the G70’s tech faults are not deal-breakers. However, they come off as unfinished, which is annoying for a car in this price range. The garish yellows that color the nav, the tiny on-screen buttons to adjust the map, the typefaces, and the general interface look low-rent, and that’s because they’re directly swiped from the Hyundai Sonata, Kia Soul, and similarly lower-priced models. The same goes for the multifunction display in the instrument cluster. A Genesis-exclusive reskin, at the very least, is in order. These screens are quick and mostly logical, so there’s no frustration. They’re also small in today’s climate, but that’s also not the problem. Glance at the latest interfaces from Audi, BMW, or Mercedes, and you’ll find elegance and a sophisticated polish to the technology. Clearly, Genesis didn’t a put a dime toward it.

That’s not to say it doesn’t work. Voice recognition is fast and accurate. The system can interpret a few words, look up a location online, and display the correct spot within seconds. Map updates, SiriusXM, traffic data, and remote services called Genesis Connected are included for three years. Apple CarPlay and Android Auto are standard, as is a wireless charging pad. The head-up display shows when other cars enter your blind spots, and in Sport mode, it italicizes the speedometer’s numbers. The 360-degree cameras watch your wheels, making it easy to prevent curb rash. The lane-keep assist works well in traffic, although it’s not up to the level of Mercedes or Tesla. Same goes for the 15-speaker Lexicon stereo: It’s good, but not great. 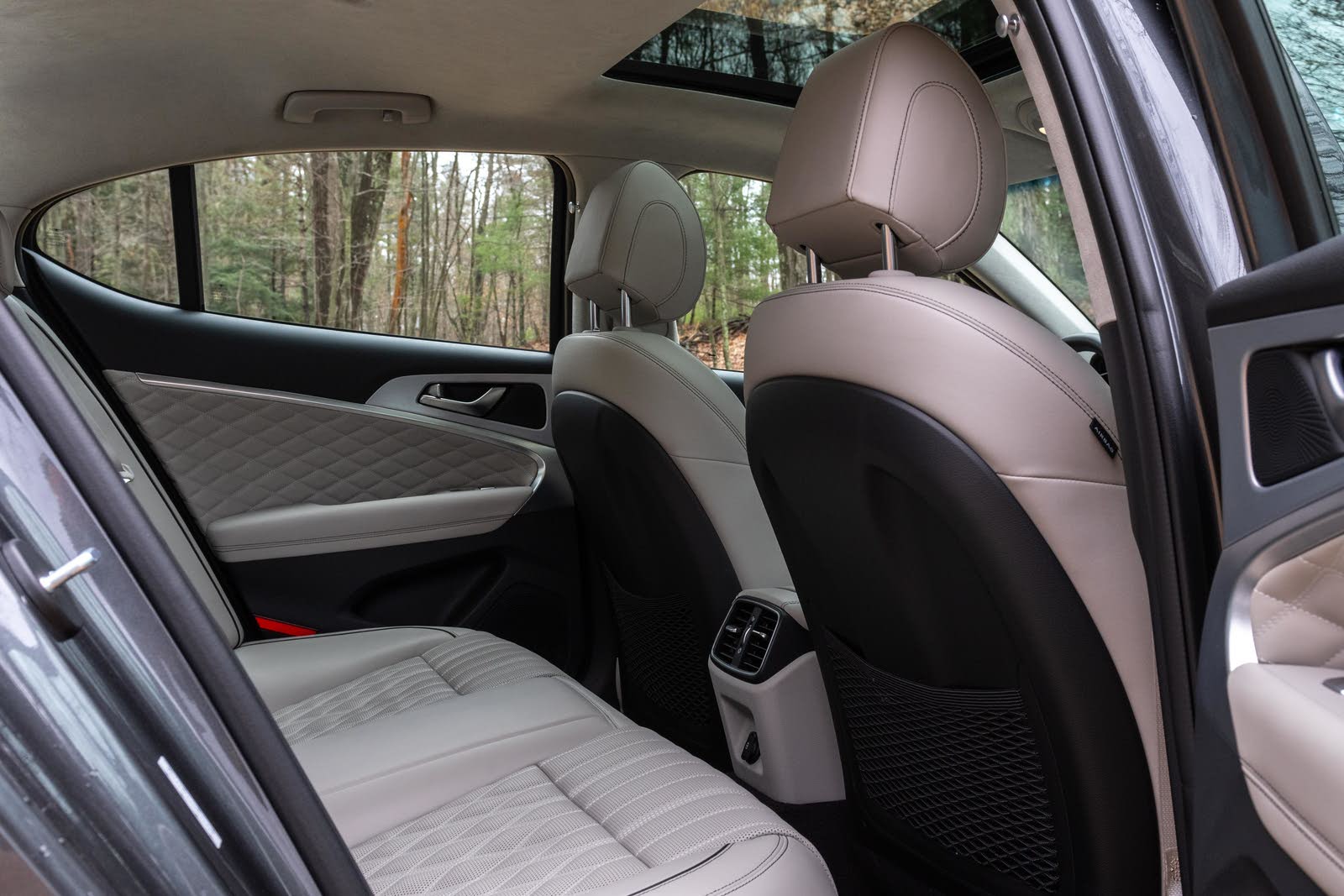 The 2019 G70 has not yet been rated by the National Highway Traffic Safety Administration (NHTSA). We expect the agency to crash-test it. So far, the results are very good. The Insurance Institute for Highway Safety (IIHS) rated the G70 as a Top Safety Pick+, its highest award, for scoring the top ratings in every test, including for headlight performance and front-crash prevention. Forward emergency braking, pedestrian detection, blind-spot monitoring, lane-keep assist, a driver-attention monitor, and adaptive cruise control come standard on all models. A driver’s knee airbag and auto high beams are also included. 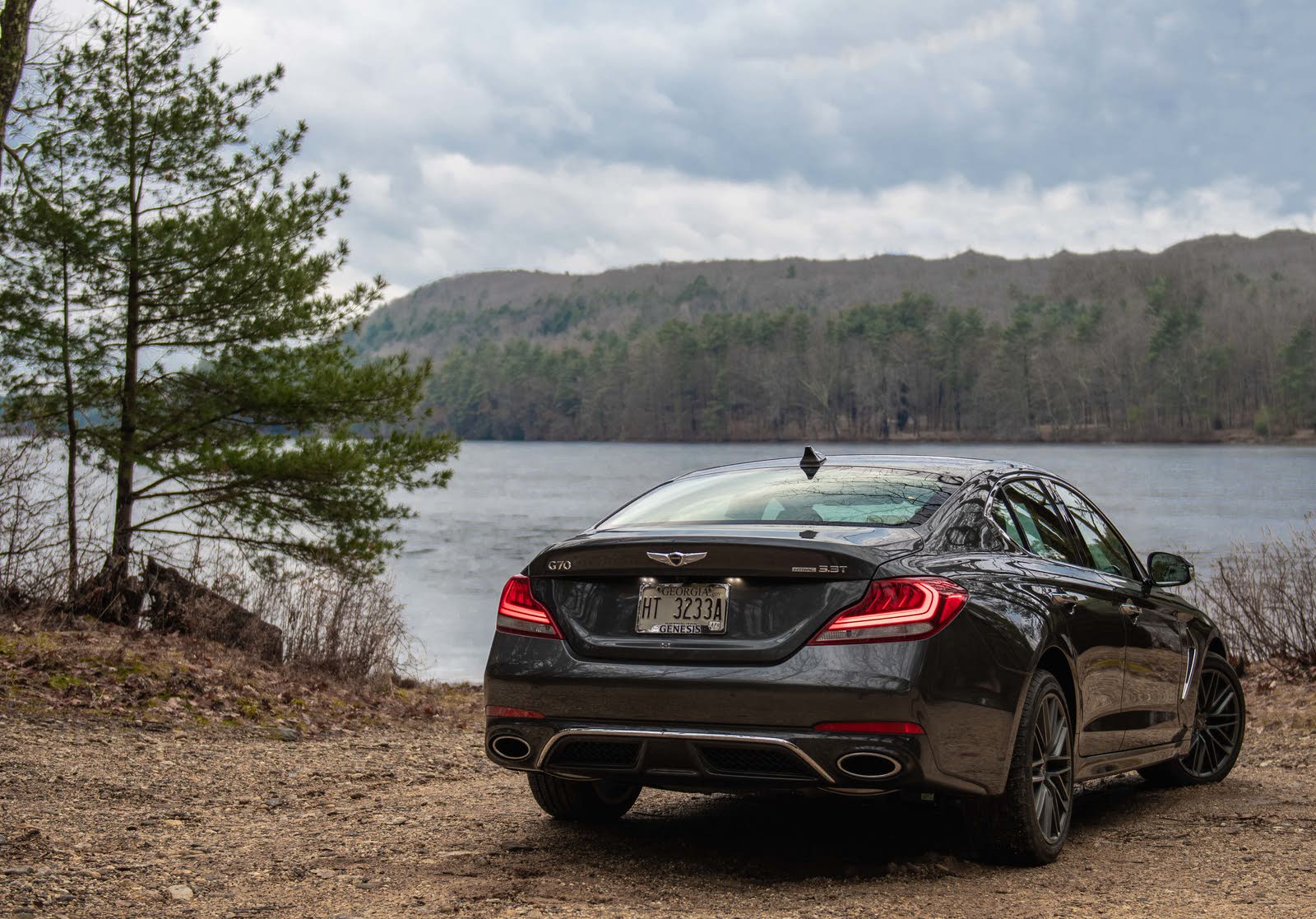 The 2019 G70 matches the exact starting price of a 2018 BMW 320i: $34,900. A V6 starts at $43,750. My fully loaded Prestige test car—with AWD, softer Nappa leather, heated rear seats, and more—rang in at $50,995 including destination. The V6 Sport trim, which includes some bronze-colored trim and adaptive dampers, is just over $52,000. A loaded Audi S4 or BMW 340i would cost another six to eight grand. Still, the G70 isn’t priced on the cheap, but you get a lot of car for your money. Genesis includes a 5-year/60,000-mile warranty, matched by only Jaguar in the luxury segment. It also includes 3 years or 36,000 miles of scheduled maintenance, by which you can summon a valet to pick up your car wherever you are, drop off a loaner, and return without setting foot in the dealership. Like Hyundai, Genesis warranties the powertrain for 10 years or 100,000 miles (but only for the first owner). These are perks, not concessions for mediocrity. The G70’s style, quality, and driving experience are that good.

GuruLF8R8 Currently own a G80 Elite enjoying the luxury. End of 3 year lease coming and looking to see what I have to give up to start the mileage over vs. purchase of my existing one.

How Do I Get Certified Genesis

What If I Have A Few Packages Included That Add $8,000 To The Model

How does the approx value for trade in calculated if there are $8,000 of added features/packages