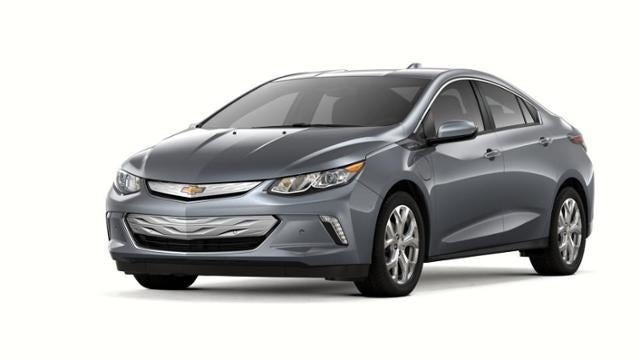 The Chevrolet Volt was the original plug-in hybrid, proving that the technology could be adapted to a mass-market family vehicle. Many other plug-in hybrids have hit the market since— most of them modified versions of ordinary gasoline vehicles—but the Volt has continued to buck that trend with a unique body shell. For 2019, the model sees a number of enhancements.

The current Volt has been on the market since 2016, part of a wave of other Chevrolet products that were introduced or redesigned that year. While those models all receive refreshes for 2019, the Volt’s styling is still so fresh that it doesn’t require one. The 2019 version features no major visual changes from the earlier years. The wedge-shaped hybrid manages to look like a conventional car, but its carefully-tailored creases and front fascia with silver mock-grilles make the Volt standout within the lineup. A new color has been added to the palette for 2019: Pacific Blue Metallic.

This is the case for the interior as well. Many of the basic components are borrowed from the Chevrolet parts bin, but they’re presented in an interesting way and feel premium. Thanks to the Volt’s rear liftgate, cargo capacity is higher than the average sedan. There are seats for five, but the middle rear position is best relegated to short trips, as those passengers will find themselves uncomfortably straddling a large tunnel for the Volt’s T-shaped battery. For 2019, buyers can choose a new Jet Black/Porcelain Blue interior color combination.

The technology stack looks a little different this year. The Volt gets the latest, third-generation of Chevrolet’s MyLink infotainment system, courtesy of a touch-enabled 8-inch LCD display. As before, both Apple CarPlay and Android Auto functionality are included free of charge. New for 2019, the Volt’s Energy App displays how driving style, weather, route, and climate controls will affect the driver’s range, offering an estimated mileage rather than a score like the previous version.

Volt is still offered in LT and Premier grades. The LT trim comes standard with 17-inch 5-spoke painted wheels, an 8-inch color LCD instrument panel, keyless access and start, remote start, patterned cloth seats, and automatic climate control. It can be optioned with heated seats, leather upholstery, a wireless charging pad, and a heated steering wheel. For 2019, a power driver’s seat is also an option. The Premier gets all of these features standard plus premium 17-inch wheels. Navigation is a standalone option. There is also a Blackout package with black Chevrolet bowties front and rear, unique machined 17-inch alloy wheels, and aluminum sport pedals.

All Volts are powered by a 1.5-liter inline 4-cylinder engine and electric motor, for 149 horsepower and 294 pound-feet of torque, combined with an 18.4-kilowatt-hour battery. This drives the front wheels via a continuously-variable automatic transmission (CVT). Though official consumption and range figures have not yet been released for 2019, they should remain in line with the 2018 numbers: 106 MPGe combined on electric power only or 42 miles per gallon otherwise—plus an all-electric range of 53 miles and a total range of 420 miles.

For 2019, Chevrolet has made some drivetrain improvements. There are new Low and Regen On Demand modes that activate increased regenerative braking efforts as soon as a driver lets off of the gas pedal. And, a new 7.2-kW onboard charger is capable of charging the Volt in as little as 2.3 hours on a 220-volt connection. This system is standard on Premier and optional on LT, which comes with a smaller 3.6-kW onboard charger as standard equipment.

Safety is a primary target for the Volt, so 2019 sees improvements. While an analog reversing camera was always standard, it’s been upgraded to digital this year to increase clarity. There’s also a new tire-fill alert that chirps the horn when the tired has been filled to the optimal pressure level. Chevrolet has even improved the low-speed audio warning system that alerts pedestrians to the Volt’s otherwise-silent presence by adding rear speakers. Both trims offer the Driver Confidence package that includes rear cross-traffic alert and blind-spot monitoring. Driver Confidence II, for Premier only, offers automatic high beams, a following distance indicator, forward collision warning, lane-keep assist, and, for 2019, adaptive cruise control.

This year’s Chevrolet Volt isn’t a major departure from last year’s model. The model already has a magic combination of functionality, style, and fuel efficiency. That said, Chevrolet made improvements in all the right areas to the 2019 version. The extra technology and optional faster charger make the Volt appealing to new customers while retaining existing ones.

What's your take on the 2019 Chevrolet Volt?

Have you driven a 2019 Chevrolet Volt?
Rank This Car

How Can I Search Cargurus For 2019 Volt With 7.2 Charger Option

this is not a listed option box