After last year’s redesign, the Equinox returns with new HD rear-view and surround-view cameras, an updated infotainment system, and a bit of a package shuffle. 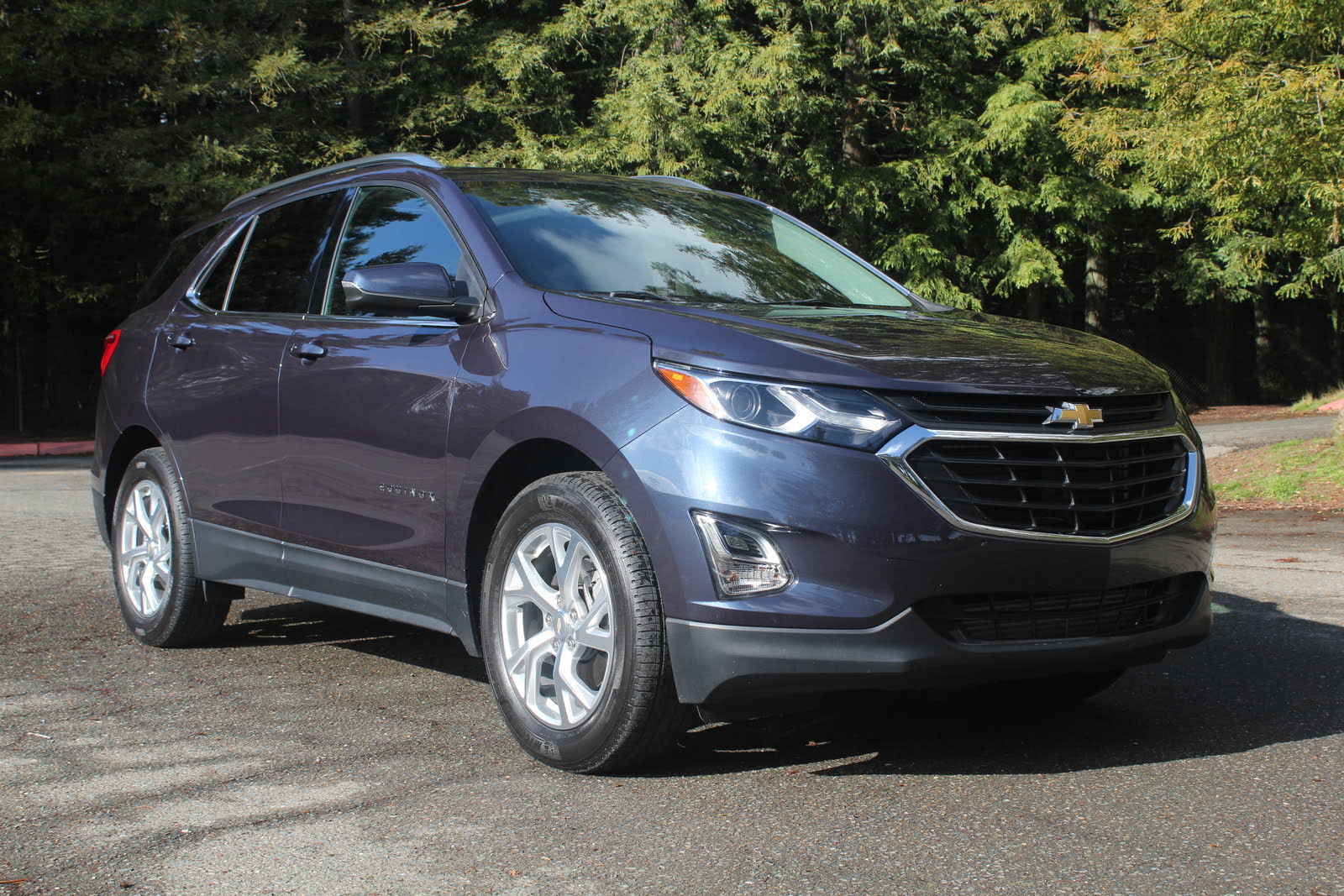 The 2019 model year sees the Equinox gain some clarity in the form of HD rear-view and surround-view cameras. Those are important upgrades in a vehicle that does not offer great visibility, and with a new infotainment system and a newly available Lights and Bright package making LED lights and chrome wheels an option for the LT trim, the Equinox is better than ever. But it’s still missing a lot, leaving it as an also-ran among its competition. 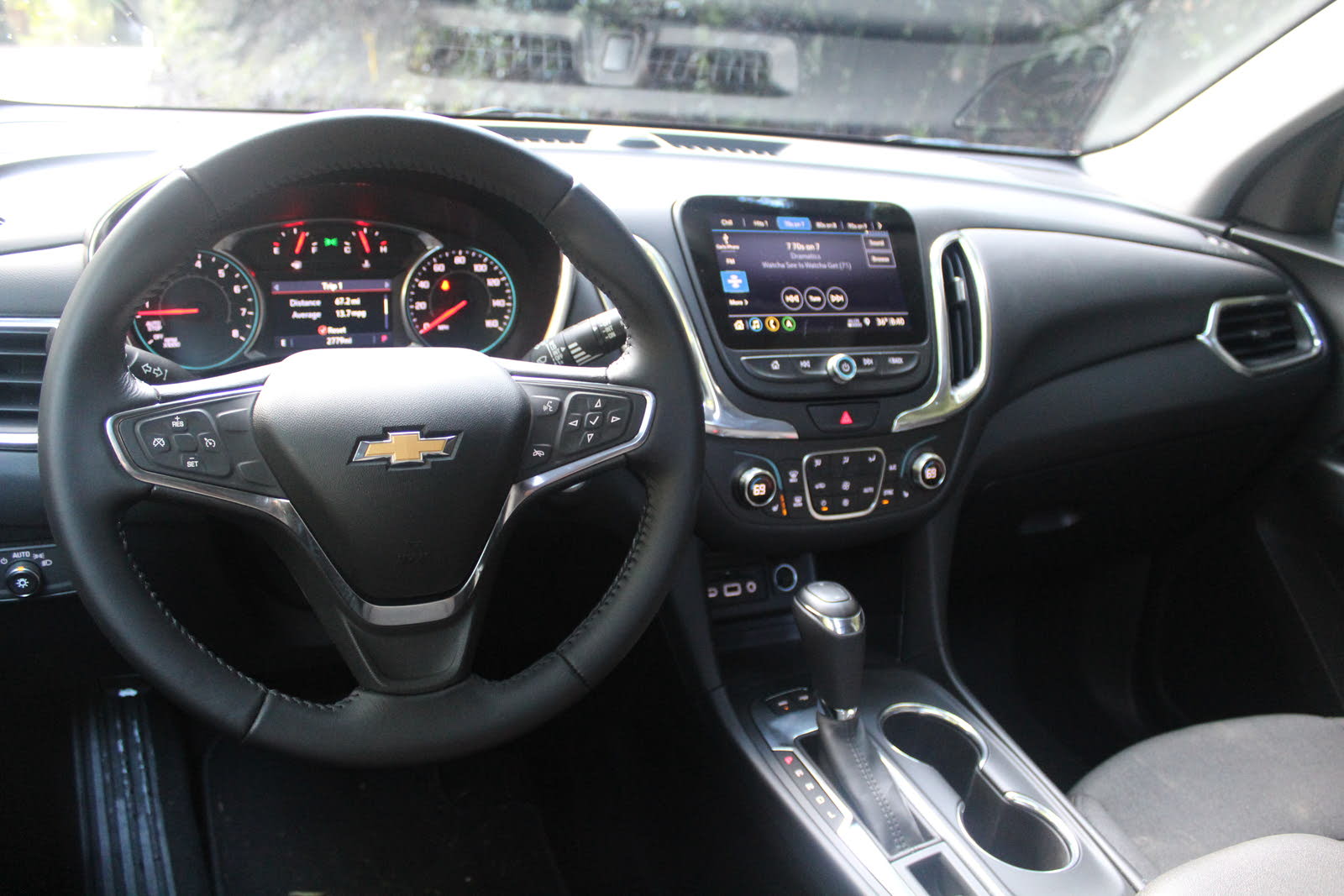 Things have tightened up inside the Equinox since last year’s redesign, and with a cargo capacity rating of just 29.9 cubic feet, things aren’t much better behind the rear seat. Cramped quarters are a major issue to overcome in a very crowded field, but Chevy has been attempting to make hay by touting the Equinox's very low starting price of just $23,800. The problem is that the base L trim you get for that price isn’t actually available on dealer lots—it’s special order only, and more than that, it doesn’t come with a spare tire, a compass, or any paint options other than white or silver. Effectively, that means the LS is the real starting trim, and for the extra $2,100 you’ll spend, all you’ll get is that spare and compass back, plus some additional paint options and the privilege to add more features.

Even worse, that list basically starts and ends with a power driver’s seat, tinted rear windows, and some additional cosmetic enhancements. Chevy wants to boast some of the advanced safety features available with the Equinox—like adaptive cruise, a forward-collision warning system, and that new HD surround-view camera—but these features aren’t available here. In fact, those aren’t available until you get to the top-tier Premier trim, which means you’ll be spending around $33,000, depending on the options you choose.

But there’s still a lot to praise about the Equinox, with front-wheel drive (FWD) and all-wheel drive (AWD) options, as well as three engines (including a diesel). For my week with the Equinox, I was handed an LT trim with AWD and the more powerful 2.0-liter turbocharged gas engine. The starting MSRP of $31,400 was inflated by a $2,240 Sun and Navigation package that added a power sunroof, 120-volt outlet, HD rear-view camera, two extra USB ports, and an 8-inch touchscreen with the new infotainment system and navigation. A Confidence and Convenience package for $1,945 added a leather-wrapped shift lever and steering wheel, a power rear liftgate, remote vehicle start, heated front seats, dual-zone auto climate control, lane-change assist with blind-spot monitoring and rear cross-traffic alert, rear park assist, and heated power mirrors. With a $995 destination charge, the total price came to $36,580.

The Equinox comes with your choice of three engines. A 1.5-liter turbocharged 4-cylinder powers the L and LS trims and offers 170 horsepower and 203 lb-ft of torque. Mated to a 6-speed automatic transmission, it’s rated by the EPA to return 26 mpg city and 32 highway with FWD. Those are pretty good fuel-economy numbers, but the 1.5-liter is notoriously underpowered, especially if you fill your Equinox with cargo or passengers, which will make those miles per gallon numbers drop significantly. Once you move up to the LT trim (which is really where you should begin, given the restrictions of the L and LS trims), you’ll have access to the 1.6-liter turbodiesel and the 2.0-liter turbocharged options.

The turbodiesel is a nice little powerplant, with 240 lb-ft of torque giving it plenty of grunt. But for the $2,500 you’ll have to pay to get it, you’re giving up nearly all towing capacity. More than that, I didn’t meet its impressive fuel-economy claims of 28 mpg city and 39 highway. Truly, the best option here is the 2.0-liter turbocharged engine, which delivers 252 hp and 260 lb-ft of torque. It has plenty of power and revs smoothly through the range, delivering its power through GM's relatively new 9-speed automatic. In AWD form, the EPA estimates 22 mpg city and 28 highway for a combined rating of 24, though I got closer to 20 during my week, thanks to my tendency to drive a little aggressively around town and through some very hilly areas. If your commute includes long stints on the highway, that 24 mpg combined figure should be easily attainable.

The big issue here is the transmission. Personally, I think 9 speeds are too many for a little engine like this, and the effect becomes clear at lower speeds, where the transmission switches around far too much for smooth driving. A heavier foot will mitigate a lot of this, but in stop-and-go traffic, it can get a little frustrating as it hunts around for the correct gear. A V6 would have been a better choice here. 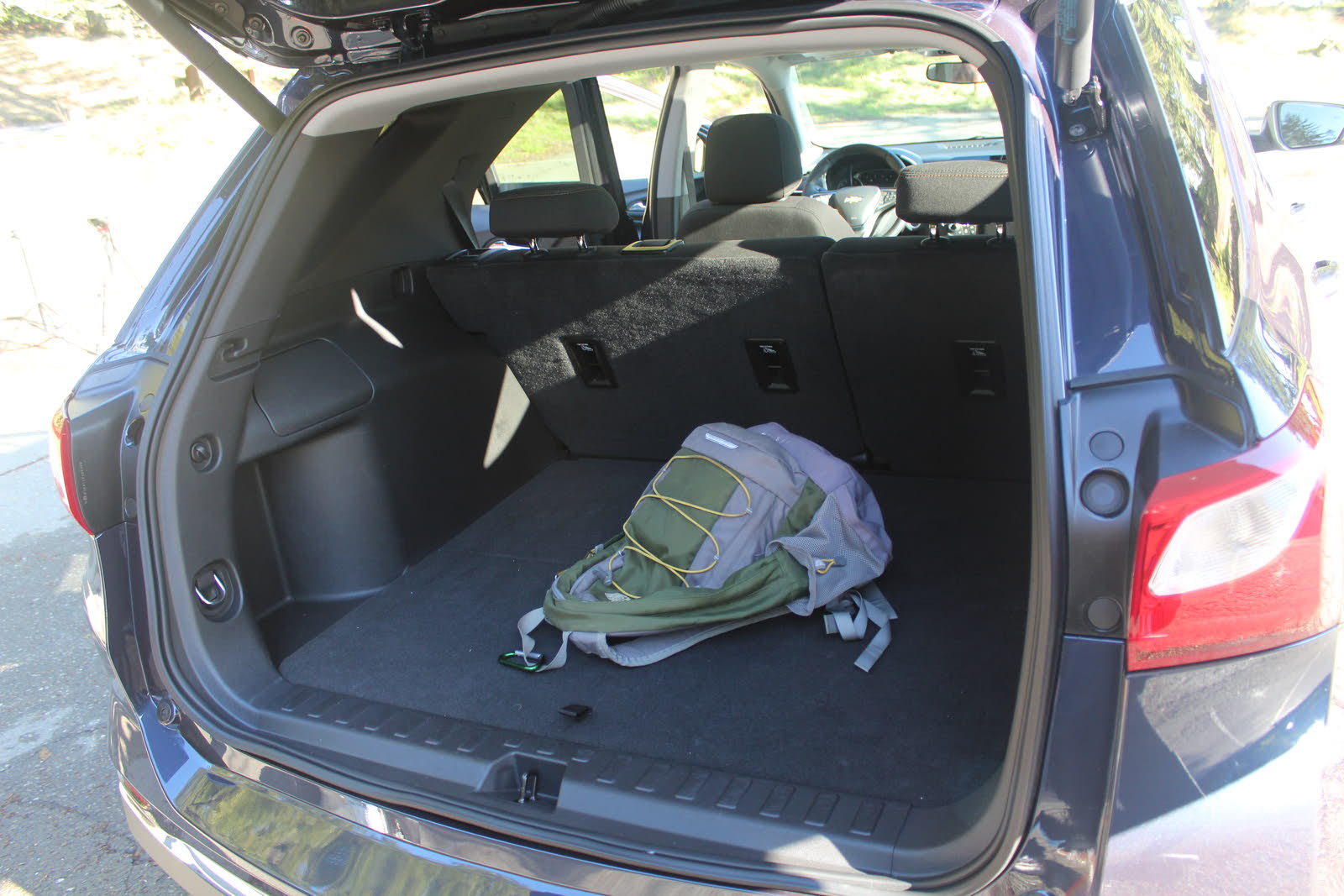 My main concern here is with the materials found inside the Equinox. At $23,800 I would have no complaints, but things start looking very cheap when you get into the higher trim levels, on which you can easily spend more than 40 grand. Particularly frustrating are the gaps visible between interior panels. That said, the cloth on the seats is a standout, and I’m very pleased to see General Motors using higher-quality material.

Even though things are tighter with the redesign, I still had plenty of room in the front and rear seats for my 6-foot, 4-inch frame. While the 29.9 cubic feet of space in the back and 63.5 total both fall behind the capacities of many of the Equinox's competitors, that’s still plenty of space for most people's needs. 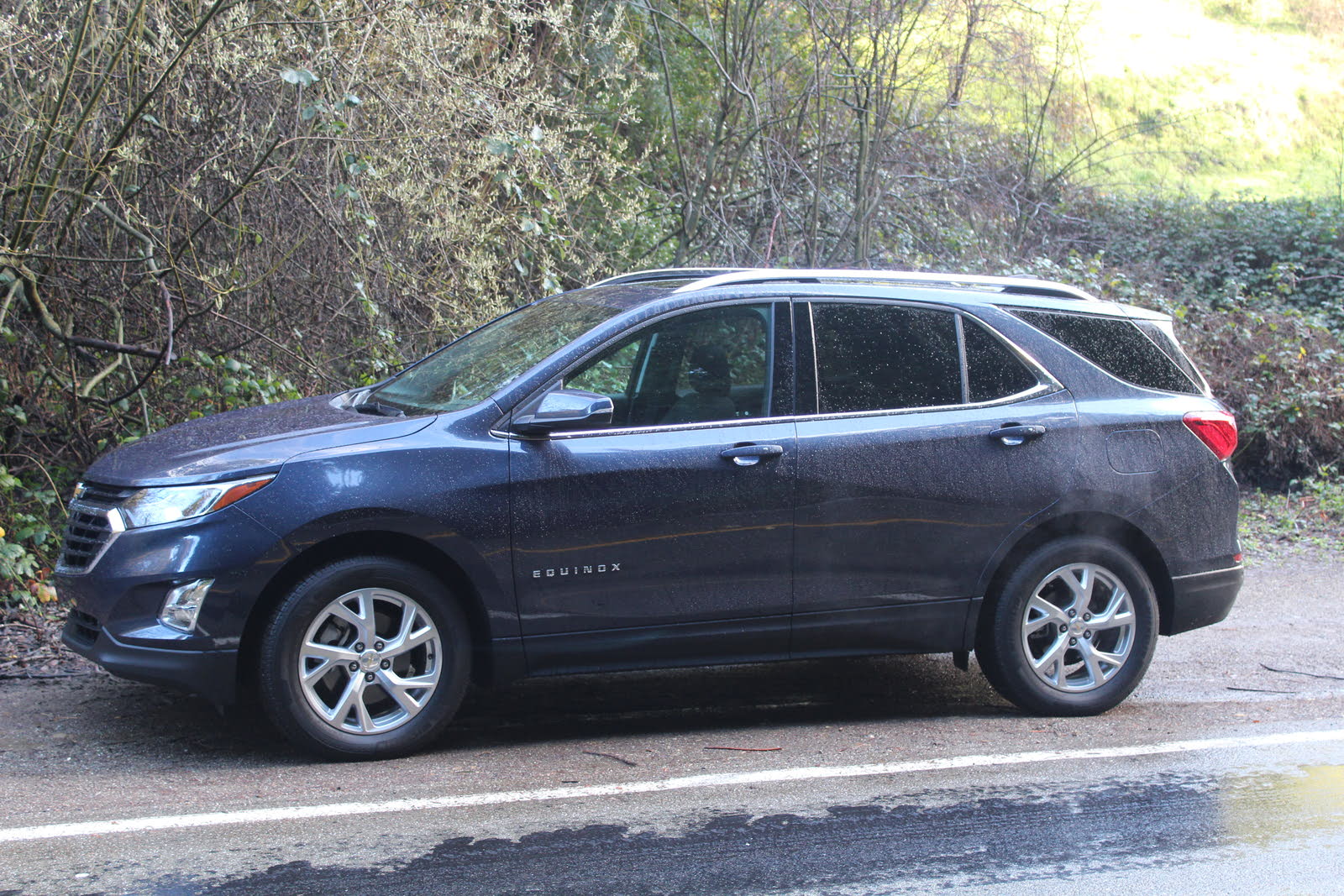 This is where the Equinox received the most attention for 2019. A new infotainment system, new HD options, and LEDs available for the LT trim are big upgrades. Although not the most responsive on the market, the new infotainment system is easy to read and understand, and you can use it with the familiarity of your own phone through standard Android Auto and Apple CarPlay. It’s a nice touchscreen, too, especially with the larger 8-inch upgrade, though the response to inputs (like pinch and zoom in the navigation) has too much lag for my liking. But it’s the new HD cameras you should really appreciate. Visibility was a pretty big sore spot with the old Equinox, so bravo to Chevy for the fix; they look great.

The Lights and Bright package now available for the LT trim makes LEDs available on what is essentially the base trim, and with the 120-volt outlet and 2 extra USB ports you get with the Sun and Navigation package, you’re set up for as much charging as you could ever need. But I don’t like that dual-zone auto climate control, heated front seats, and blind-spot monitoring are available only with the $1,945 Confidence and Convenience package. These features are quickly becoming standards in the segment, and sequestering them behind an expensive package that’s available only to mid-tier trims and up threatens to put Chevy in a very bad position very soon. 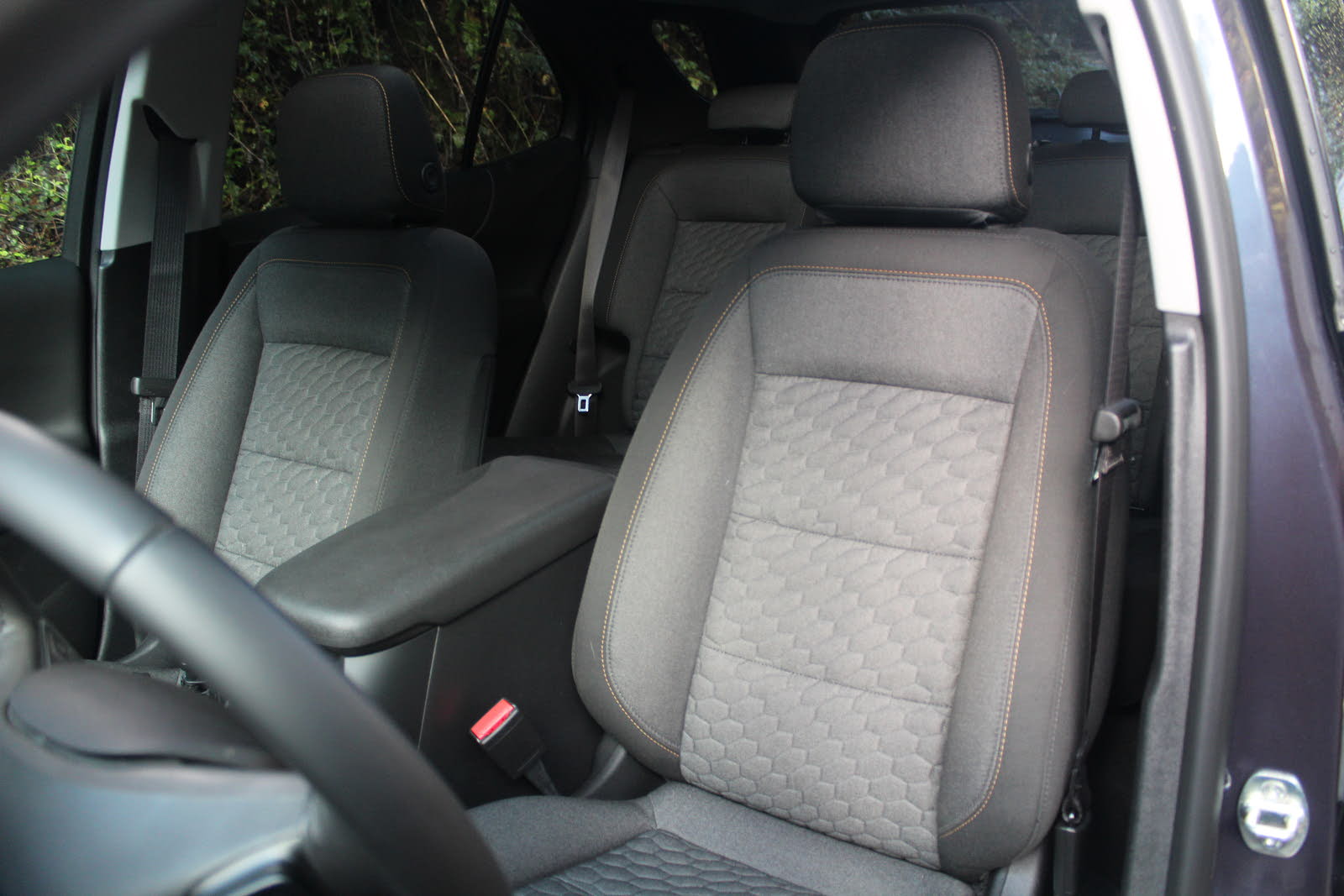 First, it must be noted that the Equinox does very well in both government and independent testing, scoring top marks in both sets of tests. The headlights hold it back a bit, with both the halogens from the lower trims and the HIDs of the uppers getting a Marginal rating from the Insurance Institute for Highway Safety (IIHS), but otherwise things are well sorted, and the Lights and Bright package now available to the LT takes care of the issue with LEDs front and back.

However, simple features like blind-spot monitoring aren’t standard until the top-tier Premier trim, and they're only optional on the LT. Worse than that, advanced safety features like adaptive cruise and pedestrian detection with auto braking are available as an expensive package on only the two top trims. Comparatively, you can get into a Forester or a RAV4 with standard advanced safety features that outclass the Equinox's optional ones. 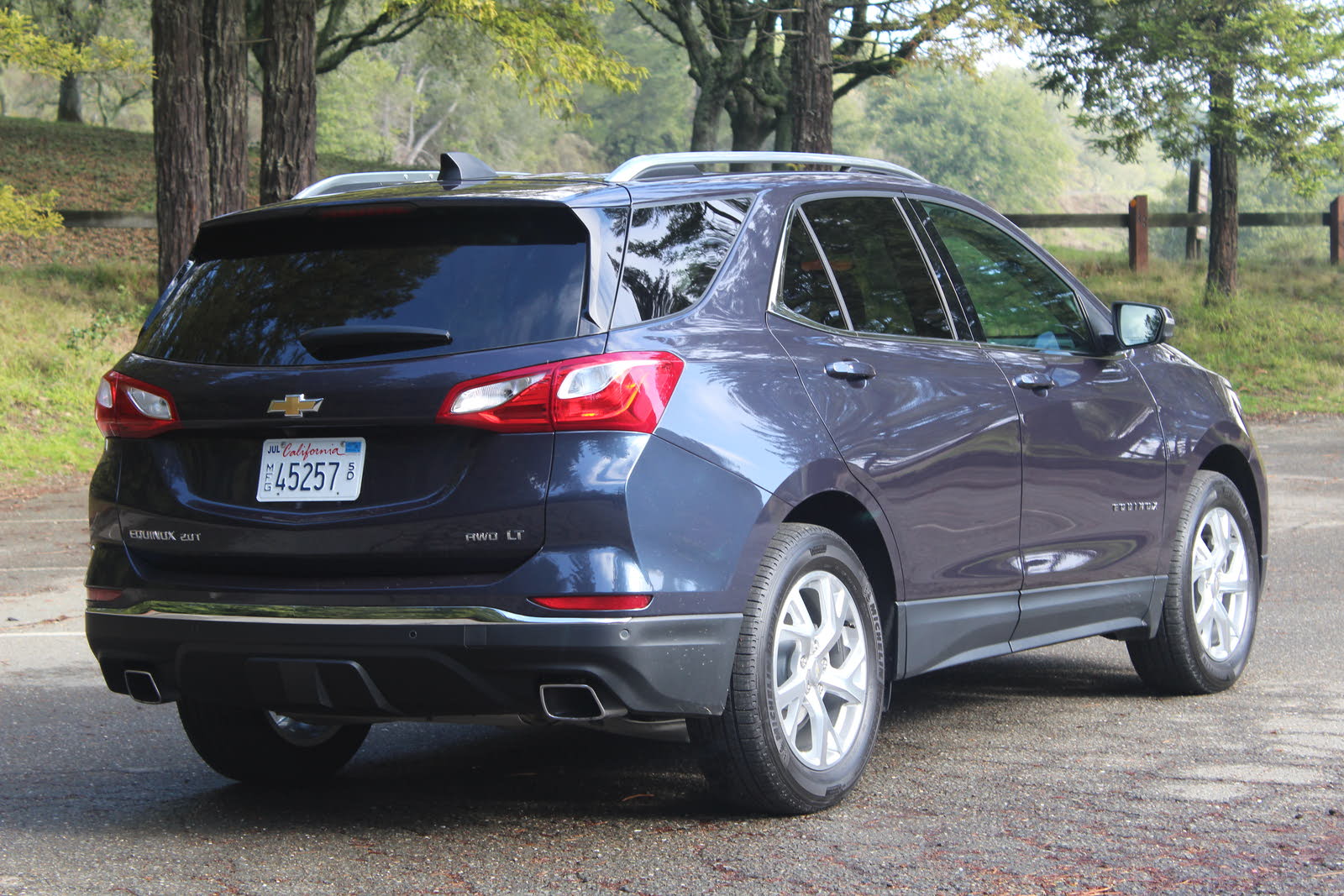 While $23,800 is quite tempting, you’ll likely be disappointed with anything less than the LT trim, meaning your starting price is at least $28,395. And if you want access to advanced safety systems, you’re looking at around $33,000. That’s still a good deal, but when some of the competition offers these systems as standard, it’s hard to overlook them as a more cost-effective option, especially in a family-focused segment like this. That said, as of this writing, if you’re coming from a non-GM brand, Chevy is offering up to a $1,500 incentive on purchases and leases to get you to switch, and leasees can see up to $2,650 in Incremental Capitalized Cost Reduction Bonus Cash.

What's your take on the 2019 Chevrolet Equinox?

GuruBGYVV Can you get heated seats as an option? Power seats, Uconnect for phones

Users ranked 2019 Chevrolet Equinox against other cars which they drove/owned. Each ranking was based on 9 categories. Here is the summary of top rankings.

Have you driven a 2019 Chevrolet Equinox?
Rank This Car

I Just Got Brand New 2019 Chevy Equinox Last Week Now Engine Light Is On An...

I Would Trade My Current Lease For A New Acura

Pushed start button , all guages dashboard audio, lights all came on but engine would not crank over. Next day it was fine. Dealership thought it was a fluke. Next day, same problem! Thoughts?

I bought a new Equinox in January and there is a very strong wind noise at highway speed. I checked all windows and the sun roof. Everything is buttoned up tight. Is this common and can it be fixed?...