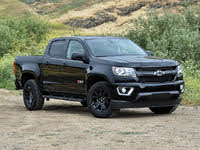 The 2019 Chevrolet Colorado attempts to hold its own against newer competitors by offering simple, no-nonsense design and special towing and off-roading capabilities. 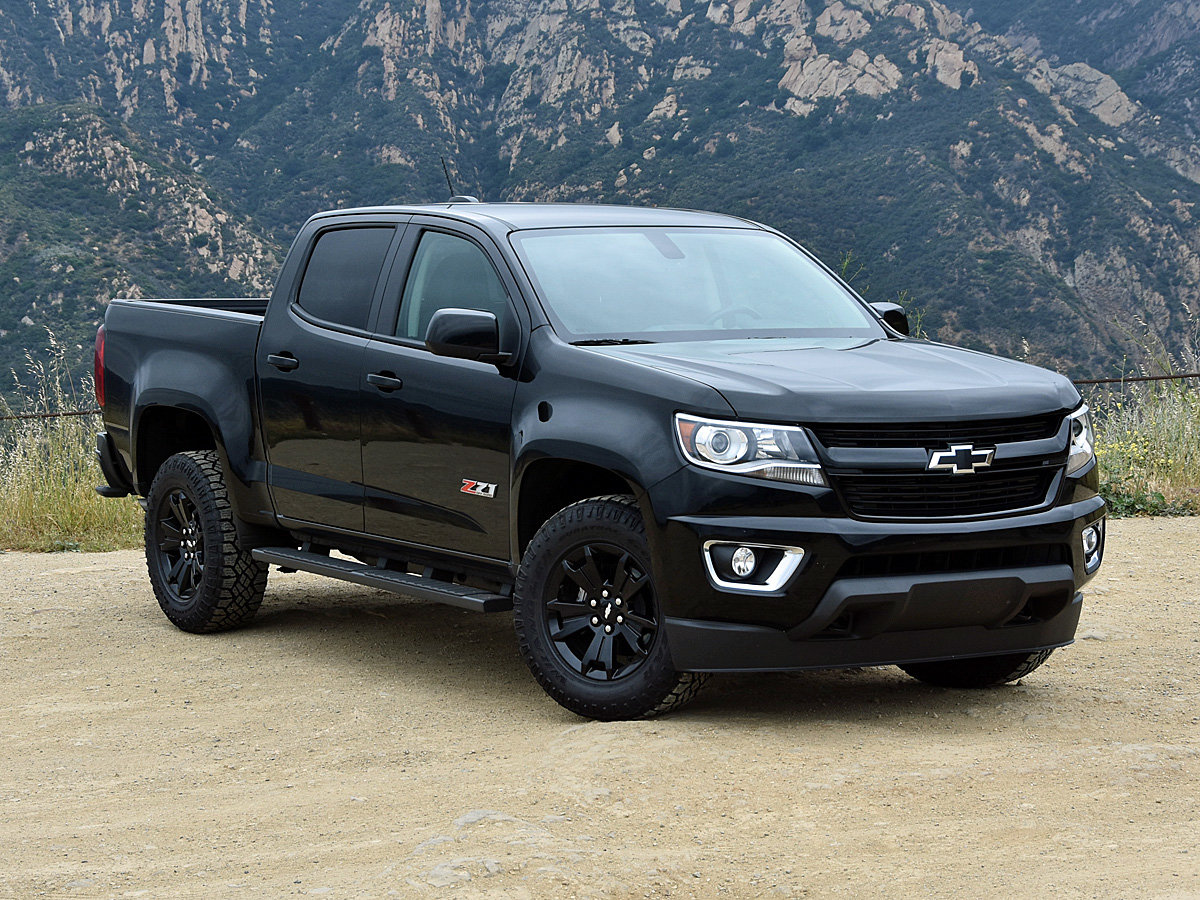 Since the midsize Chevy Colorado returned for the 2015 model year, every one of its competitors except the Nissan Frontier has been redesigned. Normally, that would spell doom for a vehicle. However, thanks to its available diesel engine, off-road-tuned ZR2 trim, and a commitment to simplicity and sensibility, the Colorado remains selectively competitive amid an increasingly crowded field. 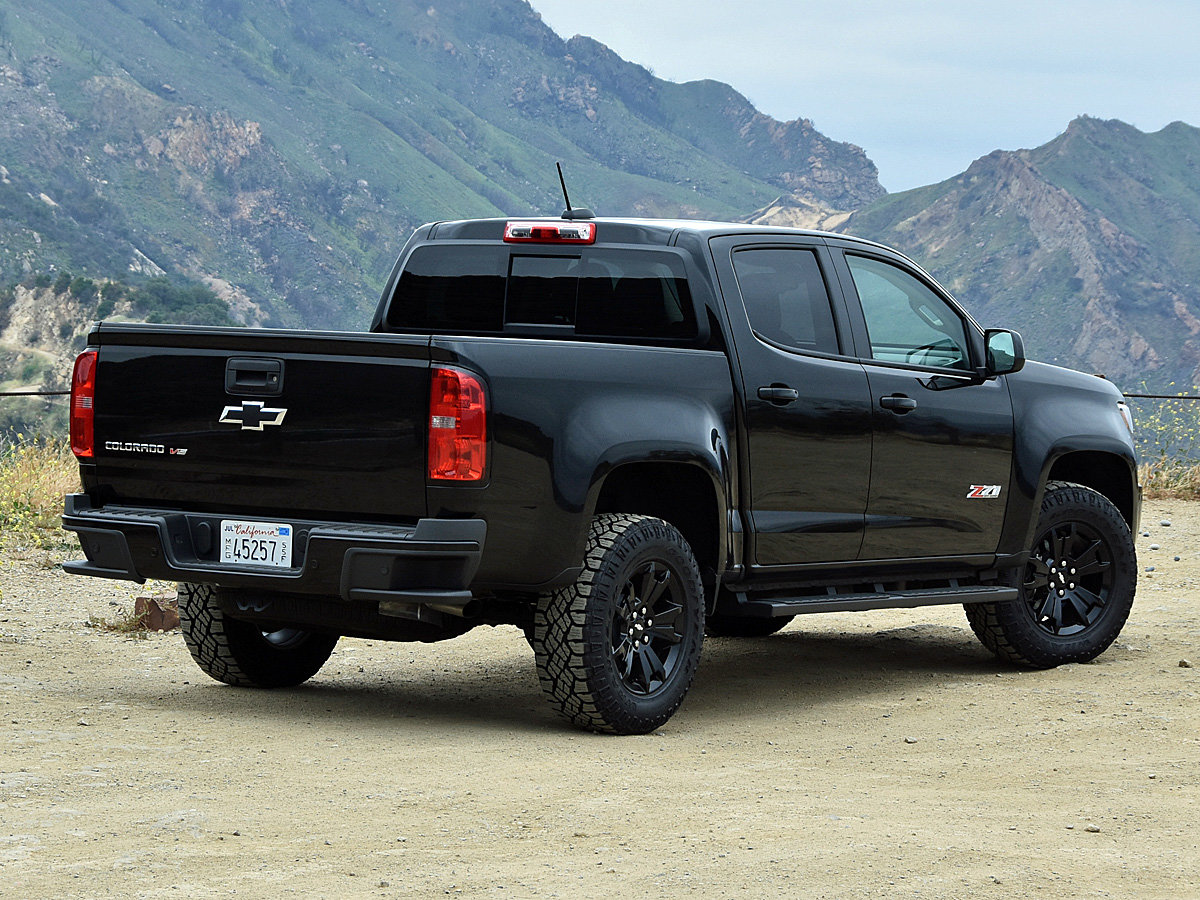 Black on black on black isn’t my thing, but when you order a 2019 Chevy Colorado Z71 with the Midnight Edition option package, that’s what you’re getting: a truck that's impossible to keep clean for longer than 5 minutes.

There are other versions of the Colorado, of course. You can get a bare-bones-basic extended cab with rear-wheel drive (RWD) and a 4-cylinder engine for just $22,395 (including Chevrolet's $1,095 destination charge). Or you can get a loaded ZR2 crew cab with 4-wheel drive (4WD) and the rugged Bison Package, spending upward of $52,000. In between these extremes you’ll find numerous Colorado trims designed for just about any budget or purpose.

My triple-black, 4WD Colorado Z71 crew cab split the difference between the Base and ZR2 Bison, starting at $37,000 even. With the Midnight Edition treatment and side-step running boards, it came to $41,765.

Generally speaking, I like how the Colorado looks. It wears a clean and balanced design without resorting to exaggerated cues unless you get the rugged ZR2. But on that version of the truck, the styling changes are as much about function as they are about form.

Inside, the simplicity continues with basic materials and an organized, symmetrical control layout designed for work and play. Easy to clean, the Colorado’s cabin emphasizes practicality over style. With each job-site visit or outdoor adventure, however, the plastic panels dominating the cabin will scuff and scratch, making them look even cheaper than they already do.

As a part of the Midnight Edition Package, the Colorado Z71 gets aggressive 265/65R17 Goodyear Wrangler Duratrac maximum traction tires, adding a sense of purpose to the truck’s appearance. If you want the tires but don’t want the Midnight treatment, try the Colorado Trail Runner Special Edition, which also gets a cool, block-letter CHEVROLET grille, skid plates, and rocker panel protection, among other upgrades. 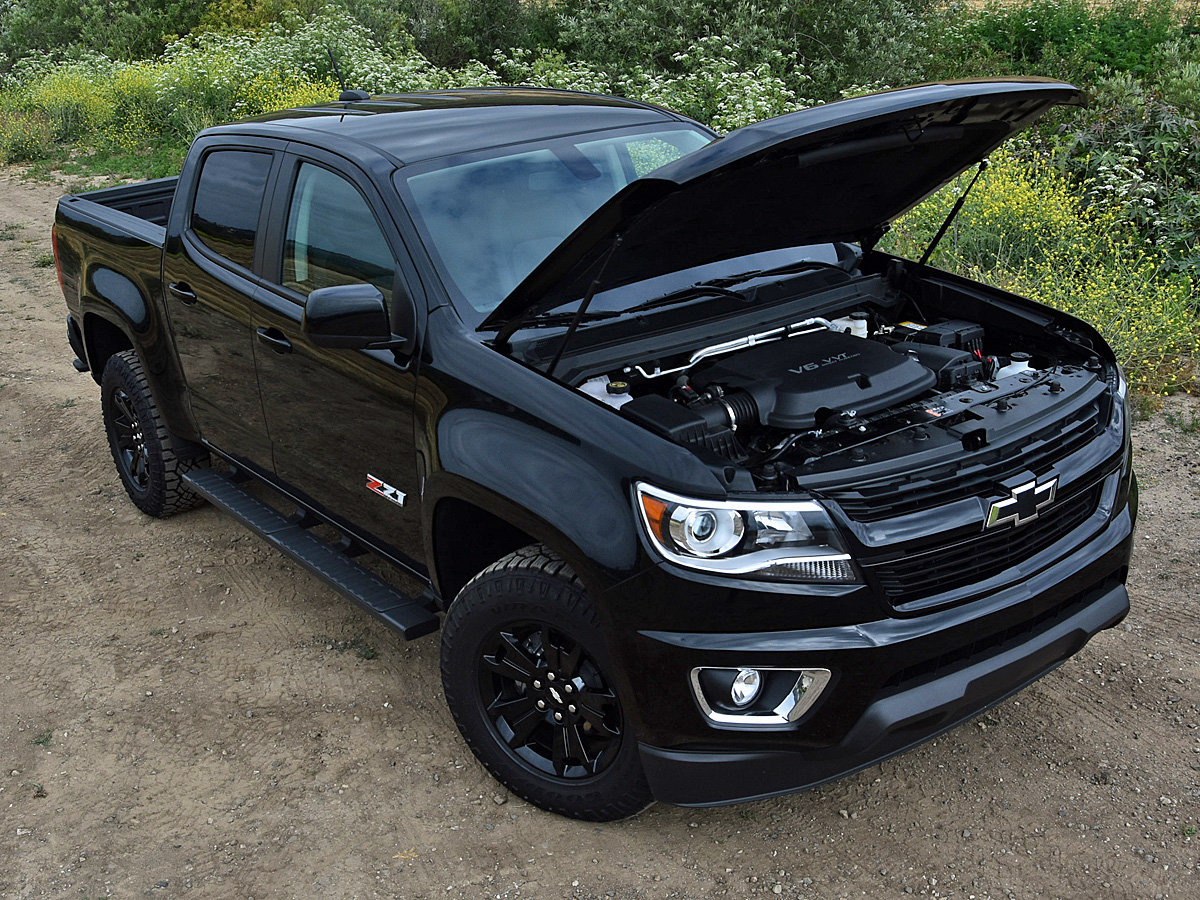 Depending on the Colorado's trim, you'll be greeted by one of three engine choices.

The maximum tow rating for this truck is 7,700 pounds. However, you’ll need the turbo-diesel engine for that. The more common V6 engine can handle up to 7,000 pounds of trailer when the truck is properly equipped. Choose the right cab style, bed size, and drivetrain, and maximum payload measures 1,557 pounds.

Even though the Colorado Z71 comes equipped with off-road suspension tuning, 4-wheel drive is not standard. My test truck had Chevy’s Autotrac system, which offers RWD, Automatic 4WD, 4-Hi, and 4-Lo, each accessible by twisting a knob on the left side of the dashboard. These components, combined with hill descent control, the Goodyear Duratrac tires, and the short cargo bed, made the Z71 a capable performer off the pavement.

Unfortunately, the Z71 retains the deep chin spoiler found on all but the ZR2 versions of the truck, and the optional side-step rails potentially hurt the truck's breakover angle. If you’re expecting to tackle serious trails, get the Colorado ZR2.

On pavement, the V6 engine provides plenty of strength, but its reluctant throttle response forces the driver to take deliberate action when accelerating or reversing from a stop. This trait, combined with heavy and numb steering, makes the Colorado feel sluggish from behind the wheel.

Once the truck is up and running, however, these sensations fade. Acceleration is strong, the 8-speed automatic transmission performs flawlessly, and the steering offers resolute on-center stability. As far as fuel economy goes, I averaged 18.6 mpg on my testing loop, coming close enough to call the EPA's rating of 19 mpg accurate.

As you might expect, my test vehicle’s Z71 suspension tuning made this pickup feel like a children’s bouncy house on all but the smoothest roads, and the meaty Goodyears whirred loudly on the freeway. In town, the Colorado pummels crumbling infrastructure into submission, but bigger mid-corner bumps taken with some speed can make the truck’s rear end dance.

On twisty mountain roads, the Z71 handled better than I expected. It's easy to overdrive the Duratrac tires, and the steering is fairly slow, but the suspension holds body roll in check, and the brakes felt good underfoot. Better yet, they proved fade-free after miles of heavy use.

Based on my testing, the Colorado Z71 drives like a truck. And let’s face it—that’s a part of a pickup’s appeal, isn’t it? 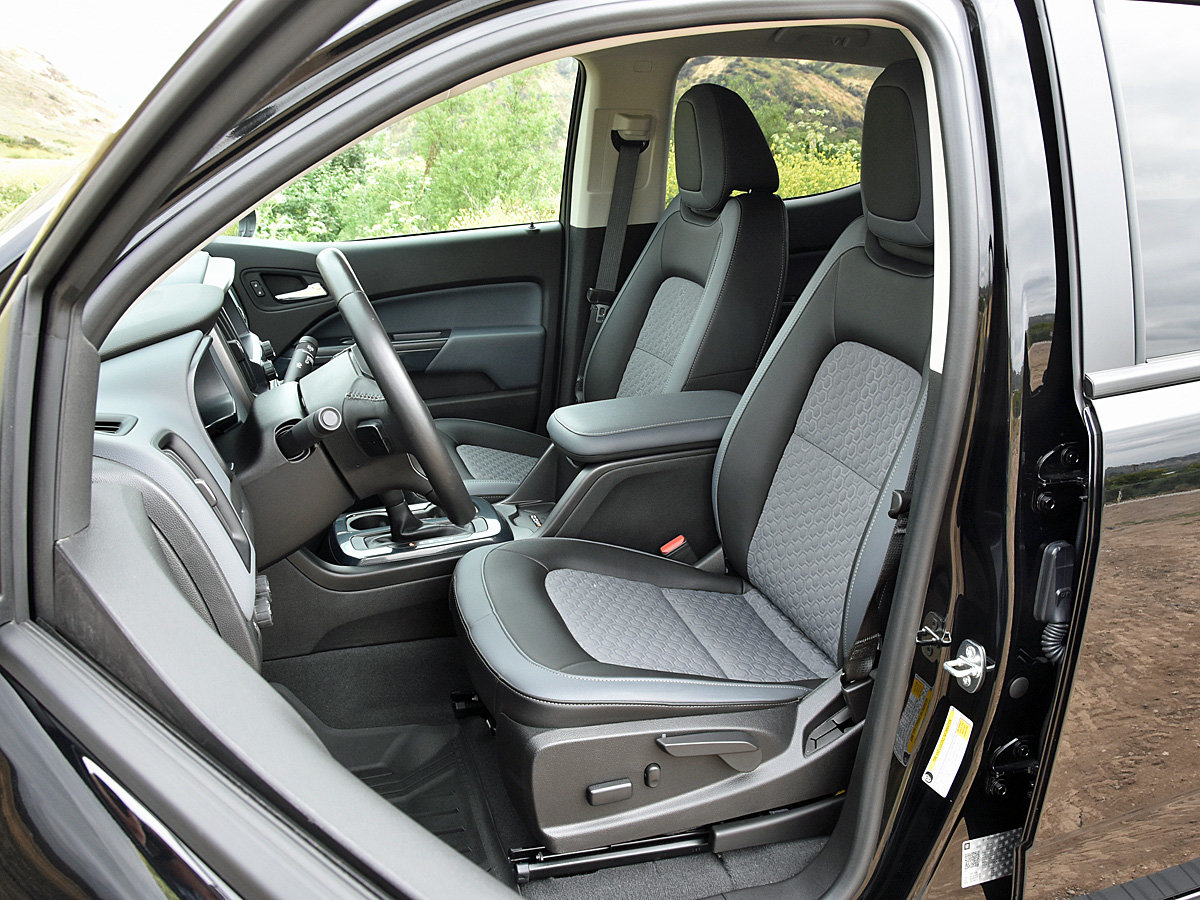 Form follows function within the no-nonsense Chevrolet Colorado. The controls are easy to find and use, there are storage spots everywhere, and this truck offers a commanding position behind the steering wheel.

Both front seats in my test truck included power adjustment for seat height and lumbar support, making it easy to get comfortable. The leatherette upholstery with cloth inserts feels durable, and the seat cushions are firm but supportive. The leather-wrapped, fat-rimmed steering wheel is nice to grip.

The Colorado’s rear bench seat is cramped, but that’s true of most midsize trucks. Softly padded front seatbacks help, and Chevrolet provides cup holders, USB charging ports, and a power outlet to help make the back seat more agreeable. What passengers would most likely appreciate, however, are air conditioning vents. Their absence is particularly noticeable on a hot day.

Pickups are all about utility, and the Colorado supplies handy corner-step bumpers to make loading and unloading a little easier. My test truck included an appropriately named EZ Lift and Lower tailgate—just release it and let it slowly drop down on its own. A spray-in bed liner protected the short cargo box, and an overhead cargo light made it easier to tie down a load at dusk or after dark.

Unless you need to haul more than the Colorado’s maximum 1,557-pound payload rating, or you simply want some of the surprise-and-delight features available on the Honda Ridgeline, this Chevy should meet your utility requirements, especially if you browse the extensive accessories catalog for this truck. 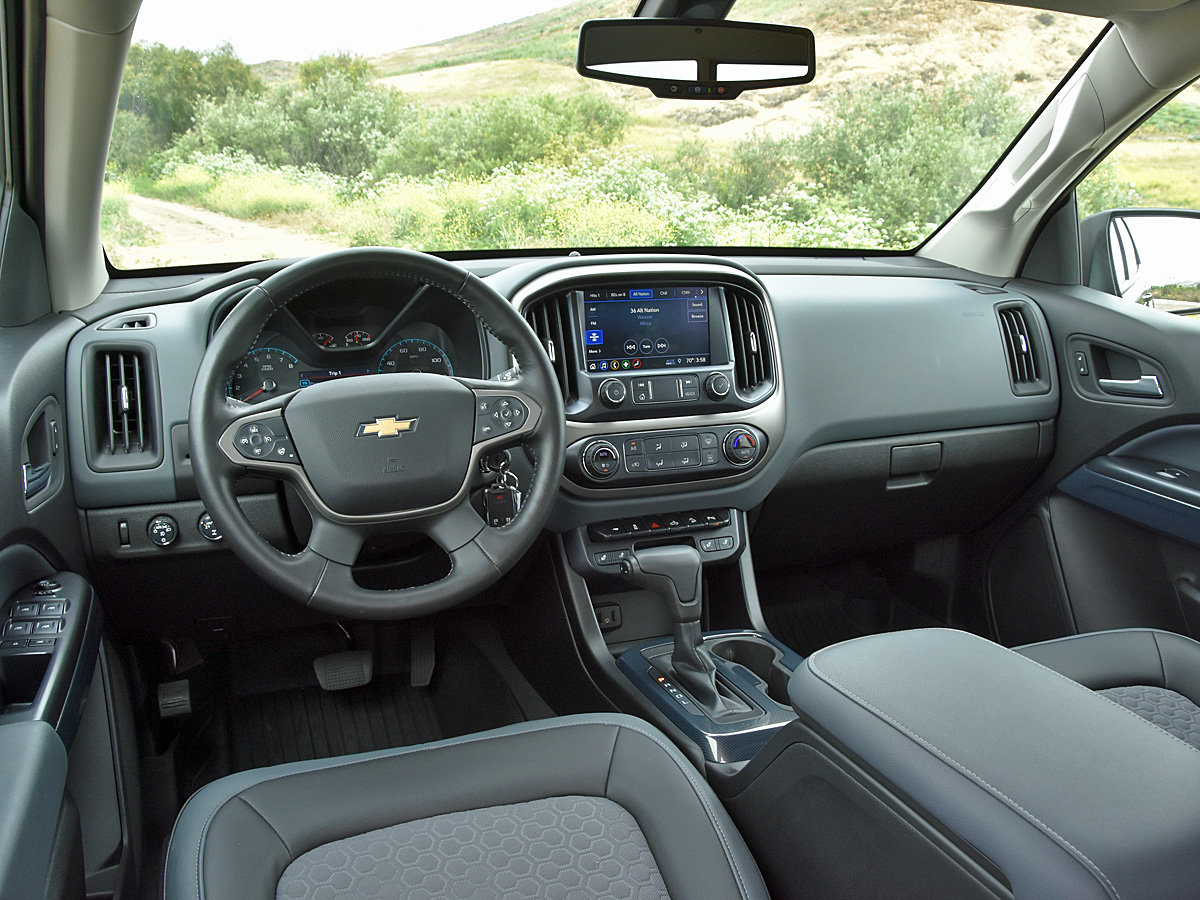 The Colorado is not a high-tech truck, and that’s just fine by me (and likely you as well).

You do not need to open an owner’s manual in order to understand how to use this vehicle. After all, the new-for-2019 Chevrolet Infotainment 3 touchscreen system is just as sophisticated—yet simple—as your iPhone or Android device.

Equipped with improved graphics and faster response, the new infotainment system is an improvement over the previous one. It includes a 7- or 8-inch display and comes with Bluetooth, Apple CarPlay and Android Auto smartphone integration, and voice recognition. The Colorado also supports OnStar subscription services, through which you can add a 4G LTE WiFi hotspot. Upgrades include a navigation system, a Bose premium sound system, and a wireless phone-charging pad.

The most frustrating thing about this system is how the tuning knob works. A normal tuning knob, if you twist it, moves up or down one station for each "click" of the knob. In some cases, you don’t even need to look away from the road. In the Colorado, however, twisting the tuning knob brings up a channel list, highlighting a station that is different from the one you’re currently listening to. Then you can move up or down from that point, pushing the button inside of the knob to select the desired station.

This is a terrible user experience. So set your favorite stations and then cycle through them using the handy buttons on the back of the steering-wheel spokes instead. You’ll save yourself plenty of distraction and aggravation. 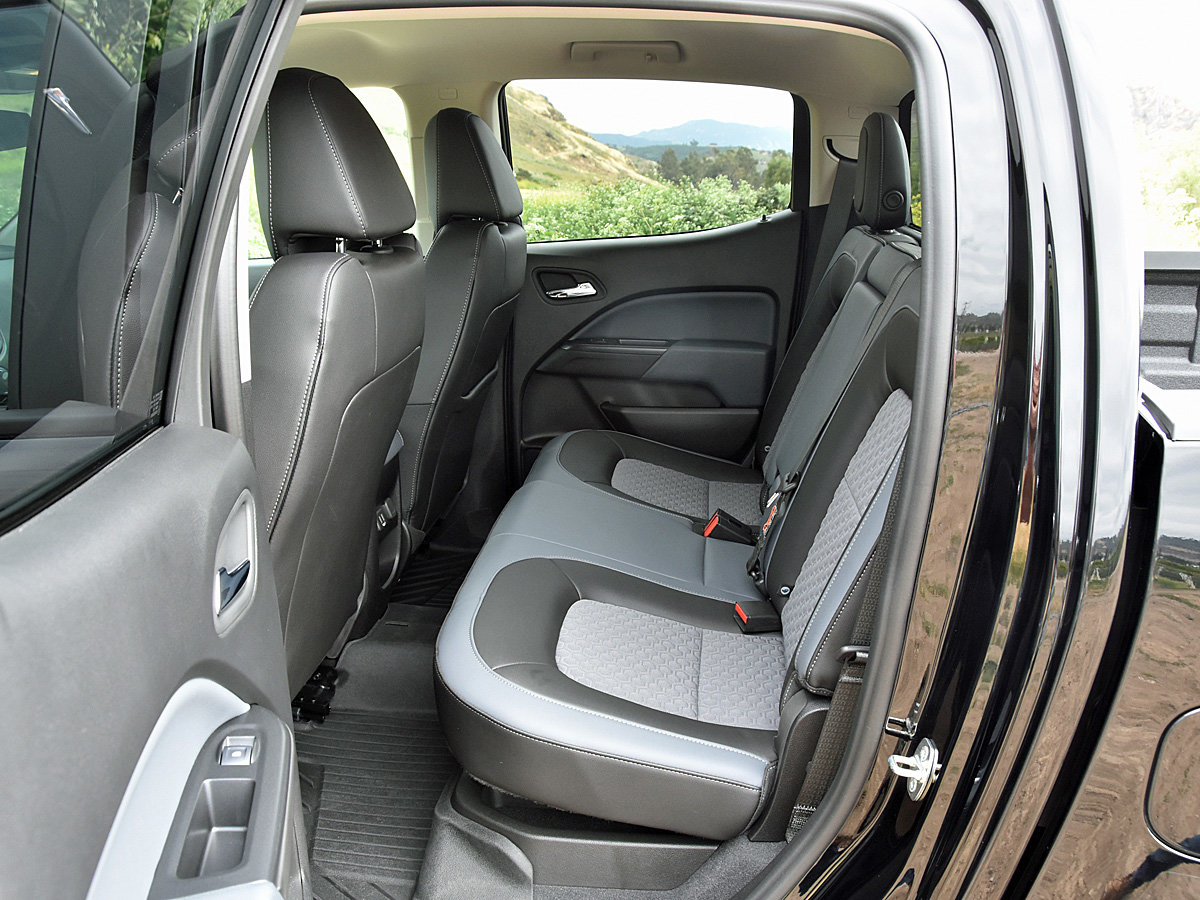 You won’t find many advanced safety technologies on the 2019 Colorado, either. Standard equipment includes a reversing camera and a Teen Driver monitoring system that spits out a driving report card to parents after a child has borrowed the truck. Crew cab versions also get a rear-seat reminder, which can prevent parents from accidentally leaving a child in the truck.

Only the Colorado LT can be optioned with forward-collision warning and lane-departure warning systems. If you subscribe to the OnStar Safety & Security plan, the truck includes automatic crash response, emergency services, and crisis assist in addition to quick access to roadside assistance.

If you’re not a fan of advanced driver-assistance systems, then you’ll love the Colorado. If you really want features like automatic emergency braking, blind-spot monitoring, rear cross-traffic alert, and lane-keeping assist, you’ll need to shop elsewhere.

According to the Insurance Institute for Highway Safety (IIHS), the Chevy Colorado has lousy headlights, hard-to-access child seat LATCH anchors, and it was awarded a Marginal score for front passenger safety in a small overlap, frontal-impact collision. This truck isn’t anywhere close to earning a Top Safety Pick rating from the organization.

In federal government crash testing, the Colorado earns a 4-star overall rating. Side-impact protection is excellent, and frontal impact protection is good. Unfortunately, whether you have RWD or 4WD, its rollover resistance rating is an unimpressive 3 stars. 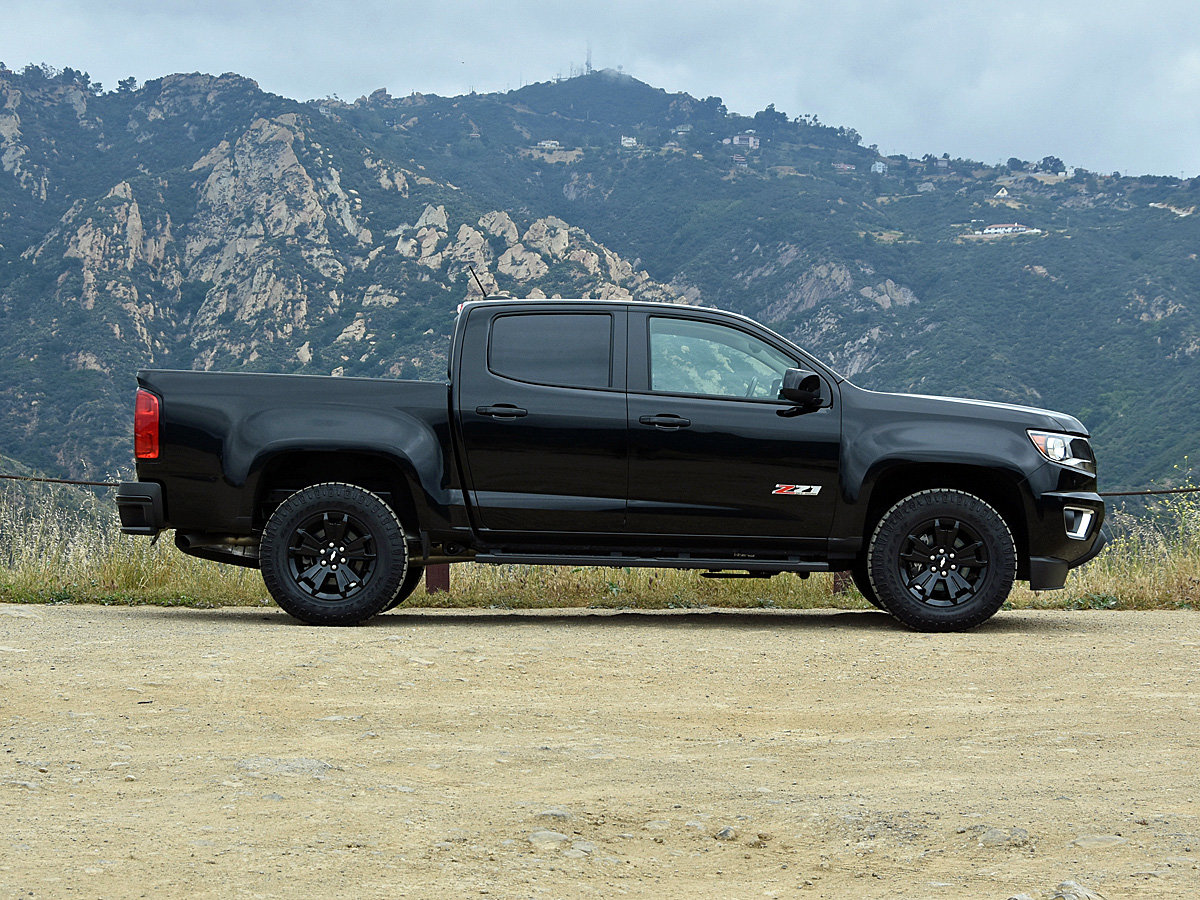 Given the Colorado’s age and simplicity, you’d think it would be among the most affordable midsize trucks on the market. Instead, when equipped to roughly similar specification, it costs more than a Honda Ridgeline, Nissan Frontier, and Toyota Tacoma. Ford’s all-new 2019 Ranger is in the same neighborhood as the Chevy. The Jeep Gladiator is more expensive.

Chevrolet consistently offers cash rebates, financing incentives, loyalty programs, and lease deals for this truck, so you’ll never pay sticker price. But these merely serve to make the Colorado’s price competitive, rather than a true bargain. Also, over the years, Chevrolet has pared back its free maintenance plan and free trial periods for OnStar, reducing perceived value in the process.

Unless you specifically want the turbo-diesel engine for its towing capacity, or the ZR2’s combination of off-road capability and styling, or a simple and basic truck that’s easy to live with, you should definitely cross-shop the Colorado with other midsize trucks.

The midsize pickup truck segment offers more options now than it has in the past decade. And with a rumored Ram Dakota in development, as well as a redesigned Nissan Frontier coming soon, Chevrolet could soon have the least-competitive midsize truck in America.

Unless you can’t live without that diesel engine.

What's your take on the 2019 Chevrolet Colorado?

GuruCJZ62 The Diesel is awesome. Power and economy!

ArkyBass 2019 has been great truck. V6 provides plenty of power. Goes from 65 to 90 like a rocket. Towing has be great, computer does some gear braking down hill. I have experienced a little(very little) odd shifting at low speeds but not concerned. Dropping down to mid-size truck with smaller cockpit is my biggest discontent.

Have you driven a 2019 Chevrolet Colorado?
Rank This Car

I want to list my truck but Guru only gives me the standard option choices. It does not give me my trim package, which I think would change the selling price.

2019 chevy colorado with new camper shell. I need to wire the cap brake light. What is the best way to do this given the use of one bulb in the taillight assembly for both turn signal and brake ligh...

My backup camera in my 2019 colorado z71 is not sharp and clear. I have dealer to show me other z71's and check camera and they were all very sharp and clear. He said mine had a different model ca...

400 views with 9 answers (last answer about a year ago)

how much horsepower does the air induction and catback exaust performance package add on the 3.6 colorado rst truck

68 views with no answers yet