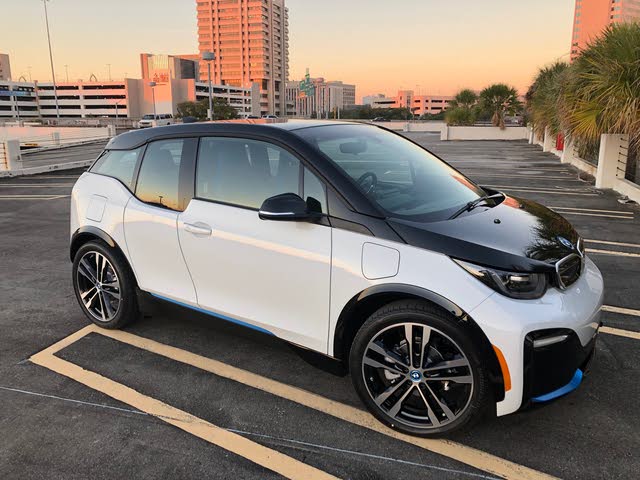 Now in its sixth model year, the BMW i3 electric hatchback is still as funky and futuristic as ever. For 2019, an upgraded battery extends the range by 30 percent and a Range Extender trim features a 2-cylinder motorcycle engine that acts as a generator to charge the batteries, making longer trips possible. New available paint colors are also available as well as options like wireless device charging, automatic high-beam headlights, and a WiFi hotspot. The i3 is available in standard base trim or the slightly better equipped i3s.

The inside of the i3, even several years after its introduction, remains a novel and forward-thinking space. BMW makes heavy use of recycled materials, including on the seats and some of the trim. BMW’s iDrive infotainment system is centered on a 10.2-inch screen in the dash. Drivers can access the rear seats via small rear-hinged, pickup-style doors.

Rather than trims, BMW offers the i3 in “worlds” that each have a loose theme for the interior. The Deka version has dark cloth seats, a navigation system, heated front seats, automatic climate control, and a universal garage-door opener. The Mega version adds lighter cloth and synthetic leather seats, while the Giga version has a leather-covered dash and open-pore eucalyptus wood trim. Finally, the Tera version gets genuine leather upholstery and special alloy wheels. A Technology and Driving Assistant package adds several active safety features, plus a navigation system and extra features for the infotainment system like stock updates, weather, and Google search capability.

The BMW i3 hasn’t been fully crash tested and doesn’t come standard with the kind of active safety features common across the rest of the market. The optional Technology and Driving Assistant package adds adaptive cruise control and pedestrian warning with automatic emergency braking, and both automatic parking and parking sensors are available options.

The i3 was one of the first mass-produced EVs on the American market and it’s still a futuristic automobile that draws glances wherever it goes, but it’s not alone. A Nissan Leaf has similar capability, but comes at a much lower price, and both the Chevrolet Bolt and the Tesla Model 3 have the i3 beat for range. The i3 has charming quirkiness and its available gasoline-powered Range Extender feature to make longer trips in an EV possible.