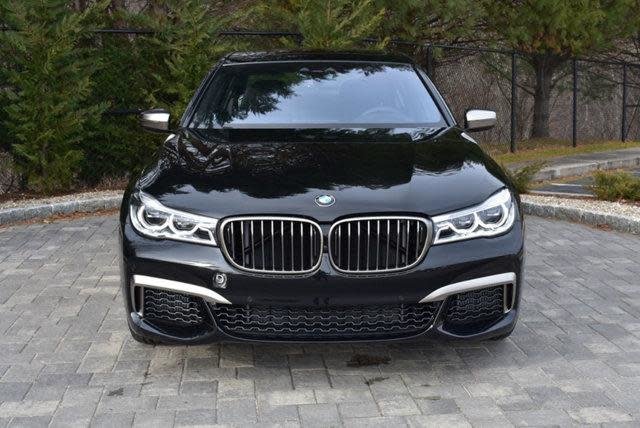 The BMW 7 Series, a full-size executive luxury sedan, carries over largely unchanged for 2019. The 7 Series is available in 740i, 740e, 750i, and M760i trims, with escalating performance and price. A sport-tuned Alpina B7 is also available. The 750i, M760i, and the Alpina B7 are all-wheel-drive (AWD) only, but AWD is available on lower trims as well.

At the bottom of the 7 Series ladder is the 740i, which comes with a turbocharged straight-6 making 320 horsepower and 330 pound-feet of torque. In rear-wheel drive (RWD), it will get to 60 mph in 5.4 seconds, and when fitted with xDrive, it will get there in 5.1 seconds. The 740e is a plug-in hybrid version that pairs a turbocharged four with a 9.2-kWh battery and electric motor for a combined 322 hp. The 740e can travel 14 miles on electric power alone and manages 27 combined mpg.

Driving dynamics are only half the story in a large BMW. The reason most people buy a 7 Series is for what’s on the inside. And there’s plenty on the inside, including standard leather heated power seats, a moonroof, 4-zone climate control, and a 10.1-inch infotainment screen. On the options list are massaging functions for the front seats and upgraded leather, while in the back there is an available package that adds heating, cooling, and massaging to the seats, plus heated armrests. Reclining features, tablet controllers, and entertainment screens are also available in the back.

The 7 Series is too expensive for crash testing, but it gets automatic emergency braking standard, while an option package adds active lane control, adaptive cruise control, and an autopilot feature for short distances.

The 7 Series’ primary rivals are from the rest of the German Big Three, namely the Mercedes-Benz S-Class and the Audi A8. The Mercedes has traditionally been the one to beat in this segment, but the 7 Series still offers all the speed, comfort, and tech that one expects from a full-size German executive car.

Users ranked 2019 BMW 7 Series against other cars which they drove/owned. Each ranking was based on 9 categories. Here is the summary of top rankings.