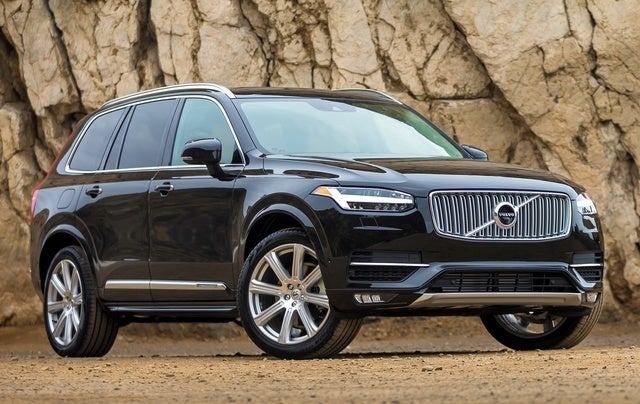 Can a vehicle start a revolution for a brand? If the vehicle is the Volvo XC90, then the answer is yes. Launched just a few of years ago, the XC90 sparked the Swedish automaker’s resurgence with a new engine lineup, an understated design, and new safety technologies. For 2018, Volvo is making a few small changes to its biggest SUV.

The XC90 is instantly recognizable as a Volvo, mostly due to its boxy shape. A Volvo design trademark since the 140 Series from the mid-60’s, the XC90’s boxy shape was modernized for the current century with rounded corners, smooth sides, and large windows. The front end displays Volvo’s eye-catching T-shaped “Thor’s Hammer” daytime running lights, and wheels range in size from 18 to 21 inches.

All of the XC90’s engines are 2.0-liter 4-cylinders with forced induction. The T5 uses a turbocharger for an output of 250 hp and 258 lb-ft of torque, while T6 models feature a twin-charger (turbo and supercharging) setup to produce 316 hp and 295 lb-ft. The T8 Plug-In Hybrid takes the T6 engine and pairs it with an electric motor and battery pack for a total of 400 hp and 472 lb-ft. The T5 has the choice of front-wheel drive (FWD) or all-wheel drive (AWD), while the T6 and T8 models make do with AWD. As for performance, reviewers have noted that the T5 provides underwhelming acceleration due to the weight of the XC90. The T6 is the one to go for, as it offers much better acceleration and almost as good fuel economy as the T5. The T8 is the hot rod of the XC90 family, posting a 0-to-60 time of under 6 seconds, although the power delivery is less smooth. Fuel economy ranges from 20 mpg city, 25 highway, and 22 combined for the T6 to 22, 26, and 24 for the T5 with FWD. The T8 returns a combined 54 MPGe and can travel up to 14 miles on electric power alone.

The XC90’s ride quality ultimately depends on the size of the wheels—larger wheels provide a fairly uncomfortable ride, as the impact from bumps and potholes travels right up through the seats. The optional air suspension does help somewhat, but you’re better off opting for a smaller set of wheels. Handling is impressive, as body motions are kept in check and the steering is very quick.

The interior of the XC90 is a feast for the eyes, with a modern and understated design paired with high-quality materials. Depending on the configuration, the XC90 can seat between 4 and 7 people. Those sitting in the front and second row will find plenty of head and legroom, while the optional third row offers the best legroom in the class—allowing even small adults to sit comfortably for short trips. If you want to truly coddle your passengers, look no further than the Excellence trim. It turns the XC90 into one of the most luxurious SUVs on the market with heated, ventilated, and massaging seats; rear captain’s chairs with foot rests; a rear center console with folding trays; heated and cooled cupholders; and 2 crystal glasses. Cargo space is impressive for the class, with 15.8 cubic feet behind the third row. This expands to 41.8 cubic feet with the third row folded and to 85.7 cubic feet with all seats folded.

On the technology front, all XC90s feature a 9-inch touchscreen with the latest version of Volvo’s Sensus infotainment system, and 2018 sees the addition of Apple CarPlay and Android Auto as standard. Reviewers like how quickly the Sensus system responds to inputs and smartphone gestures such as pinch-to-zoom or swiping, but be aware that certain settings such as the audio and heated seats are somewhat difficult to find due to how the system is laid out. An 8-inch digital instrument cluster comes standard, while a larger 12-inch digital cluster is available as an option.

The most apparent update for 2018 deals with safety—all XC90s will now come standard with Volvo's Pilot Assist with adaptive cruise control and blind-spot monitoring with rear cross-traffic alert. That’s on top of an already impressive suite of safety features that includes LED headlights, City Safety collision avoidance, a reversing camera, and lane-departure warning. Pilot Assist uses a number of the XC90’s existing safety systems to provide a semi-autonomous driving experience when on the freeway. You’ll still need to pay attention when using Pilot Assist, however—the system monitors the angle of the steering wheel to make sure your hands remain on the wheel. If it detects that your hands are not on the wheel, it will issue a warning before turning off the system. Optional features include automatic high beams and active bending headlights. The XC90 received a 5-star overall rating from the National Highway Traffic Safety Administration (NHTSA) and is a 2017 Top Safety Pick from the Insurance Institute for Highway Safety (IIHS).

My family and I were on a 2,200-mile road trip. We pulled off the interstate to refuel. Like many stops previously I had popped opened the fuel door uneventfully. This particular stop the fuel do...

How To Get The Side Mirrors To Open

I bought an XC 90 T6 inscription and got a polestar tune done. Just had it’s 30k service and the new software update and as soon as I hoped in the car it felt like the tune has been wiped or lost? ...

Considering I purchase to own the 2018 Volvo T8 eAWD momentum, is there any additional cost of maintenance in the years to come, in contast to an all gas car? Battery longevity etc?