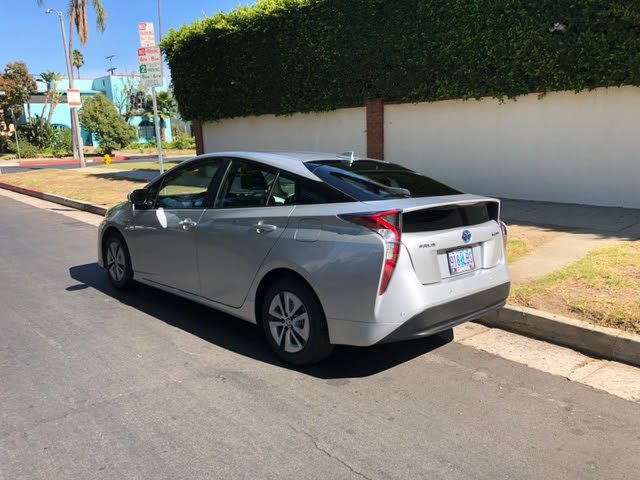 Since its first generation in the late 1990s, the Toyota Prius has gone from a vehicular novelty to becoming ubiquitous on the open road. These hybrids have become an icon and the standard-bearer of the green-car genre. Beyond high fuel-economy ratings, the Prius offers serious practicality, composed driving characteristics, and a long list of standard features that make it an ideal commuter car.

In its fourth generation, the 2018 Prius remains largely unchanged from previous model years. One striking new option is an 11.6-inch touchscreen infotainment system.

Past generations of the Prius have had rather staid, conservative styling, but the fourth-generation Prius is the boldest take since it adopted the jellybean-like body style. For this model, aerodynamics are optimized further, but certain design elements steal attention from the overall shape. The headlights are like a piece of modern art, and the C-pillar exiting into the trunk tricks the eye into thinking it looks more like a sedan.

The interior, while conventionally styled, remains distinctly “Prius.” The contrast of white plastic panels on black conjures up the idea of an iPad on wheels. As with past models, the instrument panel of the Prius is in the center of the dash, rather than in front of the driver. While some find this distracting, the design is straightforward with large, easy-to-read fonts. An optional head-up display projects vehicle speed and other information onto the windshield in front of the driver.

Like the simplicity of its design and purpose, Toyota offers the Prius in trims One, Two, Three, and Four. The Two is also offered in the Eco sub-trim, and the Three and Four both offer “Touring” sub-trims.

The core of the Toyota Prius is its hybrid drivetrain. It starts with a 1.8-liter inline 4-cylinder engine, combined with an integrated assist electric motor and an electric traction motor. Electric energy is stored in a nickel metal-hydride battery pack, or, in the case of the Eco trim, a lithium-ion battery pack.

The Prius sends power through a continuously variable transmission and its hybrid layout to the front wheels. The Prius shifter layout differs from other Toyota models, but it is similar to past iterations of the Prius, so return buyers will feel right at home.

Fuel efficiency is expected on the Prius, but its responsive driving characteristics are surprising. The Prius features double wishbone front suspension and multi-link rear suspension. Prius Three Touring and Four Touring include unique suspension tuning for a further refined ride.

Driving a fuel efficient car doesn’t require sacrifice. From its bold exterior styling to its spacious interior and refined driving characteristics, the 2018 Toyota Prius goes well beyond delivering fuel-efficient daily driving. It is a hybrid that continues to embody the future of motoring.

GuruXRVRG Love my 10 yr old Prius. No trouble until this year and that has been repaired. -- shift stayed stuck in the unmovable place; no forward. It took some time to diagnosis and repair it but it is ok now

Have you driven a 2018 Toyota Prius?
Rank This Car

My 2018 Prius involved in front collision,all fixed runs great average 51mpg but screen shows several malfunctions how do I fix thanks. Dave

I see a private party whos price is lower than a dealer on a car that seems to me to be exactly or better than the dealers. Yet the private parties rating is "good" the "dealers" great. What gives?

Why does a Prius have to be towed on a trailer

Tire Was Poke On The Side By The 1 Inc Nail, Do I Need To Replace It?

Is there a secret button I have to push to get to the CD player this side indicates is standard on the 2018 Toyota Prius Four with the big ass screen?