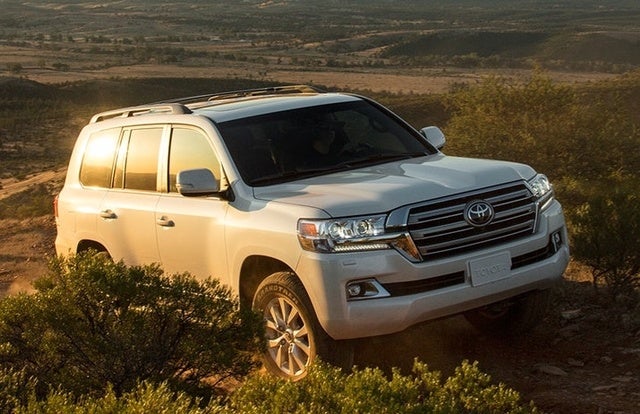 Certain things get better with age, such as wine and cheese. The same cannot be said for most cars, as age tends to hurt them in terms of design, features, and safety. There are exceptions to this rule, however, and a prime example is the Toyota Land Cruiser. This go-anywhere SUV, which was last redesigned back in 2008, will enter the 2018 model year with only a minor noteworthy change.

Imposing is the best way to describe the Land Cruiser’s exterior. Its boxy shape features a massive front grille, LED headlights and daytime running lights, acres of glass, and a split-opening tailgate. A set of 18-inch aluminum wheels is wrapped in meaty off-road tires. The interior straddles the line between utilitarian and luxury, as materials are noticeably better than you will find in other Toyota models, with more high-quality materials such as wood trim and leather upholstery. The design is a bit plain and somewhat boring when you compare it to the likes of the Land Rover Range Rover, Mercedes-Benz G-Class, and even its sister model, the Lexus LX 570.

The Land Cruiser offers seating for up to eight people. Most seats provide plenty of head- and legroom, along with excellent support for long trips. The third row is best reserved for small kids due to its limited legroom, and cargo space is slightly smaller than what you will find in competitors. Open the split tailgate and you’ll find 16 cubic feet of cargo space behind the third row. Space increases to 43 cubic feet when the third row is folded and 82 cubic feet with all seats dropped.

All Land Cruisers get a 9-inch touchscreen with Toyota’s Entune infotainment system. Entune may not have the same splashy graphics as some competitors, but it makes up for this with a simple interface, snappy performance, and a range of applications such as Pandora, OpenTable, and Yelp that can be used when the system is connected with a smartphone. Those looking for Apple CarPlay or Android Auto are out of luck, as the Land Cruiser doesn’t offer either. A backseat DVD entertainment system that was previously standard becomes a standalone option for 2018.

Power comes from a 5.7-liter V8 pumping out 381 horsepower and 401 pound-feet of torque. This is paired with an 8-speed automatic and a full-time 4-wheel-drive (4WD) system. The Land Cruiser can get moving quite quickly when leaving a stop, thanks to most of its torque being available at a low 2,200 rpm. Reviewers also note the engine never feels out of breath as speed rises. When properly equipped, the Land Cruiser can tow up to 8,100 pounds. Fuel economy is the downfall of the Land Cruiser, though, with the EPA estimating it will return 13 mpg city, 18 highway, and 15 combined.

The Land Cruiser has earned a well-deserved reputation for being one of the most capable SUVs on sale. The full-time 4WD system comes teamed with a 2-speed transfer case that varies power delivery depending on whether you're driving to the store or to a cabin deep in the woods. Toyota’s Multi-Terrain Select system changes various settings in the engine, transmission, and other key parts to help get the Land Cruiser through whatever terrain you’re tackling. Other off-road features include Toyota’s Kinetic Dynamic Suspension System (KDSS) that improves wheel travel on uneven surfaces by disconnecting the sway bar; Crawl Control, which acts as a low-speed cruise-control system for dealing with difficult situations such as a steep hill; and the Multi-Terrain Monitor system, which gives the driver a 360-degree view of the vehicle’s surroundings.

With all this off-road capability, you might expect the Land Cruiser to be a bit of a mess on regular roads. But that is not the case here—the Land Cruiser provides a smooth and confident ride. Steering feels precise but is quite heavy when turning, and wind and road noise are kept to very acceptable levels.

What's your take on the 2018 Toyota Land Cruiser?

Have you driven a 2018 Toyota Land Cruiser?
Rank This Car

What is the recommended kilometers for changing the timing belt