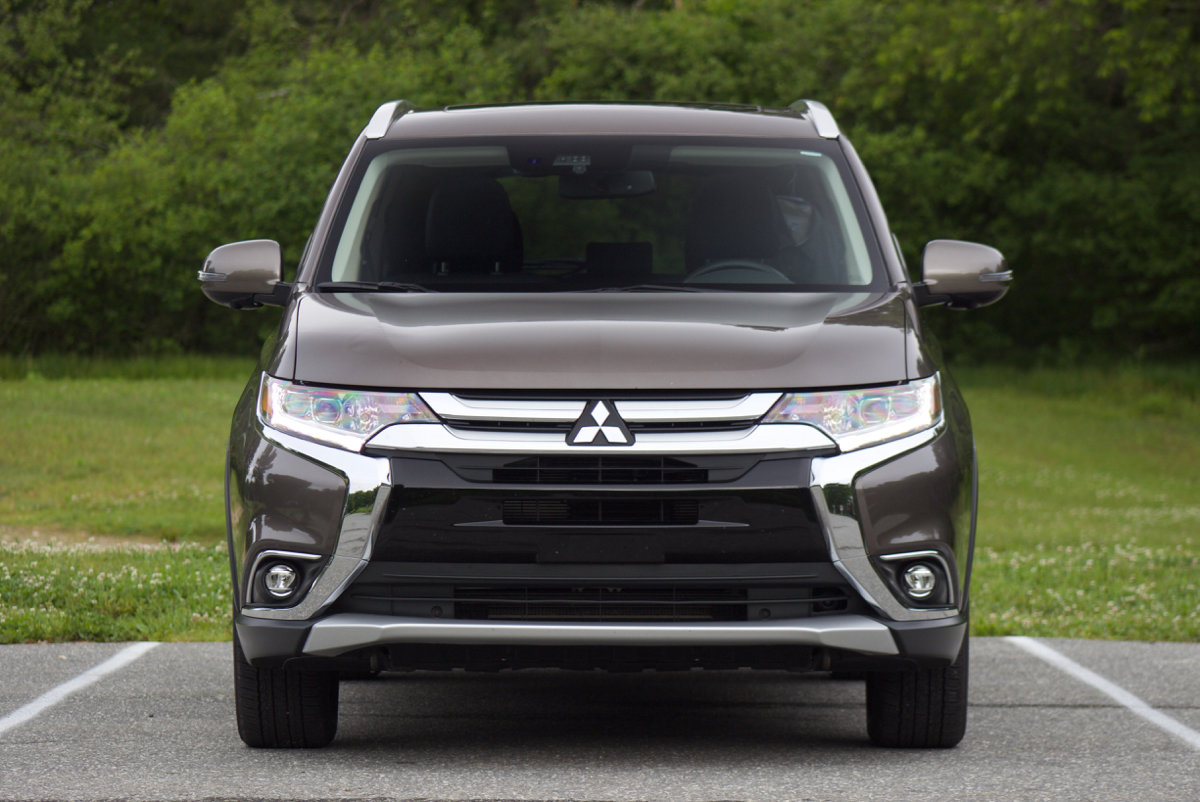 Let’s get one thing out of the way: The Mitsubishi Outlander is not at the front of the SUV pack. There are many more recognizable names, and for good reason. It rides on a old platform that can be traced all the way back to 2005. But the Outlander makes the most of what Mitsubishi has to offer by delivering features that buyers want right now, like the latest driver-assistance and infotainment technology. Shoppers may overlook things like an uninspiring interior and middling ride quality if they can hook their iPhone up to Apple CarPlay. 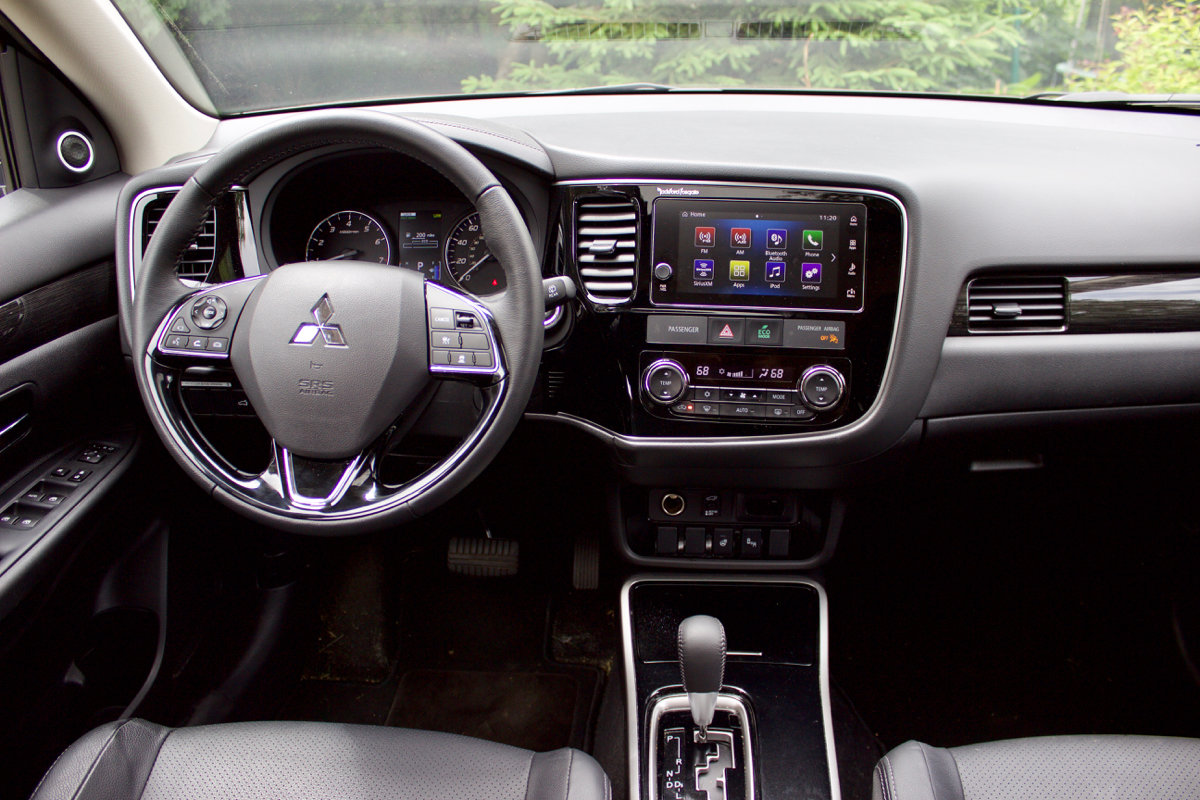 Mitsubishi updated the Outlander in 2016, with a far bolder (and much needed) design. That update, predominantly featuring a large, blacked-out middle bumper capped by a chrome border has been carried over to today. It was a necessary update, as the previous bumper would have looked far more at home in 2005, rather than 2015. The changes keep the Outlander somewhat fresh while being minimally invasive—not a deep overhaul, but smart updates.

However, move into the cabin, and the Outlander really starts to show its age. In fact, the overall layout looks largely unchanged from 2012. One of the most maddening parts of the interior is one of the most basic; The controls for the dual-zone climate controls are round… but they’re just buttons. It's as if Mitsubishi is reminding us we could have had dials, but don’t. Considering the smaller Outlander Sport has actual dials, the Mitsubishi vehicle lineup lacks cohesion.

The radio controls and touchscreen don’t fare much better. You have a volume knob, but no tuning dial. Instead, you have to push an icon to change the station—one channel at a time. Mercifully, there is a manual entry toggle for radio stations. Honda fell victim to this with the Civic—and it didn’t even have a volume knob. The new Civic finally has a volume knob again, but still no dial, but other new Hondas have more real dials, proving it learned its lesson.

People want to be able to change the station without taking their eyes off the road. But, just like with the temperature buttons, Mitsubishi went with a design that was not intuitive.

Trims for the Outlander are ES, SE, LE, SEL and GT—and yeah, that ES/SE thing is sure to get confusing for shoppers. The base ES comes standard with 18-inch two-tone alloy wheels, a leather-wrapped shift knob, 7-inch touch screen display, HD radio, Bluetooth connectivity, and a USB port. It also comes with remote, keyless entry, and dual-zone climate control.

The GT is the range-topping trim. It features LED headlights, LED fog lights, steering-wheel-mounted paddle shifters, and a power sunroof.

Our test model also came with the available SEL Touring Package. In addition to the existing SEL equipment, the Touring Package adds forward-collision mitigation, lane-departure warning, and adaptive cruise control. It also adds LED head- and fog lights, a heated steering wheel, and a 9-speaker Rockford Fosgate stereo system. It makes for a pretty well-equipped vehicle—in fact, the Outlander adds a solid amount of content even in the SE trim, making this SUV a decent value. 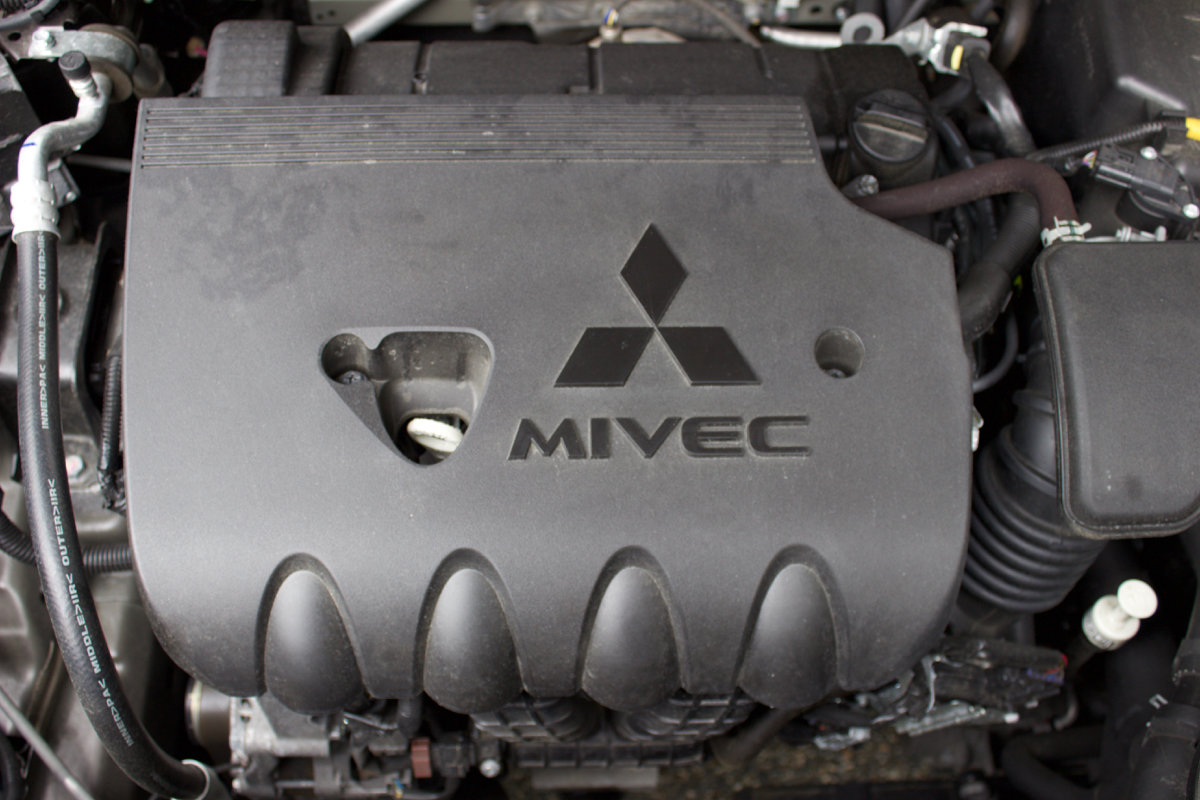 Most trims of the Outlander (including our SEL tester) come equipped with a 2.4-liter 4-cylinder engine, which makes just 166 horsepower and 162 pound-feet of torque, sent through a continuously variable transmission, to the front wheels or available all wheel drive.

The Outlander GT is the only trim to feature the upgraded 3.0-liter V6, making 224 hp and 215 lb-ft, sent through a 6-speed automatic transmission with paddle shifters. Neither engine offers stellar performance—especially when compared to the Outlander's rivals, some of which extract more power out of smaller engines.

The GT comes standard with all-wheel drive. Mitsubishi calls its AWD systems All-Wheel Control (AWC) and Super All-Wheel Control (S-AWC). The latter actually factors in additional systems, such as an active front differential and active stability control. A button down in the center console allows the driver to swap between Normal, Snow, Lock, and AWD Eco drive modes.

Our test model featured the four-cylinder engine with S-AWC, and it really had to work to get up to speed—and wined all the way. From a standstill, the throttle is a little touchy. As a result, you get a bit of a jump off the line, which will help in cities and stop-and-go driving. But getting up to highway speeds is a real chore.

If you are trying to merge onto a highway or trying to pass someone, you can extract a bit more speed by moving the shifter into Drive S. This mode holds a far more aggressive shift ratio, allowing you to squeeze the most of the Outlander's underpowered engine.

And unfortunately, once you do get up to speed, braking does not inspire confidence. Overall, the Outlander's brake feel is quite numb.

There is also definite body roll when you steer the Outlander into a corner, and it requires more attention than the average small SUV to stay on all four wheels. But once the Outlander leans into the turn, it does regain some composure. Still, rivals at the head of the pack blow it away in handling.

Fuel economy for the base engine with front-wheel drive is 25 mpg city, 30 highway, 27 combined. Our all-wheel-drive test car does 1 less in each category, and in a week of combined city and highway driving, we observed fuel economy of 19 miles per gallon.

Fuel economy for the GT S-AWC and its V6 engine is estimated at 20 miles per gallon city, 27 highway, 22 combined. 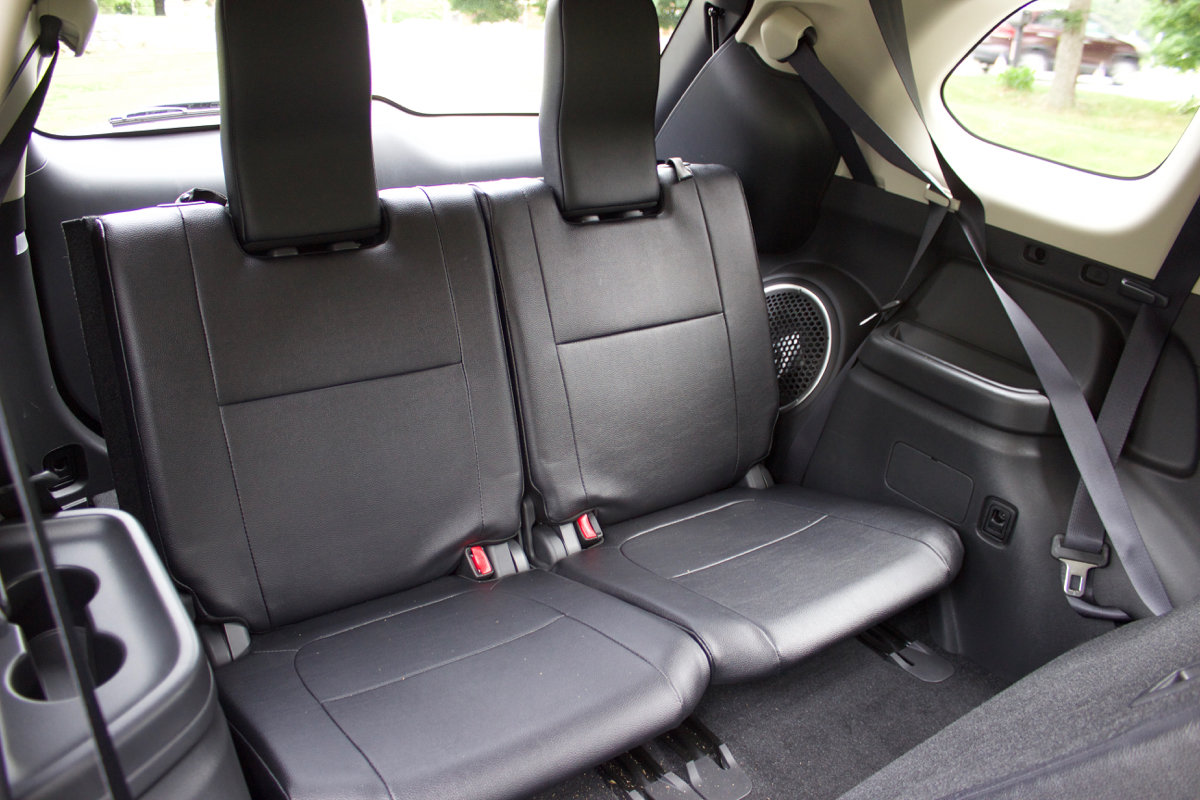 Up front, the center console isn’t overly complicated, allowing for plenty of space for your gear. And the first and second row seats of the Outlander are decently comfortable—but we drove the SEL, which was outfitted with leather upholstery. That definitely helped with comfort. Of course, even leather seats don't help much in the third row, which was very cramped. Additionally, getting back there required some contorting, and there was minimal head and legroom. But if you have kids, that third row will be fine.

The real problem is accessing said cargo space. To fold the seats all the way down, you have to lift up the bottom seat cushion and fold it forward. This may have been fine a decade ago, but nearly all seats drop in one single motion now. This design really hurts daily usability. 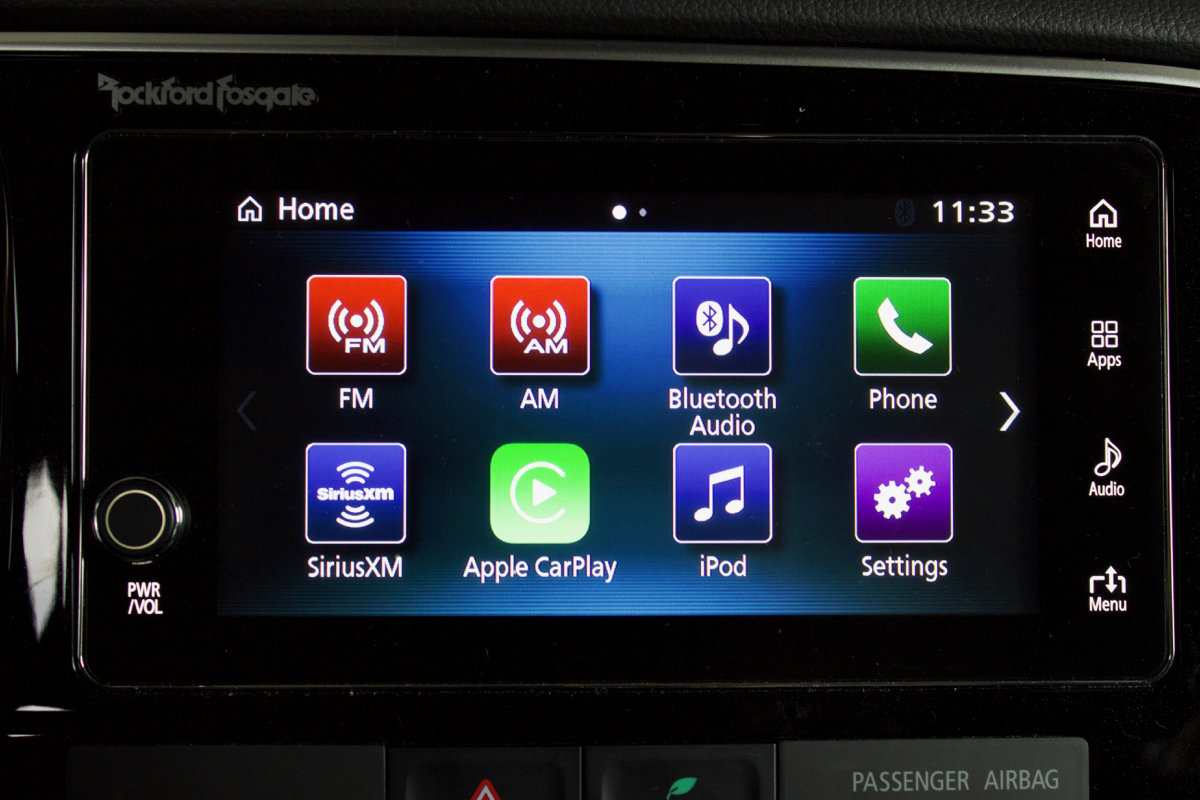 But Mitsu’ knew to allocate resources where it could make the biggest splash—or at least keep up with its competition. The modular nature of stereo head-units meant the Japanese automaker could pop in a system with the latest technology, and thankfully, that’s what it did. 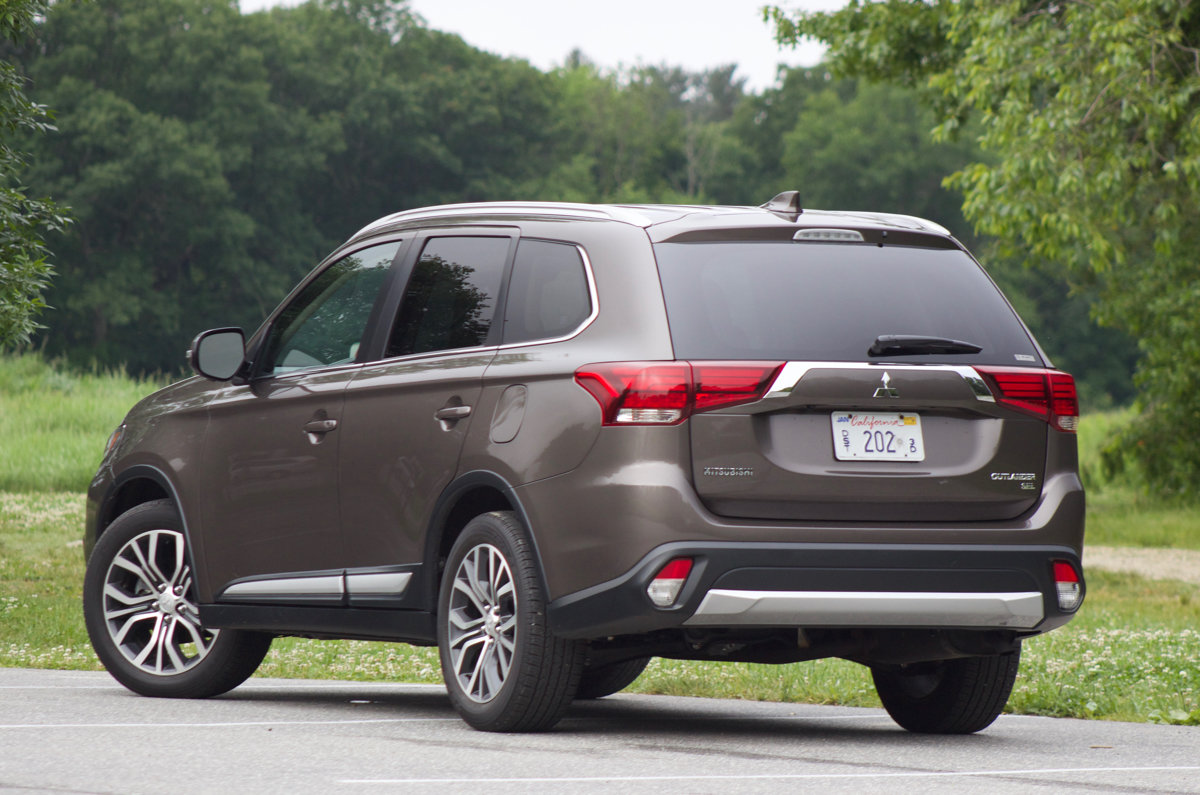 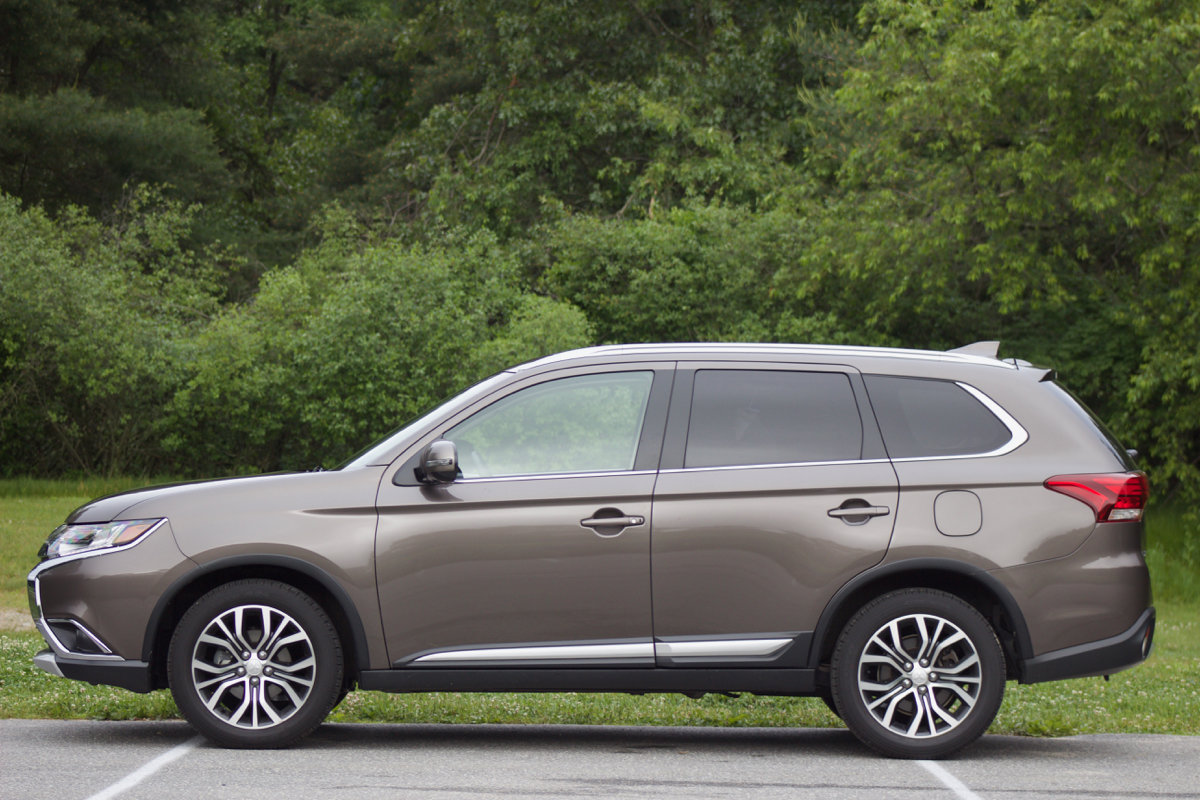 The range-topping GT S-AWC starts at $32,245. Add on the GT Touring package, and fees, and you’re looking at about $34,500 for a nearly-fully-loaded Outlander GT.

And when you realize what you get in actual content, that pricing is actually pretty fair. This sounds weird, but the Outlander almost benefits from its basic offering. Handling and fit and finish both leave something to be desired, but you can get the Outlander with advanced safety features and tech like Apple CarPlay and Android Auto. For many modern car buyers, the downsides can be overlooked in exchange for those key safety and modern technology features. On top of that, it comes with a 10-year, 100,000-mile powertrain warranty. Only Hyundai and Kia can match that on warranty.

The Outlander might show its age in many ways. Consider how far vehicles have come since 2005. Compact SUVs like the Honda CR-V, Toyota RAV4, and Ford Escape are far more evolved in that time, and comparing them doesn't even seem fair. To that end, the Outlander slots in between the compact SUV and midsize SUV segments. Of course, that means competing with the Honda Pilot and Toyota Highlander, which isn’t fair either. What the Outlander does instead, is make owning three rows more affordable, which is crucial for many families.

What's your take on the 2018 Mitsubishi Outlander?

MeredithLS I love these reviews but I hate when it’s this dude doing them. His face is....let’s say it’s unfortunate...there’s something about it that just makes it really hard to look at

Users ranked 2018 Mitsubishi Outlander against other cars which they drove/owned. Each ranking was based on 9 categories. Here is the summary of top rankings.

Have you driven a 2018 Mitsubishi Outlander?
Rank This Car

How Do I List My Car For Selling Here?

Does Turning The Vehicle Off And On Damage It ?

I NEED TO SELL MY CAR

55 views with 2 answers (last answer about a year ago)

How Did You Get The Great Price For Example This 2018 Mitsubishi Outlander ...