Looking for a Used E-PACE in your area?

Jaguar's second SUV is a lifted sports car for four. 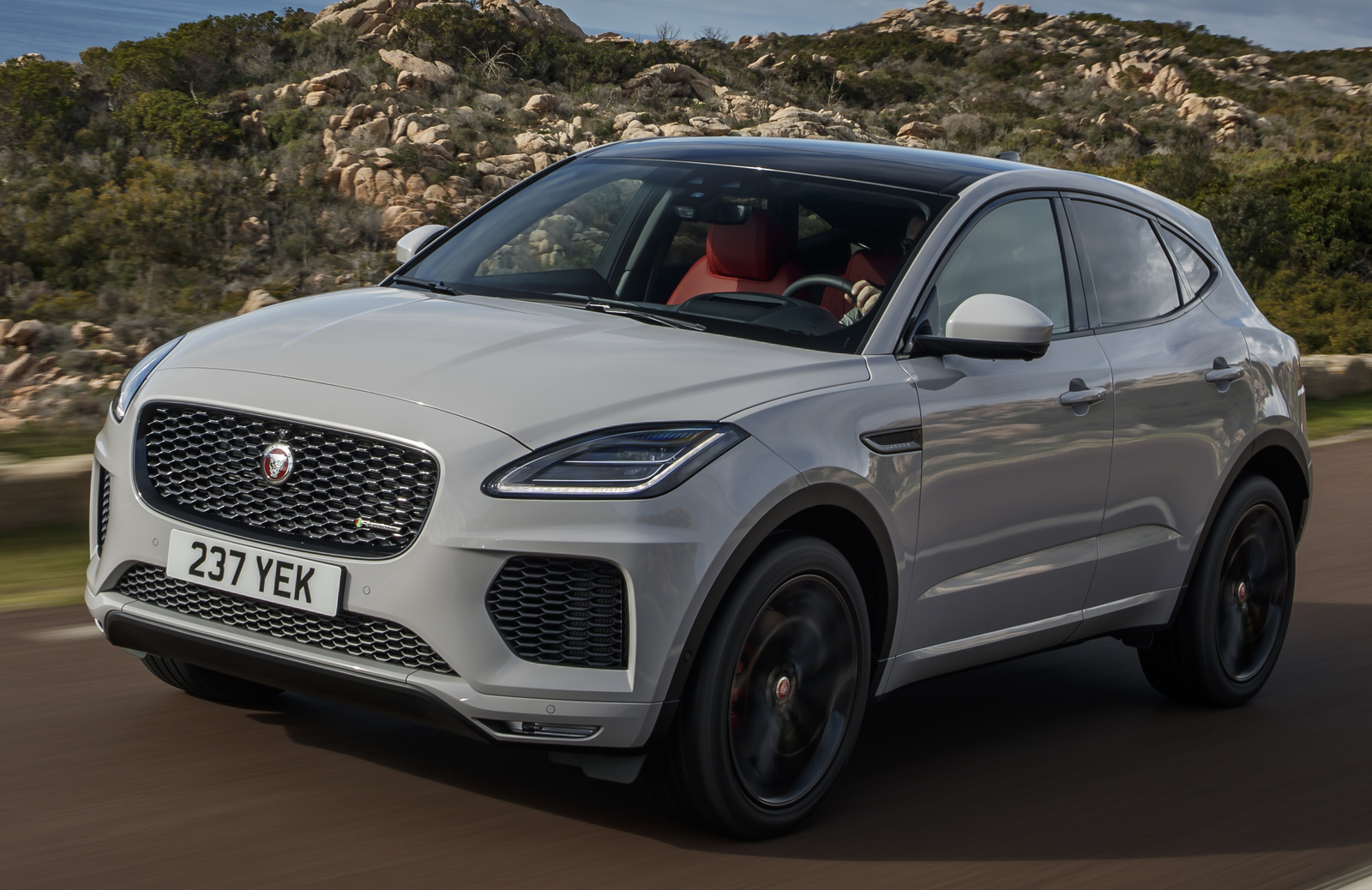 In 2012, Jaguar sold only three models, none of which attracted anyone seeking practicality. Low to the ground, rear-wheel drive, and packed with big V8 engines, these cars were expensive—and incredible to drive. Today, Jaguar's lineup is double the size and offers everything the modern luxury buyer wants: All-wheel drive, fuel efficiency, and lower price tags. The new 2018 E-Pace, a compact version of the midsize F-Pace, is Jaguar's second SUV. Even as an entry-level car, the E-Pace can still be prohibitively expensive. But as the alternative to German and Japanese brands, it's also one of the most fun and stylish small luxury SUVs. 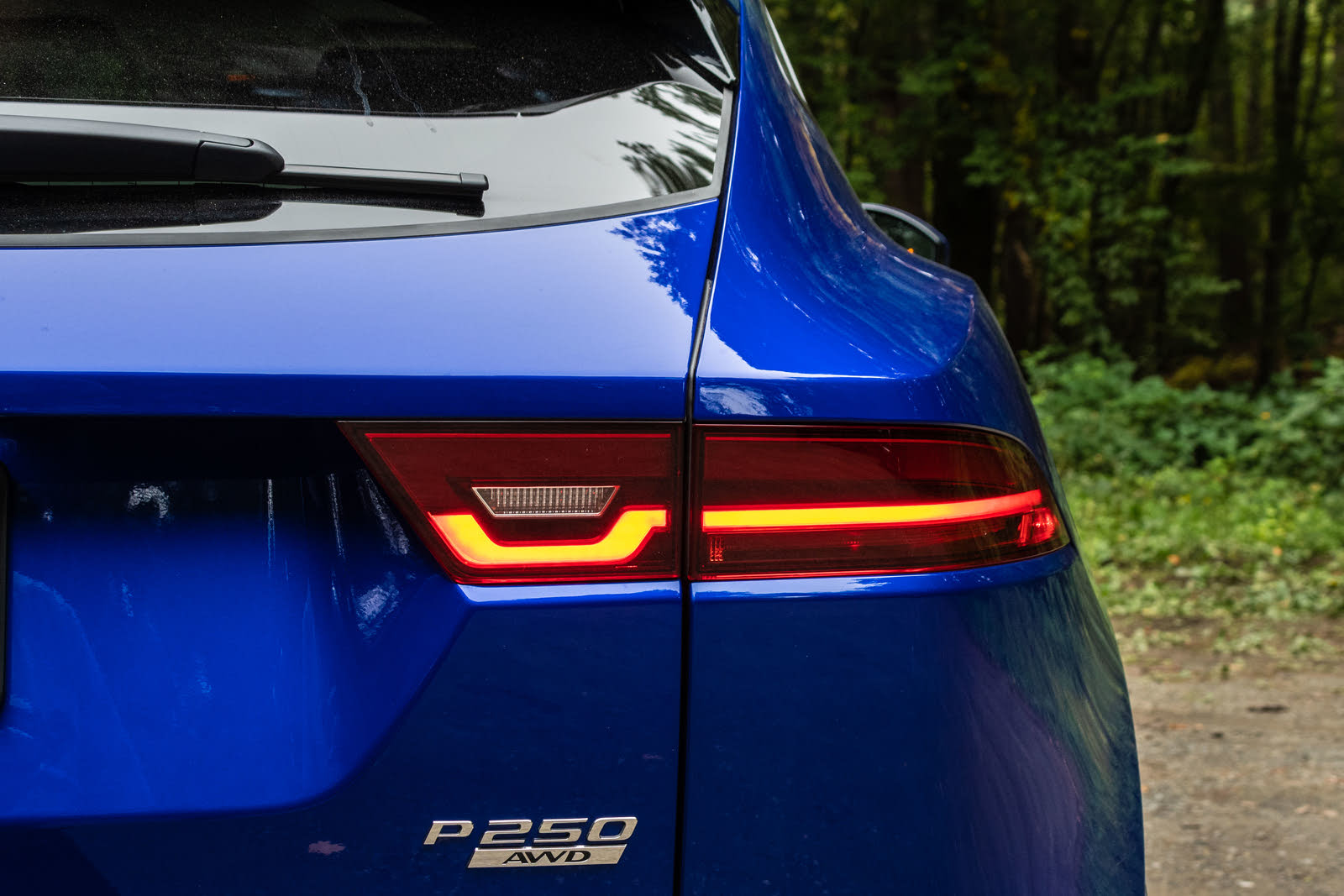 Designing sports cars is fun. Designing four-door family cars... less so. But this is a Jaguar, and aesthetics are its primary selling point. The E-Pace derives many signature styling elements from the F-Type: J-shaped headlights, thin LED taillights with a U-shaped dropdown, and a rear quarter with a miniaturized crease that arches above the fender. These are not press-release soundbites; these are direct observations from parking our Caesium Blue test car behind my silver F-Type coupe, walking around a bit, and giving the E-Pace a thumbs up. Small crossovers are not my life calling, but I can appreciate a pretty one. The E-Pace has everything going for it: short overhangs, a nipped-and-tucked tail, well-defined shoulder lines, flowing curves, and a distinctly Jaguar look shared with larger, more expensive models. There's no bad angle, and unlike many cars, it actually looks best from behind.

Inside, the interior does some more F-Type impressions with the passenger-side grab handle, three circular dials for the climate controls, and a toggle switch for selecting driving modes. The look is clean and simple, especially with our car's light gray and black colors, diamond-stitched leather seats, panoramic moonroof, and the 10-inch touchscreen. The doors are works of art, with exposed stitching and bright flashes of chrome. Yet the E-Pace goes budget on the interior materials, most notably the dull black plastic surrounding the entire center stack, and more hard plastic on the console contacting the front passenger's knees. The steering wheel is coarse and not any nicer than my 1998 Volvo's, plus it's missing paddle shifters—on the 2018 model, those are standard on only the sportiest trim. For the 2019 E-Pace, however, Jaguar will offer optional paddle-shifters and a nicer wheel on lower trims. The lighting, the crisp, high-resolution displays, and the leather's high quality are the E-Pace's saving grace from bargain-basement status. But for a Jaguar, this kind of quality knocks down its score. 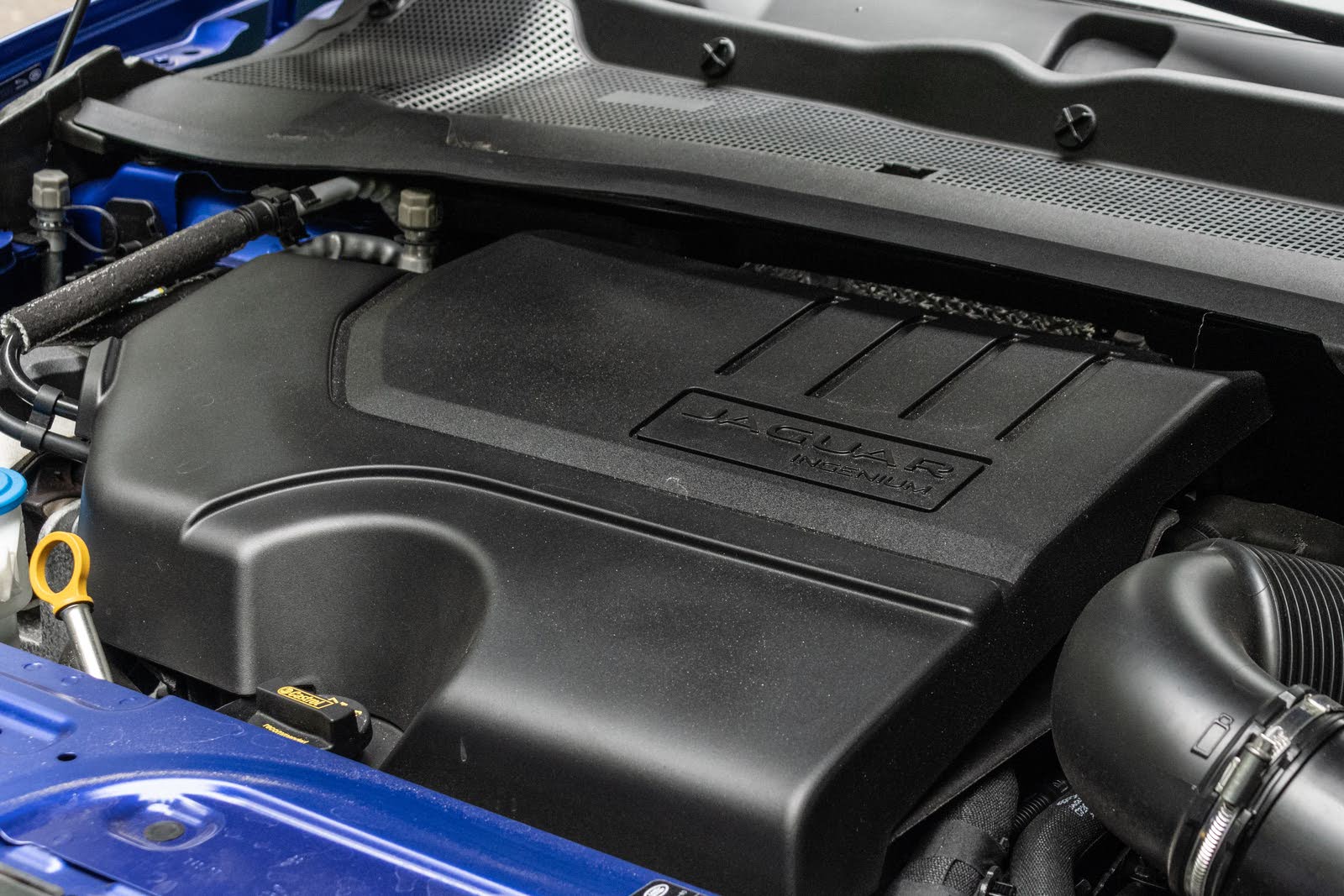 Whereas the F-Pace offers a range of engines housing four, six, or eight cylinders (including a diesel), the lighter, smaller E-Pace is fine with just a 2.0-liter turbocharged inline four. Just like in the base F-Pace, this makes 246 horsepower and 269 pound-feet of torque in the E-Pace's P250 trims. The sportier P300 R-Dynamic trims dial up the turbo boost for 296 horsepower and 295 pound-feet of torque. Both versions come standard with all-wheel drive (AWD) and connect to a 9-speed automatic with a manual shift mode available via the gear selector. I tested the P250 SE. Acceleration is strong, gear shifts are quick, and the engine note is pleasant; it doesn't have the whine and groans found in many 4-cylinders. There's plenty of shove in the engine's mid-range, too, but matting the throttle at higher road speeds will make sports-car drivers like me crave the F-Pace's larger engines. Still, for a small SUV, it's all most drivers will want.

The transmission is the weak link, however, as it lugs the engine in high gear to save fuel, sending unpleasant vibrations to the driver's hands and an uncomfortable rumble in the driver's ears. Shifting manually from fifth to fourth while off the gas—something you'd do while coasting or to begin slowing down in traffic—the car is alarmingly slow to react. It almost feels like the transmission clicks into neutral for a half-second before selecting the lower gear, which caused my head to jerk. The supplier, ZF, also makes the 8-speed automatic available in all other Jaguar models and the 6-speed manual in my F-Type. Neither are fussy like this 9-speed. It's best to let the E-Pace shift for itself and keep the car in Dynamic mode, which reacts more quickly to throttle inputs and tends to lug the engine less. It's even better when the shifter is in the S position, which keeps the revs higher but never high enough to be bothersome.

It's a pity this transmission can sometimes mar the driving experience, because the E-Pace feels like it was made to take corners rather than groceries. The suspension is stiffer than competitors' but not unyielding. Our car rode on optional 20-inch wheels ($1,330; 17- to 19-inchers are standard, depending on trim), plus our car didn't have the optional adaptive dampers that can better smooth out road imperfections. No matter. Handling is razor sharp, the steering is responsive and alive with feeling, and body roll is almost nonexistent. Braking is strong with secure pedal feel. In tight-radius turns, the E-Pace can brake the inside rear wheel to keep itself on the trajectory, while the AWD system can route up to 100 percent of torque to the rear axle. It's a zippy little guy.

Fuel economy is EPA-estimated at 21 mpg city and 28 highway for the P250 and 21/27 for the P300. Over 680 mostly highway miles, I averaged 26 mpg. That's adequate but unexceptional for an engine and vehicle of this size. 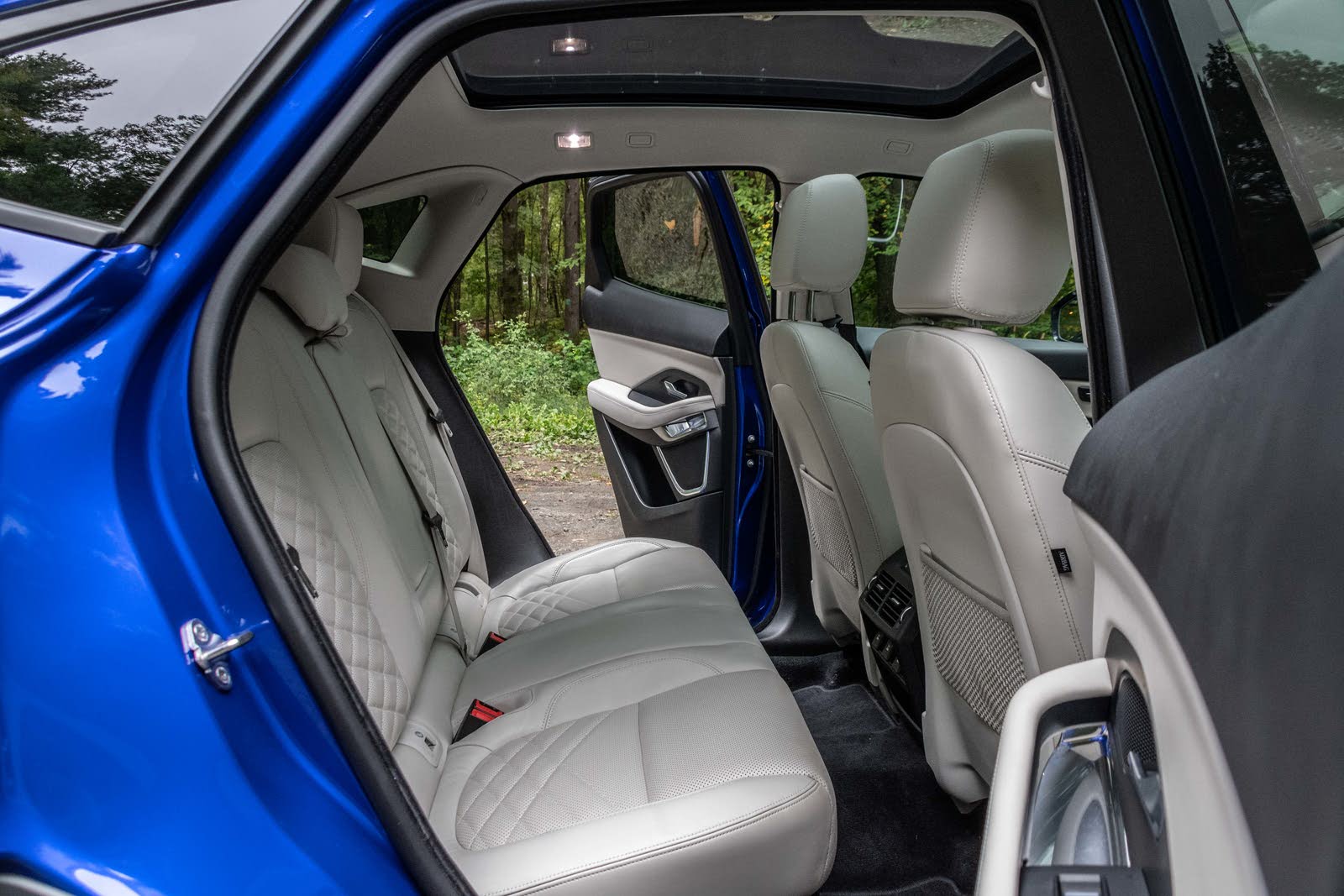 The E-Pace excels in the most un-Jaguar fashion: Practicality. You'd think with its small glass openings and sloped roof that space would be at a premium. Yet in the rear, 6-footers can stretch out without their knees touching the front seatbacks or their scalps pressing against a headliner. It's oddly roomy, and it's one of the few small luxury crossovers that could actually serve well for long road trips. Our model came with two additional USB ports ($230, bringing the total number of ports to 3) and heated outboard seats for rear passengers. Up front, the room is just as generous. It's tough to see past the rear quarters, and the rear door openings are a bit tight, although the rear window isn't as teensy as the Range Rover Evoque's. The cargo hold swallows a decent 52.7 cubic feet with the seats folded (or 24.2 cubic feet with them up).

Controls for the climate are clearly marked, while the same dials that adjust temperature also adjust the seat heating. You simply push to choose the seat, twist, and push again to change the air temperature. Easy and clever. Recessed gauges and a large central screen are other F-Type touches, and it was easy to cycle through menus on our car's digital instrument panel ($565), which can even show a full-width map among its various configurations. The main infotainment screen supports pinch-to-zoom maps, swiping, and is easy—if sometimes delayed in response—to navigate. A large center cubby and deep door pockets make storage a snap. 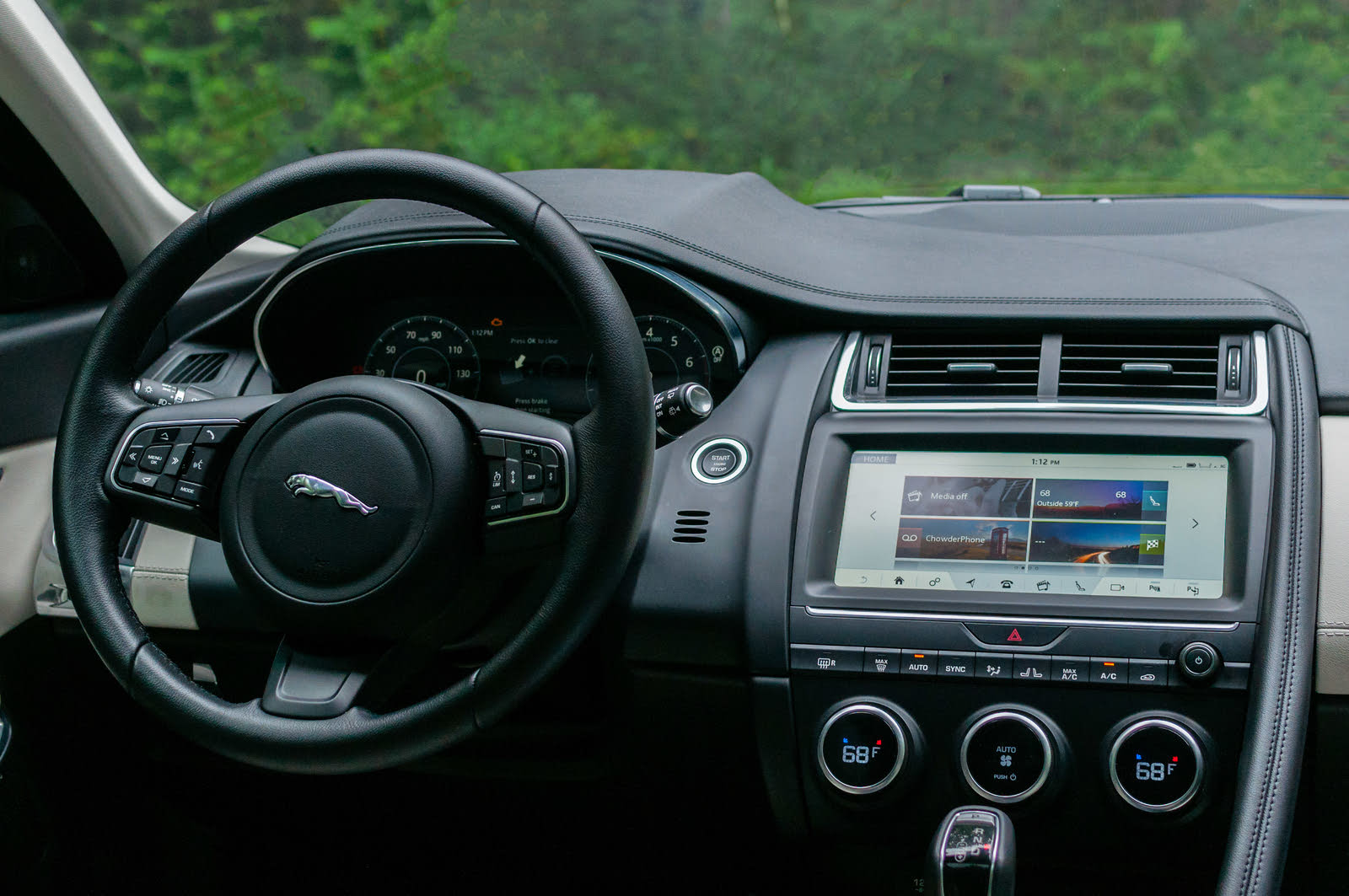 If it wasn't for electronic glitches, the E-Pace—and every Jaguar or Land Rover we've tested—would score higher in this category. I've had all sorts of things happen to me while driving these cars. With the E-Pace, it was relatively benign: The stereo wouldn't function, not from any source. This was annoying, as I had a 2-hour drive ahead of me and the system wouldn't reboot even after turning the car off and locking it for a couple of minutes. But alas, when it did work, the infotainment was impressive. High-res graphics, traffic and satellite map overlays, Wi-Fi, news and weather feeds directly on screen, and reconfigurable home screens are available on all but the base trim. Touch-sensitive map lights and the side mirrors' puddle-lamp lighting projection—which shows an image of a jaguar and her cub—are both cute and upscale. 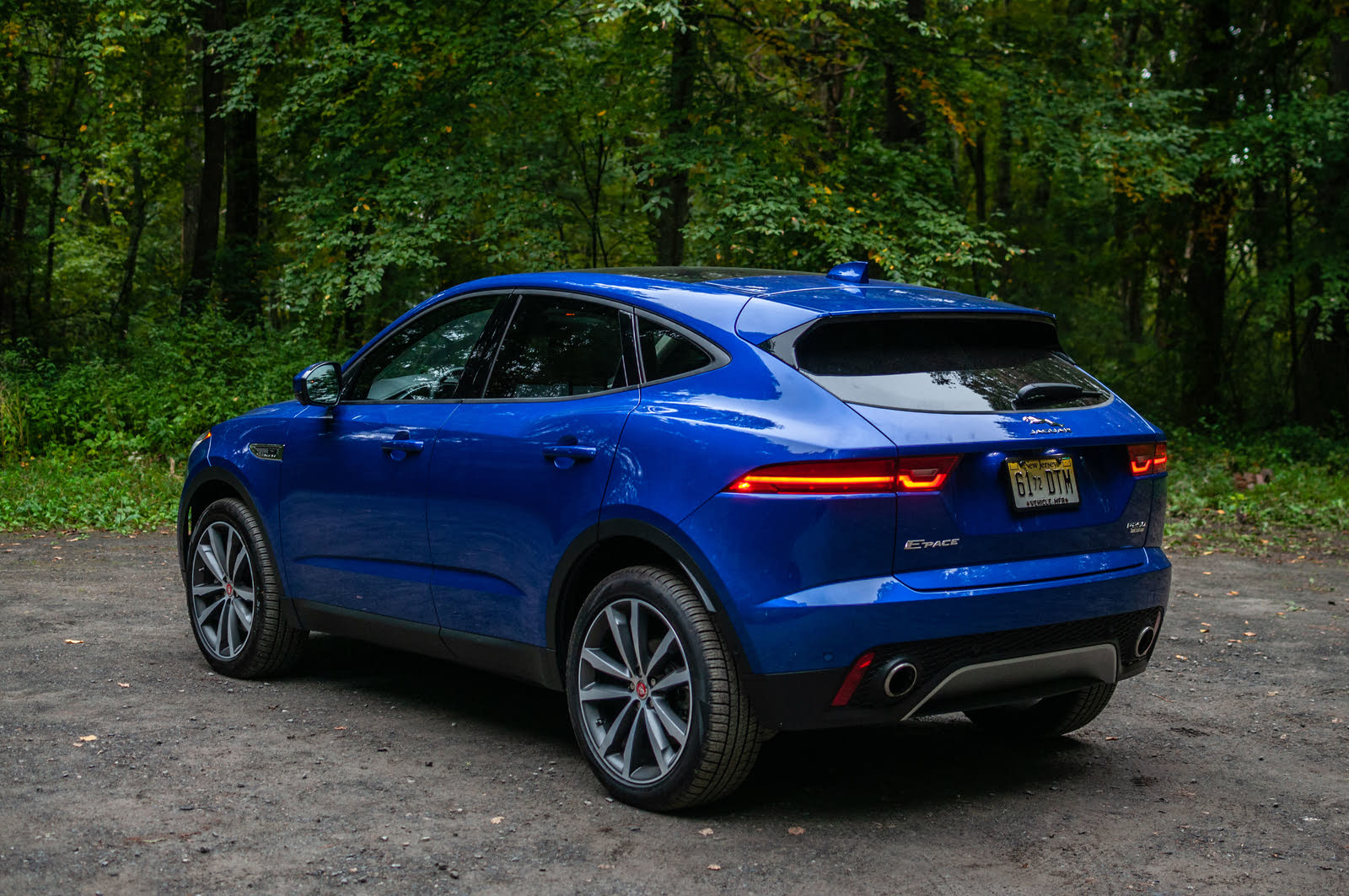 The E-Pace has not been tested by the National Highway Traffic Safety Administration (NHTSA) or the Insurance Institute for Highway Safety (IIHS), but its aluminum-intensive structure should hold up well in a crash. Automatic emergency braking, lane-keep assist, driver-attention monitor, and parking sensors come standard. Emergency braking that activates from higher speeds, blind-spot monitoring, and adaptive cruise control are available with the Drive package ($970) on S and SE models. A 360-degree camera system is also available ($360). 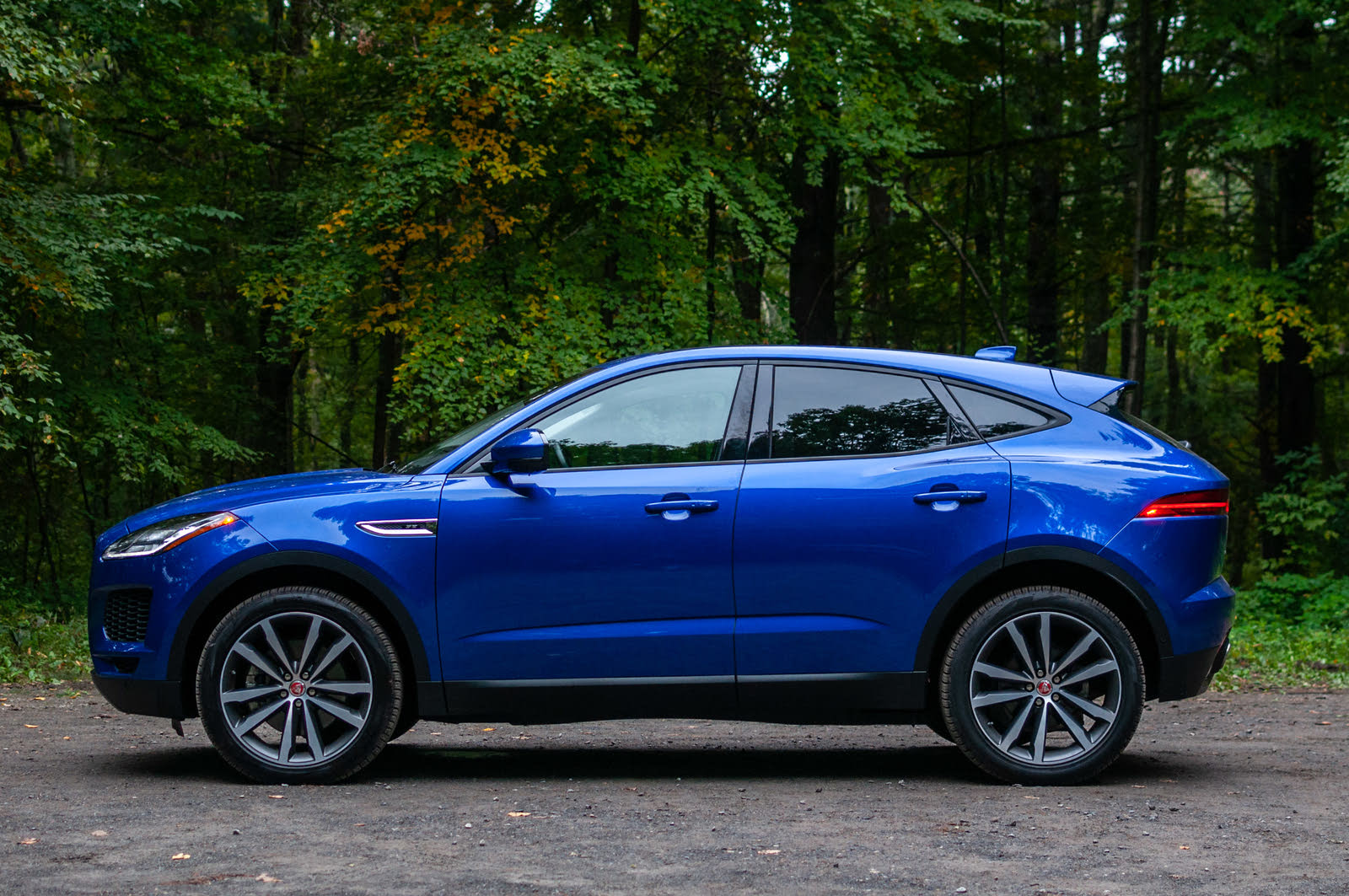 At $38,600, the E-Pace has a very approachable starting price, but there's not much aboard aside from cloth seats and a low-grade sound system. It doesn't come standard with navigation, power seats, proximity entry, or luxury basics like power-folding mirrors. Garage-door buttons and the auto-dimming mirror above them are both optional. To get more standard, grab the S trim at $41,500 or the SE at $44,300. There are also P300 R-Dynamic versions of each trim, with the P300 R-Dynamic S starting at $47,250. Even so, the R-Dynamic isn't fully loaded until you order the P300-exclusive HSE trim and then option it out to over 62 grand. My P250 SE tester stickered at $54,190 with destination, including the 20-inch wheels, Meridian stereo, moonroof, adaptive LED headlights, upgraded Windsor leather, and extra safety gear. This is not a terrific value, even among luxury competitors that run up huge tabs. The BMW X1, larger compact SUVs like the Acura RDX and Mercedes-Benz GLC 300, and other vehicles like the Infiniti QX50 are offering more equipment and better interiors for this money. Jaguar's 5-year/60,000-mile warranty with all scheduled maintenance is a welcome offer other brands don't match, but per dollar, the E-Pace doesn't deliver like other Jaguars do, and its electronics are still irksome. It's still a handsome, incredibly sporty, and roomy SUV. But like Jaguars of old, you'll need to pay.

Have you driven a 2018 Jaguar E-PACE?
Rank This Car

Looking for a Used E-PACE in your area?