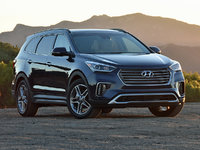 If you’re looking for a bargain in a safe, roomy, and dependable family-size crossover SUV, look no further than the 2018 Hyundai Santa Fe. 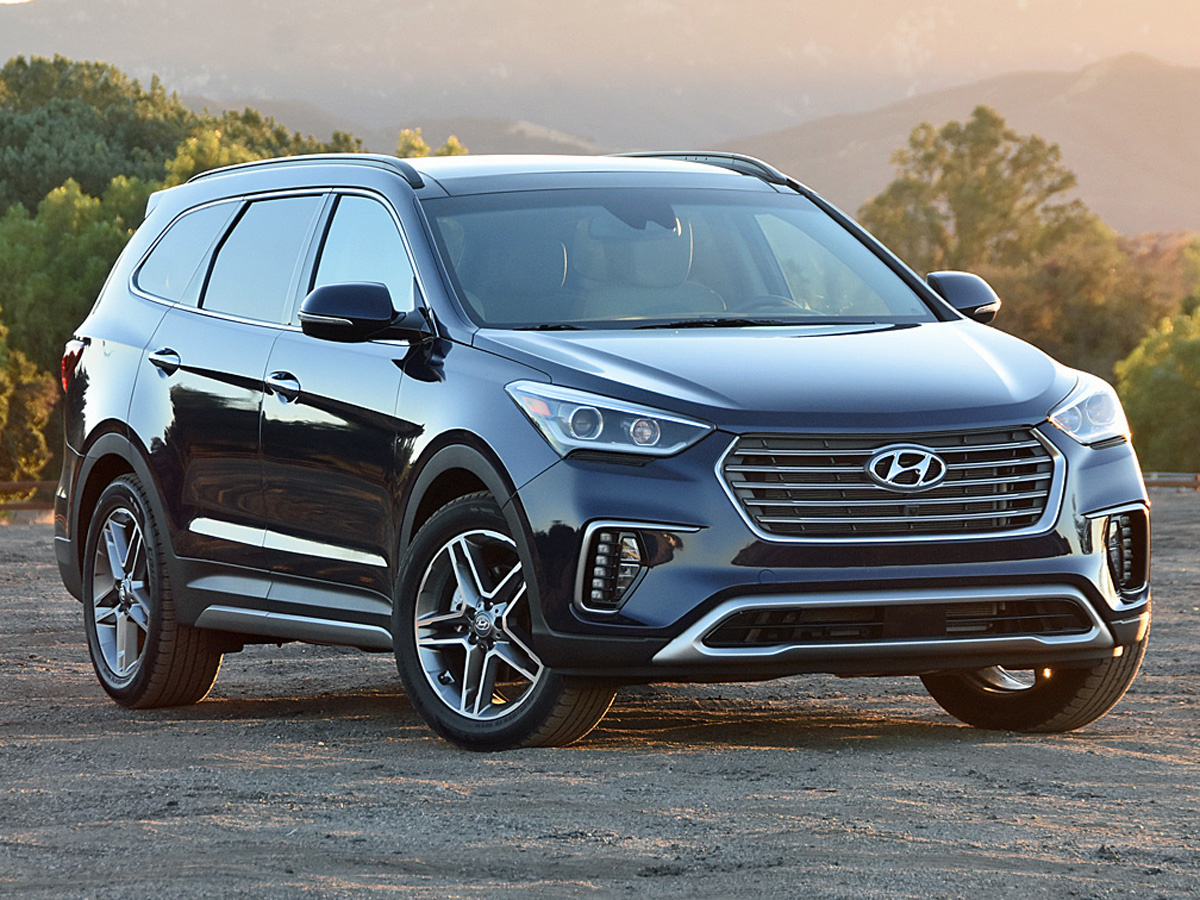 Among 3-row, 7-passenger crossover SUVs, the 2018 Hyundai Santa Fe is somewhat of a wallflower. It doesn’t help that it has been half a decade since the Santa Fe was last redesigned. Do not, however, let its age convince you not to consider it, because the Santa Fe is one of the safest SUVs you can buy and a raging bargain in its segment. 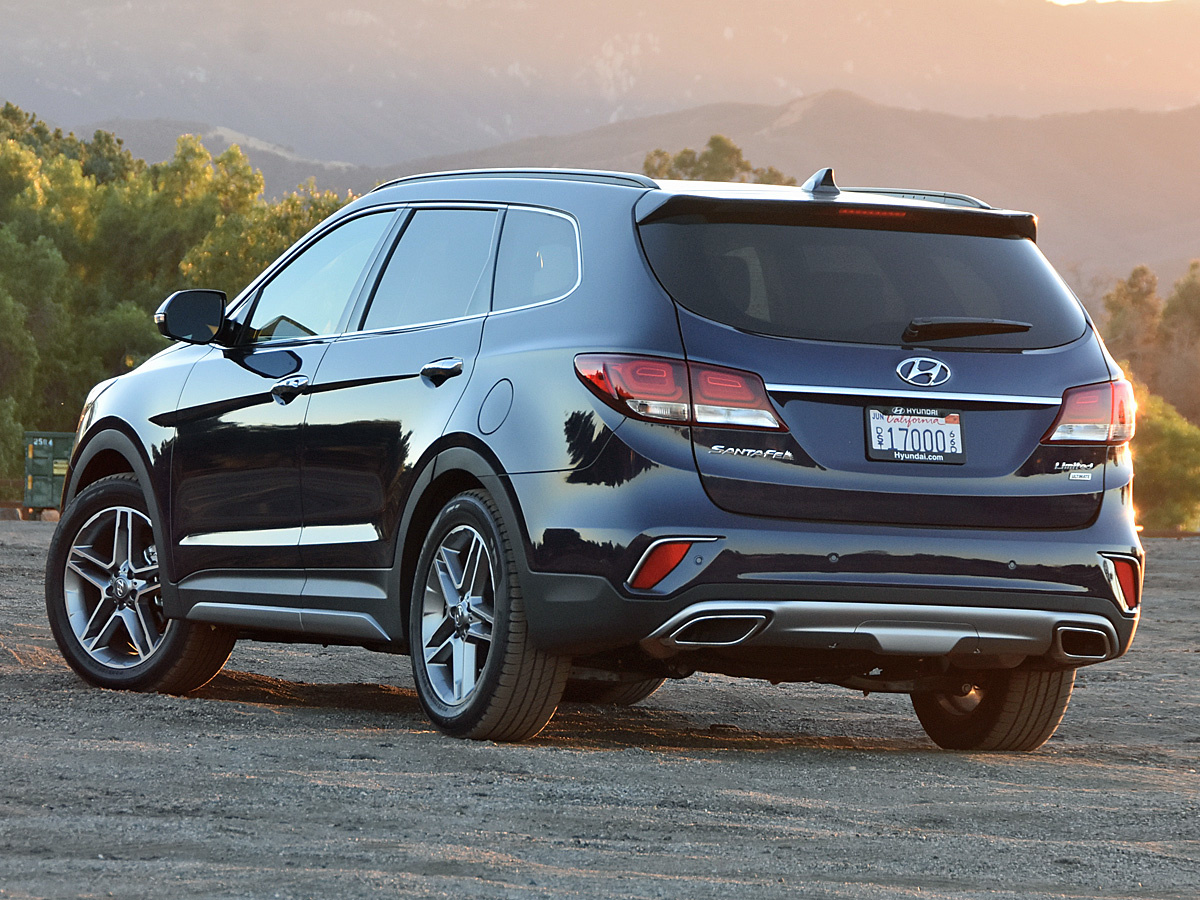 When you buy a 2018 Santa Fe, you choose between SE, SE Ultimate, and Limited Ultimate trim levels. They all have a 3.3-liter V6 engine, and they’re all front-wheel drive (FWD) unless you pay $1,750 extra for all-wheel drive (AWD).

The SE version costs $30,850, not including the $950 destination charge. It is well equipped right out of the box, but people with kids and pets will want to take note of its standard stain- and odor-resistant cloth seats and Clean Air cabin air filtration system.

The SE Ultimate is priced from $38,850 and includes everything that is standard and optional for the SE plus a long list of extras including bigger wheels and tires, navigation, a panoramic glass sunroof, premium sound, heated and ventilated front seats, heated rear seats… you get the idea. It is called Ultimate, isn’t it?

My test vehicle was the Limited Ultimate, which commands a price premium of $700 over the SE Ultimate for HID headlights that aim around curves and corners for a better view, LED taillights, second-row captain’s chairs, and some fancy silver trim on the doors. Literally, that’s it, which means there is nothing “Limited” about it.

As equipped with its optional Tech Package and a set of floor mats, my FWD Limited Ultimate test vehicle’s price tag was $41,800 before applying the ever-present deals that Hyundai offers on this SUV.

Just because the Santa Fe is a bargain, don’t assume it to lack style or substance. In my opinion, this is a good-looking vehicle, and the design reflects a level of cohesion and detail that is often lacking in the segment.

No matter the viewing angle, the Santa Fe’s exterior styling is balanced, reflecting tasteful symmetry. And though SUV cues such as dark gray plastic lower bodywork and silver accents are present, they’re understated rather than overwrought.

Inside, Hyundai’s approach is less successful. Various textures and clumsy seams create a visual cacophony, and though the automaker has eliminated the glossy fake wood that used to decorate the dashboard, the replacement hue isn’t much better. The materials covering the lower portions of the cabin could stand an upgrade in terms of sophistication, too.

Additionally, the Santa Fe’s dashboard is hewn from a previous Hyundai design philosophy, one emphasizing a pinched waterfall appearance rather than the company’s current horizontal themes. As a result, the Santa Fe feels tall and narrow from the driver’s seat, more like a minivan than an SUV. 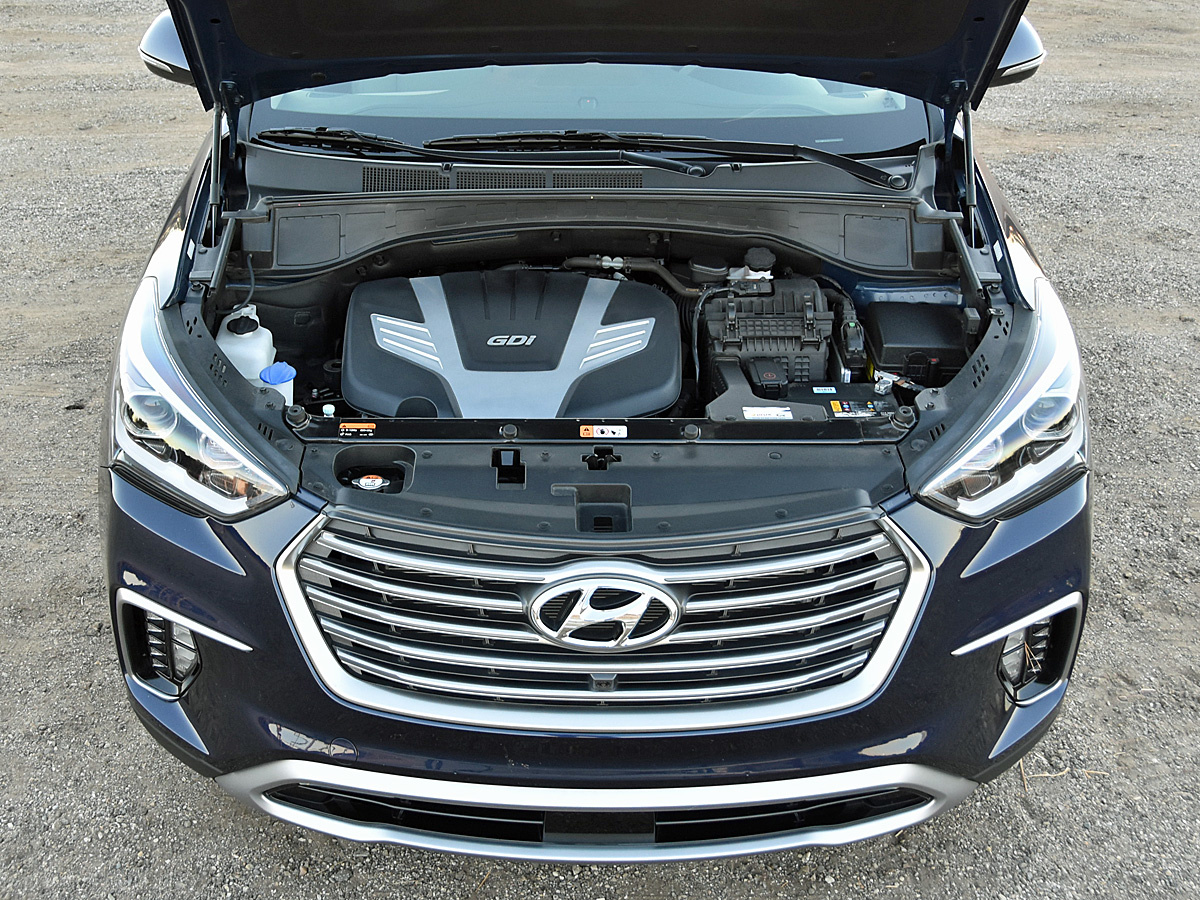 Predictably, driving a Santa Fe is not very exciting. But then you’re probably not looking for a family-size SUV to plaster a big smile on your face.

A 290-horsepower, 3.3-liter V6 engine is standard, paired with a 6-speed automatic transmission. It supplies plenty of power for the two-ton Santa Fe, and in a fairly refined manner.

A Sport driving mode aims to quicken the driver’s pulse, but really doesn’t. There’s also an Eco driving mode designed to maximize fuel economy, but it makes the Santa Fe feel lethargic. During my testing, I left the SUV in Normal mode the majority of the time and got an even 20 mpg on my test loop, exactly matching the EPA’s estimate for combined driving.

The ride is unexpectedly firm and connected, yet body motions are sometimes excessive on undulating roads. Sharper bumps demonstrate that a redesign is in order, one that will install a stiffer and more robust vehicle architecture.

Around town and on the highway, the steering draws no undue attention to itself, reflecting Hyundai’s continued efforts to make its electric steering systems feel more natural than in the past. While tackling a mountain road, the steering wasn’t particularly sharp or responsive, requiring correction on a regular basis.

The Santa Fe’s braking components represent a weak spot. Pedal feel and modulation are fine, but on a 55-degree day they faded considerably under repeated hard use while descending from nearly 2,000 feet in elevation to sea level. During a panic stop test while they were hot, the antilock brakes nevertheless engaged and brought the SUV to a halt, smoke rising from the front wheels.

So then, a Hyundai Santa Fe is not a good choice for people who love to drive.

With that said, I found the Santa Fe to be unexpectedly quiet inside, wind noise a problem only when driving head-on into blustery winds. Quiet, comfortable, roomy, safe, affordable, thoughtfully designed, and comprehensively equipped, there’s plenty to like about the Hyundai Santa Fe.

Except for driving it. 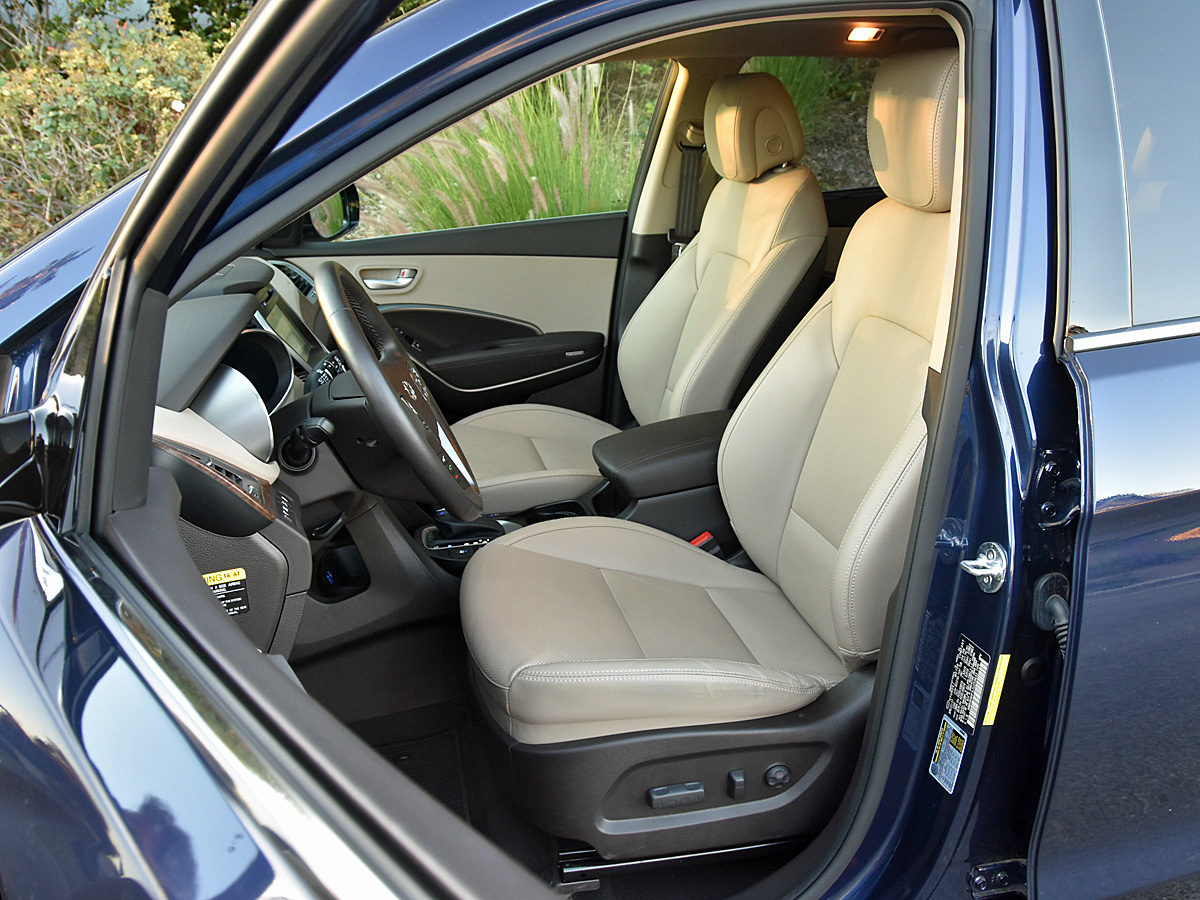 Seven people can cram into the Santa Fe SE and SE Ultimate, while the Limited Ultimate is restricted to six people due to its standard second-row captain’s chairs.

Both front seats have power adjustment, including for height, and in Ultimate versions both are heated and ventilated for extra contentment. The steering wheel is heated, too. As a result, it’s easy to get comfortable in a Santa Fe Limited Ultimate. All I wished for was a higher center console armrest.

Second-row comfort levels are good, and while Hyundai uses hard plastic to trim the front seatbacks, there’s so much legroom that this isn’t a problem. Thigh support is commendable, and the Limited Ultimate’s captain’s chairs are heated, too.

My test vehicle’s panoramic sunroof extends nearly into the third-row seat, providing passengers with a terrific view out, and Ultimate versions also have manual second-row side window shades, perfect for parents carrying babies and younger kids.

Thanks to the Limited Ultimate’s captain’s chairs, it's easy for kids to climb into the third-row seat, where they have their own climate controls and a USB charging port. Adults fit, too, though the seat is about as supportive as a park bench. Grown-ups will want to limit the time they spend in the way back.

Fold the third-row seats down to access a generous 40.9 cubic feet of cargo space. If you need maximum volume, fold the second-row seats using handy levers near the tailgate, and you’ll have 80 cubes of space. Both these measurements are easily competitive with other midsize crossover SUVs.

In terms of practical storage spots around the cabin, everybody benefits from various bins and trays, so finding a spot in which to stash things shouldn’t be an issue. 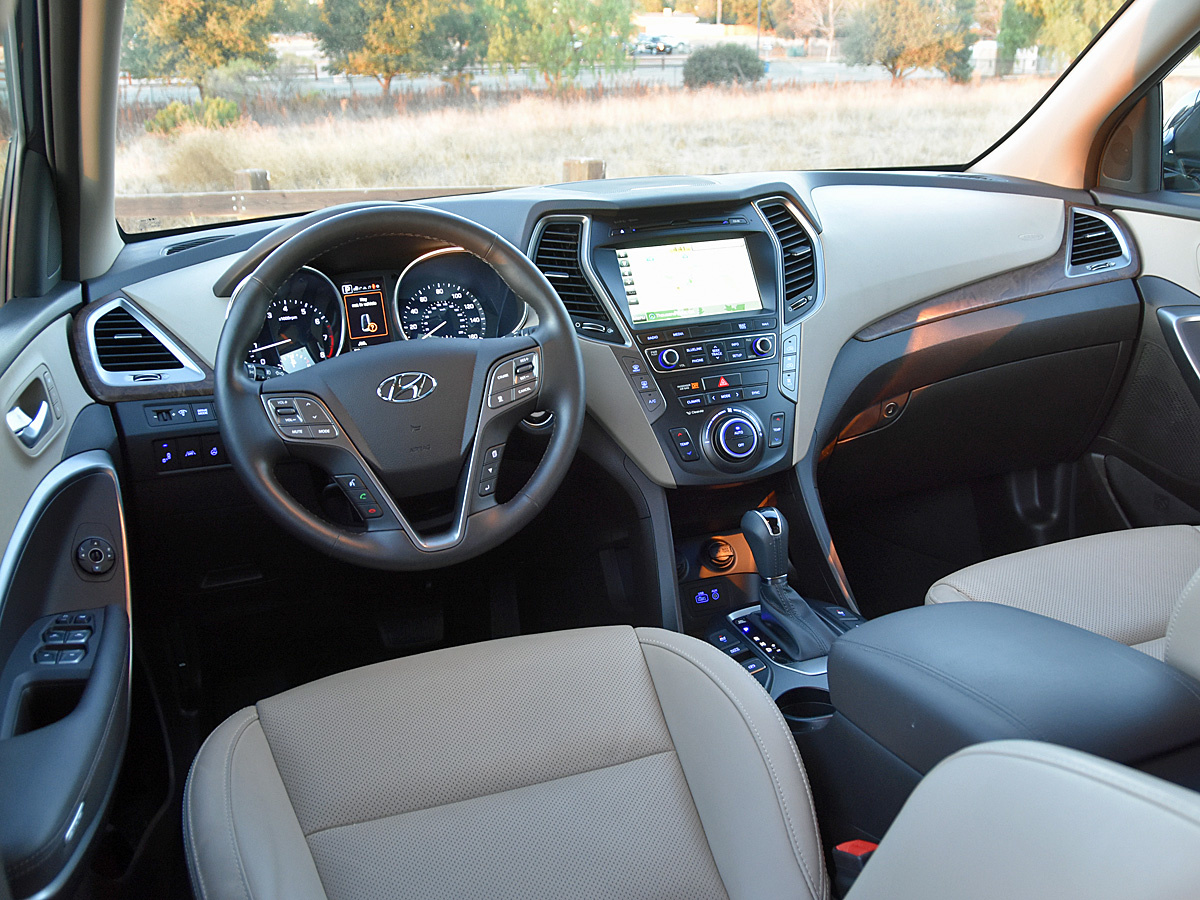 Equipped with an 8-inch display screen and a CD player, the Santa Fe’s infotainment system looks outdated due to its recessed rather than flush surface. However, my wife was thrilled with the CD slot, digging into her college music collection for trips down memory lane.

The system itself is easy to use and reference, thanks to four main menu shortcut buttons directly below the display. Plus, Hyundai provides knobs for commonly used radio and climate functions, though temperature adjustments are made via less desirable rocker switches. During a week packed with holiday trips into the city, the navigation map provided accurate reports about traffic clogs in and around Los Angeles, helping us to skirt the worst of them.

I’m also a big fan of the Santa Fe’s Infinity premium sound system, which includes Clari-Fi digital music restoration technology and punches above its weight in terms of sound quality. What’s particularly notable for 2018, however, is that Hyundai equips the Santa Fe with three free years of Blue Link subscription services, up from the previous trial period of one year. 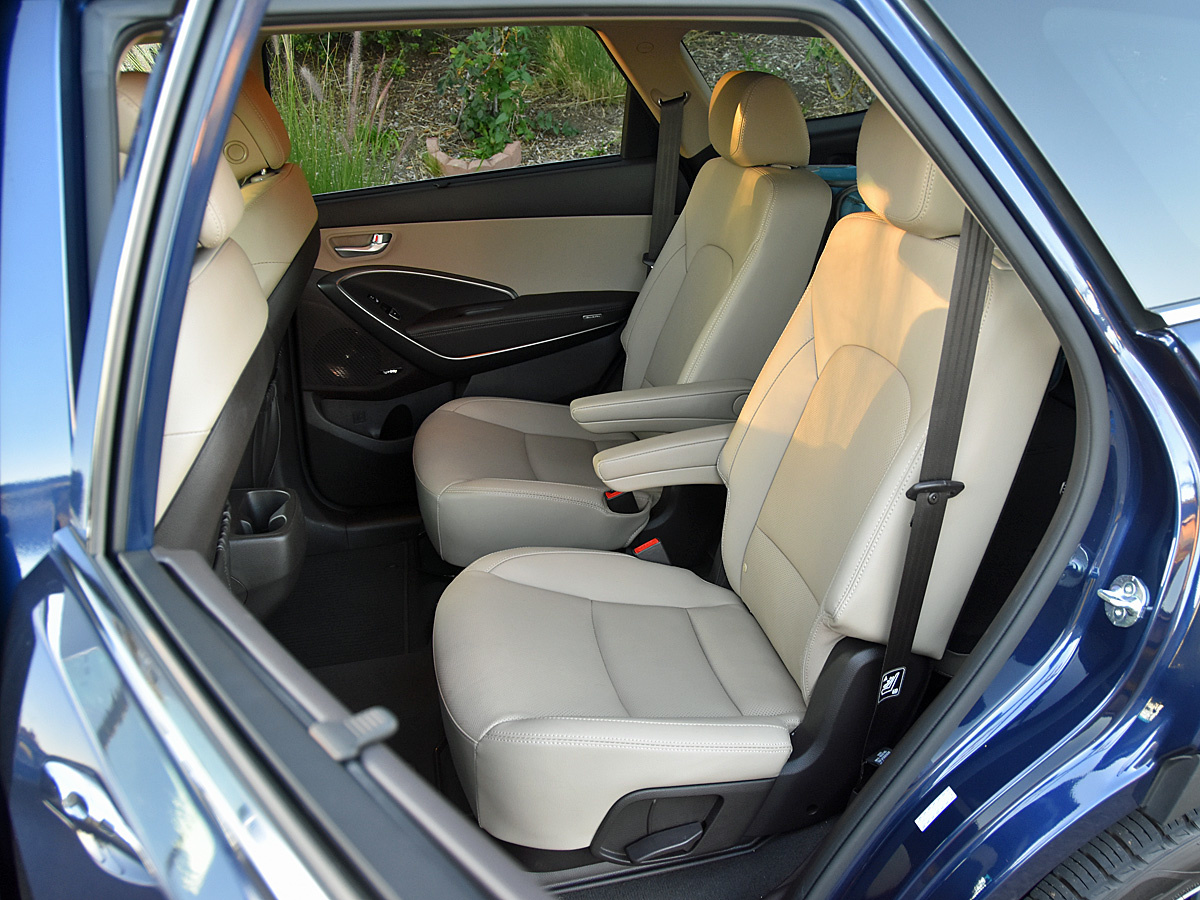 Among the many benefits of Blue Link are key safety features like automatic collision notification, SOS emergency calling, and safe teen driving settings related to speed, curfew, and geographic boundaries. You can even set up automatic text or email notifications to friends and family if you trigger your smartphone’s panic button.

My test vehicle also had all the driver-assistance and collision-avoidance systems that Hyundai offers for the Santa Fe. The automaker could stand to refine the adaptive cruise control's operation and replace the audible lane-departure warning with a tactile one, like a vibration through the steering wheel, but otherwise the Santa Fe’s collection of safety technologies is effective.

While we’re on the subject of safety, you need to know this: As of January 1, 2018, the Santa Fe is the only midsize, 7-passenger SUV to get a Top Safety Pick Plus award from the Insurance Institute for Highway Safety (IIHS). 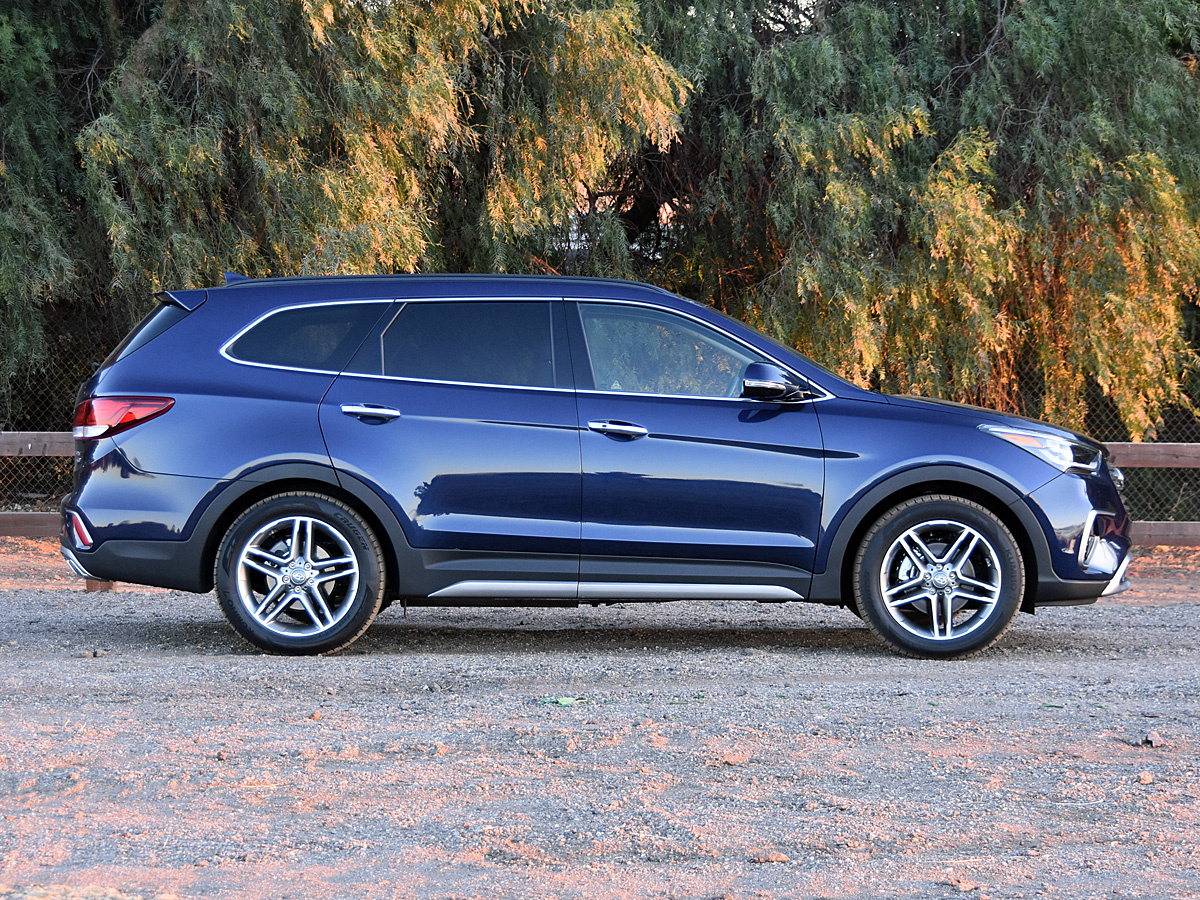 Hyundai regularly offers discounts on the already competitively priced Santa Fe, and they come in the form of subsidized lease deals, low interest-rate financing, rebates, and other dealer-side incentives that help lower the price you will pay.

Take these markdowns into consideration with Hyundai’s impressive warranty and roadside-assistance programs, and the increased free trial period for Blue Link services from one year to three years, and value is an inherent Santa Fe characteristic.

On top of these benefits, it delivers the safety and utility that families seek, combined with surprise-and-delight features that can make owning it a great experience.

Goldengirl36 I’m thinking about this suv but, your comments regarding the braking system throws me back into looking at something else. I just loss my brakes when driving my suv that was considered a safe and top of its class. So now I need a suv that delivers on safety and a braking system that is superior. My town has very many hills but, on the flip side, I don’t drive very much. Would you recommend the Santa Fe to a person like me under these conditions or should I look elsewhere?

Goldengirl36 Where is the Emergency Brakes located on the 2018 Santa Fe? Thanks

Have you driven a 2018 Hyundai Santa Fe?
Rank This Car

2018 Hyundai Santa Fe Randomly Shuts Off When I Brake.

Dealer can't find anything wrong. Happens regardless of temperature or how long I have been driving it previous to slowing to a stop. Try to go, and the engine shuts off. I have to put it in Park...

94 views with 3 answers (last answer about a year ago)

Does 2018 Sante Fe Have An Outdoor Winter Plug In?

Car plug in for winter

607 views with 3 answers (last answer about a year ago)

Fix For Sagging When Towing

I have a 2018 Santa Fe Limited Ultimate. I have already installed the hitch, 7 pin wiring harness, and brake controller. I am trying to address the sagging when towing. My understanding is that a...

72 views with 2 answers (last answer about a year ago)

I have the same problem since few days ago. When I check the time setting nothing works in there.

same here...will try the suggestions. Interesting that it happened to all of us!