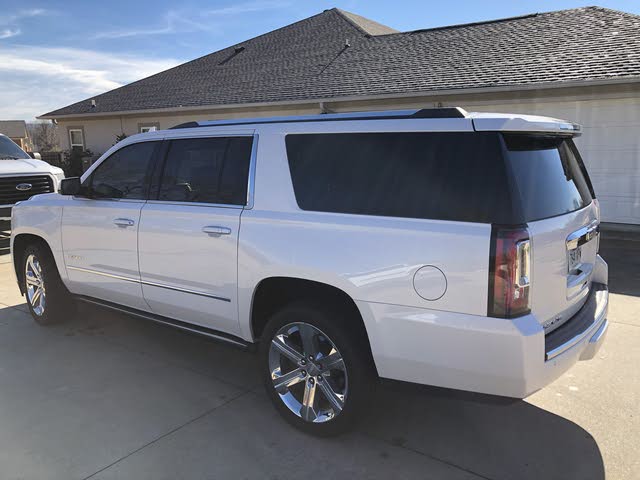 Average user score
5 ⁄ 5 stars
Based on 4 reviews
Review by LDC_1MP — This Yukon XL Denali has Everything! Traded in a Suburban LTZ & Got More with the Denali! Read more

The GMC Yukon XL—and the Chevrolet Suburban, upon which it’s based—is an ideal choice for those looking for a family hauler or a tow vehicle with ample space for cargo and convenience features for passengers. The Yukon XL is the extended version of the Yukon, with an additional 14 inches of wheelbase length and 20 inches of overall length that result in even more space. For 2018, the Yukon XL is expected to remain largely the same, at least on the lower end of the range. For the upscale Denali trim, however, a number of changes are in store—and since half of all Yukon buyers spring for the Denali, it’s an important update.

The first thing you’ll notice on the updated 2018 Yukon XL Denali is the restyled grille, which is flanked by high-intensity discharge (HID) headlights and LED signature lighting. The new grille provides better airflow the radiator for cooling, and behind it are active shutters that close when the car is at speed to reduce drag and improve fuel economy. Other changes to the Denali include a unique premium wood interior trim and a new 10-speed automatic transmission.

The Yukon XL Denali will still be powered by the familiar 6.2-liter V8 engine with an output of 420 hp and 460 lb-ft of torque. Instead of the old 8-speed transmission, the Denali gets a 10-speed automatic transmission developed jointly between Ford and GM that’s been making its way into models across both companies’ lineups. Fuel-economy figures aren’t out yet, but with the aerodynamic treatment up front and the new transmission it should be at least somewhat better than the 15 mpg city, 22 highway, and 17 combined achieved by the 2017 model.

Lower Yukon XL trims should still be equipped with the smaller 5.3-liter V8 engine rated at 355 hp and 383 lb-ft of torque. The Yukon XL can be had in either rear-wheel-drive (RWD) or 4-wheel-drive (4WD) configuration, although its length makes it better suited for highway towing than for climbing any serious terrain. For those with towing needs, available features include a tow/haul mode, hill-start assist, automatic grade braking, and trailer-sway control. The Magnetic Ride Control system borrowed from the Chevrolet Corvette is another option, as are large 22-inch wheels that look a bit more at home on the Yukon XL than its slightly smaller Yukon sibling.

As for features, the Denali is predictably the most impressive Yukon XL trim by a long shot—it comes with active noise cancellation, heated and ventilated front seats, heated second-row seats, a Wi-Fi hotspot, wireless phone charging, a power liftgate, and a premium stereo. Options include retractable side steps, a sunroof, a roof rack, and a rear entertainment system.

The 2018 Yukon XL remains a tempting choice for buyers looking for the cargo space and towing capacity of a suburban with extra luxury features. It’s slated to arrive at dealerships this fall.

Users ranked 2018 GMC Yukon XL against other cars which they drove/owned. Each ranking was based on 9 categories. Here is the summary of top rankings.

Have you driven a 2018 GMC Yukon XL?
Rank This Car

My 2018 Yukon XL is slow to start and seems to be a strain on the battery. I pulled into a battery store and the Battery test health state shows 91. Charging state shows 9 yet the alternator is work...

Has anyone added a fourth row seat to a Yukon xl in the 2015-2018 model? We are wanting to do it for occasional family visits but are unsure how to make it happen since the seatbelts are not instal...

I Notice On Some GMC Yukon Denali,s Car Gurus Lists An Appearance Package. ...

GMC Yukons with Denali upgrade has an appearance package listed on a few models I’ve been looking at. What does this include?

I have a 2018 GMC Yukon XL. We currently have the second row bench seat option, but we are looking for someone who would be able to provide us with the tan captain chairs for the second row. We wo...

129 views with 2 answers (last answer about a year ago)