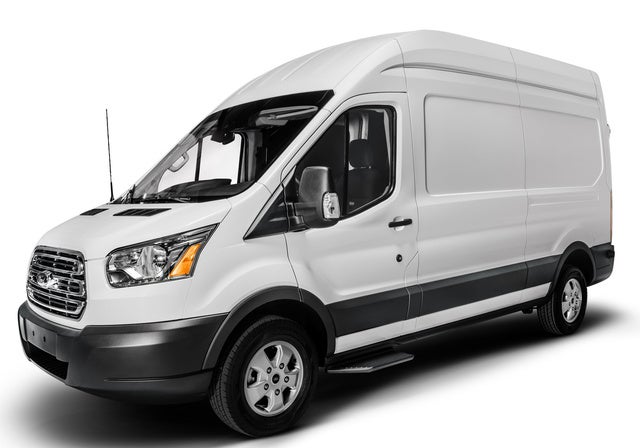 Average user score
4.5 ⁄ 5 stars
Based on 4 reviews
Review by Guru7XLTX — Great van. Rides smoother than my Chevy express. tough both vans are great. The 6 cylinder feels strong though II haven’t had a chance to get it loaded yet. I’m waiting on my Upfitters to set it up be... Read more
Review by James — Id like to see about buying this 2018 ford transit cargo Van Read more

It’s been a staple on British and European roads for years and years, but the Ford Transit Cargo full-size van wasn’t introduced in the U.S. until 2014. Its success across the pond has been mirrored in the States, however, as the Ford Transit has become not only the best-selling commercial van in the nation but the best-selling van overall. While also available in a Transit Passenger configuration, the Transit remains best known in its more business-oriented form—the Transit Cargo.

The 2018 Transit Cargo gains several new features, such a locking glove box, a new rear exit door handle, a rear LED cargo lamp, and the relocation of the handy reversing camera from next to the rear license plate to above the rear doors on medium- and high-roof models. New options include heavy-duty flooring in the cargo area, a rear scuff plate kit, longer running boards, power-folding heated mirrors, and D-pillar assist handles for medium- and high-roof models. These features are intended to further expand the Transit’s utility and make the already popular choice even more appealing to large and small businesses across the country.

The Transit Cargo comes in three lengths, two wheelbases, and three roof heights, and with a choice of either a rear liftgate or split rear doors. Trims levels include the half-ton 150, the three-quarter-ton 250, and the 1-ton 350. A 350 HD variant further adds dual rear-wheels and increases the payload capacity. Between these choices and the numerous available features, there are literally hundreds of ways to tailor your Ford Transit to your individual needs. The roomiest Transits come with almost 500 cubic feet of cargo capacity, but even smaller versions offer well over 200 cubic feet.

Under the hood of the Transit Cargo are several more options. The base powertrain is a 3.7-liter V6 engine rated at 275 hp and 260 lb-ft of torque, but buyers can upgrade to either a 3.5-liter EcoBoost V6 with 310 hp and 400 lb-ft of torque or a turbodiesel 3.2-liter Power Stroke inline 5-cylinder engine good for 185 hp and 350 lb-ft. All come with a 6-speed automatic transmission. Depending on the powertrain, maximum payload stands at 4,650 pounds and towing capacity is up to 7,500 pounds, and the transmission includes a separate tow-hauling mode. The Transit claims fuel-economy figures of 14 mpg city, 18 highway, and 16 combined with the base V6 and 15, 19, and 16 with the EcoBoost V6, although these numbers will vary depending on vehicle configuration and load. The Ford Transit also employs unibody construction, so it has a reportedly better ride than more old-fashioned body-on-frame haulers. Suspension is by MacPherson struts up front and a live axle with leaf springs in the rear.

With just the standard features, the interior of the Transit Cargo is fairly spartan—it comes equipped with vinyl seats, a vinyl floor, and front air conditioning. The customization possibilities, however, are limitless, whether you’re looking to haul wedding cakes or power tools. Options include power heated mirrors, cloth upholstery, and a 6.5-inch LCD touchscreen. Ford’s Sync 3 infotainment system with navigation is available and can be outfitted with Ford’s telematics system for fleet owners to monitor speed, location, and other vehicle data. Other add-ons include a power running board, upfitter switches, lane-keeping alert, and an engine-block heater.

The 2018 Transit Cargo expands the appeal of this utilitarian runabout with an even longer list of available features and configurations, to the point where there really is a Transit for everyone. Loading the Transit with options can get rather expensive, but with such a wide range of useful features, many buyers will likely be able to justify the extra cost as a business expense.

What's your take on the 2018 Ford Transit Cargo?

GuruD6QW9 I've always wondered if this comes from the dodge sprinter. yes or no? i do like the larger cargo area, 500 cf verses express 317 cf.

GuruV7HBW Bought new 2015 Diesel, Drives great! DEF troubles started at 60 k, DEF assembly had to be replaced. oil change is about $180.00 Don"t bother going to your local Ford dealer for help, they have no clue! Sensor"s go out all the time. The particulant filter both cats,stopped up at 120 K, $4000.00 later back on the road for about 100 miles. Flashing fuel filter stopped up. Changed it, 200 miles later check engine light on. Fuel rail pressure low service required. Transmission needs to be serviced, dealer does not have the equipment to transfer fluids, still waiting to here from Ford on transmission. If I can get the check engine light to clear and stay off I will trade it on a PROMASTER. Dissatisfied in Cullman Alabama

Users ranked 2018 Ford Transit Cargo against other cars which they drove/owned. Each ranking was based on 9 categories. Here is the summary of top rankings.

Have you driven a 2018 Ford Transit Cargo?
Rank This Car

I accidentally did a pending transaction to myself. How do I remove it?

I Want To Search The Whole Country For The Vehicle I Need. How I Do That

i want to do a search the whole country for the vehicle I need. I don't want to have to put in a zip code. How do I do that

Can I Use Vin # To Get Detailed Facts About A Van?

Can I get detailed facts about my van using Vin number