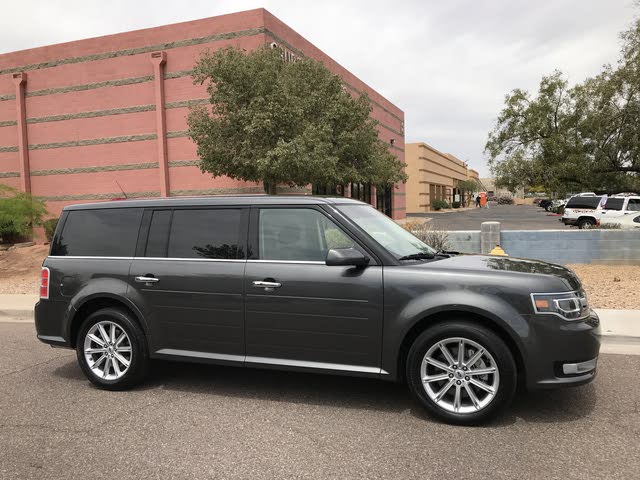 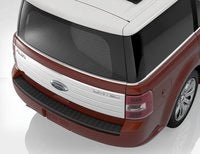 Automakers typically redesign their models every four to five years to stay fresh in the marketplace. The boxy Ford Flex crossover, however, is an outlier—it hasn’t been redesigned since it was first introduced in 2009, which means it misses out on some of the latest safety tech and fuel-economy improvements found in competitors. But the Flex does have some redeeming features that make it an interesting choice.

The Flex has always stood out from other crossovers due to its tall, boxy exterior design. While to some it’s reminiscent of a minivan, the Flex works hard to dispel that notion. The front end sports a large chrome bar integrated into the headlights and the “Flex” name in bold letters across the hood. Sculpted lines run along the sides of the doors, and other design elements include flared out fenders and wheels ranging in size from 17 to 19 inches. An optional appearance package makes the Flex look even bolder with blacked-out trim pieces and 20-inch wheels finished in gloss black.

The Flex’s boxy shape does pay off when it comes to interior space. No matter which of the 3 rows you choose, you’ll find an abundance of headroom. Both the front and second-row seats provide excellent legroom, although the third row is somewhat tight for adults. The Flex comes standard with seating for 7 passengers, while an optional set of second-row captain chairs will lower that to 6. The only downside are the seats themselves—the flat cushions don’t provide much support and will leave you aching after a long drive. Cargo space is surprisingly average for the class, with 20 cubic feet behind the third row, 43.2 cubic feet behind the second row, and 83.2 cubic feet with both rows folded. But the Flex does have an ace up its sleeve—its shape allows bulky items to fit with ease, and the front-passenger seat can fold flat for even more storage space.

Despite the Flex’s mid-cycle refresh a few years ago that included a revised dash layout, its interior is beginning to show its age. The Flex falls behind key competitors in some areas—material quality is only about average, with a fair amount of hard plastics used, and the center stack’s touch-sensitive controls don’t always respond when pressed. At least Ford has upgraded the infotainment system to the new Sync 3 system, which is a huge improvement over MyFordTouch in terms of both interface and performance. The available rear-seat entertainment system has been dropped for the 2018 model year.

All Flex models come standard with a 3.5-liter V6 engine mated to a 6-speed automatic transmission for an output of 287 hp and 254 lb-ft of torque. All trims come standard with front-wheel drive (FWD), although the mid-level SEL and top Limited trims have the option of all-wheel drive (AWD). A turbocharged 3.5-liter EcoBoost V6 with 365 hp and 350 lb-ft is available at the Limited trim level and comes with AWD. The majority of buyers will be happy with the standard V6 as it offers adequate power for most situations, although some reviewers note that it feels a bit lethargic when the Flex is filled with passengers and cargo. If you’re planning on carrying both on a regular basis, opting for the more powerful turbo engine might be a good choice.

When it comes to ride and handling, the Flex is a mixed bag. The suspension handles most road surfaces well but can’t fully absorb bumps and ruts on rougher terrain, which is exacerbated when the vehicle is riding on larger wheels. When going around corners, the Flex feels surprisingly flat and doesn’t show any sign of sway.

Standard safety equipment for the Flex includes anti-lock brakes (ABS), traction and stability control, a full complement of airbags, a reversing camera, rear parking sensors, automatic emergency notifications when the vehicle is paired with a compatible phone, and Ford’s MyKey, which allows the owner to set up a special key with limitations on speed, audio volume, and more. Blind-spot monitoring with rear cross-traffic alert is available on the SEL and comes standard on the Limited, while adaptive cruise control and forward collision warning with automatic braking are available at the Limited trim level. Optional for all trims is set of second-row inflatable seat belts. The Insurance Institute for Highway Safety (IIHS) has been the only group to fully crash test the Flex, where the 2017 model earned Good scores on most of the tests aside from the new small overlap front test, where it earned an Acceptable score.

Have you driven a 2018 Ford Flex?
Rank This Car

what is the recommended maintenance

In mini-vans and the new Ford vehicle, what's the best car to fit 6 adults for traveling comfortably?

Using Different Size Tires From What Is On Vehicle.

Rear View Mirror Has Writing Inside Of It?

My rear view mirror (2018 Ford Flex) has a barcode and some writing that appear only at night. Any ideas what this is and can I fix it?