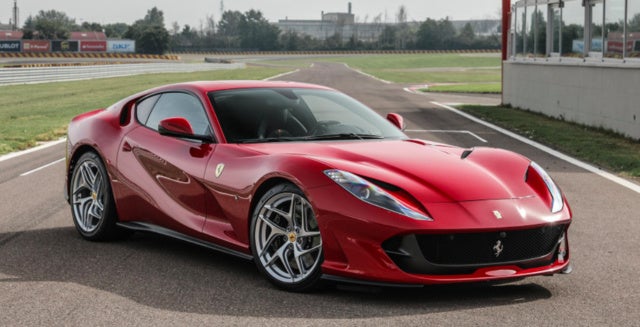 It’s a simple, almost juvenile name, but “Superfast” is just about the coolest moniker ever given to an automobile. The original Ferrari Superfast came in the 1950s, and the 500 Superfast was among the company’s premier offerings in the 1960s. Today, Ferrari has taken the name back out of the drawer for their latest large, front-engined V-12 GT car, called the 812 Superfast. As a replacement for the old F12, the 812 Superfast does use some of the old car’s components, but it is an altogether faster and more advanced automobile. On the European scale, the 812 makes 800 horsepower, which is where the number 8 comes from, and the 12 refers to the number of cylinders under its hood. The all-new 2018 Ferrari 812 Superfast starts at more than $300,000 for the standard car, which is more than good enough, but in true Ferrari fashion, the model offers amped up special editions to look forward to in the near future.

The 812’s engine is part old fashioned and part cutting edge. The V-12 is large at 6.5 liters and naturally aspirated in an age when most other performance car manufacturers have turned to small, turbocharged engines. At the same time, however, the engine is about 75% new compared to the old F12 thanks to a longer stroke and new crankshaft, connecting rods, and pistons. It also features larger valves, a more aggressive cam profile, and a new fuel system. All this translates to 789 hp and 530 pound-feet of torque, both of which come pretty high in the rev range, which encourages hard driving.

Ferrari claims a 0-60 time in just 2.8 seconds and that the 812 Superfast will top out at 211 mph. For those who live life a quarter-mile at a time, that distance comes in less than 11 seconds. Shifting occurs through the usual 7-speed dual-clutch semi-automatic with paddle shifters. The gear ratio is shorter than in the old F12, and Ferrari claims that shift times have been reduced by 30%, which is pretty impressive since shifts in the F12 already felt nearly instantaneous. A good, old-fashioned stick shift hasn’t been available in new Ferraris for a few years now, and the 812 is rear-wheel drive only. Big 12-cylinder engines are also almost always very thirsty, and most Ferrari buyers either know this going in or don’t pay much mind to fuel economy. Even so, the 812 is rated at 12 mpg city/16 highway/13 combined, which almost makes a large pickup look frugal.

Ferrari puts a lot of effort into engineering all aspects of their cars, so sharp and precise handling with a forgivable ride comes standard. However, with the 812, Ferrari has fitted electrically assisted power steering for the first time. The 812 is also reportedly well weighted and will likely only improve from here, and for a large, two-ton GT, it feels quite light on its feet. The 812 takes much of its aluminum frame from the old F12, and its rear-wheel steering comes from the high-performance F12tdf; however, the Ferrari Side Slip Control system has been updated for the 812. The scoops, flaps, and slits are all aerodynamically functional, and flaps at both the front and back of the car open up at 124 mph to stall the diffusers and reduce drag.

As one would expect of an all-new Ferrari, the interior is spacious and full of high-quality materials. It reportedly has good front and side visibility, and the instrument layout is familiar to owners of other recent Ferraris. There’s a giant tach in the middle with a scarcely believable 9,000 rpm redline, which is flanked by two digital configurable display screens, and the manettino dial is on the steering wheel. As opposed to the slightly more luxury-oriented GTC4Lusso, the 812 lacks a huge infotainment screen in the middle of the dash, but the it is available with a smaller 8.8-inch screen for the passenger to use.

The 812 Superfast is the latest in the long line front-engined V-12 GTs that harkens back to the company’s earliest days. While not revolutionary in any particular way, it’s a step in the forward direction and still a car to lust after - one that looks great, sounds great, and drives with the finesse of a much smaller car. It’s also nice to see that even as Ferrari adds some smaller turbocharged engines to their lineup, they are still stubbornly sticking with massive, fuel-thirsty V-12s in cars like this.

Users ranked 2018 Ferrari 812 against other cars which they drove/owned. Each ranking was based on 9 categories. Here is the summary of top rankings.